In the Victorian town of Stawell, a brick spillway by Monash Architecture students and Japanese artist Hiroshi Nakao, straddles the realms of architecture and landscape. Appearing as a “slice through an ancient brick ruin, either ageing gracefully or half built,” it reflects the rhythms of human occupation.

Steps, niches and platforms provide for walking, climbing and sitting.

Thinking back on the countless models slaved over during university, only to be tossed into the skip at year’s end, I’m envious of the opportunity presented to the students at Monash Architecture. Over the last four years the Design-Make studios have taken on groups of twenty or so willing students, pairing them with visiting lecturers and industry professionals to make meaningful contributions to the public realm, responding to community needs or enriching public spaces, something practising architects fall over themselves to achieve throughout their careers.

The program started in 2009 with the Kinglake Community Shelter, a temporary seating area, BBQ shelter and performance space for a community devastated by the Victorian bushfires in the same year. Silvia Acosta and Adrienne Benz of Rhode Island School of Design, alongside local practitioner Ross Brewin, helped steer the community engagement process and the creation of this robust and utilitarian suite of pavilions, built using donated LVLs and repurposed timber pallets and providing a much needed social space within the government-funded Kinglake Temporary Village.

In 2010 the Observatory Project was constructed at Monash University’s Clayton campus. Local practitioners Damon van Horne of Grimshaw Architects and Jeroen Hagendoorn of Hassell led the project, creating with the students a timber structure exploring the interaction of natural light with built form. Corners of the building were sliced away, sections of floor were elevated and the structure was “reversed,” with the timber boards lining the interior to expose the balloon frame, architecturally tracing the sun’s path. Here sunlight occupies the space and is the instrument to investigate the inside/outside dialectic. In the words of Gaston Bachelard, “intimate space loses its clarity, while exterior space loses its void.”1

The third studio, in 2011, resulted in the Sealight Pavilion, installed in Melbourne’s Docklands under the design direction of Sami Rintala and Dagur Eggertsson of Norwegian practice Rintala Eggertsson. Built using recycled wharf timbers, the pavilion provided a point of repose for locals and an interpretive structure of the Docklands condition for visitors, who were asked to navigate a narrow portal through a gracefully expanding tower form before gaining access to a blinkered view of the water’s edge.

Monash Steps/Stawell Steps, by Hiroshi Nakao and Monash Architecture, is the fourth and most ambitious Design-Make project to be realized. The project stems from the Victorian floods of 2011, in which a large number of towns in central and western Victoria experienced flash flooding and the failure of infrastructure to cope with the vast volumes of water. Stawell was not spared. Its much loved former mining pit turned Olympic swimming pool turned human-made Cato Lake broke its banks, flooding local homes and sports grounds. The Northern Grampians Shire Council formulated plans for a dedicated spillway to direct floodwater into an adjacent basin.

With the addition of government funding, donated materials from local brick manufacturer Krause Bricks, the guidance of two local retired bricklayers and funding from the Country Education Program for students who lived within the Stawell community during the build, the project was given the green light. This started an intense four months in which two months were spent conceiving and refining the design and, incredibly, only two months were spent in construction.

The design process for the studio group referred initially to Rosalind Krauss’s “expanded field” theory, exploring how the object in the landscape is philosophically positioned by its relationship to defining opposites of landscape, non-landscape and architecture, non-architecture. Krauss writes that “much of the strongest work will reflect the condition of the logical space.”2 This project has done so, finding home on the field as a “site construction,” naturally straddling the concurrent demands of architecture and landscape by reflecting both the rhythms of human occupation and the hydraulic engineering requirements defining its use.

Differing from the landscape manipulations of the “marked site” approach by artists such as Robert Smithson, and the architectural axiomatic structures of Sol LeWitt, the site construction area on the expanded field was explored by abstracting the landscape through architectural intervention. The obvious one, given the building material to hand, was the step. Amassing a library of examples, including Indian stepwells, ziggurats and the Laurentian Library entrance, the group explored solid/void relationships with two-dimensional brick rubbings and by stacking and removing bricks within a defined boundary, creating varying steps, niches and platforms to modulate the experiential possibilities of walking, climbing or sitting. Using a truckload of bricks, again donated by Krause Bricks, this work culminated in a full-scale prototype built for the project exhibition in the MUMA courtyard.

Situated on the western bank of Cato Lake, the realized form appears as a long, linear slice through an ancient brick ruin, either ageing gracefully or half built under the Arcadian sequence of trees. As the visiting architect/artist Hiroshi Nakao states in his illuminating manifesto for the project, “We always stand at the half landing, because we have created steps like the ruins that are impossible to tell whether in collapse or construction.” The project comprises two lengths of timber bridge deftly spanning dual brick spillways, laid in complex horizontal “steps” that will create new shorelines as the lake levels rise and fall.

The bridges are divided by a Piranesian plinth of brick platforms, a haptic play space which has no easy way in – one must climb onto and into it and the feeling of transgression is palpable when leaving the path (something my greatly excited three-year-old son didn’t suffer from in the slightest). Small surprises abound. A laser-cut representation of Stawell’s main streets has been turned into a drain grate. Linear lengths of “pitched” bricks run like rivulets of trickling water toward the lake. Nifty brackets hang the bridge off structural handrails at mid span and ensure the existing path levels are maintained, critical for the neighbouring nursing home residents who enjoy being wheeled around the lake. Most, however, are found when exploring the complex niches to find just the right one in which to read, sunbake, snooze or the thousand other things people will dream up. The sense of this being built by non-professionals is evident only in a rare mortar joint or two, which on a typical construction site may not have passed muster, but for this project is something to be celebrated, telling of the process and of how much the students, many of whom must have laid their first brick on this job, have learnt. 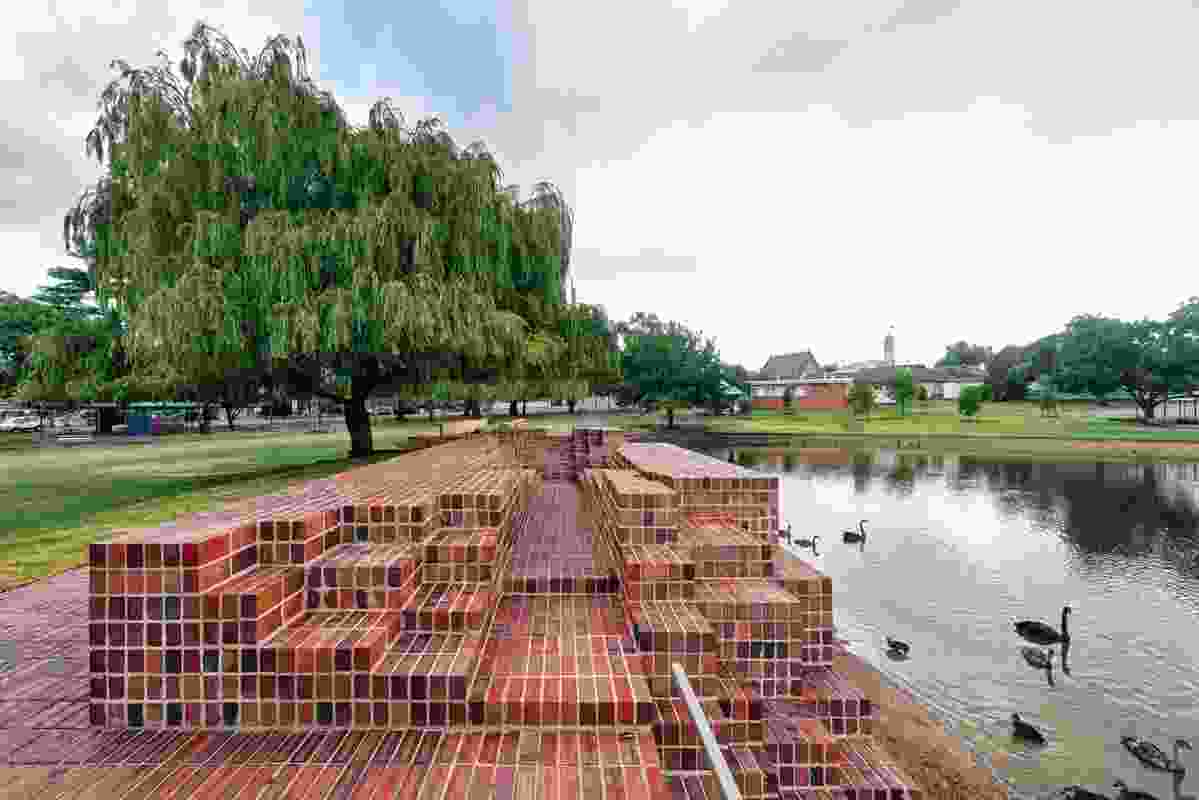 Steps, niches and platforms provide for walking, climbing and sitting. 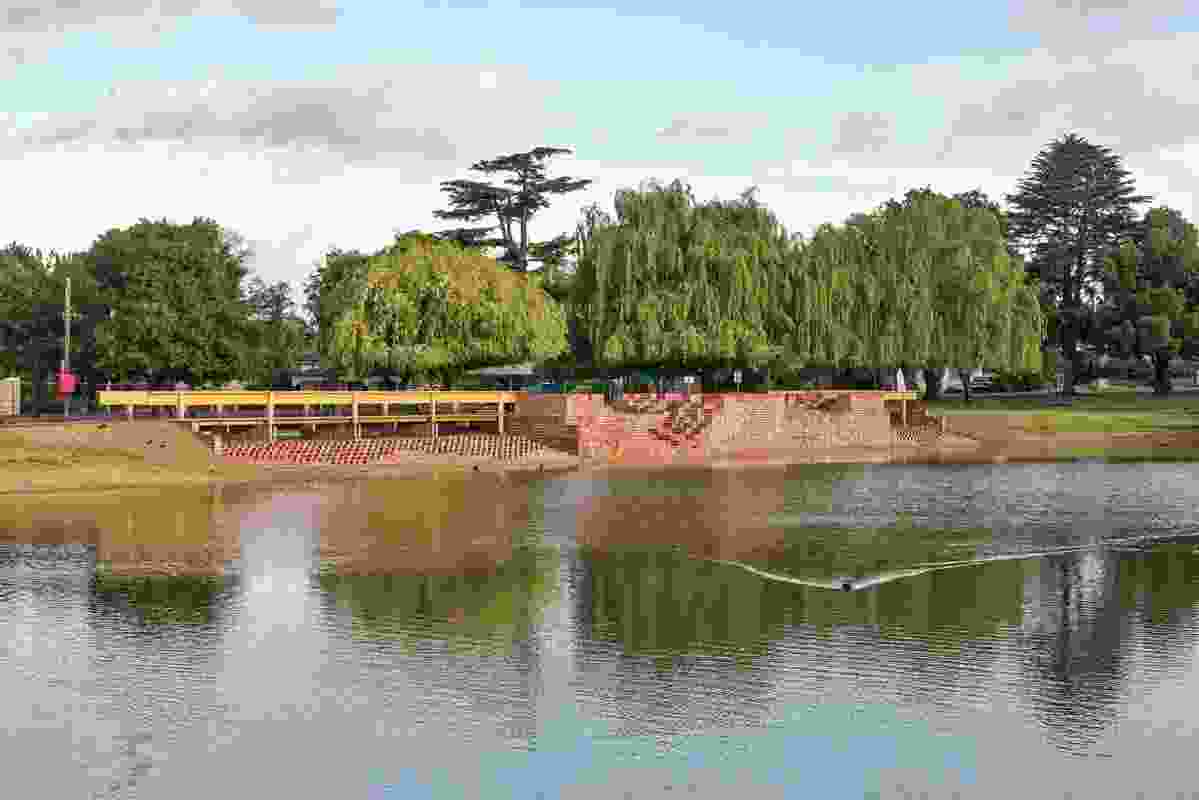 Lengths of timber bridge maintain the level of the existing path. 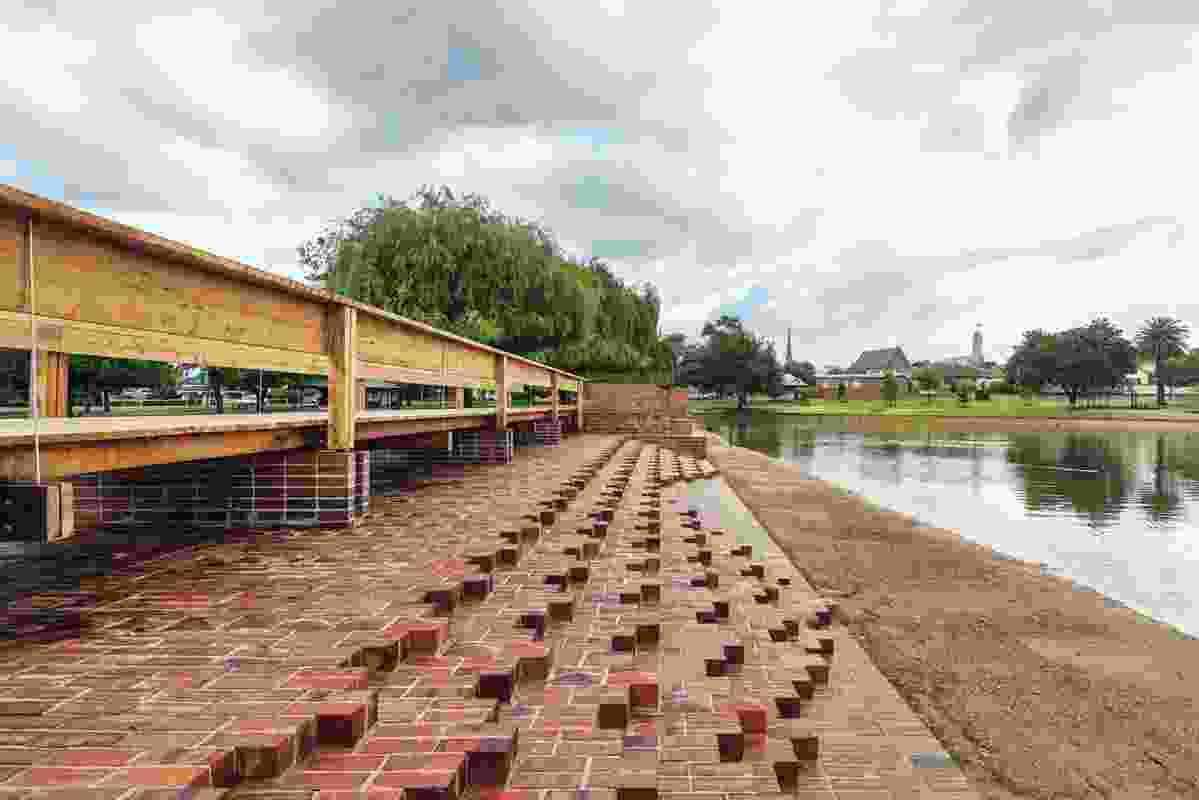 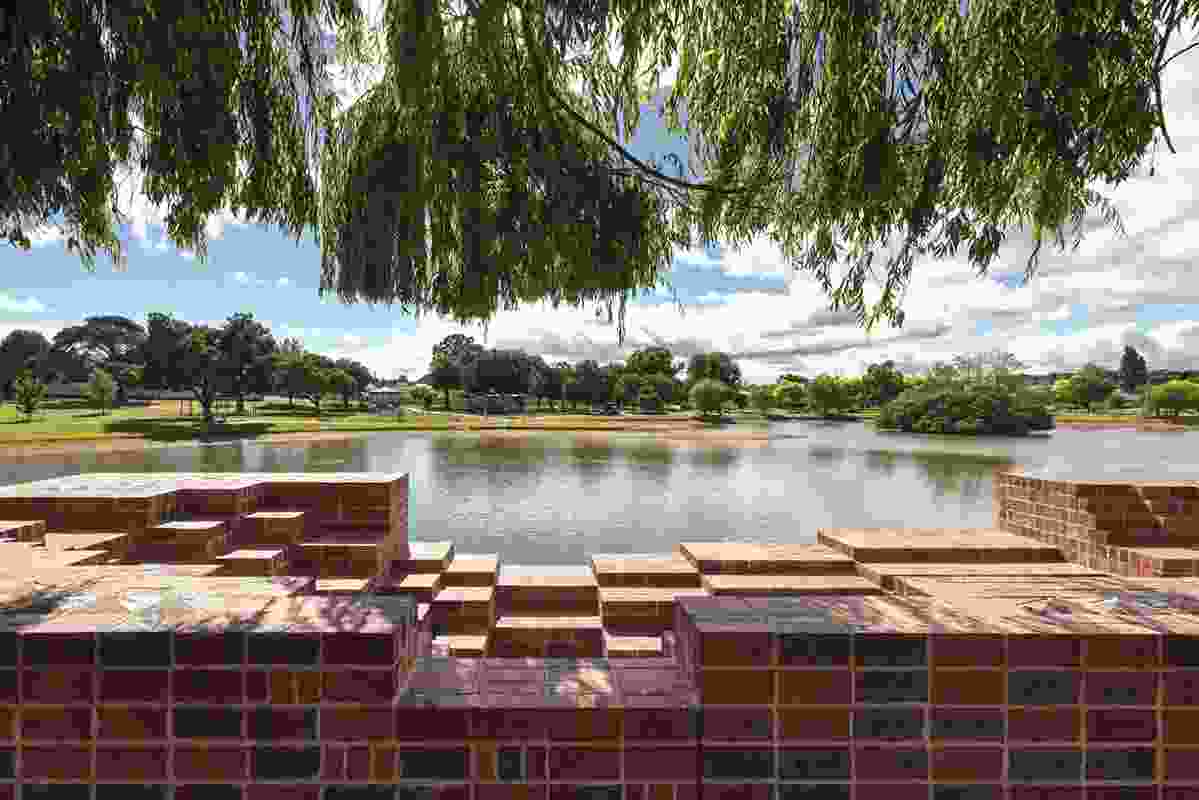 The view is framed by the voids in the brickwork and the willow tree. 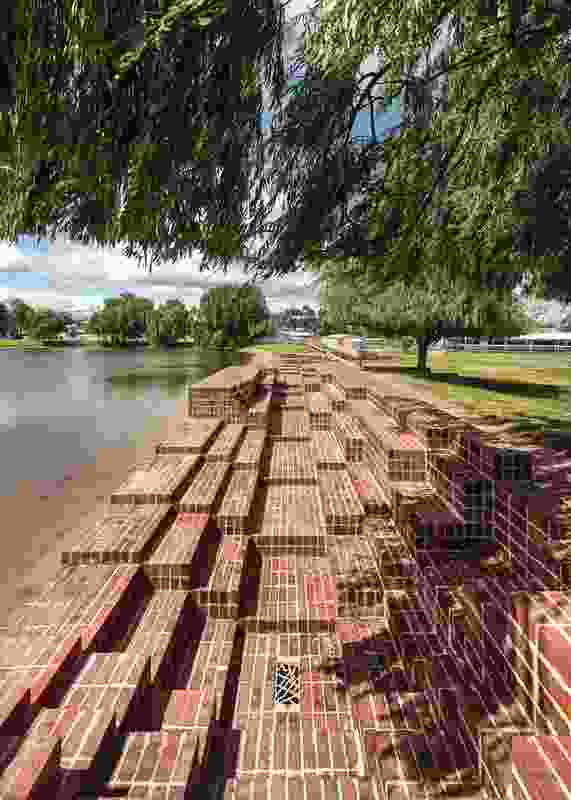 The bricks provide opportunities for walking, climbing and sitting. 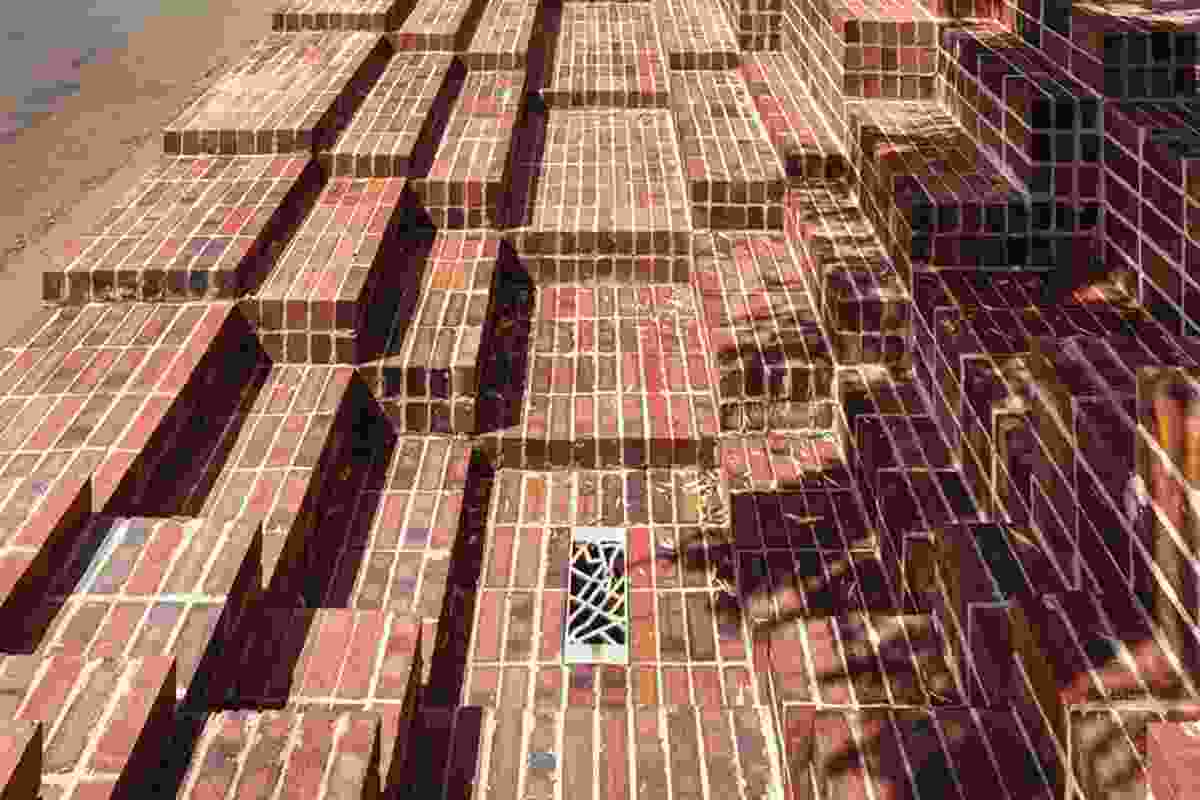 A laser-cut map of Stawell’s main streets used as a drain grate. 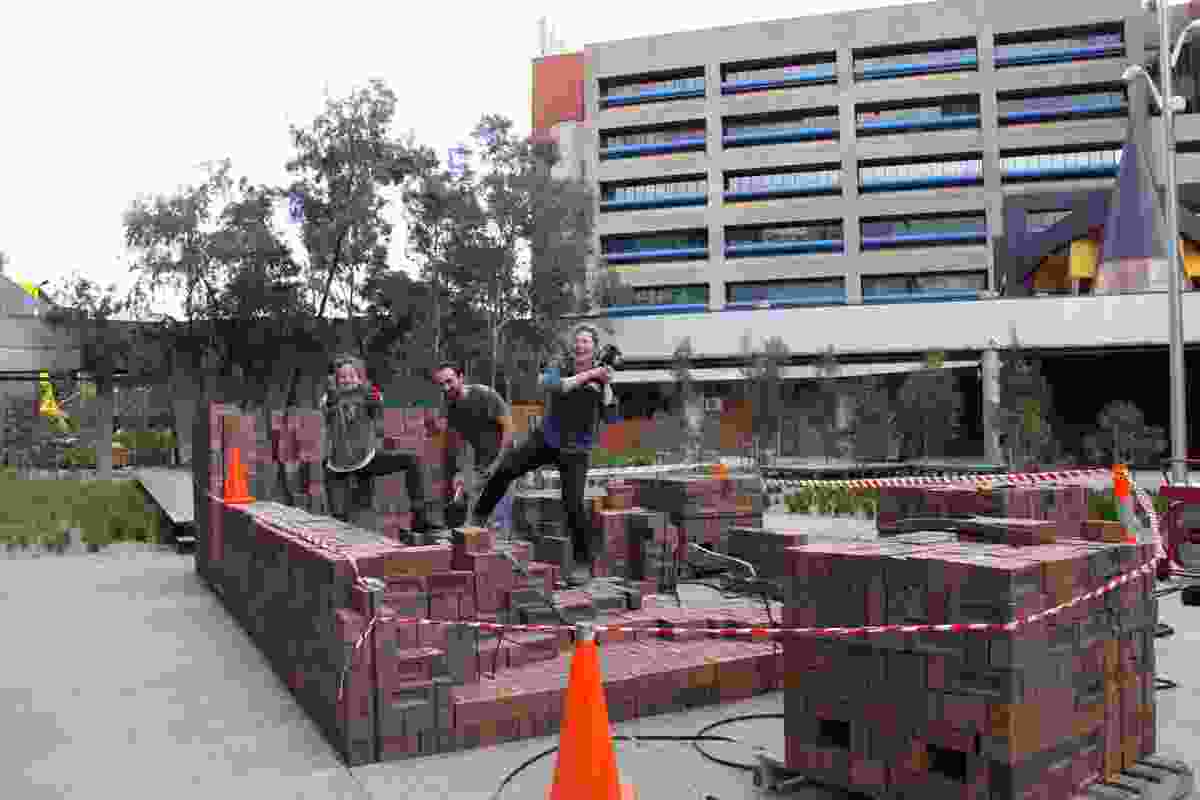 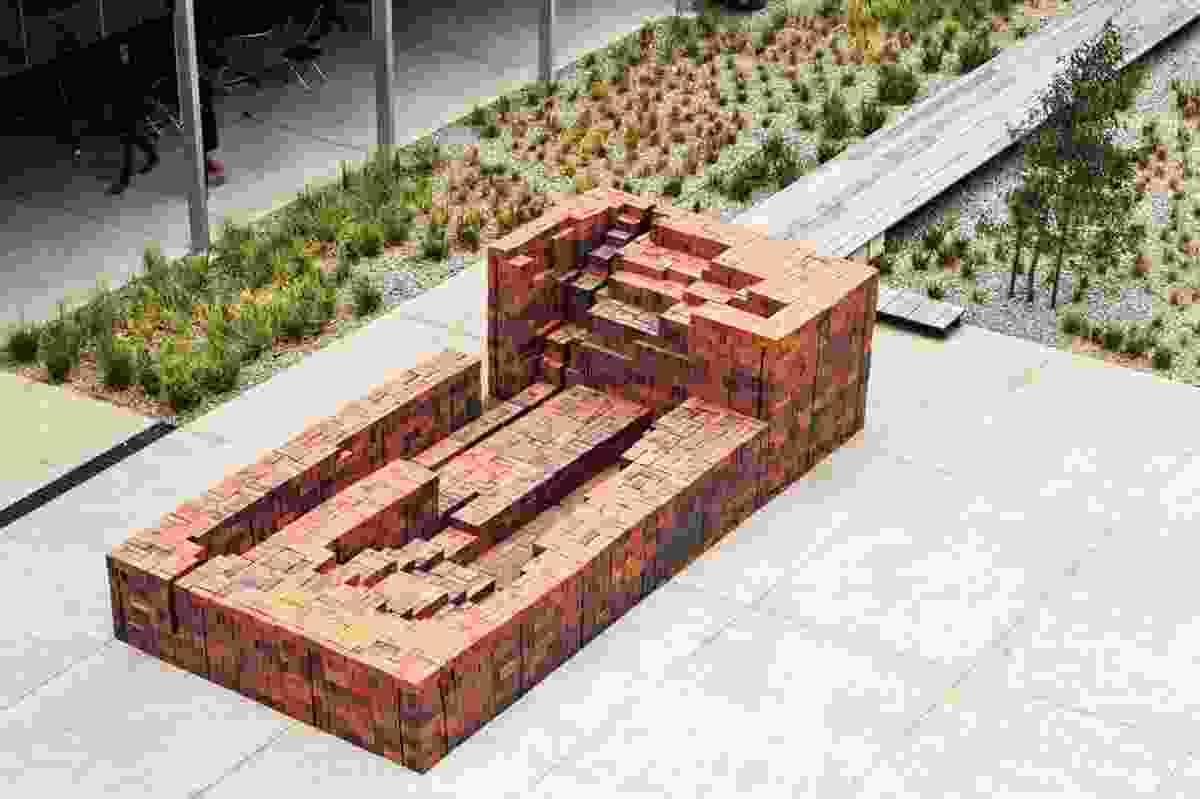 The completed full-scale prototype in the MUMA courtyard. 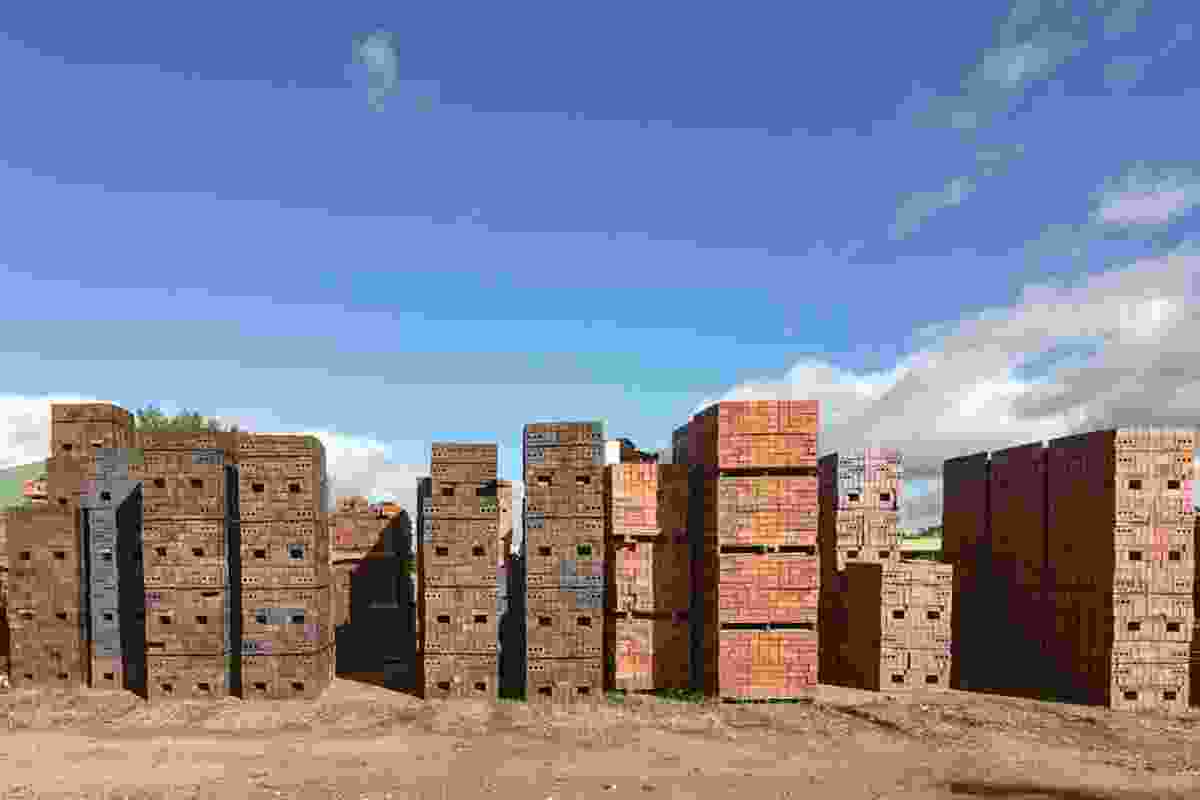 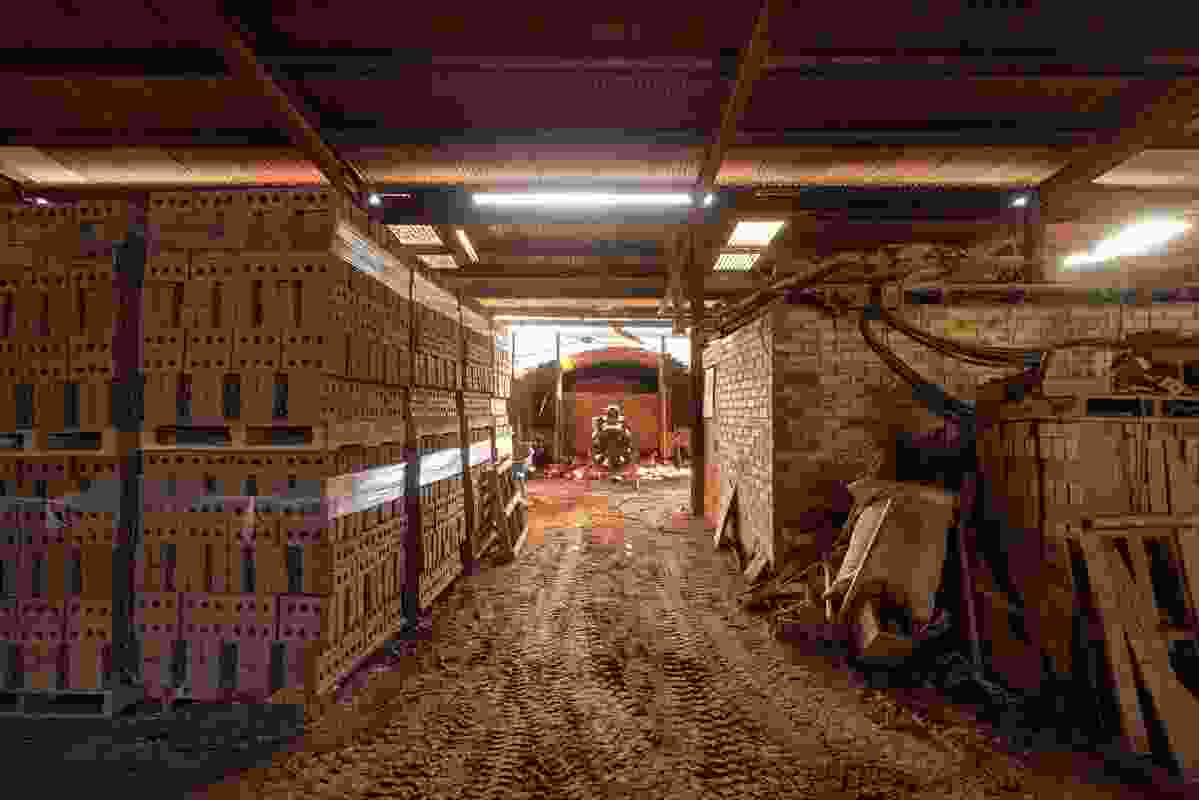 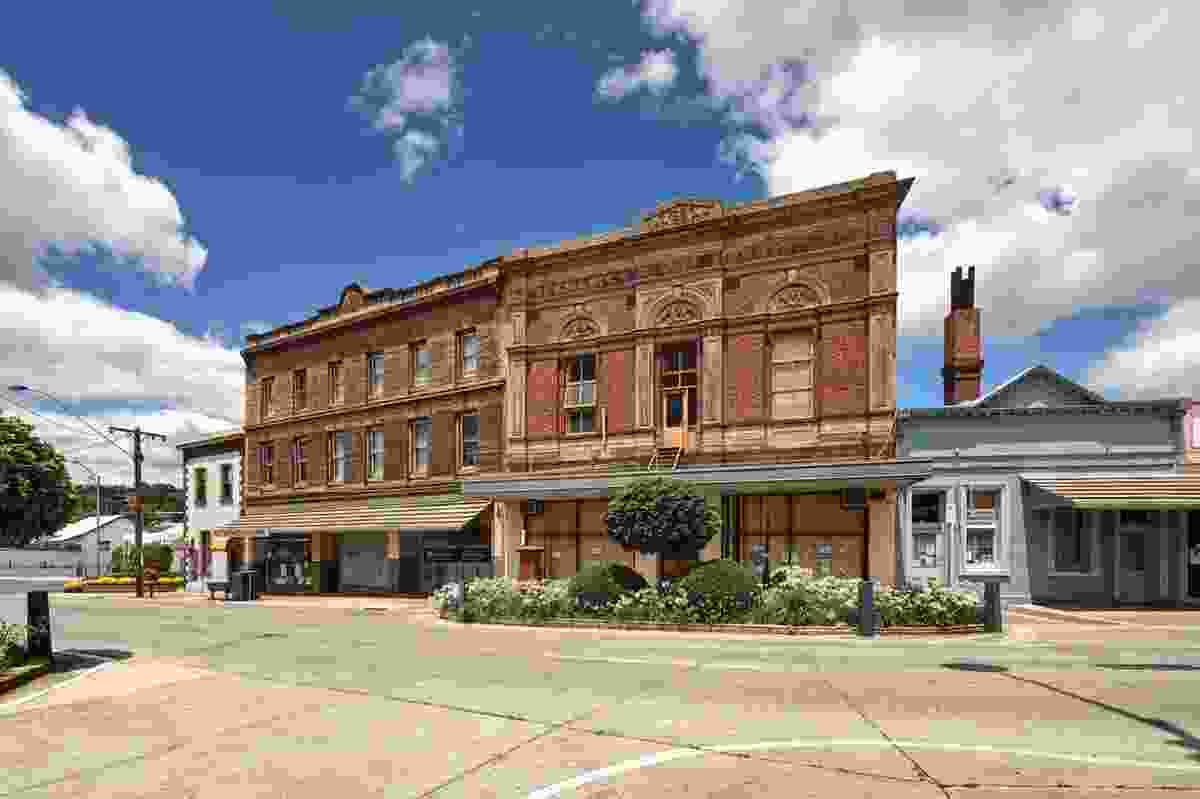 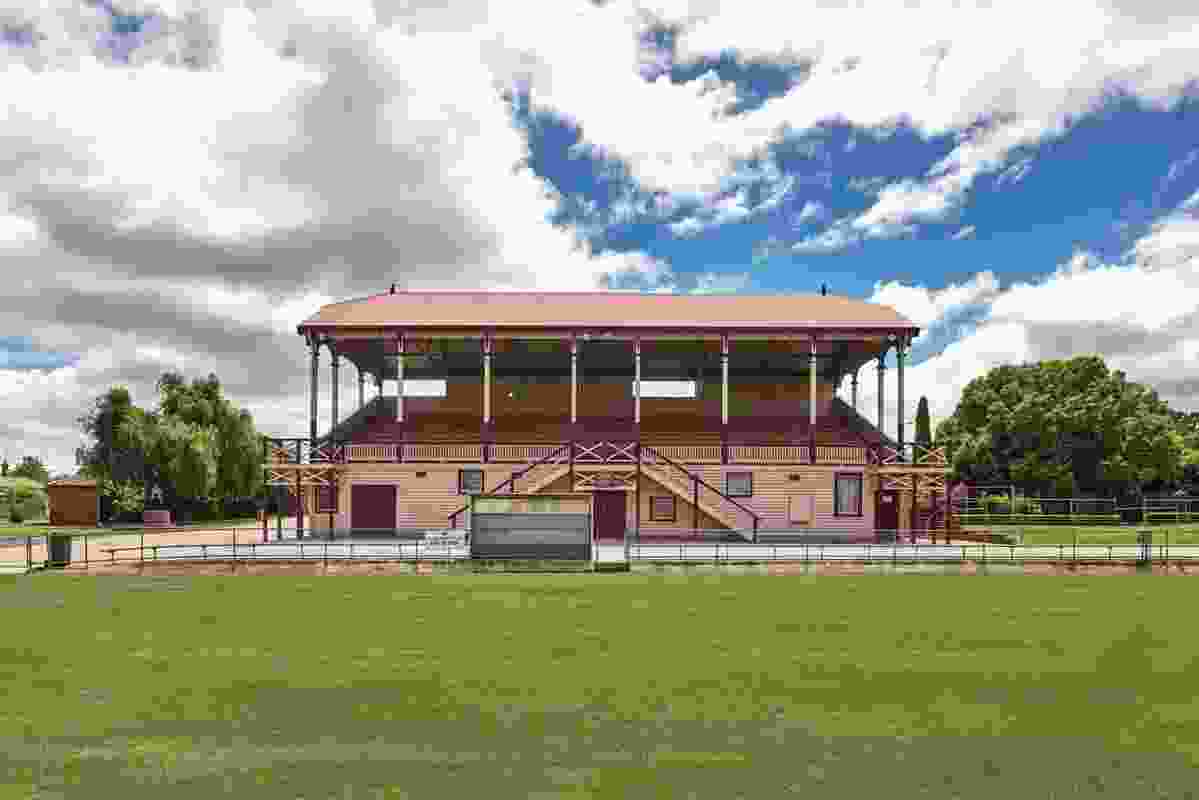 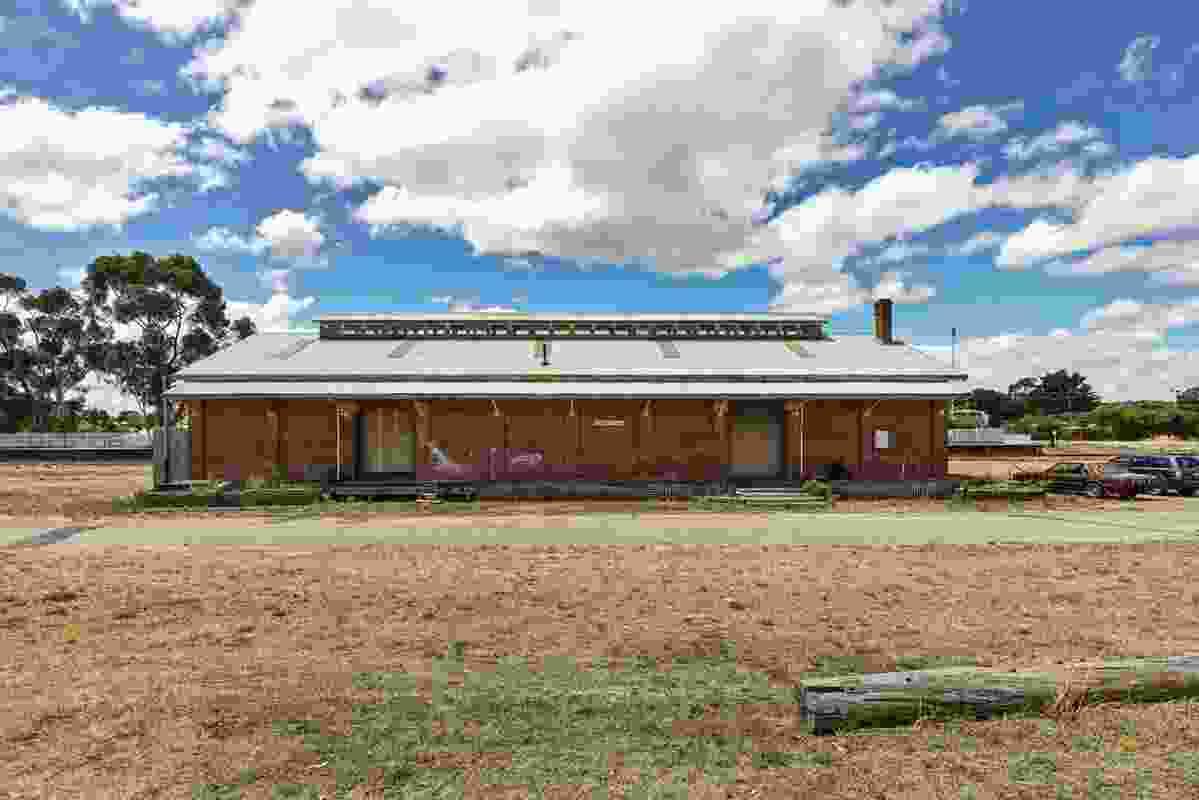