Denton Corker Marshall’s Visitor Centre is an ethereal counterpoint to the enduring presence of Stonehenge.

Two boxes – one clad in glass, the other in timber – stretch beneath a thin, undulating canopy.

The Stonehenge Visitor Centre has been anticipated for about a century – that is, since the first attempts to move or close off the main arterial road that passes close by the world’s most substantial extant Neolithic construction. By 1992, the car and bus park with various temporary buildings that littered the site was seen as a national disgrace and a competition for a visitor centre was won by Edward Cullinan Architects, but to no avail. Following a number of reports and a series of architectural competitions, Denton Corker Marshall’s (DCM) building finally opened to the public in December 2013 to mild enthusiasm, which was rather lost in a controversy over a substantial hike in ticket prices. The response from the British architectural press has been somewhat grumpy – praising the building with a faintness that is discernible. Hugh Pearman compares it to “a particular type of very superior French motorway service station” in the RIBA Journal, adding, “That is no disgrace.” “Good enough, considering …” is a summary of what I heard in a pub poll of colleagues. But the building and site planning are better than that and the British reception of the design of the Visitor Centre seems to me to be jaundiced by failed commitments to earlier competitions and significant compromises in the brief and budget for the building now completed.

DCM, along with the client English Heritage, proposed a principle of “reversibility,” which meant minimal foundations and excavations into a site of ongoing archaeological interest.

DCM won invited competitions for the project twice, first in 2001 and again in 2010. The 2001 brief had a less sensitive site further away from the stones, allowing for a substantial building with four times the budget that was eventually made available. This project failed to go ahead because it also involved tunnelling a great length of the main road, at huge cost and with protracted disputes as to the siting. The recently completed building and its site planning, on the other hand, were briefed to be “modest” – with the A303 road still in place; with a site relatively close to the stones, making it difficult to place a building discreetly; and with a modest building budget of £6.9 million (AU$12.6 million1). DCM, along with the client English Heritage, proposed a principle of “reversibility,” which meant minimal foundations and excavations into a site of ongoing archaeological interest, and DCM extrapolated this requirement into a formal contrast between its building and the monumental site it serves. As Barrie Marshall writes of the design in the press release: “Where the stones are exposed, massive and purposely positioned, the centre is sheltered, lightweight and informal. And where the stones seem embedded into the earth, the centre rests on its surface.” There have been comments that the Visitor Centre ought to have been more monumental in some way, but such complaints really need to be addressed to the client and the commissioning process, the size and relatively insubstantial nature of the building being determined by the brief and site. How successful DCM has been in making a lightweight architecture that has sufficient decorum in this place so over-determined by its recent and ancient history is an interesting question to consider.

The Visitor Centre consists of two “boxes” under a parasol roof with external circulation. A glass box contains the cafe, the shop and a classroom education centre. A timber-clad box serves for the display of artefacts and interpretive audiovisual presentation. This bifurcation leaves a central zone for ticketing booths and a view through to the road plied by kooky Land Rover-styled trailers pulled by Land Rovers that take most visitors to the stones two and a half kilometres away, just out of sight over the brow of a hill. The building manages to be this simple by placing the services and staff facilities in a long, low, timber-clad ancillary building that sits some distance away behind trees and that also hides the coach parking. The roof of the main building is an irregular aerofoil that mimics the rolling, sheep-grazed hills and, by narrowing to a leading edge, also refers to the site, which is named for an early aviation accident as “Airman’s Corner.” The siting is subtle. It is constrained by the need to keep the building invisible from the stones, which has been met by its position in a hollow and its very thin roof. Yet it also has its own drama, with a dramatic first view of the whole from the crest of the approach road, and a clear framing forecourt of lawn, chalky soil and clumps of trees, made possible by splitting the car and coach parking either side of the building. Diversity of access to and from the building is perhaps the most radical aspect of the design, making the most of the circulation exterior – while the roof covers 2,800 square metres, the enclosed volume is only 1,500 square metres. The arrival foyer and access between the pavilions is exterior, the ticket queues are barely undercover and even the toilets open directly onto the brisk and eventful weather of Salisbury Plain. The architects and English Heritage think it is logical that the building offers only a light amelioration of the exposure that visitors experience on the higher rise where the stones stand. External access is partly a strategy to put more of the budget into the build quality, but it is also a necessity because of the varying amplitude of the flow of visitors. Briefed for five to six thousand visitors daily, during the December opening the building coped with one thousand per hour.

The strongest image one has of the building, inside and out, is of the 211 slender steel columns that support and tie down the billowing roof. The number of columns reduces the depth of the foundations required, and in their uneven intervals and slight lean in differing directions they allude to the trunks of forest trees. The wave of columns appears to respond to the undulations of the roof and certainly the relatively subtle swell of the roof would look timid had it been dropped onto more rationalized uprights. The glass- and timber-clad boxes under the roof are also set at slight and apparently arbitrary angles. This purposeful irregularity marks the building as an intentional piece of architecture with its own form of seriousness that is not merely a contrast to the stones. But it is also this irregularity that will date the building stylistically, reminding us already of the turn of the century, when a certain planned randomness was a popular way for architects to express their discovery of complexity. Perhaps the placement and slant of each column has been calculated as a contribution to torsional rigidity, but it looks to be largely metaphorical and judged by eye, and this is the more productive way to understand the building and what allows it to be more persuasive in person than it appears in photographs. The centre does not seem jaunty and wilful, as it might easily have done, and there is a kind of calm and not overstretched homology of the roof and the landforms, the columns and trees and fence posts, that brings together the building and landscape. It is also, in general, very nicely detailed. The complex structure of the roof tapers to a single sheet at the edge, with some of the fine columns meeting this flush like the tie-downs of a tent fly. The edge of the roof is perforated, which shows its thinness, but the intended appearance of the leaves of a tree canopy, somehow crudely pixelated, stretches the metaphor a little too far.

It was quite brave of English Heritage to want contemporary architecture, when vernacular humility – perhaps in dry-stone walling and slate – would have told a more easily accepted story about us and them.

It was quite brave of English Heritage to want contemporary architecture, when vernacular humility – perhaps in dry-stone walling and slate – would have told a more easily accepted story about us and them. How immersed would one want to be in a Neolithic landscape, how much could a visitor centre evoke the facts of continuity without fantasies of identification with people of whom we know relatively little? The Land Rover train delivers the tourists who have paid their £13.90 (AU$25) to surround the stones, snapping away forgetting to turn off their flashes, while the everyday traffic of commuters and trucks on the A303 get quite a good look for free and every now and then the ground shudders when the helicopters of the nearby military base pass low overhead. DCM’s Visitor Centre judges well what architecture can and cannot add to the mundane tasks of ticketing, feeding and lavatories. It is not overly deferential to its uses, but neither is it pompous in taking the occasion to make architecture. The idea that the building might one day need to be removed when funds are found to tunnel the road and replan the entire site is quite unlikely, and speaks of timidity, but it has given the project a rationale that unfolds powerfully in the design. This is a building that subtly manipulates a complex landscape and some mundane functions with a light elegance that is imbued in its fabric and its jointing, just as the more weighty and important matters of a barely understood ancient society and a forgotten cosmology are there in the first rings of lintels.

1. Currency conversions calculated in May 2014. 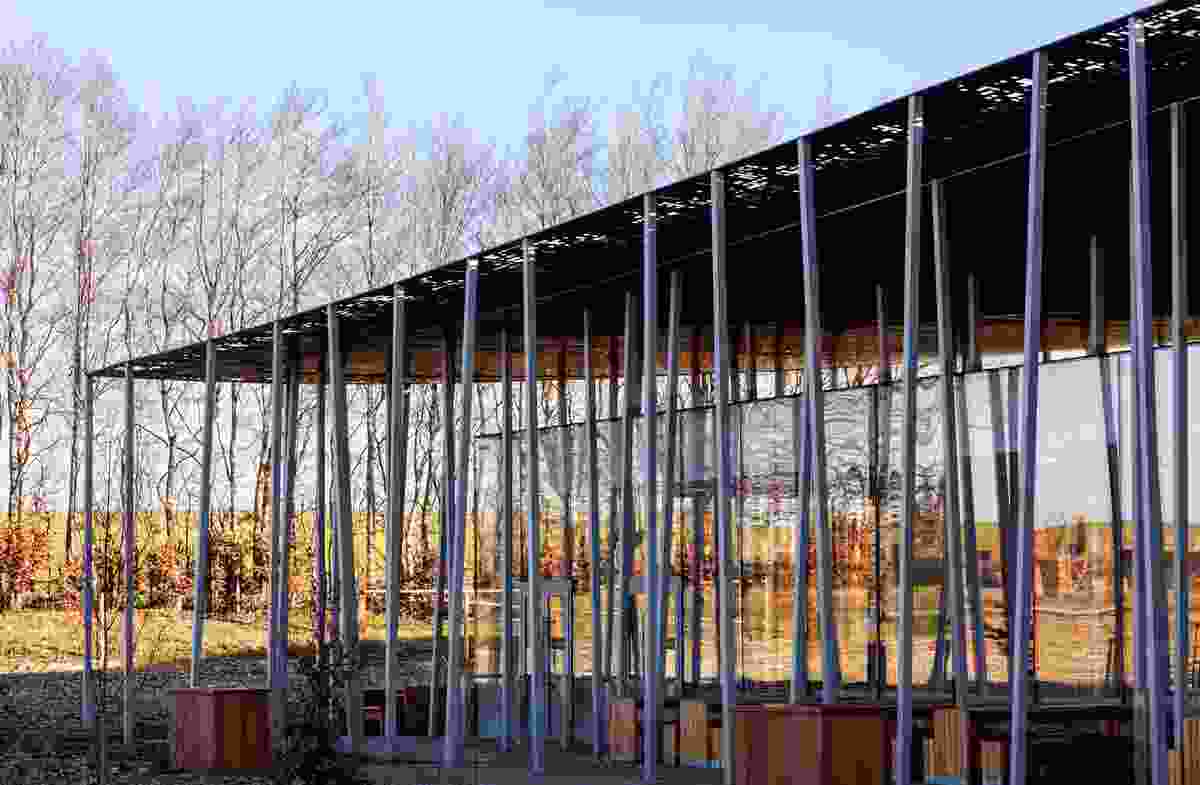 Two boxes – one clad in glass, the other in timber – stretch beneath a thin, undulating canopy. 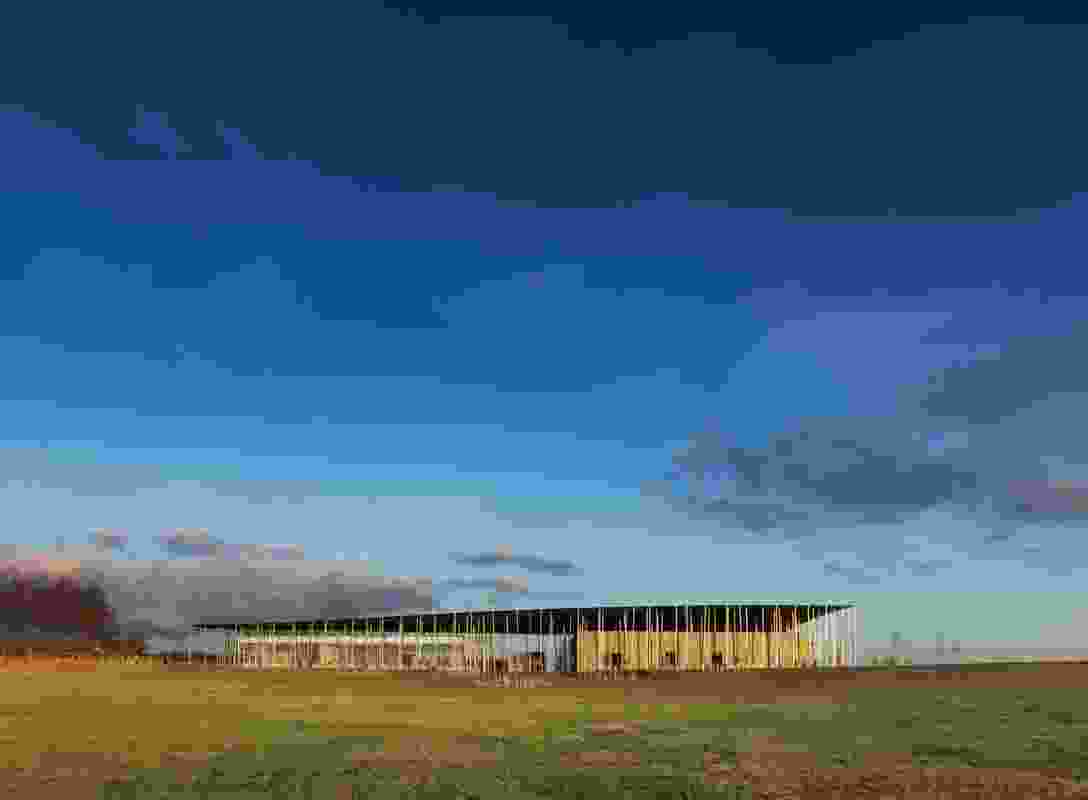 Denton Corker Marshall’s Stonehenge Visitor Centre is sited low to the ground in a hollow, two and a half kilometres away from the monumental site. 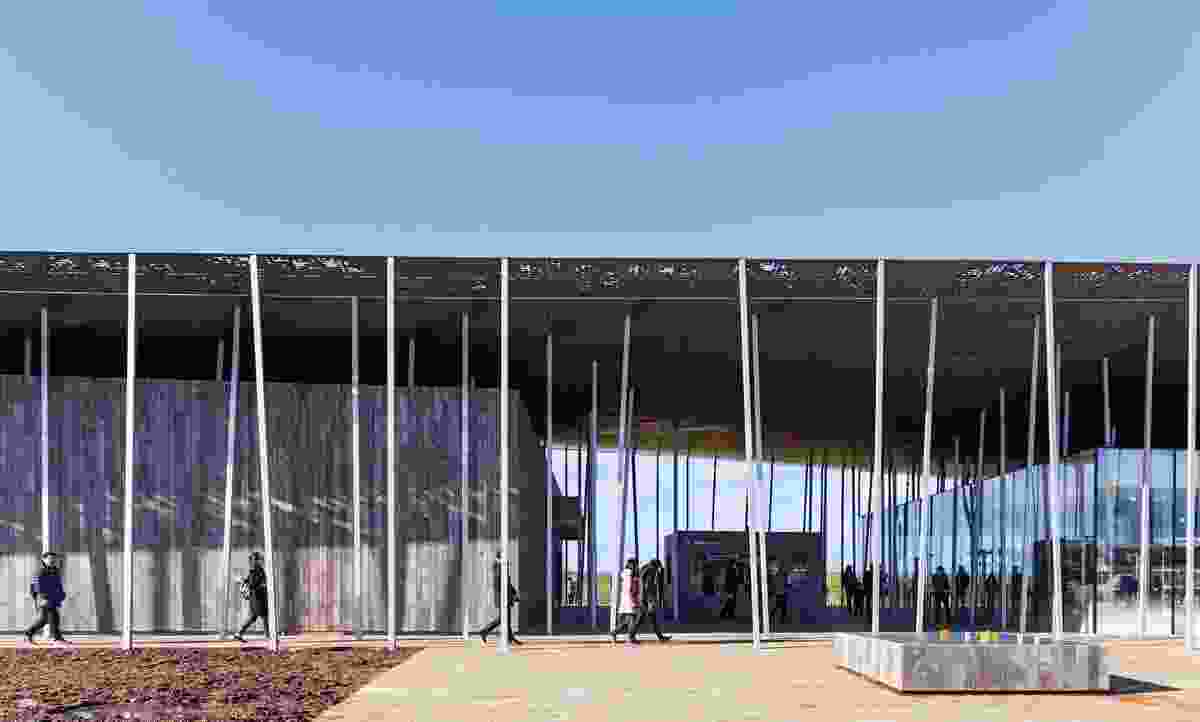 Arrival spaces, ticketing and access between the two volumes of the Visitor Centre are sheltered by the canopy roof but otherwise left open to the elements. 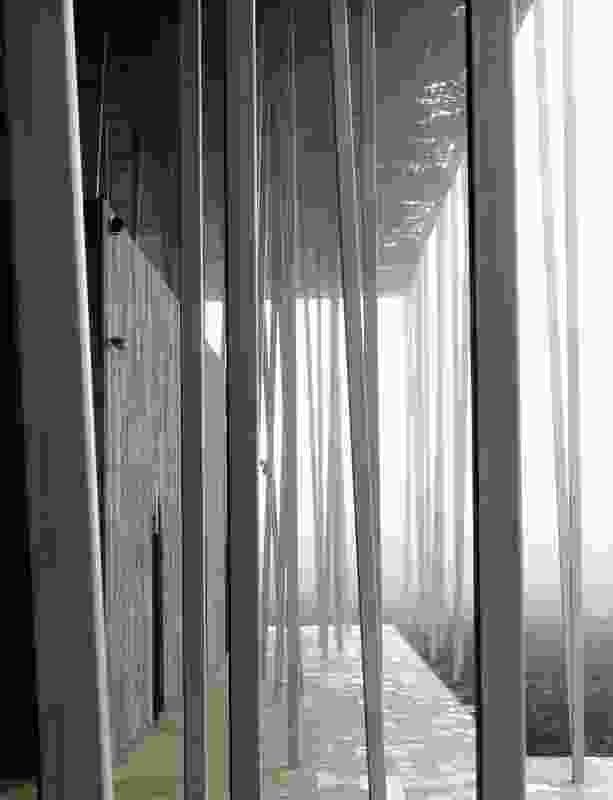 A sequence of 211 slender steel columns, pitched at different angles, lends the building its visual identity. 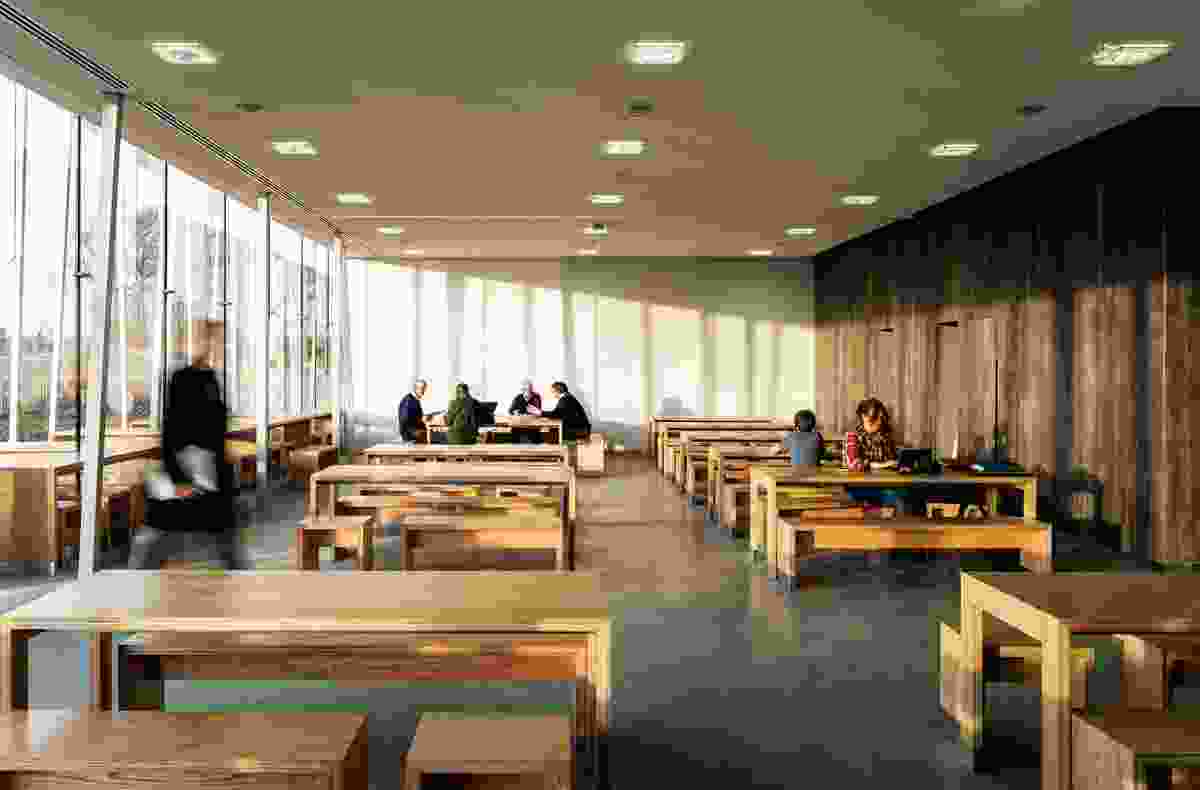 The interior spaces are spare and elegant in deference to the ancient history of the site. 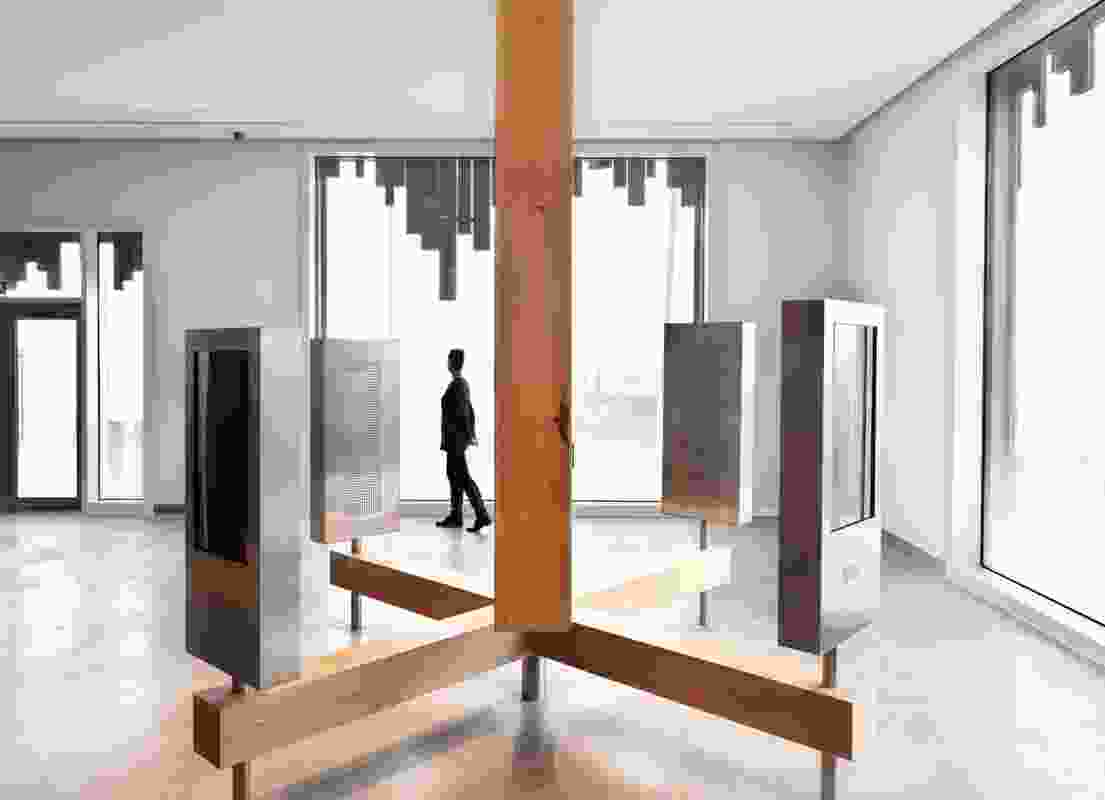 The museum space, housed within the timber-clad box.