Well versed in designing for the tropical Queensland climate, the architects have collaborated to deliver an exuberant South Stradbroke Island holiday home for the owner and her four grandsons.

On the northern verandah, netted hammock seats lean in unison with the architecture, appearing to float over and into the landscape.

South Stradbroke Island lies to the north of the Gold Coast, Queensland, forming a twenty-one-kilometre-long stretch of sand that divides the Broadwater from the Coral Sea. Largely a conservation park, South Stradbroke Island has a rich cultural and ecological history, preserved by virtue of its relative isolation in the absence of bridge and barge connections to the mainland. Stradbroke House, designed by Gabriel and Elizabeth Poole Design Company in association with Tim Bennetton Architects, is one in a scattering of island dwellings concentrated at the southern end of the island, just a short stroll from the calm shores of the Broadwater.

Gabriel and Tim’s command of lightweight construction, using custom steel fabrication, is a predilection well suited to the constraints of building in a harsh and isolated environment. Stradbroke House was conceived as two steel-framed pavilions linked by a breezeway and serviced by water and power generated on site. The western pavilion – a single storey with an open plan – unites living, kitchen and dining areas, and extends outward to a deep northern verandah. The eastern pavilion comprises two storeys and accommodates bathing and sleeping. On the ground floor, the exterior walls of the twin rumpus rooms fold down to create four, canvas-roofed sleeping pods. Upstairs, three conventional bedrooms are connected to the ground floor, rather unconventionally, by means of both an internal staircase and an external water slide.

Stradbroke House embodies Gabriel’s trademark lyricism, expressed through the structural rhythm of steel portal frames with raking arms, which extend beyond the roofline like tent poles stretching in tension. It is this succession of white masts that first appears through the tree canopy as you approach the site via the sandy beach track. Their image, combined with the ephemeral quality of the building, is reminiscent of Gabriel and Elizabeth’s Lake Weyba House (1996). However, Stradbroke House is a building realized under a very different set of circumstances. In order to streamline transportation and construction processes, walls and roofs were clad in simple sheet materials – compressed fibre cement and zincalume, respectively. Concrete floors establish the house as a more grounded version of earlier kin, but are somewhat disguised by encircling verandahs, which give the impression that the building floats over the landscape.

The home’s architecture is most exuberant along the home’s northern edge, with openings tuned to a coastal, subtropical context and feathered edges fashioned for shade. Sliding glass doors at the lower level and aluminium roller doors above maximize the facade’s openable surface area. “The garage door system was first used on Lake Weyba House,” Gabriel explains. “It gives you an enormous amount of light and ventilation in summer. In winter you can roll them down and with a northern aspect they [absorb warmth from the sun and] act as heaters.”

Complexity is injected through bespoke components, including the verandah awning and hammock seats, which are both supported by leaning steel columns. The awning comprises a series of aluminium angles laid on webbing and stretched between purlins. It is slung with a casualness that belies the importance of its role as a sunshade device – its sweeping curve reaffirming the ephemeral nature of the whole. Below the awning, the verandah is cast in half-light with the glare from the intense Queensland sky tempered. Netted seats, stretched between purlins, invite one to pause on the edge of the verandah and to lean in unison with the architecture.

The nostalgia of camping is emulated in the sleeping pavilion by its canvas-roofed sleeping pods and outdoor bathroom. The fold-down bedrooms were developed by the design team in order to minimize the building’s footprint, as prescribed by planning restrictions. This inventive solution, however, was driven equally, if not more so, by poetics. The sleeping pods give a sense of ownership to each grandson, inviting him to sleep beneath canvas, mosquito net or sky. The opportunity to engage with the natural qualities of the setting returns with the ceremony of bathing in a walled garden.

In the context of Gabriel’s distinguished career and decade-long partnership with Tim Bennetton, Stradbroke House supports a shared and continued interest in the pursuit of innovation and fulfils an agenda to build sustainably and conscientiously. The house is a masterclass in the problem-solving demands of architecture, overcome through the mutual trust between Lori and the exceptional design team. Equally poetic and pragmatic, Stradbroke House possesses the rare and opposing qualities of impermanence and longevity. 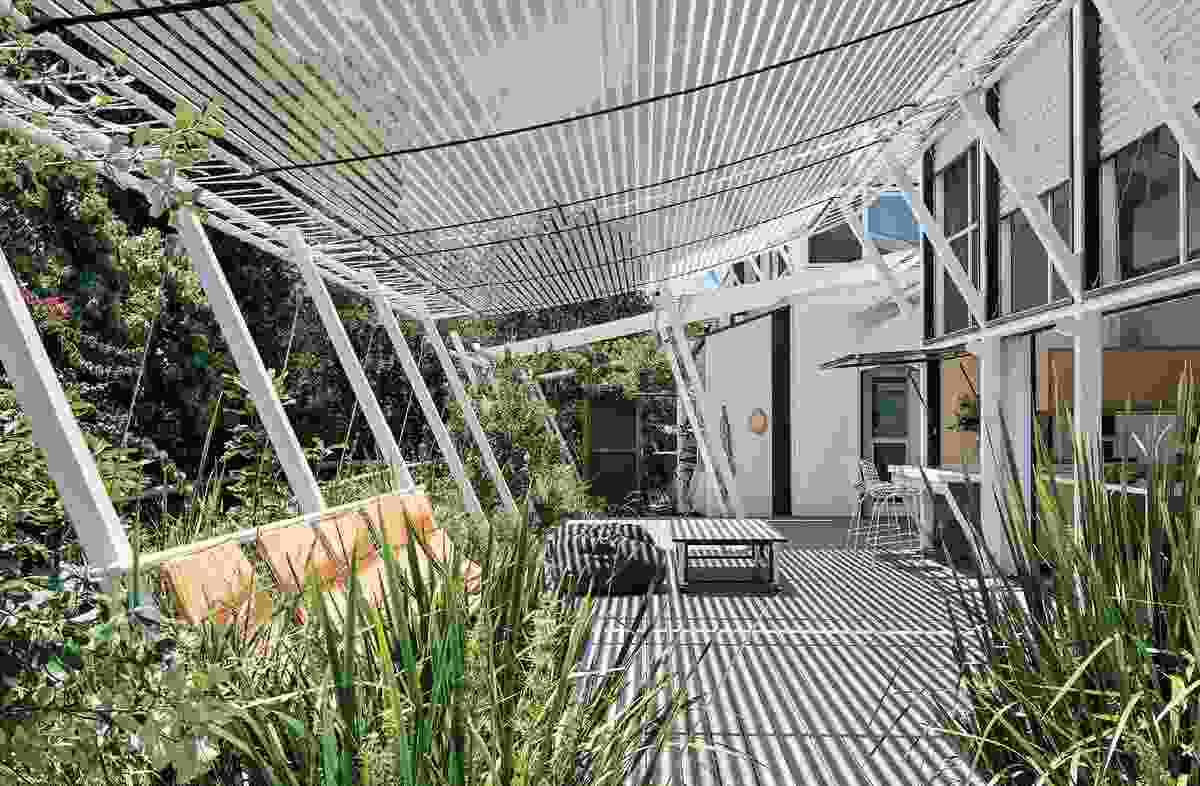 On the northern verandah, netted hammock seats lean in unison with the architecture, appearing to float over and into the landscape. 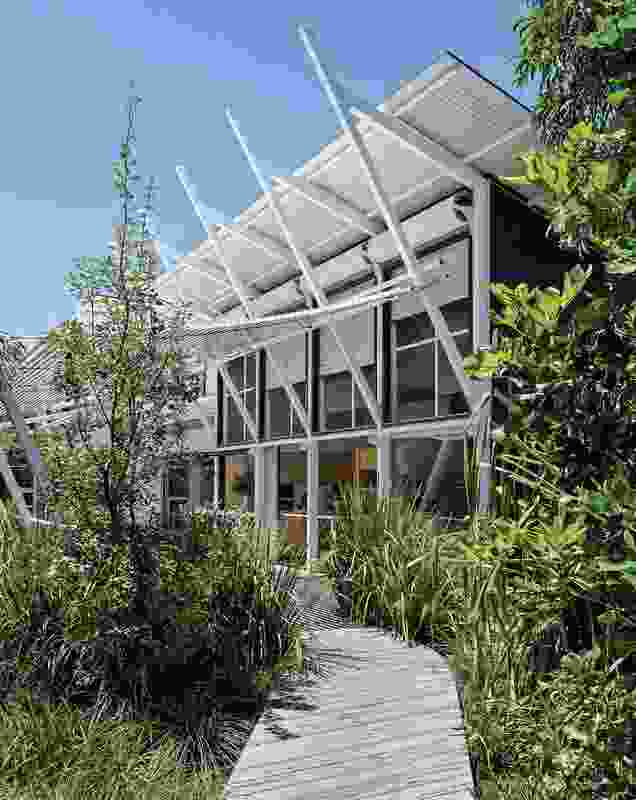 The architects’ honed command of lightweight construction was well suited to building on the relatively isolated South Stradbroke Island site.

Encircling the western pavilion, the verandah becomes a breezeway between the home’s two wings. 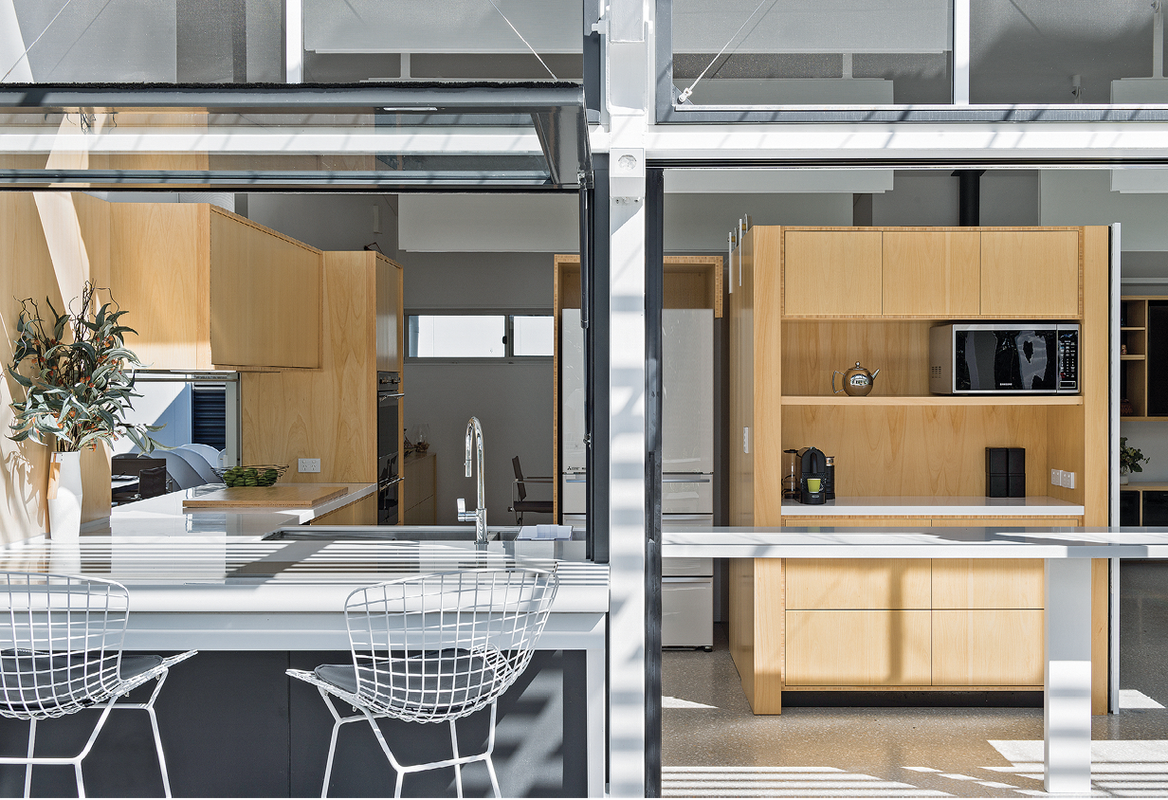 The home consists of two steel-framed pavilions: one, a double-heighted space, unites kitchen, dining and living areas and extends to the deep verandah. 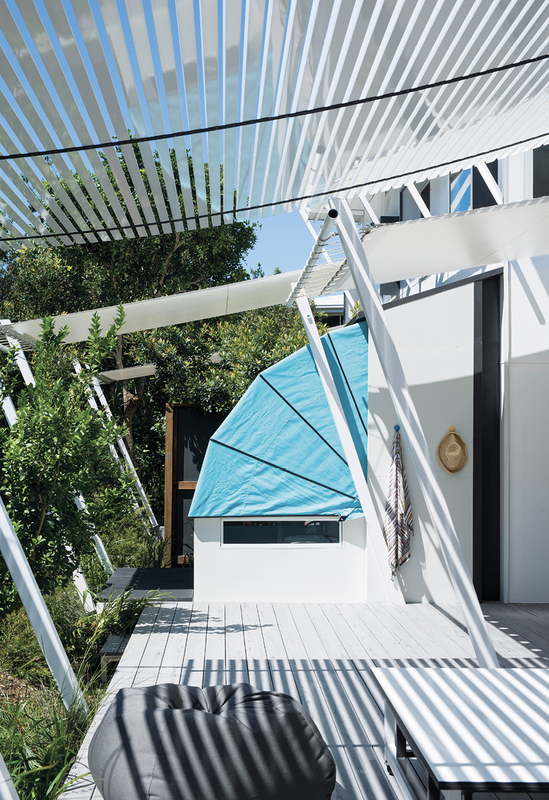 The arrangement of sliding glass doors at ground level and aluminium roller doors above optimizes air flow and moderates the home’s internal temperature. 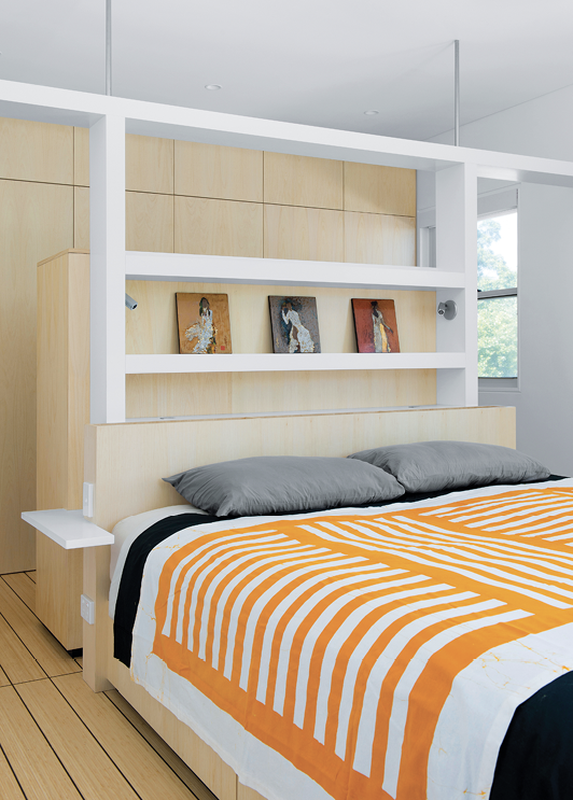