Staff and students share morning tea together in the University of Queensland’s School of Architecture, recently renovated by m3architecture.

My daughter recently moved into her first share house, which got me thinking about the experiences I had over a decade of living in rented houses and flats with friends. I moved out in my first year of studying architecture, fleeing Perth’s outer suburbs and my evangelical parents. It was 1984, an Orwellian year, and the city had a dark side. In 1986 David and Catherine Birnie murdered four young women, one of them a fellow student at the University of Western Australia (UWA). Two of the girls were abducted from the highway that ran past my first flat. Next came Dennis Lyddieth, aka the Nedlands rapist, who from 1987 to 1991 broke into homes in the suburbs around UWA and attacked twelve women. I left the city in 1996, the year of the Claremont serial killer. Living in houses with no locks or security, and bicycling home from the studio late at night, I should have been concerned. Instead, I worried about money and nuclear holocaust – sadly, in that order. In those days, being a full-time student meant exactly that: classes were timetabled five days a week. Working as much as I could, I earned $85 a week, over half of which went to paying rent. The rest funded an unrelieved diet of porridge, potatoes, lentils and invalid port. Fears about nuclear disaster were very much of the period. The catastrophic Chernobyl disaster of 1986 coincided with Mikhail Gorbachev and Ronald Reagan’s failed attempt to reach a unilateral arms control agreement between the USSR and the USA. In 1989, the film Black Rain was released. Based on the aftermath of the atomic bombing of Hiroshima, its terrifying scenes of horribly burned survivors of the explosion became a vivid focus of my anxiety.

In spite of all of this, my generation of students seemed less troubled by mental illness than architecture students today. I say “seemed” because the mental health of tertiary students was not yet a visible part of the cultural landscape. Young people were bombarded with messages about sexual health, including the spectre of the grim reaper in a mass media campaign that improbably implored us to have sex with only one partner. Mental illness, on the other hand, was eroticized and romanticized by Beatrice Dalle’s portrayal of a woman going insane in the 1986 film Betty Blue. Today, there are numerous public health campaigns targeted at mental health as well as formalized services for student counselling. Students have access to strategies and support to help them manage study while suffering mental illness or disability. Nevertheless, we are in the midst of an epidemic of mental illness among students and architecture students are among the worst hit, many citing the competitive nature of the course. A student survey by British magazine The Architects’ Journal found that 26 percent of respondents were being or had been treated for mental health issues related to their course. The results have been widely commented on and discussed in social media. Money worries are a contributing factor in a nation where architecture students incur debts of between £30,000 and £50,000.

Young people are grappling with ecological disaster and its attendant panic, fractured casual work, the prospect of unemployment and of never owning a home. It is clear, though, that the rich set of experiences, spaces and conditions that constituted what we called “student life” have been eroded.

For Australian students, fee debt and living expenses are also a concern but academics like myself are also seeing students from privileged backgrounds struggling with anxiety, depression and stress. It’s obviously a complex situation and I’m not an expert in mental health. Young people are grappling with ecological disaster and its attendant panic, fractured casual work, the prospect of unemployment and of never owning a home. It is clear, though, that the rich set of experiences, spaces and conditions that constituted what we called “student life” have been eroded. My friends and I domesticated and, in our minds at least, defused the threat of nuclear war by talking endlessly about it and, occasionally, attending marches. There was camaraderie. Now, much of the stock of semi-derelict housing in which we lived has been gentrified by the very generation that was once its tenants, and young people delay moving out and into independent adulthood.

The other place that architecture students used to hang out in was, of course, the studio. The studio made it possible to garner opinions about your developing design ideas. By the time we came to present our projects, they had been thoroughly “workshopped” by our friends. In the jargon of pedagogical theorists it’s called “peer learning.” Peer learning is a crucial part of an architectural education as well as a factor in alleviating stress and anxiety. It takes the loneliness out of the late nights. Some universities have lost those dedicated student-centred spaces, places where you could leave your work and return to it night after night. Others have held onto the physical space but are seeing fewer students inhabiting them out of hours.

If we are going to support bright people to graduate as architects with their health intact, then the profession needs to work with universities.

Architects often admonish me and other academics for this loss of architectural culture, recalling their own warm memories of late-night antics, impromptu singing and relationships forged and broken. I feel responsible, but I also recognize that architecture schools and curricula are just one part of a complex ecology of part-time work, course fees, student housing, transportation and living costs that isolates our students from having face-to-face contact with each other. If we are going to support bright people to graduate as architects with their health intact, then the profession needs to work with universities.

I will end with one example of how this is not happening. This semester, the timetable for students enrolled full-time in the Master of Architecture at the University of Queensland required their attendance over two full days and one morning. The previous semester it had been confined to two days. I received a personal email from a local practitioner asking me to change the timetable as several students he employed part-time would no longer be able to work three full days in his office. I was, frankly, shocked and appalled. While it was incredible that he thought I had some control over the university timetable (a complex operation employing a year-round team of dedicated individuals), it was also incredible that both the architect and the students thought it possible to study full-time while working three days a week in a practice. Condoning such an arrangement sets up the expectation that one works every evening and all weekend. It establishes the workaholic culture that is pervasive in the profession, one which is not healthy for any of us. 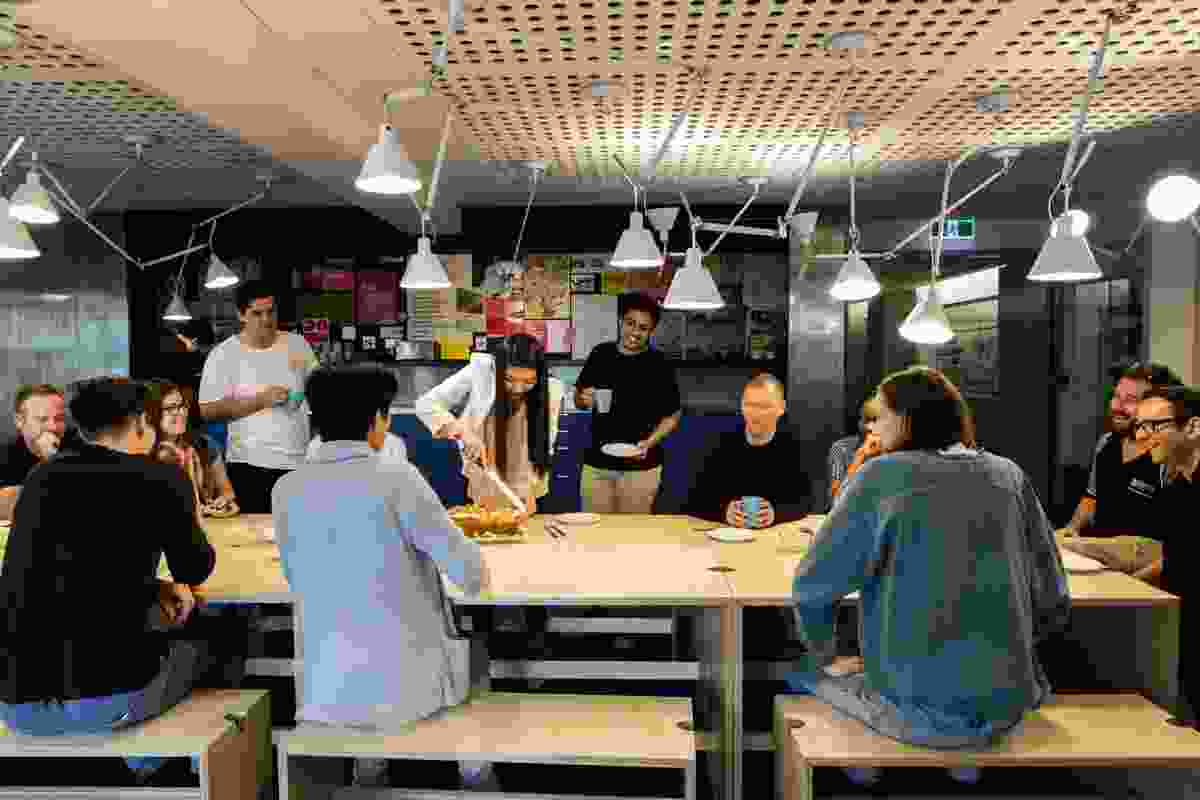 Staff and students share morning tea together in the University of Queensland’s School of Architecture, recently renovated by m3architecture.