A church in north-west Melbourne will undergo a major transformation and open up to the community, after council gave the project the green light.

St Mary’s Coptic Orthodox Church in Kensington was constructed between 1918 and 1920 in red brick, with a pitched gable tile roof. Studio Bright (formerly Make Architecture) has led the design for its planned transformation, along with landscape architect Openwork and SJB Planning.

Studio Bright’s design considers the civic significance and residential neighbours, and the design seeks to organize the site to maximize the community aspects of the building.

Director Melissa Bright presented the project at The Architecture Symposium, Sydney in 2018, and explained, “We wondered what else this project could do, we wondered if there was a role beyond just being a religious building – we thought it had a role to play in the neighbourhood.

“One of the things that we were really excited about when we came to visit this church, and came to the services on Saturdays, was the way the Egyptian community spilled out into the outdoor spaces to sell food.”

The problem, though, was that the design of the existing church building was not necessarily welcoming, it was not clear whether passers-by who were not part of the congregation could take part.

“We thought there was an opportunity for cultural exchange, for something more. We wondered if we could create a courtyard gathering space, where the building could throw open its doors to the street, but also the new building would act as a buffer to protect the neighbours from noisy gatherings.”

The final design envisions a building that is a singular form, which modulates in scale between the monumentality of the existing church on site and the single-storey dwellings surrounding it.

Studio Bright explains that “the form gently wraps around three sides of a courtyard facing the main street frontage, creating a protected open space both for bringing together the congregation and students for gatherings and casual socializing, and also contributing a new public space to the streetscape, which invites the public in.”

In terms of the design language, the building embeds many of the motifs of Coptic churches from around the world, including the use of mainly monolithic and singular materials, with punched openings, typically arches, and the liberal use of gold.

“We liked the idea that the rich interiors might reach out to our exterior, with the gold steel arches and the breezeblock pavers adding a little bit of decoration,” said Bright.

“The project has been for us about finding the right balance: Egyptian enough but also Australian enough; religious enough but also public enough; balancing the residential scale and the civic scale; a building that is for the Coptic community, but also for the broader Kensington community.”

The original scheme for the church, which called for the retention of the main church, demolition of surrounding buildings and construction of a new two-storey building, was approved in 2018. The proposal was later amended, however, to accommodate a child care centre across the western wing of the new development. City of Melbourne councillors voted to grant the amended permit on 19 November.

The child care centre will accommodate a maximum of 46 places, and will replace the Sunday School meeting rooms and offices detailed in the original approved plans. 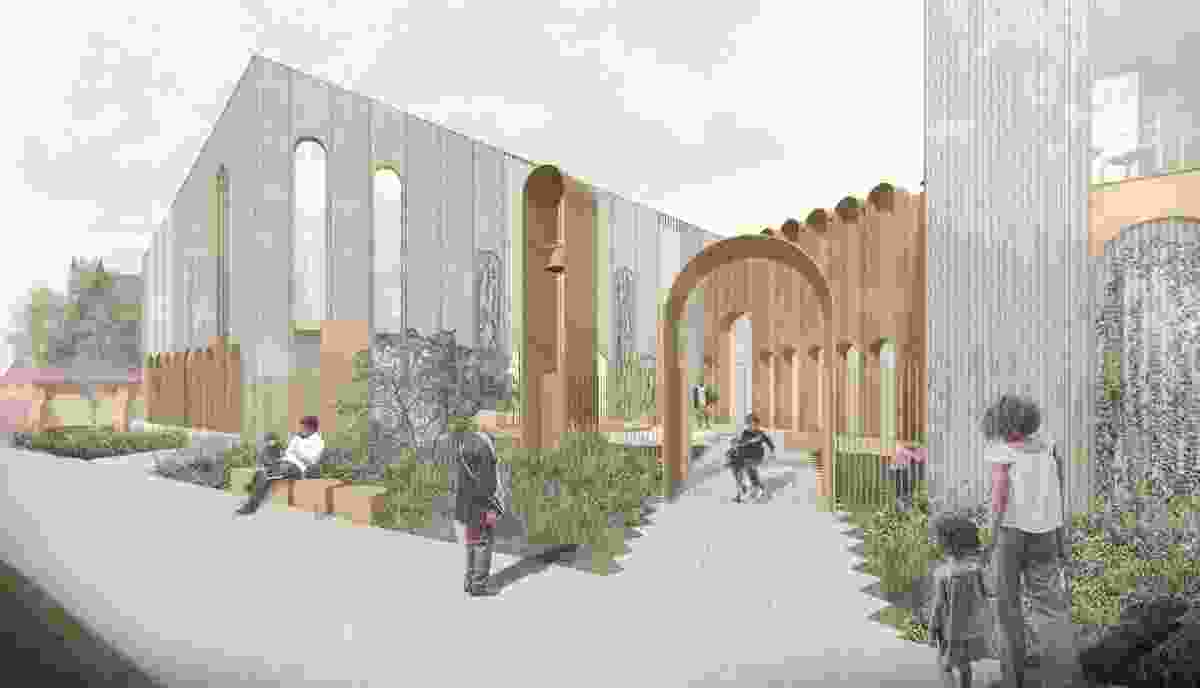