An Indian entrance tower used for ceremonies, called a tazia, provides a welcoming gesture to the MPavilion designed by Studio Mumbai.

The pavilion has been handcrafted using Indian traditional construction techniques with materials sourced from both India and Australia.

“MPavilion is a space for the people of Melbourne to gather, talk, think and reflect. My objective has not been just to create a new building, but [also] to capture the spirit of the place by choosing the right materials, respecting the surrounding nature and working collaboratively with local craftspeople to share design and construction ideas,” said Bijoy Jain, founder of Studio Mumbai.

Seven kilometres of bamboo were imported from India to form the colonnade structure of the pavilion, which sits on a 50-tonne bed of bluestone flooring sourced from a quarry in Port Fairy, in south-west Victoria.

The structure is fixed together with 5,000 wooden pins and 26 kilometres of rope. The roof is made from slatted panels constructed from sticks of the Karvi plant (a type of reed) and woven together by Indian craftspeople.

At the centre of the roof is an oculus, which opens to the sky. Below that, a symbolic bore, which is covered in gold leaf, reaches deep into the ground to the water table.

“The bore is also symbolic of so many other gestures that are related to the Australian landscape,” Jain told ArchitectureAU. “But this is a bore that is actually connecting to time, to our ancestors. That, in a sense, is the genius loci of the site.”

Beside the pavilion sits a elaborate tazia (an entrance tower used in Indian ceremonies) that presents a welcoming gesture.

“Bijoy’s handcrafted MPavilion is a calming and thoughtful space, which will inspire the people of Melbourne,” said Naomi Milgrom, founder of MPavilion.

The pavilion was constructed by a team of craftspeople in India as well as Australian builders who travelled to India to participate in Studio Mumbai’s collaborative design and construction process.

The pavilion will also be a multi-sensory experience. A lighting display by Ben Cobham of Bluebottle that plays in sync with a soundscape by artists Geoff Nees and J. David Franzke will be activated each night at twilight.

Studio Mumbai’s pavilion is the third in a series of four annual pavilions commissioned by the Naomi Milgrom Foundation and inspired by London’s Serpentine Pavilion concept. The first, designed by Australian practice Sean Godsell Architects, was gifted to Melbourne and is now permanently located at the Hellenic Museum. The second pavilion, designed by London-based Amanda Levete Architects, has been permanently relocated to a park in Docklands.

MPavilion will be host to a four-month-long program of free public events until 18 February 2017. See ArchitectureAU’s editors’ picks of the events here. 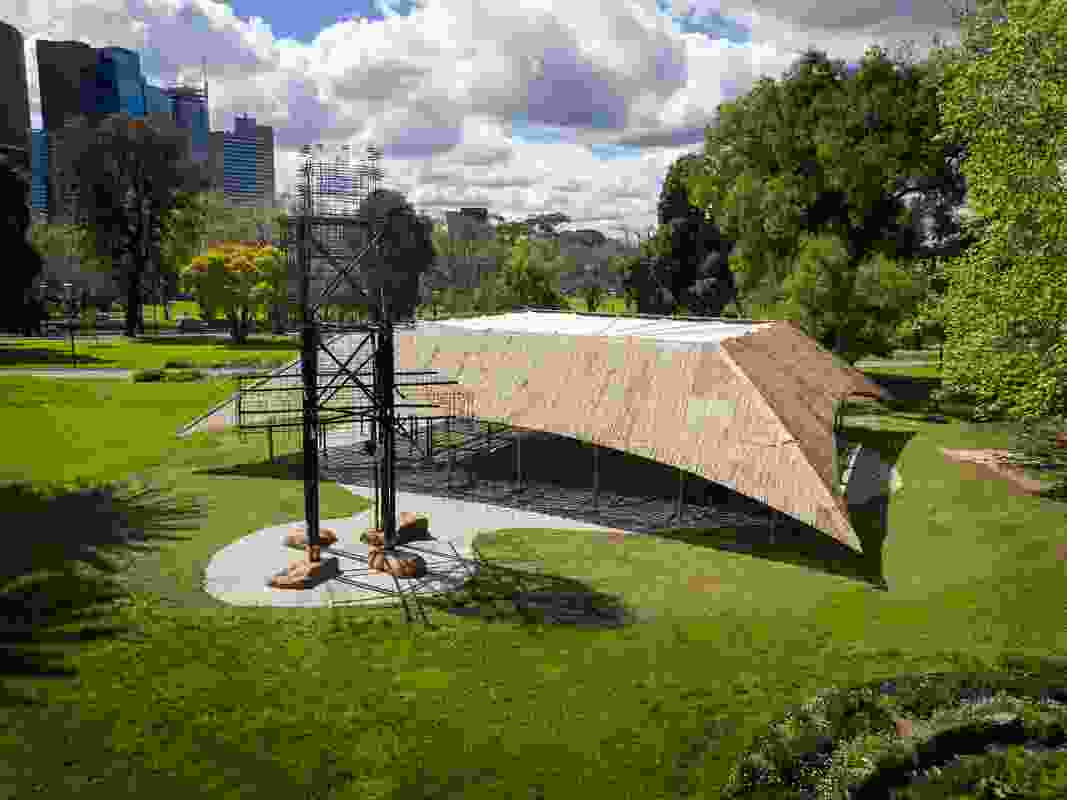 An Indian entrance tower used for ceremonies, called a tazia, provides a welcoming gesture to the MPavilion designed by Studio Mumbai. 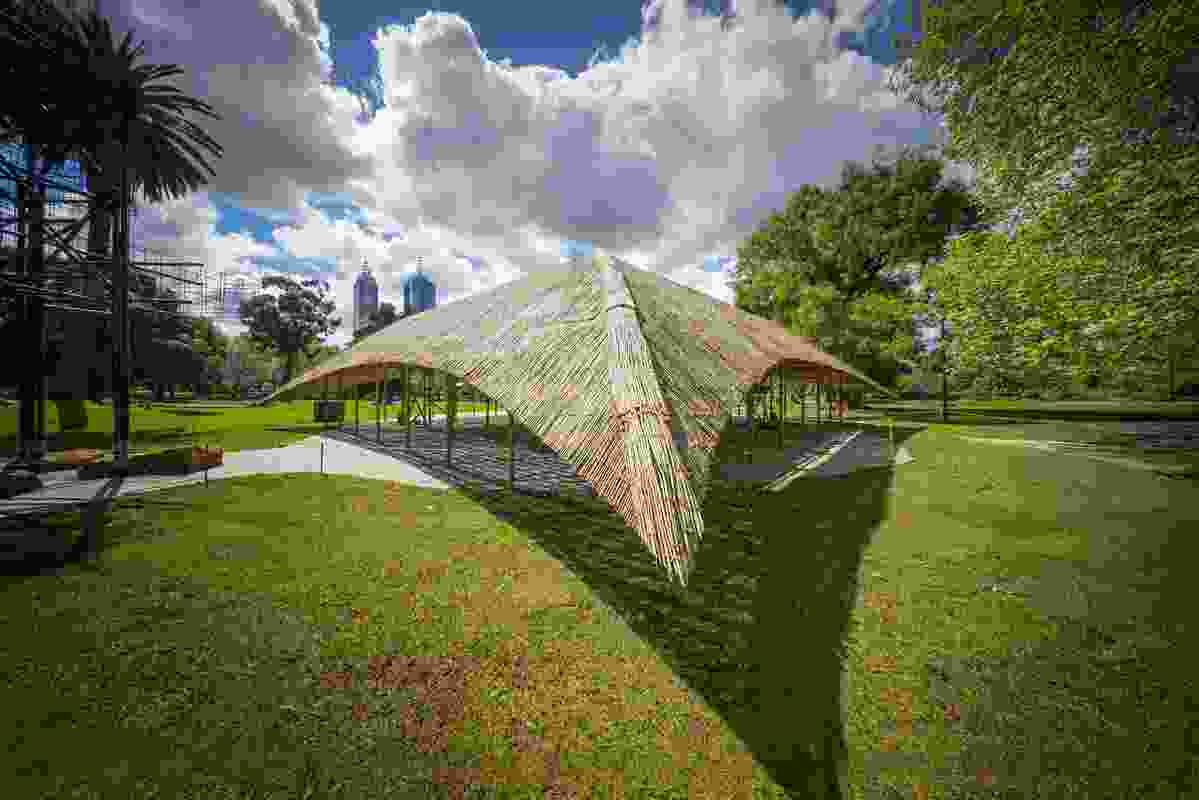 The roof of the 2016 MPavilion by Studio Mumbai is clad in slatted panels made from sticks of the Karvi plant. 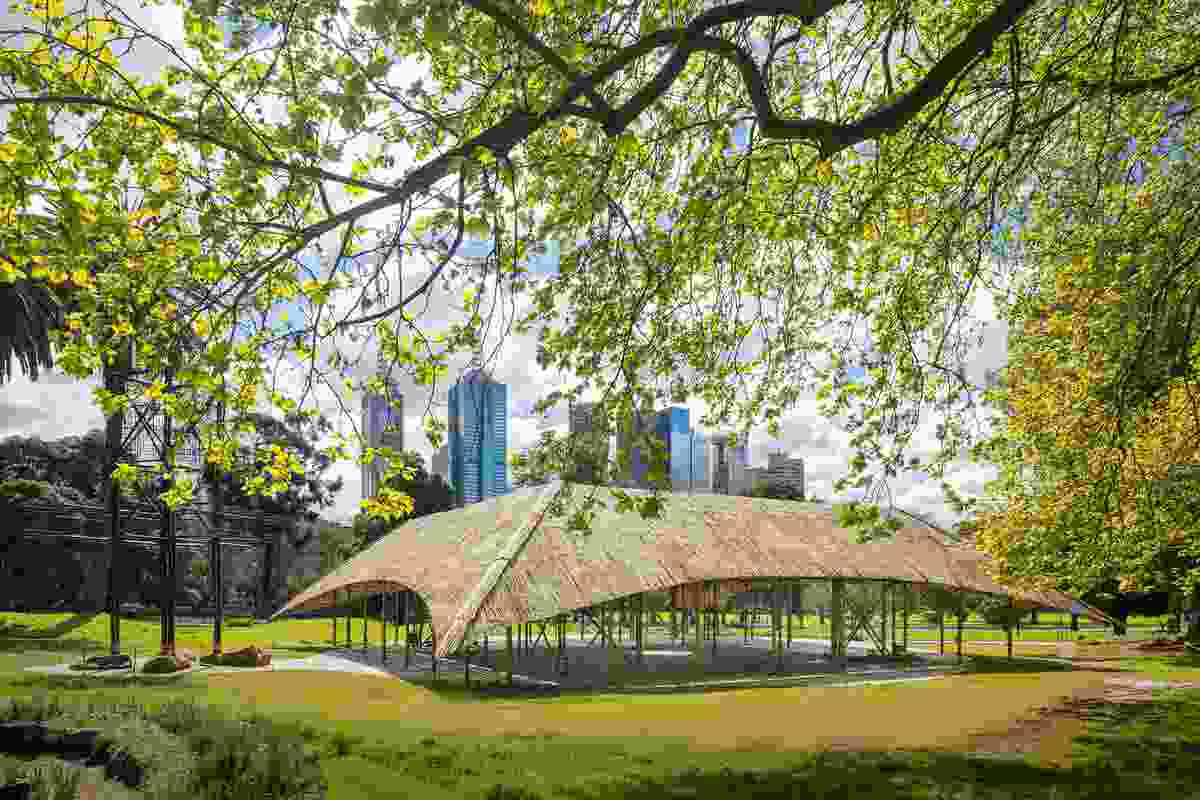 The 2016 MPavilion by Studio Mumbai in the landscape of Melbourne’s Queen Victoria Gardens. 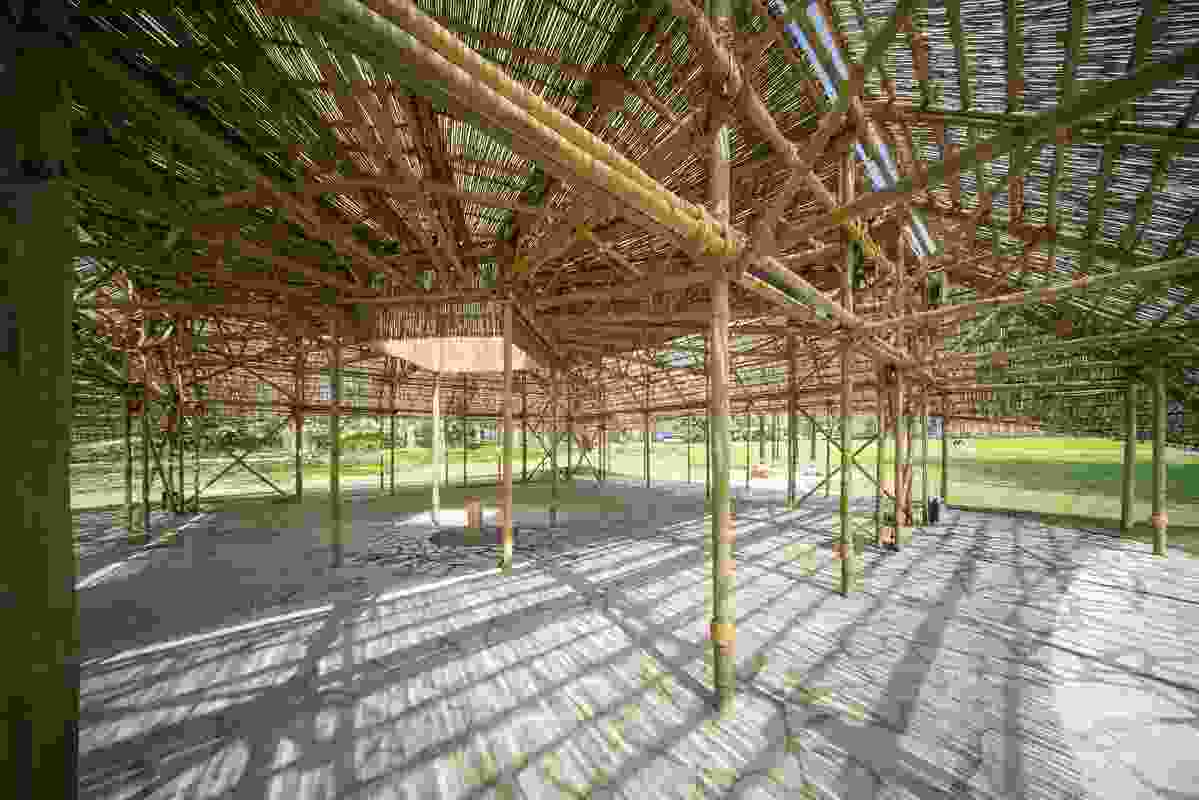 The 2016 MPavilion by Studio Mumbai features a symbolic, gold-leaf-covered bore. 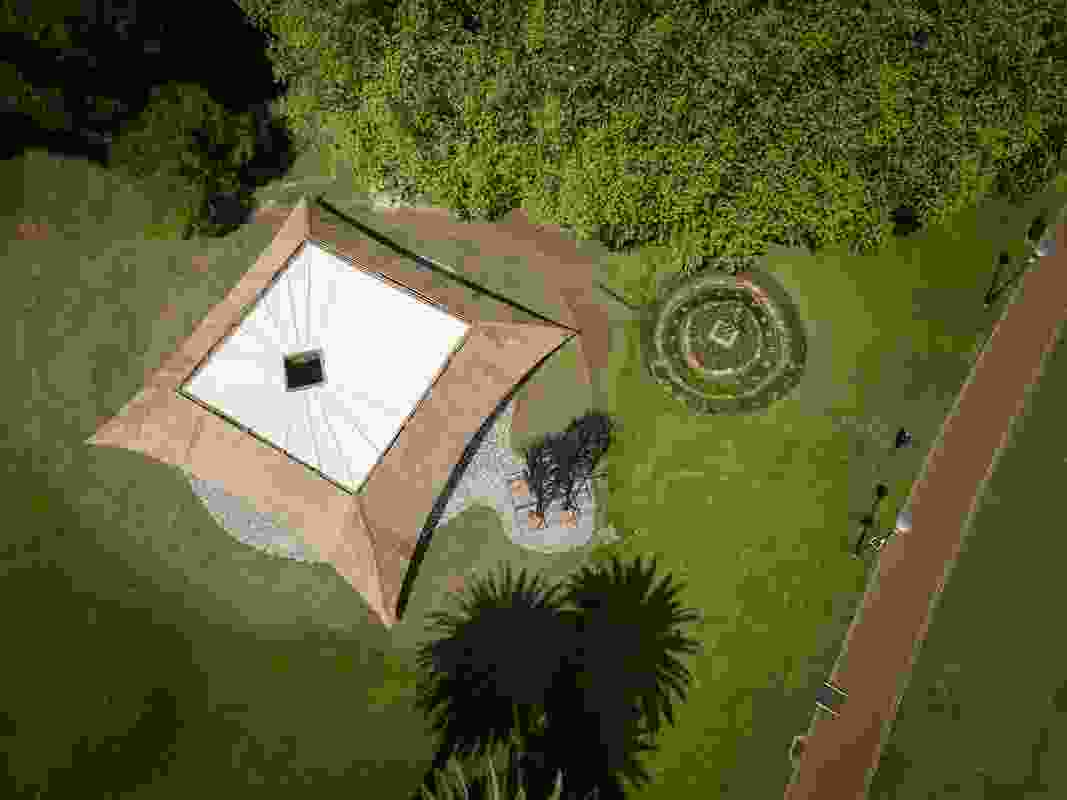 The 2016 MPavilion designed by Studio Mumbai features an oculus to the sky. 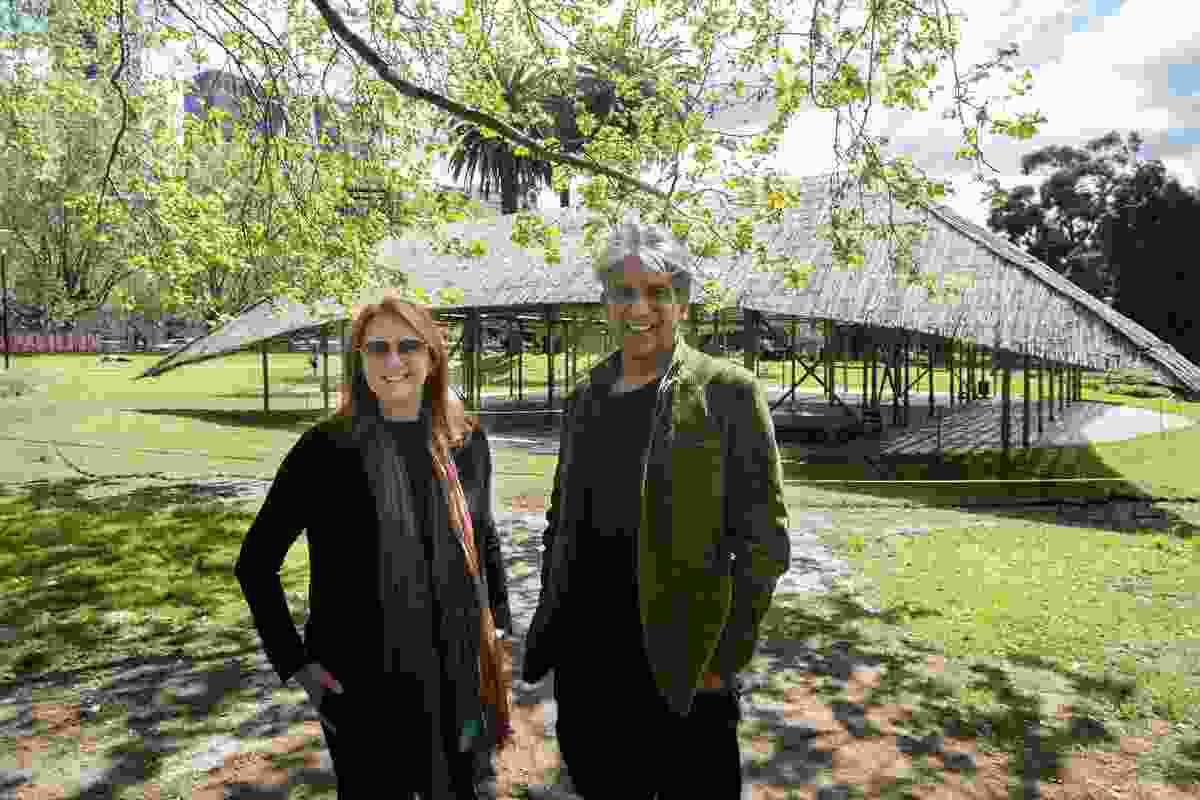