Projecting over a sloping site in a leafy Melbourne suburb, this heroically cantilevered family home navigates the terrain while saluting the mid-century architecture that informed its design.

On approach, the home’s bold cantilever and porthole window make for a striking composition in the landscape.

The steep riverine terrain of Studley Park is unique in suburban Melbourne. Largely considered unsuitable for building until after World War II, it then became a testing ground for adventurous twentieth-century architects such as Robin Boyd, Peter McIntyre, Anatol Kagan and McGlashan Everist, who used inventive form and technological advances to tailor homes to the topography.

Faced with a steep vacant site and a highly engaged client, March Studio looked to this modernist tradition for cues to how best accommodate a large family home. Key drivers of the brief were the capture of daylight (including in the morning – a challenge on a site falling to the west) and a direct connection between the living areas and the land.

A bold cantilever is the most visible move and a salute to the dramatic forms of the house’s modernist precedents, which achieved feats of daring that previous generations could often only suggest. Giant geometric trusses suspend the first floor and remain partially exposed inside the building. The structure of the entire house is steel, painted black wherever it is visible, like the elegant precedent of the nearby Guss House by McGlashan Everist, built circa 1966.

March Studio has long demonstrated a strong interest in prototyping and testing, with many of its projects becoming part of an ongoing experiment in practice. Studley Park House was designed at a similar time to the practice’s award-winning Compound House and parallel interests can be seen. These include key elements such as the plan arrangement and the overlay of a veil that envelops the entire first floor. Early models of the house show a black perforated steel-plate screen but an iterative process of testing and refining eventuated in a lighter structure comprised of a series of rolled pipes threaded with blackened timber dowels. Creating form and privacy, and unifying the various functional requirements of the facade, the veil also provides an armature for future planting. Behind it, the simple black forms of the house appear to float closer to the street than planning regulations would allow.

The standard necessities of vehicle and pedestrian access are consolidated beneath the cantilever to create a dramatic entry sequence. March Studio’s Rodney Eggleston speaks of realizing an ambition to create a building entered from below, where you ascend from solid ground via a delicate staircase to become enveloped by the belly of the building floating above. Inspired by the imaginative unbuilt works of the Soviet constructivist architect Ivan Leonidov, it is a design approach perhaps most famously realized in Lina Bo Bardi’s 1951 Glass House in Sao Paulo, Brazil. This means of celebrating the return to the security of home could also evoke the interstellar pop-culture references of E.T. or Star Wars – climbing the gangway to the safety of the hovering spaceship as bold streaks of light illuminate the car park/launchpad below.

The point of arrival is a surprising courtyard – a compact outdoor vestibule of blackened timber walls that provides a moment of repose and a green outlook for the home office. Inside, a central living space is pinwheeled by bedroom wings to the north and west. The longer wing stretches along a wide gallery where the ceiling rakes up to a towering wall of luminous multi-wall polycarbonate, a translucent material acting as facade, glazing and insulation combined. Capturing morning light, the wall is alive with the shadow play of the surrounding tree canopy.

The stair funnels down between off-form concrete walls to the main living area below. Surrounded by light on three sides despite being partially buried in the terrain, this vast space fills the ground floor. Cranked windows look up to a sliver of rainforest garden carved into the eastern boundary while walls of sliding doors open level with the grassed western yard. Originally envisioned as a half soccer pitch, this yard is now overseen by a mammoth custom barbeque. At the rear of the site, a small studio and an extensive vegetable garden sit adjacent to a raised pool; the elevation of the water reduces the extent of regulatory fencing and allows views and reflected light into the living space.

A project of this scale and complexity doesn’t happen quickly or easily and many hands have been involved in the finished product. Extensive interior timber linings were deleted during the process but the big moves remain strong. With its considered response to the site, March Studio has created both an imaginative new work and an homage to the optimistic and adventurous architectural legacy of the surrounds.

Aboriginal Nation
Wurundjeri and Woiwurrung people of the Kulin nation 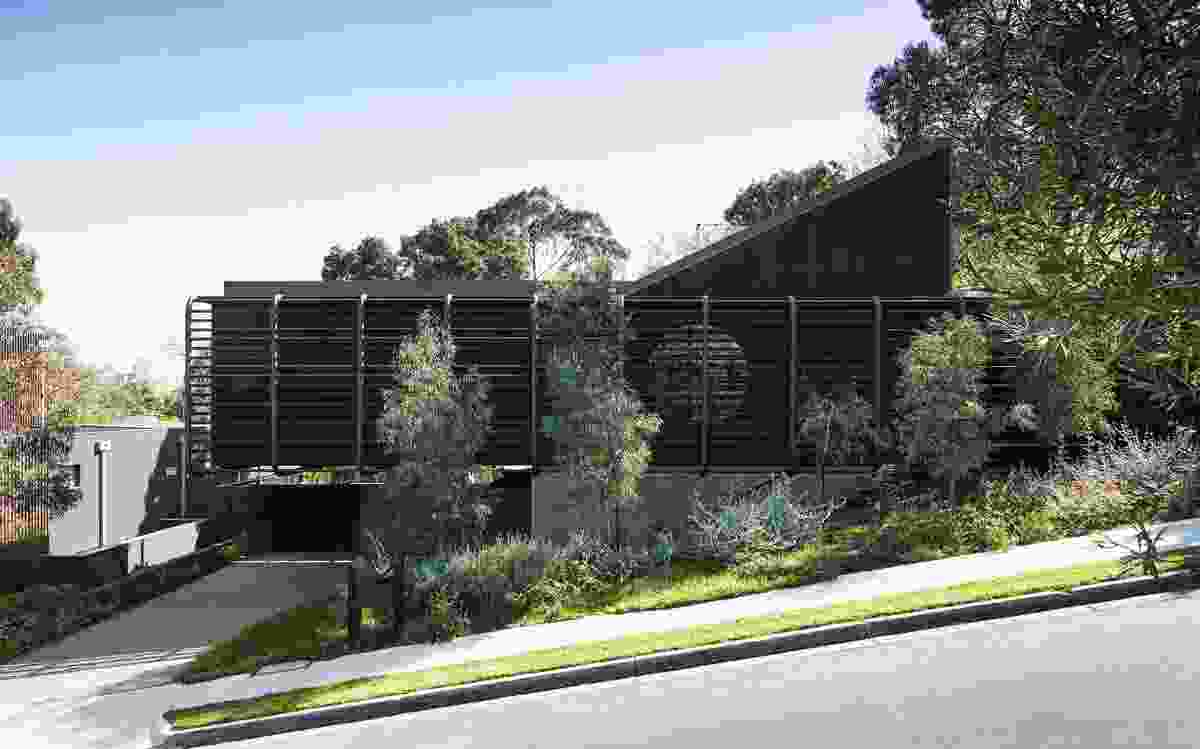 On approach, the home’s bold cantilever and porthole window make for a striking composition in the landscape. 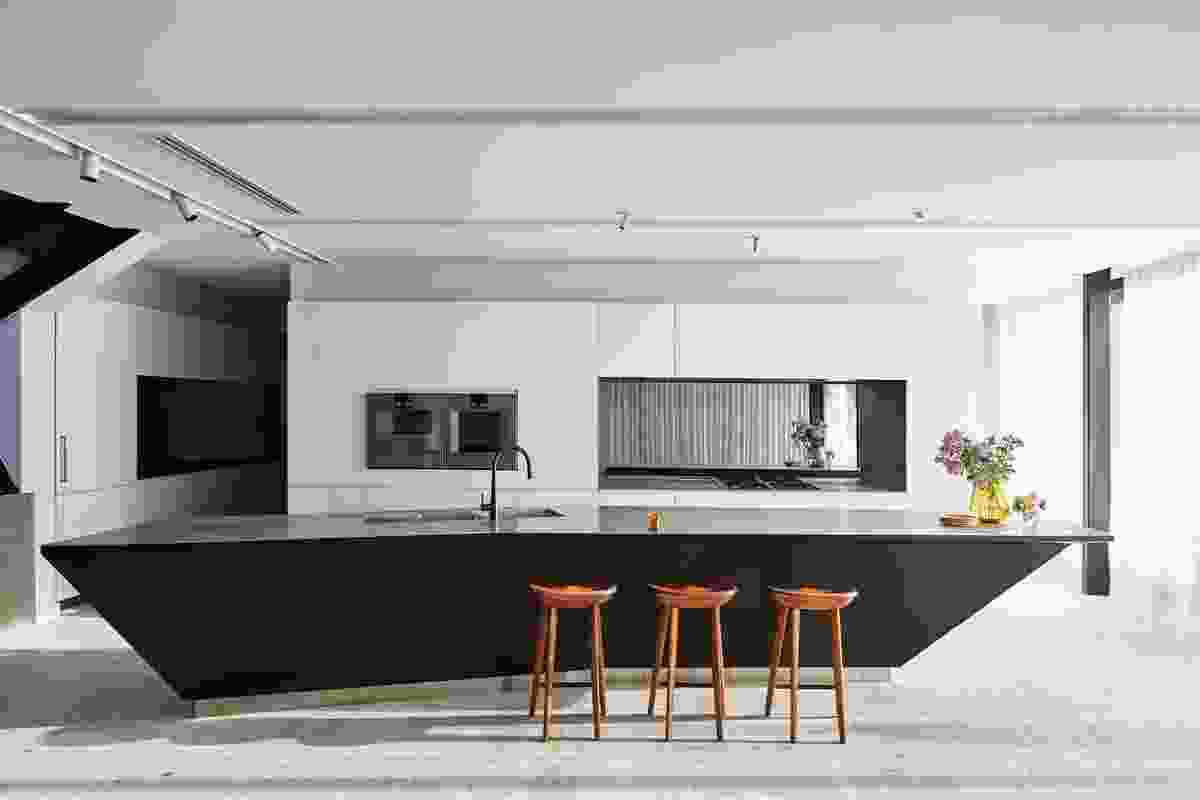 The lower living level is surrounded by light on three sides despite being partially embedded in the terrain. 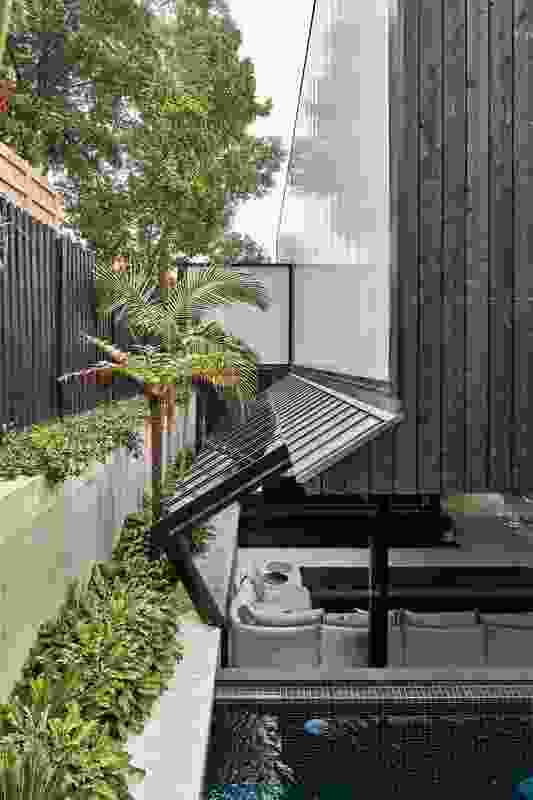 Running the length of the upstairs bedroom wing, a wall of polycarbonate serves as facade, glazing and insulation in one. 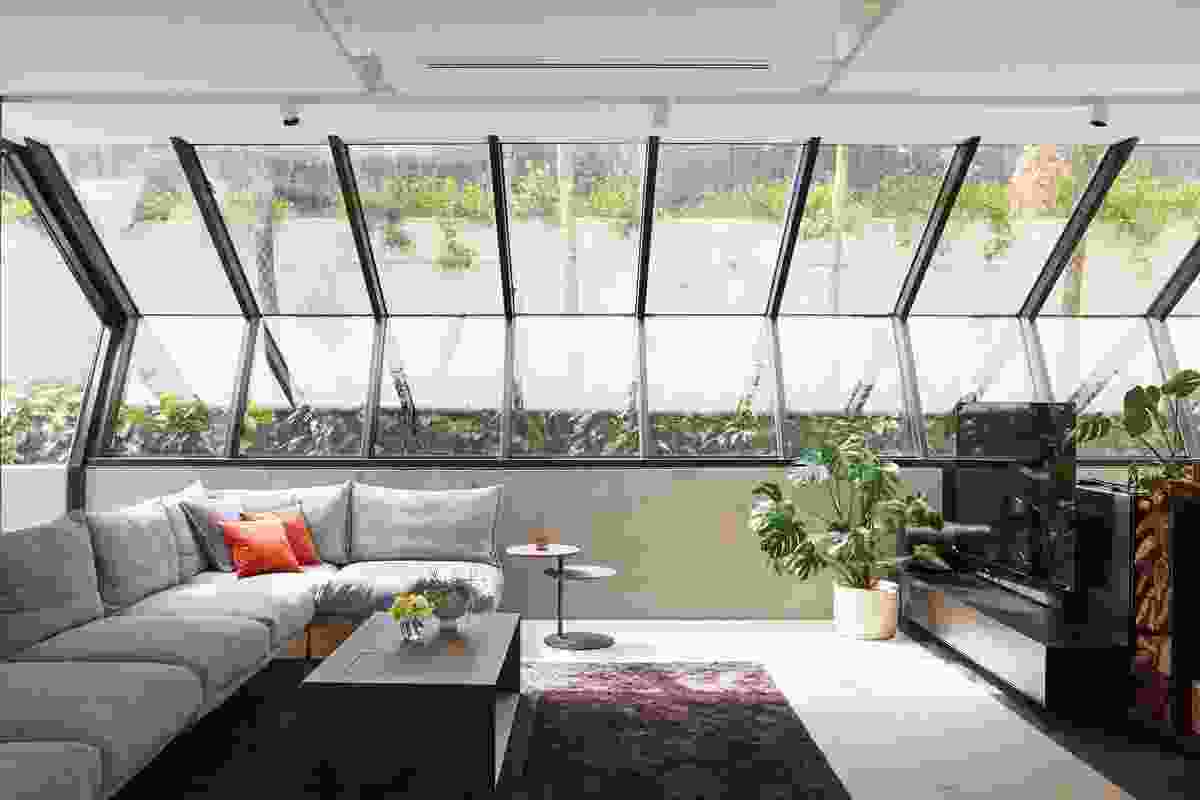 Angled windows in the living room look up to a sliver of rainforest garden and catch morning sun from the east. 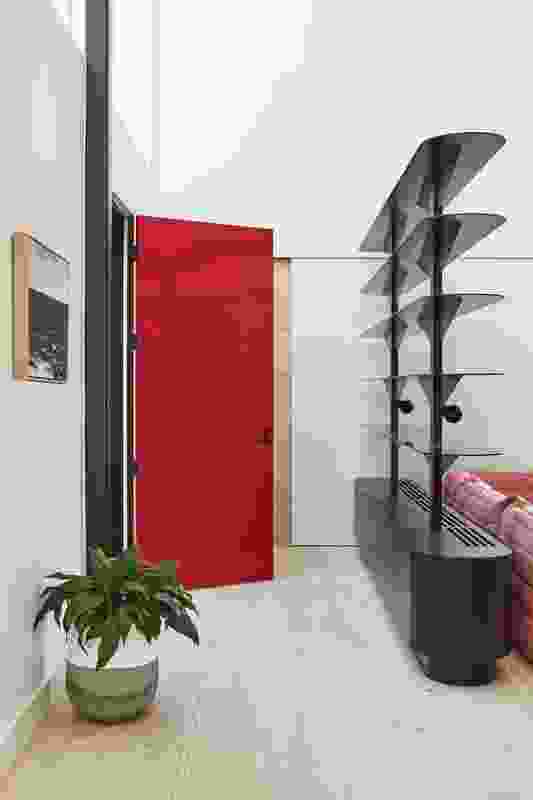 Opening off a walled garden, the entry sequence is punctuated by a bright red door. 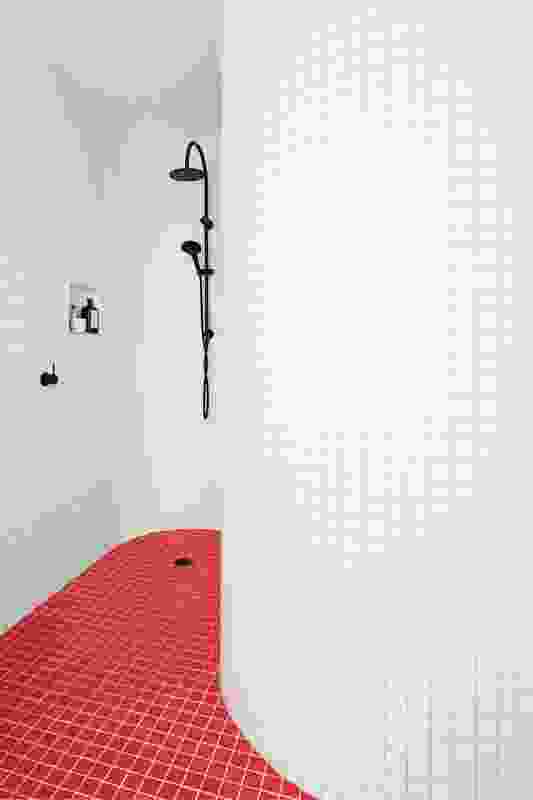 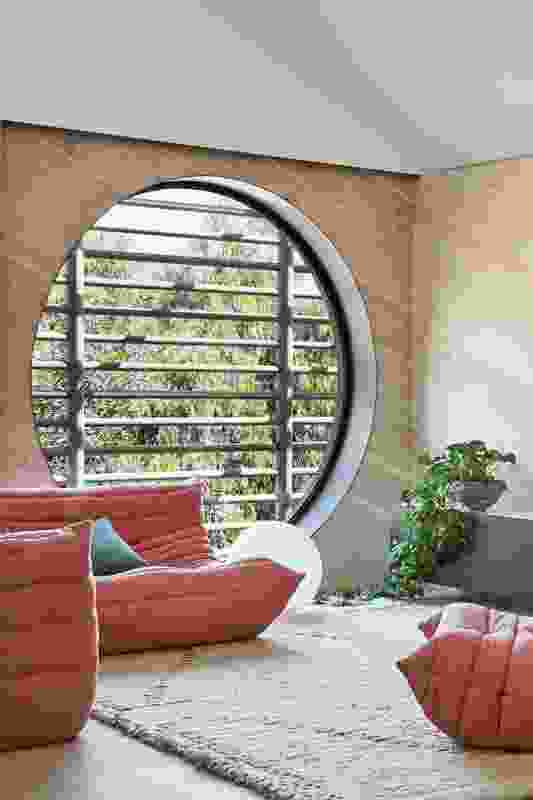 Geometric trusses that suspend the first floor can be glimpsed from the interior. 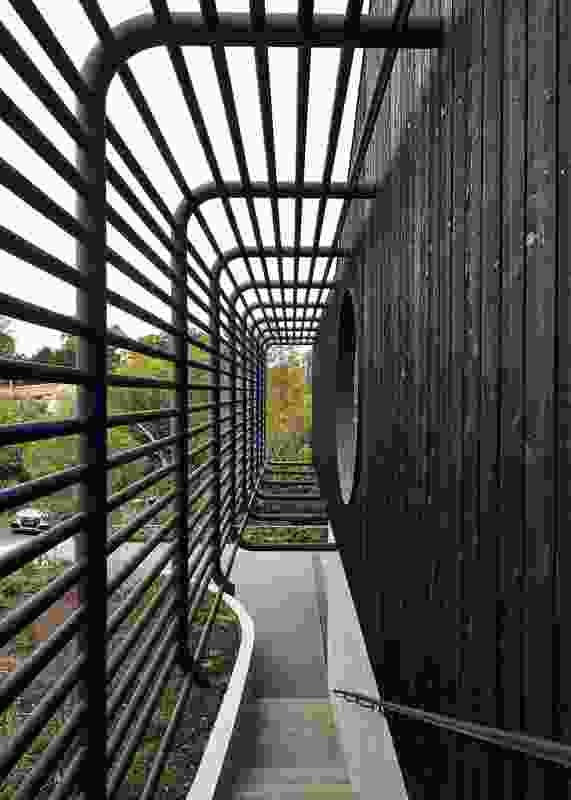 A veil of rolled steel pipes is threaded with blackened timber dowel.