Summer of architecture and art: Christo, Jeanne-Claude and the Serpentine Pavilion.

Colin Martin explores three highlights of London’s summer of architecture and art: an exhibition and an installation by artist-couple Christo and Jeanne-Claude and the latest Serpentine Pavilion by Mexican architect Frida Escobedo.

Frida Escobedo’s pavilion is aligned to the Serpentine Gallery beyond.

Established in 2000, the annual Serpentine Pavilion is now as important a part of London’s summer season as is the Chelsea Flower Show or the Wimbledon Championships. Unlike these short-lived events, it’s open for four months and entry is free. The 2018 pavilion, the 18th to be built, was designed by the youthful Mexican architect Frida Escobedo.

Concurrently, the Serpentine Gallery is showing a survey exhibition of 60 years of work by the veteran artist Christo and his wife, the late Jeanne-Claude. The London Mastaba, their first installation in London, is displayed on a floating platform moored on the Serpentine Lake. Their Wrapped Coast, Sydney (1968–1969) created a stir in Australia, redefining what art might be for my generation.

It was a joy to see Christo feted like a rock star at the press view, besieged by a scrum of journalists, press photographers and television camera crews worthy of the recently married couple at Kensington Palace. It’s shaping up as London’s summer of architecture and art in the Royal Parks, providing a welcome diversion to the gloom surrounding the country’s protracted Brexit negotiations.

Escobedo’s pavilion is an enclosed courtyard formed from celosias, the traditional breeze walls common in Mexican domestic architecture. Its plan comprises two rectangular volumes positioned at an angle from one another. While the outer walls are aligned in parallel to the Serpentine Gallery’s eastern façade, the axis of the internal courtyard pivots to align directly north. In doing so, it references the Greenwich Prime Meridian established at the Royal Observatory in 1851, which defines how time and distance are measured globally.

“The intersecting planes that result from this simple rotation produce a series of irregular shapes and defined boundaries, with each area within the pavilion encouraging play, circulation, contemplation and conversation,” says Escobedo. Formed from open lattices of dark-grey cement roof tiles, the celosias allow glimpses into the surrounding park from within, visually fracturing the landscape and sky into a blur of green and blue, throughout the long hours of summer daylight. At night, the pavilion structure withdraws into itself, creating a sense of containment or cocooning within the darkened park.

In contrast to the rough- and light-absorbing surfaces of the pavilion’s celosias, its interior incorporates dual reflective elements which accentuate the movement of light and shade throughout the day. The curved underside of the trapezoidal steel canopy, covering most of the pavilion, is clad with mirrored panels, which reflect light across the space.

This is complemented by a shallow (5mm deep) reflective pool covering part of the floor, which provides a shifting reflection of the sky, surrounding trees and the Serpentine Gallery’s roof. These smooth surfaces create a dynamic play of light and shadow within the pavilion’s interlinked spaces.

“The expression of time in architecture through inventive use of everyday materials and simple forms has been central to our practice from the beginning [in 2006],” says Escobedo. “Light and shadow, reflection and refraction, turn the pavilion into a timepiece that charts the passage of the day.”

Henri Bergson’s notion of ‘social time’, proposing that our understanding of ourselves and our environments depends primarily on the duration of our interactions, provides the theoretical framework for the social spaces, designed by Escobedo, which can be inhabited and experienced by individuals and groups. The 2018 Serpentine Pavilion is one such space.

Established with the objective of inviting internationally renowned architects who hadn’t previously built a design in the UK, the Serpentine Pavilion programme has, more recently, shifted its emphasis towards commissioning emerging architects. Escobedo’s invitation to design this year’s pavilion came out of the blue in an email, but her practice has experience with pavilions, having previously designed and built examples in Lisbon, Chicago and Stanford. Last year, she designed and installed a reflective pool in the courtyard at the nearby Victoria and Albert Museum, so, it’s not her first outing in London but it is inspiring and thought-provoking.

Artistic collaborators from 1961 until Jeanne-Claude’s death in 2009, Christo and Jeanne-Claude are celebrated for their continuing international series of public projects, many with gestation periods measured in decades, involving complex permit negotiations and logistics planning. Christo and Jeanne-Claude: Barrels and the Mastaba 1958–2018, at the Serpentine Gallery exhibits sculptures, drawings, collages, photographs and models, surveying six decades of their studio practice.

Working initially with paint cans, they quickly progressed to working with disused oil barrels, attracted by their sculptural effect and low cost. The exhibition shows seven groups of Wrapped Cans (various dates, 1958–1960), comprising varying numbers of cans, both unwrapped and wrapped in fabric, and painted or lacquered. Seven groups of Wrapped Oil Barrels, in varying numbers and configurations (various dates, 1958–1959), made concurrently with the smaller tableaux of paint cans, demonstrate how quickly Christo and Jeanne-Claude’s sculptures increased in scale.

Christo’s draughtsmanship, in five small ink drawings on tracing paper (1962), proposing barrel installations within everyday urban areas, is remarkable in presenting improbable scenarios as architecturally plausible. His and Jeanne-Claude’s initial use of rusty, dirty barrels, some with attached remnants of their original labels, celebrated their previous industrial use. Stacking them vertically elevated them to the status of monumental sculpture. Later, they used clean and vibrantly coloured barrels, prefabricated for each new project. The initial grittiness was superseded by the increasing scale of their work.

Stacked Oil Barrels, Cologne Harbour, Germany (1961) was Christo and Jeanne-Claude’s first work in the form of a ‘mastaba’. This shape became the leitmotif in their continuing stream of proposals for projects comprising massive numbers of oil barrels. The term ‘mastaba’ originated 6,000 years ago in Mesopotamia. Its Arabic meaning is ‘bench’, which is discernible in its trapezoidal form: a solid rectangular volume with two diagonal sides and two vertical ones. The form is easily made by stacking cylindrical objects, such as barrels, horizontally.

“The mastaba is an extraordinary form,” says Christo. “It’s a different vision of height from different angles, different lines… When you’re in a lateral position and you look at the diagonal walls, you feel that the whole structure is about to explode.”

The Mastaba (Project for London, Hyde Park, Serpentine Lake) 2018 comprises 7,506 coloured barrels. It is Christo and Jeanne-Claude’s first public sculpture in the UK and the largest yet of their realised barrel works. The exhibition displays 50 of Christo’s drawings and collages for the project. The latter are often based on those of his long-term collaborator Wolfgang Volz.

Viewed beside the lake, the mastaba (H: 20m, D: 10m, L: 40m) is an impressive sight, marooned on its floating platform. The red-and-white sides of its barrels, visible on its two slanted walls, and their red, blue or mauve ends, visible on its two vertical walls, sparkles in the summer morning sunshine.

“Walk around the park and examine the mastaba from multiple viewpoints,” urged Christo. “Any interpretation is legitimate.”

Summer of architecture and art: Christo, Jeanne-Claude and the Serpentine Pavilion. 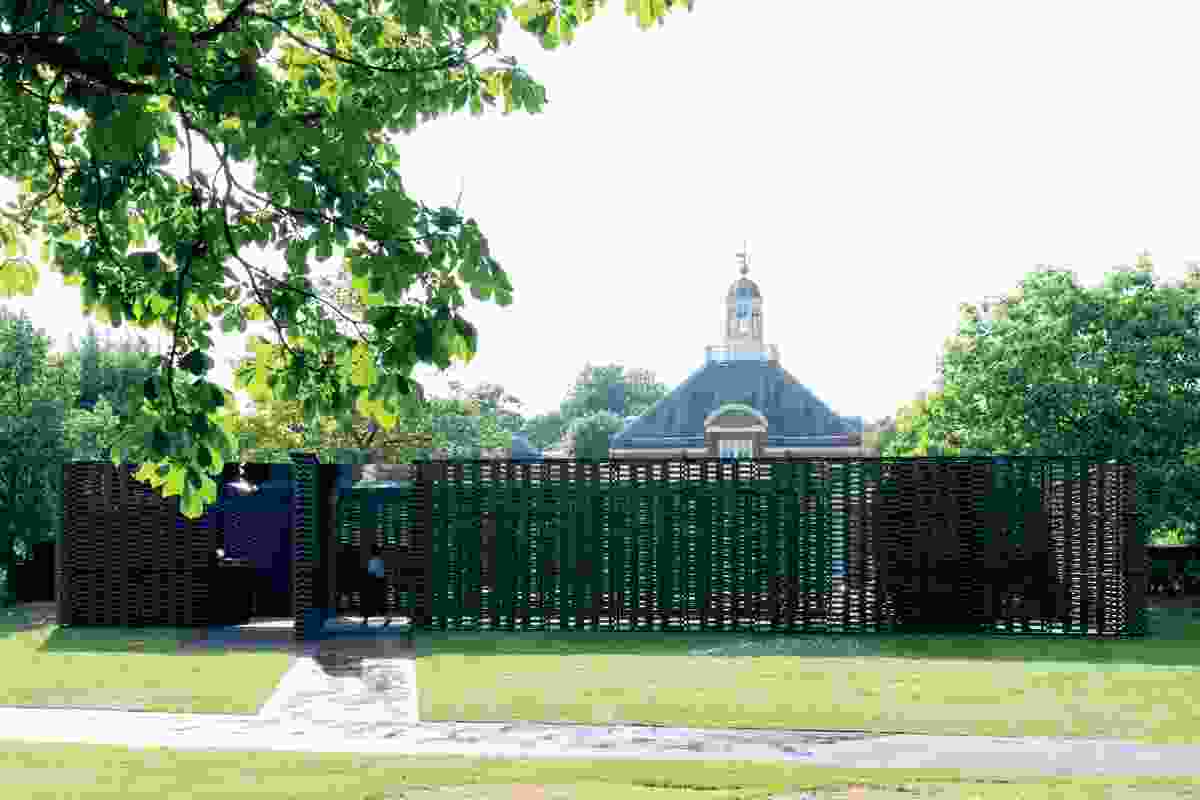 Frida Escobedo’s pavilion is aligned to the Serpentine Gallery beyond. 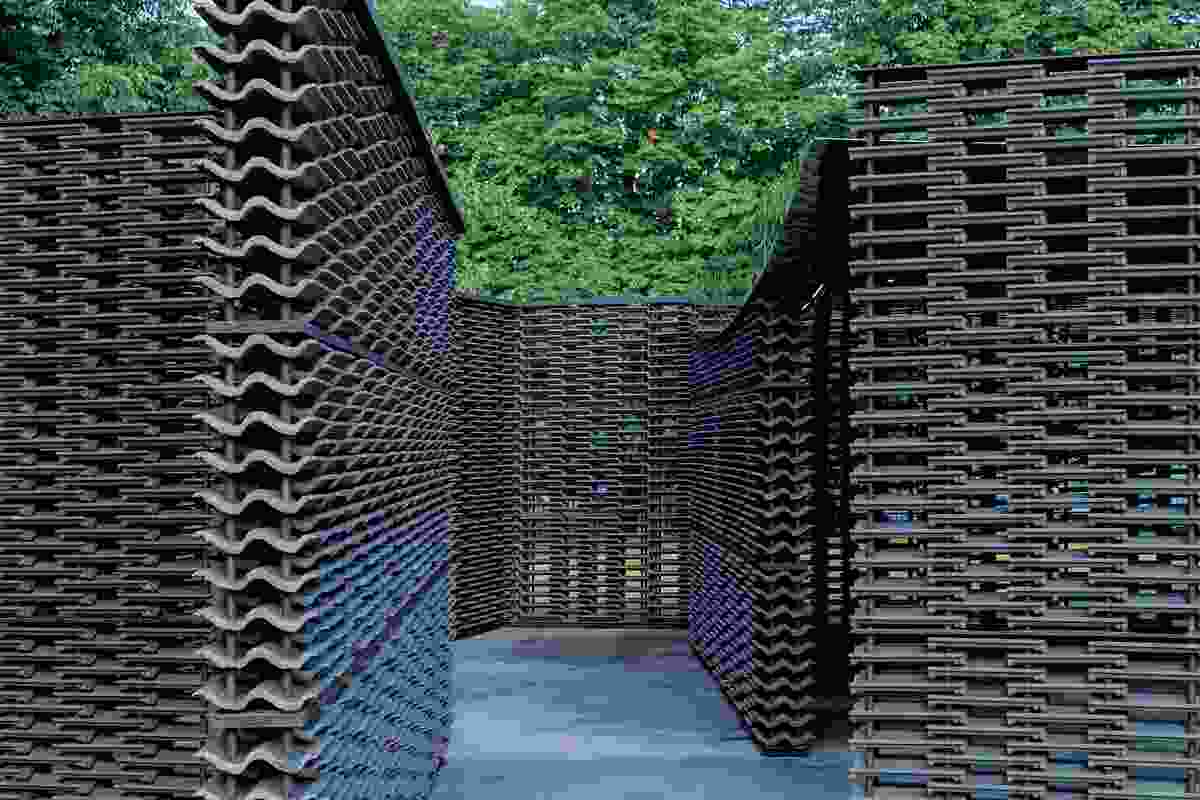 An unroofed area of the pavilion. 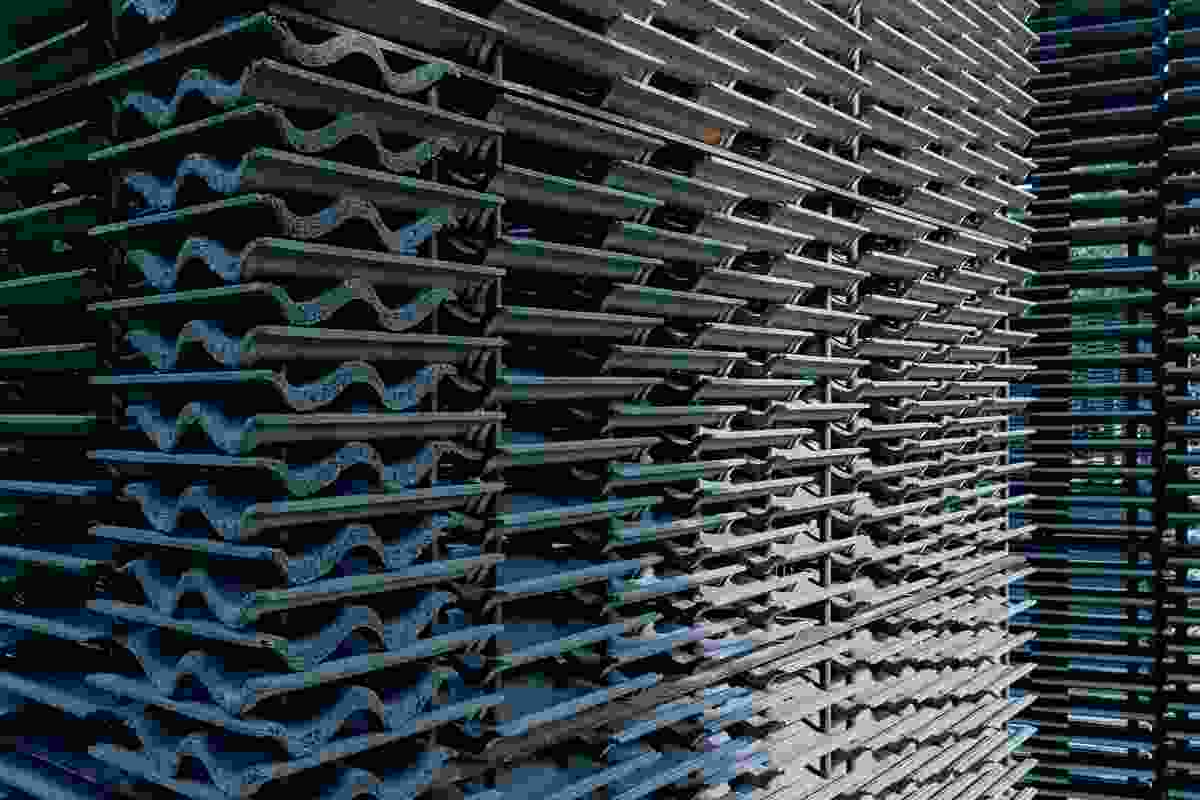 A corner of the pavilion showing juncture of traditional Mexican celosias or perforated screens. 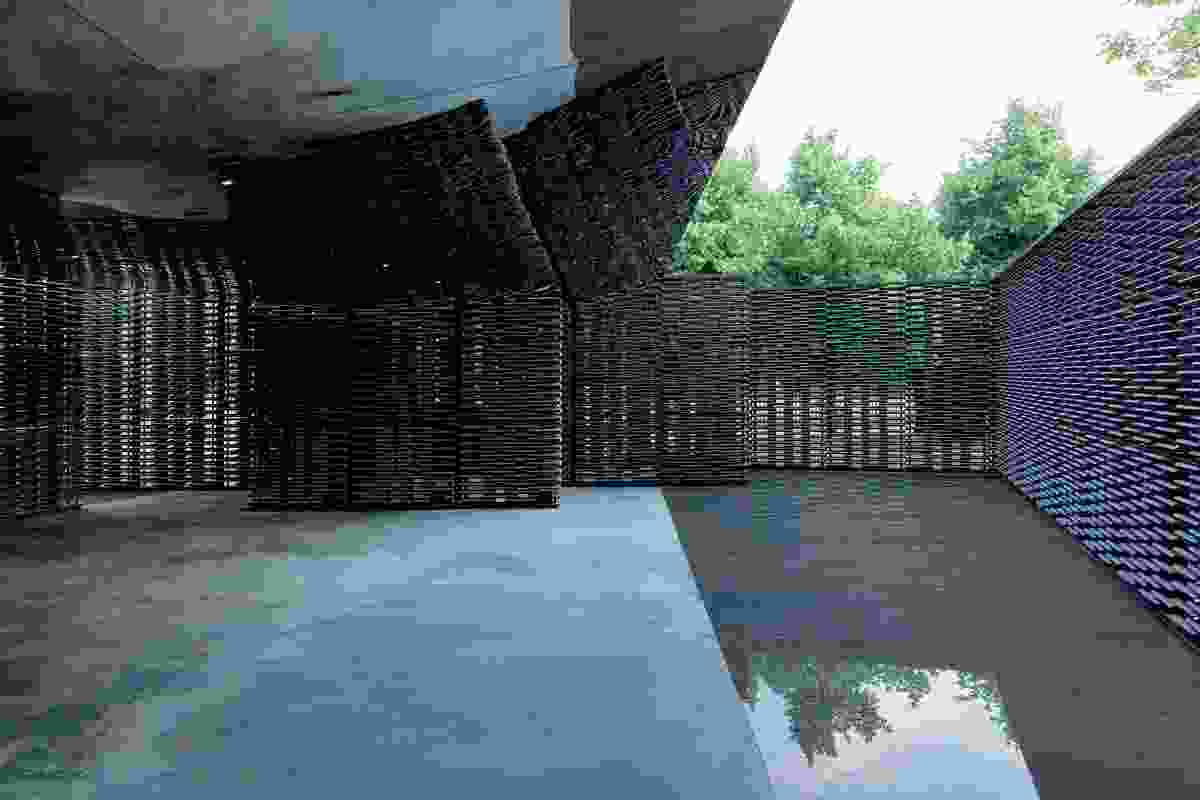 A shallow pool and the mirrored ceiling jointly reflect light. 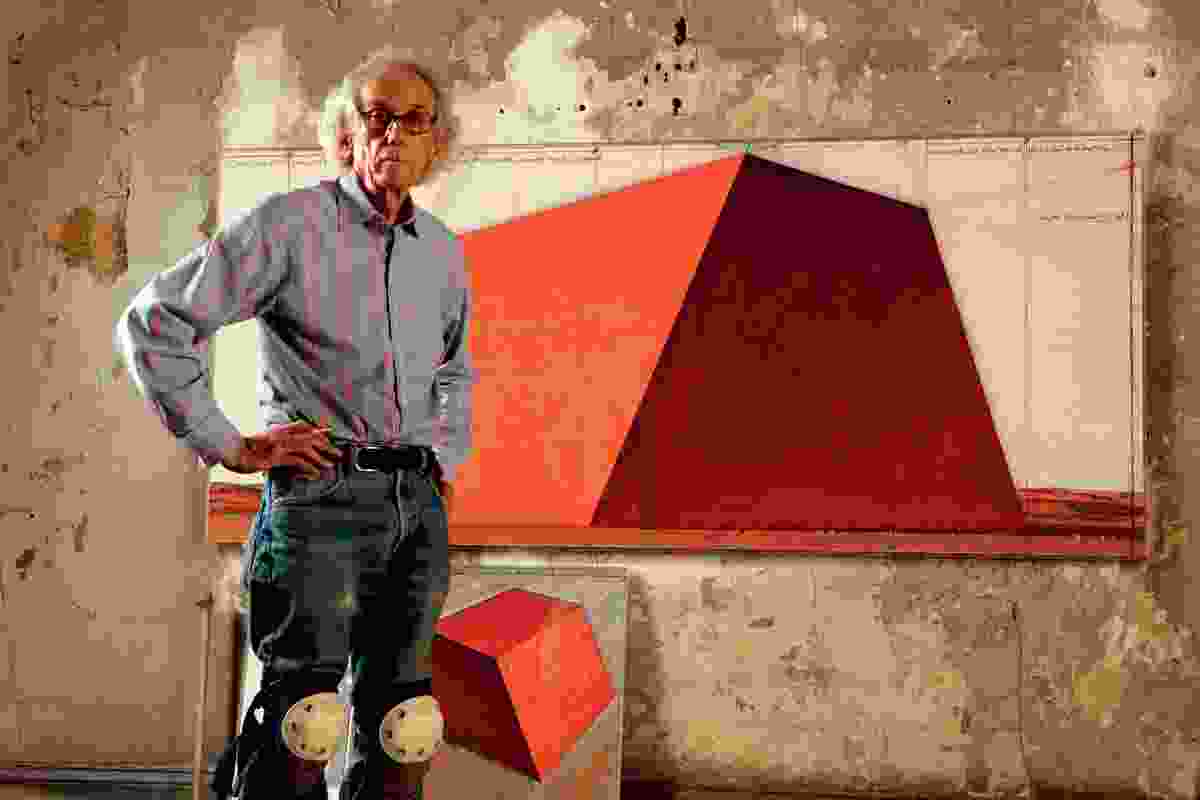 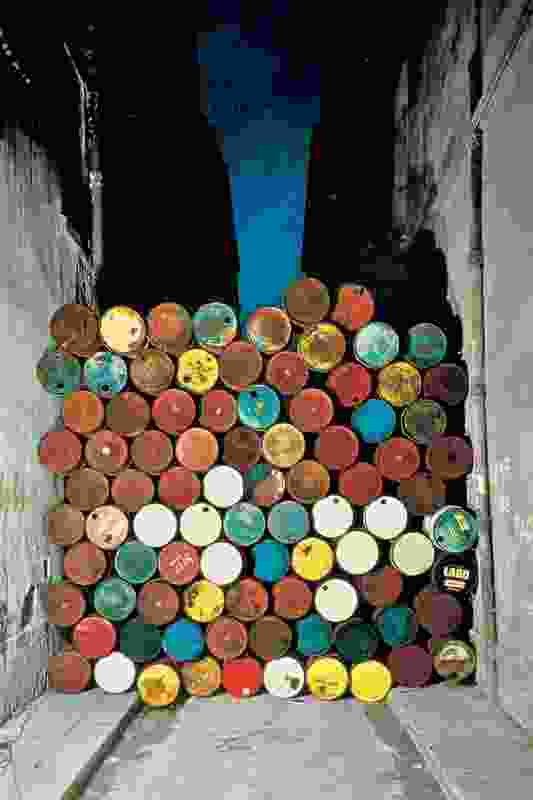 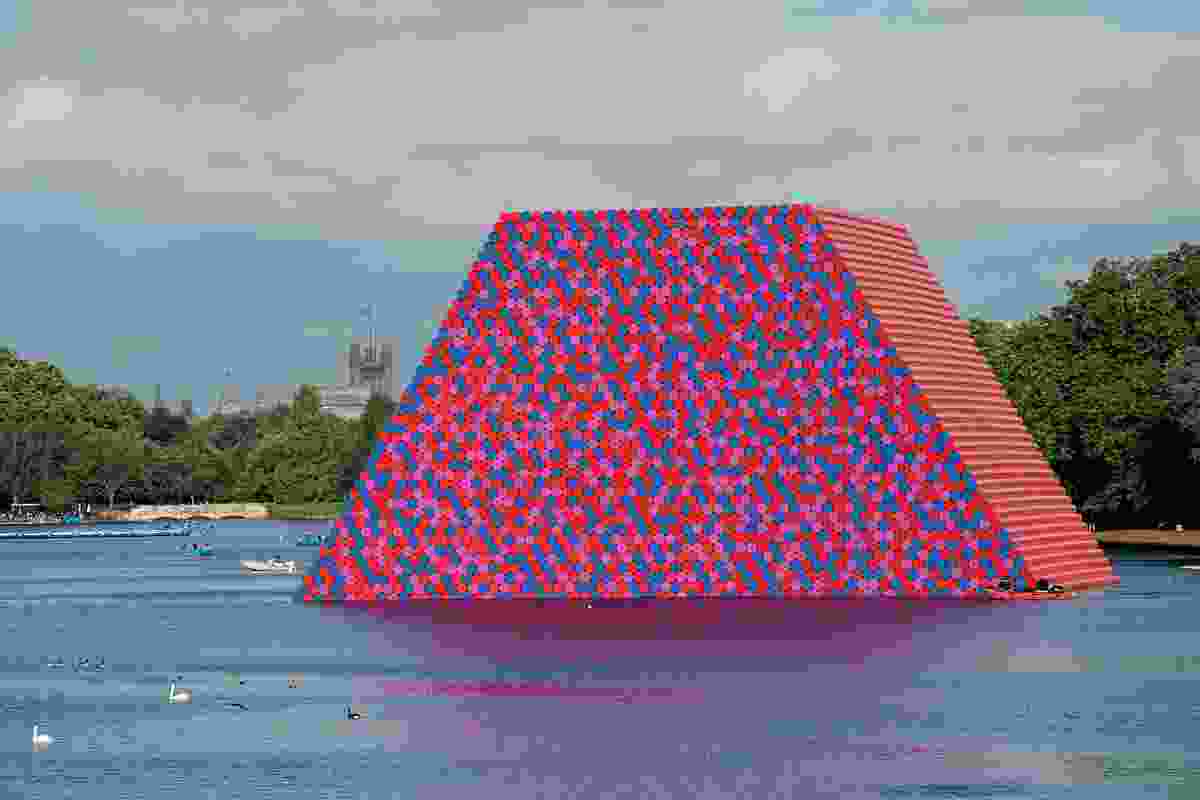 The London Mastaba – a floating platform of wrapped oil barrels, moored on the Serpentine Lake, Hyde Park, 2016–2018 – is the first installation in London by Christo and Jeanne-Claude. 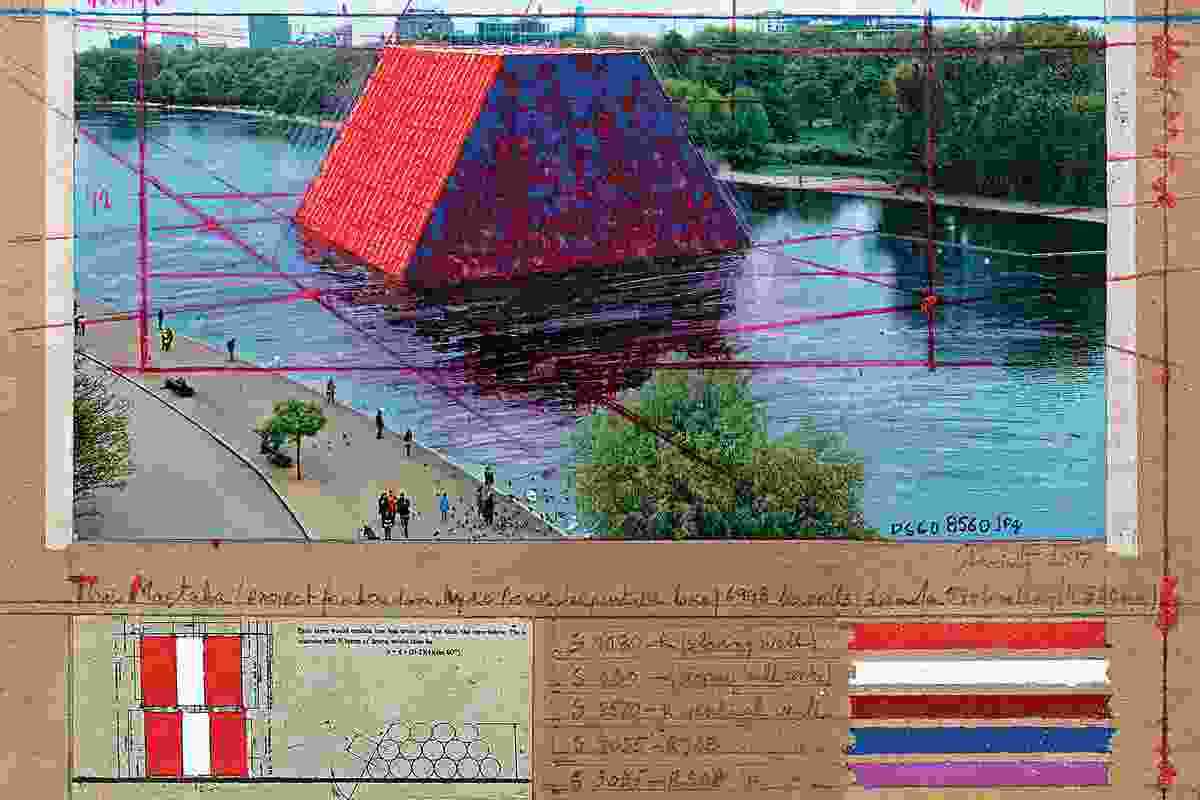 Christo’s collage (2017) for The London Mastaba. 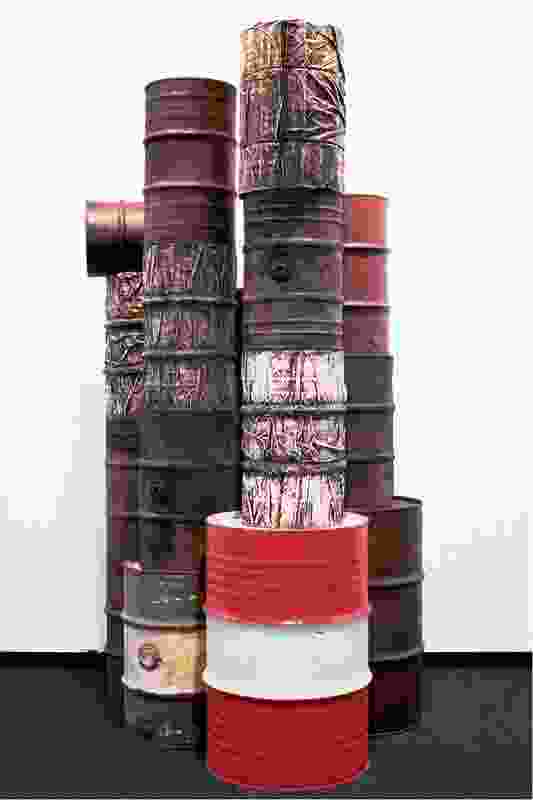 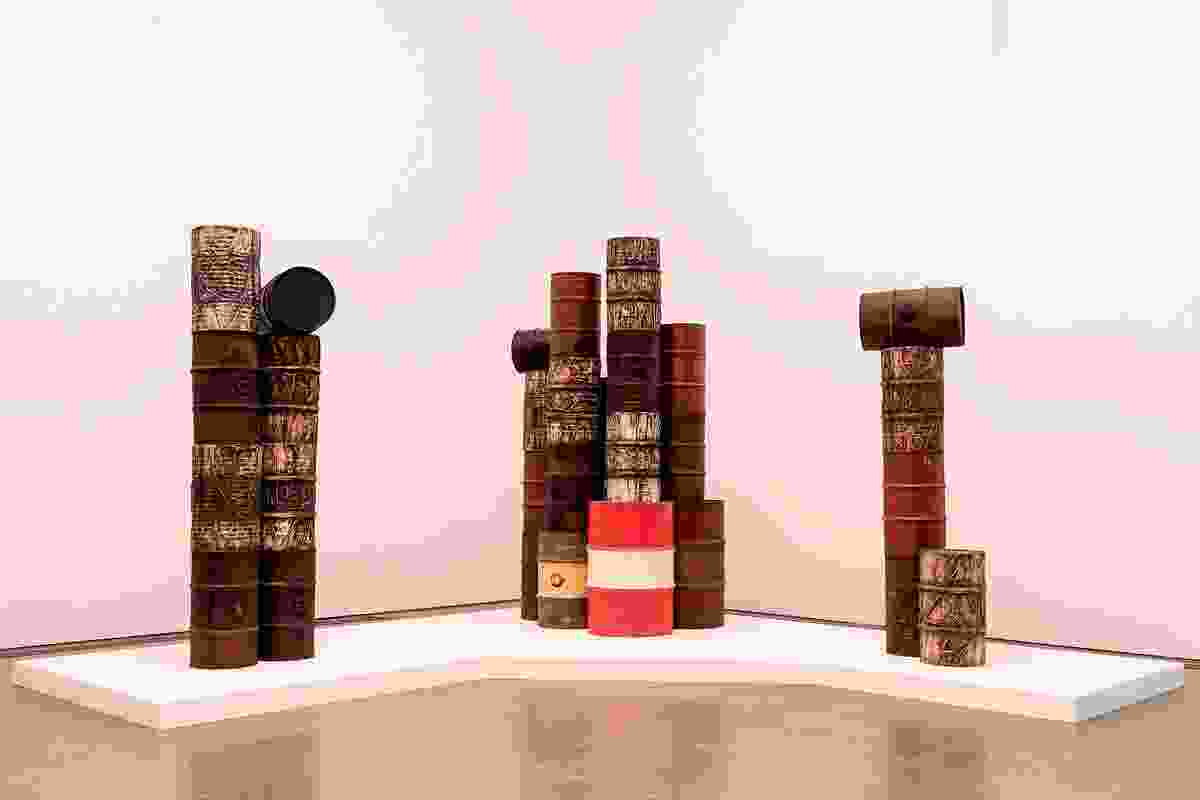