A former factory is the shell of this Melbourne residence, now housed above a boutique office space. Seamless detailing conceals the mess of daily life and gives the impression of ample space.

The grassed courtyard on the residential level of the factory.

The Sunrise Confectioners Factory project, designed by Jolson and located in Greville Street, Prahran, in Melbourne, is an exercise not so much in problem solving as in question answering. T he biggest of these questions is: how do you provide an integrated professional office and substantial single dwelling with an equally substantial garden, in an inner-city suburb? The answer, apparently, is to find an appropriately sized former industrial property in a good location and literally raise the roof on a new occupation of the site.

If you can also use it to showcase the design techniques developed in a select architectural practice focusing on high-end residential and commercial design, so much the better. The results speak for themselves and this residence is a place of abundance - abundant space, abundant natural light, abundant architectural detail and abundant views. Combine this with a wealth of art, photography and stylish furniture and you have a framework for a prosperous, inner-city designer lifestyle that would be the envy of many.

The former Sunrise Confectioners Factory forms the shell of the residence, and its patinated facade provides a textured and weathered face for a pristine interior. The site has been redeveloped over three levels. The ground level contains Stephen Jolson’s architectural practice, within a small boutique office space; the first and second floors contain Stephen’s own dwelling; and a substantial grassed garden is located on the first floor adjacent to the living room, which spills out onto it.

The living space occupies the entire first floor and is open plan, with the exception of the playroom tucked neatly out of sight behind the fireplace wall. This theme of visual concealment by physical separation or other means is repeated throughout the house and is applied at the scale of whole rooms and joinery, and at most scales in between.

An enormous dining table, formerly belonging to Stephen’s parents, is the first item encountered in the living space. Its patina and gently scarred surface provide a warmth that the interior might otherwise have lacked. The table is paralleled by a stone kitchen bench, a monolithic piece of joinery with a shapely kitchen sink sunk into its surface. Standing at the sink, one is at the heart of the house, with a commanding view of the living space and the garden. A pixellated photograph of the old confectionery works forms a sliding screen that conceals the cooktops, preventing them from spoiling the pristine appearance of the space.

At the end of the kitchen joinery is the lounge area proper. No screen or barrier separates this space from the kitchen and dining; spatial zoning relies on the many metres between focal points of activity. When things are far enough apart, open plan works a treat. A wide, attractive fireplace dominates this space and, on digital command, a flat screen television can be coaxed out of the wall above the wood box. The surround-sound system that accompanies the television is concealed behind the plasterboard, with no visible parts.

Many aspects of the dwelling are automated in this fashion using a C-Bus system, which controls lighting, blinds, security, the bubbling water feature and even the fire pit in the garden, which can apparently be ordered to burst into flames on demand. The C-Bus system is of a type that Stephen has included in many client projects. There is certainly something convenient about an ability to shut the house down from the front door with the touch of a single button, even if there is something inescapably Jacques Tati-esque about the whole thing.

Upstairs the theme of ample space, of the irrelevance of spatial constriction, continues. Everything is laid out in a spacious and simple manner, children at one end of the plan and parents at some remove at the other. A gymnasium sits at the eastern end, above the broad, shallow stair that links the lower and upper dwelling levels. The view from the upper levels is sweeping, and the shell of the old factory serves to block out in-looking neighbours. This project might be in Prahran, but it seems perched just above the city, with the skyline stretching away to the west.

The attainments of the project are not available to every architectural client, let alone every home owner, but to those so inclined and equipped, the house is a model of generous amenity and seamless detail. The design of the interior provides for effortless concealment of the mess and detritus of daily life, and the result is a series of visual tableaux that approach the pristine world of the magazine page. Whether this serves as a model for contemporary living is a question for another day; that it is a model for comfortable, even luxurious living is without question. 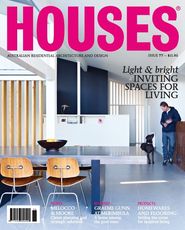 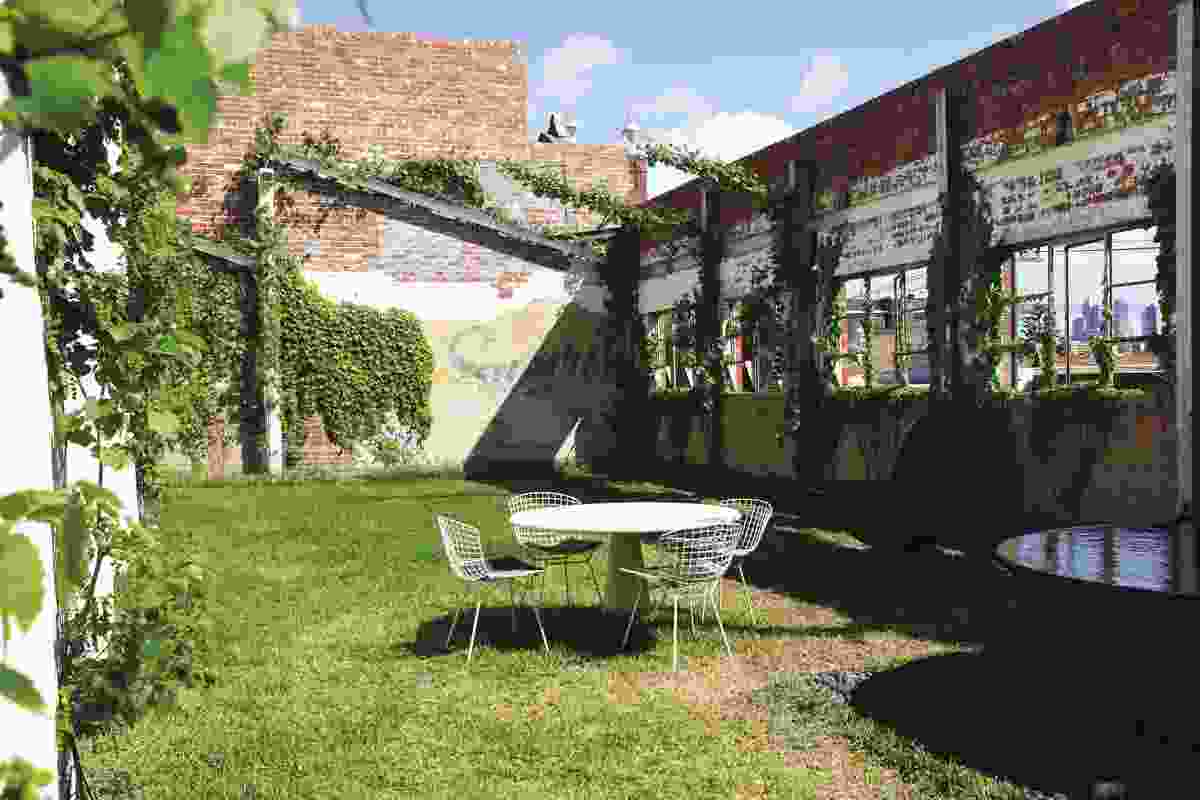 The grassed courtyard on the residential level of the factory. 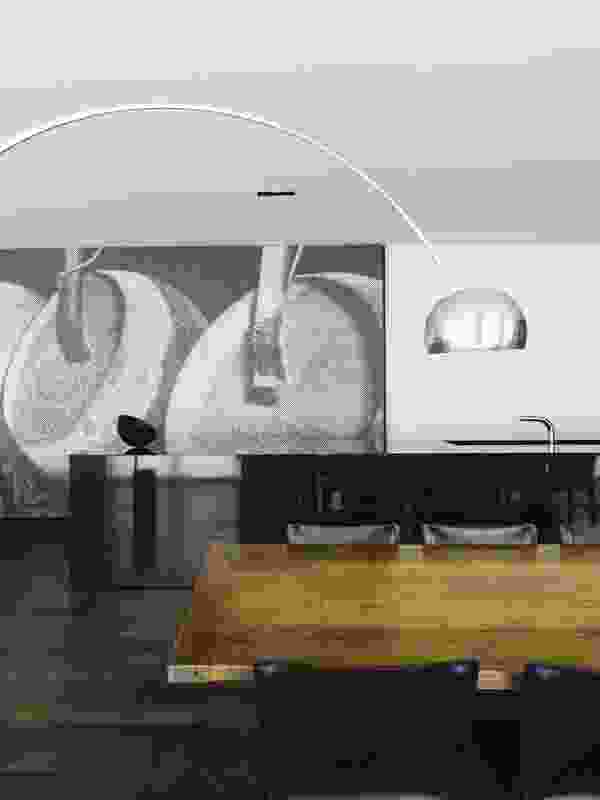 A pixellated photograph of the old confectionery works forms a sliding screen that conceals the cooktops in the kitchen. 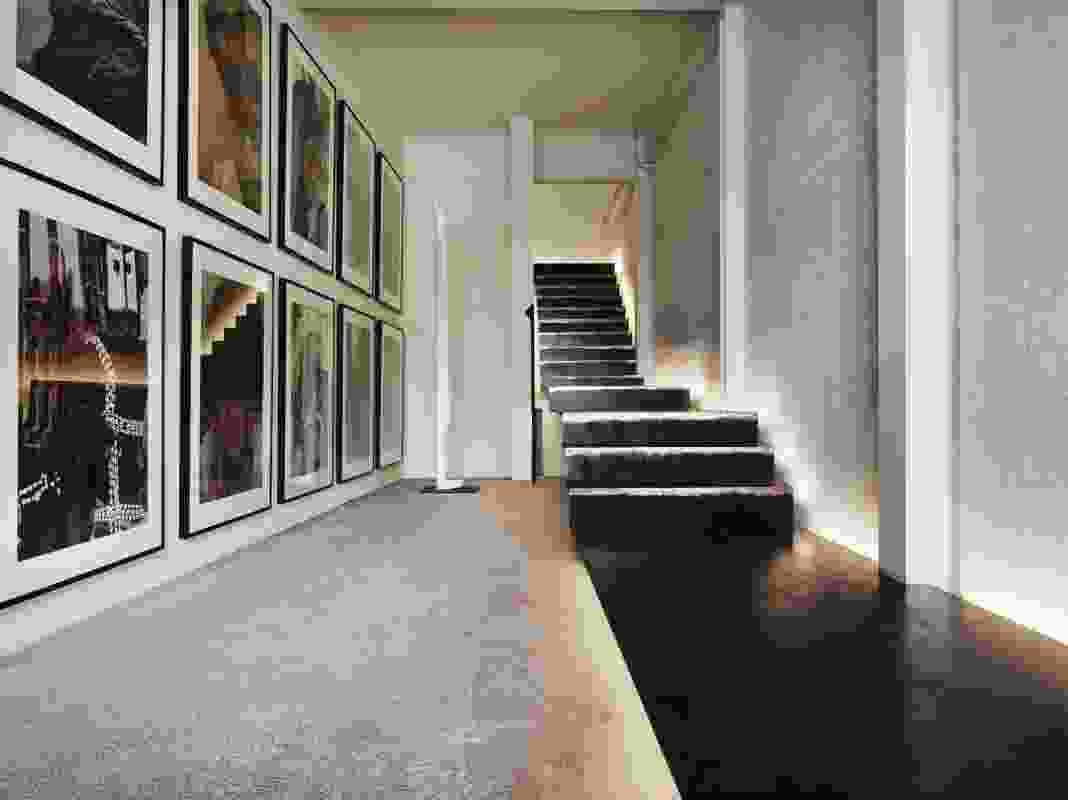 The stairwell forming the entry to the residence on the upper levels. 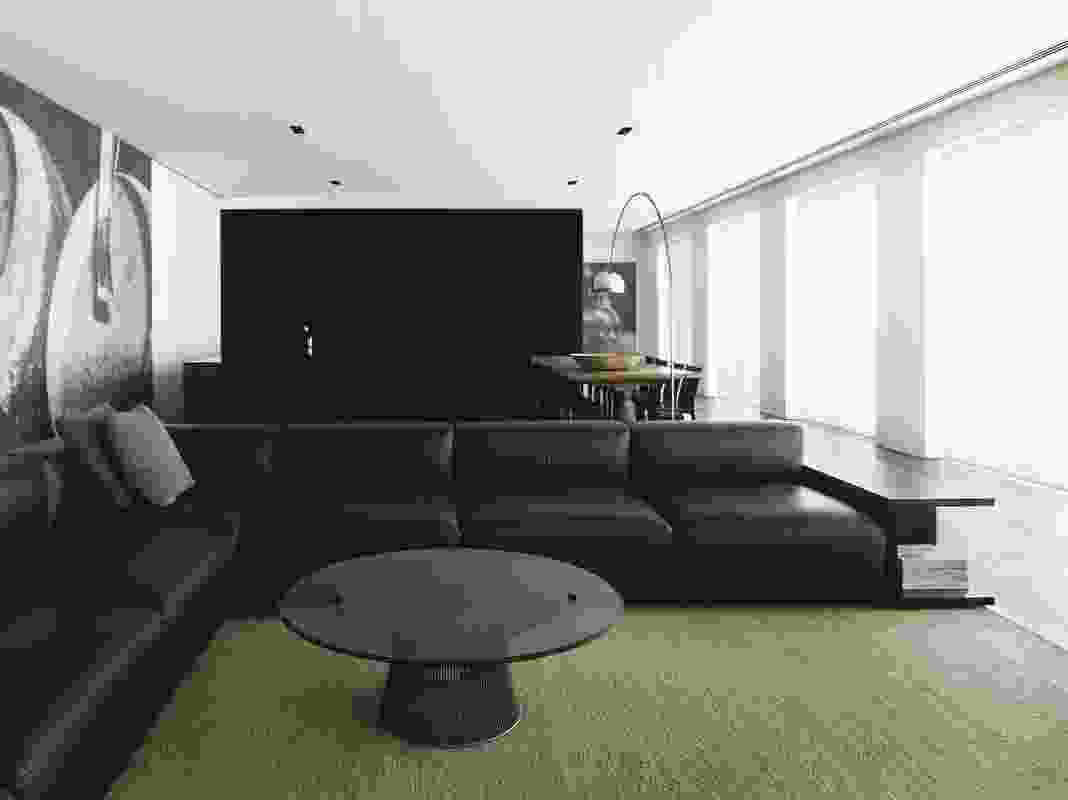 The open planning of the living area gives a sense of ample space. 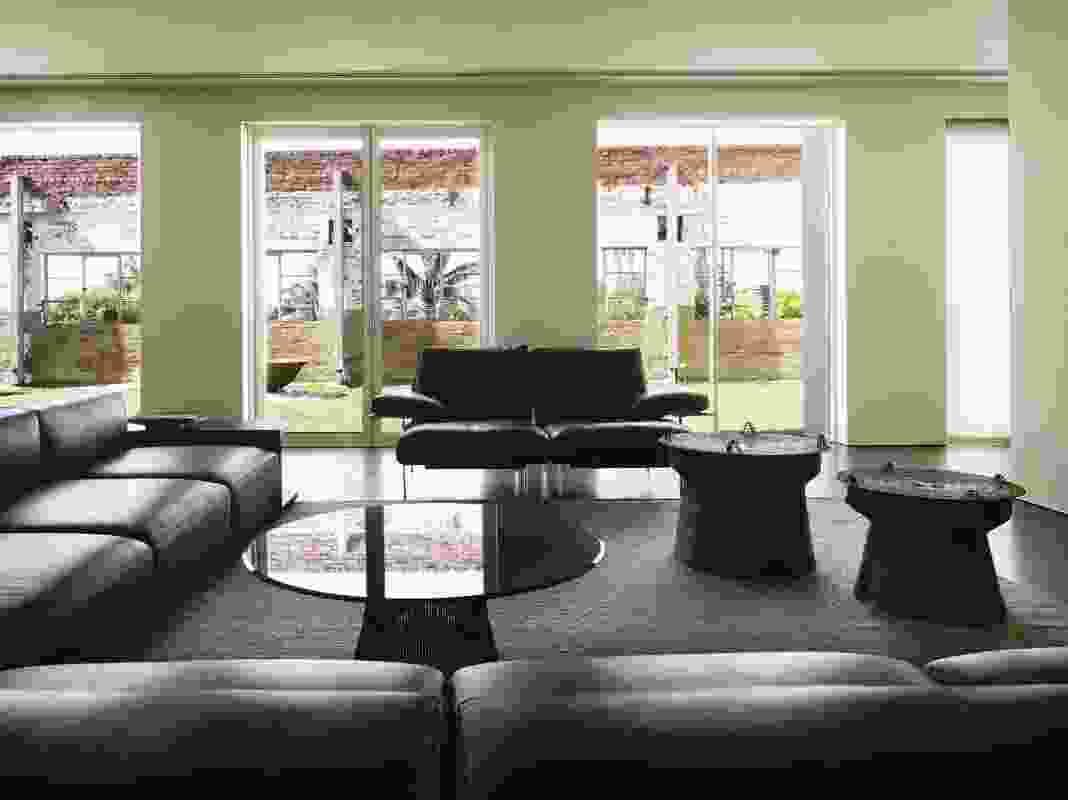 The living room looks out onto a grassed courtyard. 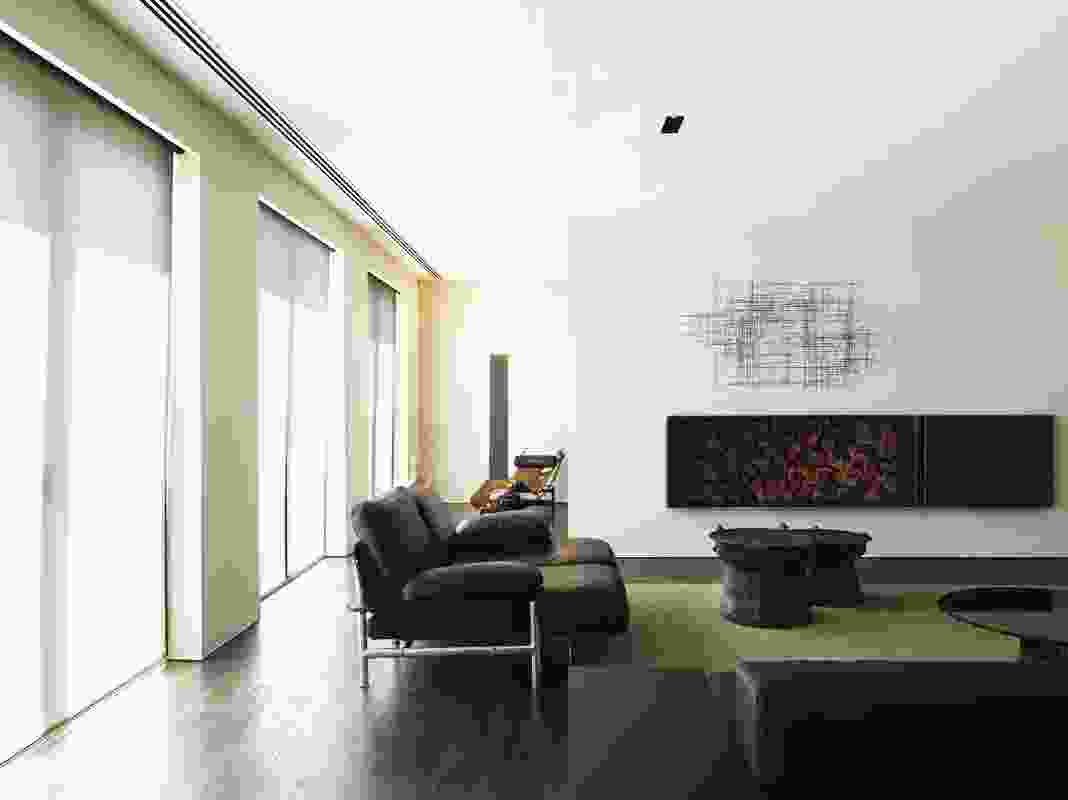 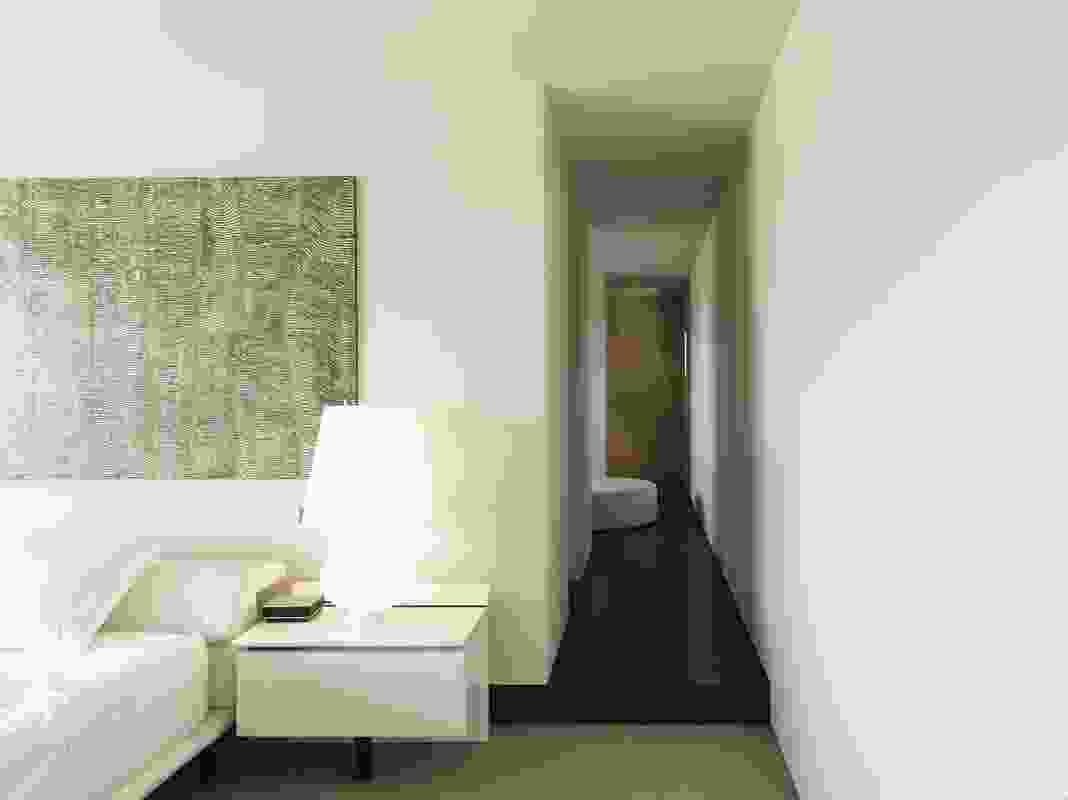 The main bedroom on the upper level. A simple material palette has a striking effect. 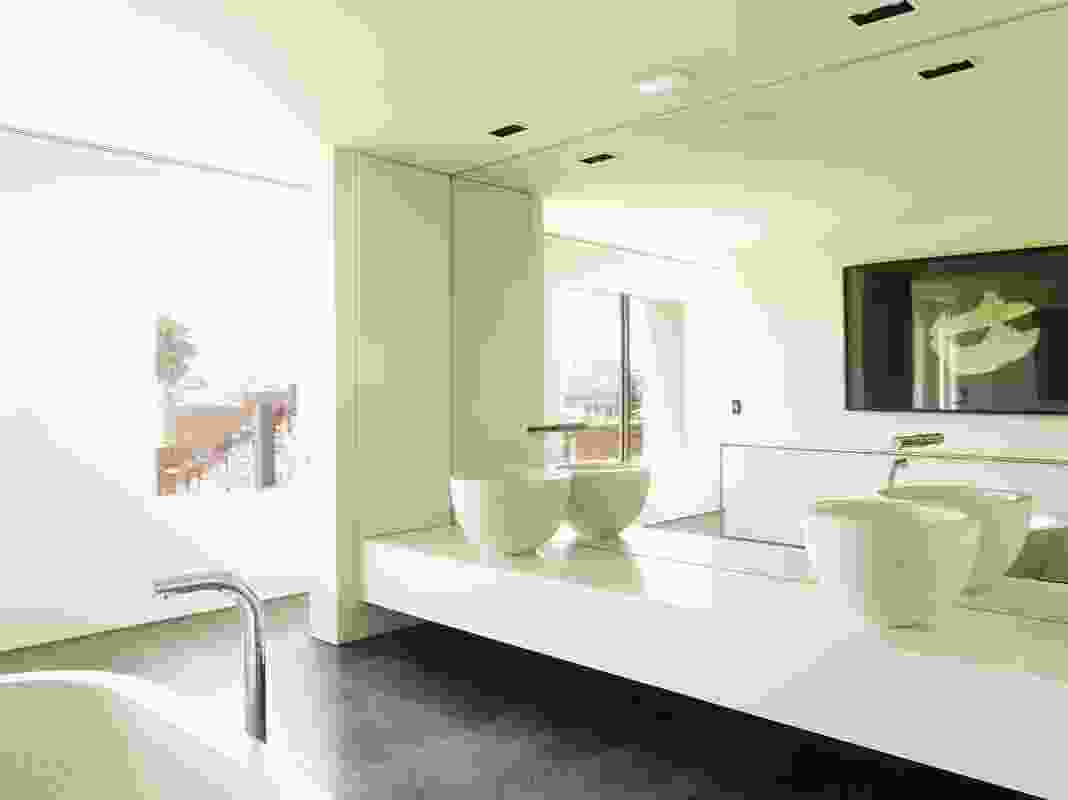 A luxurious ensuite to the main bedroom is washed with natural light, and the use of mirrors gives a sense of endless space.