Underpinned by the ethos and architectural language of the Sunshine Coast, this new hospital by Architectus and HDR is a robust response to operational and climatic requirements.

The Sunshine Coast, to the north of Brisbane, has long been recognized for the laidback coastal lifestyle it offers, in contrast to the faster pace and racier reputation of the Gold Coast to the south. Despite the relatively small size of its individual townships, the overall region is the ninth largest populated region in Australia. The latest facility to be added to strengthen services across this regional network is the $1.8 billion Sunshine Coast University Hospital (SCUH), located on a twenty-hectare greenfield site in Birtinya, a suburb in the unofficially named Kawana Waters area between Caloundra and Mooloolaba. Although Kawana Waters is now far larger than the original Kawana Waters development, it is yet to become a fully-fledged town. Until the projected development of the Kawana Town Centre adjacent to the hospital becomes a reality, along with a proposed railway link and the upgrade of the existing Kawana Way to a four-lane highway, the new hospital and its ancillary facilities stand free in a setting framed by melaleuca forests to the west and the coastal fringe to the east on the floodplain of the Mooloolah River.

The architects of the Sunshine Coast University Hospital, Architectus and HDR, established a joint venture as members of the Exemplar Health consortium led by Lendlease. The public-private partnership project was won through a competitive selection process that required bidders to present fully developed schemes. These were guided by a masterplan prepared by Conrad Gargett with MAAP and Deicke Richards and by a reference design prepared by Conrad Gargett. The design approach adopted was anchored by an unshakeable relationship with the ethos of the Sunshine Coast and its contemporary architectural language, as illuminated by the works of the Sunshine Coast school of architects, including Gabriel Poole, Lindsay and Kerry Clare and John Mainwaring.

Underpinning the organization of the hospital are robust and decisive judgements in response to site and setting and a rigorous understanding of operational requirements. A north–south axis is anchored by the green spine of the major open courtyard that divides the hospital into two principal blocks. The three-storey East Building is the narrower of the two and houses clinical facilities, including the Adem Crosby Centre cancer clinic, along with research and training facilities. The simply defined, regular, linear form of the block is modulated along the length of its street frontage by the filigree patterning of screening battens, the projecting floor slabs, the ordering of the glazed openings and the mosaic of the coloured cladding panels. The six-storey, deep-plan West Building houses the principal diagnostic and treatment functions along with pathology, rehabilitation services and the maternity centre on the upper levels, with associated in patient rooms looking toward the hinterland to the west. Light penetrates the depth of the plan via four light wells rising through the full height of the building, echoing the contribution made by the main courtyard. The Facilities Management Centre and the nine-storey public carpark aligned along the western boundary shield the core of the hospital from traffic noise and the western sun.

The three storeys of the principal inpatient wards are organized into two pairs of L-shaped units, the longer leg of each spanning from the West to the East Buildings across the main courtyard as twinned, narrow, single-corridor “fingers.” Many of the patient rooms offer a view to the ocean beyond, to the immediate landscape and to the planting within the main courtyard. The narrow plan of each ward enhances the availability of natural light and was envisaged to allow natural ventilation, although this ambition was ultimately ruled out for clinical reasons. The arrangement of the wards provides for a number of efficiencies, including the co-location of the public lifts and the positioning of the ward support spaces on the common circulation spine to enable a supervisory view through the length of each ward.

The establishment of such a large tertiary hospital, removed from a thriving urban centre, has entailed the need to build its key clinical staff. Medical specialists and personnel have had to be attracted from other regions and other health systems. Similarly, the essential support staff had to be attracted and trained while the working patterns for the hospital are shaped. The description of the hospital as a “university” hospital signals the importance of an integral relationship between medical care and teaching, training and research. In part, the necessary training is provided by embedding teaching programs from the University of the Sunshine Coast and from TAFE, marshalled through the hospital’s Skills, Academic and Research Centre.

Arrival for most patients and visitors will be through the open forecourt, accessed from the northern approach. Titled the Outdoor Room, this entry court offers a memorable meeting and orientation place for the hospital and a significant civic space for the wider community. It links the body of the hospital to the south with the drum of the freestanding Health Institute and Auditorium, called the Hub, to the north. The forecourt is open to the sky and framed by a two-storey-high colonnade on all four sides, providing both shelter and filtered shade to link the Hub and its activities to the entry portico of the hospital. Despite the size of this refined and generous public space, it possesses a reassuring directness that captures the sense of the indoor/ outdoor relationship common to the relaxed ease of the architecture of the region.

Entry to the hospital from the forecourt is directly into the double-height internal Hospital Street running the length of the major, landscaped courtyard. Although the hospital is not yet fully operational, this main street is busy and active, lined with retail outlets, service providers, cafe facilities and open bays of seating. These combine to animate and catalyse the social life of the hospital, in direct contrast to the prosaic regimentation once associated with a visit to a public hospital.

The sociability offered by the Hospital Street is reinforced by the extensive courtyard bringing light and visual amenity into the heart of the hospital and providing a green sanctuary for patients and visitors. Visible from many of the patient rooms above, it enhances the experience of the hospital and governs wayfinding throughout the principal public spaces. Ventilation of the court, and of the four light wells in the West Building, is increased by the admission of coastal breezes drawn through the cool subfloor voids under both buildings.

The Sunshine Coast University Hospital is the third new tertiary hospital to be built in recent years in Queensland. Along with the Lady Cilento Children’s Hospital in Brisbane and the Gold Coast University Hospital, it offers the best of contemporary healthcare in the service of the community at large. Further, the nature and scale of the SCUH will have a fundamental effect on the ordering of urban growth in its region. It has attracted and will continue to attract clinicians, medical staff and research teams – and their families. Its scale, organization and refined palette of materials, colours and screening elements exemplify how even the largest and most complex facilities can embody and respond to the nature, characteristics and strengths of their physical and cultural settings. 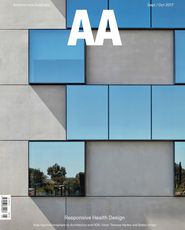 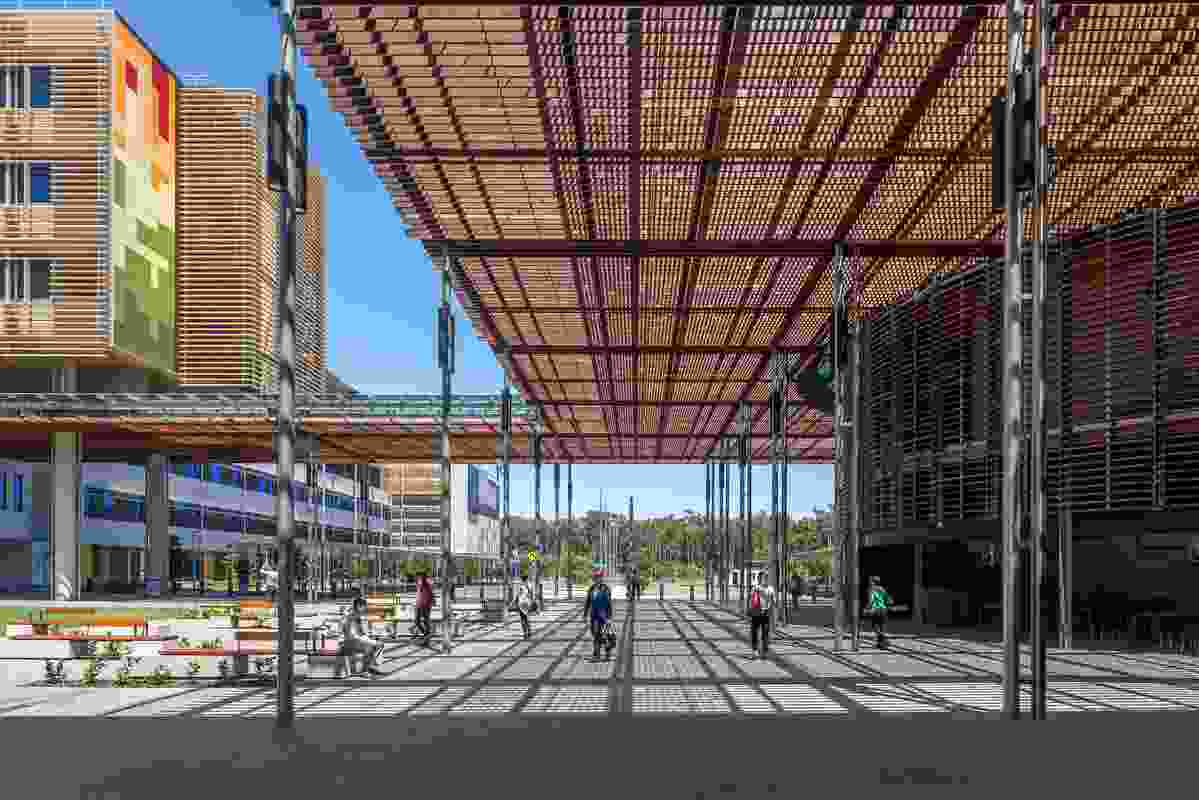 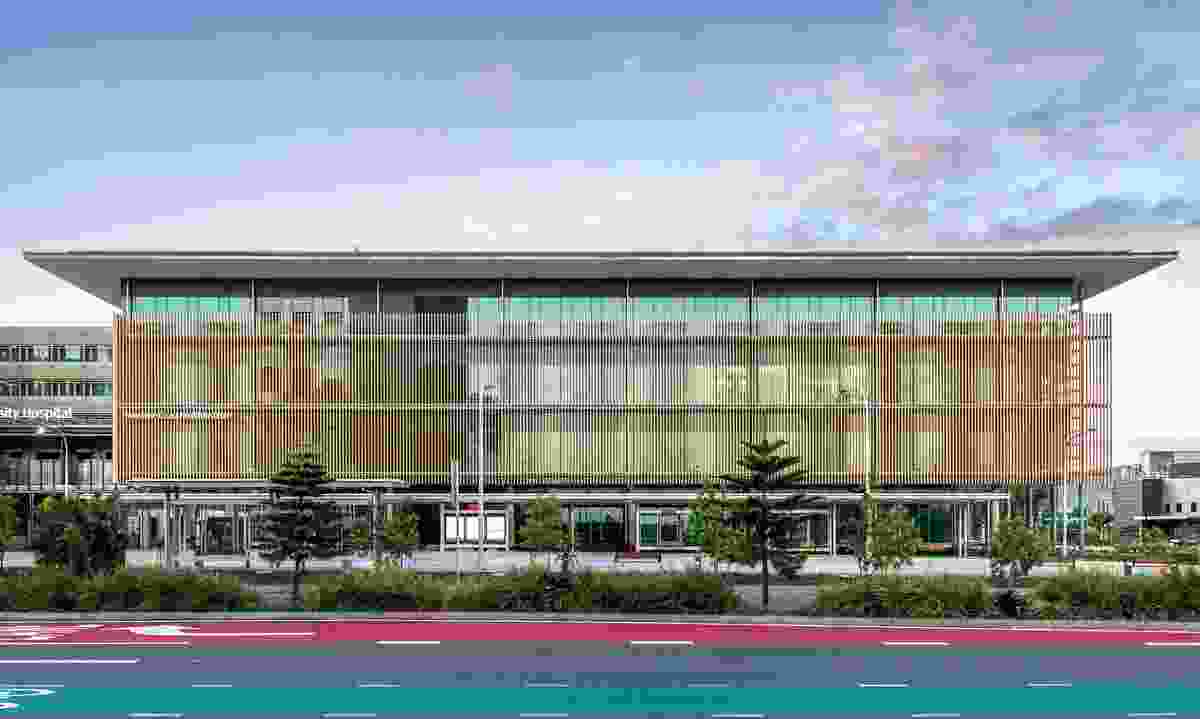 The form of the three-storey East Building is modulated along its street frontage by vertical screening battens. 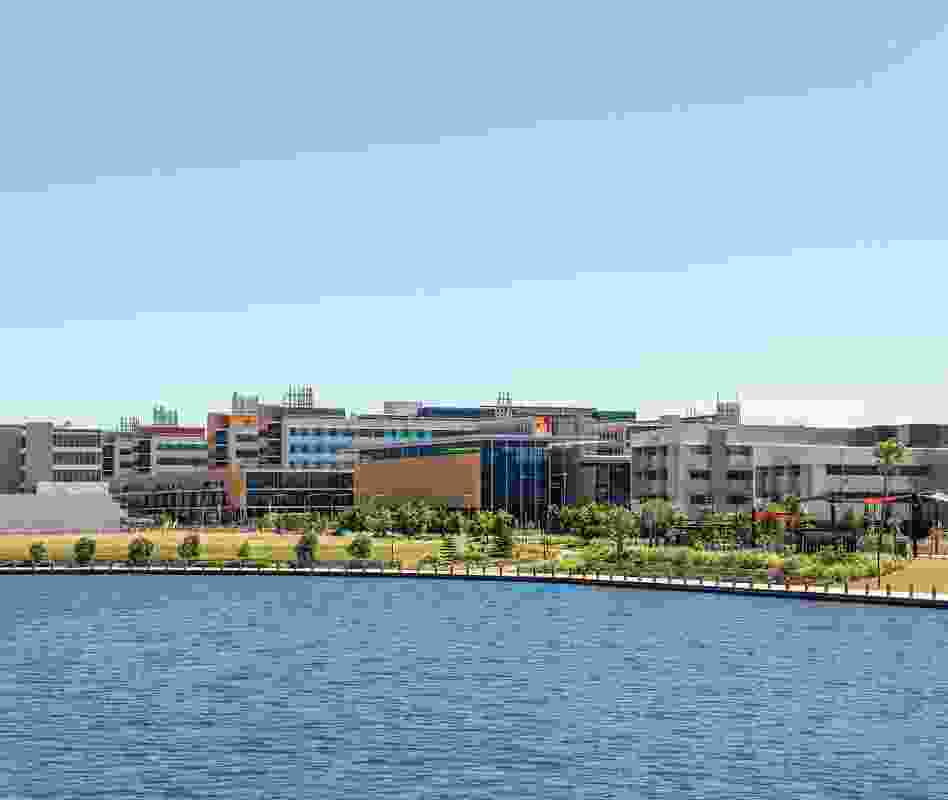 The hospital stands free in a setting framed by melaleuca forests to the west and the coastal floodplain of the Mooloolah River to the east. 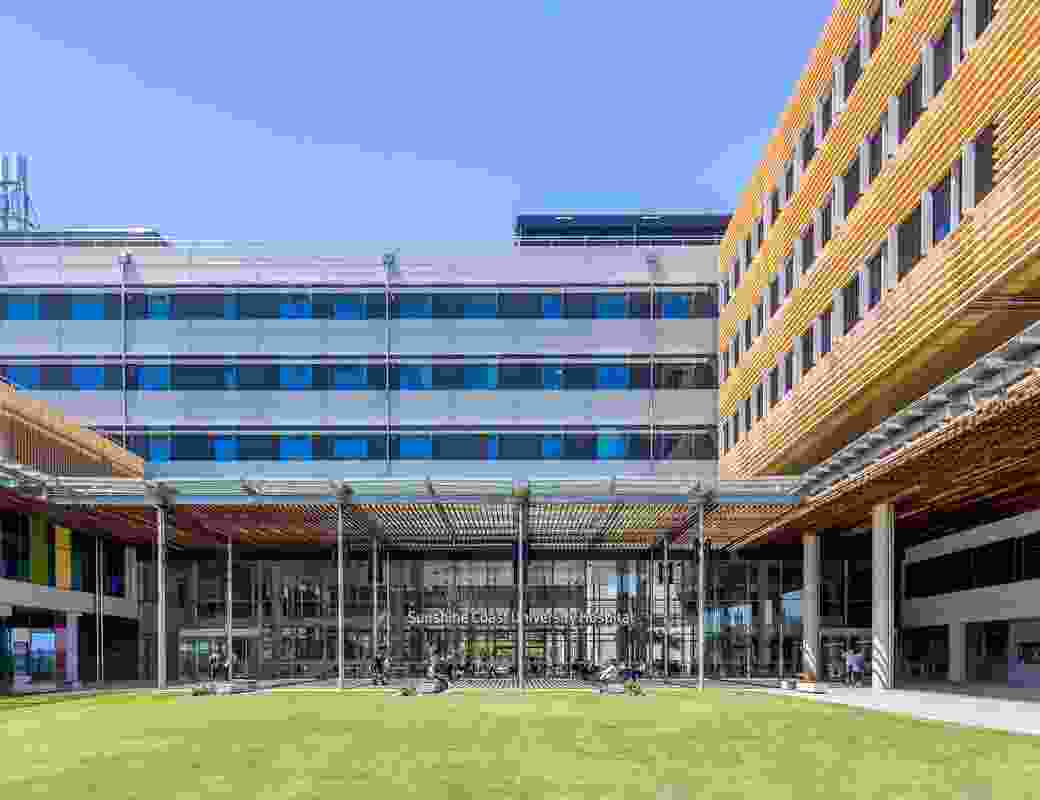 Narrow “fingers” define the building plan, allowing light and views into as many wards as possible. 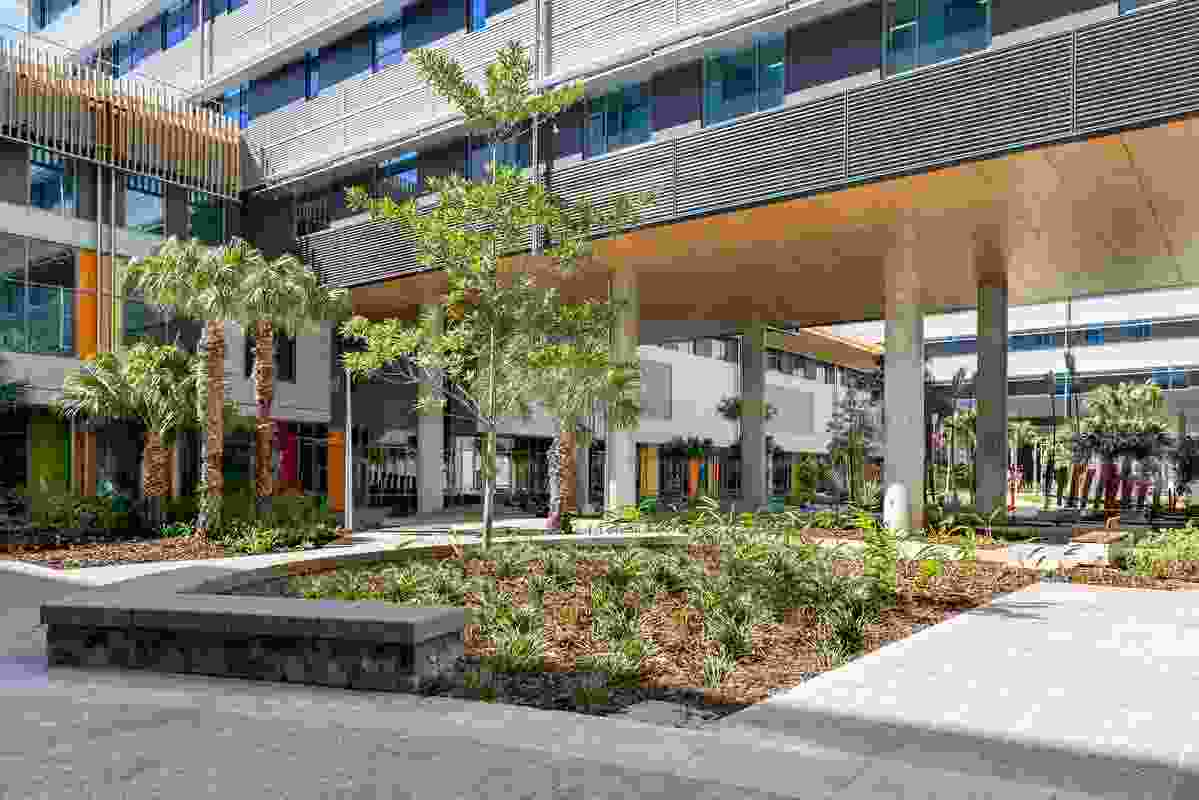 A north–south axis is anchored by the green spine of the major open courtyard that divides the hospital into two principal blocks. 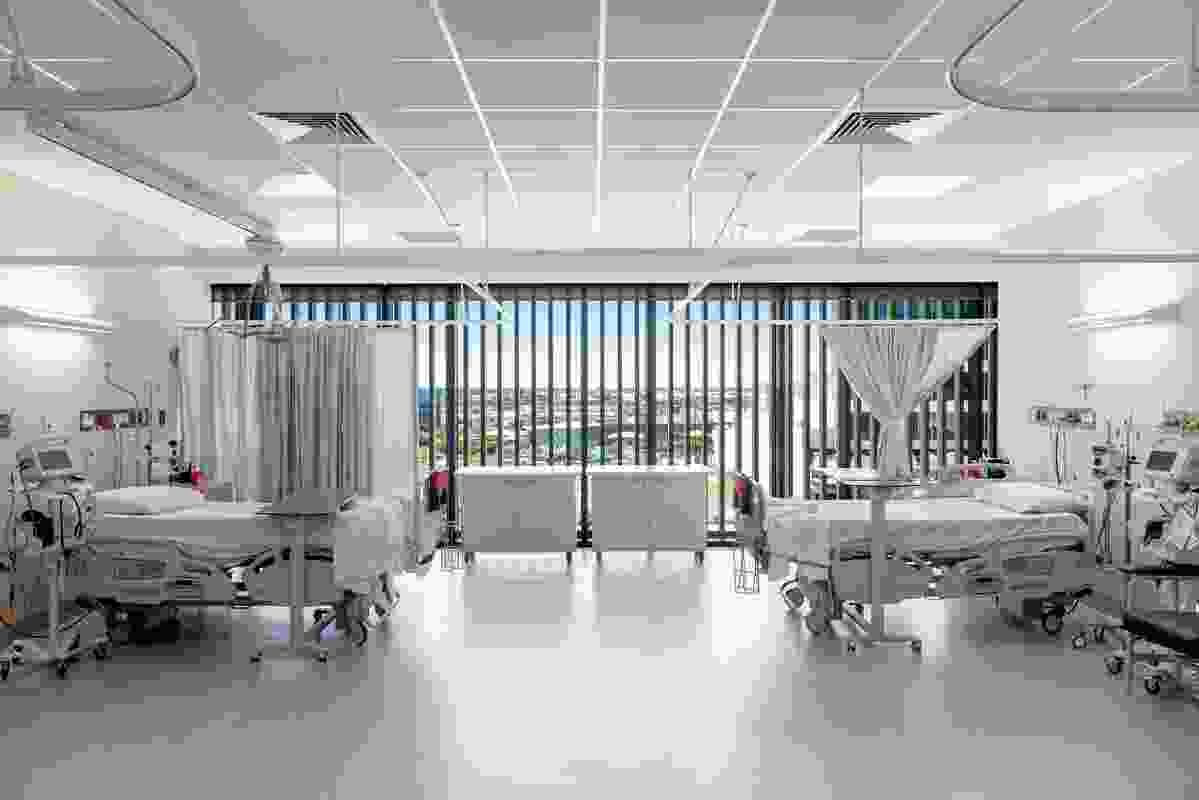 Many of the patient rooms offer a view – to the ocean beyond, to the immediate landscape or to the planting within the main courtyard. 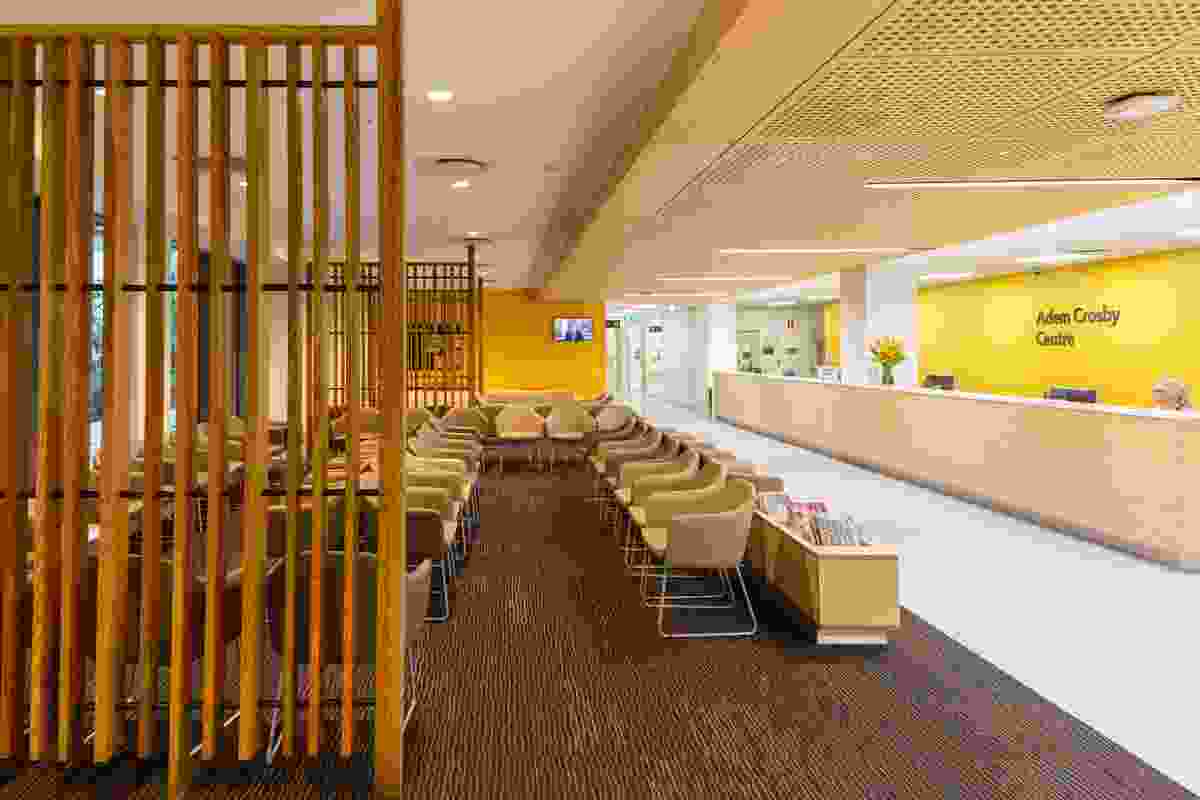 The use of timber, soft lighting and warm colours in waiting areas eschews the sterile treatments common in public hospitals. 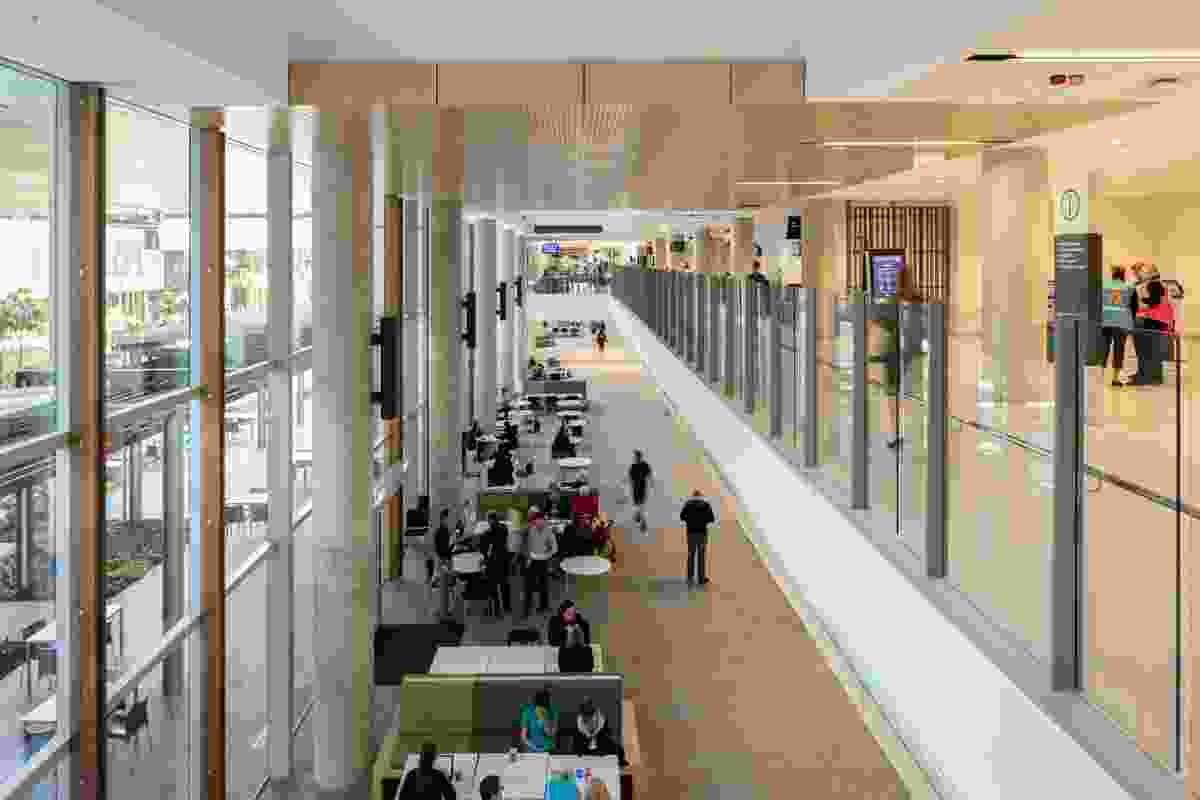 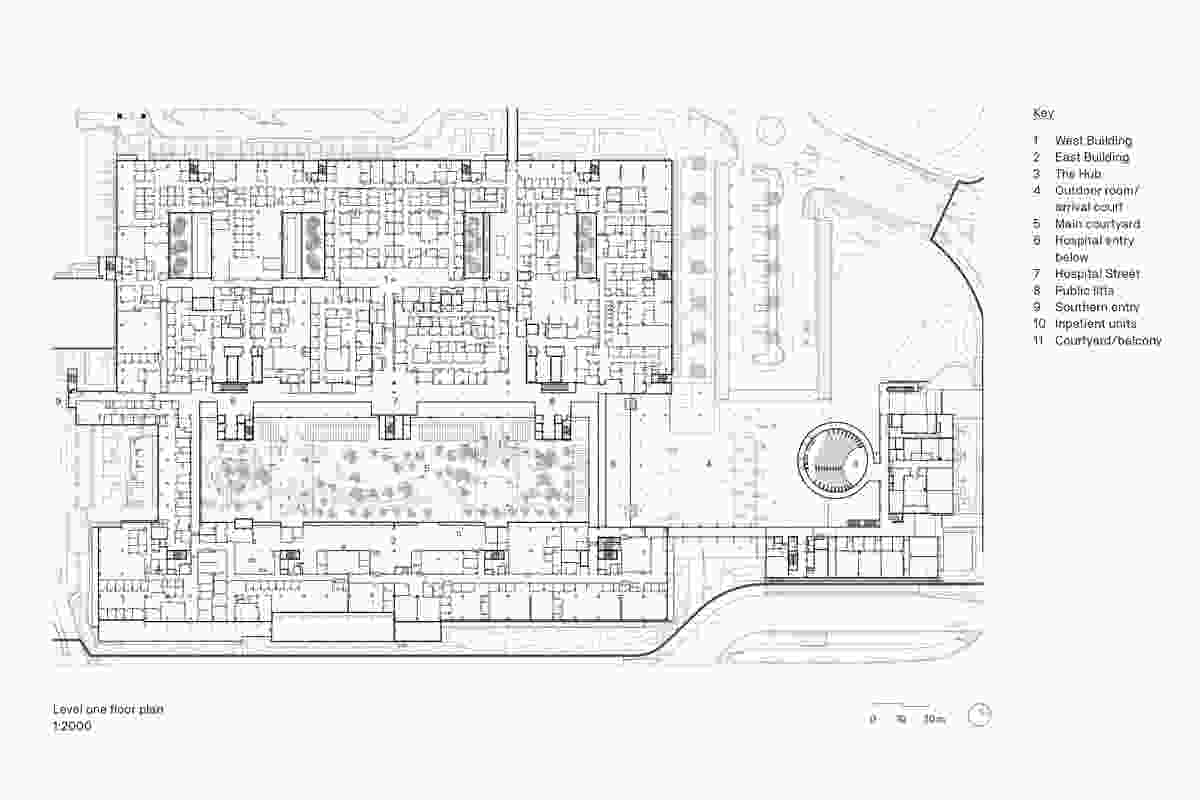 Level one floor plan of Sunshine Coast University Hospital by Architectus and HDR. 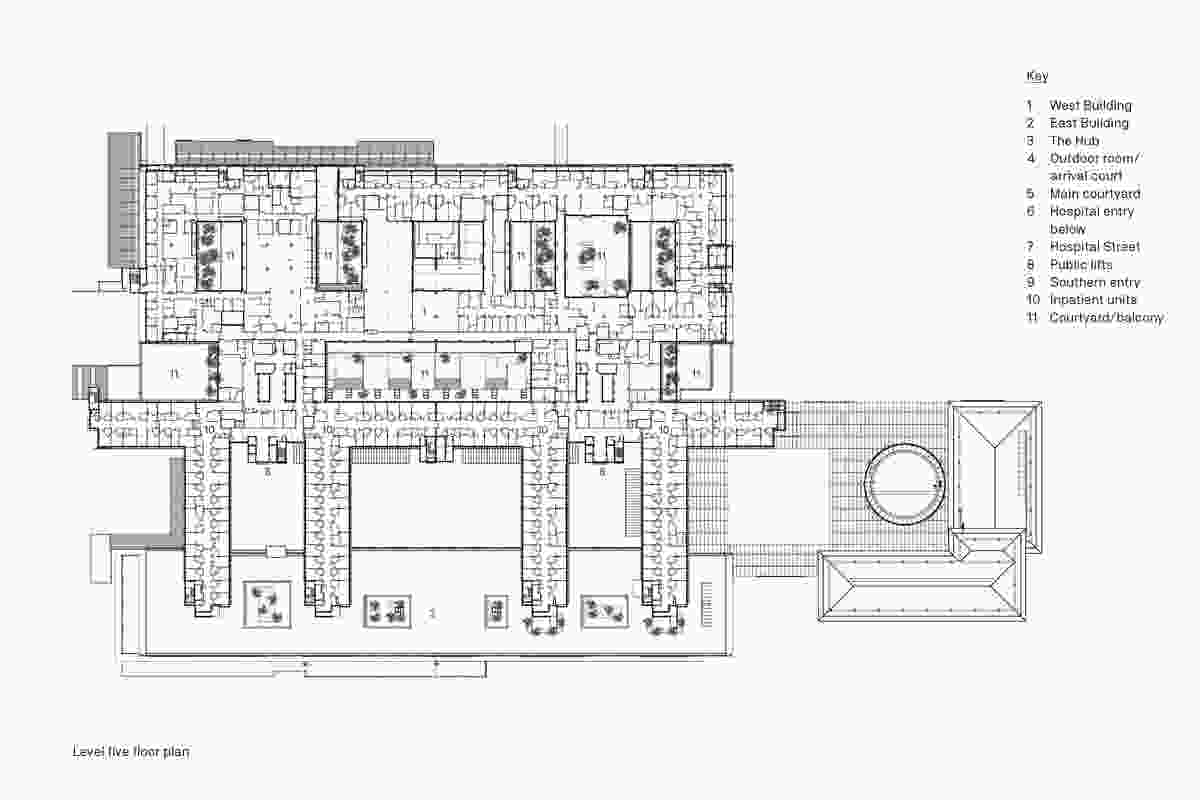 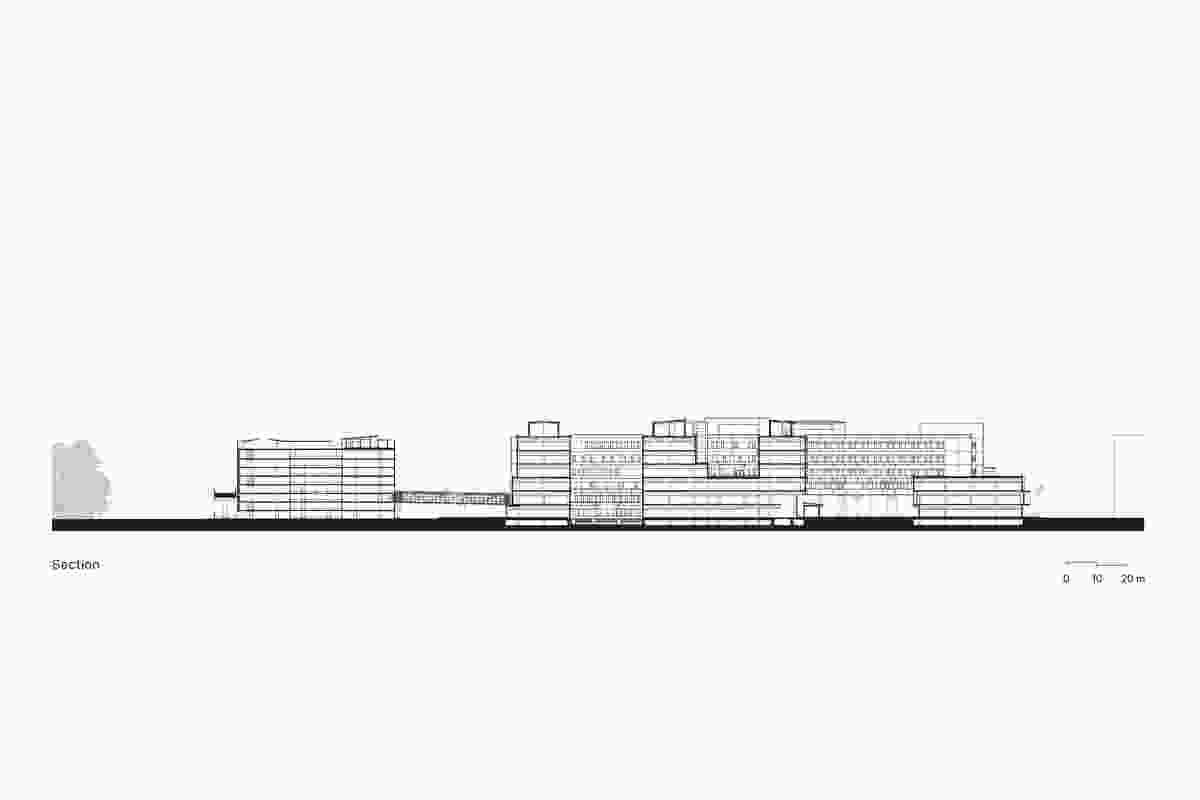 Section of Sunshine Coast University Hospital by Architectus and HDR.