Removed from its urban context, this inner-city terrace embraces the natural appeal and ample light of its garden site.

Inner-city terrace renovations often conform to certain norms. Most seek to retain the heritage value of front rooms, expanding into modernist open-plan volumes at the rear to blur the boundary between indoor and outdoor living spaces.

Paul Brace, director of Jackson Teece, is all too familiar with this style of sleek, minimal alteration and additions. When approached by the owners of a gracious Surry Hills terrace, it wasn’t a surprise to hear of their desire to respect the original formal terrace rooms and replace the “muddle” of rear rooms, which consisted of a 1960s lean-to sunroom, laundry and bathroom, with an ordered kitchen and living space. Upstairs refurbishment called for the conversion of a small third bedroom into a bathroom, plus ensuite for the master bedroom, and the addition of an attic loft.

Jackson Teece’s response to the brief is anything but standard. The project is distinctive on many levels. Notably, the wedge-shaped site splays out to a thirteen-metre-wide, north-facing backyard studded with well-established trees. Rather than graft the extension directly to the terrace, Paul wanted to take advantage of both the width and the depth of the property, and pitched the idea of almost detaching the extension from the house and pushing it toward the rear boundary.

Floating a concrete plinth on subterranean piers supports a light steel frame and glass structure within the garden and puts the focus on a breathable space for relaxed living. Cedar sliding glazed doors on parallel facades allow for flexible access to the garden and cross-ventilation. The extension sits in an asymmetric relationship to the terrace, breaking the rectilinear language of most urban refurbishments. Its form and placement are based on the movement of the sun and on bringing natural light into all living rooms.

“It’s a very simple idea that means the glass box is wrapped on three sides by the garden,” says Paul, and the clients clearly revel in the dappled light that filters through gums and bamboo. A small footprint also minimizes the extension’s impact on the root balls of the stately gums. Situating the skillion-roofed pavilion deep in the garden creates a central courtyard that is critical to the program. It becomes an outdoor room that the clients use all year around, and allows sunlight to penetrate deep into the original front rooms, while the kitchen, living and dining spaces are bathed in natural light.

Paul’s spatial configuration brings the kitchen closer to the skin and provides a strong visual connection between new, old and outdoor living zones. Entrance passage, stairwell and kitchen channel circulation through the house. Maximizing storage was essential to the brief and Paul has equipped the new zone with a unifying element of European oak timber-veneered joinery, which starts under the stairwell, kinks through the kitchen and continues up to conceal bathroom and laundry facilities that anchor the extension to the eastern boundary. “Because the house is a little bit asymmetrical in its angles, it’s a bit more complex, which creates more interest than being rigidly modernist,” notes Paul.

Careful attention is paid to the subtleties of lighting. After formative training with Burley Katon Halliday – which Paul refers to as “finishing school” for young architects and designers – he studiously avoids the “starry, starry night” effect of scattered downlights. His preference for illuminating the pavilion is for uplighting mounted to the charcoal coloured zinc frames.

There is also a determined effort to amplify the connection with nature in the material palette. A deep mocha tint added to the charcoal concrete slab is complemented by a warm black matt finish granite benchtop. Taupe limestone tiles in the bathroom show evidence of fossils. “I didn’t want it to be too slick. It’s a very textured environment, not minimalist in any way,” says Paul.

The palette gives an easy, lived-in quality to the contemporary forms and the new spaces have allowed the house to transition comfortably from a couple’s nest into a family home. “You can meander around the house, through the garden and back in again from any number of doors, allowing for a relaxed, informal approach to living and entertaining,” says Paul. An attic loft provides valuable office space for the owners, who frequently work from home and require a retreat with a vantage point for watching over family affairs.

Concealed behind the untouched terrace facade, Jackson Teece’s innovative approach to plan and pavilion embraces the natural appeal and ample light of its garden site. The assured architectural expression establishes an inviting haven for young family life in a way that feels refreshingly removed from the immediacy of its urban context. It’s a well-kept secret idyll. 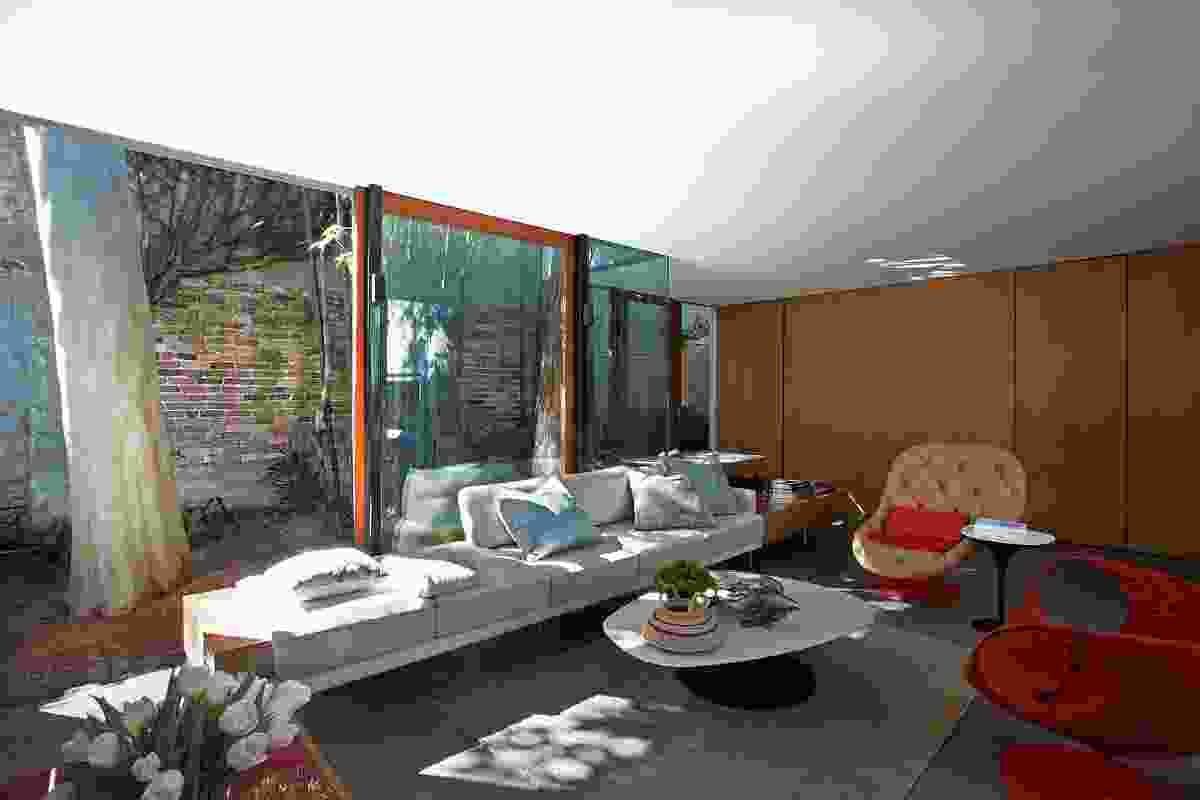 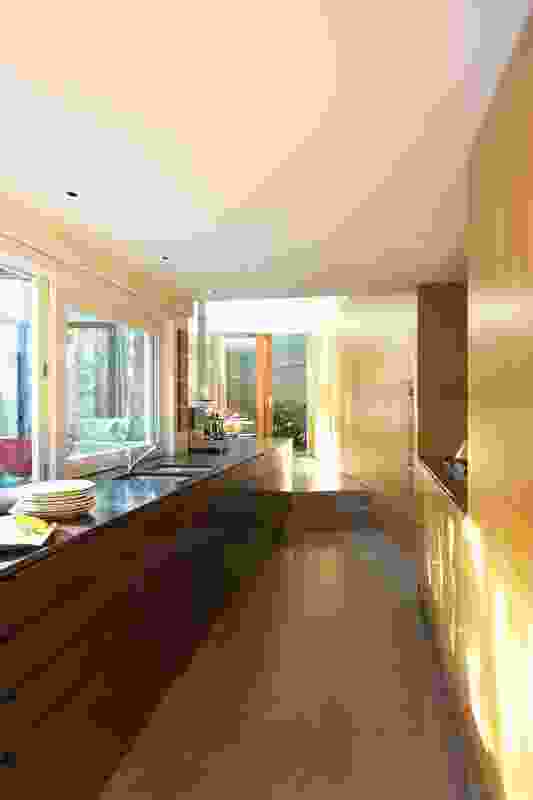 Circulation is via a new cranked, linear kitchen joined to the original house. 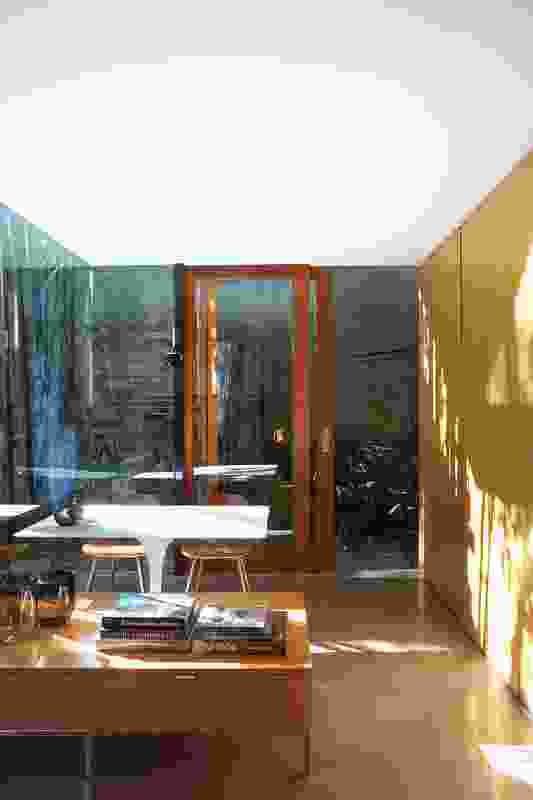 The sunny breakfast area of the living volume. 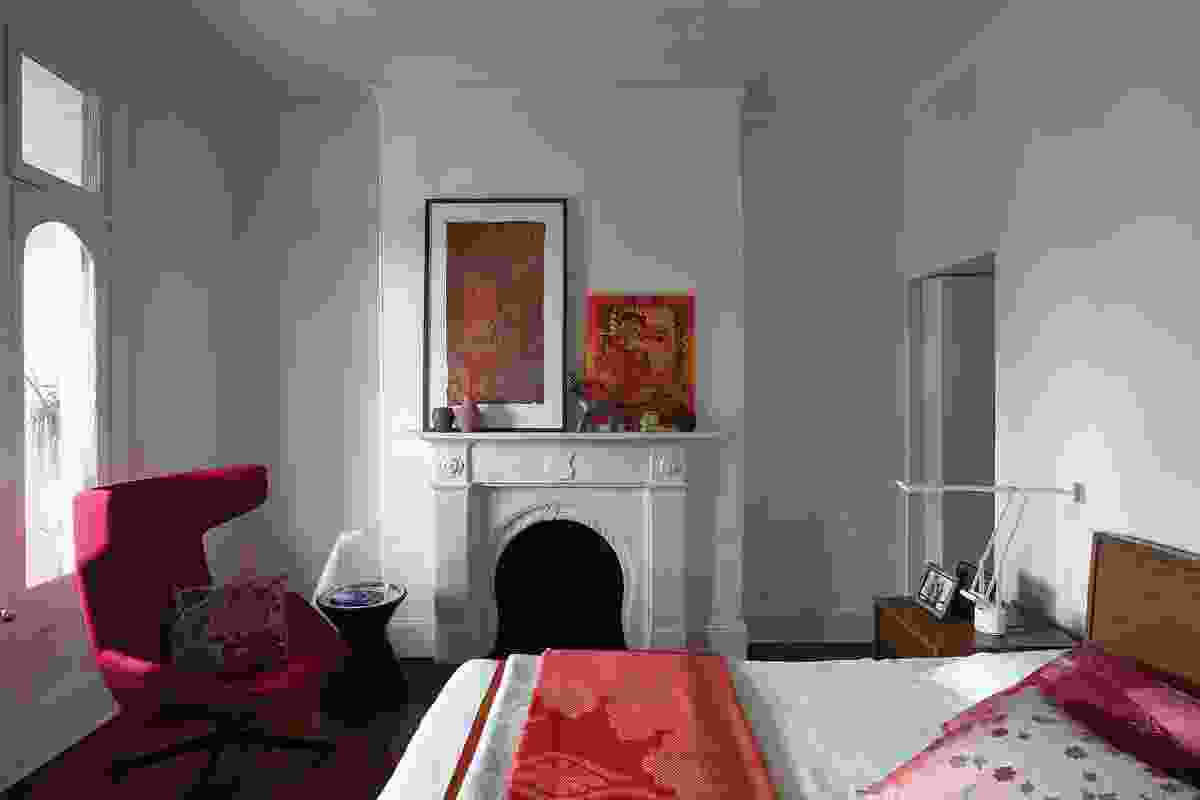 The main bedroom on the first floor is one of the original rooms at the front of the house. Artworks L-R: G. W. Bot, Beaver Galleries; The Luo Brothers, Ray Hughes Gallery. 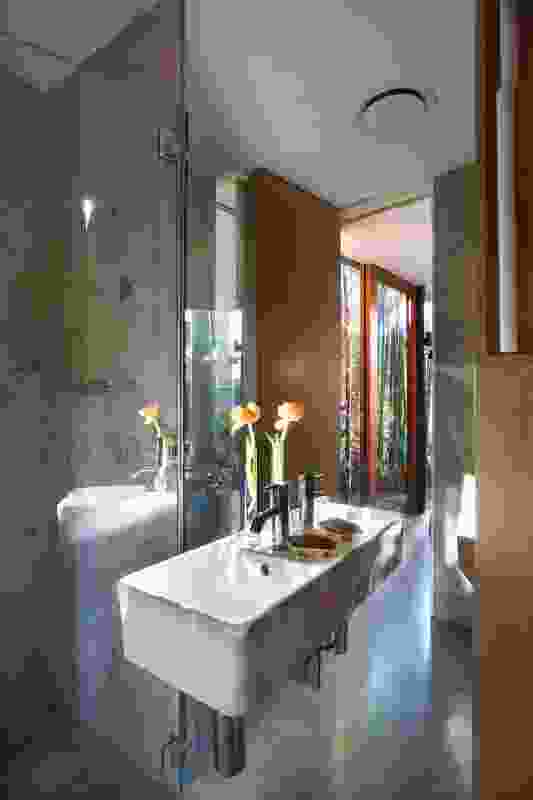 Reflected glimpses of light and vegetation in the downstairs powder room.