The building has a presence on the street and contributes to the community.

Cities evolve, and when a new building arrives to replace an outdated and obsolete one it seems that what had been there is quickly forgotten. Until recently, the length of busy Burwood Road in Melbourne was an anonymous section of high street fronted by a high blank wall and nondescript steel-framed glazing continuing above. With the arrival of Swinburne University’s Advanced Technologies Centre, this inconspicuousness has been replaced with a completely different approach to the street. The new development allows one to see the university at work: the passer-by can look right through the open-glazed lecture theatre and into the courtyard space beyond. The Smart Strong Structures Testing Laboratory, where large 3D static and dynamic testing (or as the engineers like to say, controlled destruction) is carried out can also be seen from the street, and is viewed through a nine-metre high glazed wall. The new street facade creates a major showcase for the highly specialized research that takes place at Swinburne that is usually buried from view.

Using precast panels in construction means that buildings can emerge quickly. The speedy erection of the Advanced Technology Centre made it seem as if a large, dotted container or oversized toy had just been delivered to the campus. The toy was now an unexpected challenge to the street: was there a giant coded message being stamped out in the pattern of circular openings?

Now it is possible to walk through and inhabit the completed development, and to make adjustments to the imagined map of the campus by seeing it framed in circular views from the screen-like panels. At the external walkways, red and cream bricks that have been salvaged from the buildings on the site have been used. They relate to the red and cream buildings that still sit in the centre of the campus and in the residential streets nearby. Unlike in a typical office or university, the foyers, walkways and bridges are not enclosed and are naturally ventilated, giving a sense of open space and free movement, which is appropriate for a place that encourages exploration and innovation. Light comes in playfully and there is a sense of connection with the campus and buildings beyond through the view “portholes.”

In the past the campus has not been guided by a grand master plan, and the buildings are like a crowd waiting between Burwood Road and the railway line to the north. Yet the campus has its character: defiantly un-institutional, an insubordinate mix of eras, shapes and colours, still settling into a pattern that makes sense of the outdoor public spaces. The architects have understood this context well and have exploited it to translate the functions of the building, including highly technical laboratories and specialized research spaces, as well as modular, generic learning spaces, into what they describe as a Japanese-inspired “vertical village.” The concrete facade, brick-lined pathways and escalators that travel though the common spaces all contribute to this village feeling.

By choosing to hold a competition to select the architects, the university signalled from the outset that its intention was to create something beyond a merely functional building, and they have succeeded in this. Working closely with the university, the architects have achieved the first five-star Green Star rating for educational buildings awarded by the Green Building Council of Australia. One of the most interesting green aspects is the facade. What looks like a coded message is generated from a facade modelling system that H2o has developed on previous buildings. The system balances thermal mass with optimum levels of daylight penetration and openable windows. The architects explain how they saw an analogy with skin pores, which are variously coloured, breathe and allow moisture to penetrate, but which are also waterproof and form a raised “scab” for protection. The panels are therefore not just a cost-effective technology, but represent a multifaceted approach to vision, ventilation and servicing and, with their varying densities, to orientation and views.

Precedents were developed by H2o at Deakin University, where the architects used a repeating, circular graphic to create a graded pattern overlaid to Alucobond cladding. They realized that applied to the Swinburne facade, this extended the idea by creating a visually engaging outcome that was simple to construct. In this project they developed a matrix of repeating circular forms (from one metre in diameter to 0.8 metres), something that also caught the imagination of the engineers, who are currently working on non-rectilinear geometries. To achieve all of this there was a need to work closely with the subcontractors. The precast panels were collaboratively designed and developed with the Dandenong-based subcontractor and its staff; they were inspired by Japanese construction technology and the development process included the testing of prototypes. Concerns about weathering were ultimately solved by the quality of the finish. This quality relied on bringing in a separate trade – a master painter, who worked with the precast subcontractor.

Possibly the most difficult challenge with a ten-level building is how to deal with its mass and integration into the neighbourhood. Most techniques involve “breaking down” the facade by articulation and scaling elements, setting back from the street, hiding behind retail and so on. It is important to remember that the driver in this case was the university’s desire to symbolize and communicate its presence and contribution. In conversation with H2o, the University of Melbourne’s Sidney Myer Asia Centre, designed by Fender Katsalidis and which has a strong presence on Swanston Street through its generous setback and expressive facade, came to mind as an excellent precedent; a similar situation with a different building program. At Swinburne there is a new emblem for the university created by a group of connected building forms that do not try to disguise their purpose but which are like a lantern, changing with the sunlight and with the internal lighting reversing the form from day to night. 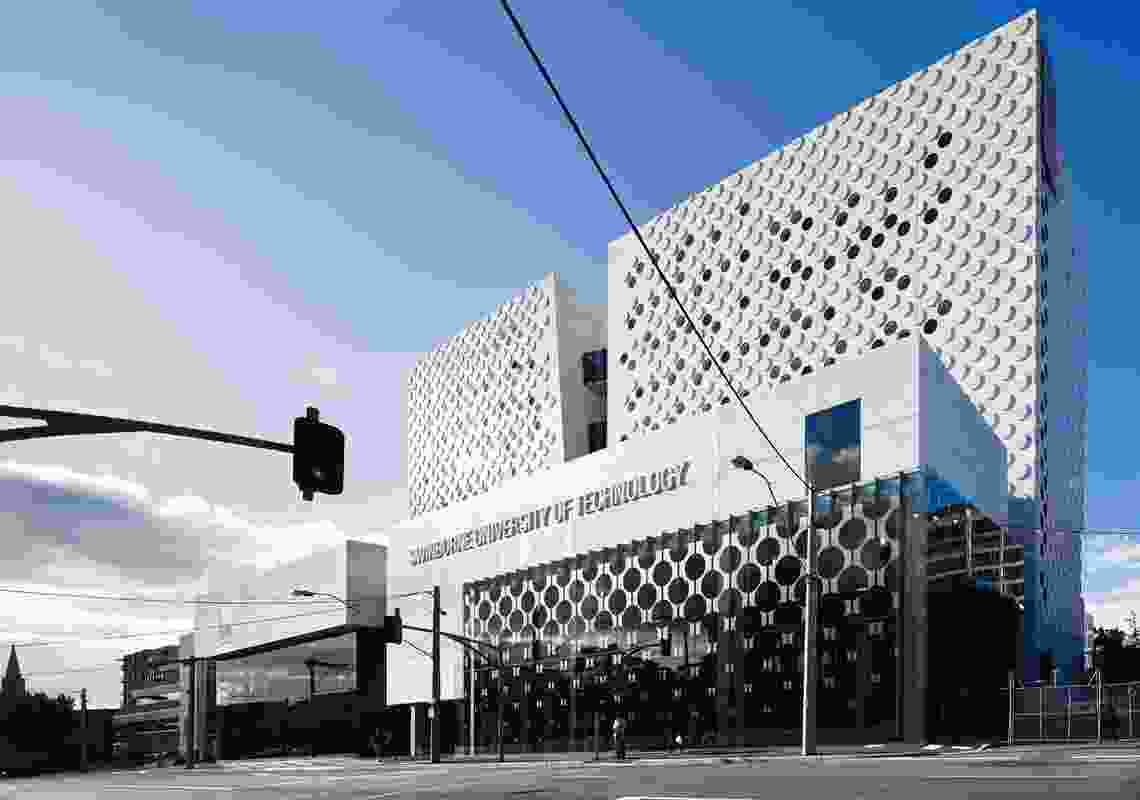 The building has a presence on the street and contributes to the community. 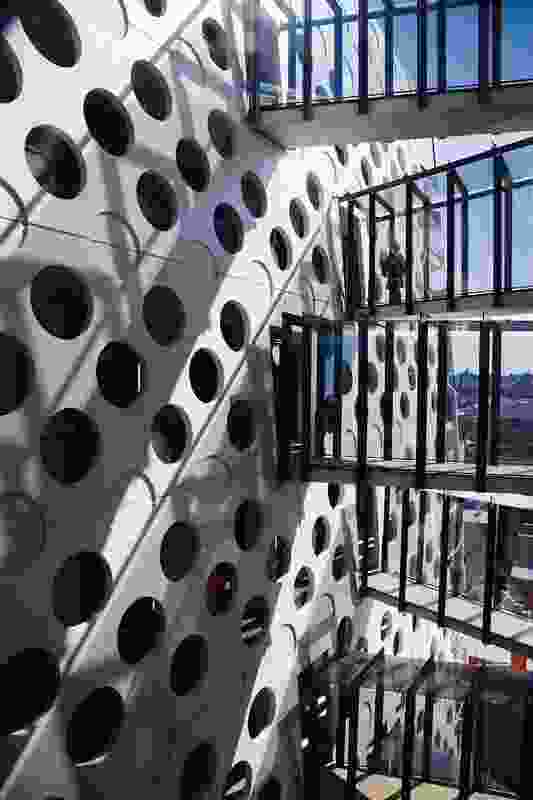 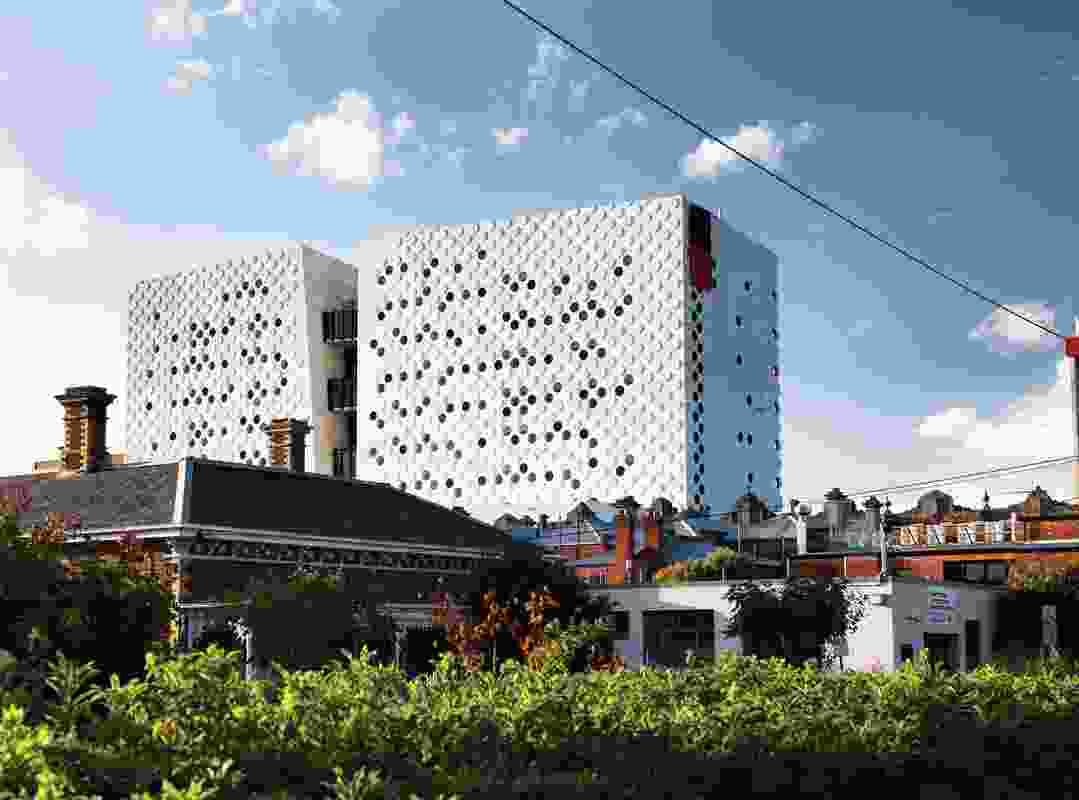 The pattern of circles on the facade strengthens the buildings’ appearance from a distance. 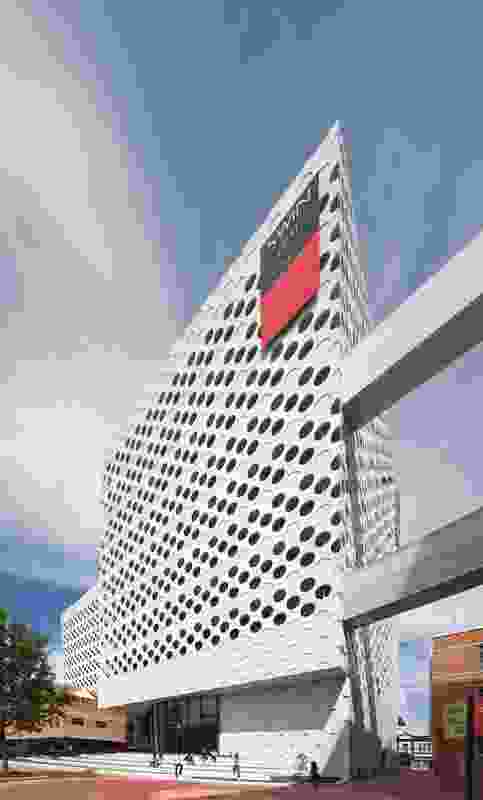 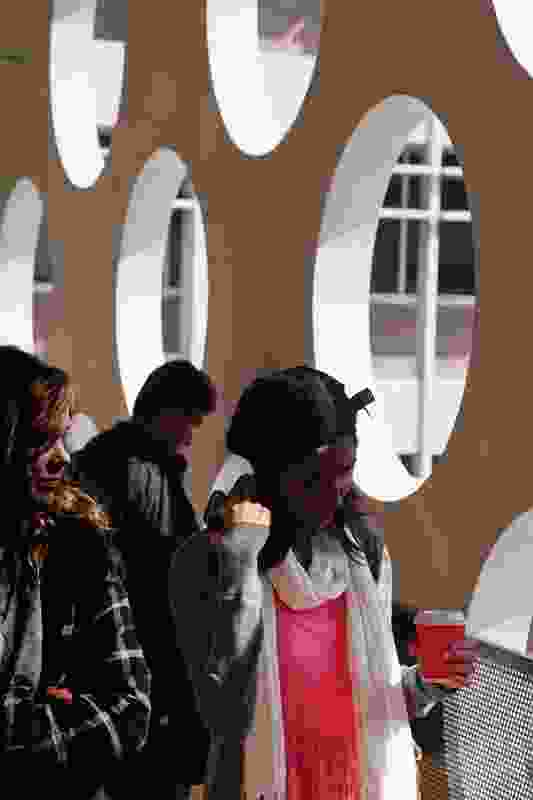 There is a sense of connection with the campus and buildings beyond. 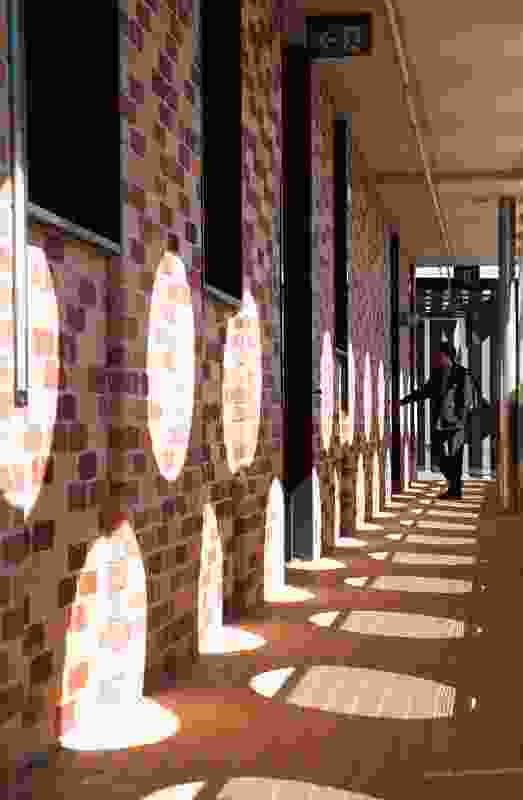 Red and cream bricks used in the external walkways were salvaged from buildings on the site. 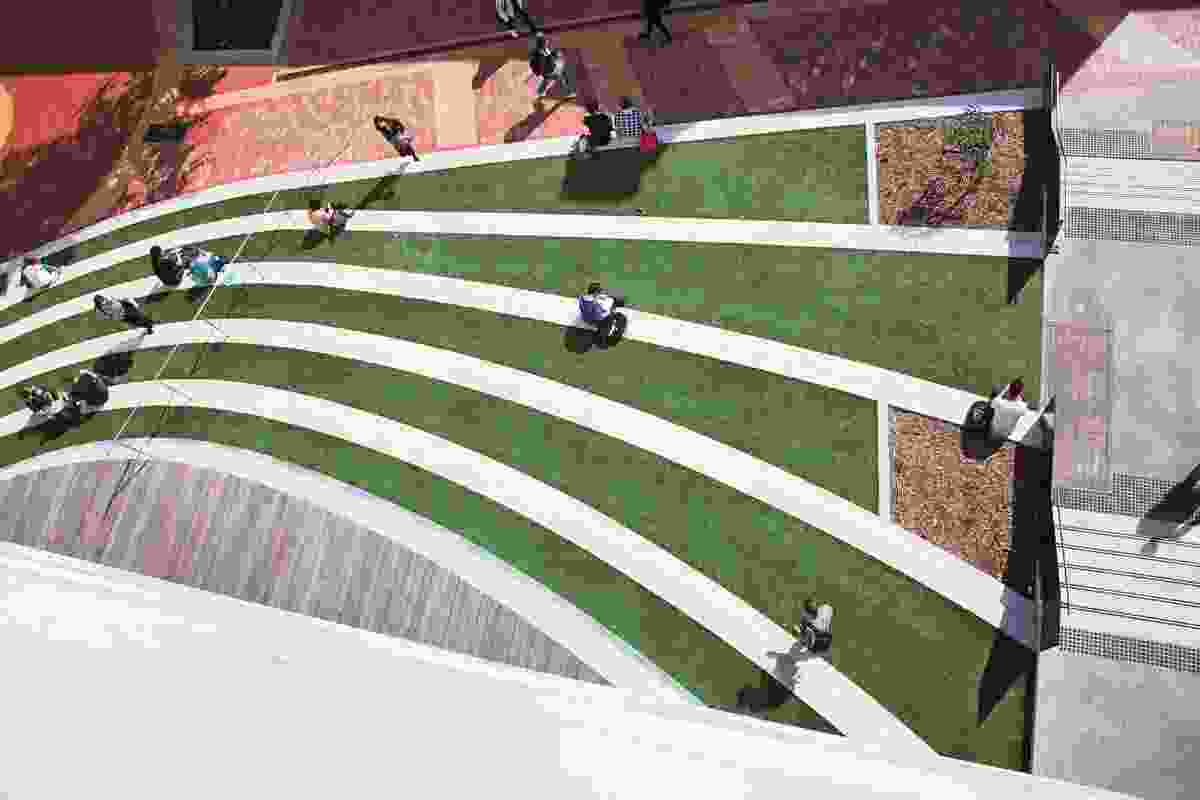 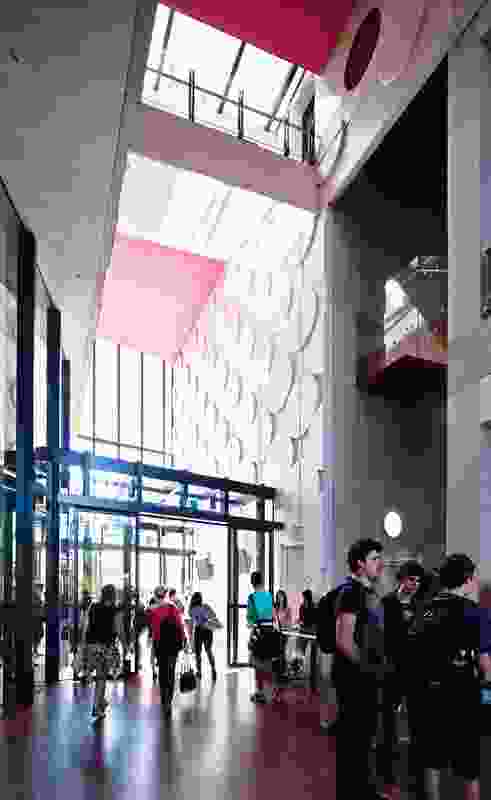 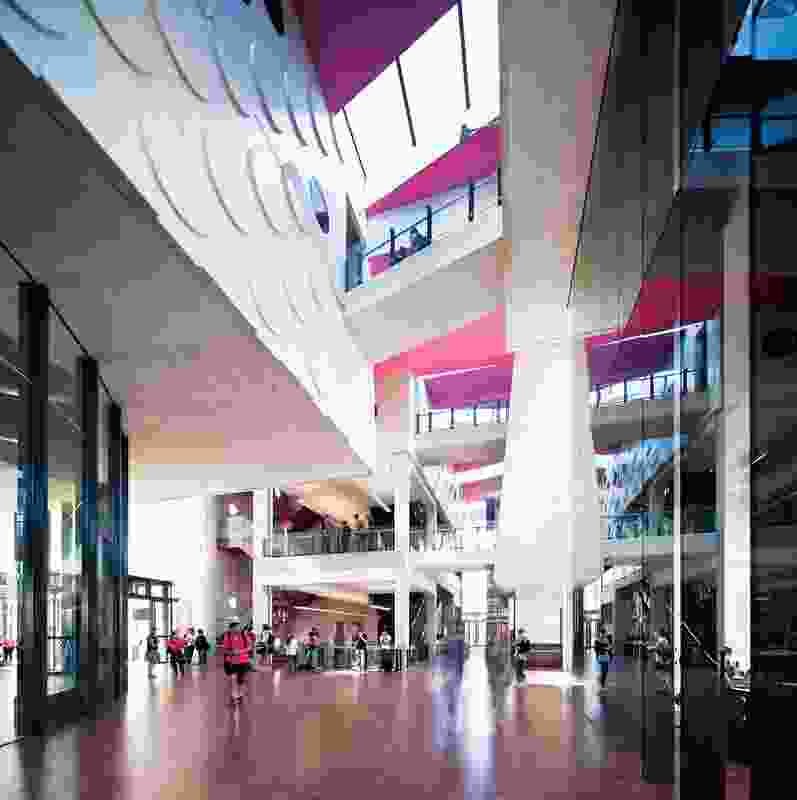 The ten-storey “vertical village” form of the centre is Japanese-inspired.