Sydney by Crown, a twenty-five storey apartment tower in the heart of Sydney’s CBD, hopes to become a new icon for the harbour city. Designed by Koichi Takada Architect, who secured the commission after winning an international design competition, the tower is topped by a distinctive series of parabolic arches and certainly looks unlike anything else seen on the Sydney skyline. With construction set to begin on the development early this year, ArchitectureAU speaks with architect Koichi Takada about the challenges of balancing the demands of inner city residential development with a civic-minded sensibility.

ArchitectureAU: Tell us about the concept for this building.

Koichi Takada: The concept relates to the historical context within the site – we wanted to connect the podium element to the heritage building. We carefully studied its proportions and materiality, which connect to the context and history of Sydney, and then we thought of having something absolutely contrasting – a new structure directly on top of the podium that looks more forward-thinking, more futuristic in architectural appearance. The podium has a heavy masonry character, whereas the tower has a finer, lighter, more high-tech and slim-line materiality – more steel and glass.

Then we looked at the roof feature – the crowning feature. We thought it was a great opportunity to change the skyline of Sydney. Where some other cities in the world have quite prominent skylines, Sydney’s is fairly banal and the experience of it is quite weak. In the design competition, a lot of our competitors designed the building from bottom-up but no one designed it from top down. We consciously designed from both directions.

AAU: The design of the building is deceptively simple. How was this achieved?

KT: Architecture is a very complicated product. It takes a lengthy process to express it, visually speaking, and we wanted to somehow avoid that. We wanted to have something very simple, so that even kids can recognize it. If you ask a child to draw the Opera House, they can draw it without even looking at it. The Harbour Bridge is the same. These are the inherent qualities that we wanted to express in the external feature – something that you can visually explain in fairly simple terms, that was the ambition.

AAU: How does it enhance the streetscape and contribute to the public realm of Sydney’s CBD?

KT: We wanted to create architecture that is engaging, not look away from the public, which a lot of residential buildings in Sydney do. At the podium levels where the public experiences the building, there will be a laneway cutting through the site with an atrium as you walk through it and the glass lift coming up to the tower. So the experience within this building is varied.

AAU: How does it develop the typology of urban multi-residential housing?

KT: We are interested in improving the way we live in a city. In the urban context, with living in Sydney brought into the CBD areas, the doughnut-shaped hollow void (of Sydney CBD) will now start to fill in with a lot of activity so that Sydney will become like any other cosmopolitan city.

Apartment living in the city is driven by the commercial pressures, which affect the design. So the natural evolution is to make apartments affordable by making them smaller. This really frustrates me. To negate this we proposed a lot of common areas – such as pool areas or lounges, a music room, library and gym –as an extension of the residential amenities. They are also very important parts of creating a sense of community and a sense of everyone coming together.

We sacrificed about ten percent of the gross saleable area to these spaces. They don’t necessarily earn money for the client but these are the sorts of areas that create meaning for the people experiencing the building. I think it is necessary to make the building turn into architecture and it makes the architecture richer as a whole. 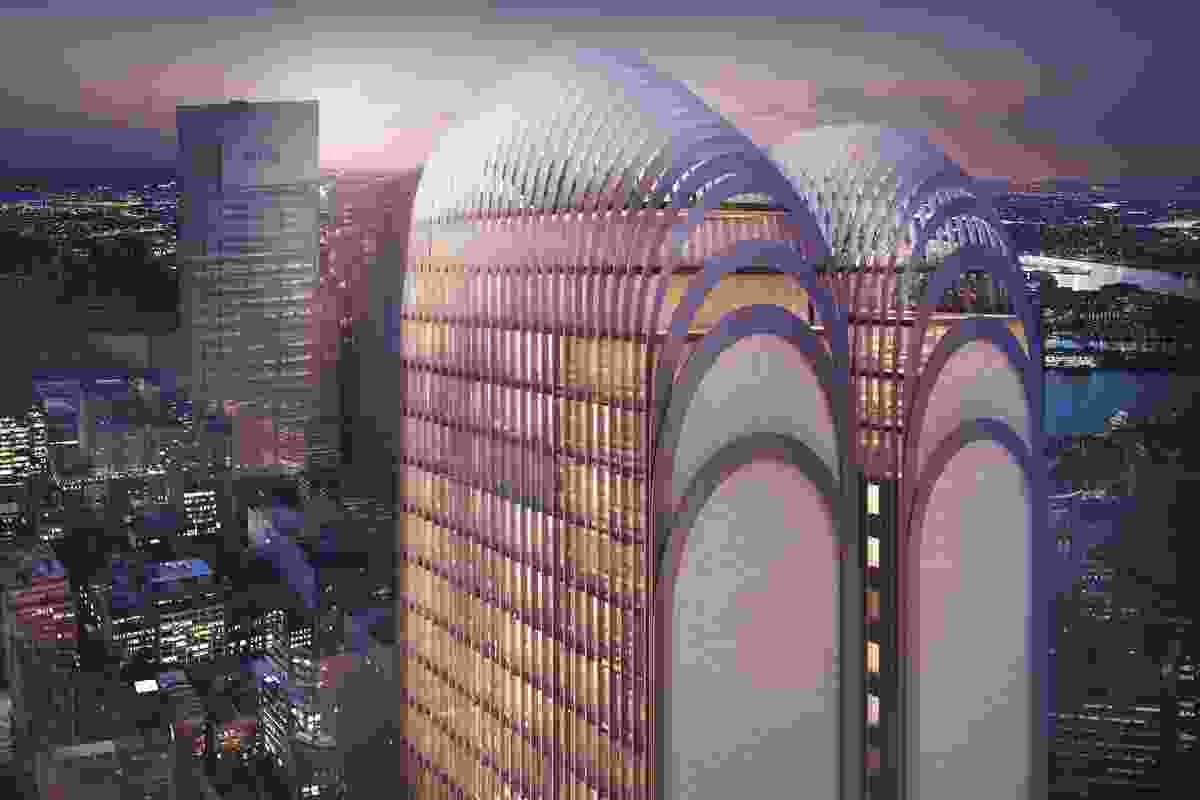 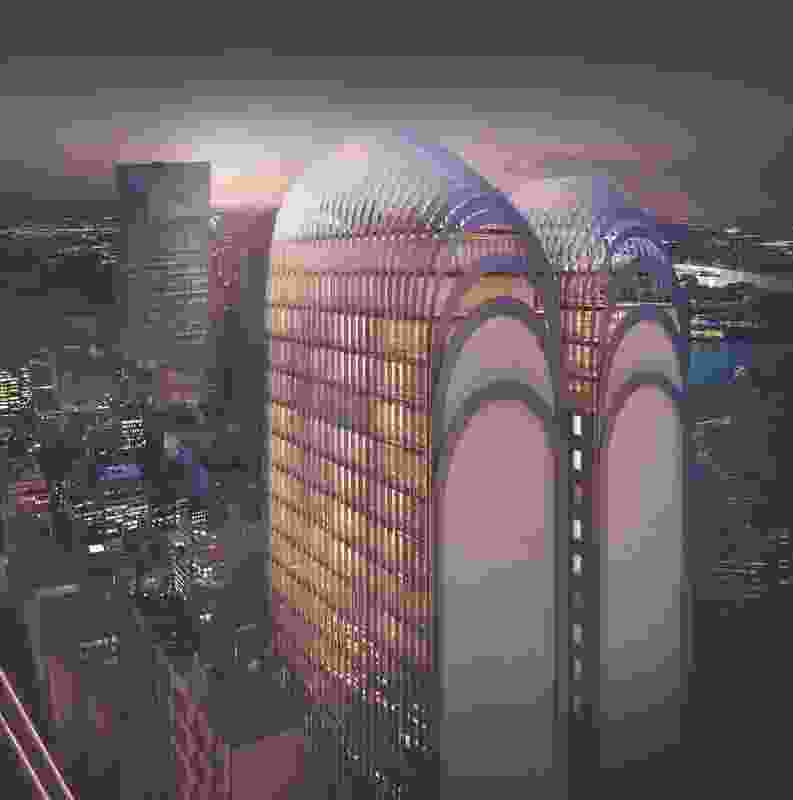 The roof features a series of parabolic arches. 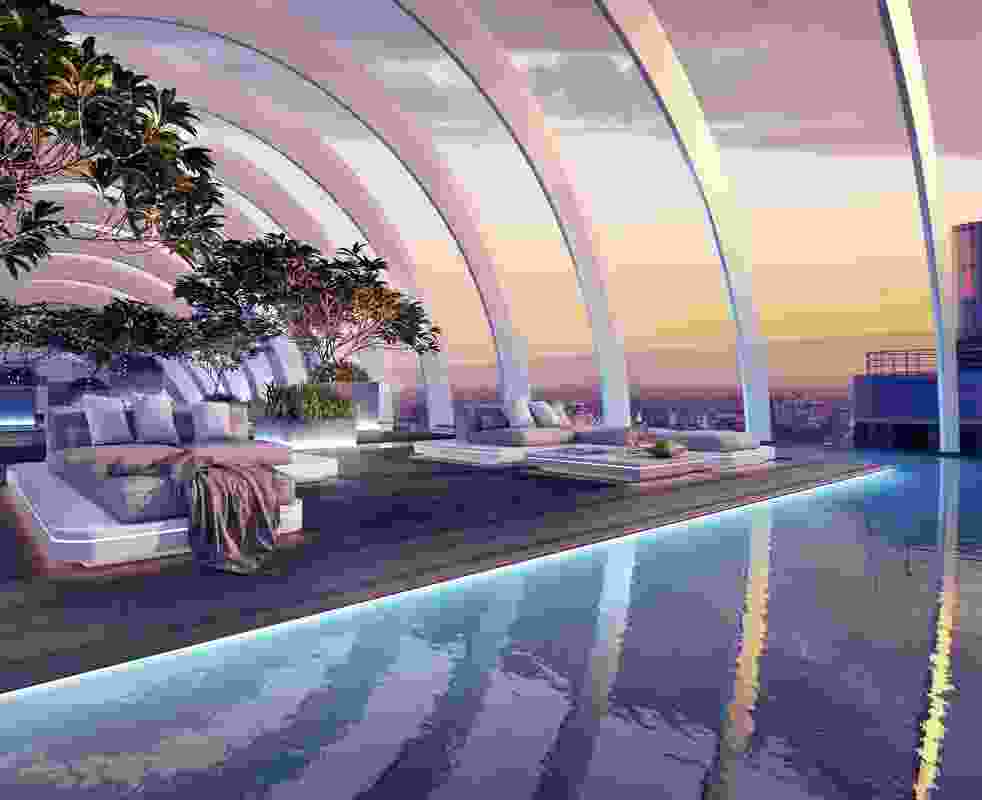 The rooftop pool and garden. 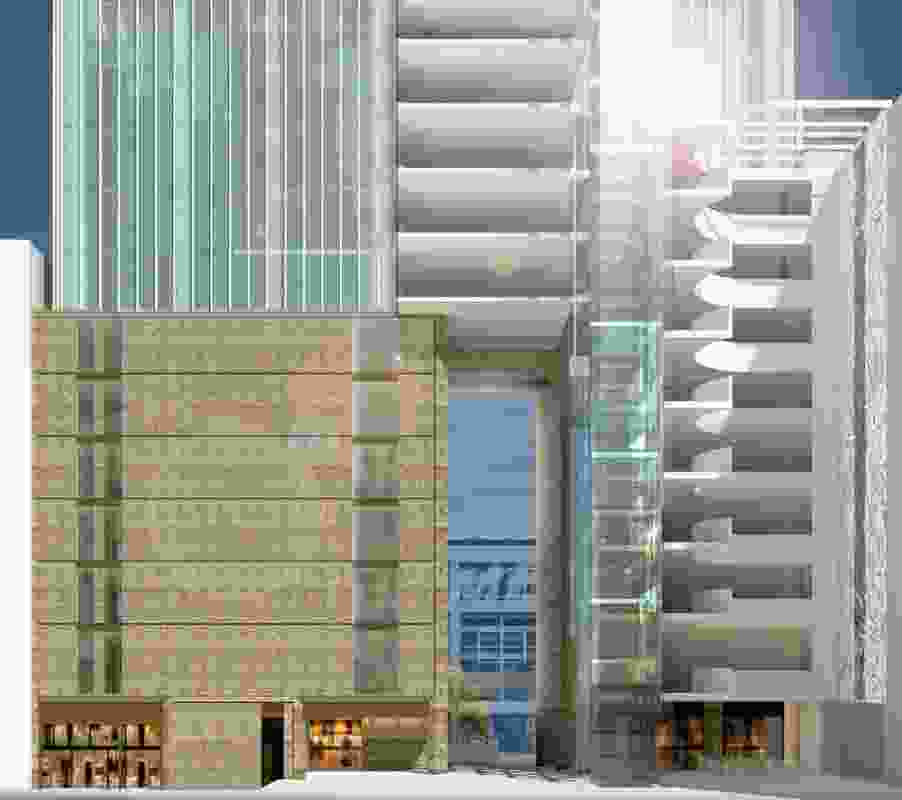 An eight storey laneway cuts through the site between Clarence and Kent streets. 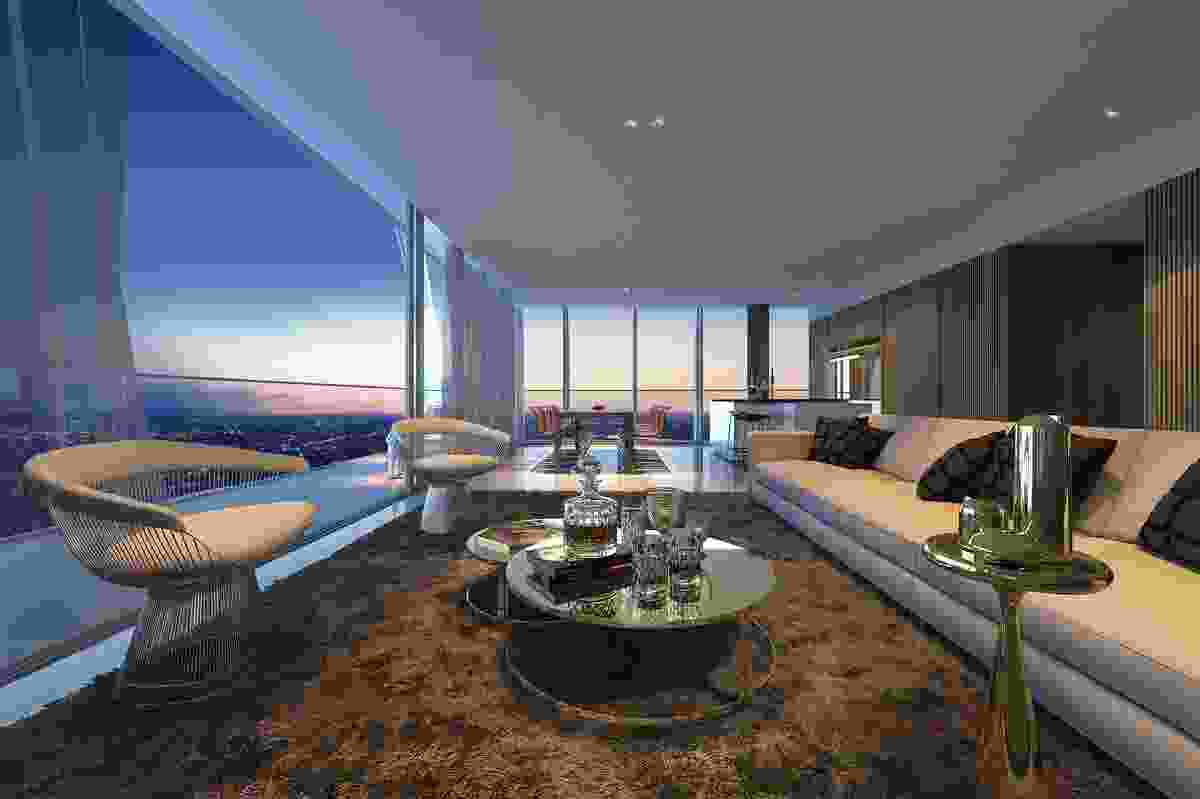 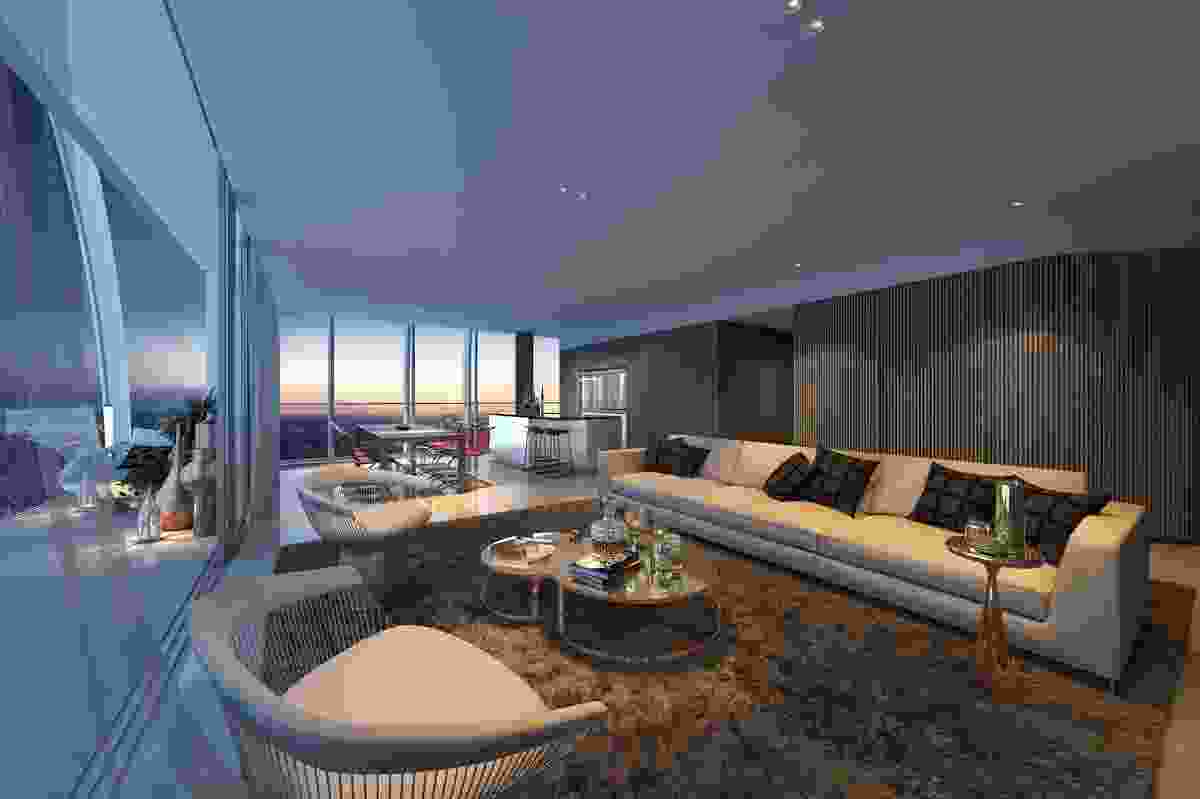 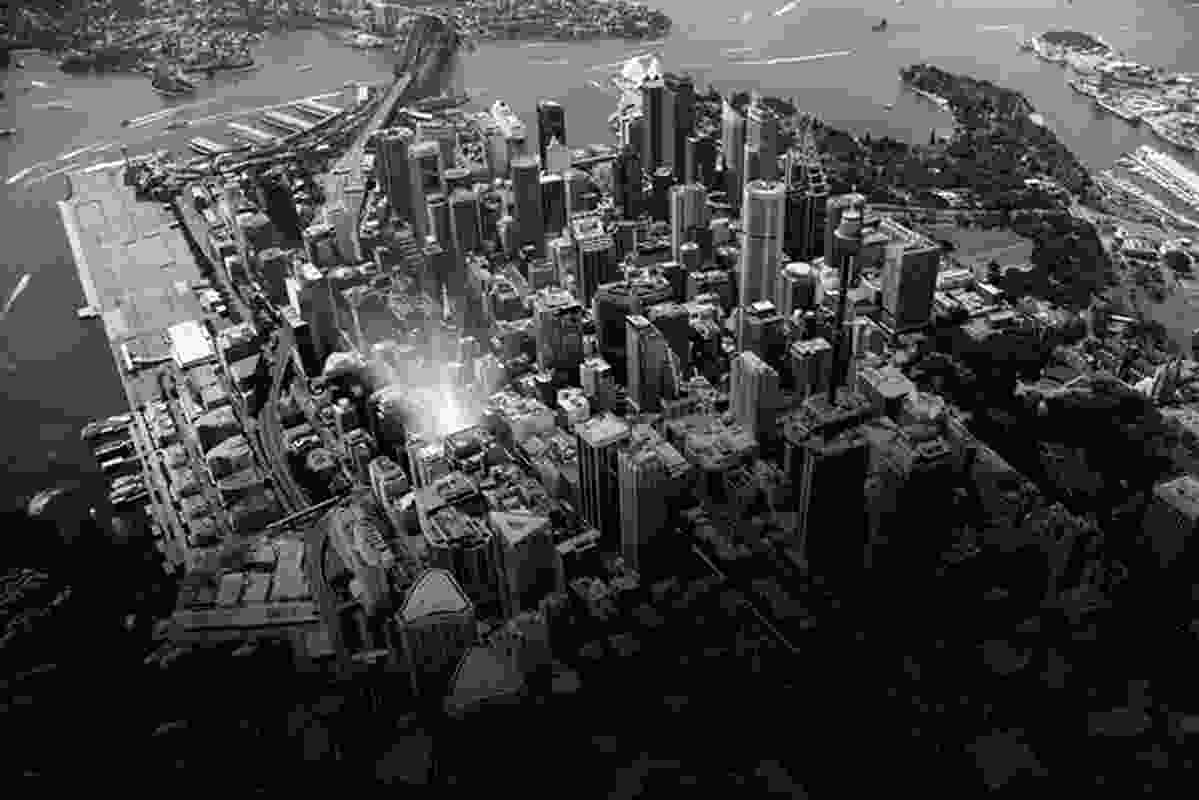 Sydney by Crown is located in the heart of the CBD.