Stanic Harding’s small insertion at Sydney Park makes a significant contribution to the amenity of the area.

Overview of the kiosk and toilet pavilions, each sheltering under a folded ply roof responding to the rolling hill landscape by JMD Design.

Years before I had children, a friend who had just started out observed that when you have kids you suddenly become part of a club you previously had no idea existed, like it or not. As well as suddenly considering poo a perfectly normal topic for polite conversation, the way you map a city takes on a whole extra layer – you know where all the lifts are, where the cleaner change facilities are, how to find a playground you can stand hanging around in, and which cafes can provide a decent coffee in environs that don’t pose a major threat to the kids, your sanity, or the wellbeing of other patrons. Sydney Park now has it all – a really great playground, an engaging park, salubrious, clean toilets close at hand and a kiosk with an espresso machine and view of said park, allowing adults to caffeinate while the little dears let off steam running up and down the artfully disposed hillocks. All beautifully designed and built. Visiting the project with architect Andrew Stanic, I tried hard to look at the project through the eyes of the architectural critic, but I kept finding myself slipping into being an envious parent. If only my local council provided a facility like this! Maybe we should move to Sydney … Looking at the photographs as I write, the feeling returns. The images show how polished the architecture and landscape architecture is, and how tight is the relationship between the two. What the professional photos don’t entirely capture is how comfortable it is to be here. How lively and relaxing the space between the kiosk and the toilets becomes as coloured plastic chairs informally occupy part of it, and as people and dogs come and go. (I expect dogwalkers are as delighted by the new facilities as parents.) So pleasant is the memory, that it would be easy to overlook the highly accomplished design that generates this sense of ease. For, despite having all the right programmatic ingredients, this could easily have been yet another mediocre municipal facility, one parents like me go to grudgingly rather than with a lively sense of pleasure.

The project is clear in both its plan organization and form. The JMD Design landscape skilfully contains the inventive playground. The kiosk and toilets are close by, but also maintain their own space, looking out onto rolling, miniature storybook hills that lie adjacent to both. This means that, although highly accessible and open, the playground does not dominate this end of Sydney Park. Families can picnic in the Stanic Harding-designed shelter within the play area, but other park users can cycle, walk dogs, jog, stroll, read or rest without being directly confronted by hoards of whooping children. Likewise, the kiosk does not take over the public space. The careful design of the area between the rectangular kiosk and the circular toilets, including non-cafe places to sit, and the disposition of the canopies above, means one can linger without feeling obliged to spend money. (That said, the kiosk clearly has its market sorted out. In addition to offering “gourmet lunch cuisine”, it supplies picnic rugs, sunscreen and umbrellas, and sells sunhats, frisbees and other toys for dogs and kids, and hoola hoop lessons.)

The design of the facilities makes a significant contribution to the amenity of the park. This is a serious work that, nevertheless, does not take itself too seriously. It has a lightness and humour that befits a sunny day in the park – the kink in one of each of the paired downpipes suggesting a certain flirtatious whimsy. The roof planes hovering over the black box kiosk and white cylinder toilets respond to the landscape, mirroring and reinterpreting the rolling typography in the undulating timber surfaces. The buildings themselves are simple, smart and robust, and seem to be coping well with use. The crisply detailed kiosk, clad in rigidized steel, shuts down completely at night – during the day the shutters are counterbalanced, avoiding props on which patrons might bang heads. The toilets are overtly “clean”, both functionally and aesthetically, but with a measure of delight. Open at the top, the yellow tiled interiors are unexpectedly striking. Slot windows take advantage of the wall thicknesses generated by inserting a square space into a cylindrical envelope, providing views out while maintaining privacy for those within. Public toilets are both fascinating and mundane – as the public location of very private bodily activities, they at once simple and ambigious spaces. These tall white cylinders negotiate this complexity well.

It is important to have works of this quality made available to a general public. To date, much of Stanic Harding’s work has been in the private world of the family house, so it is particularly pleasing to come across this project which has the potential to play a part in the lives of so many, even if only in passing. This is one of a number of public projects completed by the City of Sydney over the last few years, which have brought excellent architecture and landscape architecture into the everyday environments of its residents. The city should be commended for this endeavour.

The playground at Sydney Park is reviewed in Landscape Architecture Australia 125, February 2010. 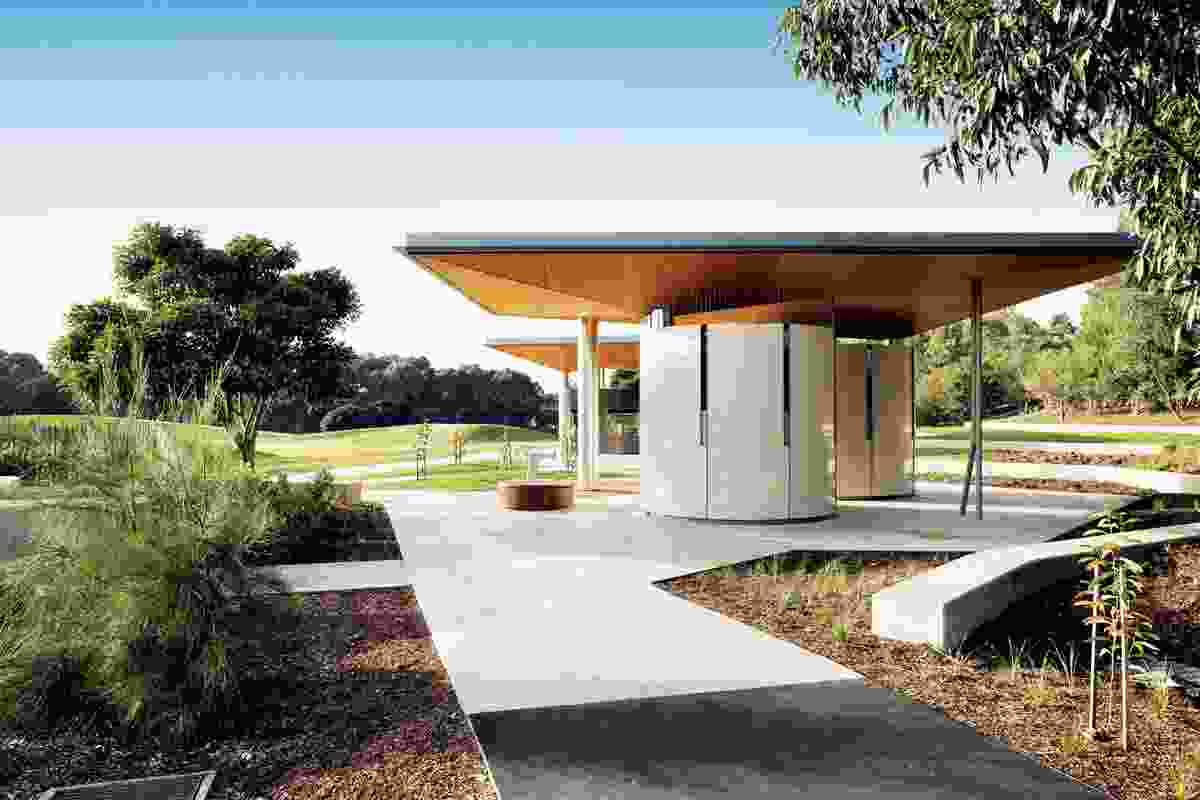 Overview of the kiosk and toilet pavilions, each sheltering under a folded ply roof responding to the rolling hill landscape by JMD Design. 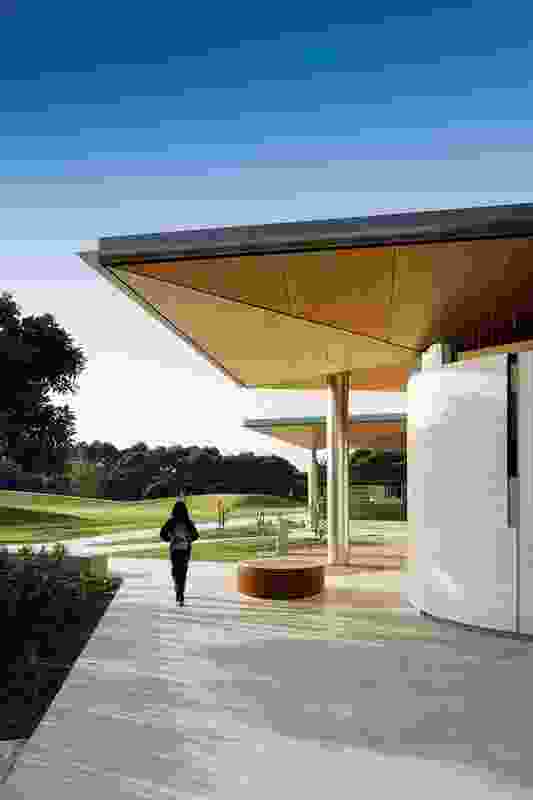 The approach to the new Sydney Park Amenities by Stanic Harding. 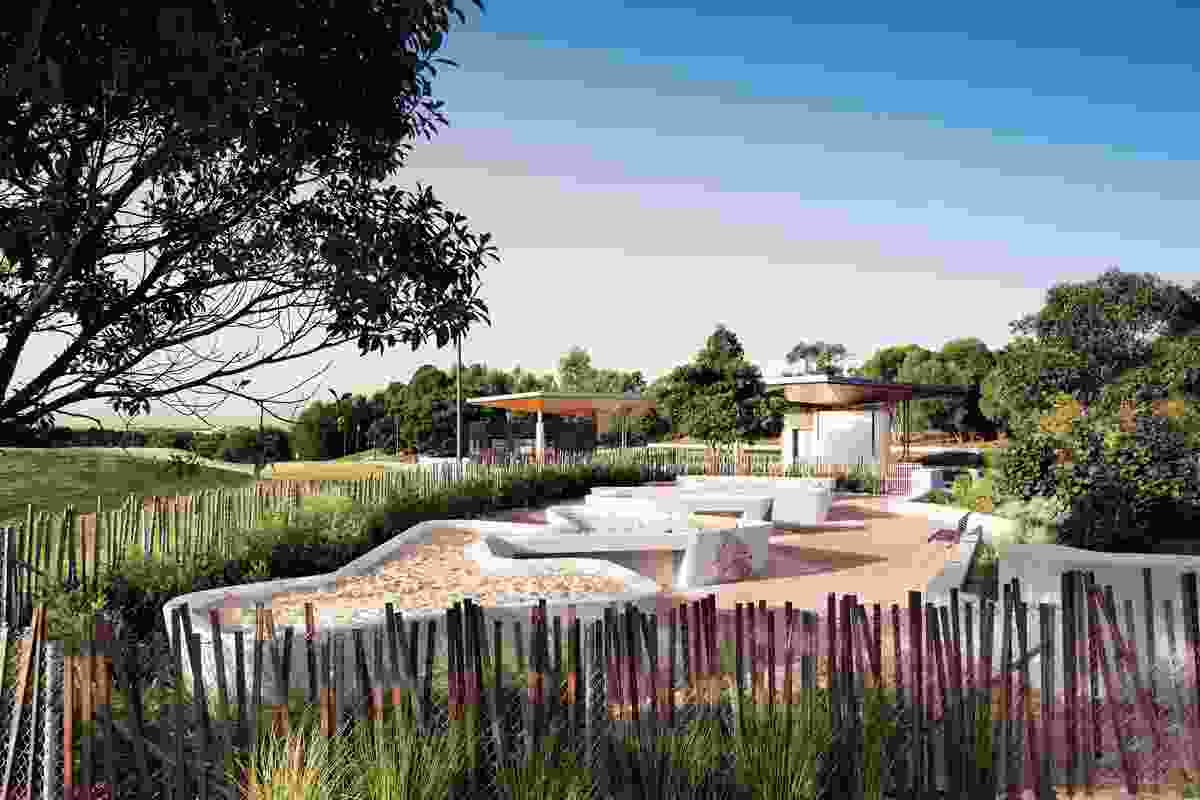 The pavilions seen across the playground’s sand tables, which are accessible for children in wheelchairs. 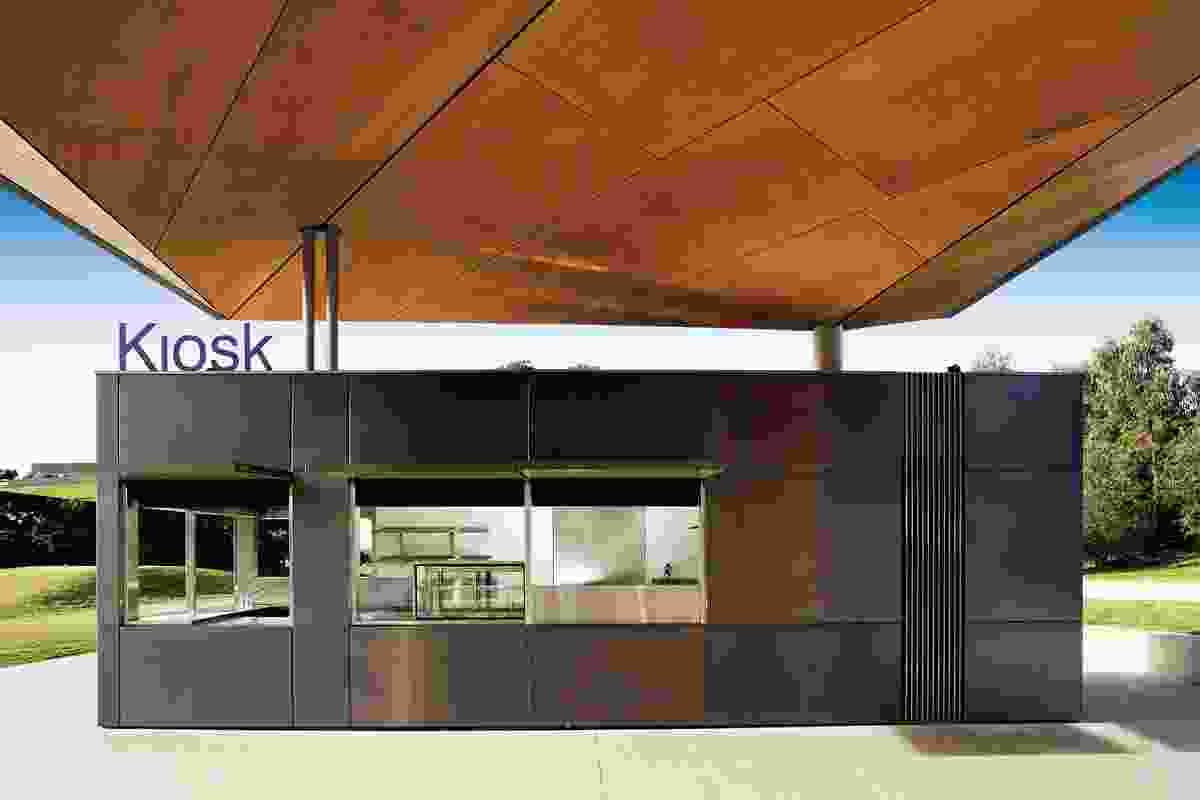 The crisply detailed kiosk, clad in rigidized steel, shuts down completely when closed. 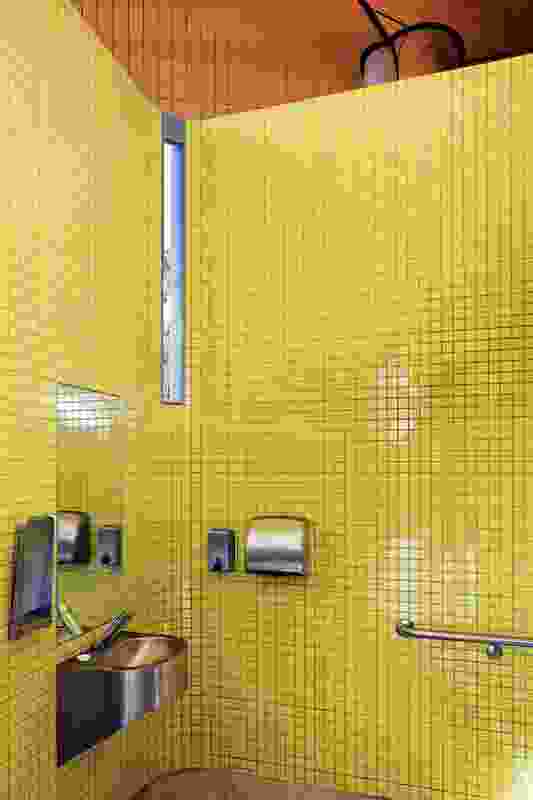 The tiled toilet interior with slot windows allowing light and glimpses out to the landscape. 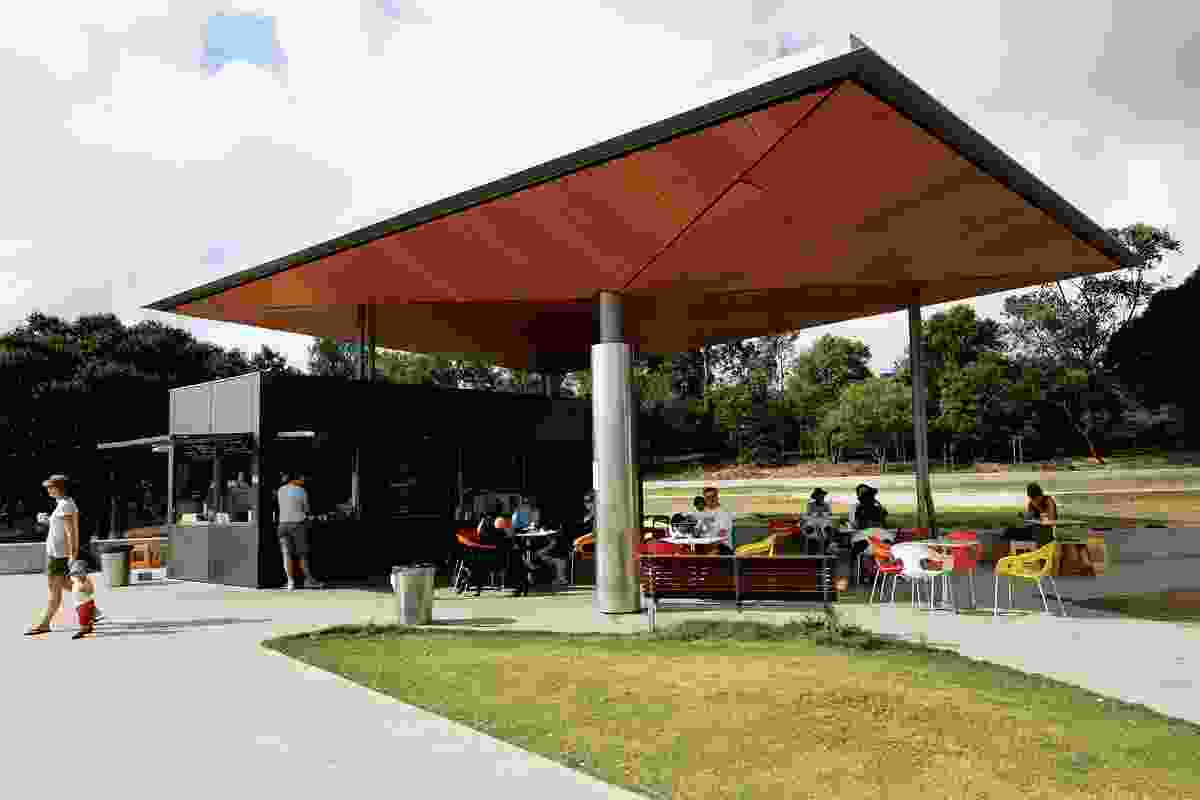 The kiosk in use. 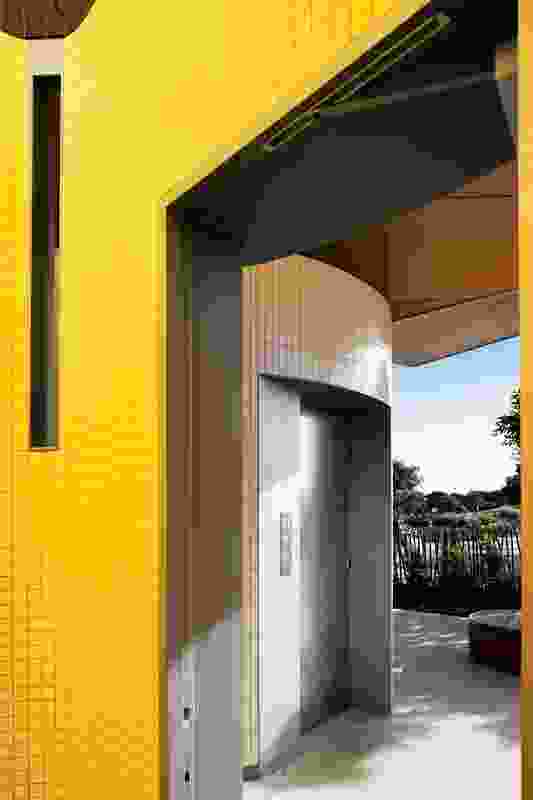 Looking out from the toilet to the playground beyond.