The International Highrise Award (IHA), the City of Frankfurt’s bi-annual prize for ‘model’ skyscraper designs, has announced five finalists for this year’s €50,000 prize, including Sydney’s One Central Park by Ateliers Jean Nouvel.

As jury chairman Christoph Ingenhoven said of the finalists, “Good architecture requires a willingness to take risks and a desire to try things out. All the finalists took this approach – there can be no innovation without experimentation. Our shortlist comprises three different prototypes of the future.”

The International Highrise Award is aimed at architects and developers whose buildings are at least 100 metres high and have been completed in the past two years. It judges the nominated projects according to future-oriented design, functionality, innovative building technology, integration into urban development schemes, sustainability, and cost-effectiveness.

Previous winners of have included 1 Bligh Street, Sydney by Ingenhoven Architects and Architectus (2012) and The Met, Bangkok by WOHA Architects (2010), among other benchmark towers.

This year’s five finalists were selected from 26 nominees from 17 countries. Read on to hear the IHA’s comments on each finalist…

“The successful combination of innovation, sustainability and cost-effectiveness catapulted One Central Park (Sydney, Australia) into the finalist shortlist. This project, consisting of two towers, is based on a trapezoidal layout. 116 meters and 65 meters tall, its two building elements stand on a common base and have a gap between them. The latter is largely in the shade and can be naturally lit by means of sophisticated daylight technology. Moreover, the entire building has been greened.”

(Click here to read our review of One Central Park)

“These ‘forested highrises’ are an impressive example of a symbiosis between architecture and nature. The greened residential highrises are based on simple rectangular layouts and, with 18 or 24 stories (78 meters and 121.5 meters), of varying heights. Every one of the 400 apartments has access to at least one patio or balcony, which amounts to the residents’ own garden or a little piece of forest – because there are several hundred trees growing close to the façades, mixed in with thousands of shrubs, bushes and ground-cover plants.”

“De Rotterdam takes its orientation from the idea of a ‘vertical city’ whose manifold functions appear to be visibly stacked. This 151.3-meter highrise complex consisting of three towers on the Wilhelminapier, Rotterdam’s former port, rises up like a massif. The building’s multi-functionality, its highly compact use of space and its ‘unsettling beauty’ impressed the jury; ‘a brave, experimental edifice.’

“Two ‘highrise disks’ standing parallel to each other are the outstanding feature of the 105-meter-tall Renaissance Barcelona Fira Hotel. This type of construction also has a gap between its elements, elaborately greened and allowing for the passage of air, something which delighted the jury. The façades are structured not by means of conventional rows of windows, but by an irregular pattern of openings, reminiscent of palm-tree leaves. The shapes of these openings are repeated on the adjacent concrete surfaces, casting shadows over the hotel rooms which change according to the angle of the light at the time.

“As the experts see it, Sliced Porosity Block sets new social, cultural and urban-planning standards. At the heart of the office and residential complex that is Raffles City, Chengdu, is a large square, which is transformed into a particularly spectacular experience for the surrounding district during evening hours with its illumination effects on the building façades. Here the public space, which is so often neglected in building developments in China, has also been taken into account, with sensitivity shown to the local culture.” 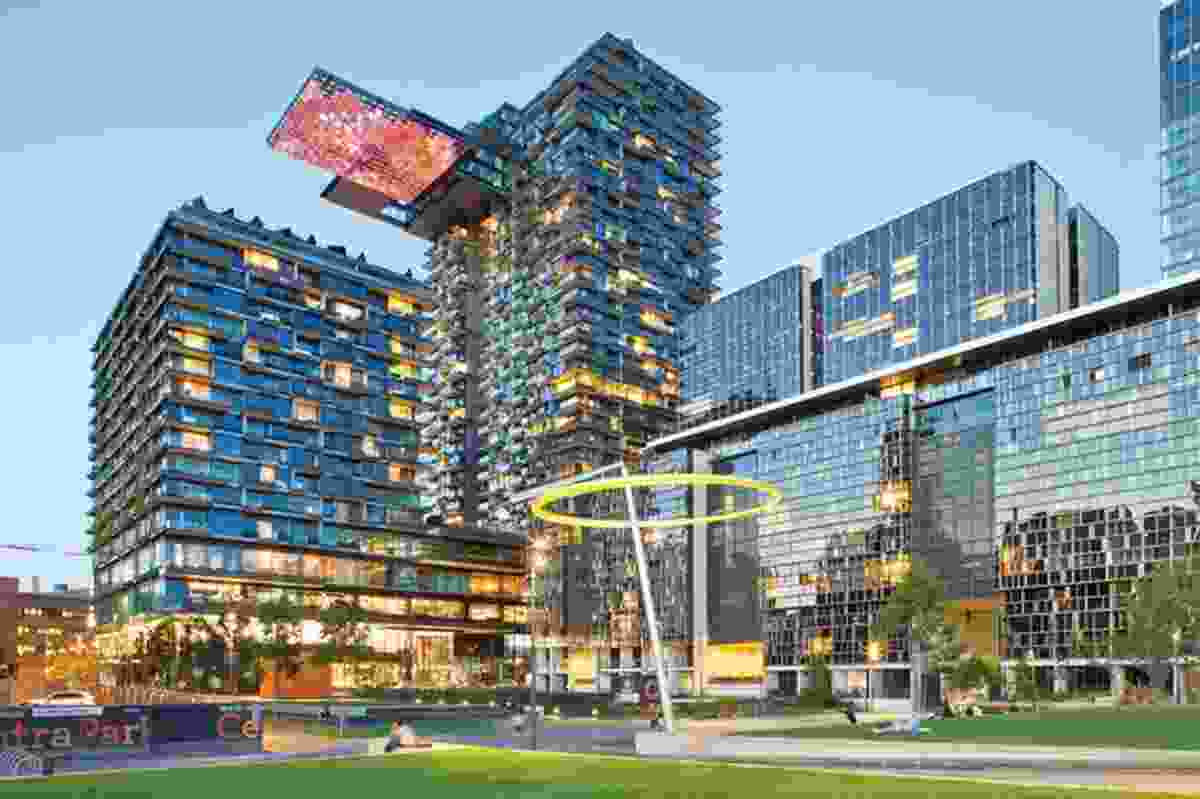