Brightly lit both inside and out, Bates Smart’s National Centre for Synchrotron Science in Melbourne creates the conditions in which to see.

The National Centre for Synchrotron Science (NCSS) by Bates Smart, in the outer-Melbourne suburb of Clayton, is a new building representing the public face of the Australian Synchrotron – an advanced third-generation 3GeV light source with a high-quality, low-emittance, stable electron beam. The synchrotron is a machine that accelerates charged electrons to create an electron beam that travels at close to the speed of light. Travelling in orbit the electrons release intense radiation – synchrotron light – which can be filtered and directed down “beamlines” for non-destructive, high-resolution, rapid, in situ, real-time imaging and analysis techniques. It creates the conditions in which to see.

Kristen Whittle of Bates Smart says, “NCSS has been designed to offer the visitor a series of new and exciting experiences of light.” Here, we might recall Le Corbusier’s foundational passage in Towards a New Architecture (1923):

“Architecture is the masterly, correct and magnificent play of masses brought together in light. Our eyes are made to see forms in light; light and shade reveal these forms; cubes, cones, spheres, cylinders or pyramids are the great primary forms which light reveals to advantage; the image of these is distinct and tangible within us without ambiguity. It is for this reason that these are beautiful forms, the most beautiful forms. Everybody is agreed to that, the child, the savage and the metaphysician.”

But what has the light revealed – beauty or savagery?

The NCSS is a glowing building: square in plan, it forms a pigeon pair with the circular synchrotron. The polycarbonate facade has been hand painted with a dichroic finish, giving it a pearlescent sheen that shifts with changing light conditions. The interior is tall and monochromatic; within is a shimmering cella clad in acrylic sheets that receive and refract daylight from a hidden source above.

It is one in a string of glowing pearls that continue to appear in the design pages all over the world, each as beguiling, translucent and blank as the next. Whittle says, “The absolute mantra of the project is to create meaning through reduction – paring back the detailing and the finishes – so that the sole experience for the visitor … is the quality of the light, nothing else.”

There is more here, another story. What is the source of this architectural glow and what meaning might it create? This story is barely a silhouette on the polycarbonate scrim.

The archetypal glowing box is the New Jerusalem depicted by John the Apostle (or maybe John of Patmos) in The Book of Revelation. The New Jerusalem is a vision at the heart of Christian eschatology, the philosophy and theology that is concerned with the final events of history – the end of the world. The New Jerusalem is shown to John as a glowing golden cube; “the Holy City, Jerusalem, coming down out of heaven from God. It shone with the glory of God, and its brilliance was like that of a very precious jewel, like jasper, clear as crystal” (Revelation 21:10–11); “The City was laid out like a square, as long as it was wide” (Revelation 21:16); “The wall was made of jasper, and the city of pure gold, as pure as glass” (Revelation 21:16).

This is the city at the end of time, a vision of a city where “there will be no more death or mourning or crying or pain, for the old order of things has passed away” (Revelation 21:4).

That revelation is a vision of the end times, not of scientific infrastructure. John’s vision of the crystal city is recalled time and again in Western architecture, from the Gothic cathedrals to the modern day. The Australian Synchrotron, too, seeks an enlightenment utopia; it is seeking cures, the “synchrotron light of high brilliance, ranging from infrared to hard X-rays is supplied at the end-stations of beamlines enabling advances in treatments for diseases such as cancer and Alzheimer’s.”

Bates Smart isn’t shy about its goal of manifesting in architecture the hopes of synchrotron science. “We wanted to match the revolutionary calibre of scientific research that’s being done at the Australian Synchrotron with a building that, through its materiality and poise, would make light and the work of the research manifest in the material fabric of the building,” says Kristen Whittle. The NCSS reflects and refracts the eschatological dreams of a new earth without illness, free from dementia.

But the world is not like that, is it? The world is savagery and beauty in equal measure. What is it that this beautiful light reveals? Wherefore the glow box?

The oft-deployed pearlescent glow of the NCSS should not be mistaken for a mere quality. Architecture is not a science and it is not a problem for science – it is a problem for philosophy, for art, for politics and for building. The glowing box, like so much in architecture, is at once ancient and contemporary, sacred and profane, and both ephemeral and violent. The relationship between science and modernity swings from utopian to cynical and back again. The nineteenth-century hope for a mechanical paradise turned to despair after the Great War; the birth of the internet age has brought revolution and paranoia. Architecture can contain this gyre of meaning. It can create the conditions in which to see.

At the dawn of the modern era Francisco Goya painted the midnight execution of resistors to the Napoleonic army. The picture is The Third of May 1808 (1814), a night beyond redemption. Between the victims and the mechanical firing squad is a lantern, a glowing cube: it is impossibly bright and at once reveals and is witness to the pitiless brutal violence. It is an image of singular tragedy but also of modernity gone awry before it has even begun. The lantern is pure surface but it irradiates the scene. The light, here, is not the subject or object, it is the means. It creates the conditions in which to see.

In 1971 Stanley Kubrick’s film A Clockwork Orange irradiates the image again. In the opening scenes the blue-black silhouettes of Alex and his droogs applaud the slumped but songful wino before administering “a bit of the old ultraviolence.” The viciously backlit scene reveals no form, only shape and shadow; there is no “magnificent play of masses brought together in light”; rather, this light creates the conditions in which to see. Each picture creates the urge to look away.

The beneficent bloom of the NCSS may appear to be a far cry from Kubrick’s unflinching portrayal of human psychopathy, but the historical foundations for this building are ankle deep in blood. Architecture is a typological art form and the NCSS is a temple. When the Greeks and Romans looked at temples they saw blood. The NCSS doesn’t have columns, frieze or pediment, and there are no bone-shaped triglyphs, but it’s a temple nonetheless.

In classical temples the columns formed a kind of screen between the common man and the cella, God’s dwelling place within, dividing the sacred from the profane. The NCSS has replaced columns with a double layer of concrete wall and polycarbonate screen. The layers have been lit and apertures have been cut in the concrete wall to create the impression of the cella or another kind of space within the glowing external skin. The “windows” cut in the inner concrete layer of the facade give the impression of rooms and spaces, of levels to which the windows correspond, creating an incidental relationship with the facade. This is true of the office spaces on the first floor but the “windows” are otherwise arbitrary, an impression or shadow rather than a reality.

Inside we find a peripteral plan, very much like a Greek or Roman temple. In the centre of the main space we find the cella at the heart of a building. It also glows, but this time, with daylight pushed into the space by skylights fitted with a magnifying sheet of lenses, a rainbow sheen refracts across the acrylic panels that make up the surface. We might be reminded of Bruno Taut’s exquisite Glass Pavilion for the Werkbund Exhibition of 1914. Paul Scheerbart’s inscription on the pavilion read: “The joy of colour/Is only in glass-culture. /Larger than a diamond /Is the glass-house’s double wall.”

The cella in the NCSS is not the house of God, but a lecture theatre, no longer the sacrosanct domain of a select few but now the future forum for countless lectures, debates and discoveries. In the grey felt dampened room the ceiling lights hover like halos waiting for the elect and the curious, a fitting appropriation for contemporary architecture.

We began at the end of times but now we turn to the beginning; in the blinding moment of creation: the earth was without form, and void; and darkness was upon the face of the deep. And the wind moved upon the face of the waters. And God said, Let there be light: and there was light. (Genesis 1:1–3)

Chaos and void are divided from light; in the beginning God did not create form but the conditions in which to see.

Mark Raggatt is an architect. He has a Vitamin D deficiency. 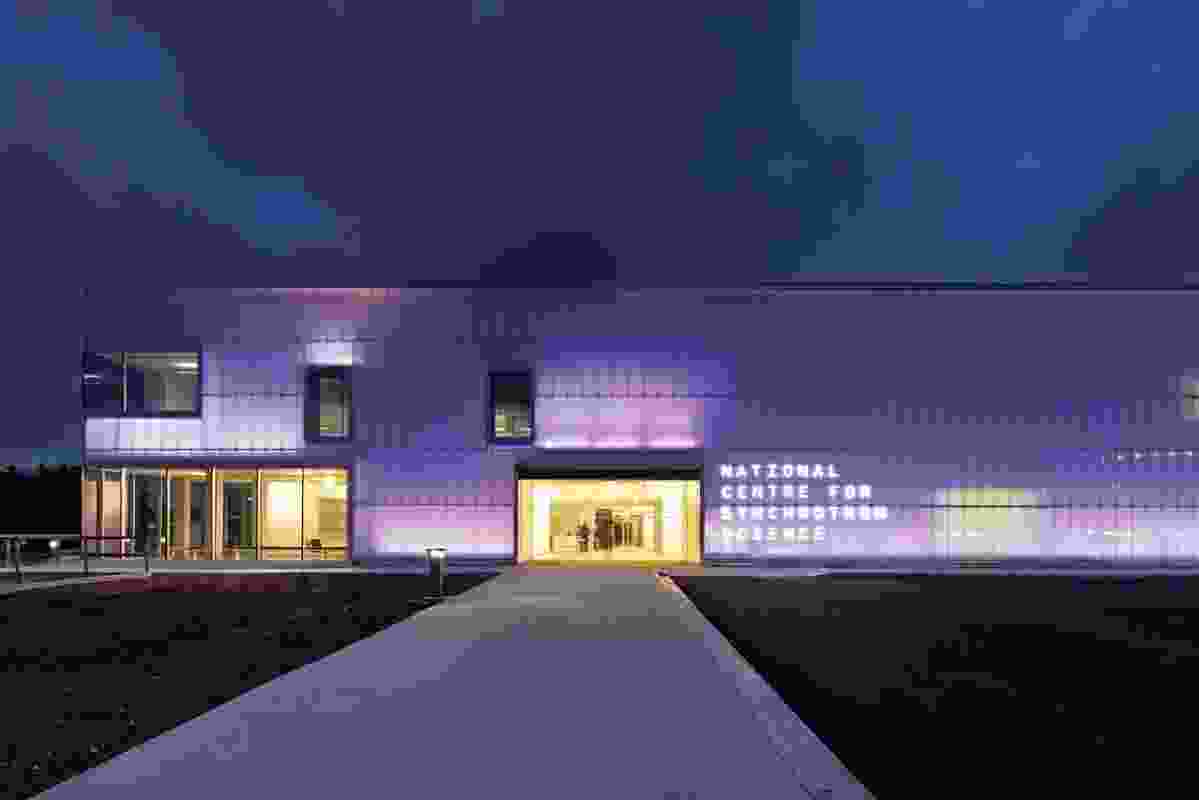 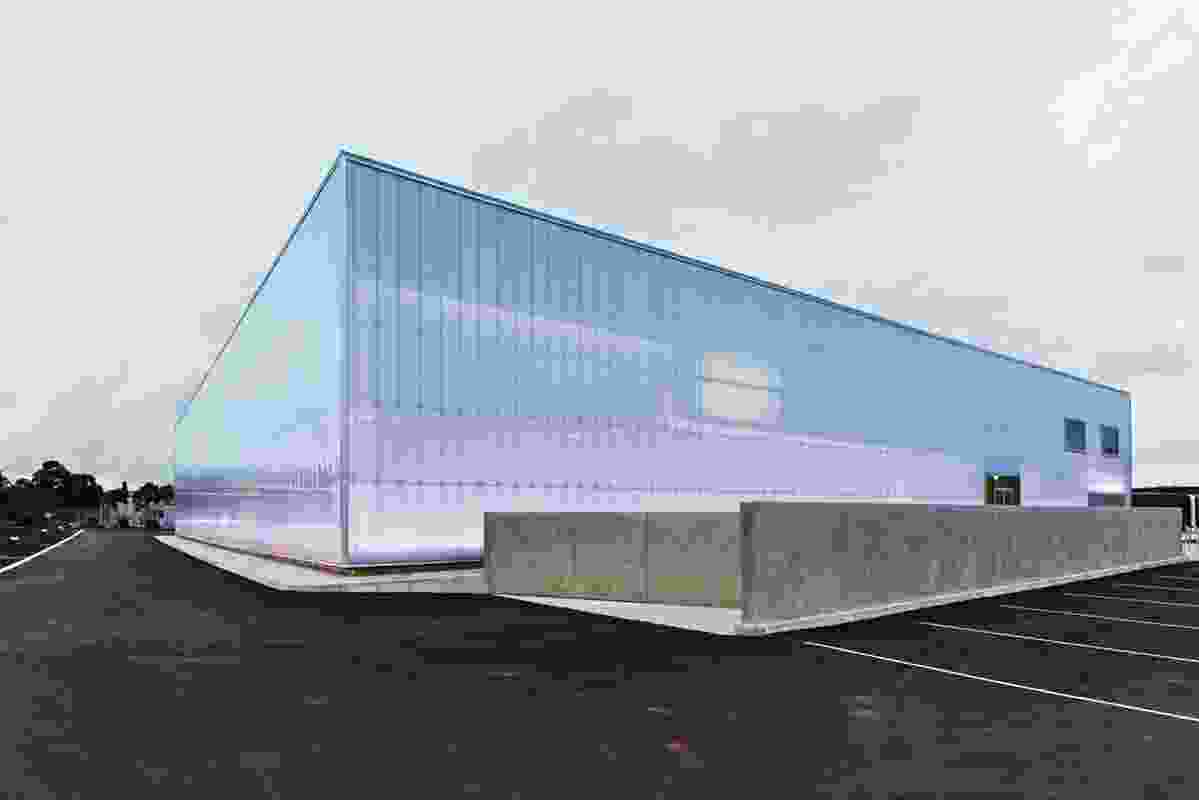 The facade system uses a jointing system of interlockable panels. 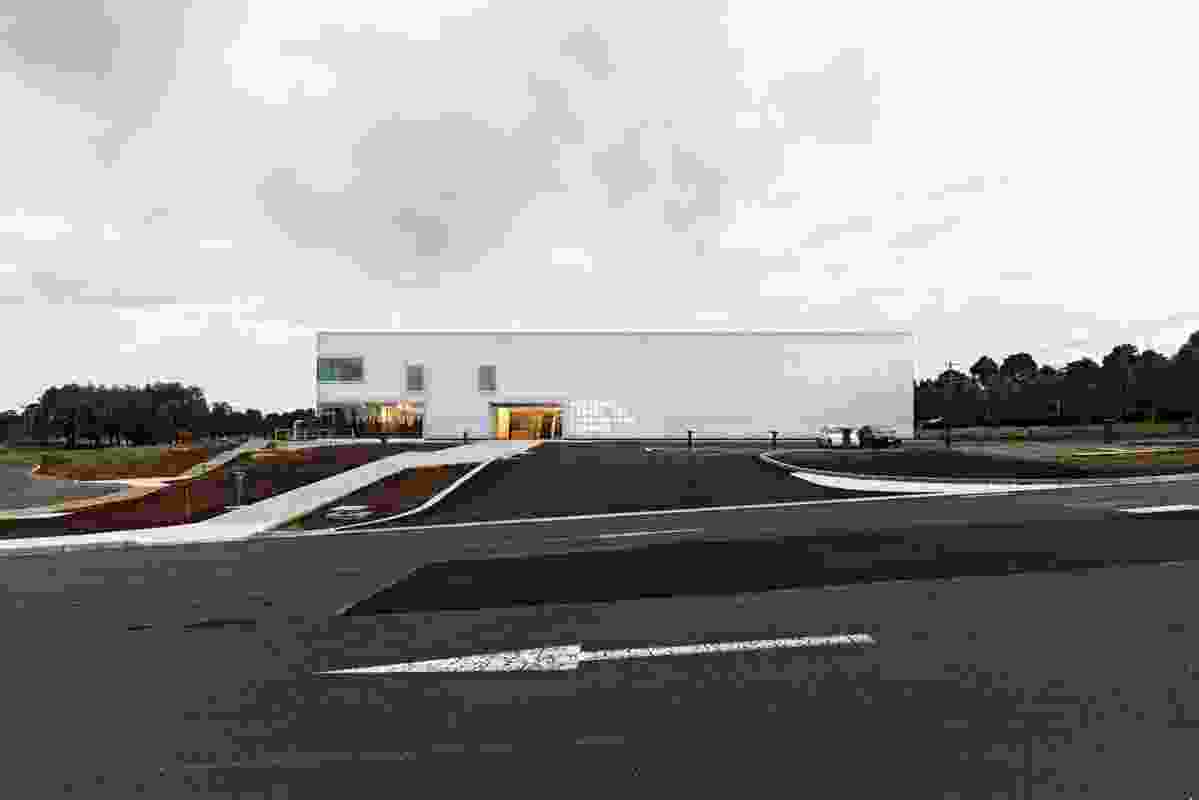 The design increases the sense of mystery that exists on the site. 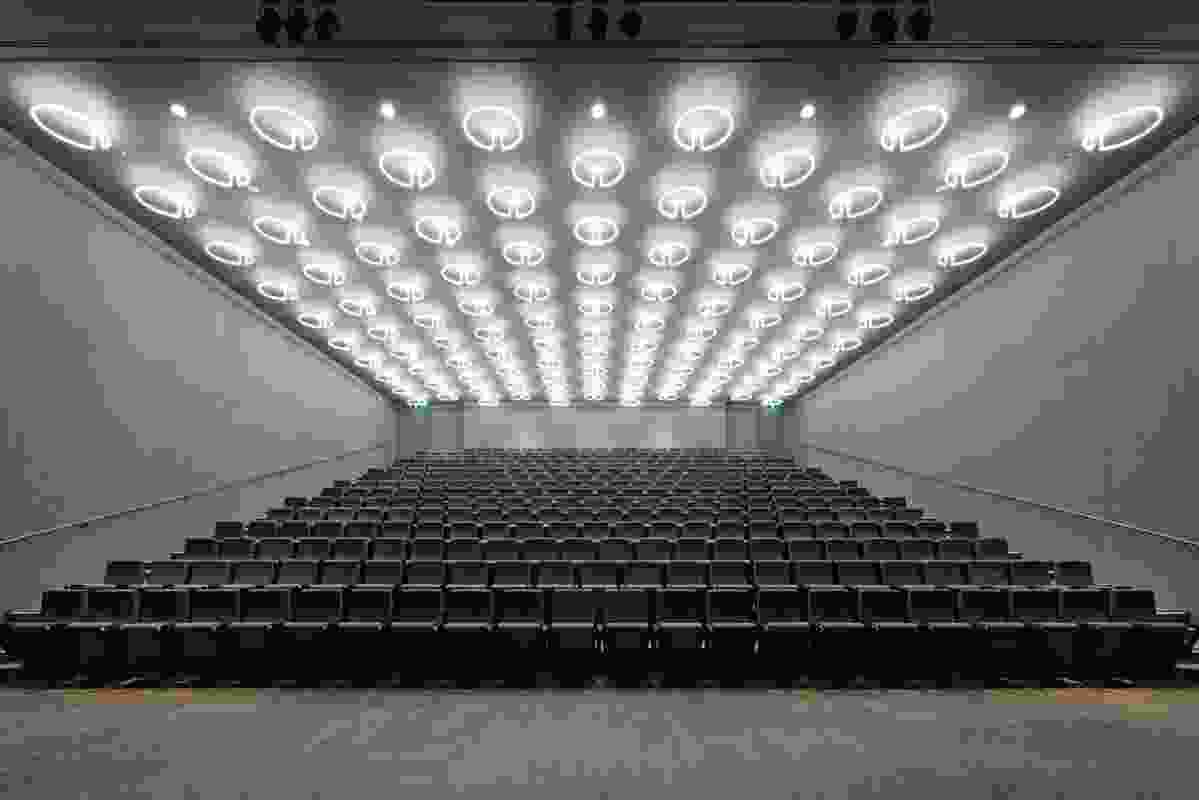 The lecture theatre’s fluorescent lights demonstrate the power of light. 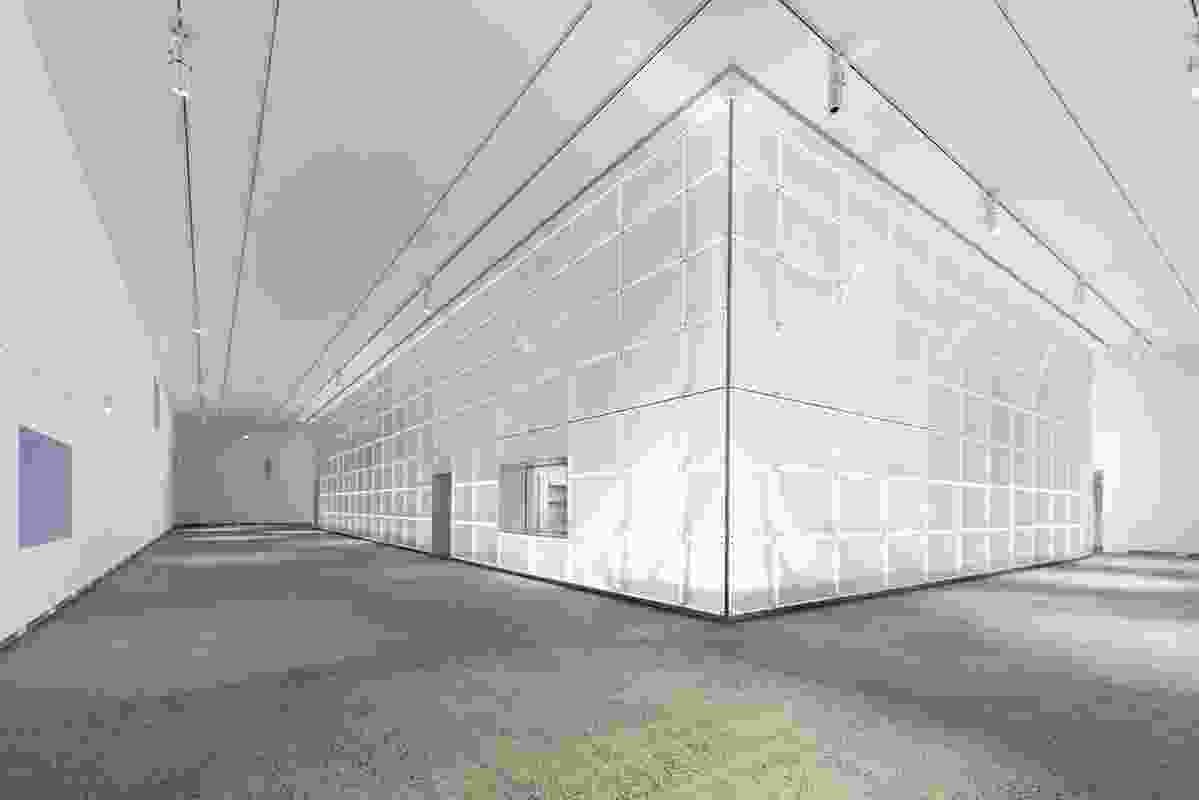 The lecture theatre has a jewel-like appearance. 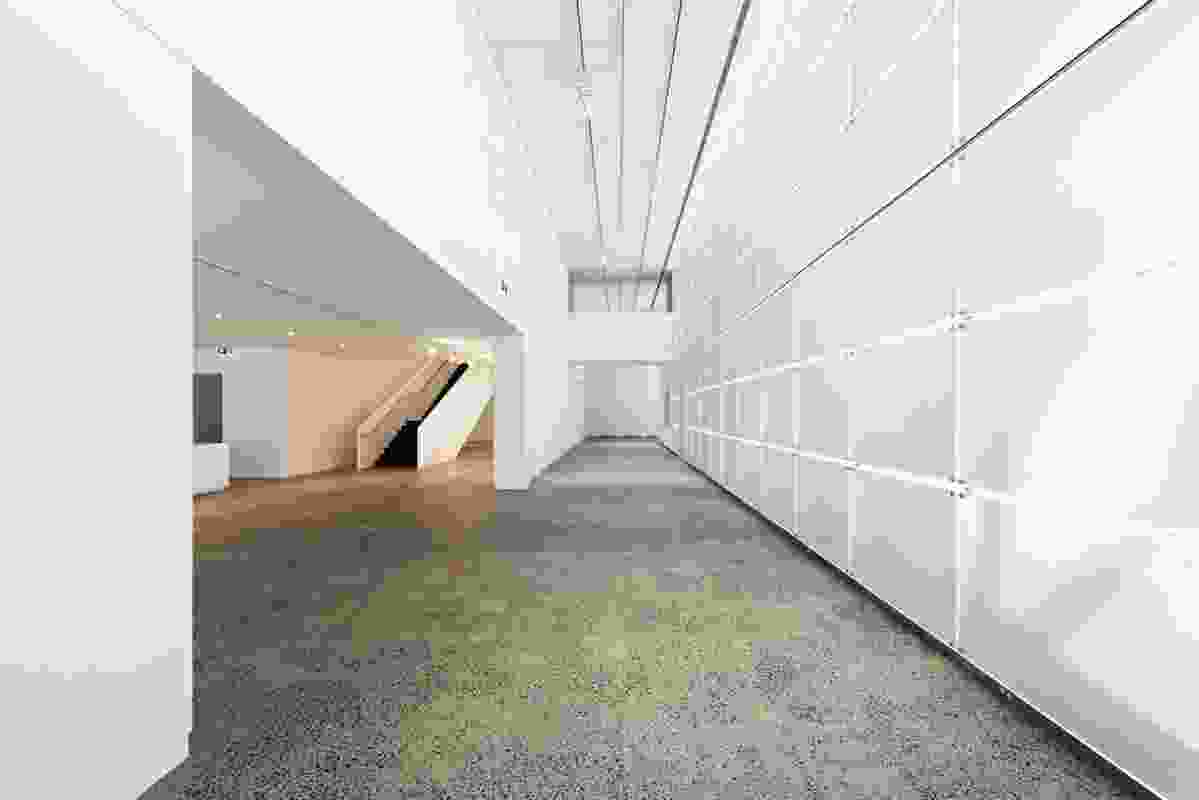 Different experiences of light are embedded within the architecture.