In Sydney’s beachside suburb of Tamarama, the new kiosk and amenities by Lahznimmo Architects and an upgrade of the park by Waverley Council, brings some glamour back to Tama, a favourite local playground.

Tamarama kiosk along the southern cliff aligns to the surfers’ boardwalk to the beach.

Along the coast walk from Bondi Beach to Coogee, the small bay beach of Tamarama has marked some of Sydney’s big demographic shifts through the decades. It was home to the city’s first seaside amusement park, built in 1887 on the northern headland where today’s Tamarama Surf Living Saving Club stands. Wonderland City, as the park was later named, had been dismantled by 1915 when the rocky inlet of Tamarama appeared as Anzac Cove in Alfred Rolfe’s war film, The Hero of the Dardanelles. In the 1930s, its serried cliffs were known as “cave city,” housing scores of jobless men and families in the grip of the Great Depression. Fast forward to the hedonistic 80s and 90s when it was dubbed “Glamarama” for the bronzed beefcake that patrolled the sand by day, and Darlinghurst by night.

In the post-Olympics property boom, Tamarama shifted gear again. Now multi-million-dollar houses and humble Art Deco apartments jostle for a view of the ocean and beach that’s today a playground for hipsters and young families, and a host to Sydney’s public art pilgrimage – Sculpture by the Sea. But like many of Sydney’s beach suburbs, there remains a core of die-hard locals for whom this beneficent beach is an extension of their own backyards. In October 2013, an upgrade to the ailing public facilities and parkland was unveiled – a new architect-designed kiosk and amenities block, and a resculpting of the park by Waverley Council with redefined pathways, new planting, picnic shelters and play equipment.

Gone is the old concrete cafe on the north side of the beach and decaying toilet block on the south. In their place are a small rounded pod (north) and a new cafe and amenities block (south), both designed by Lahznimmo Architects. This project marks a milestone for the firm, which celebrates twenty years of practice in 2014. The small Sydney-based studio punches above its weight in civic structures such as the award-winning Centennial Park Amenities (2005); Warragamba Dam Visitor and Operations Centre, a joint venture with Spackman + Mossop landscape architects (2009); and the Helensvale Branch Library and Community Cultural Youth Centre (2013) on the Gold Coast, done in association with Complete Urban.

Their original brief from Waverley Council had been to simply refurbish the existing Tamarama beach cafe and amenities blocks, but the premise was flawed and the best solution, according to Lahz, was to redefine the brief. This meant some long, hard lobbying at both a council and community level.

“The problem with the northern side of the park (where the original cafe was), was traffic: vehicular access down Marine Drive for ambulances, maintenance and delivery trucks and surf boats brought people and cars together in a tight space right beside the park and the beach. The brief to expand the kiosk (by around 30 percent) would have exacerbated this, and a larger cafe would have been out of scale with this part of the park. So we suggested consolidating all the public activities into one building and locating it on the southern side of the park, leaving just the storage and first aid for the surf life saving club in a smaller building to the north … Initally there was resistance in the community to a bigger building, but we consulted widely and eventually made the case.”

Moving the cafe to the southern side in a mixed-use pavilion achieved three important public benefits: it separated pedestrians and cars (which the council had wanted to do), it gave the cafe a sunny north-facing aspect, and consolidating it with the toilet and shower amenities gave an increased sense of public surveillance. While the envelope is considerably larger than the toilets and demountables it replaced, the transparency of the structure and its use of wood and stone achieves a sense of harmony between the green space and the bulidings. Placement of the structures was paramount and a great deal of thought was given to their alignment under the cliffs.

“We consciously set both buildings against the edges of landscape, to read as a backdrop to the varied activities of the park and beach,” says Lahz. “Together they bookend the beach, reinforcing pedestrian pathways and forming a gateway from the boardwalk to the park.” The surf life saving storage club pod blends stoically into the sandstone. With its curved pinkish concrete aggregate panels, fortifying hardwood doors and a flat pebbled roof, it “clings like a mollusc to the rock,” says Lahz.

By contrast, the kiosk is a hub of activity from sun-up. A similar concrete aggregate is included for the cladding, but mostly it is wrapped in slats of hardwood that are already weathering to a soft, silvery grey. Under one skillion roof, the building gathers up the busy cafe at the beach end, the central amenities block, and a utilities room for park maintenance crews at the western end. The cafe spills onto a broad deck, pockets of lawn and the boardwalk – the favourite route of surfers heading down to the waves. Far from concealing the central toilet block, its location is signalled by an overscaled circular washbasin that’s part folly, part roundabout – ladies to the right, gents to the left.

This gesture evolves Lahznimmo’s communal “wash trough” from the Centennial Park amenities, into what Lahz calls “the font,” for Tamarama. If there’s one criticism of the project, it’s that the size of the changing rooms seems compressed – a function of having to keep within the old building envelope while expanding access for wheelchairs. Perhaps that’s a small price to pay for such generous expressions in this utilitarian building. It’s one of several in fact – the slatted timber screens to its “outdoor showers” revealing glimpses of cliff face while you rinse, and the cafe window that frames a view of sandstone under the menu board, while you wait to order. These artful expressions elevate the everyday rituals into moments of delight. Not the thrill-a-minute of Wonderland’s rattling rollercoaster, but they do bring some quiet glamour back to Tama, and that’s in tune with the times. 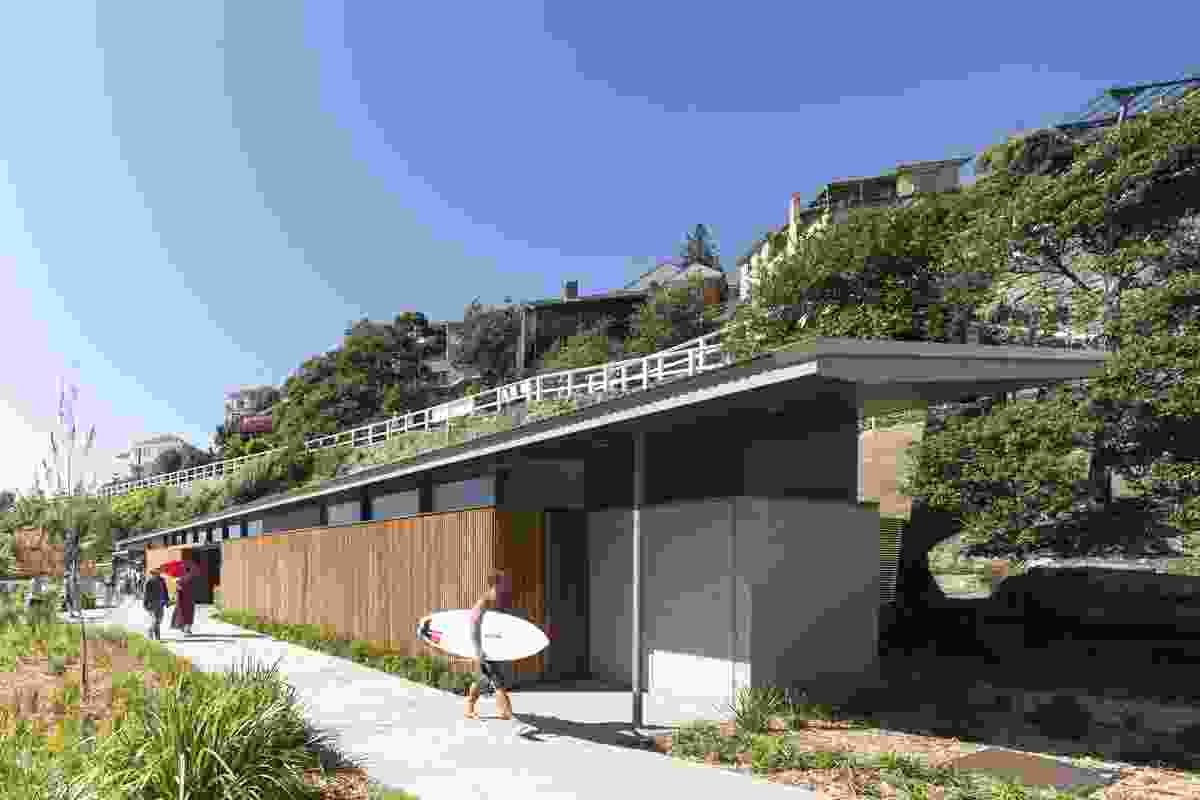 Tamarama kiosk along the southern cliff aligns to the surfers’ boardwalk to the beach.

Early mornings at Tamarama Kiosk, with the cafe and amenities in lock-down. 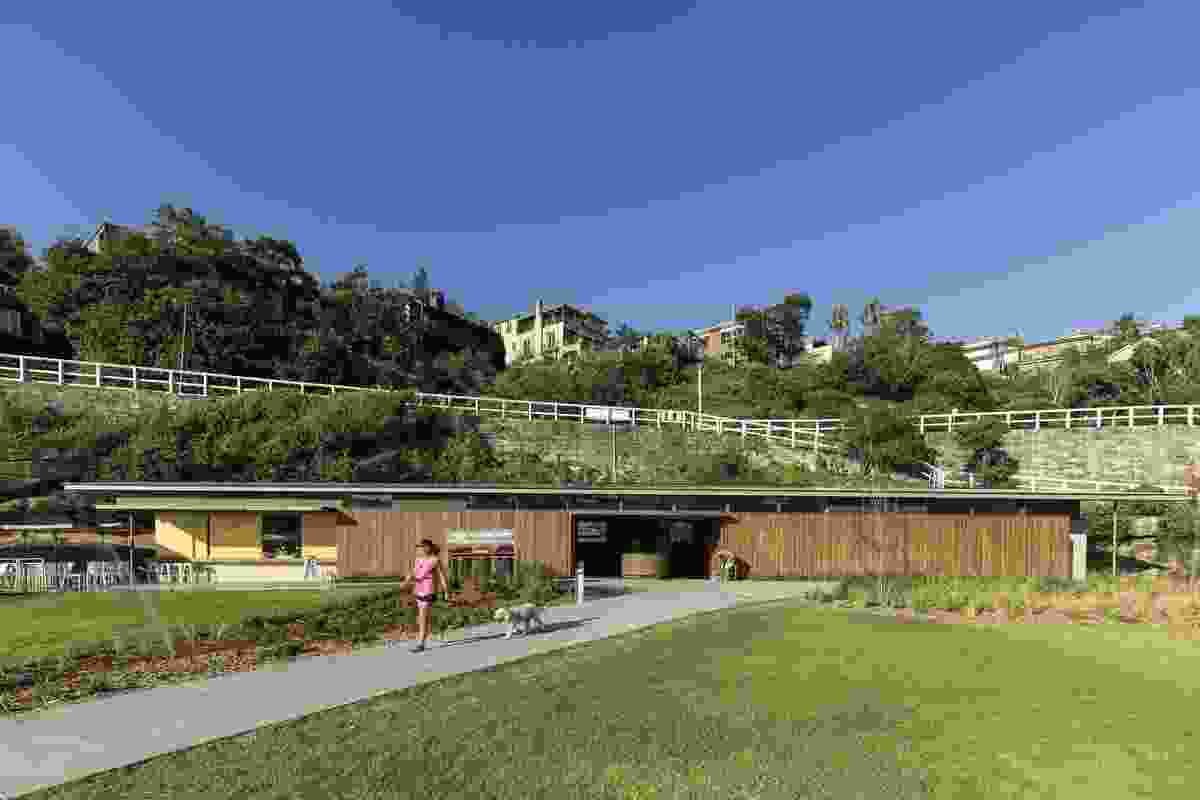 Tamarama Kiosk by Lahz Nimmo Architects gathers cafe, storage and amenities in a single building aligned to the southern cliff.

Tamarama Kiosk to the south and the curved concrete storage pod to the north bookend the beach. 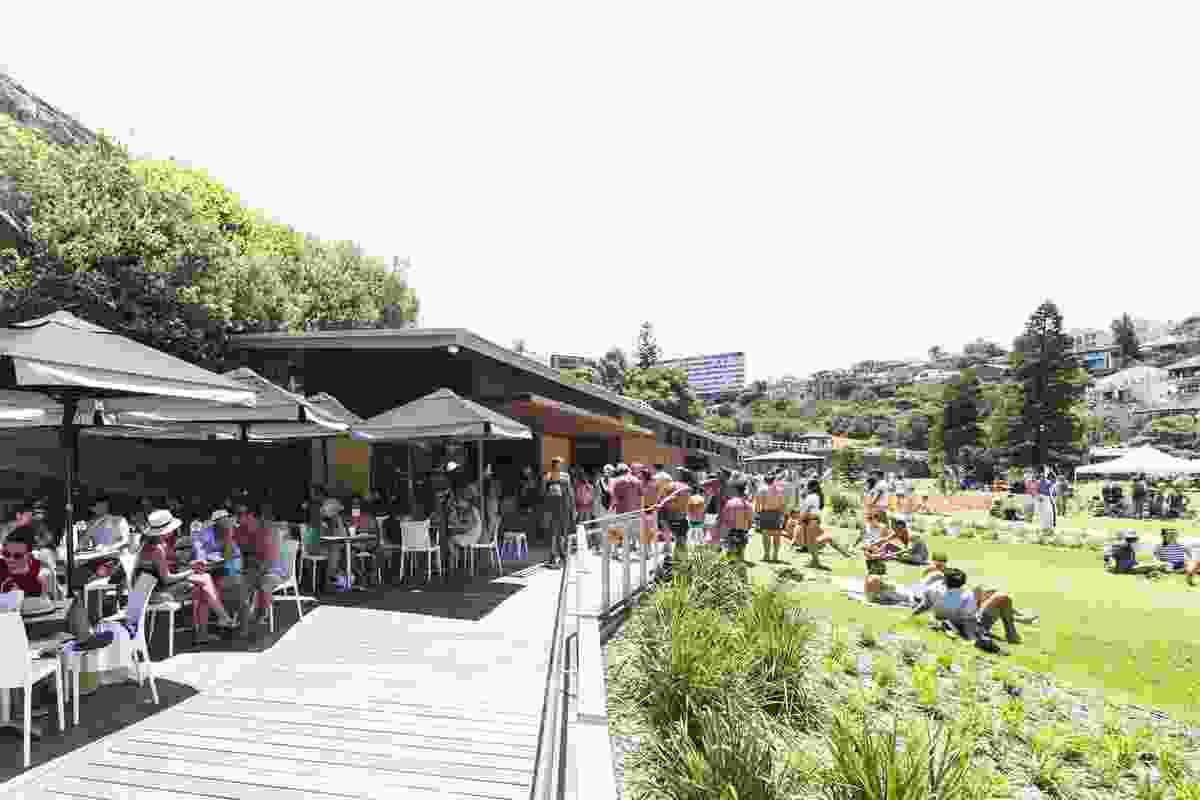 The kiosk in full swing: its environs encompassing pockets of the lawn, deck and boardwalk. 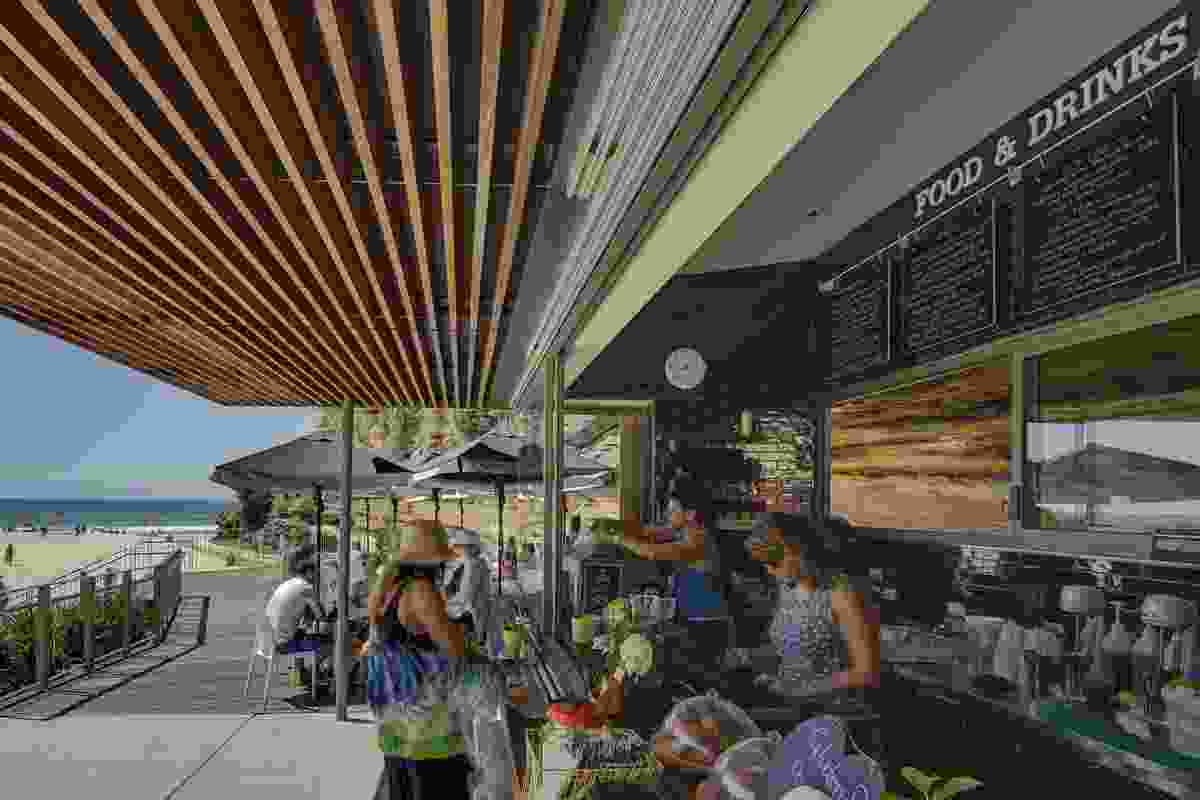 A rear window to the kiosk frames a view of the sandstone cliff. 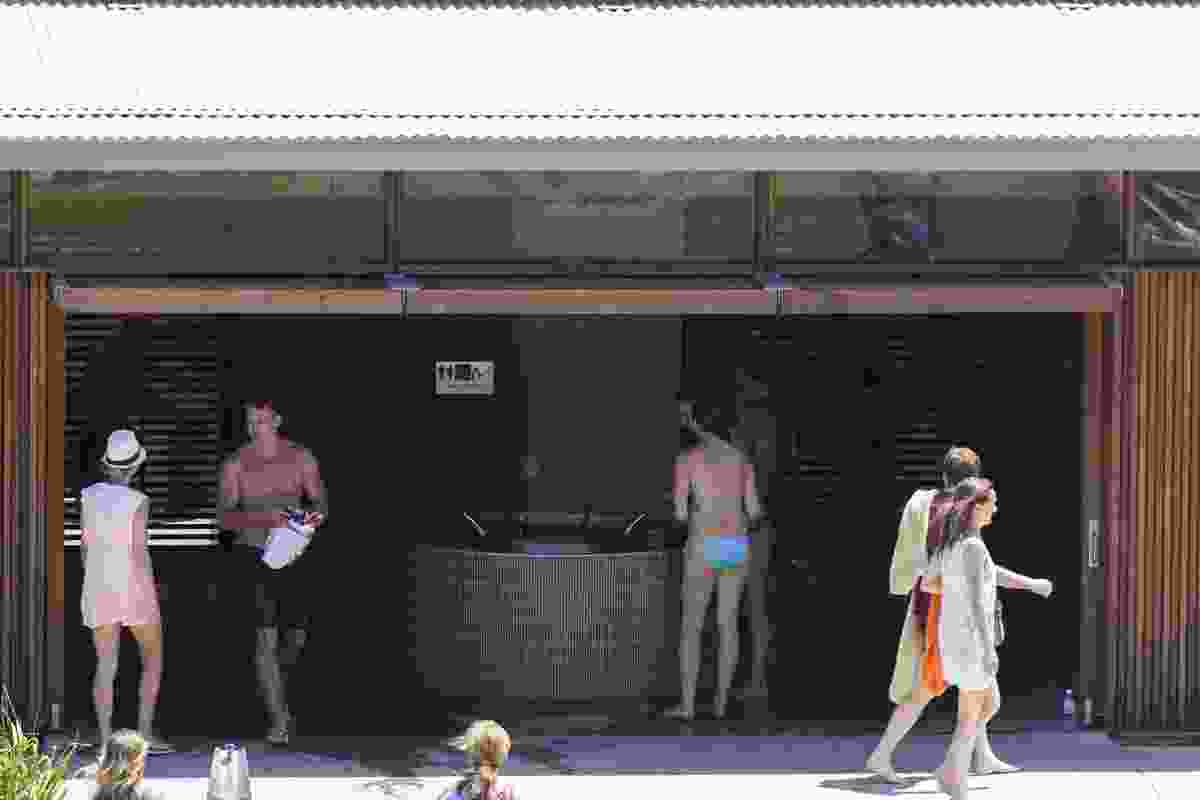 A communal washbasin (the font) activates the amenities block in a social way. 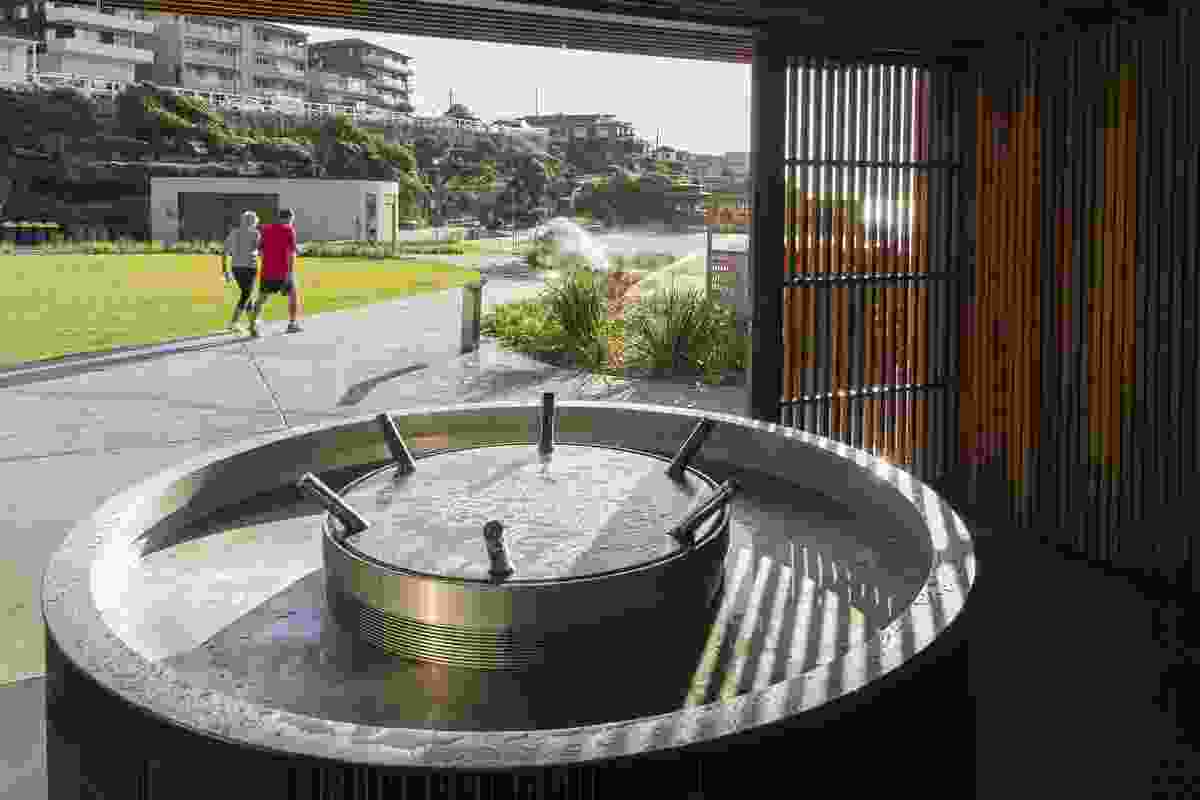 View from the font across the park. 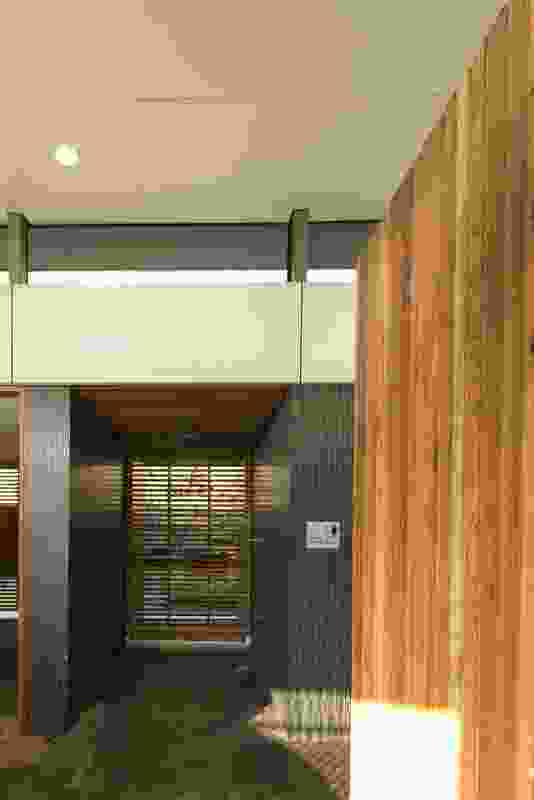 From the ‘outdoor showers’ glimpses of rock face can be seen through the slatted timber screens. Yohen Border wall tiles are from Artedomus. 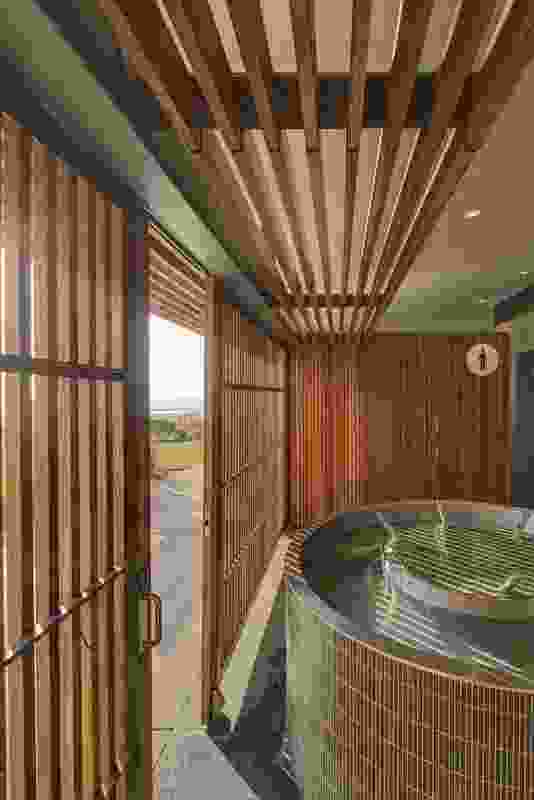 The hardwood language continues inside the amenities. 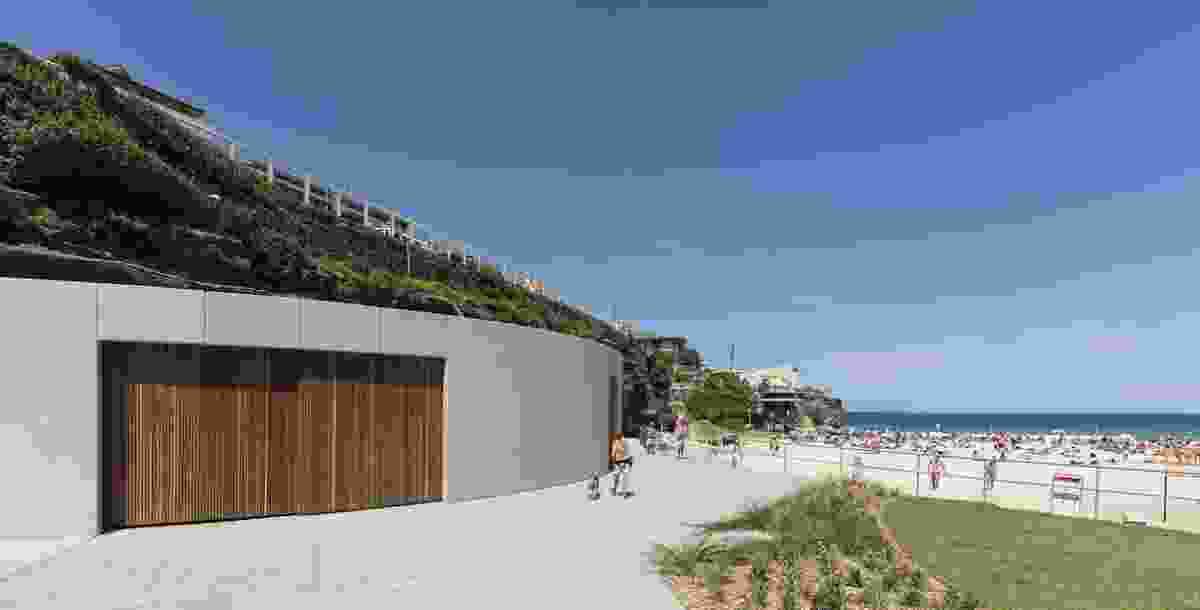 The site of the old kiosk is now a curved concrete storage pod for the Tamarama Surf Life Saving Club. 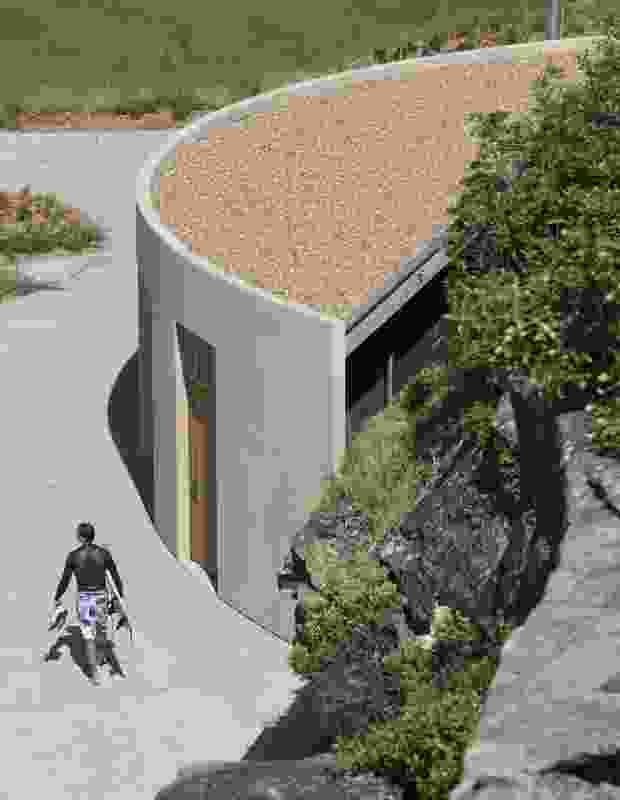 The storage pod tucks unobtrusively into the cliff face, at the end of the vehicular path. 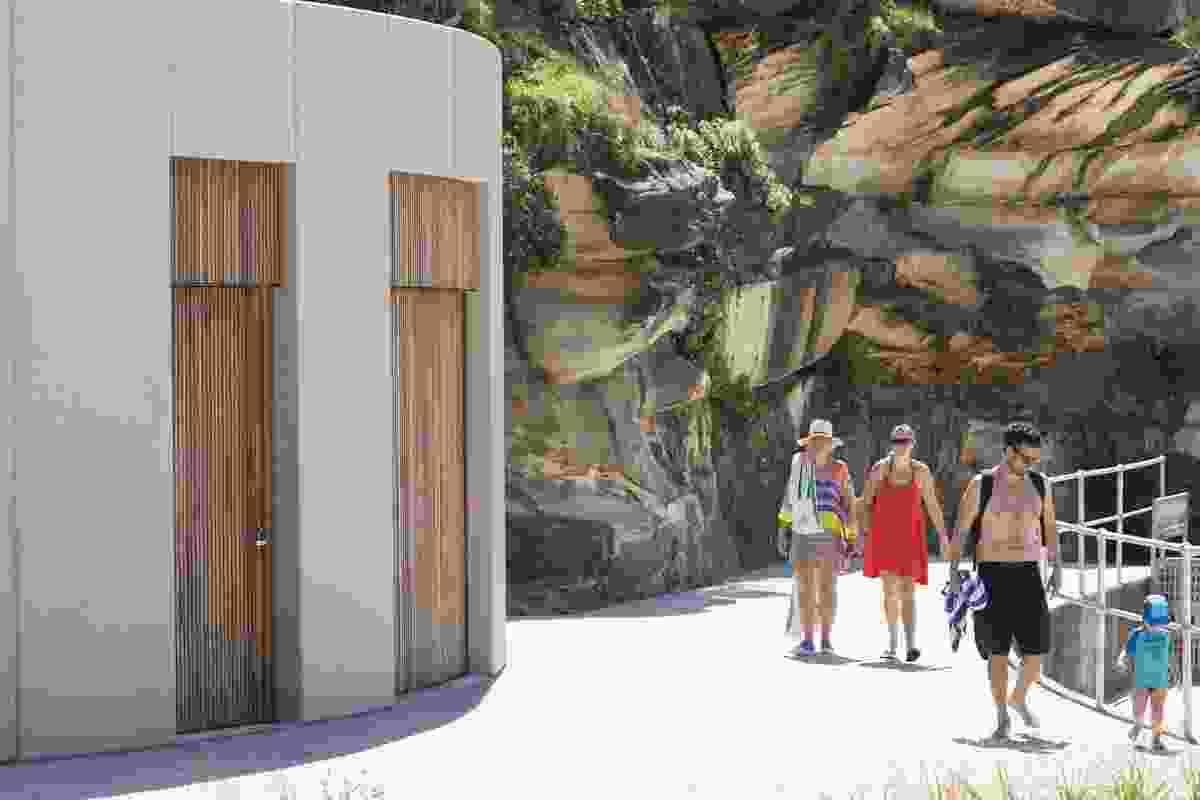 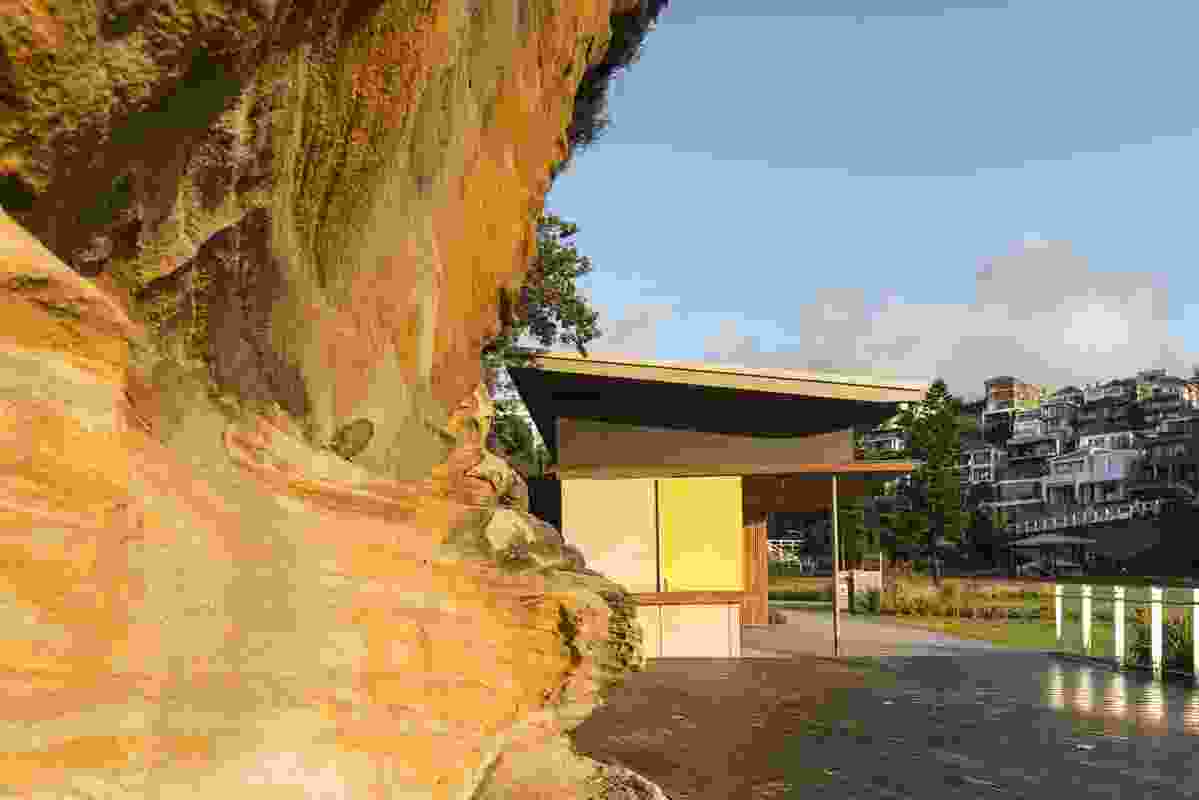 The eastern edge of the kiosk (in closed mode) seen from the deck. 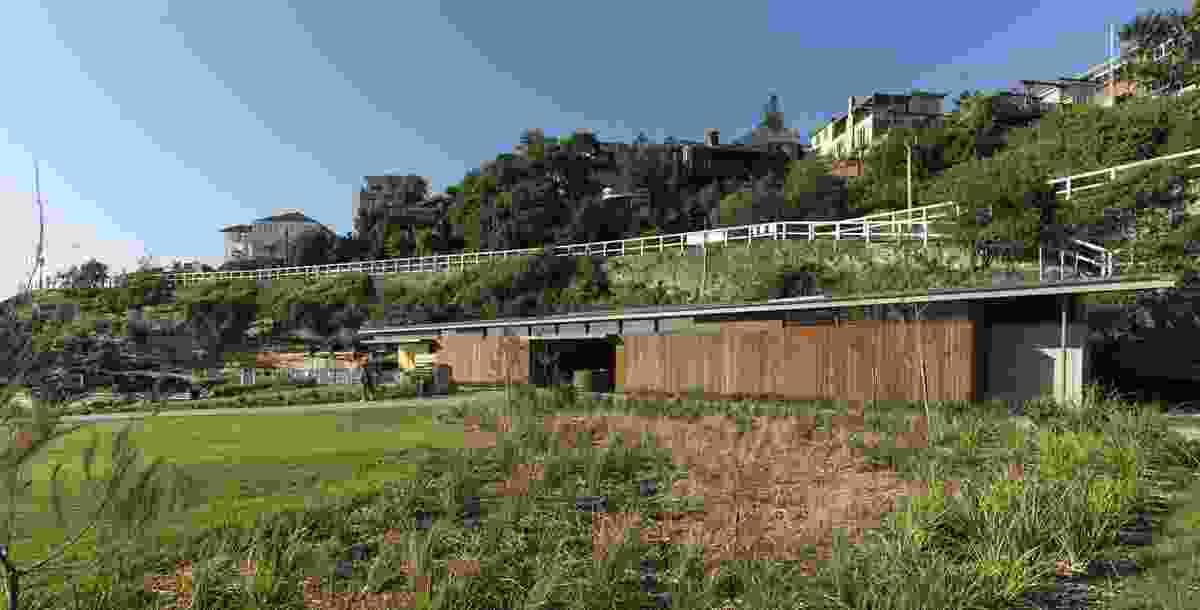 The kiosk by Lahznimmo Architects is supported by Waverley Council’s replanting of the park. 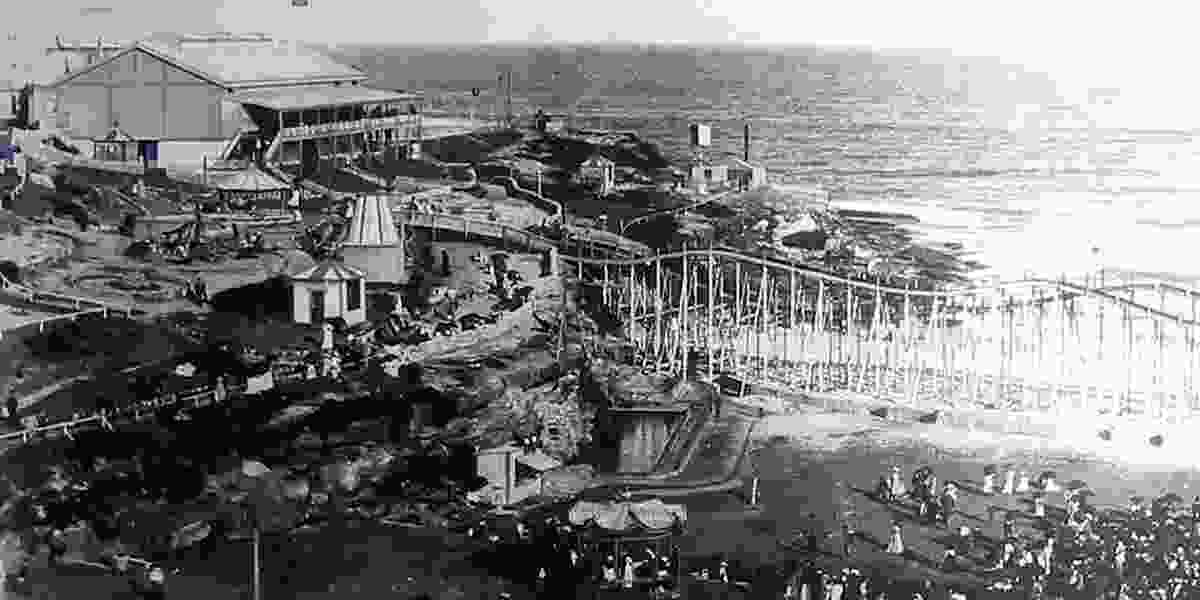