An exercise in shaping tall volumes, sculpting light and layering materials, this Brisbane home by Bligh Graham Architects is an exciting exemplar for small-lot housing in subtropical suburbia.

The control of light and views is celebrated through the use of brightly coloured steel light scoops and screens.

The streets of Tarragindi in Brisbane bring focus to the shifting patterns of development in postwar suburbia. As modest cottages on generous blocks are removed or demolished to make way for subdivision, architecture is forced to resolve a new set of rules in the face of smaller sites, tighter restrictions and a dwindling sense of neighbourliness. Tarragindi Steel House, designed by Bligh Graham Architects and constructed by owner and structural engineer Stephen Paterdis with his father Phillip Paterdis, explores the conundrum of building a new house on a small lot and finding delight in shaping tall volumes, sculpting light and layering materials, all the while testing the limits of the Paterdis family’s steel fabrication business.

In the absence of generous garden surrounds, Tarragindi Steel House seeks alternative ways to engage with the exterior realm. The building looks toward the street, backyard and sky, drawing on both appropriated and private territories for outlook, sunlight and ventilation. It also generates spatial interest from within, weaving a series of double-height volumes through the long extrusion of the two-storey plan. In these three double-height rooms – the library, the courtyard and the living room – the program is subverted in favour of engaging with the ephemeral qualities of light, material and atmosphere.

Unlike neighbours who accept blinkered sides, Tarragindi Steel House finds ways to celebrate the control of light and view through perforated-steel light scoops and screens fabricated by Paterdis Steel. Boldly finished in daffodil yellow, the light scoops are code-compliant, achieving accurate transparency levels and view angles while giving expression to an otherwise subdued exterior. As well as managing privacy, the screens wash the interior with a gentle warmth by day and provide a golden glow for the enjoyment of the street by night.

The building’s neighbourly attitude is evident as the garden courtyard comes into view, extending out to the footpath like welcoming arms outstretched. Beyond the gatehouse the gentle descent to the garden path condenses the public-to-private transition and strengthens the sense of refuge established by the solid walls of the sunken entry court, pushed hard to the edges of the street. The striated texture of off-form concrete walls and the origami-like folds of steel plate screens set the tone for a building that is raw and expressive externally and refined and delicate internally.

The yellow perforated screens above the entry vestibule encourage passage to the front door and give interior spaces a golden lustre. As a counterpoint to the compression of low timber ceilings at the entry, in the adjacent library the ceiling lifts as views open out and upward. This connection between upstairs and downstairs, inside and outside, is part of the ceremony of occupying the special double-height rooms of the house. Strengthening the sense of verticality, a two- storey bookshelf is formed in Tasmanian blackwood timber and adorned with the fine filagree of the steel, which frames vertical ends and forms a ladder.

Where brick walls appear to carve out a negative space from the solid mass of the building, another double-height room, this time outdoors, sits at the centre of the plan. Familiar yellow powdercoated perforated screens act as curtains to soften the blank facade of the neighbouring dwelling. The central courtyard is a superbly scaled and executed space, not least because it offers a sheltered outdoor living room and cooling relief in Brisbane’s subtropical climate. Importantly, it provides a means by which surrounding rooms can generate light, air and outlook on a compact site, independent of surrounding development.

Acting as the bookend to the building, the double-height living room brings another set of spatial and climatic opportunities, particularly suited to winter. Generous window openings allow the back garden to come into focus while encouraging the low winter sun to gently warm the concrete floor inside. At dusk the double-sided fireplace draws attention to the impressive brick wall that anchors the room and provides the backdrop to more steel recesses designed to house electronics, television and fireplace. As the sun sets and the family retreats upstairs, the warmth generated by the fireplace can be shared by the bedroom above via operable shutters.

In the context of restrictions and limitations it is rare to find a small-lot house defined by generosity. Tarragindi Steel House bestows spatial generosity upon rooms and gardens as well as a sense of civic generosity toward the street and neighbourhood. Its holistic approach to sun control and passive cooling and heating also makes it an exemplar for climate-responsive design. Beyond this, the construction of the house tells the tale of two generous spirits, Stephen and Phillip Paterdis, and their admirable determination to challenge both themselves and the material upon which their family business was founded. Bligh Graham’s design innovations generously demonstrate the exciting possibilities for small-lot housing in subtropical suburbia. The control of light and views is celebrated through the use of brightly coloured steel light scoops and screens. 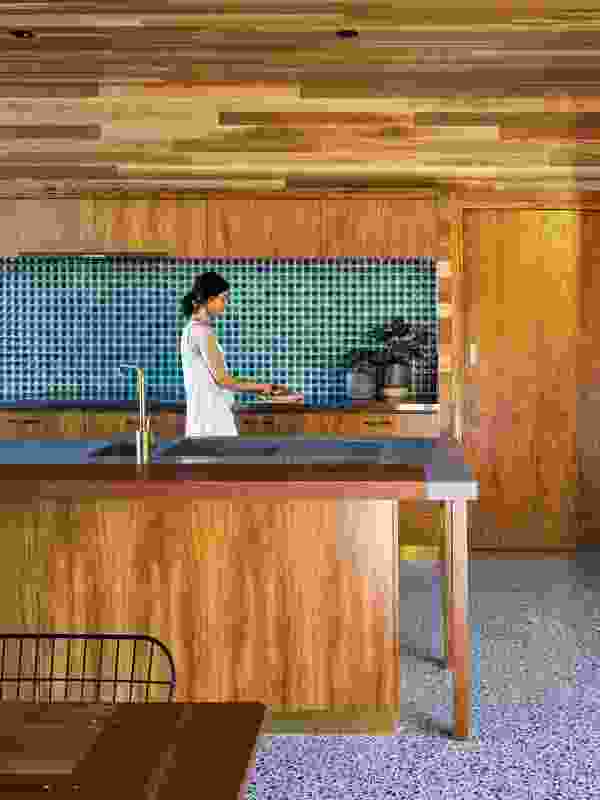 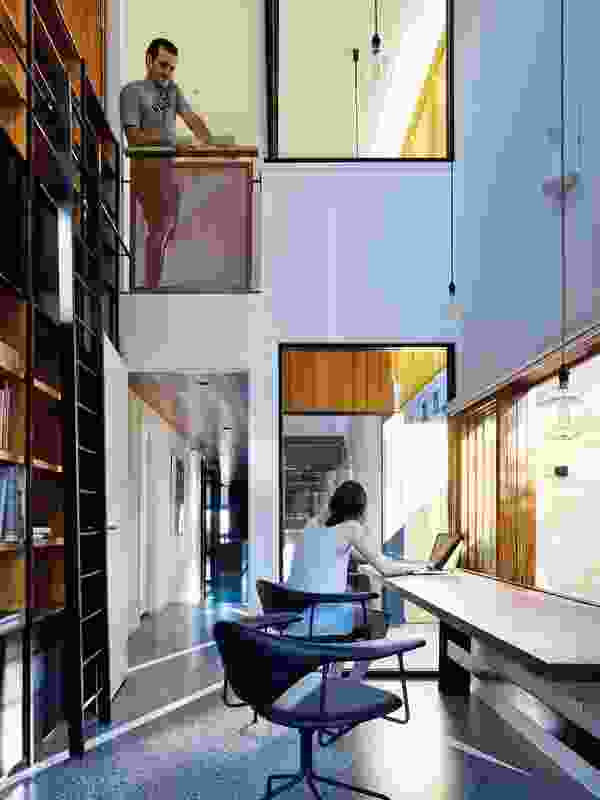 Strengthening a sense of verticality is the two-storey bookshelf formed of Tasmanian blackwood and steel. 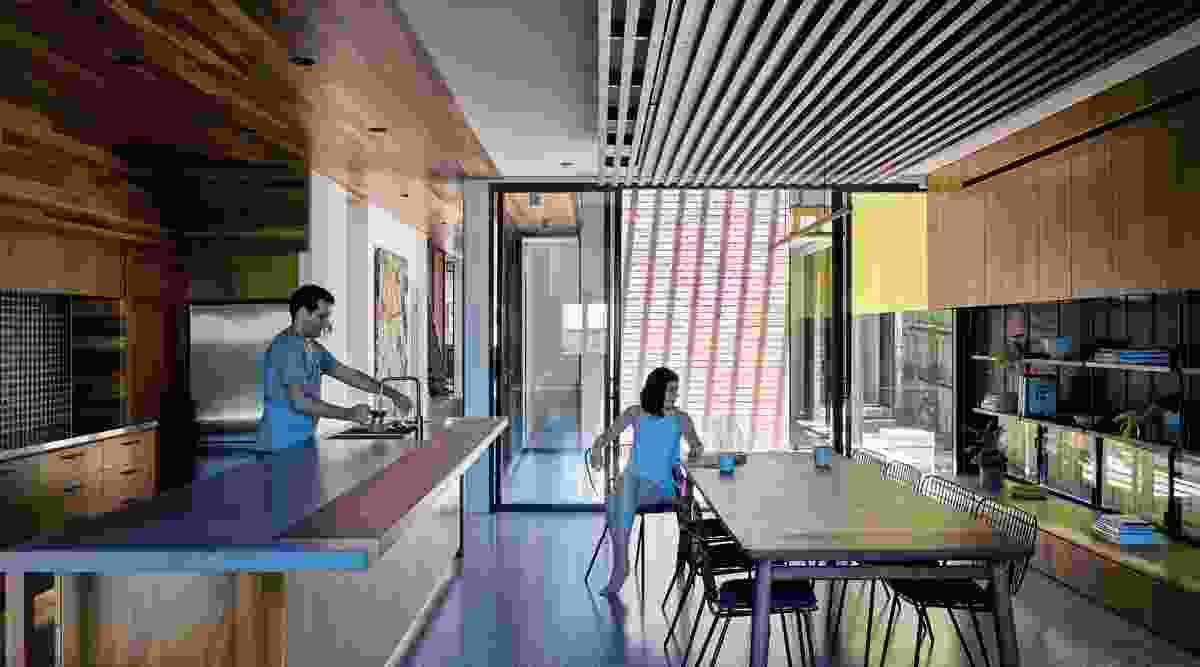 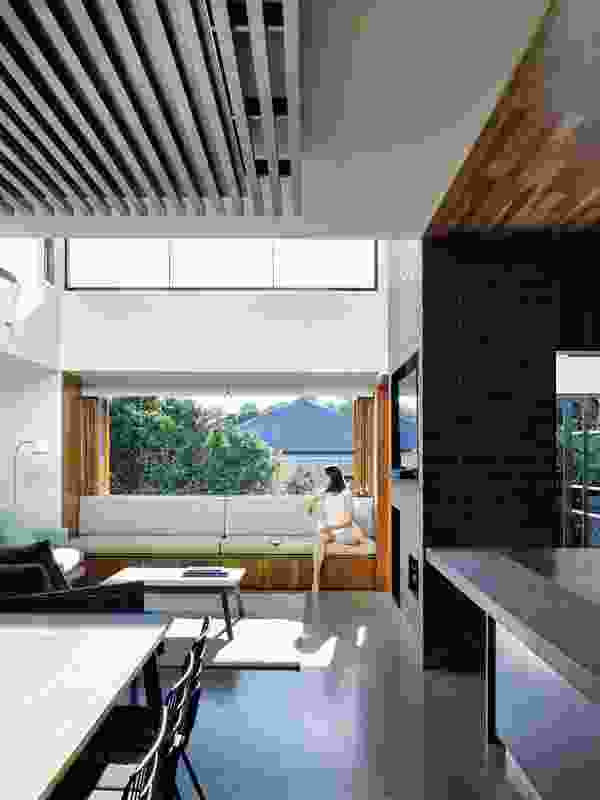 A series of atmospheric double-height volumes has been weaved through the long plan. 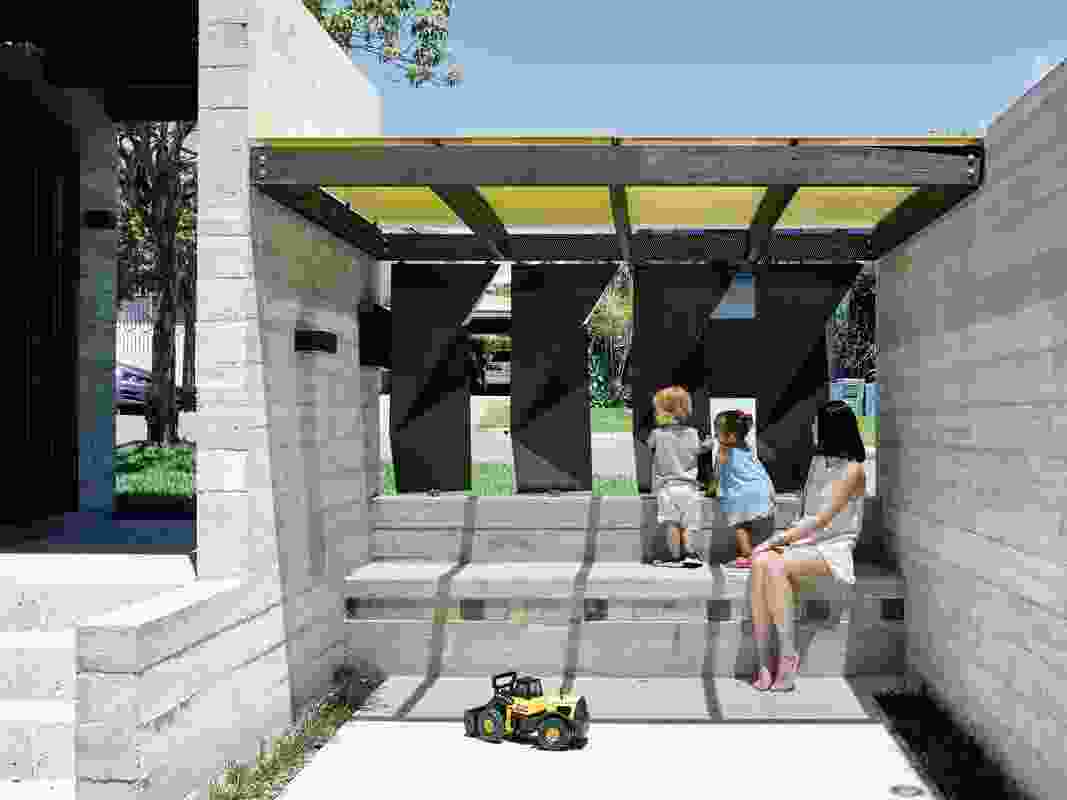