A small-scale intervention turns a heritage-listed sandstone cottage into a contemporary home and studio. Architect Eoghan Lewis explains his approach.

The polycarbonate-clad, hardwood studio at the rear.

Tempe is a former industrial suburb in Sydney’s Inner West. On the site of an old quarry, the existing heritage-listed sandstone cottage is one of several built on Collins Street by the same mason in the early 20th century.

Design strategies were derived from a pragmatic response to site conditions, potential inside/outside relationships, heritage restrictions coupled with our desire to add a sensitive, ecologically responsible layer that would unlock the “problem” of the project; the relationship of the cottage to its context.

Additions are modest in size: only forty square metres were added with the majority of work occurring within the existing footprint. The planning was rationalised and spaces opened up, the kitchen moved to the centre of the house, the bathroom enlarged and internal/external thresholds designed to open completely up.

Obtrusive additions were removed, the bricks salvaged for reuse in a series of deep courtyard steps that effectively elongate the living space, making stronger the relationship between house and garden. Two new pavilions were added: one attached for living, the other a detached studio-shed or “shedio”.

The bathroom was inspired by Japanese bathhouses or onsen; by the idea that the garden participates intimately in the experience of bathing. External hardwood sliding screens open framing a mature frangipani. A second screen provides privacy and insect protection. The black slate interior visually prioritises outside over inside, reinforcing the idea of the bathhouse/garden refuge.

A new studio, perched at the back of the yard screens a not-very-handsome neighbour. The exposed hardwood structure is revealed on the garden (south western) side and clad in an insulating triple-glazed polycarbonate skin that filters southern light by day and transforms into a glowing lantern by night.

Acknowledging the integrity of the existing sandstone cottage and the site’s significance to the industrial history of Tempe, we wanted to demonstrate a critical response to heritage by establishing a dialogue of gentle resistance between old and new. That is, the additions establish a relationship of counterpoint with the existing cottage. New works stitch quietly into the old, dramatically opening up and reorganising the interior, seeking to blur inside/outside, new/old relationships in a direct and powerful way.

What were once external windows and doors become slots connecting the kitchen and living spaces. The existing chimney – a feature of the old cottage – is now the focus of the kitchen. Framed by joinery with a sculptural skylight void above, the chimney is reinforced as a significant element.

Materials were selected for their ability to age gracefully and contribute in this relation of counterpoint whilst nodding quietly to Tempe’s industrial past. Recycled bricks, spotted gum cladding (stained), external-sliding blackbutt doors and windows, plywood, polycarbonate, copper and black slate; a material palette that will age like a South Australian red. 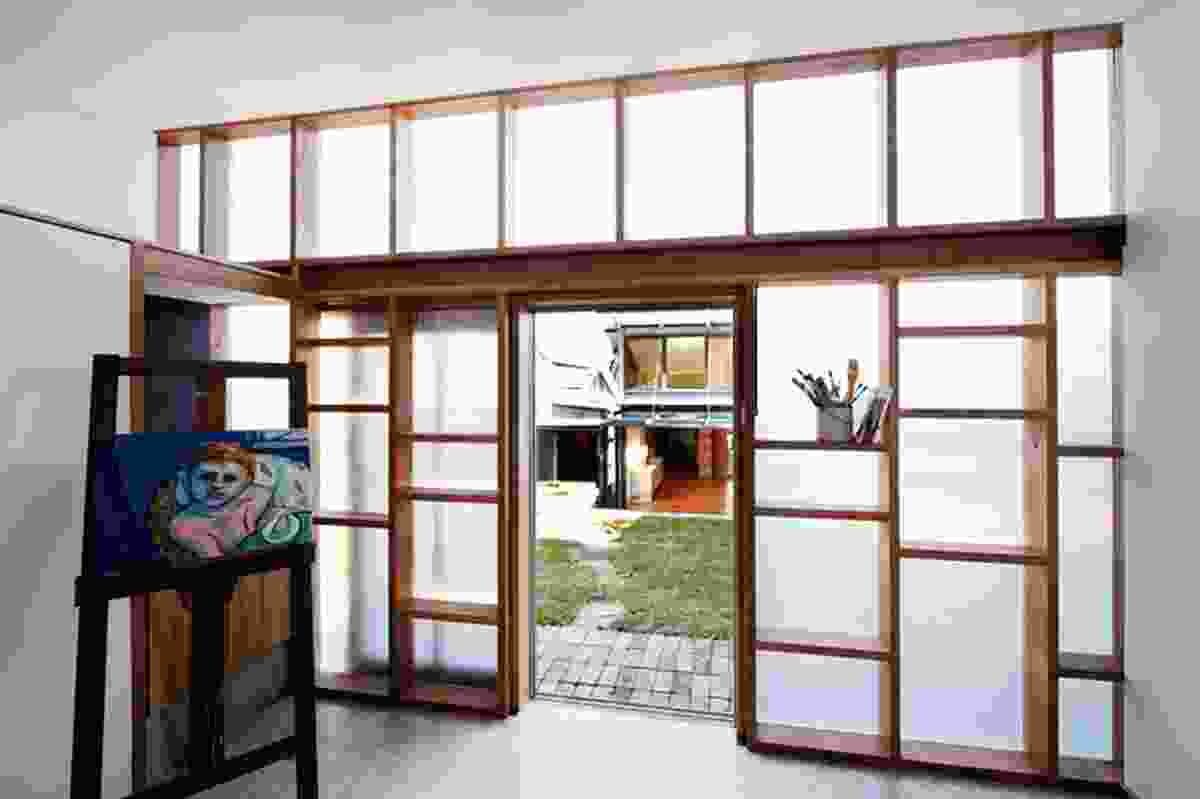 The polycarbonate-clad, hardwood studio at the rear. 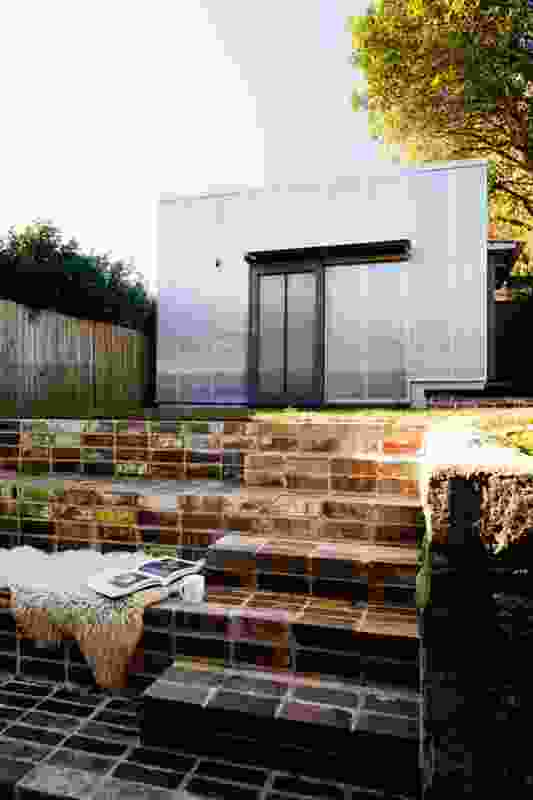 Salvaged bricks from the demolition are reused as paving and courtyard steps. 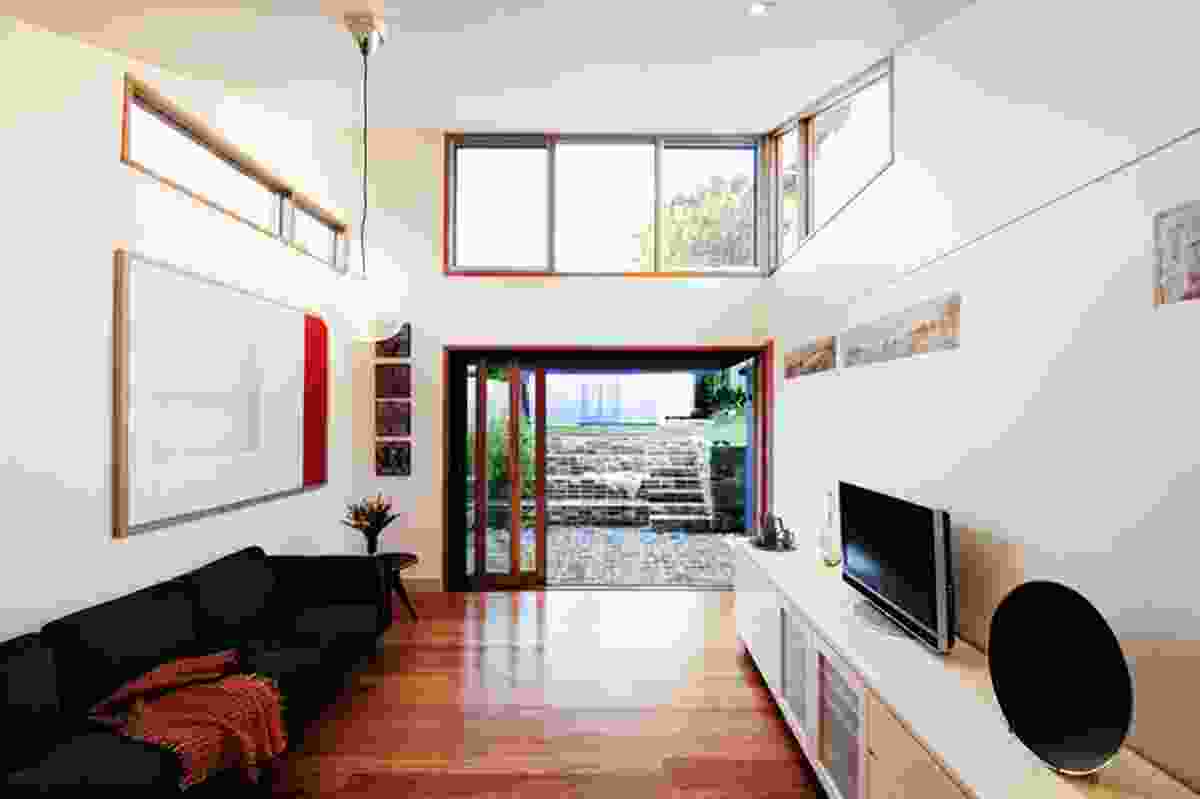 The compact living room is generously lit with clerestory windows. 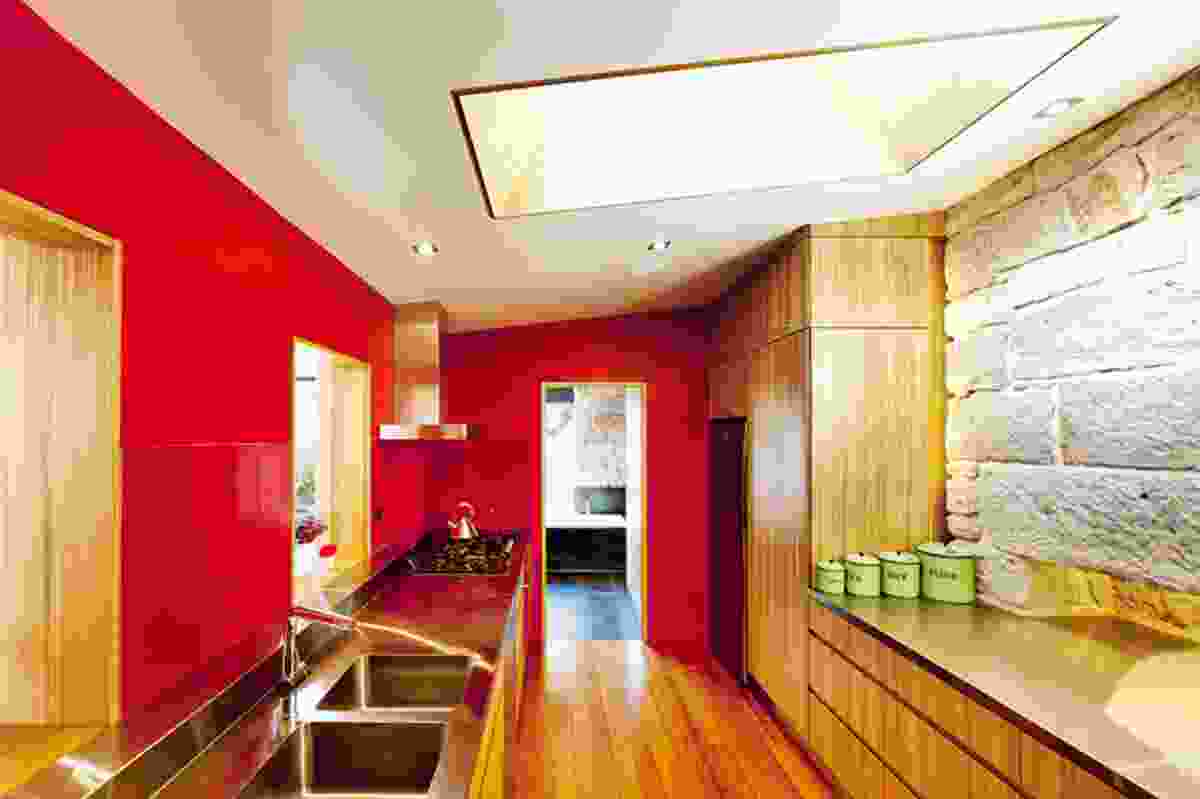 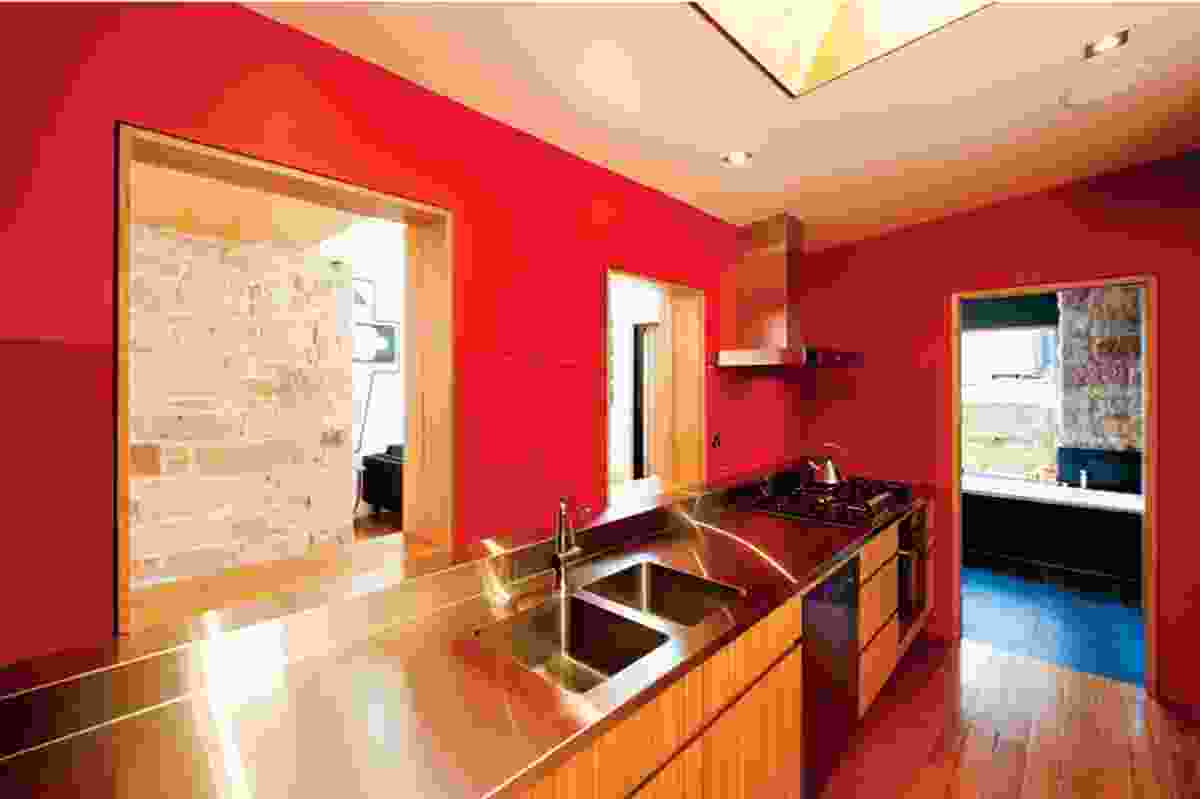 New kitchen and skylight in the existing cottage. 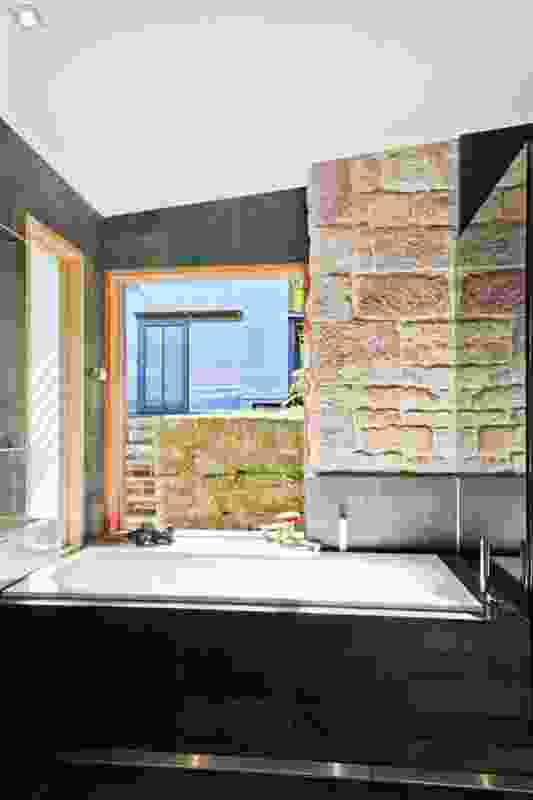 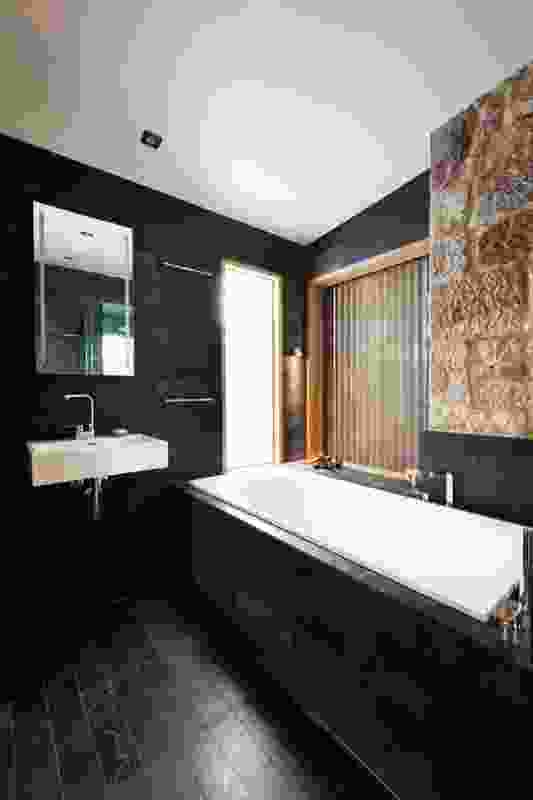 The new slate and plywood bathroom within the existing sandstone structure. 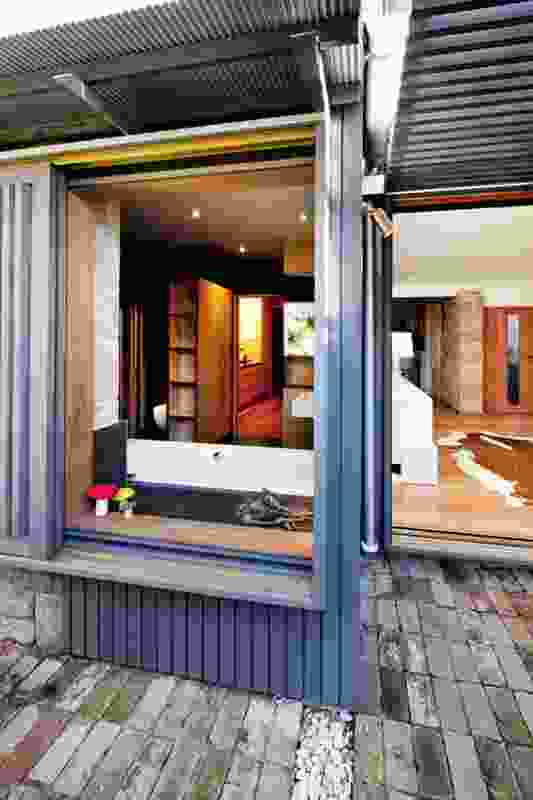 Detailing is pragmatic, direct and no-nonsense. 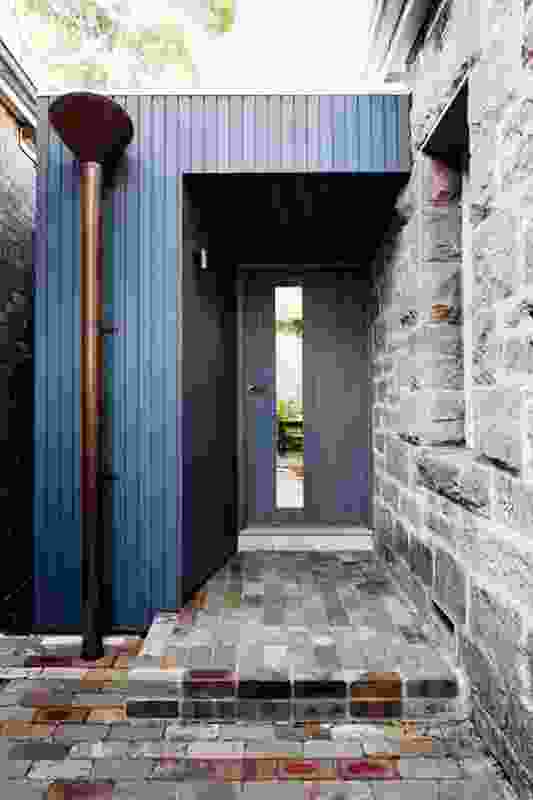 Formally and materially additions speak in counterpoint with the existing cottage. 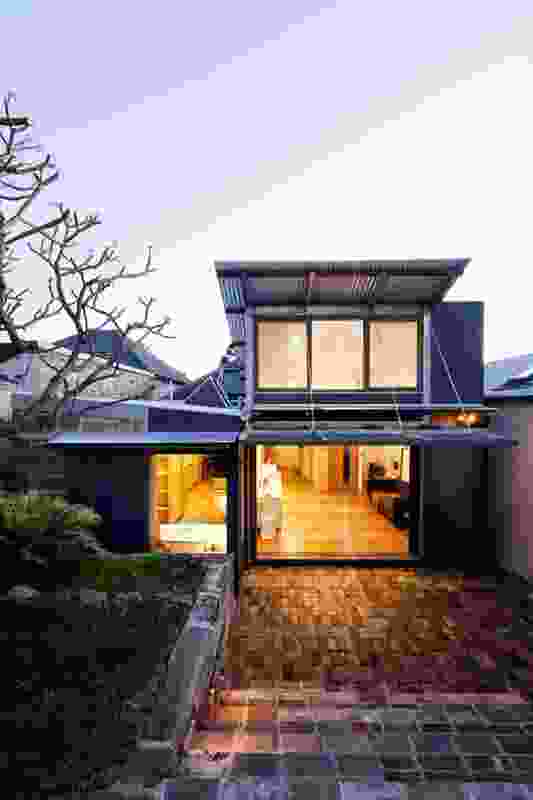 The courtyard works as an extension of the living space. 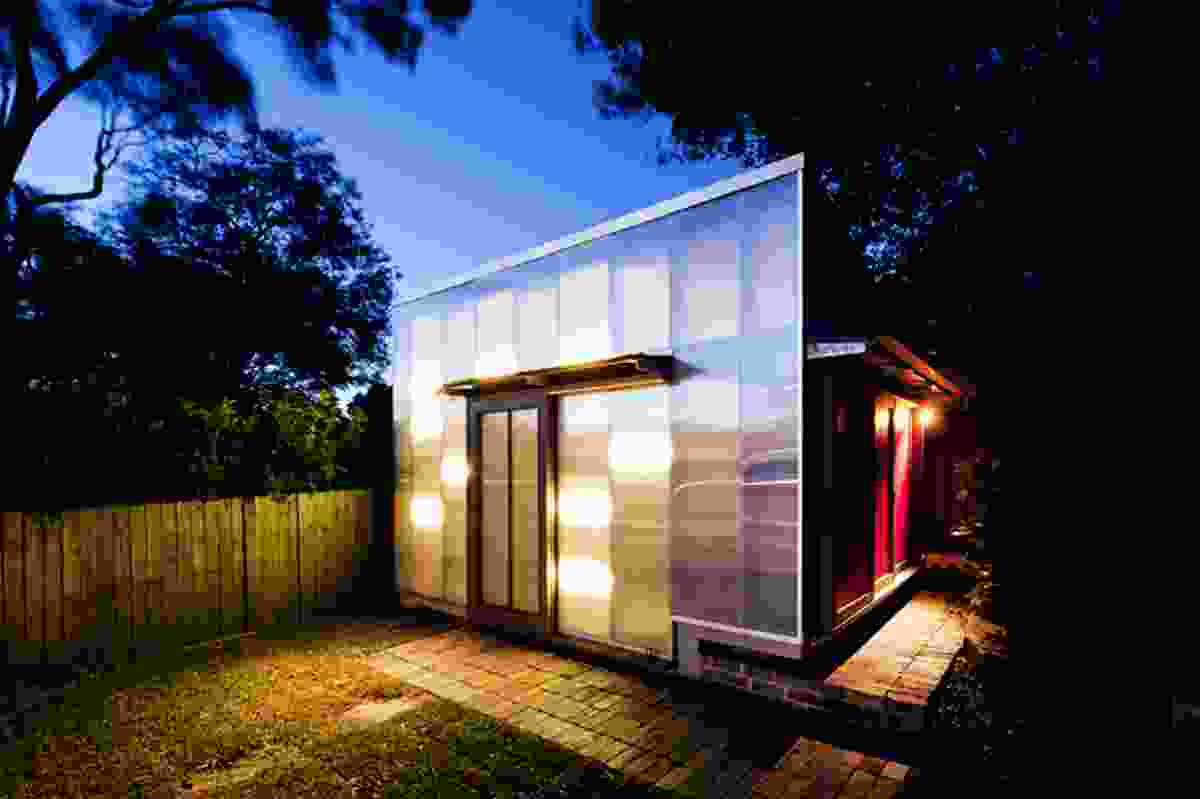 LED lights behind the polycarbonate cladding transform the studio into a lantern at night.