The development at Rosny Hill Recreation Area at Circa Morris-Nunn Architects.

A controversial proposal for a hotel and other visitor facilities in a public reserve in Hobart has been recommended for approval, but opponents of the project are gearing up for a fight.

Designed by Tasmanian practice Circa Morris-Nunn Architects, the development at Rosny Hill Recreation Area would include a hotel with 60 guest suites, including six discrete duplex “pods,” as well as a spa and pool available only to guests.

New paved areas and public lookout structures would be built around the hill to the south and west, partly over the top of the hotel, along with public toilets, a restaurant and a kiosk/café.

The project was first presented by Circa Morris-Nunn in 2015, after the Clarence City Council put a call out for development proposals, and it has since faced fierce opposition from community groups concerned about a private development on public land. The initial scheme has been drastically modified, with the hotel capacity halved, and a planned convention centre dropped, but residents say they will never support the plan, according to the ABC.

Councillors are due to vote on the development application on 22 January, with management having recommended approval. Both the proponents and opponents, however, say they are preparing appeals to the Resource Management and Planning Appeals Tribunal, should the decision not go their way.

Some 541 representations were made during a period of public consultation, with respondents raising concerns about the visual impact of the project, the giving over of public land to private interests, and the affect on native vegetation and fauna.

“Rosny Hill belongs to the people of Tasmania and should be preserved for future generations. The reserve should not be used for private enterprise which is only interested in making money; this is privatization of a community asset,” said one respondent.

Principal architect Robert Morris-Nunn maintains that the development will be unobtrusive, both visually and environmentally.

“The proposed development sits below the roadway level, and for the most part, is completely screened off from it,” he wrote in a submission to the council planning officer. “The only structures even partly breaking the uninterrupted 180 degree views of the upper parkland will be the raked roof [of] the public restaurant (thereby creating an upper level kiosk at boardwalk level), fire stairs (which has to exit into open space) and further round the road towards the bridge, the single storey main entry of the hotel itself.

“The habitable levels of the development (60 suites) itself are directly below the boardwalk or planted roofs, and completely out of sight when viewed from the crown of the hill. The public viewing deck which is effectively the roof of the resort will allow completely unrestrained panoramic views for all members of the general public.”

The buildings will be visible from Hobart’s western shore, but the architects say the use of non-reflective glass throughout and naturally rusting Corten steel will help it to blend into the landscape.

In terms of environmental effects, Morris-Nunn said that through a partnership with environmental organiaation Greening Australia, the project would become “a real showpiece” for what’s possible in terms of restoration.

“[It will be] a dramatic public demonstration of how to sensitively restore the whole reserve within ecologically robust parameters, showing how a bushland area completely surrounded by the constraints of urban development can come alive,” he said. 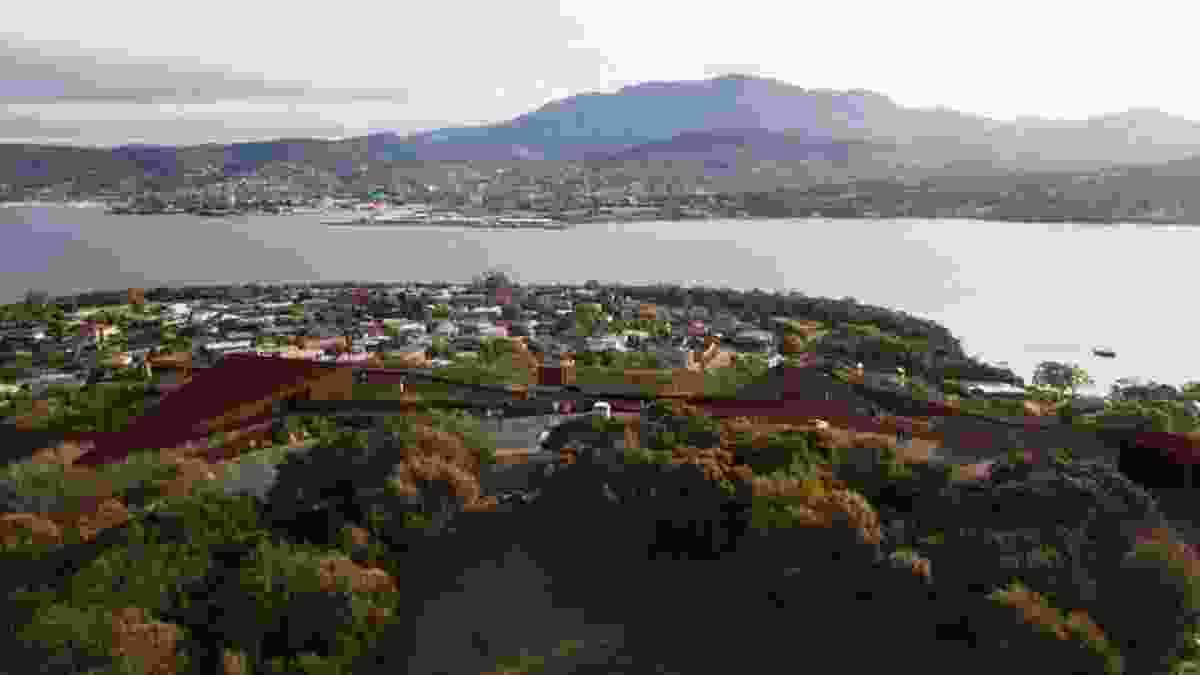 The development at Rosny Hill Recreation Area at Circa Morris-Nunn Architects.