An aerial view of a concept proposal for the Penguin parade visitor centre designed by Peter Eliott Architecture and Urban Design, as seen in the Summerland Peninsula Infrastructure & Procurement Master Plan (2012) by Tract Consultants.

The Daryl Jackson-designed building will be demolished as it sits on land that has been identified for penguin habitat. The new visitor centre will sited in the nearest non-penguin habitat area, 200 metres from the existing centre.

Terroir was appointed following a competitive tender process announced in May 2016. The practice will now commence an extensive consultative process with Phillip Island Nature Parks on the design of the visitor centre, which is based on initial concept designs by Peter Elliott Architecture and Urban Design.

Scott Balmforth, principal and director of Terroir said, “Our ambition is to strive to deliver […] an enhanced experience [that is] very much about a combined architecture landscape interpretive project.”

The visitor centre is key outcome of a 2012 masterplan for the Summerland Peninsula by Tract Consultants and will include a scientific and education institute, retail facilities, food and beverage facilities and interpretive opportunities to help people explore the island, said Balmforth.

The masterplan suggested the “design and siting of the visitor centre will demonstrate a site-specific response to climate where the building ‘shelters’ within the landscape and in turn provides shelter for visitors.” The visitor centre is also intended to be a leading scientific and educational institute and is expected to achieve a five-star Green Star design rating.

As well as the visitor centre, the development will restore 8.2 hectares of penguin habitat, with 6.7 hectares of habitat for the Little Penguin. This can accommodate up to 1,446 breeding penguins and 1.5 hectares would provide new wetland habitat.

The Victorian government provided $48.2 million for the development through the Regional Tourism Infrastructure Fund, while Phillip Island Nature Parks contributed $10 million to the project.

The Penguin Parade is a popular tourist destination in Victoria and the existing visitor centre receives more than 600,000 visitors per annum with the potential of increase more than 20 percent in the next 10 years.

Tract Consultants received a Planning Award at the 2014 Victorian Landscape Architecture Awards for its Summerland Peninsula Infrastructure and Procurement Masterplan.

Penguin Plus Viewing received an Award of Excellence in the tourism category at the 2016 Victorian Landscape Architecture Awards.

The new visitor centre is due to open in late 2019. 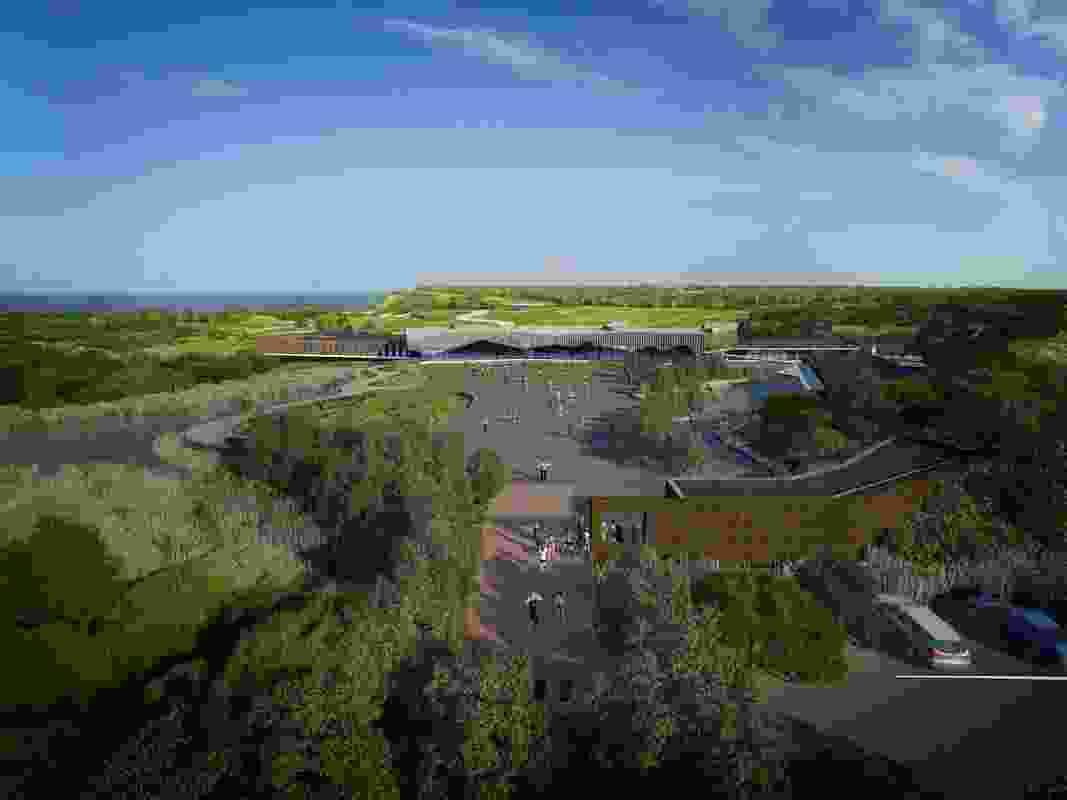 An aerial view of a concept proposal for the Penguin parade visitor centre designed by Peter Eliott Architecture and Urban Design, as seen in the Summerland Peninsula Infrastructure & Procurement Master Plan (2012) by Tract Consultants.