This clever new home, set on a narrow site in an inner-city suburb, is a light and airy place of retreat from the city while still enabling a connection with it.

A paired-back material palette is used throughout the home, including American oak, marble and white joinery.

One of the biggest drawcards of living close to the city is the convenient access to a broad range of amenities. A downside, however, is that privacy and space often need to be compromised on tight, inner-city blocks. But with the assistance of a clever architect, sightlines can be manipulated and every inch of space can be made to count. This is the case at Tess and JJ’s House by Po-co Architecture, located in a cul-de-sac in Melbourne’s South Yarra. The home is a calm retreat removed from city life, but still only a hop, skip and a jump from the action of Chapel Street.

The density across South Yarra is varied, with apartment blocks dotted throughout a sea of single dwellings. Tess and JJ’s House sits on an irregularly shaped block with worker’s cottages on either side. The design of the street elevation marks this as a new building, but very much in keeping with the surrounding houses. “In order to keep the rhythm of single-storey houses along the street, we created the illusion of an over-scaled single-storey house from the front and reinterpreted the typical single window and front door arrangement of its neighbours,” says Fiona Poon, director of Po-co Architecture.

Taller apartment blocks are located across the laneway at the rear of the site, which made privacy an issue. The angular form of the new home is a response to the angled site. It is pushed and pulled according to sightlines into the property and carved into to allow the southern neighbours continued access to light. At the time that their new house was being designed, clients Tess and Jonathan Joseph also owned the house to the north, meaning that boundary realignment was possible. The realignment meant that all aspects of the brief could be accommodated, including a small pool and backyard.

For Tess and her family the project was a five-year plan. “JJ [Jonathan] and I have two young children: Lachlan, who is six and a half years old, and Evie, who is four and a half. We enjoyed the opportunity to think about how a space would work specifically for our family.” With the requirement for an isolated space for Jonathan to work away from the children, Fiona designed a compact study at the front of the home that faces onto the leafy cul-de-sac and is also connected to the main bedroom suite. The upstairs zone is like a cubbyhouse for the children – the ceiling above the upstairs circulation space follows the roofline, which angles down to avoid overshadowing the neighbours. Upstairs is a flexible zone that can be used as two bedrooms or as one bedroom and a rumpus room that opens out onto the circulation via a large sliding door. A small angled and battened peephole at either end of the upper-level circulation space ensures that the children feel connected to what’s happening in the main living areas below and can see who’s coming and going through the front door.

Having lived abroad in London and Rome, Tess knew that copious amounts of space weren’t required for the home to function efficiently. A European-style laundry is tucked adjacent to the kitchen and storage is added wherever it will fit. Priority was given to providing the impression of space for the main living areas – the most impressive of these is the main kitchen/dining area, a double-height room with windows from floor to ceiling. This is a wonderful, light-filled space with views directed to treetops and battened screens for privacy and shading. The “wow factor,” as Tess calls it, is amplified through the transition from the dark, compressed hallway that leads from the front door into the naturally lit, airy room. There is a feeling that you are slightly removed from the tightly packed inner-city suburb. With large sliding glass doors opening onto a north-facing deck to expand the floor area and a compact bar at the end of the kitchen, the space is perfect for entertaining. “During this period of your lives with young children, you don’t go out to socialize as much. So we wanted this home to allow us to entertain,” says Tess.

A north-facing lounge area connects to the double-height volume and, in comparison, is a cosier, more contained space. The small garden features established birch trees that allow sun in during winter and provide shade in summer. The eastern wall is solid to provide privacy from the apartment blocks to the rear of the site, other than a single fixed window at floor level, which gives a view of the pool and the movement of reflected light across the water.

Fiona was pregnant with her first child during the design process, so Tess managed the project once construction started and along with the builder, Christian McCalman of Build2, carried it through to completion. “It was a winning team, particularly with my commitments at the time,” Fiona recalls. “I wasn’t as heavily involved in the construction process as I normally would be, but Christian respected the design intent and checked in with me along the way.”

The success of Tess and JJ’s House doesn’t rely on an impressive coastal view or heroic architectural move. Instead, clever manipulation of space and light has allowed the narrow urban site to feel much larger than it is, and more private than might otherwise have been possible in the dense setting. The dwelling offers a lovely place of retreat from the city while still enabling a connection with it.

Bathroom
Porcelain tiles from Perini Tiles; tapware and fixtures from Centre Plumbing Plus. 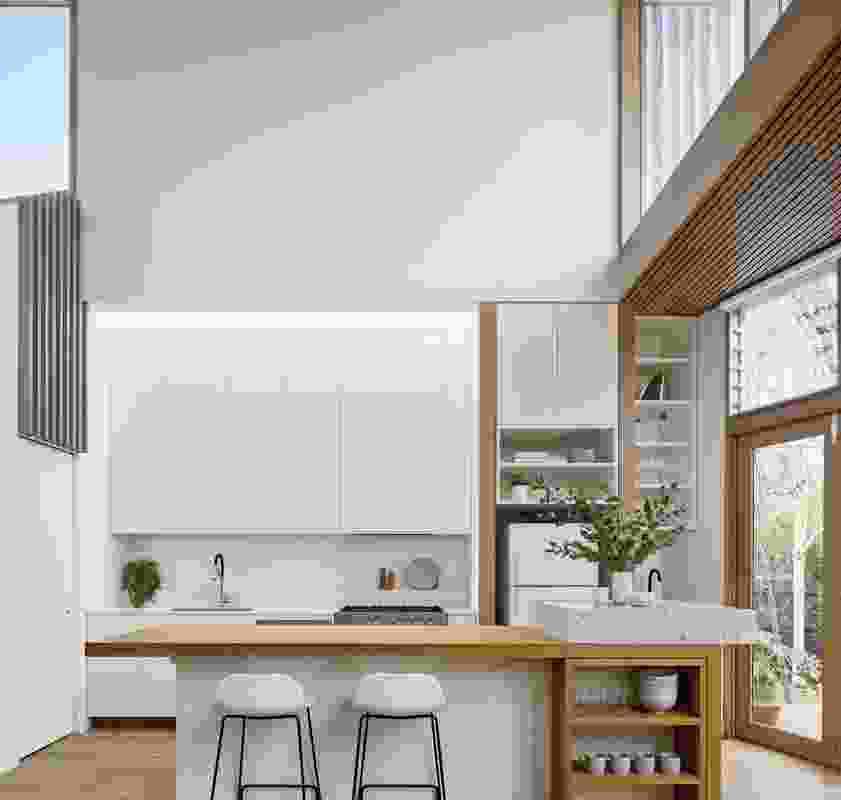 A paired-back material palette is used throughout the home, including American oak, marble and white joinery. 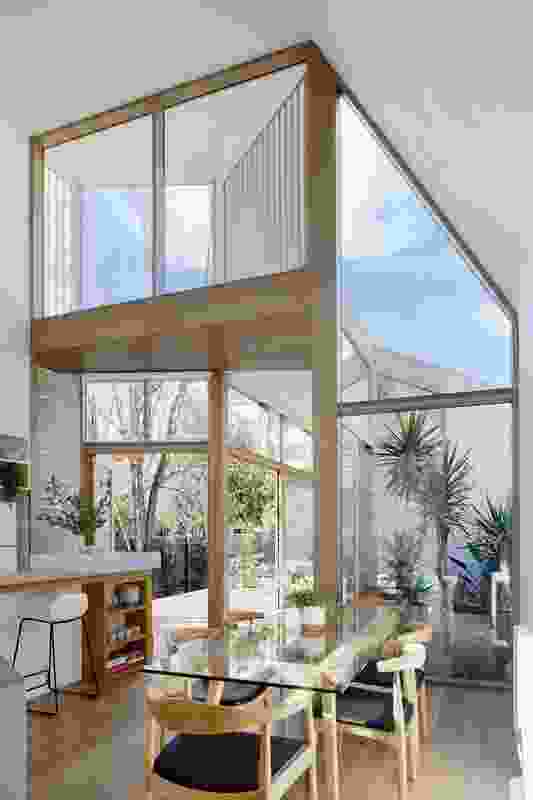 The kitchen/dining area is an impressive double-height volume, with views directed to treetops and battened screens for privacy and shading. 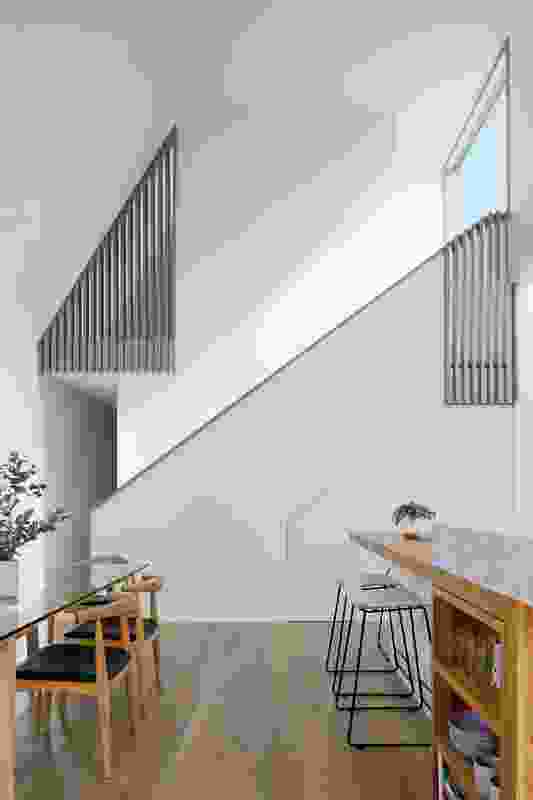 The upstairs zone is like a cubbyhouse for the children, with small angled and battened peepholes. 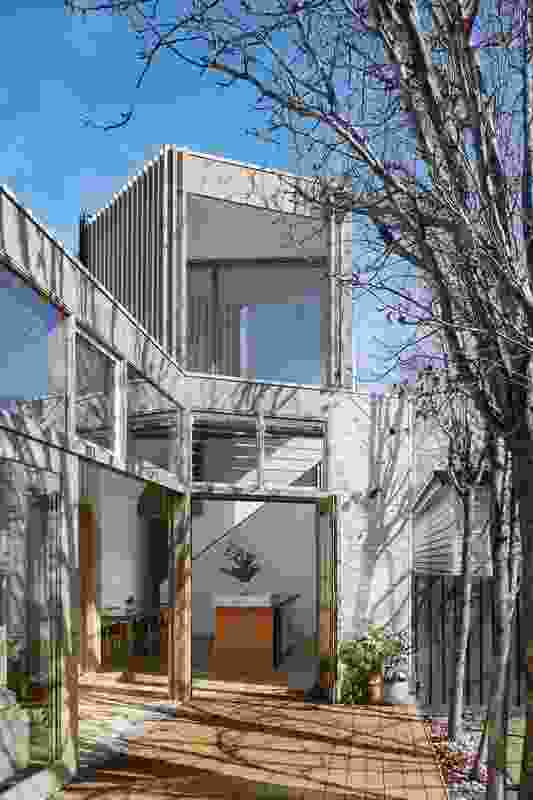 With large sliding glass doors opening onto a deck and a bar at the end of the kitchen, the space is designed for entertaining. 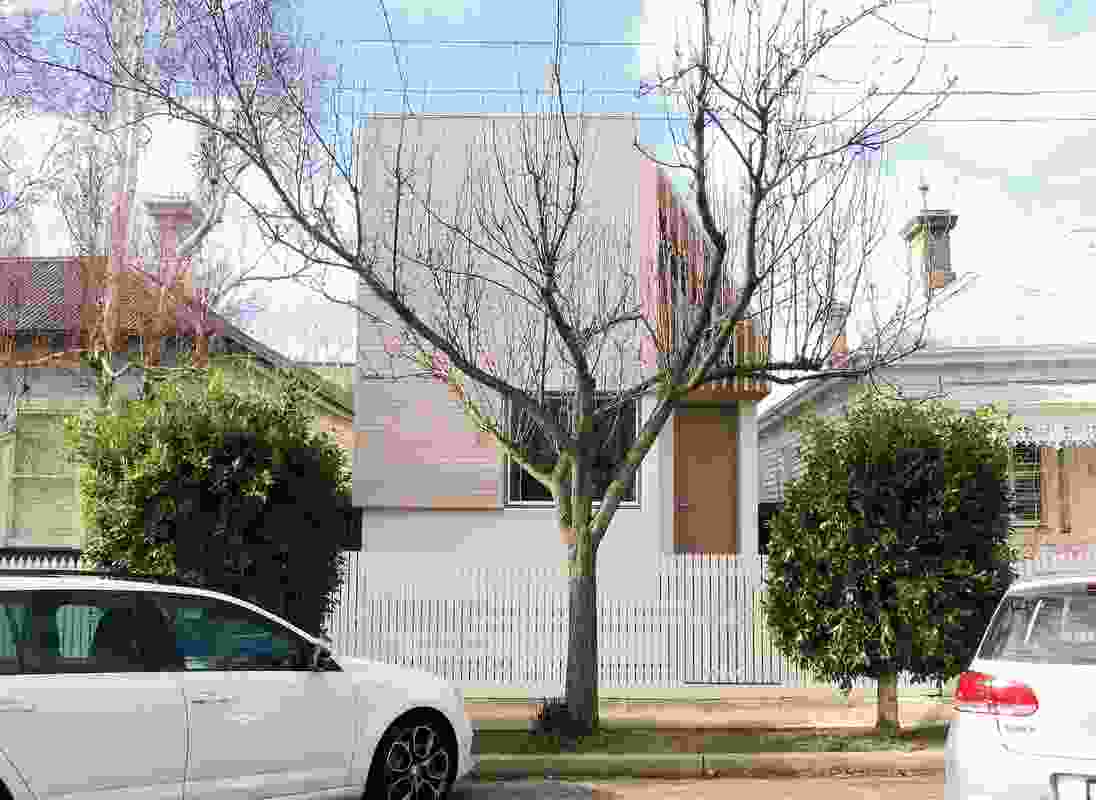 The design of the street elevation marks this as a new building, but it is still in keeping with the surrounding houses. 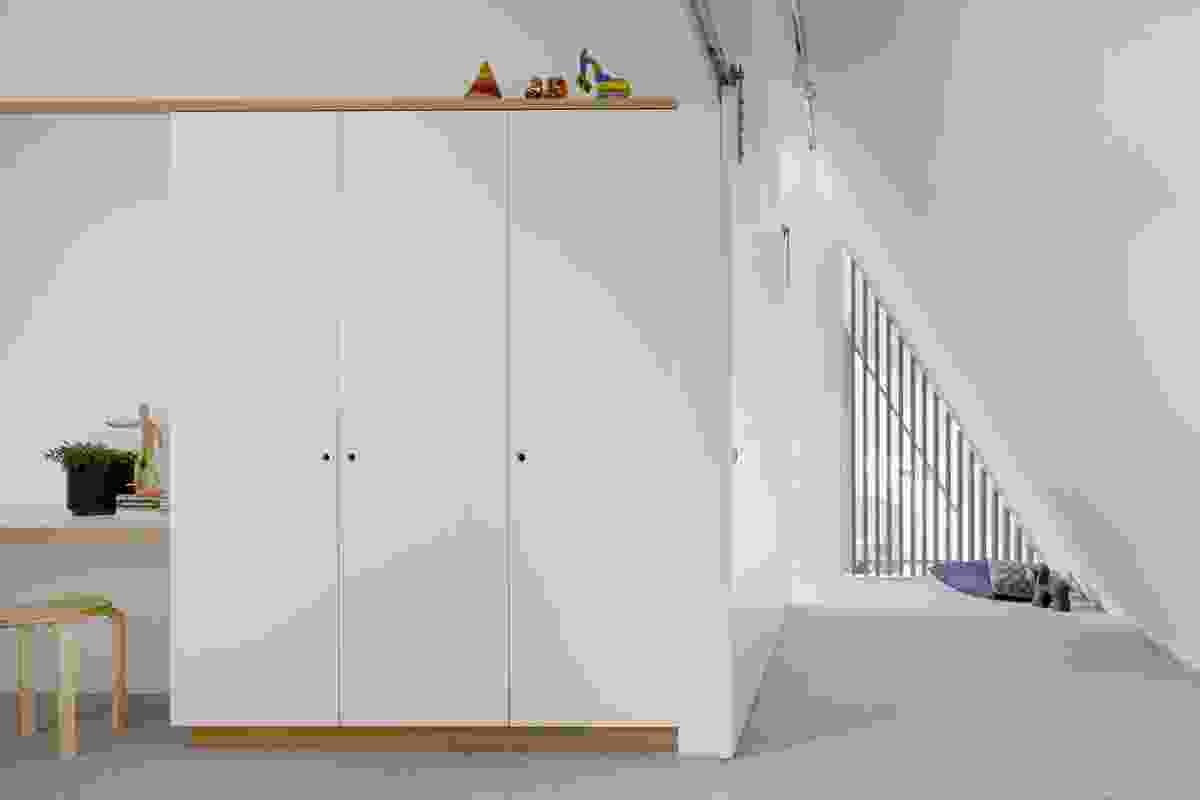 The upper level is a flexible zone, with one of two bedrooms opening out onto the circulation via a large sliding door.