A new plant conservation laboratory built within the Australian Botanic Garden in Mount Annan presents long-awaited and much-needed infrastructure that is critical to the urgent task of banking Australia’s diverse flora.

The Australian PlantBank is a remarkable new plant conservation laboratory at The Australian Botanic Garden in Mount Annan. It is part of an international network of scientific institutions seeking to preserve global plant biodiversity. The renewal of the institution involves the presentation of a coherent unified and accessible view of conservation science to visitors. The centre presents long-awaited and much-needed infrastructure that is critical to the urgent task of banking Australia’s diverse flora, which is increasingly under pressure. Today PlantBank stores 20 percent of Australia’s flora.

The new gardens of PlantBank are part of this communicative project. The gardens aim to break down the inscrutable character of the Australian bush and render it legible, using the design device of abstraction. The material compositions of the gardens achieve this through the artful composition of materials, plant species and a close collaboration between landscape architects and botanists. The task, to make visible that which has been largely invisible, is urgent because ecosystems such as Sydney’s Cumberland Plain Woodland verge on extinction.

Artists such as John Olsen, Fred Williams and Arthur Boyd capture the impenetrability of the Australian bush through repetitious abstractions that form an opaque textured screen without depth. The flattening of perspective creates a sense of timelessness in their artwork. Such timelessness is less a feeling of eternity; more the terror of the perpetual present; a sense of being without time leavened occasionally by an eccentric character thrown into the tableau like a lost angel. Such artworks are useful metaphors for the Cumberland Plain Woodland association, the original vegetation community of large areas of Western Sydney, which has been overlooked, undervalued and extensively cleared in the nineteenth and twentieth centuries. It is only recently that we are coming to understand the evolution of this rare plant community, of which only 6 percent remains.

There have been five great mass extinctions in the earth’s history and there are those who suggest we are well on the way towards a sixth, the latest engineered by the forces of climate change and large-scale environmental degradation. Up until the 1800s, the concept of extinction didn’t even exist and when such ideas did emerge they posed an affront to social and religious viewpoints. Since the Renaissance, the role of gardens has been to extend the influence and power of humanity and demonstrate mastery over the landscape. Now with the prospect of biodiversity loss and extinction on every horizon, the contemporary garden must negotiate the limits and pervasiveness of human influence on and within nature by manifesting new aesthetic and scientific imperatives.

The PlantBank at Mount Annan is an agent of ecological preservation in the context of the daunting changes first envisaged by Cuvier and so evident now.

It took a French naturalist by the name of Georges Cuvier to challenge the theory of perpetuity and suggest that species were thrown into shock, and ultimately extinction, by severe changes in their environment. However, Darwin’s theory of evolution discredited Cuvier’s theories and it took until as recently as the 1980s and ’90s for a general consensus to transpire that such catastrophes existed and were possible alongside Darwin’s own theories. The PlantBank at Mount Annan is an agent of ecological preservation in the context of the daunting changes first envisaged by Cuvier and so evident now. The complex is approached through neighbouring suburbs of detached houses built on landscapes cleared of Cumberland Plain Woodland. Once you enter the botanic gardens themselves you pass through several patches of remnant Cumberland Plain Woodland and river-flat eucalypt forest.

Like other contemporary seed banks, PlantBank itself first appears as a monolithic bunker, mute and prismatic in a natural landscape. Perhaps the most iconic of these is the foreboding Svalbard Global Seed Vault, which is set in the ice-covered Norwegian island of Spitsbergen. Designed to survive apocalyptic events, Svalbard is financed by Bill Gates, amongst others. Permafrost keeps this vault below freezing and the seeds are further protected by metre-thick concrete walls. The Millennium Seed Bank Project, part of Kew Royal Botanic Gardens and located at Wakehurst, near London is the largest seed bank in the world, providing storage for billions of seeds in a vast bomb-proof underground vault. It aims to store every plant species possible. It has to date stored 13 percent of the world’s wild plant species and its goal is to store 25 percent by 2020.

[The Plantbank’s] mission is to preserve the biological diversity of the flora endemic to Australia and it is lucky enough to be situated amongst some of the very species it seeks to save.

However, PlantBank differs from these in various ways. Its mission is to preserve the biological diversity of the flora endemic to Australia and it is lucky enough to be situated amongst some of the very species it seeks to save. The building is organized as two spliced volumes, with the main entrance accessed from below. Seemingly impervious to outside influence, the solid building is filled with light and fresh air through sophisticated fenestration systems and attuned to its surrounding climate.

Unlike a financial bank, PlantBank is designed to stop its currency from growing. A range of techniques to arrest biological processes are used so that seeds and tissues can be preserved in a “grow ready” state for longer. Ordinarily, as soon as a seed is collected it is subject to humidity, heat, predators and a range of other natural processes that cause deterioration. Here the bank deprives the seeds and plant material of these threats to preserve them for as long as possible. Seeds are retested every ten years and, based on the success of the germination rates, storage techniques are adapted to improve the success next time.

There are three new gardens in this landscape: the courtyard gardens set within the curving forms of the new institutional building by BVN, the bushland transition “meadow gardens,” and the surrounding Cumberland Plain Woodland itself. The lead landscape architecture practice for the project, 360 Degrees Landscape Architects, describes the plantings in the courtyard as an abstracted representation of the woodland association. The elements of the bush are reconfigured in artful combinations set within geometric beds that scissor their way off into the surrounding topography, triangular geometries and concrete walls retaining the embedded rocky shale gradient. The garden is designed to present an intermediate level of abstraction between the surrounding ecosystem of the Cumberland Plain Woodland association and the Linnaean abstraction of the PlantBank storage facilities.

The courtyard garden, as with the other gardens associated with PlantBank, represents a collaborative effort by 360 Degrees Landscape Architects and the horticultural and botanical specialists at The Australian Botanic Garden. Such collaboration between landscape architects, adept at the geometries and generation of strong aesthetic and spatial designs, and botanists, conversant with unfamiliar species and their biology, represents a rare and valuable dimension to the project. Innovative biological mulches, made up of Themeda sp seed heads, feature in some of the planting beds, while in others humble grasses and shrubs plucked from their ecological context are given new aesthetic and functional significance. The materials (biological mulches, mineral mulches, maintained “wild” flowers) and their geometric arrangement offer much food for thought. There are even plans to introduce back-burning into several of the beds to demonstrate other bushland processes. Highlighting the modest plants of the woodland is one way to emphasize the importance of the complex biological diversity that exists within such ecosystems. This approach contrasts with the featuring of “hero” species in other areas of The Australian Botanic Garden. The PlantBank gardens provide a refreshing antidote to such featurism and a direct link to the ecosystems that occur just beyond the footprint of the new institute. The gardens’ very specificity reminds us that science doesn’t yet know which link in the ecological web will prove to be the most critical in the long term. The biologically impoverished gardens and agricultural landscapes usually cultivated in our metropolitan settings must change if we are to address rapid biodiversity loss. This garden is a test-bed for how that might happen.

The difficulty of replicating ecosystems such as the Cumberland Plain Woodland is demonstrated by the initial growth patterns of the “woodland creep” or “edge” meadow gardens designed to blend with the surroundings. These edge gardens or meadow landscapes are currently in a trial stage with several plant species failing and emphasizing the need for continued experimentation. Although the more formal courtyard landscapes would be expected to require more energy and maintenance, it is actually the meadow landscapes that require the most at this early stage. Within the courtyard, growth cycles and maintenance can be interpreted and resolved by focusing on the relatively predictable variables that the mass plantings of single species require. However, in the meadow garden, the variety and interactions of the species, the patchiness of their distributions and the predation of wallabies and kangaroos set up a complex web of selection processes that require more intensive adjustment of maintenance regimes. It is very difficult to design a multi-species association and replicate the “dynamic stability” of a natural ecosystem. Ironically, the more “naturalistic” system with the greater number of species requires more work until a lower energy maintenance regime and species association evolves.

The success of such complex gardens is imperative. The ability to cultivate ecosystems artificially and on a massive scale may determine the ultimate survival of some species. Daniel Baffsky, principal of 360 Degrees Landscape Architects, believes that the garden is a neglected but important type within the landscape architects’ oeuvre. In their design work, landscape architects engage with a very small proportion of the landscape scales that typify global landscapes. The distance between the scale of a park and what would usually be considered a garden is inconsequential in his eyes and he sees the design experiments of the great European gardens and landscapes as demonstrating the elasticity of scales between a “park” and a “garden.” He considers that professional understanding of this was lost in the twentieth century. To Baffsky, a park within a city is as much a garden as the landscapes that make up regional biomes. Both are the product of specific management regimes, human interference and intervention. The garden provides an excellent test-bed for experimentation with biological variables in combination with spatial and aesthetic practices. 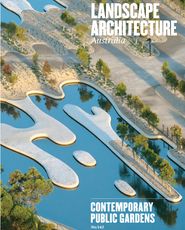 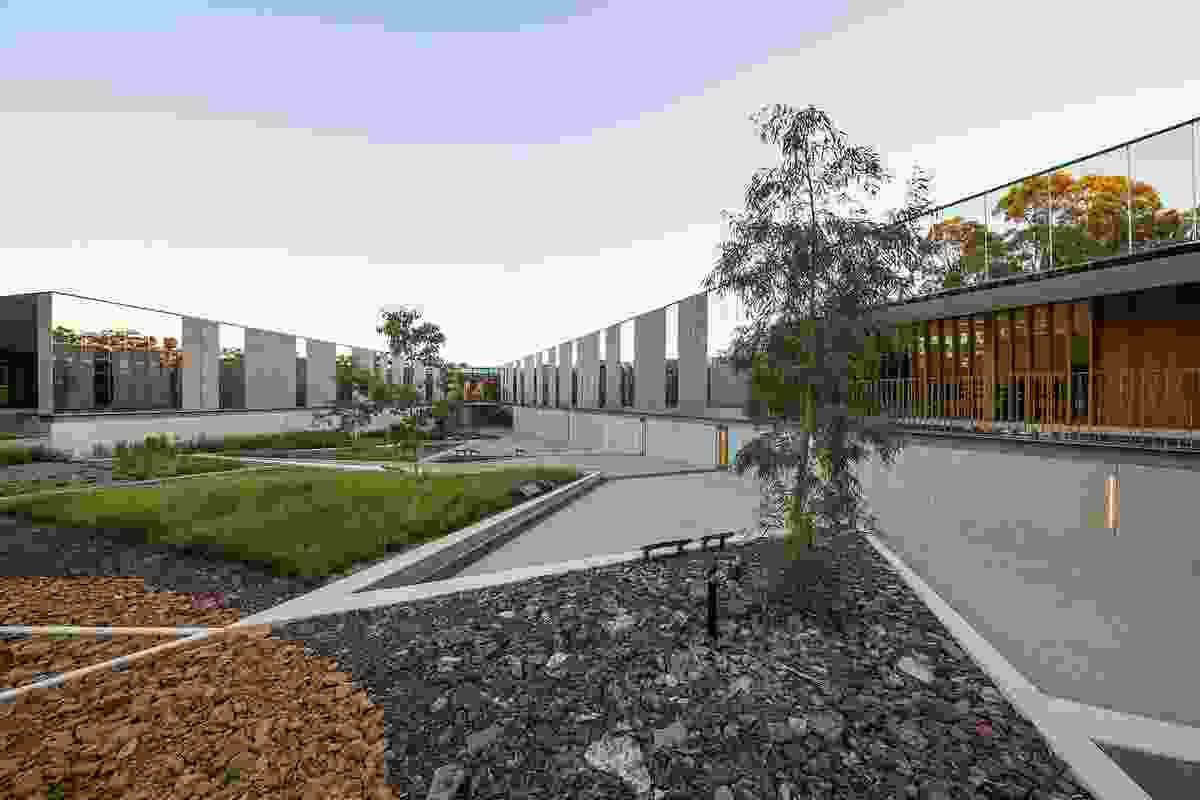 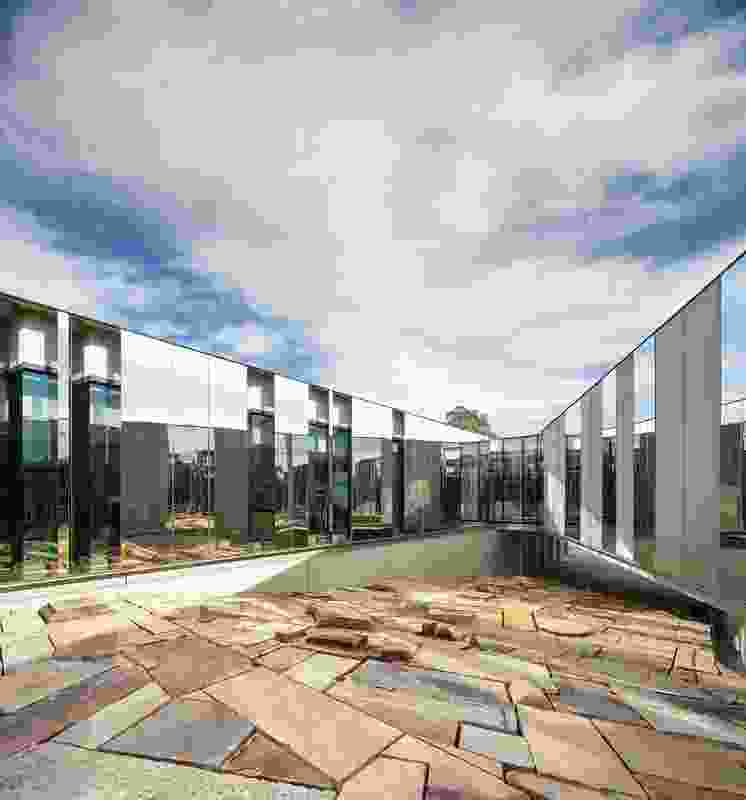 Recycled sandstone provides the foundations of a “lichen garden.” 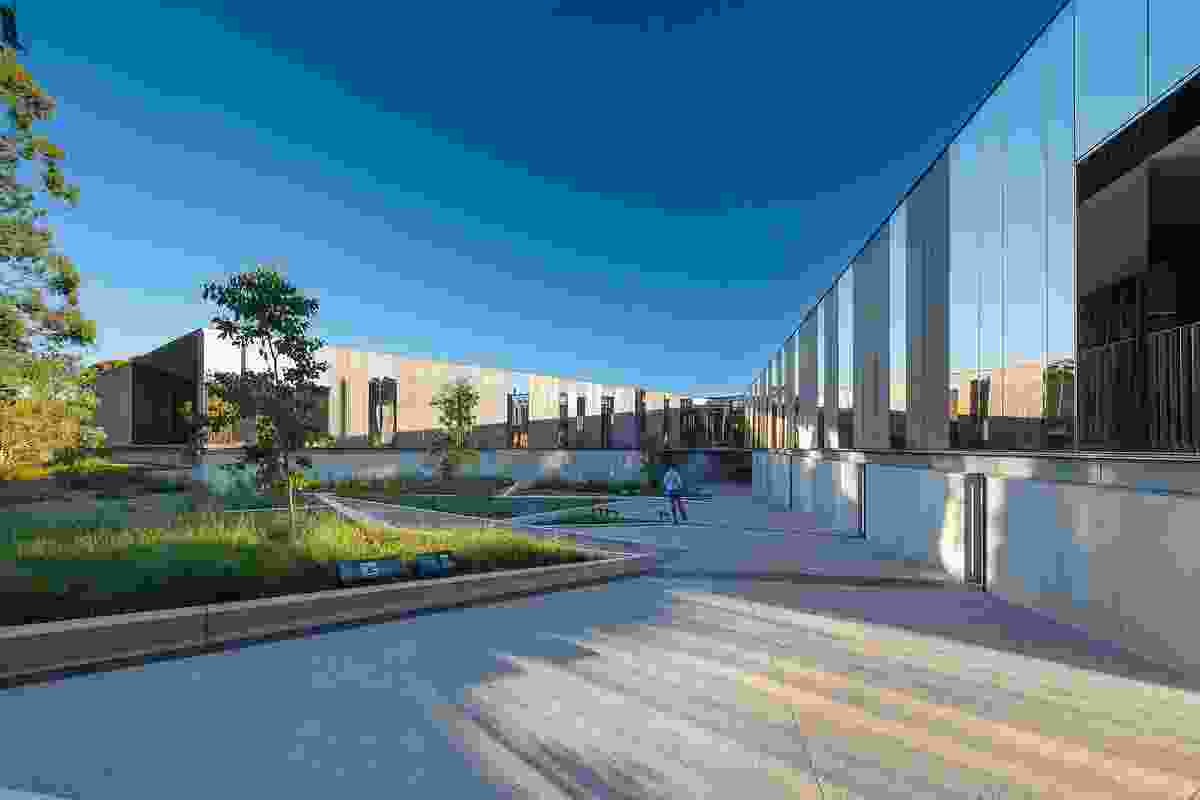 The garden contrasts sharply against the sweeping forms of the PlantBank building designed by BVN. 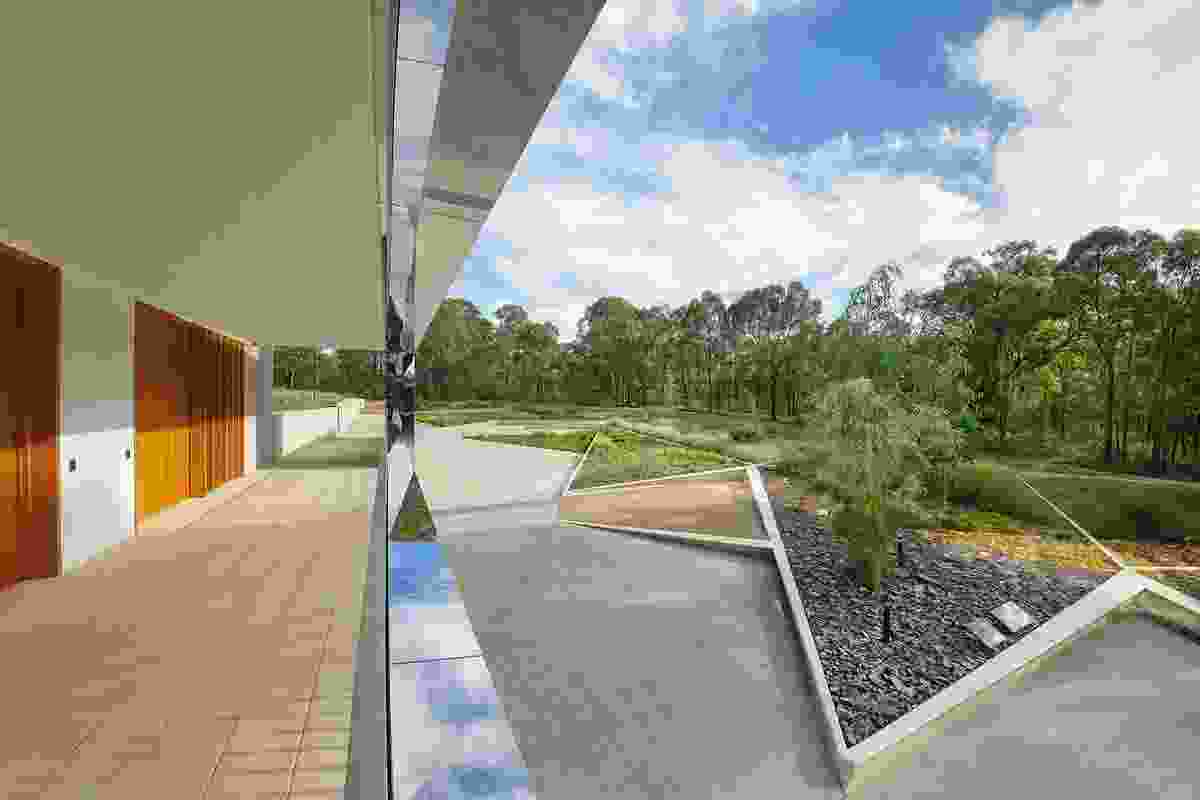 The abstracted woodland garden triangulates into the less structured woodland creep zone behind. 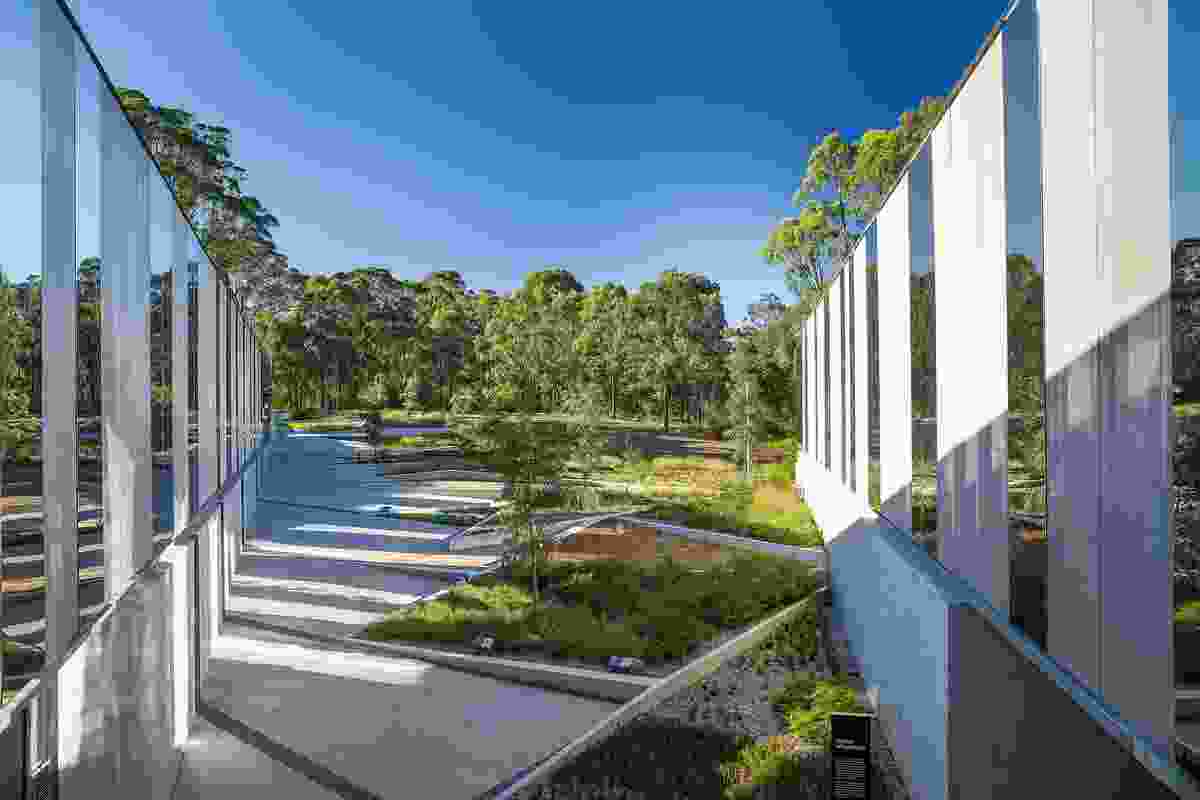 Light and shadows are refracted by the building’s reflective planes, augmenting the garden’s complex geometries. 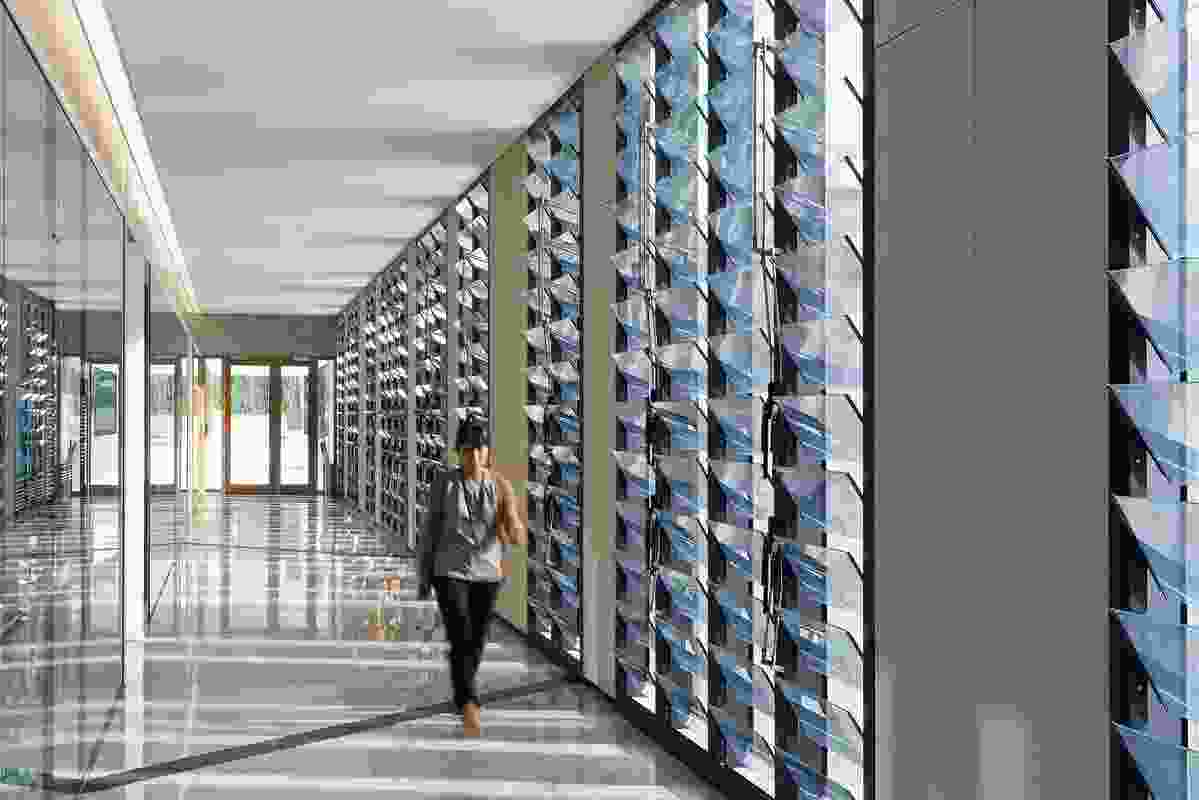 Louvre windows along the circulation corridors provide a strong connection to the building’s garden setting. 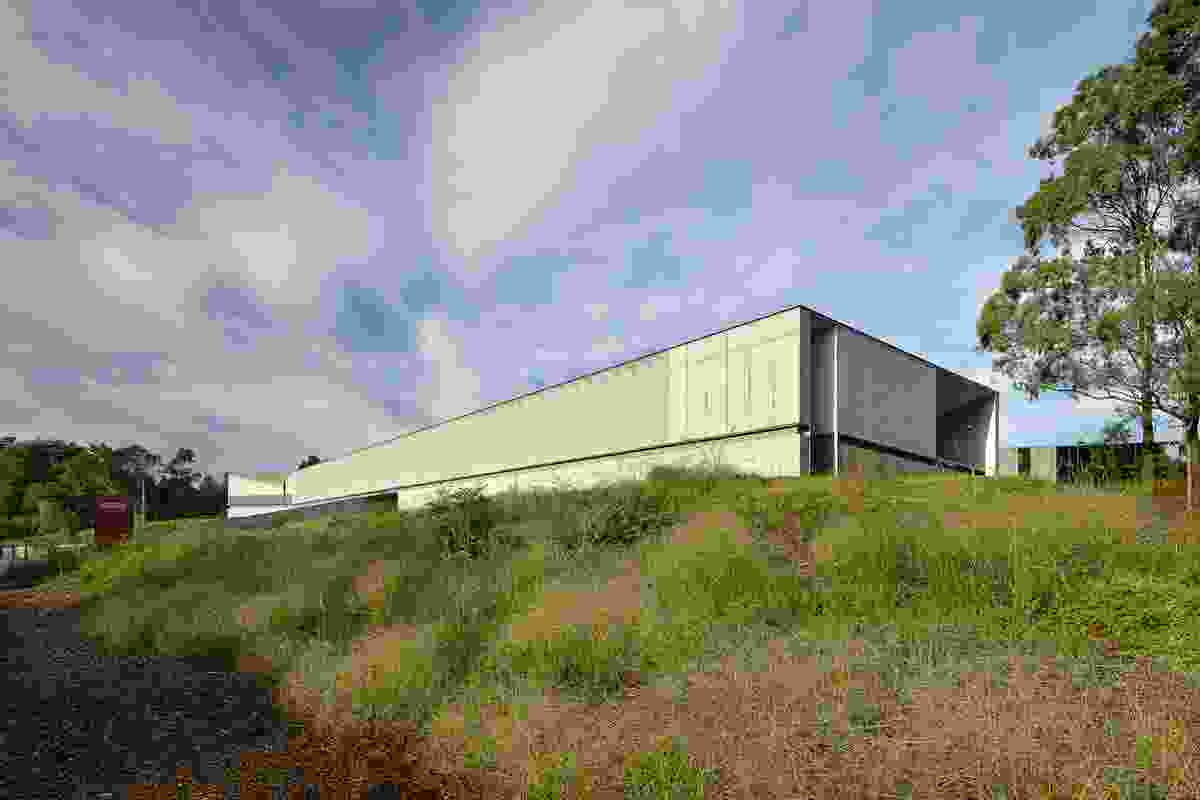 The PlantBank building first appears as a monolithic bunker in a natural landscape. 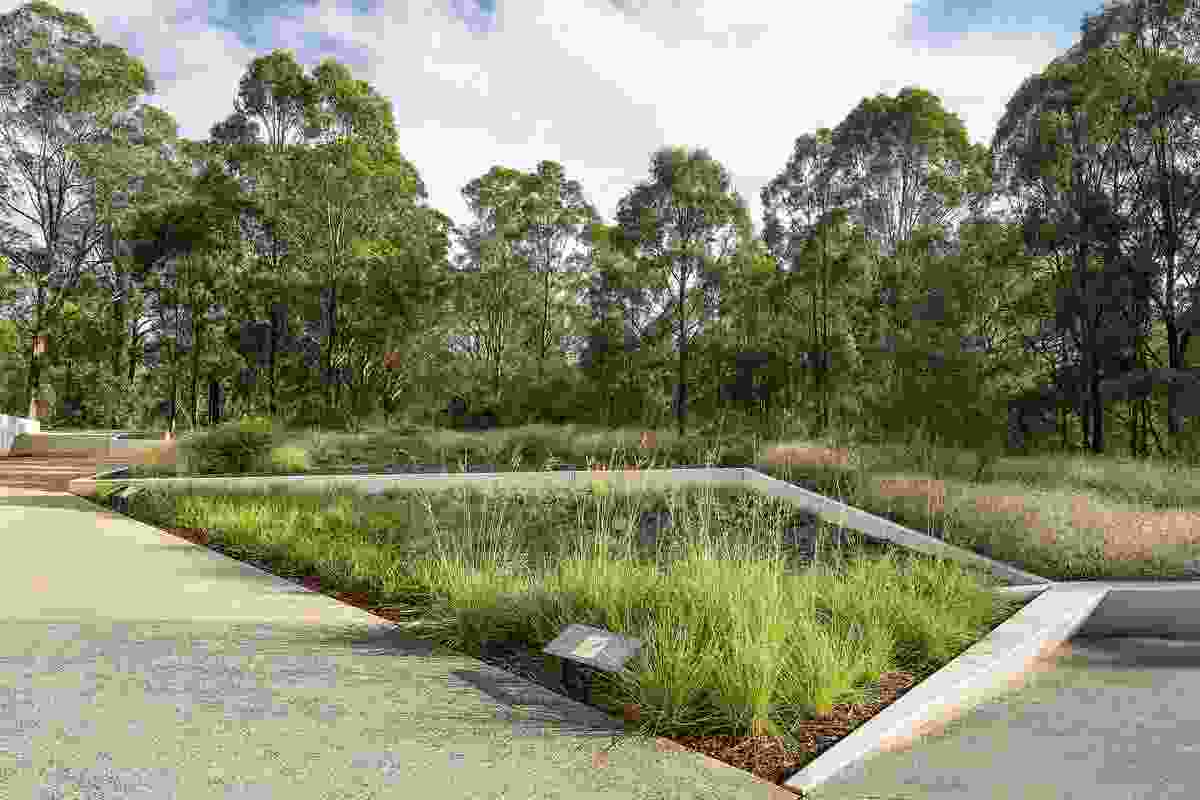