The burglar as architectural critic?

Naomi Stead reviews a new book by BLDGBLOG author Geoff Manaugh which examines how the unique viewpoint of burglars enables a new understanding of the city and its buildings, from the dark side.

A new book by BLDGBLOG author Geoff Manaugh asserts that burglary is a form of architectural criticism.

What occupation would be opposite to that of an architect? The answer might seem easy: a demolisher, someone who knocks buildings down. But there is another possibility: what if the opposite of an architect was a burglar?

If architects work to create a sense of safe enclosure, a managed separation between a protected interior realm and the threats of the wider world, a sense of redoubt, homeliness, security (in both its psychological and practical senses), then it is precisely this feeling of refuge that is breached by a burglar’s invasion.

I’ve been thinking of such things in relation to a new book by Geoff Manaugh, A Burglar’s Guide to the City (2016). Manaugh is most well known as founder and author of BLDGBLOG (read: Building Blog), one of the most popular and well subscribed (and also fabulously interesting and well-written) blogs around that address the built environment.

I say it’s about the built environment, rather than architecture per se, because BLDGBLOG describes itself as being about “Architectural Conjecture, Urban Speculation, and Landscape Futures”.

Unlike more conventional architectural blogs, it’s much less likely to be about a new building by a famous architect, than it is to be about

The blog is fascinating partly because of these highly eclectic interests held by the author himself – it’s part futurism, part gadgety techno-utopianism, part gee-whiz boyish enthusiasm for cool ideas and things and people. It thus looks at buildings (amongst other things) in an unexpected light, from an unexpected direction, and this is also true of Manaugh’s new book.

The premise of the book is that burglars, even if they use their knowledge to nefarious ends, have an intimate understanding of buildings and the city. In this conception, burglary is a form of architectural criticism: using architecture against the intentions of its inhabitants (and its architects), but using it nevertheless. Examining the unique viewpoint of burglars enables a new understanding of the city and its buildings, from the dark side.

This approach is not entirely new. There’s a celebrated strand of avant garde urban theory which examines the creative misuse of the city by particular citizens: skateboarders for example, or parkour devotees, or, historically, members of the Situationist International, roaming through the streets in the deliberately aimless practice of dérive, or drifting.

… burglary is a form of architectural criticism: using architecture against the intentions of its inhabitants (and its architects), but using it nevertheless.

Architectural culture has long had a fascination with such alternative, subversive, views of the city. Working to different rhythms and different ends, “city hackers” in all their various guises can be seen as resisting capitalist patterns of work and consumption, “playing” with buildings and urban space, looking askance at architecture. Manaugh clearly sees burglars as part of this lineage.

The book covers some fascinating territory. Manaugh opens with the story of George Leonidas Leslie who, trained as an architect, used his knowledge to undertake a spectacular crime spree in the New York of the 1860s-70s. Using his architectural skills, as well as his access to the wealthy echelons of society and equally to the tradies who would become part of his gang, Leslie was, Manaugh argues,“the greatest burglar of the nineteenth century.”

This opens Manaugh’s premise: that Leslie can be seen as “both burglary’s patron saint and architecture’s fallen superhero.” Speculating that for Leslie, “the best way to commune with an architectural space was by breaking into it,” Manaugh finds that:

his darkest accomplishment […] was hardwiring crime into architectural history, making burglary a necessary theme in any complete discussion of the city. Burglary is the original sin of the metropolis. Indeed, you cannot tell the story of buildings without telling the story of the people who want to break into them: burglars are a necessary part of the tale, a deviant counternarrative as old as the built environment itself.

So far, so interesting – and it is indeed a very intriguing book: well researched, lively in its prose and observations, original in conception.

Manaugh recounts with glee the use of “capture houses” in the UK and US – fakes set up by the police with the express purpose of attracting and trapping burglars. He goes up on helicopter patrol with the LAPD and uses this as an entrée to write about how particular urban form and infrastructure works to enable, or disenable, particular kinds of crime.

He interviews retired cat burglars and jewel thieves and expert lock-pickers, discusses the FBI’s own methods of covert break and enter, sets out the characteristics that leave your house more or less likely to be burgled (it’s good to be on a cul de sac, it’s not good to be on a corner, or set back, or with extensive shrubbery and tree coverage).

Manaugh argues, burglary “requires architecture – without an inside and an outside, there is no such thing as burglary.”

Throughout, there is a sense of the burgler as (anti)hero: a “magical and otherworldly” figure of ingenuity and flair. There are (admiring) accounts of “crime of the century” heists, thrilling capers, the cracking of seemingly uncrackable safes and vaults.

Manaugh researches crime in Imperial Rome, and makes lengthy discussions of the legal definition of a “building”.

This last point turns out to be crucial, since the legal definition of burglary hinges upon unauthorized entry to a structure. In this sense, as Manaugh argues, burglary “requires architecture – without an inside and an outside, there is no such thing as burglary. There is larceny – even petty theft, robbery, or vandalism – but burglary is a crime only possible in a world that has legally recognized walls and ceilings.”

It turns out that burglary depends on architecture. But can architecture learn from burglary? Well, despite the book being a cracker of a read, as I proceeded I began to feel more and more uneasy, about this and other questions.

My own entanglements with burglars have been mercifully few (touch wood). Nevertheless I will never forget the time when, staying at the inner-Sydney terrace house of a past paramour, we remained fast asleep as a burglar shimmied up the exterior wall and onto the first floor balcony, ghosted through the French doors into the bedroom, passed close by the bed nicking my watch from the night stand, disconnected a laptop in the next room, wafted downstairs with it, took the car keys from the kitchen bench, unlocked the front door from the inside, loaded everything including the TV into the car, which was parked outside, and drove off, all without us stirring.

The idea of him (I’m going to assume it was a him) standing there watching us as we slept was much worse, and much more disturbing, than the loss of my much-loved watch. Many people have far more horrendous stories, of lives blighted by intruders. Anyway, the point is that burglary is always a profound violation, and that makes Manaugh’s lionization of burglars – as ingenious technicians, figures of romantic derring-do, as celebrated characters in the popular imagination – harder and harder to take.

The flaw of the book is thus that it revels in the idea of the burglar: as a kind of gleeful trickster in some exciting but benign narrative, a mischievous Harry Houdini-type bandit, or a suave and swashbuckling George Clooney figure in a blockbuster heist movie. It makes burglary into a fun thought-experiment for considering buildings in a new way.

This begins to stick in the craw, as the book progresses. Burglary is, after all, rarely a victimless crime. And unlike burglars, all those other city hackers – the skateboarders and parkouristes and other urban “others” – are not doing anyone any harm.

There is an insult in pondering and enjoying an idea (any idea) in the abstract, when the concrete reality is quite different, and indeed very traumatic, for many people, especially those with no choice but to live in a high crime area. The book here strays dangerously close to a blithe and uncaring form of intellectual privilege.

Ultimately, Manaugh himself (almost) comes to the same conclusion – offering a weak kind of mea culpa at the end of the book. He holds onto the longing, though: “if only [burglars] really were the heroic explorers that this book seems so badly to want them to be.”

But they’re not, of course – no matter how many heist movies you watch, how many perfect getaways you plan, how much pleasure you take in the tricks of the architectural underdog. The fictional construction does not excuse the immorality of the crime. And revelling in that crime, as the book does, equally strays into dangerous moral territory.

So. Read this book, it’s very interesting, but be warned: it may well leave you queasy.

The burglar as architectural critic? 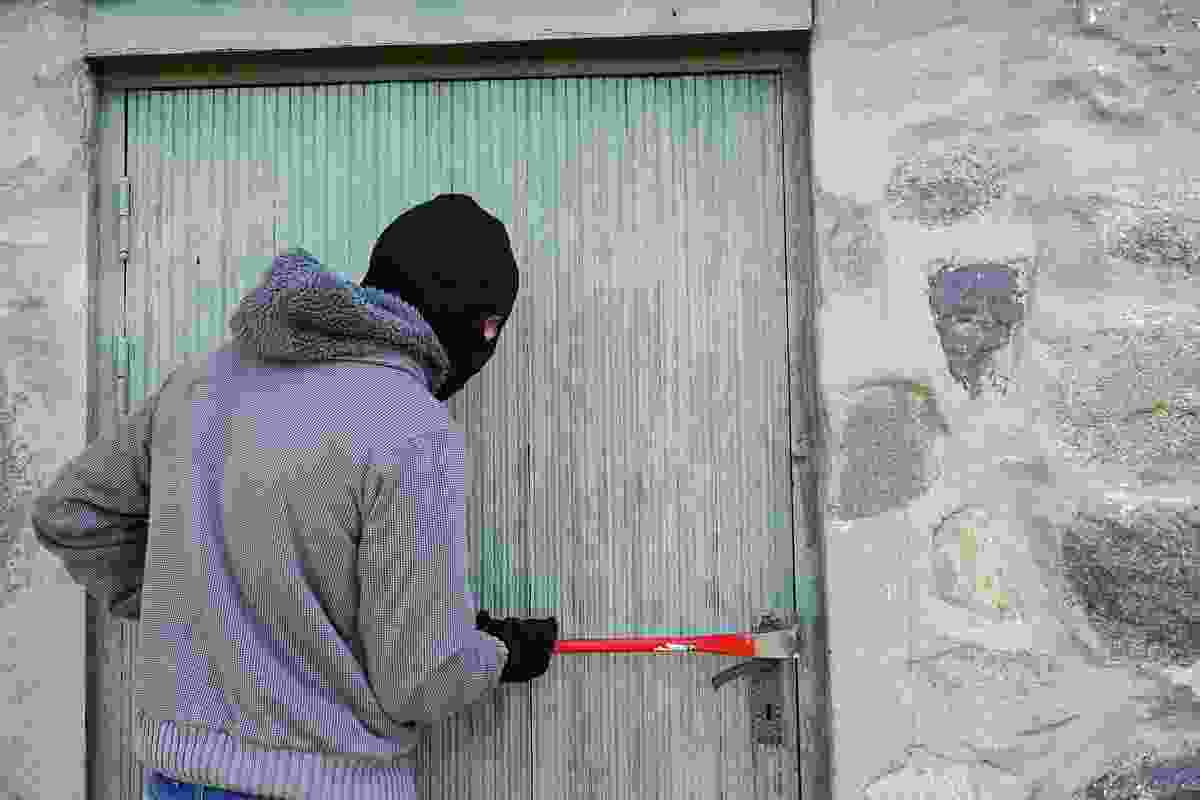 A new book by BLDGBLOG author Geoff Manaugh asserts that burglary is a form of architectural criticism.