Designed by Collins and Turner in collaboration with Baber Studio and D’Occhio, this brewhouse in South Brisbane tells the story of convict-turned-brewer James Squire through its base design and material palette.

Amber-toned glass is used as feature walling to the keg room, and as lighting panel backdrops in the bar areas.

Who could resist a charming squire? Nudge nudge. The latest iteration of a series of brewery bars under the James Squire label enjoys a pivotal spot in Brisbane’s busy South Bank precinct. The squire from whom the nomenclature is so cleverly derived is purportedly our country’s first brewer of hops and an ex-convict-made-good to boot.

While the name may have a louche and antique ring to it, the branding has been carefully considered to avoid historical pastiche or saccharine nostalgia. By all records Squire, who arrived with the First Fleet, was a thief, an adulterer and a bigamist, later becoming a successful businessman and rising to a position of social significance in the new colony. It is nothing new to Australian culture to put the rogue on a pedestal (even the word rogue carries with it a sense of forgiveness and latitude), and James Squire, owned by Lion, has turned the habit into an art form. Other “rogues” portrayed on the brewery website are charming and charismatic, artistic, brilliant and entrepreneurial, with the likes of artist Damien Hirst lending their shine to the memory of James.

The carefully produced evocation of this decidedly masculine and sometimes roughhouse world of devil-may-care bolters and loveable scoundrels is cleverly reflected in both the base design and material palette selected by Collins and Turner in collaboration with Baber Studio and D’Occhio. In 2012, Lion ran a design competition for the rollout of a series of James Squire bars across the country. Collins and Turner was awarded the task to develop concepts that could apply to any of the future sites for the group, with the first two sites embracing an old pub in Melbourne and a new venue in Newcastle. The much larger scale of the Brisbane venue attracted the attention of the Mantle Group, which decided to include a restaurant and other facilities, and brought on Baber Studio and D’Occhio to collaborate with Collins and Turner on the project.

The enormous scale of the 1500-square-metre site provided opportunities as well as challenges. The space sits on the ground level of Cox Rayner Architects’ 2012 extension to the Brisbane Convention and Exhibition Centre on Grey Street, the main boulevard connecting the CBD to the southern suburbs. The popular playgrounds of South Bank Parklands and the parallel Little Stanley Street are tucked between the boulevard and the river, and have always offered a delightfully pedestrian scale. Grey Street, on the other hand, has until recently struggled to lift itself from the status of a string of corporate offices, hotels and monolithic facades lined by narrow, shaded footpaths with fewer concessions to a lively street life.

The design teams wanted to activate this section of Grey Street, and their design positively connects inside and outside spaces and encourages passersby to be part of the ebb and flow. A pop-out kitchen window puts the chefs on display for food voyeurs, and a booth-like bar nestled next to the historic South Brisbane railway station at the pointy end of the complex is an equally inviting proposition for plein-air tapas or drinks.

The area was initially intended for four separate tenancies. After slicing a portal through one concrete dividing wall to affect the flow-on of all the spaces, the four sections became connected but can each cater to a different crowd and purpose. A double-height restaurant sits between the show pony kitchen and voluminous main beer hall and brewery, while at the opposite end a cosy, timber-lined volume (recalling perhaps the galley of the ship Squire sailed in, say the architects) with intimate lighting and seating creates a quieter mood. A private function room mezzanine space spills onto a verandah, overlooking broad decks below. The verandah spaces are slightly elevated from the public footpath, with a wall of greenery fast encroaching. At peak times, the seventy-metre stroll past each of these areas is a piece of theatre in itself, and the real-time drama of the copper brewing vats and pipes on a raised gantry behind amber glass makes for another performance.

Collins and Turner has established a palette of raw, organic materials throughout the James Squire fitouts, so that a common thread runs through each of the sites. Concrete walls remain exposed, and raw timber, beaten copper, blackened raw steel and amber glass are subtly evocative of the eighteenth century. The density of materials is modulated throughout, so that while the overall feel is gutsy and hard-wearing, there are refined moments where appropriate. Annealed steel security mesh is used in the stair balustrade leading from the main hall, and beer bottle bottoms are inserted into the striated timber ceiling of the “galley” bar to create a darkened atmosphere. A softening of materials in the restaurant and adjacent piano bar includes delectable crushed copper curtains and booths of blonder timber.

The Charming Squire has established a throbbing hub to a section of street that has historically been relegated to backdoor status. It is a seductive piece of urban design. 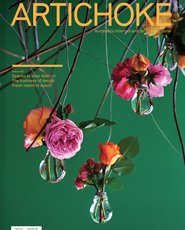 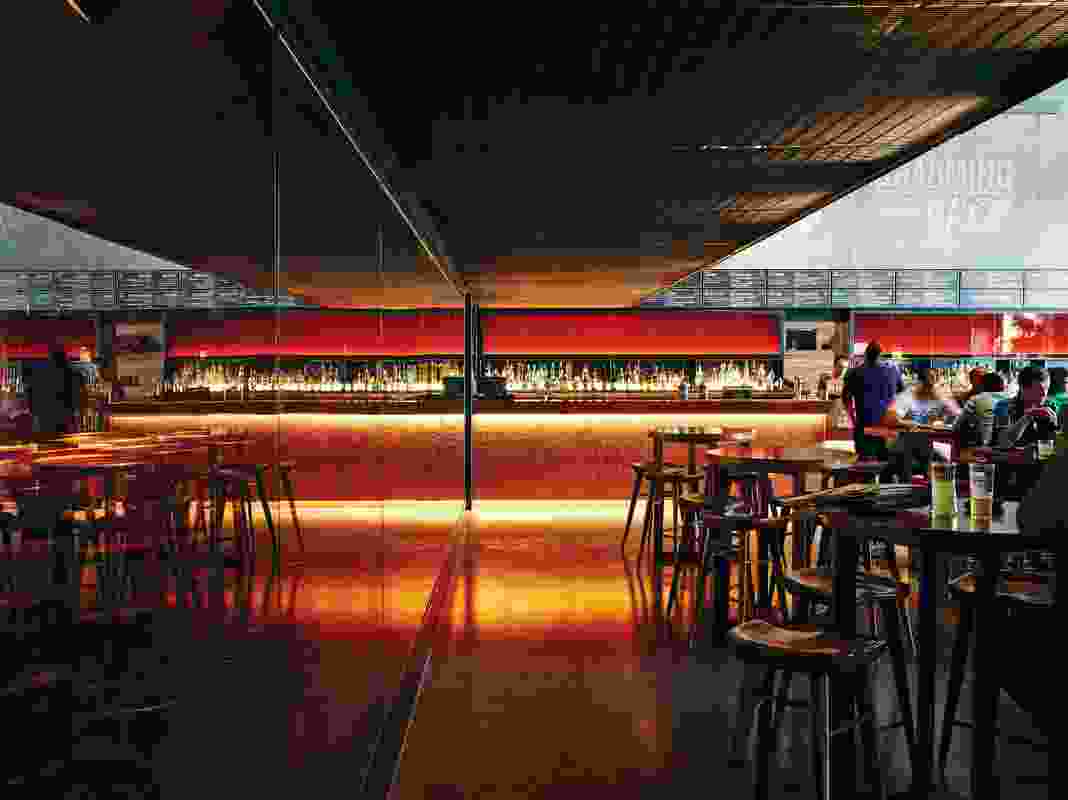 Amber-toned glass is used as feature walling to the keg room, and as lighting panel backdrops in the bar areas. 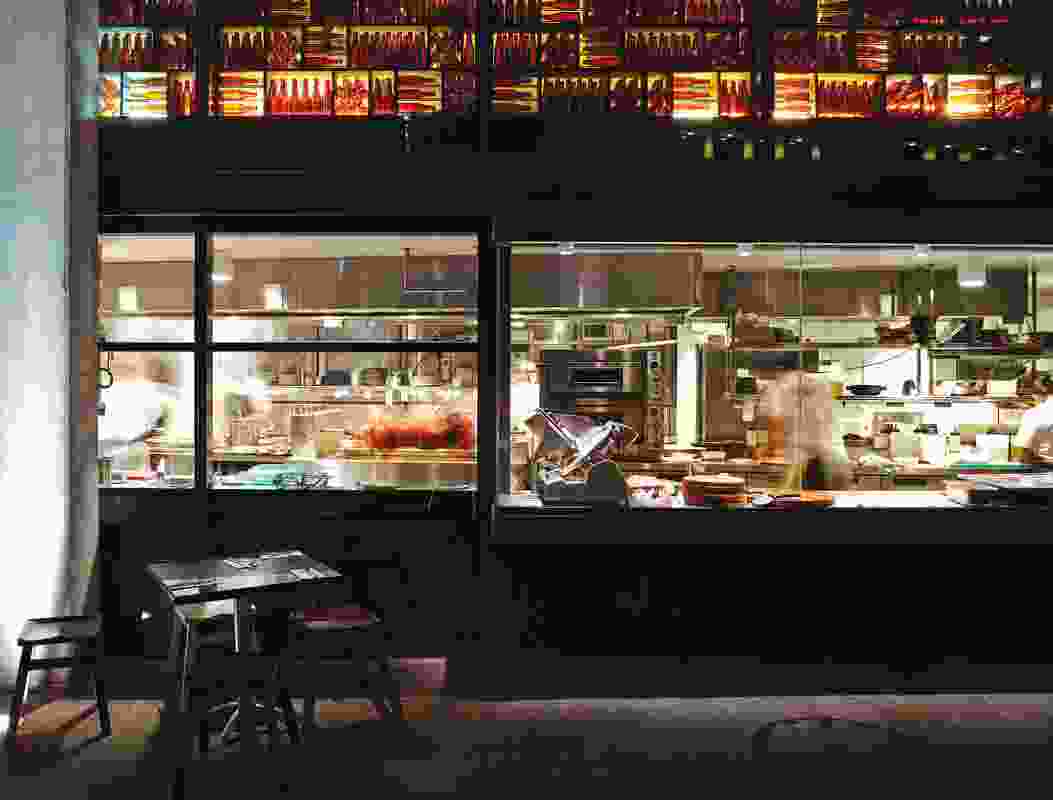 A pop-out kitchen window puts the chefs and cooks on display for passersby. 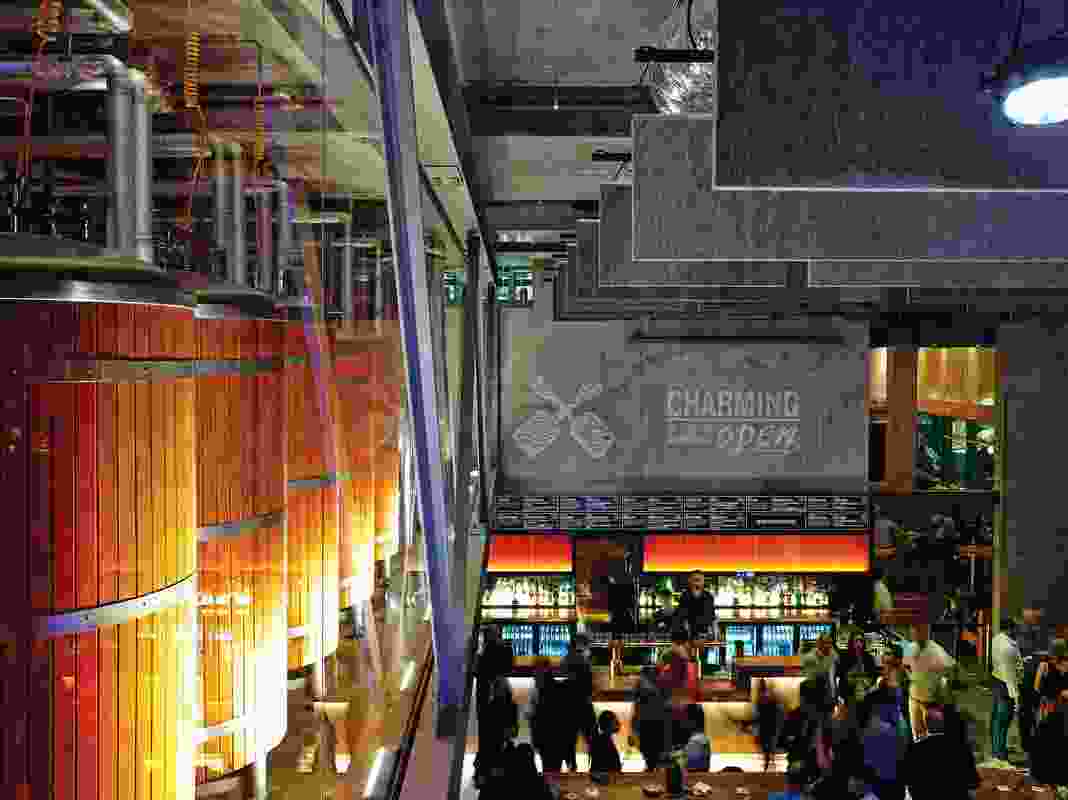 With its giant brewery overhead, the main beer hall highlights the process of brewing. 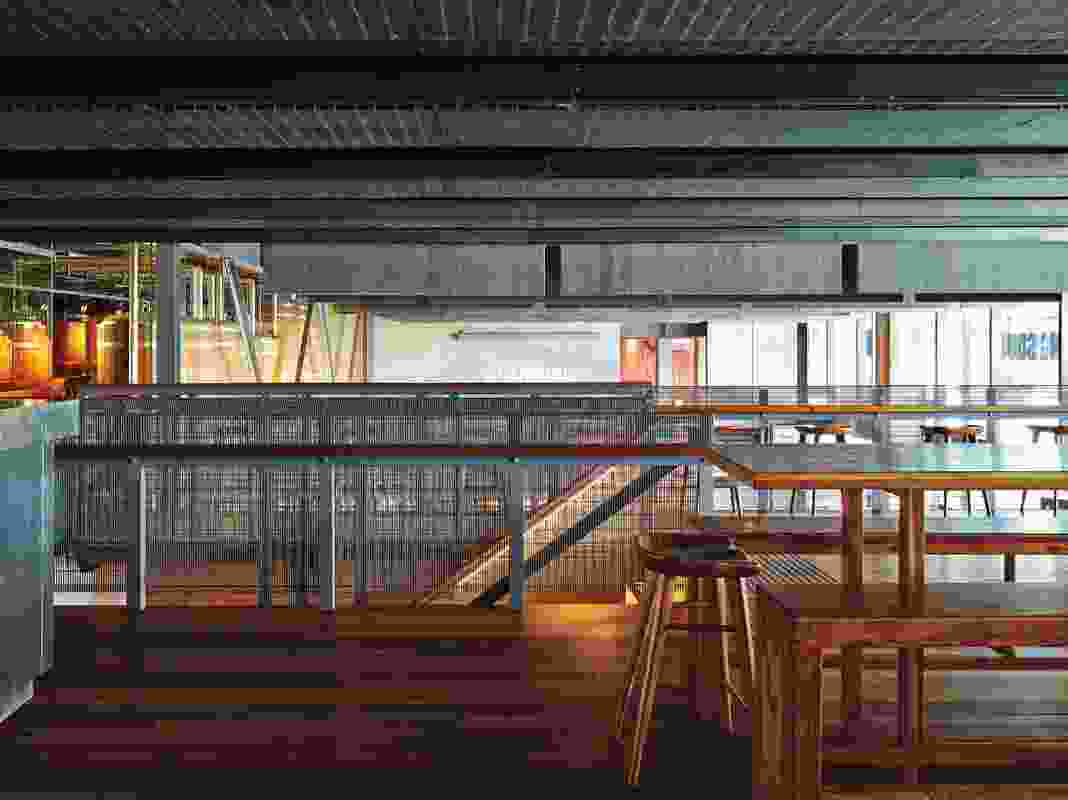 The upper function room uses natural zinc to create a lighter space that will gain character with patina over time.

The design team used a range of finishes that reference colonial Australia in the voluminous main beer hall. 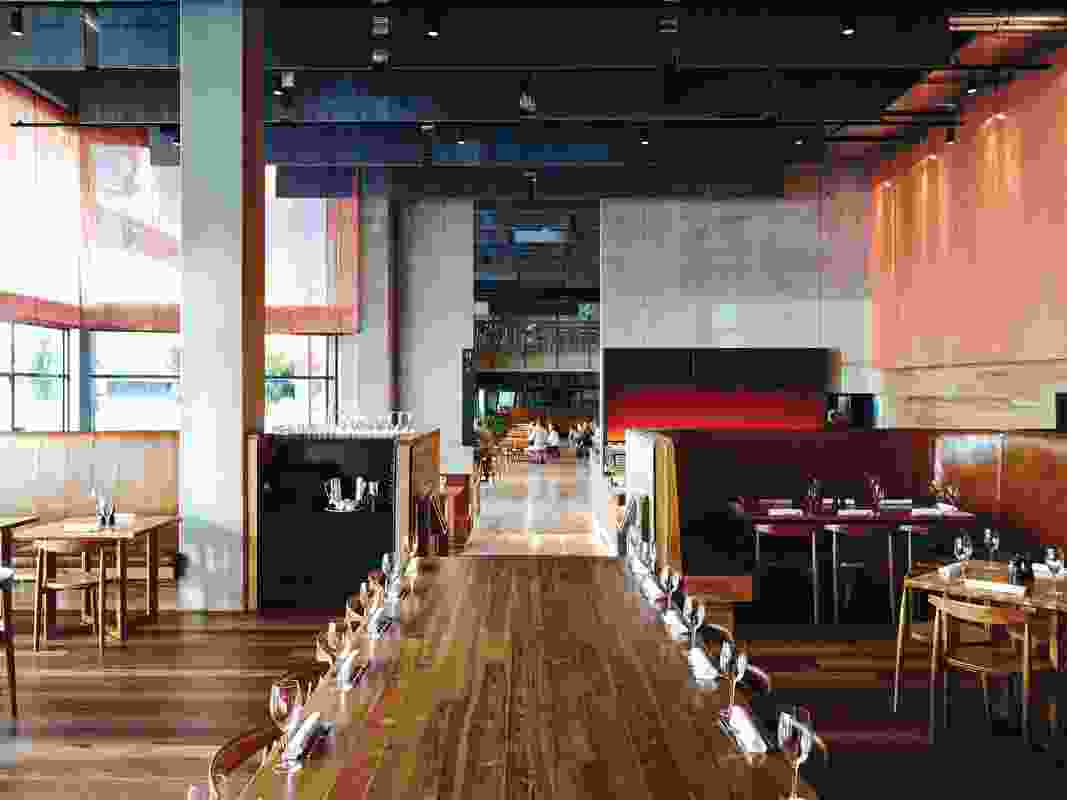 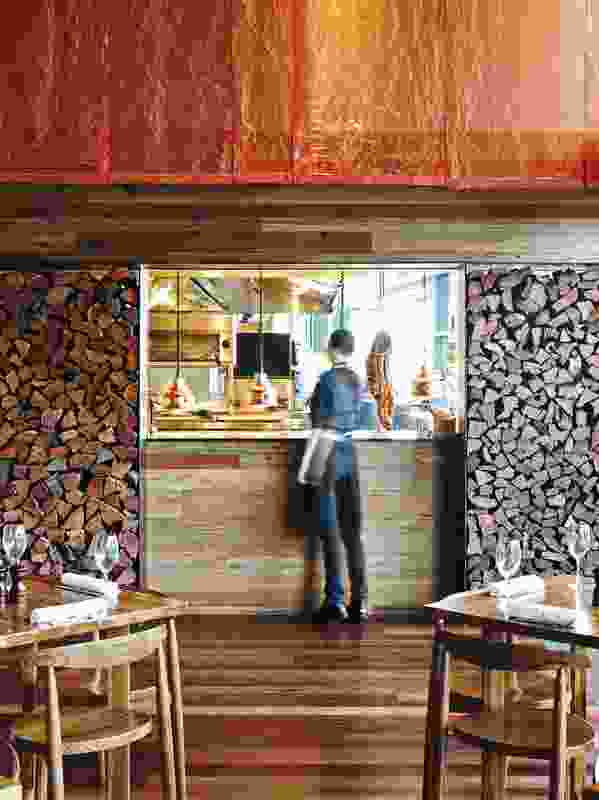 While the brewhouse’s overall feel is gutsy and hard-wearing, there are refined moments too. 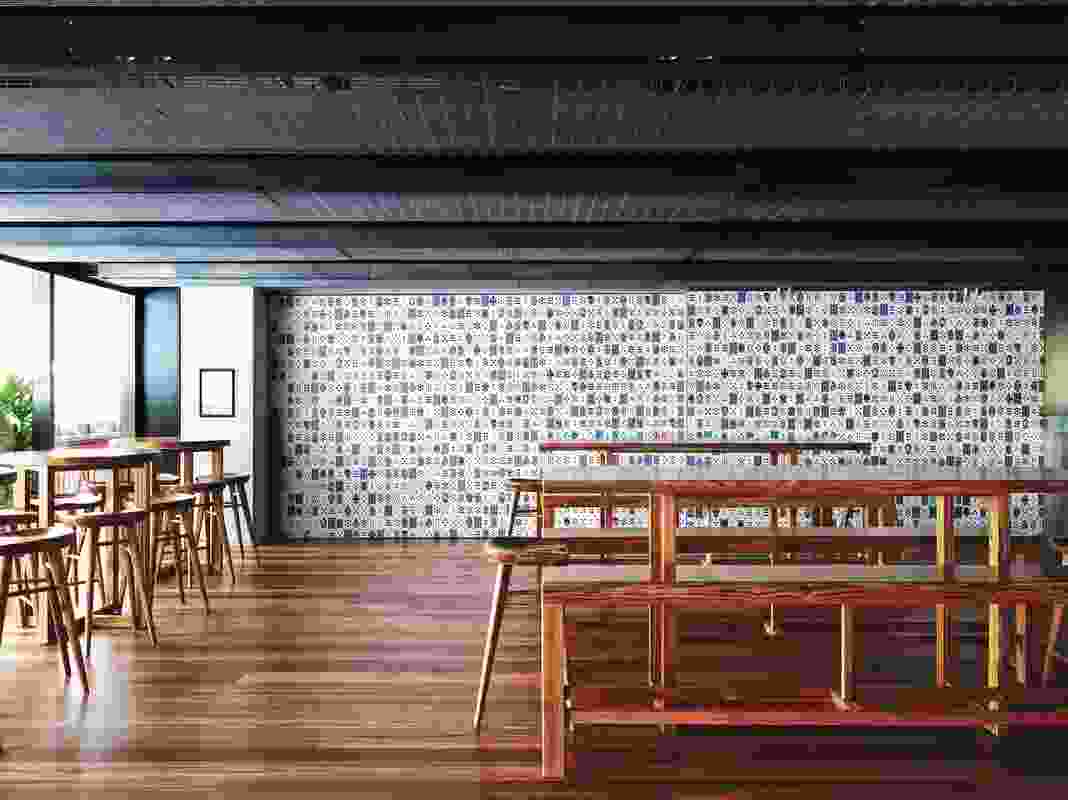 The dining room features a wall of custom-designed playing cards. 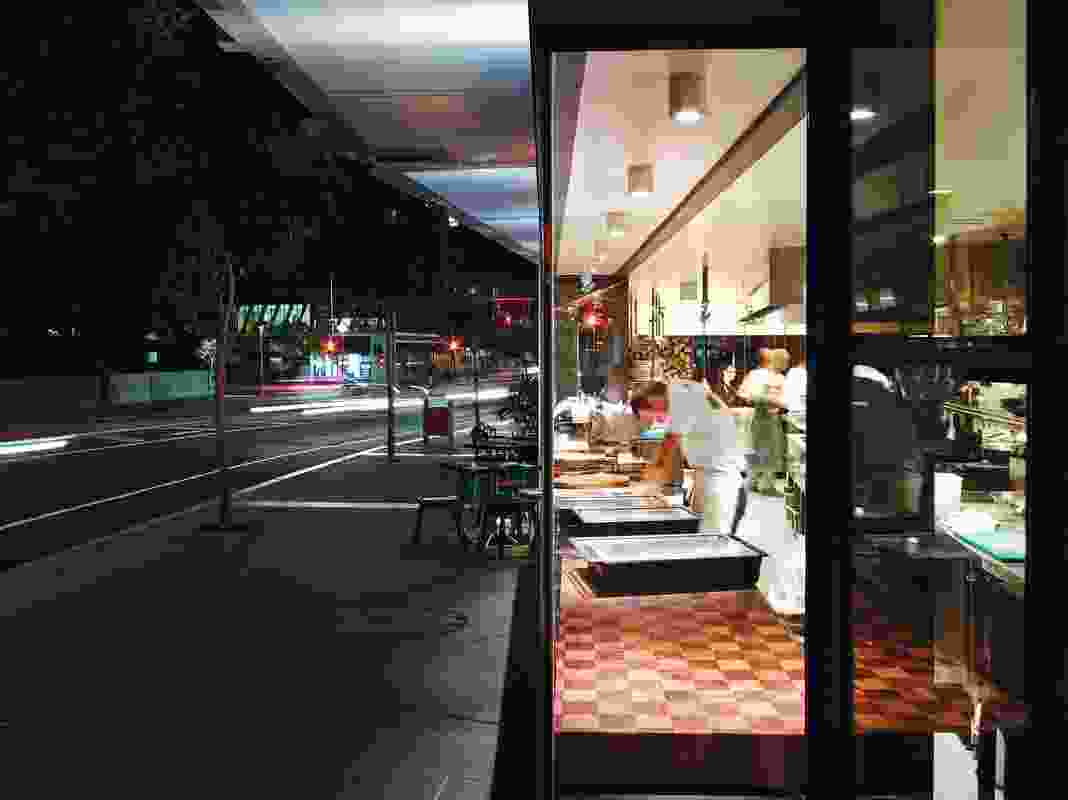 The design team wanted to activate South Brisbane’s Grey Street. its design positively connects inside and outside spaces and encourages passersby to be part of the ebb and flow.