An aesthetic rapport: The Chimney House

Filling a gap in a row of heritage terrace houses, this project by Arque involved the insertion of a self-contained apartment and the expansion and refinement of the owners’ existing house into a gallery-like space, filled with contemporary art.

Comprising the kitchen, dining and living areas, the rear extension makes full use of the site. Artwork: Jo Bertini.

The Chimney House was one of Arque’s first commissions, designed by co-directors Emma Rees-Raaijmakers and Suzanne Green. The pair had been practising architecture for more than twenty years before joining forces. Emma’s experience included six years in Hong Kong and the Netherlands working on large-scale urban architecture, while Suzanne had extensive heritage experience and had been in practice for herself for many years, focused on interiors. The Chimney House is their largest residential project together as Arque, and technically Emma’s first individual house. It is almost a freestanding dwelling – the addition fills a gap in the streetscape that had likely existed for more than a century.

The clients, Michelle and Patrick and their teenage son, had lived on the site for many years in the first of a long row of terrace houses. They also owned the empty block adjacent to their house. In addition to an expansion and renovation to their own house, they wanted to incorporate a separate, self-contained apartment that could be rented out. This section of the project comprises the infill on the street; the apartment sits on top of a garage. It squeezes three storeys into two, or almost – Arque worked hard not to dominate the established terrace house datum and had to convince the planners at the local council that they would succeed, too. The dormer window-with-balcony that projects from the roof was made as small as possible, and the facade itself is designed as a flat graphic, perforated to allow light but also maintain privacy to the apartment. It reads as one consistent surface incorporating the garage door, allowing the complex three-dimensionality of the terraces to take the limelight.

Michelle and Patrick had three priorities: they wanted a gallery-like space to display their contemporary art collection and a large bathroom for a freestanding bath, and to make sure that the rear additions didn’t disturb a treasured magnolia tree in the backyard. Art dominates the interiors – there are paintings everywhere. The couple wanted their existing terrace house to be restored rather than modernized. They appreciate the patina of age: their object collection includes dining chairs that are so old that they are well out of square, and they sourced secondhand light fittings for over the dining table, not to mention the rustic bathtub. Arque’s perforated screen on the facade is made of bronze, which will age gracefully with time. “It was almost like I was designing my own house,” says Emma, who also lives in a brick terrace. Emma had met Michelle some years before; their sons played football together and they had formed an aesthetic rapport over conversations about art, well before the idea of working together on the renovation was discussed.

Arque’s selection of colours and materials is deliberately neutral, but there are a few instances where the team’s design flair captures attention. The very un-terrace-house-like curved stair with a steel plate balustrade and top lighting is one such element. Another is the selection of ceramic floor tiles: a bold, diagonal graphic is carried through several rooms and unites them with a continuous pattern, which gives a greater feeling of spaciousness. This includes the laundry, which is designed to look good with the door open rather than be hidden away. There is even a painting in the bathroom – “utility” is fused with “gallery” at every turn. The diagonal graphic on the floor is subtly repeated on the digitally perforated bronze screen outside.

The rear extension, comprising the kitchen, dining and living areas, makes full use of the width of the site yet maintains a sense of the party wall that divides terrace blocks through a stepping of the rear facade line. The dining area extends a metre or so further into the garden. The dining room faces the client’s favourite frangipani tree; the tree was the initial prompt to stagger the rear facade, as it was originally very close to the edge of the slab, although now it is thriving replanted a couple of metres further back. The name Chimney House comes not only from the tall brick chimney visible from the entry courtyard, but also from the neighbouring chimneys viewed from the upstairs windows.

Emma and Suzanne have built their practice while juggling the demands of having young families. With this in common, they have been able to support each other and accommodate the pressures of family life within the day-to-day running of their practice. Emma tells the story of how she ended up detailing the complex timber framing of the separate apartment from hospital when her daughter became ill. The drawings were urgently required – ahead of program – as the clients had committed to the apartment late in the project and construction was already well underway. Despite the unusual “office” setting and the shift in construction program, Emma and Suzanne ensured the construction documents were delivered to the builders in time and their persistence and dedication saw the project completed.

An aesthetic rapport: The Chimney House 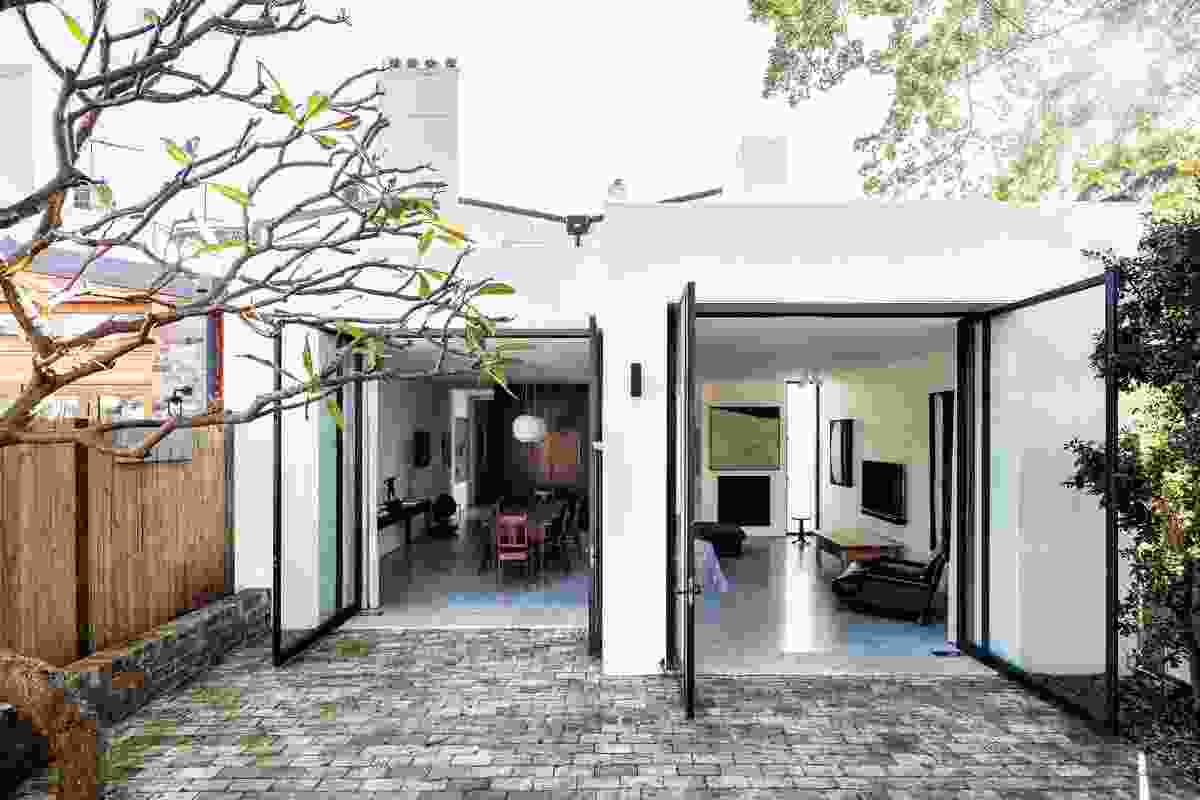 Comprising the kitchen, dining and living areas, the rear extension makes full use of the site. Artwork: Jo Bertini. 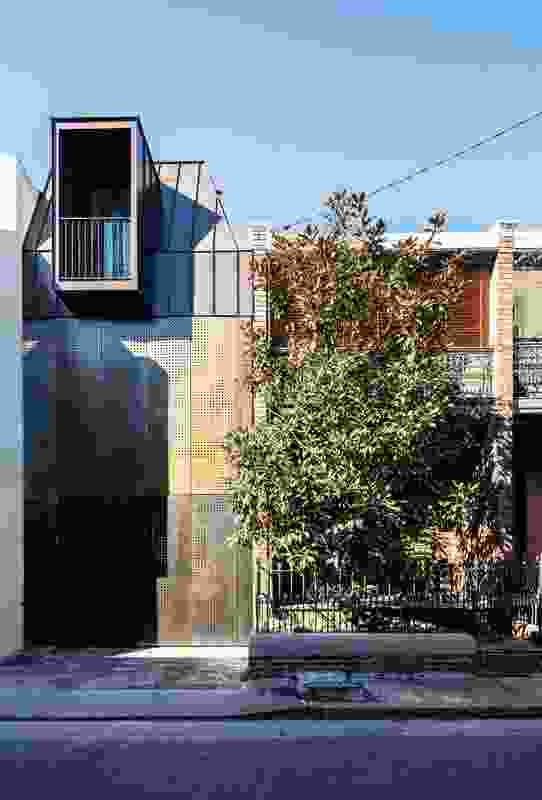 The facade is designed as a flat graphic, perforated to bring in light while maintaining privacy to the apartment. 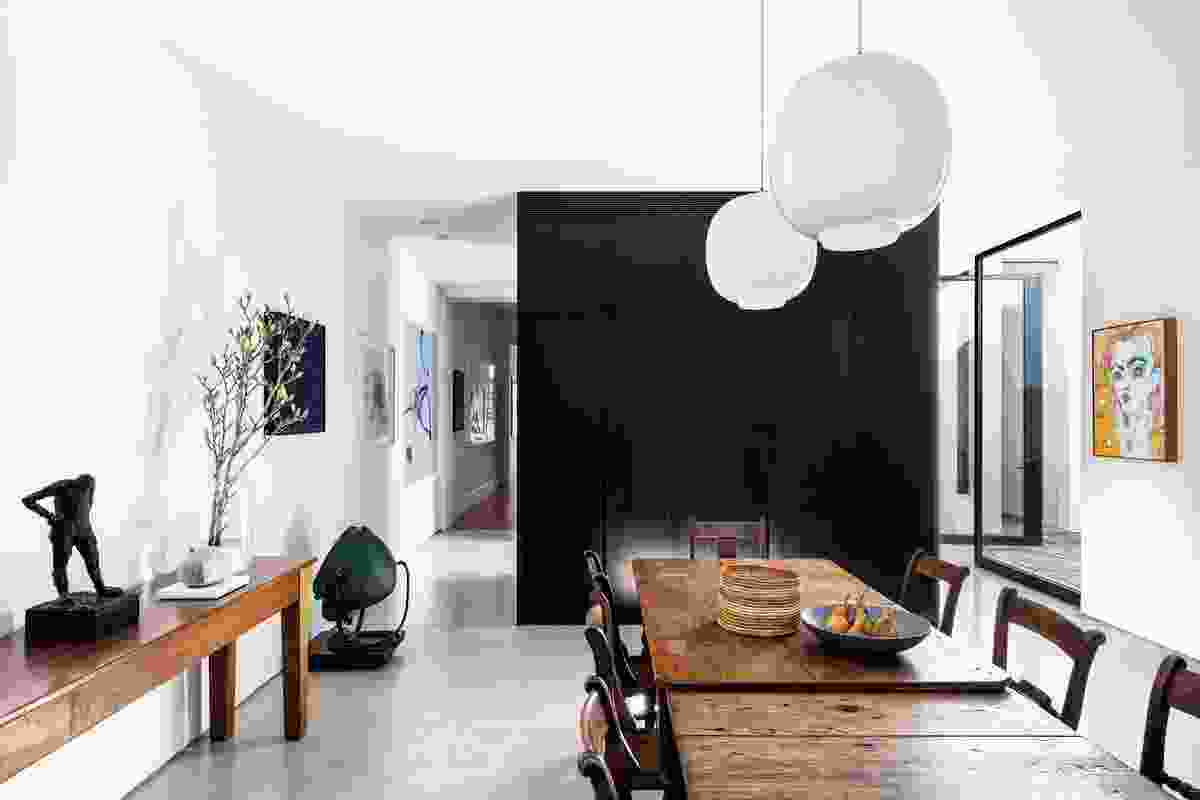 A large section of black joinery separates the dining and living areas from the kitchen. 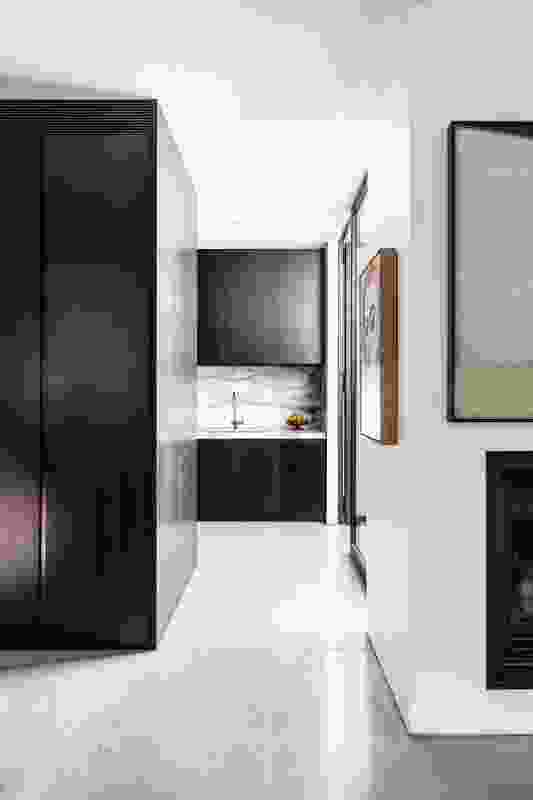 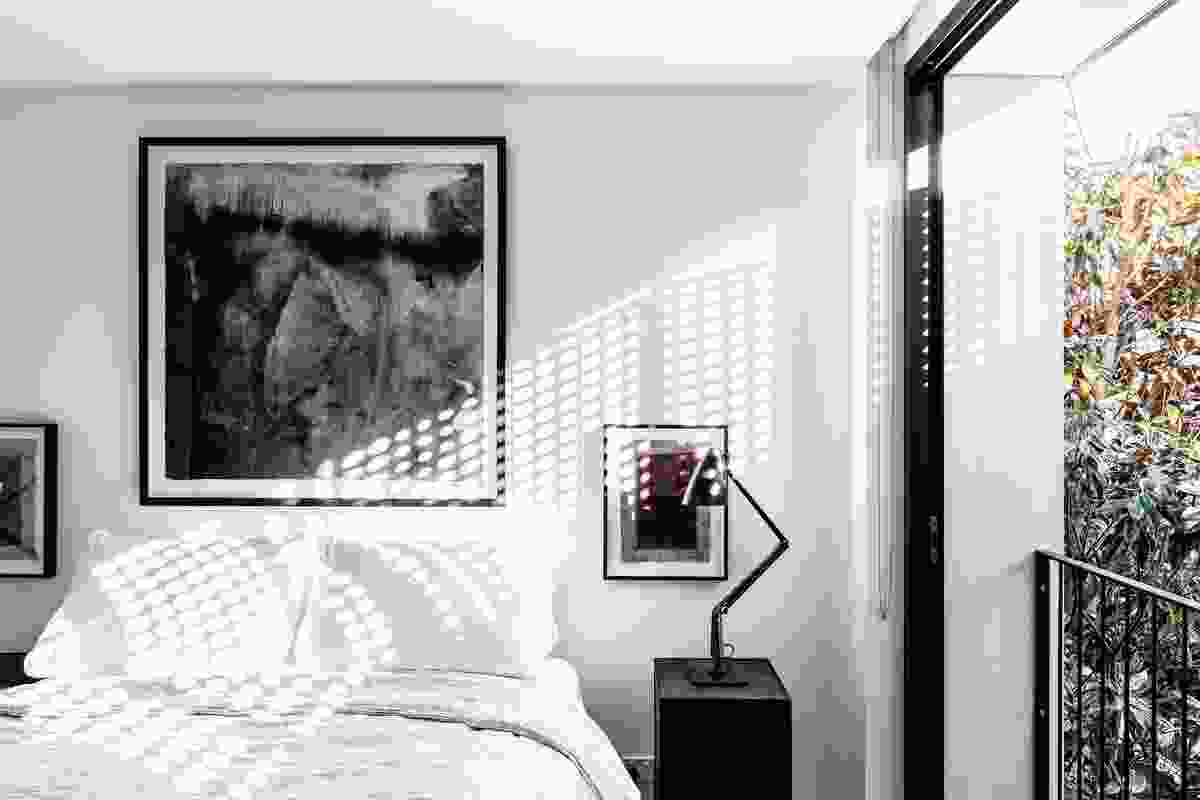 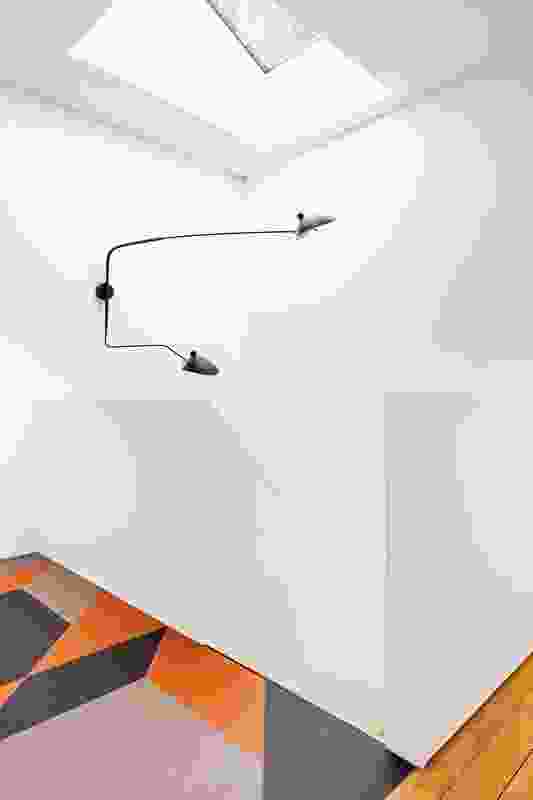 A curved stair with a steel plate balustrade and top lighting adds design flair to the house. 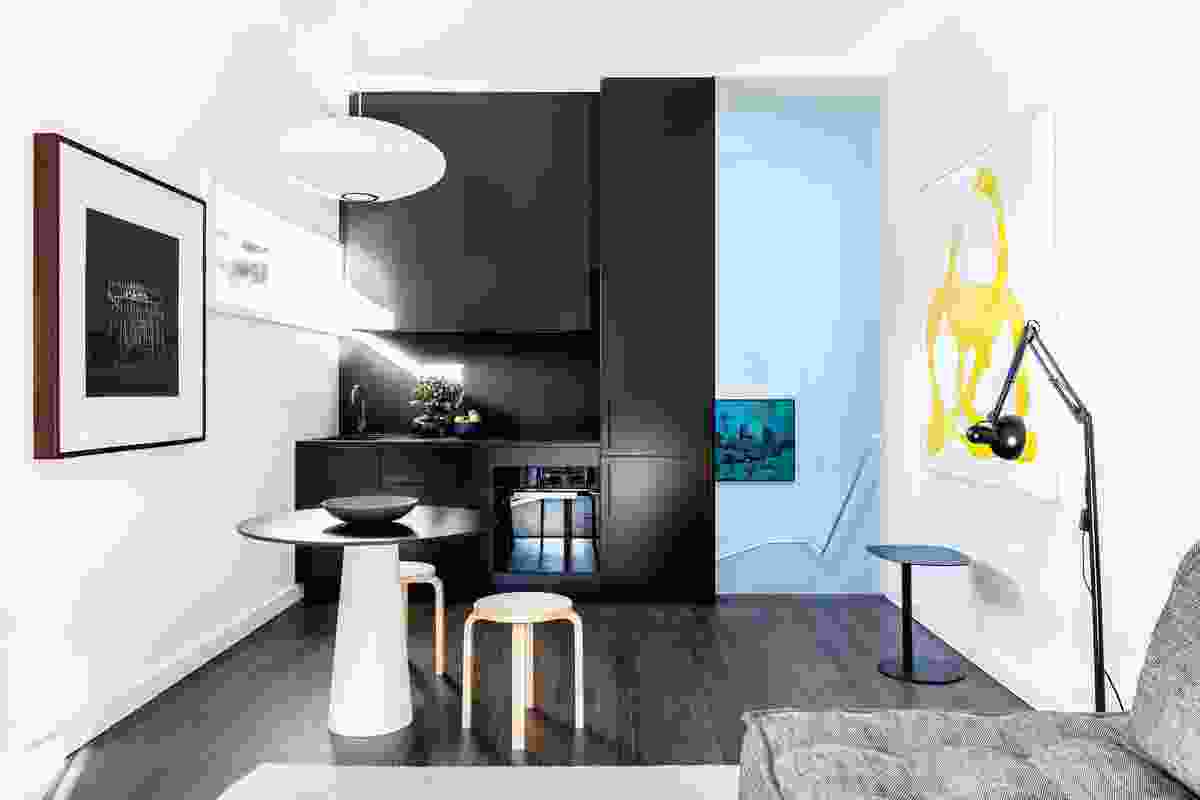 The self-contained apartment is served by a small but functional kitchen and living space on the top floor. Artwork: Unknown (left); Henry Mullholland (at stair); Tamara Mendels (right).