The disruptive urbanist: A reflection on the work of Paul Mees

Greater density is seen by many as essential to greener, less car-dependant cities. Planning maverick Paul Mees showed this belief is a delusion.

“Townville” - image drawn by Paul Mees as a teenager.

Paul Mees entered Australia’s urban planning debate having studied law, arts and mathematics but without receiving undergraduate training in planning. His interest in public transport and its role in cities stemmed from his childhood experiences growing up in the then fringe Melbourne suburb of Glen Waverley, and he was a regular user of that suburb’s train line. His frustrations and fascinations with public transport grew into activism1 and saw him become a formal advocate for improved public transport via his presidency of the Melbourne Public Transport Users Association (1992–2001). Questions of density soon loomed large in his search for theoretical and conceptual means by which to better understand why public transport struggled to compete with automobiles for travel in dispersed suburban settings and the policy excuses proffered to defer service improvements. In the late-1980s and early-1990s, when his interest was developing an intellectual rigour2, the notion that density determined transport-planning outcomes had taken root in much policy and practice, especially in Australia3. But Mees was sceptical of density measures or other land-use policies in their power to turn around automobility. He declared that even “the very best urban planning will not force people to use public transport services that are plainly inadequate”4. Did choices around urban form made decades earlier really determine contemporary mode shares, or was there more to this problem than had been recognised?

Mees was characterised as using the tactics of climate sceptics and tobacco lobbyists for identifying what he described as a “density delusion” in much planning policy.

Mees’ scholarly work initially focused more on urban structure (which describes the structural elements of urban systems and their configuration in relation to each other, especially via transport networks) rather than urban form (which relates more to mixed use and the density of built features in the city). In his PhD research5, he grappled with debates about Melbourne’s dispersed residential and employment patterns in contrast to the comparable city, Toronto, Canada, which had managed to retain and improve a high-quality metropolitan public transport network. Toronto, some had claimed6, built higher-density suburban nodes, which underpinned high demand for public transport in the city; when compared with Toronto, Melbourne had not created these high-density nodes. Mees’ empirical studies saw him travel to Toronto to observe first-hand the scale of development around rail stations there. He travelled to every station on the Toronto network outside the CBD7 and took photographs of the local urban form, repeating this exercise for Melbourne. Mees found that rather than being an exemplar of high-density urbanism, development around Toronto’s suburban rail stations was mostly similar to that in Melbourne. But if Toronto and Melbourne shared a similar urban form and structure, yet differed vastly in suburban public transport demand, density could not be supported as a determining factor for the latter. Mees instead looked to differences in transport policy and operations, suspecting that these played a much greater role in transport behaviour than previously assumed.

Once he focused on transport policy, the questions of density seemed to reduce in significance. Transport planners in Toronto were able to provide high-frequency, inter-connected public transport networks among dispersed, low-density suburbs, whereas their Melbourne counterparts struggled. Mees then identified a range of factors that contributed to this greater capability in Toronto. These included many of the factors discussed in Stone and Beza’s chapter in this volume on public transport network planning. In essence the Toronto model demonstrated that public transport could compete with the car if routes were designed to be direct and support fast services, and if interconnections between routes were made convenient by coordination of regular timetables throughout the day.

Cities, for Mees, needed to do more than wait for urban development to densify before public transport could be provided at higher levels of service quality.

Above all, Mees recognised, dedicated agencies were needed to plan and coordinate all modes and routes in a single coordinated system. If all this was achieved, a “network effect” of increasing returns to scale could be realised in public transport planning, drawing patronage to the system and obviating the need for extensive suburban densification. This recognition in turn implied a strong role for a centralised, state-led agency, in contradistinction to the neo-liberal trends in much of the Anglophone world – principally the United Kingdom and Australia – of encouraging competition between modes and operators, with coordination limited to contract specification. Mees’ profound insights were lauded by respected commentators overseas8 and incorporated into the European Union’s guidebook on planning public transport networks9.

Much of Mees’ subsequent work further investigated the network effect and the governance and planning arrangements needed to achieve it. He further undermined the proposition that “density is destiny” in travel patterns through investigations into isolated and dispersed Swiss mountain villages, which through rigorous application of network planning principles achieved high public transport mode shares10. The Swiss could achieve higher public transport mode shares in remote, dispersed villages than Australians could in mainstream suburbs. By inference, perhaps the Australian policy-makers’ and planners’ insistence that density determined mode shares and was essential to supplying good-quality public transport services was missing the point. Worse, such insistences could be a deliberate distraction from a more effective means of travel mode shift.

Mees’ insights stirred considerable controversy in transport and urban planning debates. His revised perspective on the role of density in urban development, particularly for dispersed suburban locations, was acknowledged as significant by a number of colleagues both in Australia11 and elsewhere12. However, some of his work drew extraordinary reaction. In a 2009 journal article13 he had argued that apparent differences in density between Australian, Canadian and US cities were less than assumed by most researchers, such that transportation policy played a more significant role relative to land-use policy than had been previously held. Mees was subsequently characterised as using the tactics of climate sceptics and tobacco lobbyists14 for identifying what he described as a “density delusion” in much planning policy. This “delusion” implied that the pursuit of transport sustainability goals through densification was misguided. That density debate remained unsettled at the time of Mees’ passing, in part because he had not had time to respond to the critique of his work that had been advanced. This iteration of the debate hinged on arcane but extraordinarily significant methodological aspects of the comparative measurement of urban density, as described in Mees’ initial paper15, and Newman and Kenworthy’s robust response16, and further appraised by Townsend and McGurk17.

If he did not necessarily concur with peers on the foundations of urban sustainability, certainly Mees’ views on transport policy18 were diametrically opposed to laissez-faire and pro-automobile scholars such as Gordon and Richardson19. His insights also, however, unsettled the foundations of the environmental critics of that group and, moreover, their alternative policy prescriptions. Mees thus faced the dual intellectual task of maintaining a critique of neo-liberal urban development and automobile dependence while proposing solutions to these problems that differed markedly from those of most contemporary environmental critics. Only in the 2000s did his findings on transport policy and transport patterns gain much greater recognition among scholars, the Australian Research Council and policy observers20. Cities, for Mees, certainly needed to move away from ongoing support for automobile travel, but they needed to do more than wait for urban development to densify before public transport could be provided at higher levels of service quality. The intellectual and personal effort needed to sustain robust critique of two dominant and opposing schools of thought in transport policy, from a minority position, was considerable.

This is an extract from The Public City: Essays in Honour of Paul Mees edited by Brendan Gleeson and Beau B. Beza (Melbourne University Press).

1. Erica Cervini, “An Activist and Scholar in the Making” in Brendan Gleeson and Beau B. Beza (eds), The Public City: Essays in Honour of Paul Mees (Melbourne: Melbourne University Press, 2014), 14–26

The disruptive urbanist: A reflection on the work of Paul Mees 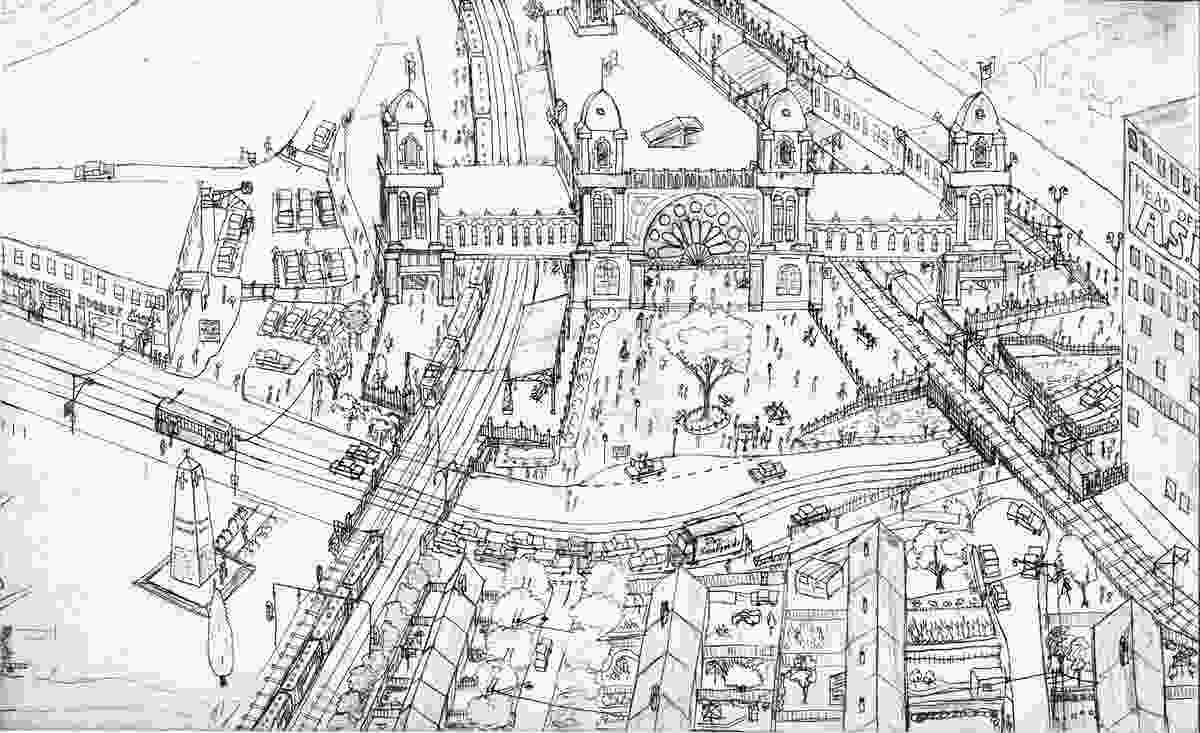 “Townville” - image drawn by Paul Mees as a teenager.