Set within a luscious tropical landscape, this new house by Charles Wright Architects negotiates issues of privacy and preservation of sightlines to make sure everyone can enjoy the undeniably spectacular coastal view.

A frangipani tree within a circular garden bed marks the entry to the low-lying house.

The clients of The Edge in Port Douglas, Queensland, engaged Charles Wright Architects to help locate a suitable spot for their dream home. A notoriously difficult site on Flagstaff Hill, high above Port Douglas, was found and purchased and design work was initiated. Attempts by previous developers to build on the site had met strong resistance from local authorities, focused on the preservation of sightlines from the public lookout above the site down to Four Mile Beach. This was a challenging, even daunting constraint that in the end proved surmountable due to some agile and very imaginative thinking.

Director Charles Wright worked closely with his clients to develop a brief that took into account the quality and performance of materials and their finishes. They wanted to pursue a contemporary way to live in the tropics. All details were worked and all materials scrutinized in order to ensure resolution and coherence. Nothing was left to chance.

Situated just over an hour’s drive north of Cairns, the house is reached by a highway that hugs the dramatic coastline. It is a memorable journey that reveals momentary glimpses of the ocean. Without warning, the occasional opportunity to pull over and breathe it all in presents itself. Steeply rising mountains slam into the ocean, pinching the highway before retreating behind cane fields and lush rainforest valleys. As quickly as they recede, they creep up again, holding you in a never-ending scenic game of cat and mouse.

The position of the house directly beneath the lookout meant that the architect had to meet the local council’s view-preservation requirements. He also needed to articulate and control the public and private nature of the view from the house and the lookout. To overcome these conditions, the structure was ingeniously cantilevered away from the hill, working to a height-restricted building envelope that ensured a complete view of Four Mile Beach from the lookout.

Upon arrival at the site, the steel gate opens to reveal a driveway that swings down around a frangipani tree (centrally located in a retained circular bed) before effortlessly sliding under the overhang of the roof plane. This overhang is made by the removal of mass in order to maintain the integrity of the elevation’s form. For visual privacy from curious eyes above there is a continuous vertical screen of spaced spotted gum battens. The pragmatic result is a covered drop-off point to combat the annual tropical wet seasons.

As you move through the compressed entry, the distant view quickly expands to capture the coastal mountain range to the south. It is breathtaking. The emptied horizontal opening stretches from the internal dining space at the east across to the main bedroom at the west. A big opening to a view is a simple idea, but one that requires absolute commitment. While here the result appears effortless, it is clear that the resolution of the sliding glass doors, the way they stack out of the way when completely open, the way they close down to protect from southerlies, has required enormous thought by the architect. This treatment has ensured that the country out there is more than a view; it positions its inhabitants within this country.

The clam-like concrete form is heavy yet expressive, protective yet open, refined yet generous. Contrasts abound in this house – from the rough texture of the board-marked concrete ceiling slab against the smooth sand-cement render of the core-filled block walls to the impenetrable hardness of the Pilbara marble benchtops against the transparent, frameless glass sliding doors. The space between the cantilevered concrete plinth and the cantilevered concrete canopy is charged with an energy that emanates from the separation. The roof beams soar up and over the two-sided kitchen, above the living and dining space, before diving towards the distant scene.

At the centre of this voluminous space is a custom-designed circular lounge covered in hand-stitched leather. It provides an intimate setting for drinking in the view, completed by an adjacent fireplace. Fully retractable sliding doors separate or connect the private main bedroom to the more public zones. The external terrace is bookended by a swimming pool at one end, and a concrete day bed at the other. Suspended at the outermost edge of the house, the terrace makes it possible to swim, eat and sleep under the watchful gaze of an ancient mountain range.

The clients, the architect and the builder have worked in a synthesized manner with an ambition to do the best they could do. This is evident in the clarity of the plan, the control of form and the construction of details. The net effect is a genuine marriage where love has been worked into the designing and building processes. It happened because of a commitment to finish the project the way it started. 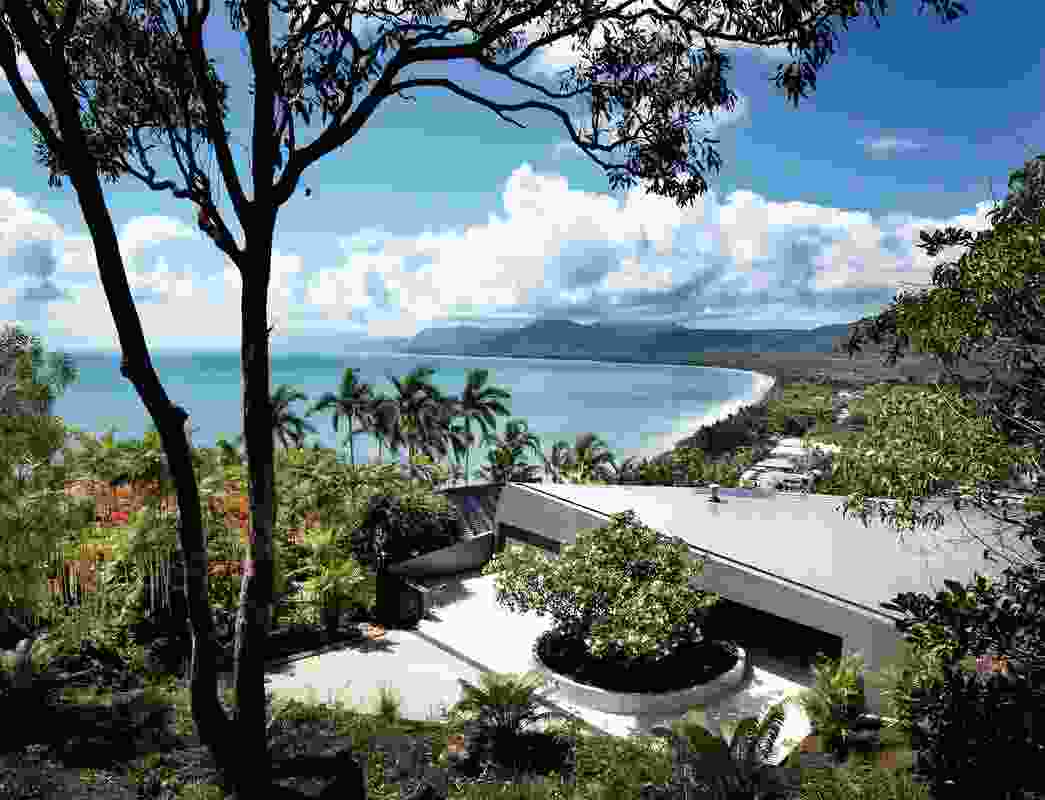 A frangipani tree within a circular garden bed marks the entry to the low-lying house. 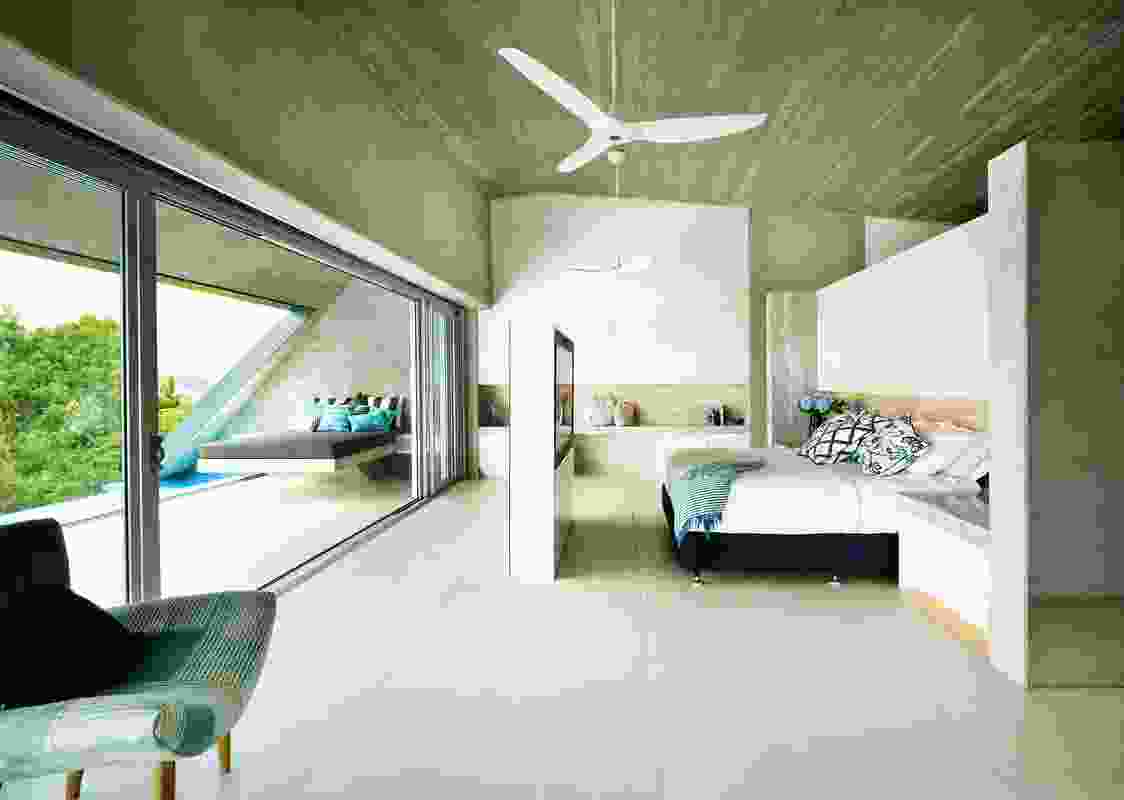 The rough texture of the board-marked concrete ceiling slab contrasts with the smooth sand-cement render of the core-filled block walls. 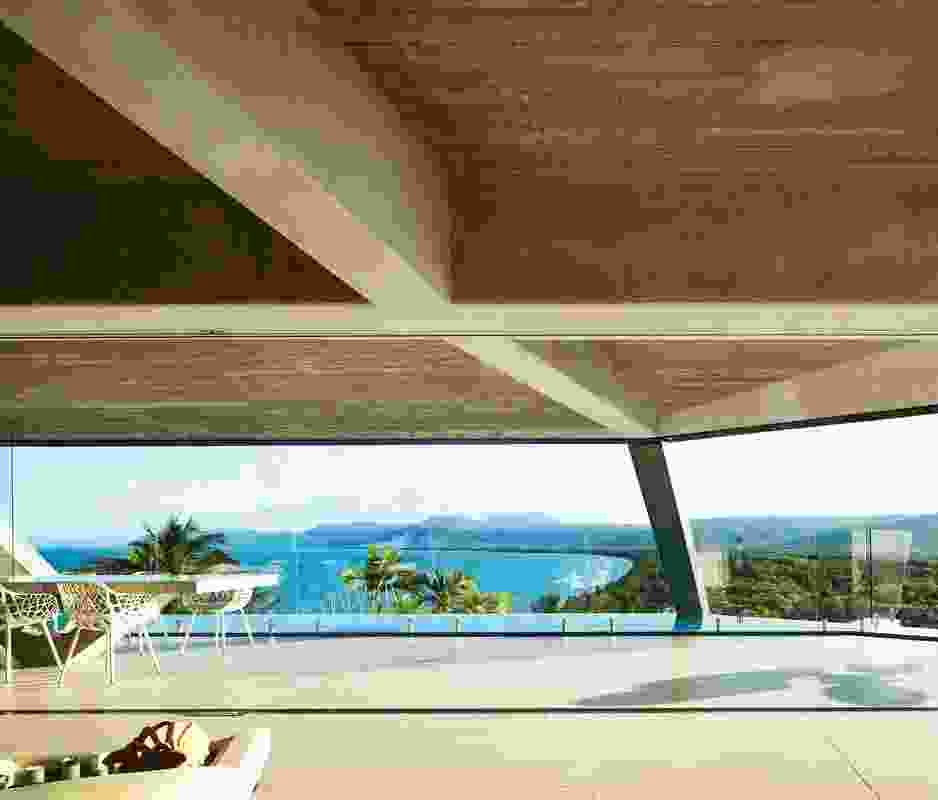 From the dining space at the east to the main bedroom at the west, the house has a view over Four Mile Beach to the horizon. 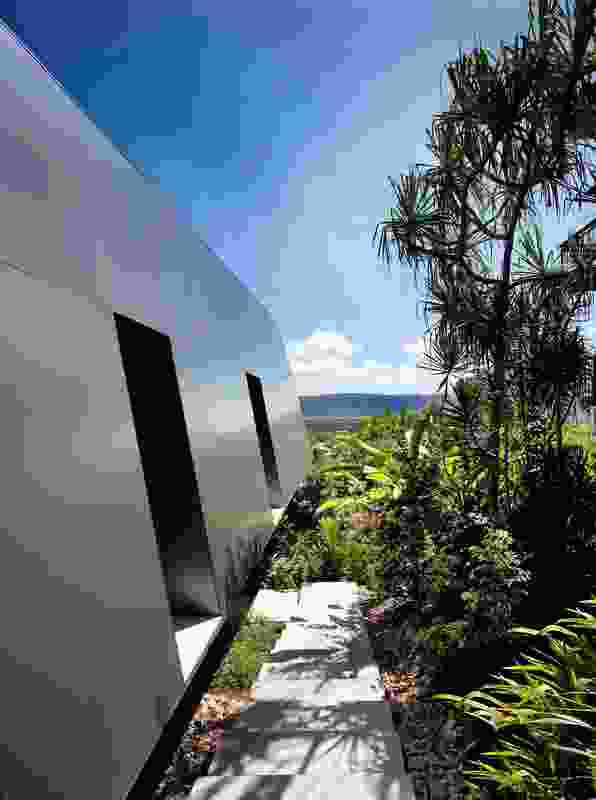 The concrete structure was used for its ability to deal with the harsh and corrosive tropical environment. 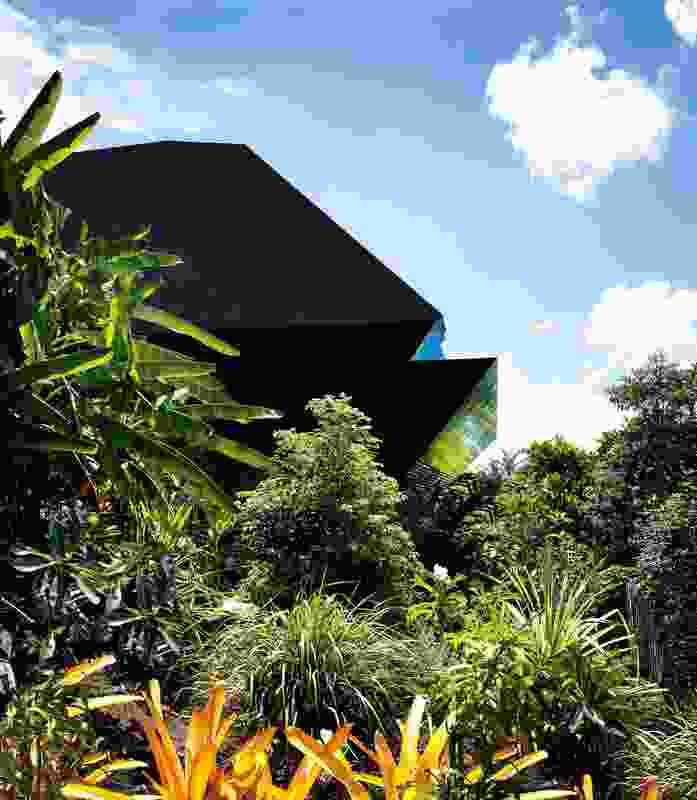 The clam-like form of the house is heavy, yet expressive in the lush tropical landscape. 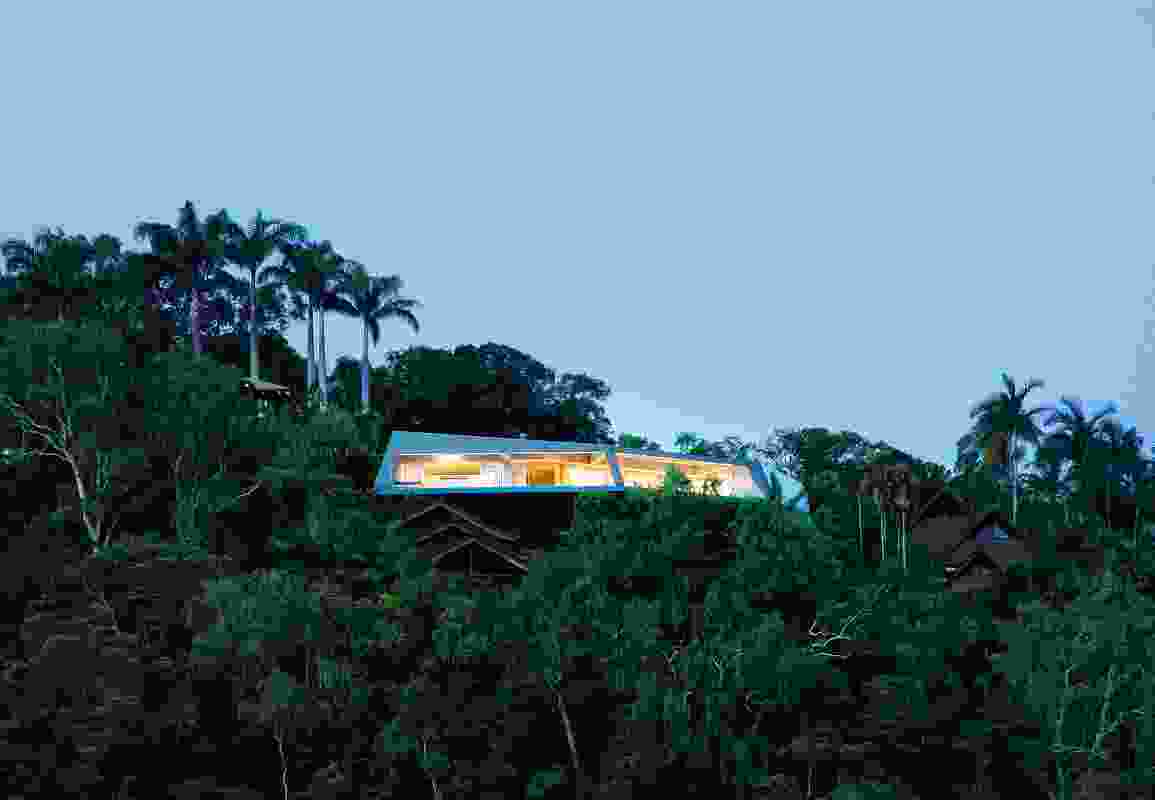 A cantilevered building resolved privacy issues and allowed the council’s view-preservation requirements to be met. 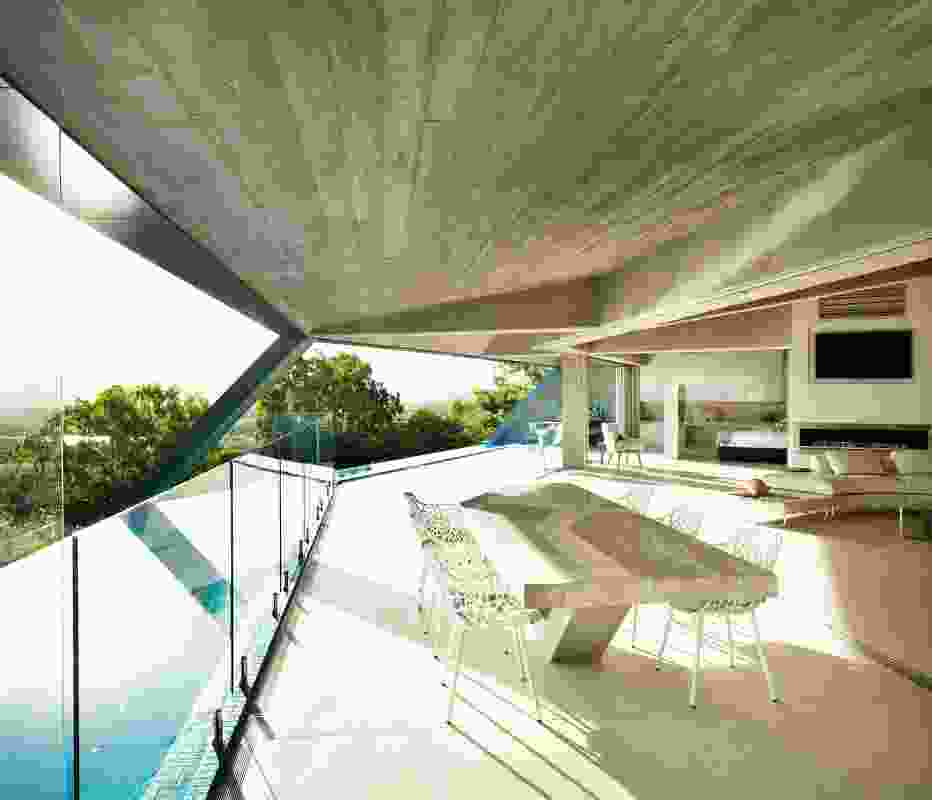 The more public zones of the house are separated from or connected to the private main bedroom via fully retractable sliding doors. 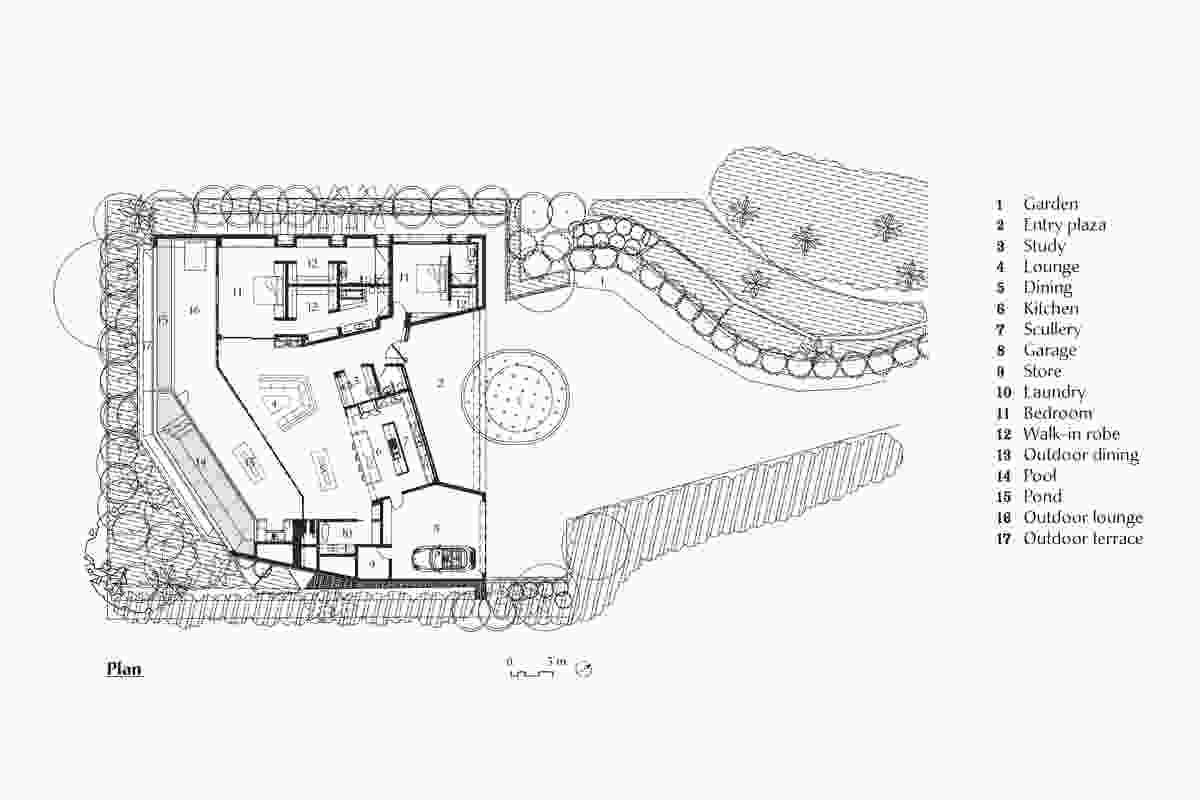