The new home of the Melbourne Conservatorium of Music is a sensuous architectural vessel that supports musical learning as it mediates between performer, audience and city.

Concrete panels on the facade recede, tilt and fold to provide solar protection yet also reveal sliced silhouettes of life within. A dramatically cantilevered volume accommodates a recital hall.

In Melbourne’s Southbank, passers-by heading south on Sturt Street might wander beneath the discreet canopy of the Melbourne Recital Centre’s monolithic bluestone western wall (ARM Architecture, 2008) and immediately past a narrow-shaded lane, and find their gaze attracted by a low archway framing a buzzing new interior. A glazed screen recessed within this gentle yet grand gateway exposes those inside the building, some mingling in conversation, others moving through and around a curving passage before disappearing from sight. A little further along the street, a sequence of deep, bell-shaped portals perforate the building’s envelope, first one and then, after a pause, three others in closer proximity. Bespoke in size and placement relative to the ground plane, these mysterious apertures invite a variety of audiences, small and tall, alone or as a cluster, to lean into the depth of the wall, focus, and peer inside the building. The material condition is now intimately felt. Hands instinctively fold over smooth curved frames and then extend out to trace the undulating skin. Oval figures, perfectly pressed into the concrete surface, pattern the facade, many of them crowned with domed ceramic discs – reddish, glistening and impossibly tactile. The experience intimates a warm, spontaneous exchange between the inner life of this architecture and those that surround it.

What is the remit of architecture in activating the city? How can the urban realm enrich the architecture? What is the interface between one and the other? John Wardle Architects’ (JWA) Ian Potter Southbank Centre, new home to the Melbourne Conservatorium of Music (MCM) at the University of Melbourne’s Southbank campus, invokes a vital reciprocity between the institution and its location. In this latest addition to Melbourne’s arts precinct, a sensuous architectural vessel supports musical learning as it mediates between the performer, her fellowship, her audience and the city. Camaraderie and dialogue, intrigue and curiosity, are here endorsed as vital to the acquisition of knowledge; to taking part in culture and society.

JWA’s early considerations of the site were in light of urban priorities. As a participant in the Victorian state government’s 2013 strategic planning process for the precinct, the practice prepared the Melbourne Arts Precinct Urban Design Framework, a methodical guide for the ongoing development of Southbank as a distinct yet connected urban entity. The study accepted and affirmed the remarkable concentration of arts infrastructure in Southbank and advocated for a radically enhanced integration between architectural nodes and their settings.

Presented as a toolkit for coordinated policy and design, the document is distinctive for its balance of the guiding principle and fine-grain action. From the clarification and reuse of the existing environment to alterations and new built works, a catalogue of “one hundred small projects” endorsed incremental tactics as a powerful tool for urban transformation. Looking across and between the proposed initiatives, three core ideas resonate: that material texture and expression are critical to local character; that in-between thresholds are potent sites of civic generosity; and that the functional fluidity of the urban realm can positively disrupt the predictability of planned institutions. The claim here is not for an equivalence between architecture and the city but rather a porous and tactile entity in which architecture and city are entangled.

Among the existing infrastructural assets, the University of Melbourne’s Southbank campus and the institutional belt along Sturt Street were framed as critical to the proposed integration: respective centres for education and practice with potential for spirited collaboration and synthesis. From this perspective, the planned relocation of the MCM from Parkville to Southbank was endorsed as a transformative opportunity to interweave the campus and the street, at the very heart of the arts precinct. With a notional footprint within the strategic framework, the University of Melbourne’s MCM design competition provided JWA with the opportunity to extend its urban propositions through an architectural lens. Awarded first place, they secured the commission in 2015. John Wardle deems the synergy between architect and client to have been fundamental to the design conception and realization, noting the spirited engagement of Barry Conyngham (Dean, Faculty ofFine Arts and Music) and Gary McPherson (Ormond Chair and Director, MCM).

The scheme was unusual for the building type. Acoustic and technical demands associated with music conservatoriums typically imply a grounded and interiorized work with visual and auditory isolation. In the JWA response, two core principles rethink this tradition: a compact and vertical organization minimizes the architectural footprint, thereby liberating the adjacent site area for public use; and the necessary layering of “box-in-box construction” to achieve acoustic control is rendered permeable through connected thresholds between adjacent environments. In both strategies, the architectural order was synthesized with urban ambitions.

Concentrated and poised, an eight-storey block occupies the western campus edge, set against a service lane to the north and the iconic Victorian College of the Arts (Edmond and Corrigan, 2004) to the east. A double-height, concrete-clad podium defines the south-west corner. Subtly delineated from the volume above, it forms a common base to juxtaposed upper elevations.

Concrete remains dominant across the Sturt Street facade, expressed as a thin skin over and inplay with glazed surfaces. Deftly composed of variously scaled panels, this implied shield judiciously recedes, tilts and folds to protect the interior from the western sun, while revealing sliced silhouettes of life within. The concrete is impeccably fabricated with crisply inlaid pattern and carefully scaled lively aggregate. Domed ceramic discs dot the surface with a fluid shift in density. Individually glazed in dark red tones, they are a nod to the brickwork of surrounding warehouses, although here these figural gems signal an elevated and sensorial institution.

To the south, the glass inner skin turns the corner, now bare and unmediated. Assembled as a gridded curtain wall and faceted in a shallow zigzag, it is alive with a play of light and shade. Three major performance venues are vertically stacked behind, the middling and largest volume rotated to partially extend beyond the architectural frame, ambitiously cantilevered. Here, the glazed cladding is copper- tinted and reflective, representing the music hall as a shimmering canopy over the public domain. Directly beneath it, a sculpted stage offers a fourth venue for impromptu performances. It marks an inviting entry to a linear park (Aspect Studios, 2019), oriented toward and blended with the campus.

Material finesse extends throughout the interior where an elemental palette achieves calm continuity across diverse settings. Purpose-built yet welcoming of neighbouring institutions, three major venues accommodate a variety of performance genres, each distinct in form, mood and scale of audience. From a two-hundred-seat auditorium with capacity for a 120-piece orchestra, to a recital hall for up to four hundred and a rehearsal studio with capacity for 135 people, medium, large and small facilities have been arranged in vertical sequence. More intimate offices and practice rooms wrap around the perimeter, mediated by generous circulatory and breakout spaces. The atmosphere is informal yet refined, robust yet elegant, casual alongside concentrated. It is as if the hybrid condition of programmatic brief, at once an educational institution and a venue for musical performance, has relaxed familiar hierarchies toward new associations.

It is in the interstitial environments that the working life of this institution is evocatively present. The ground level is both thoroughfare and civic entrance. Above, students gather at tables around a figural void, some reading, others in discussion. Further up again, props and instruments are rolled back and forth alongside the visiting audience. At every turn, framed openings and transparencies offer views to and from adjacent performance settings. And precisely engineered rehearsal rooms maintain internal acoustic control while allowing the sounds of practice to filter out. The learning of music permeates the building; it is celebrated and viscerally experienced.

Melbourne is on display throughout. From immediate street scenes and views of the city skyline to the north, the campus and Domain Parklands to the south, and South Melbourne to the west, the building’s occupants are oriented toward the local context. In this splendid new addition to the Southbank arts precinct, the expression of art and city life beautifully coalesce. The power of this architecture lies not only in the richness and coherency of architectural thought but also in the embrace of what lies outside, of what architecture is not, the enigmatic other. 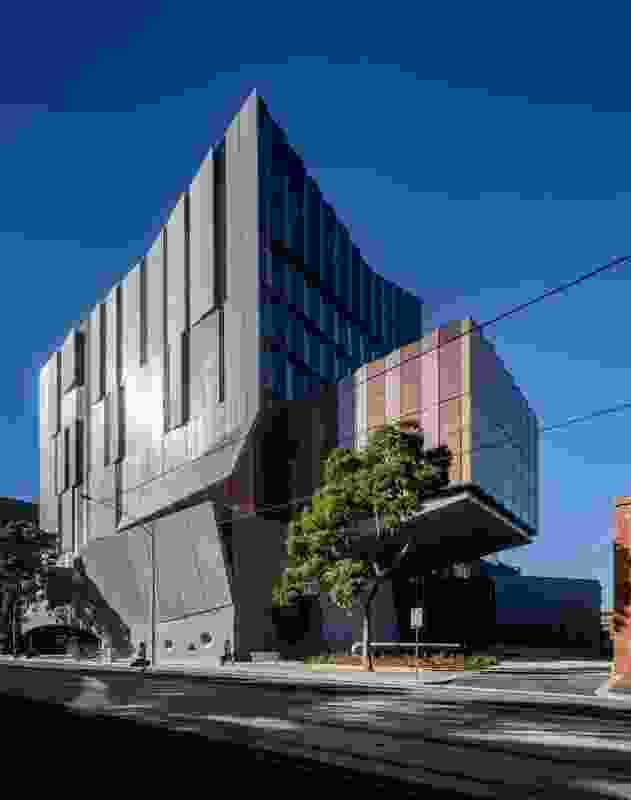 Concrete panels on the facade recede, tilt and fold to provide solar protection yet also reveal sliced silhouettes of life within. A dramatically cantilevered volume accommodates a recital hall. 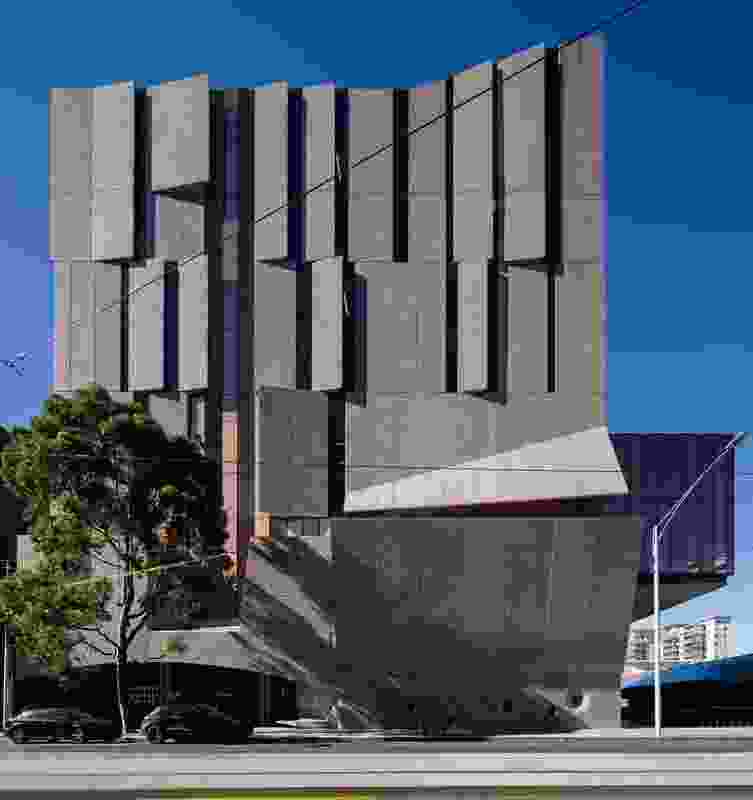 The building provides an important point of connection between the University of Melbourne’s Southbank campus and the series of cultural institutions located along Sturt Street. 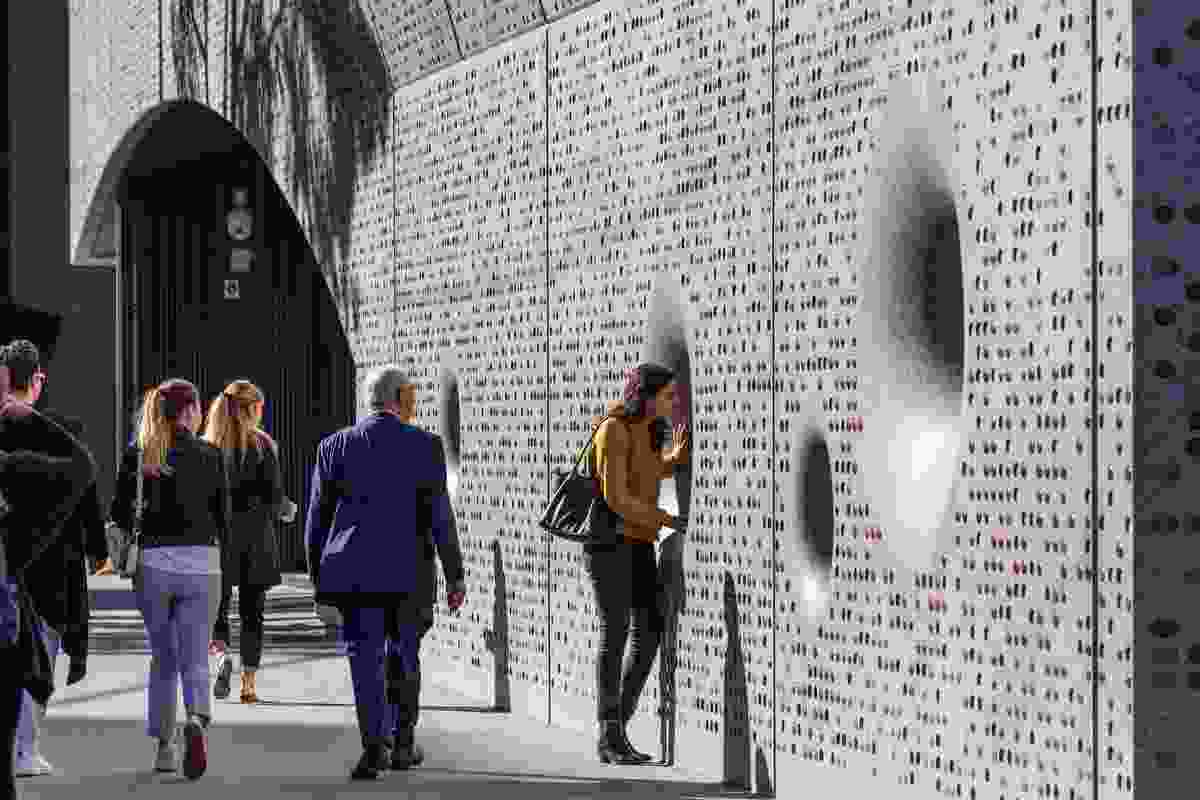 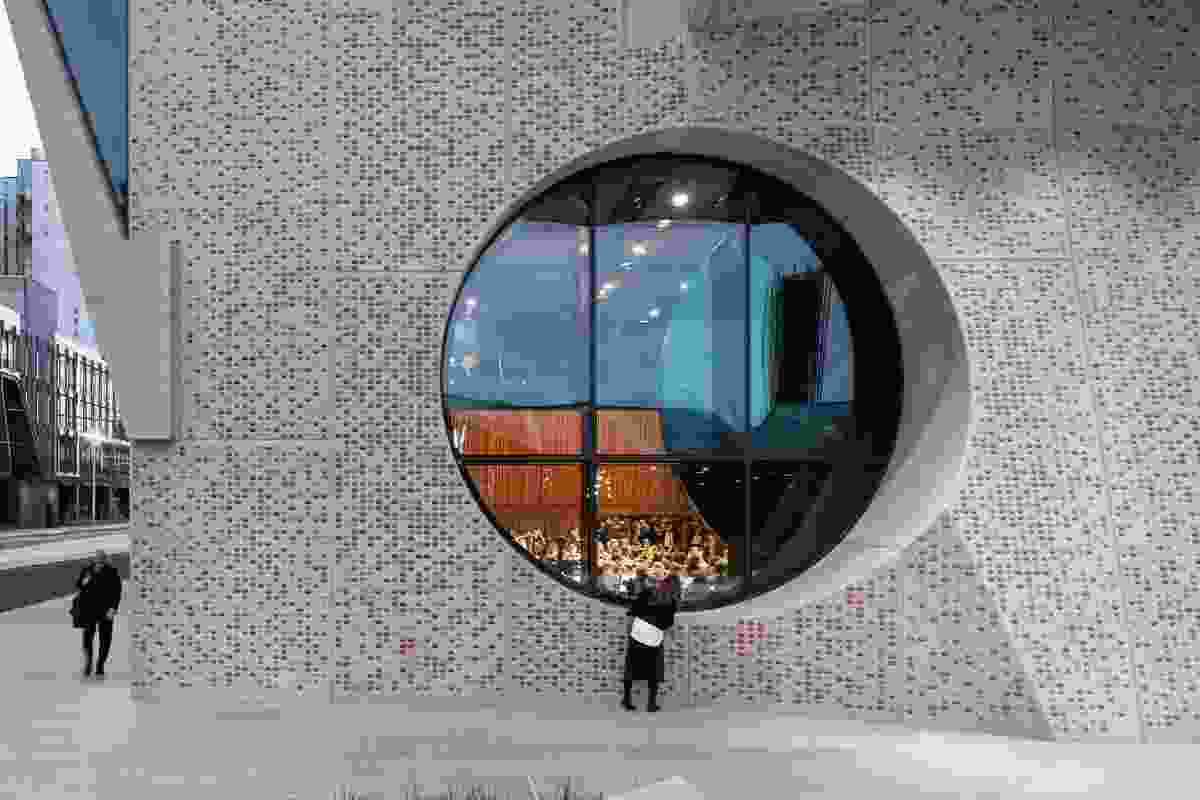 A large oculus at ground level permits views into the Kenneth Myer Auditorium. The surrounding concrete surface is patterned with tactile, domed ceramic discs that invite interaction with passers-by. 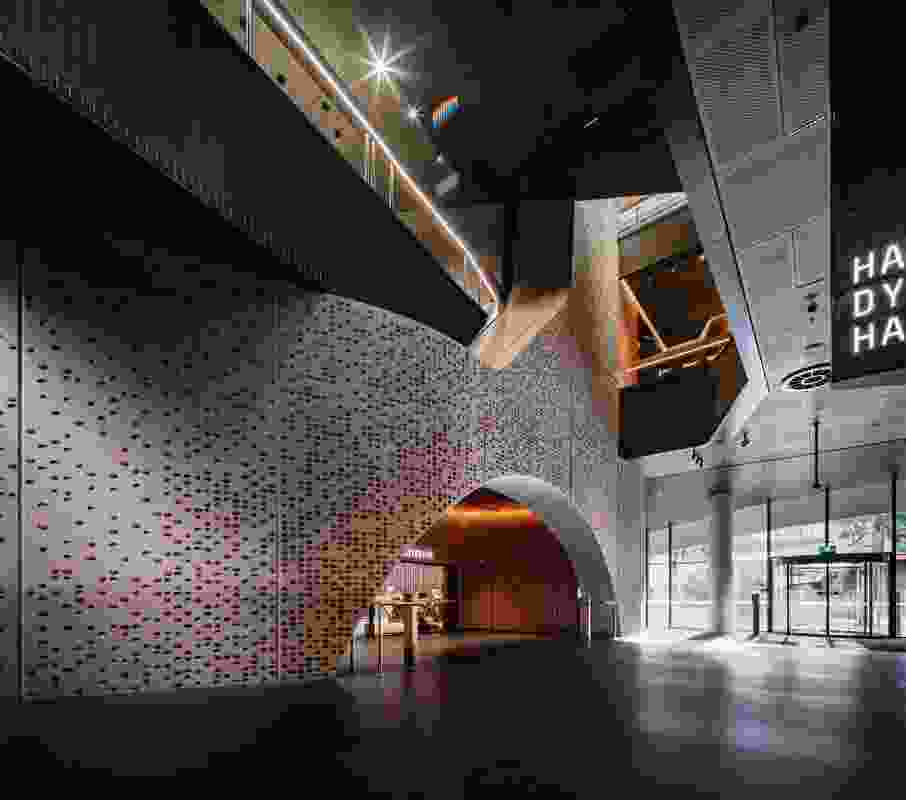 The ground floor is both civic entrance and public thoroughfare, disrupting the grounded and isolated organization typical to conservatoriums. 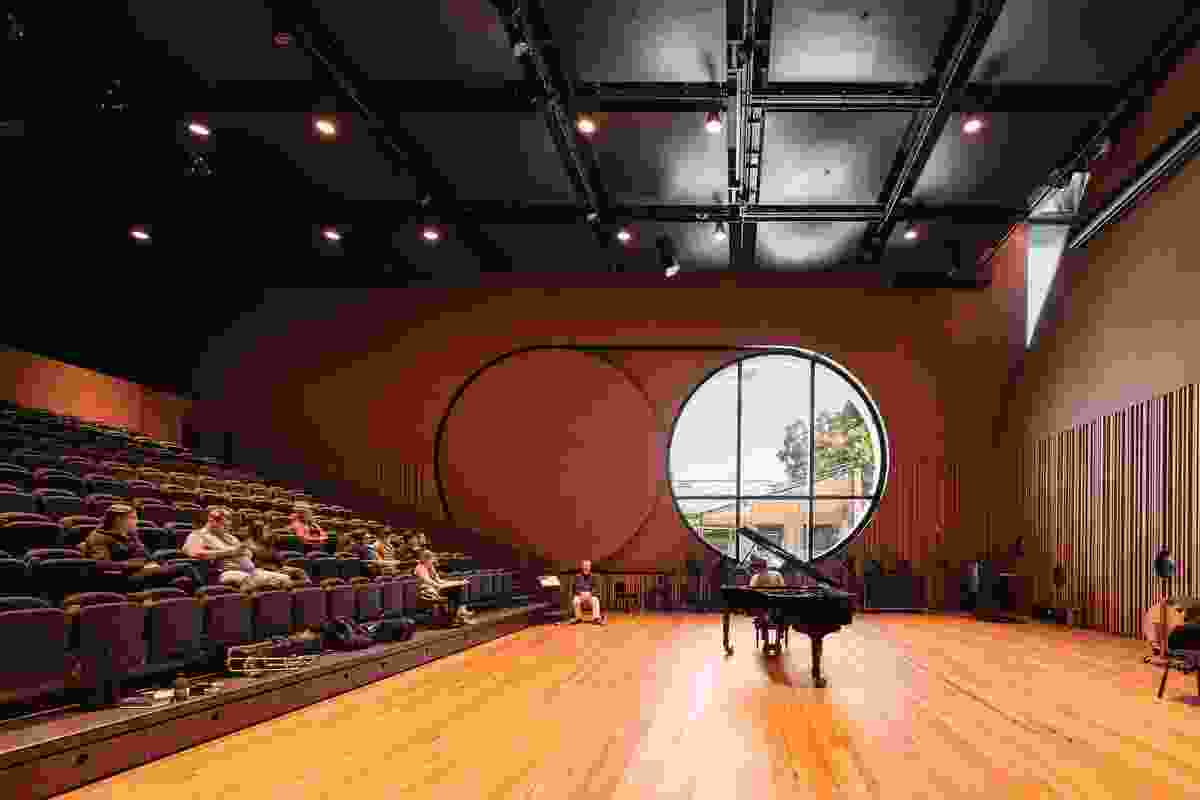 The oculus window makes public the inner realm of music practice and education. 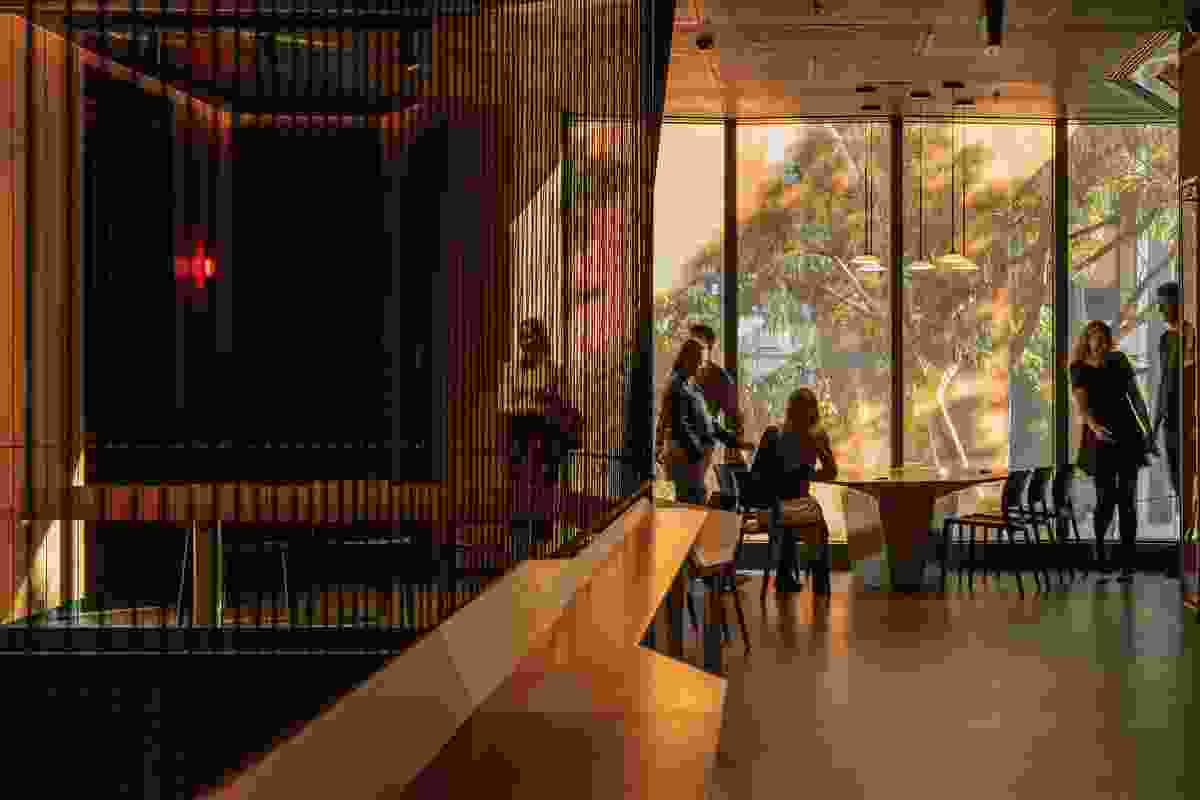 Framed openings and transparencies allow views between practice rooms, and out to the immediate and broader urban context.

A figural void allows the working life of this educational and performance venue to be revealed. 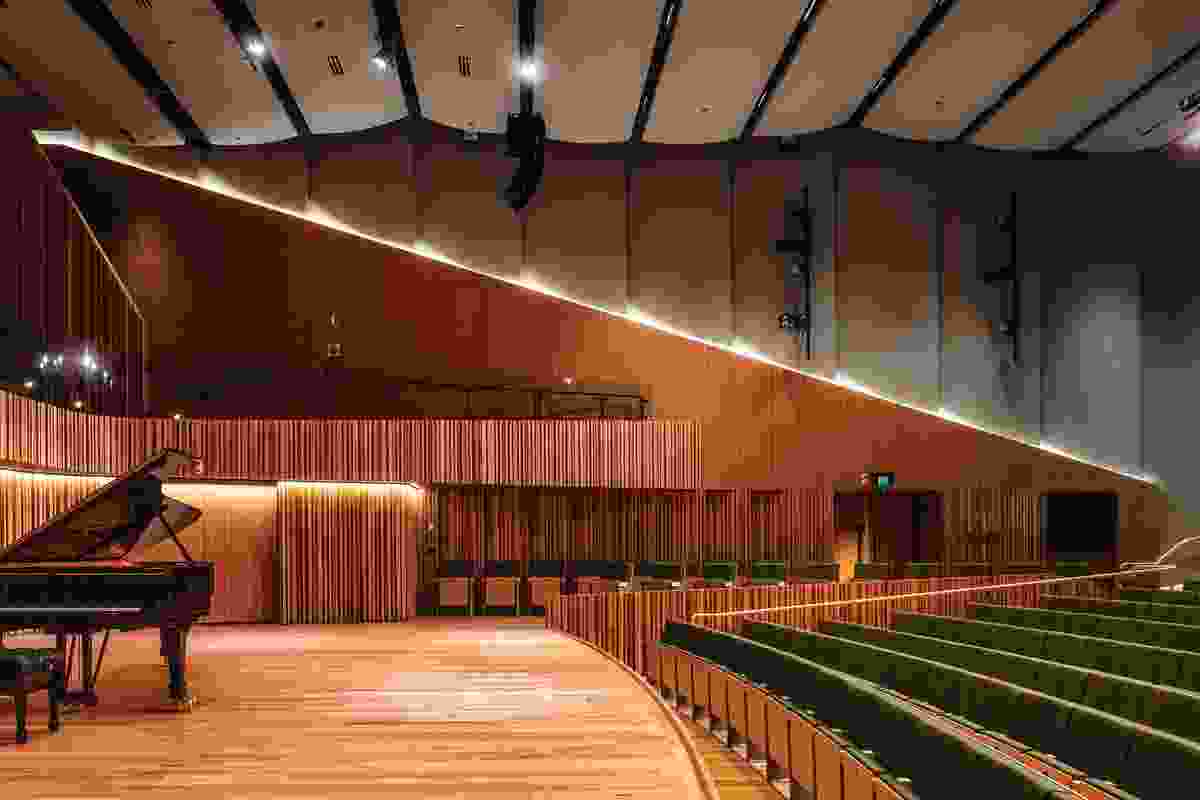 The building provides three major practice and performance venues, the largest of which is the Hanson Dyer Hall, with capacity for four hundred.