Straddling Sandridge Bridge and cascading into the Yarra River, the Hassell-designed centerpiece for 2014 Melbourne Food and Wine Festival is an inclusive space that reactivates a neglected pocket of Southbank.

The Immersery. Misters create the feeling of being being inside a cloud on the top level lounge above Sandridge Bridge.

For seventeen days, The Immersery, a pop-up space created by a team of young designers from Hassell for the Melbourne Food and Wine Festival (MFWF) puts the spotlight on a forgotten landmark. The Festival’s theme this year is water and Hassell have taken inspiration from the three states of water and responded with a three-leveled installation.

Consisting of a floating bar, kitchen, a raingarden and a community lounge, this year’s Festival centerpiece is an ambitious program twice the size of Hassell’s Urban Coffee Farm from 2013.

“Innovation is a key thing for the Festival and particularly this year, we wanted to do something completely different,” says Natalie O’Brien, chief executive of the MFWF. “We’re using spaces and concepts that haven’t been done before. The Immersery symbolizes everything Melbourne is about – the architecture, place, food and community coming together.”

The ‘cloud’ structure is the shining star of the whole design. Inspired by the vapour state of water, the semi-enclosed pavilion is made from scaffolding and 1.5 kilometres of PVC piping. Water misters blow vapour into the air, giving a hedonistic, head-in-a-cloud feel to the space.

Below on the concourse level, the raingarden responds to the solid state of water and also provides an educational element to the Festival hub. Serviced by 40,000 litres of donated rainwater, the landscaping design, which also incorporates a number edible plants, demonstrate the water conservation message that is central to this year’s hub.

According to the creatives involved, one of the challenges involved with such a visible site was the need to demosntrate the use of water more wisely, so all the waste water from The Immersery is collected and treated and released as EPA approved stormwater.

The final element is float bar, constructed from scaffolding over a barge. As a consequence of budgetary constraints, the design of the bar is a little under developed with just a stretch fabric canopy over the scaffolding. But the success of The Immersery hinges on its curated bar program – a cocktail contest between Melbourne’s best drinking establishments against the bars from around the country. As such, the place comes alive at night, with the ‘cloud’ (almost invisible by day) glowing a futuristic, electric blue, and signalling a beacon of activity at a previously underutilized part of Melbourne’s Southbank. And because of this, the unresolved architecture of the bar goes largely unnoticed.

Just as the recently redeveloped Hamer Hall has opened up connection to the river at the Princes Bridge end, The Immersery has similarly reconnected Melburnians to the waterfront, and acts as a bookend to the Southbank promenade precinct.

“That was definitely one of the things we were trying to achieve,” says Johanna Picton, a landscape architect on the Hassell design team. “We wanted to get the connection back to the water, obviously because of the water theme. This is really an unused space underneath the bridge here and to be on the water as well, you feel like you’re in Paris looking through the bridges.”

Sandridge Bridge has always been a bit of a problem child of the prime Southbank precinct. A disused railway, the bridge has had a number of false starts with its redevelopment including a design competition in 2001 that unearthed schemes such as a Ponte Vecchio-style shopping mall and a giant ferris dubbed the Melbourne Eye. Of course, we now know Sandridge Bridge to be the home of ten Nadim Karam sculptures, The Travellers, commissioned in 2005. Back then, the works clearly prioritize art and the iconic over public engagement.

Times have changed, however. In the last decade, the redevelopment of the river front, both north and south sides, all the way down to Docklands, has focused on opening up to the river. The Immersery, although a temporary installation, certainly achieves its aim of creating an inclusive public space and reconnection to the water. It demonstrates the shift in thinking regarding the design of urban public spaces. It also improves on Hassell’s Urban Coffee Farm from the 2013 MFWF, a much smaller installation, singular in its purpose, with nowhere near the pull of The Immersery as a hub.

“This is a space where you can come and be part of the Festival community,” says Natalie O’Brien. “It fits here, it looks incredible, it very much represents Melbourne and it demonstrates the huge innovation of Hassell’s team and what could be done in spaces like this.”

The Immersery is open for the duration of Melbourne Food and Wine Festival until 16 March 2014. 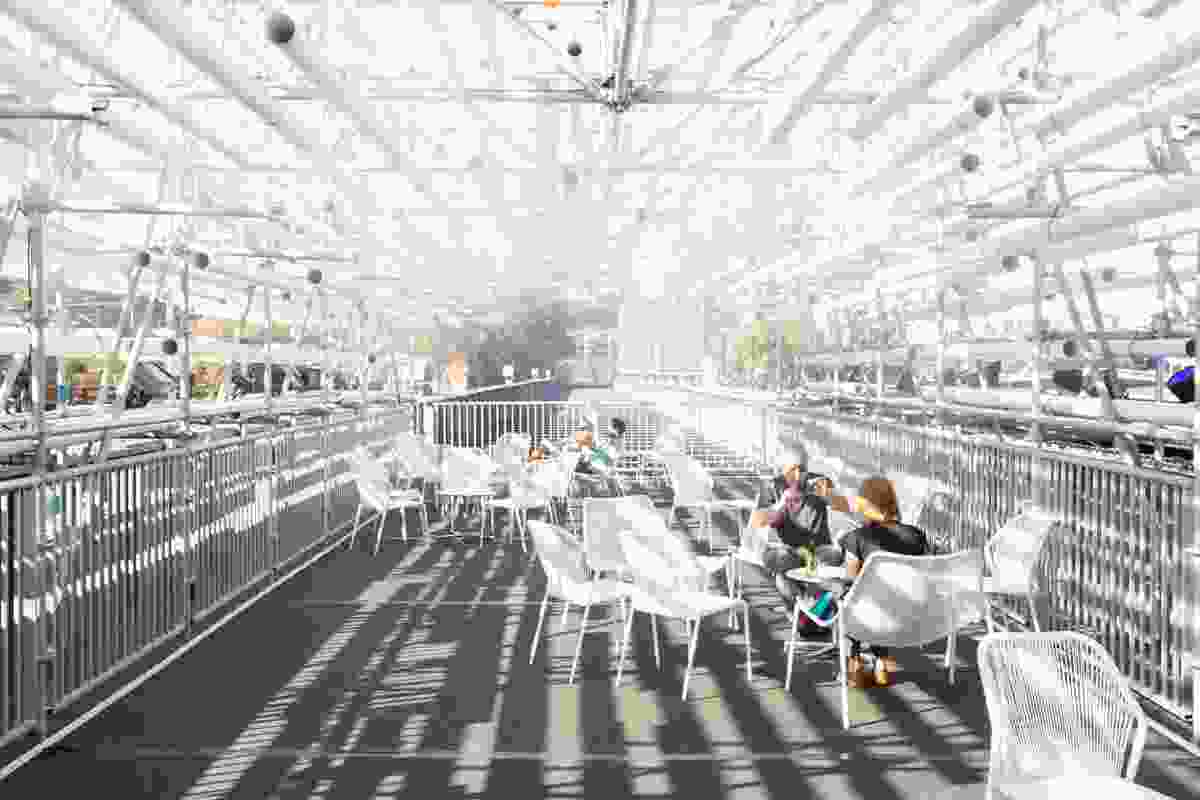 The Immersery. Misters create the feeling of being being inside a cloud on the top level lounge above Sandridge Bridge. 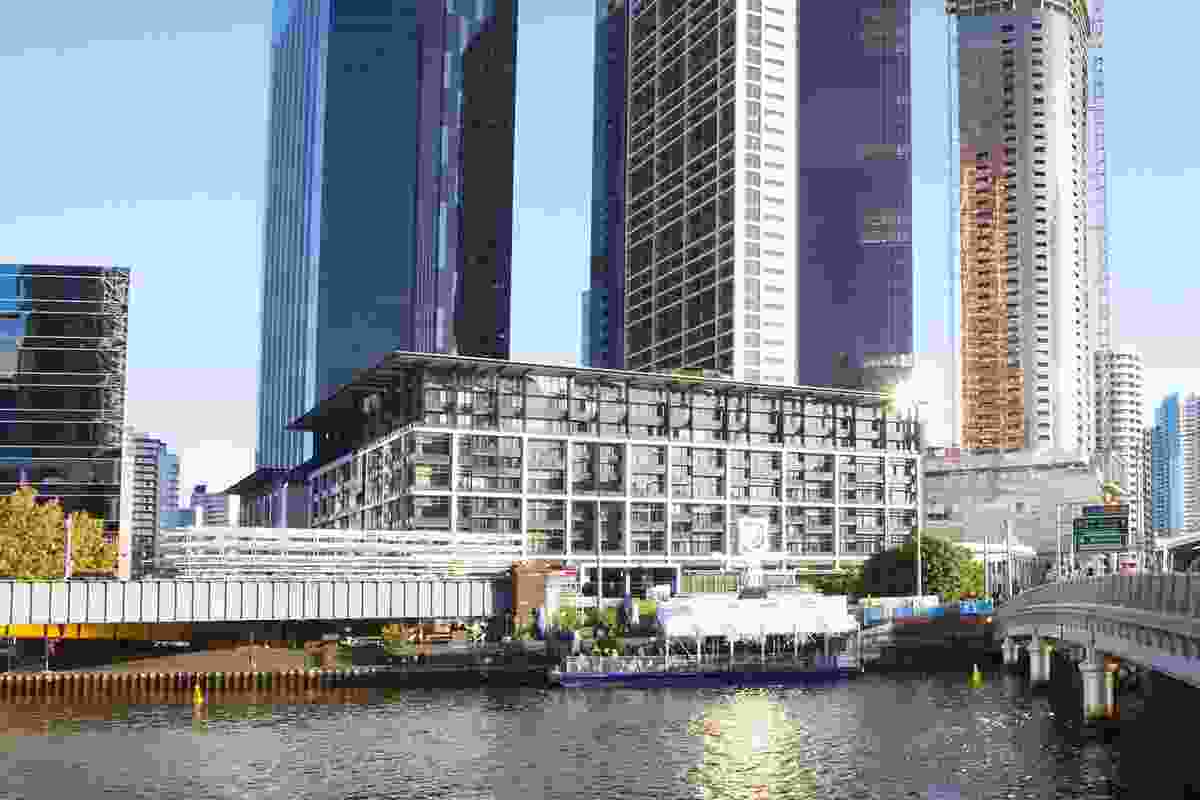 During the day, the semi-enclosed pavilion is almost invisible. 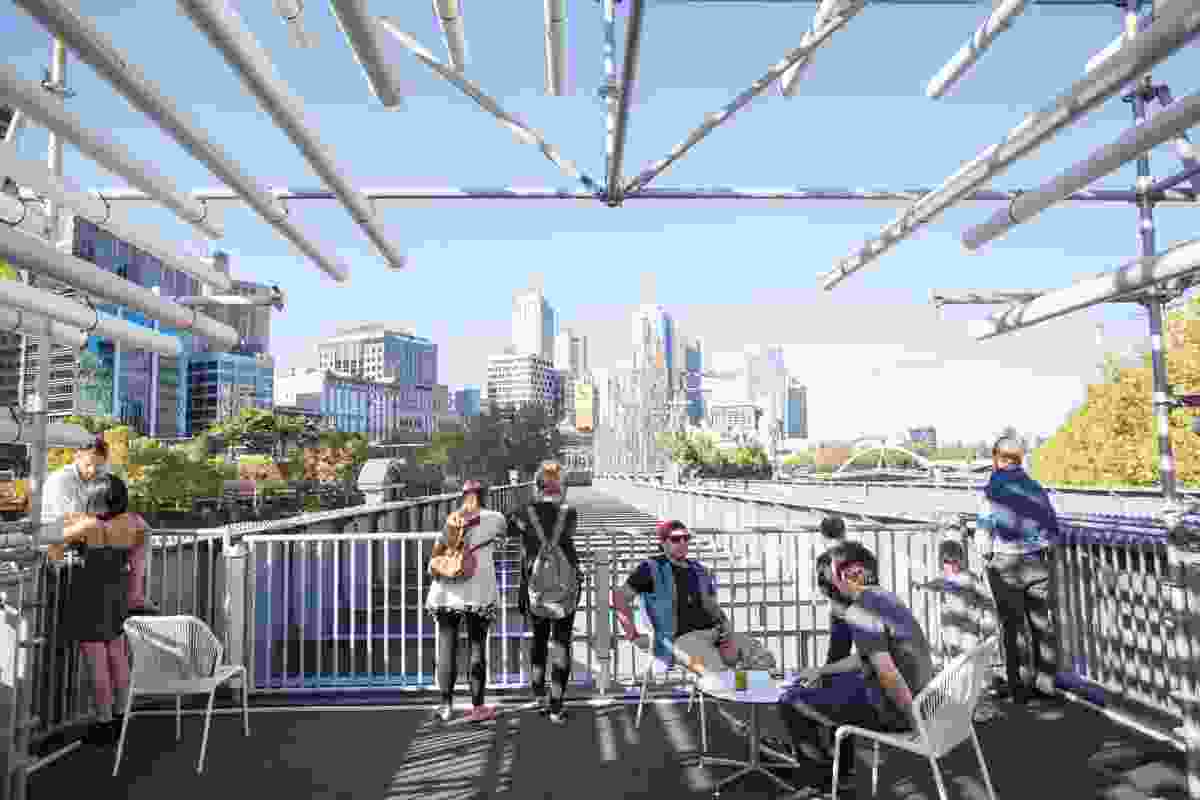 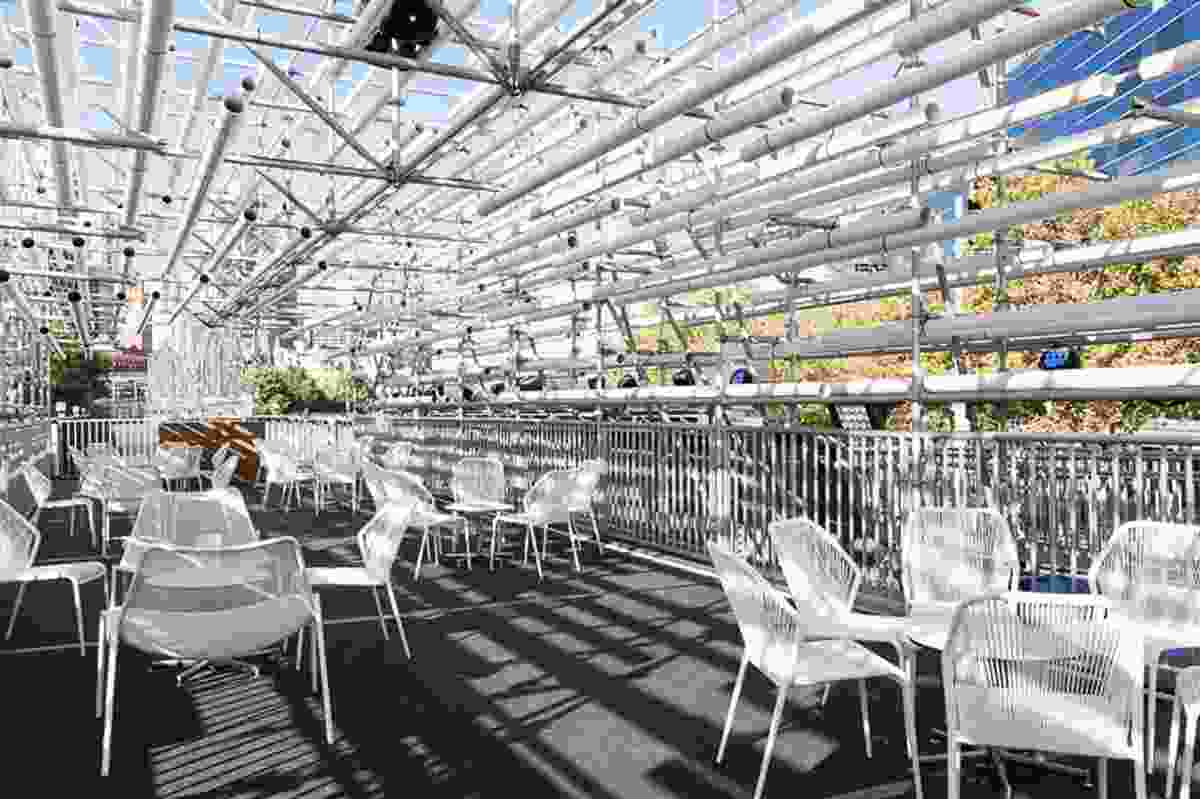 The ‘Cloud’ is constructed from 1.5 kilometres of PVC pipes which will go back into circulation at the end of the installation. 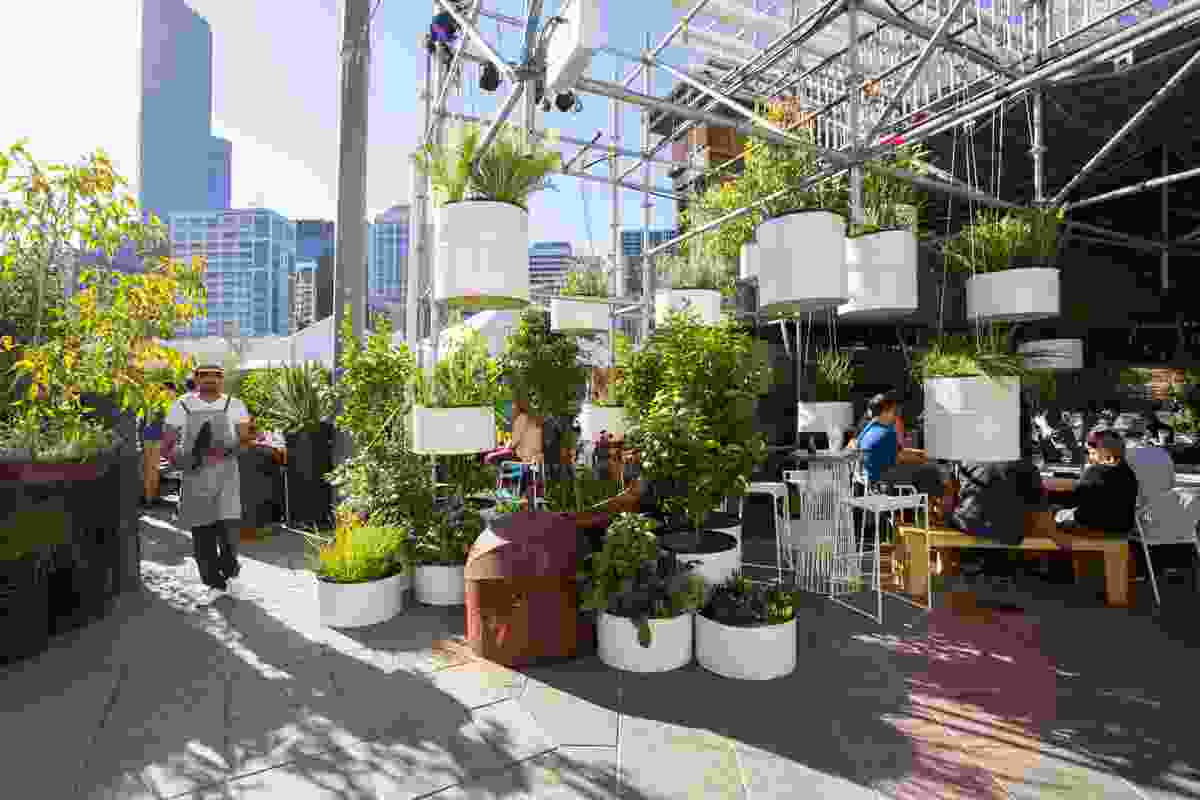 Reclaimed 44 gallon drums were used to create the raingarden. 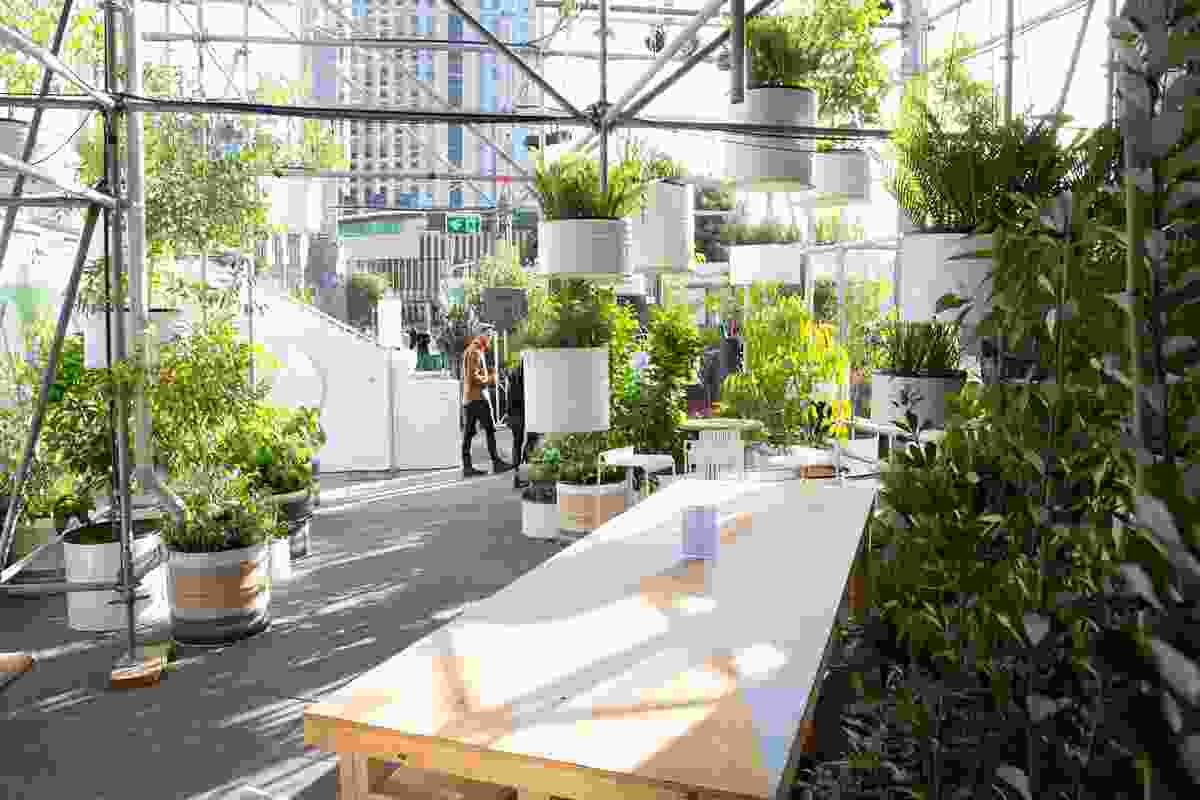 The raingarden is a demonstration of growing hardy plants in small spaces and conserving water. 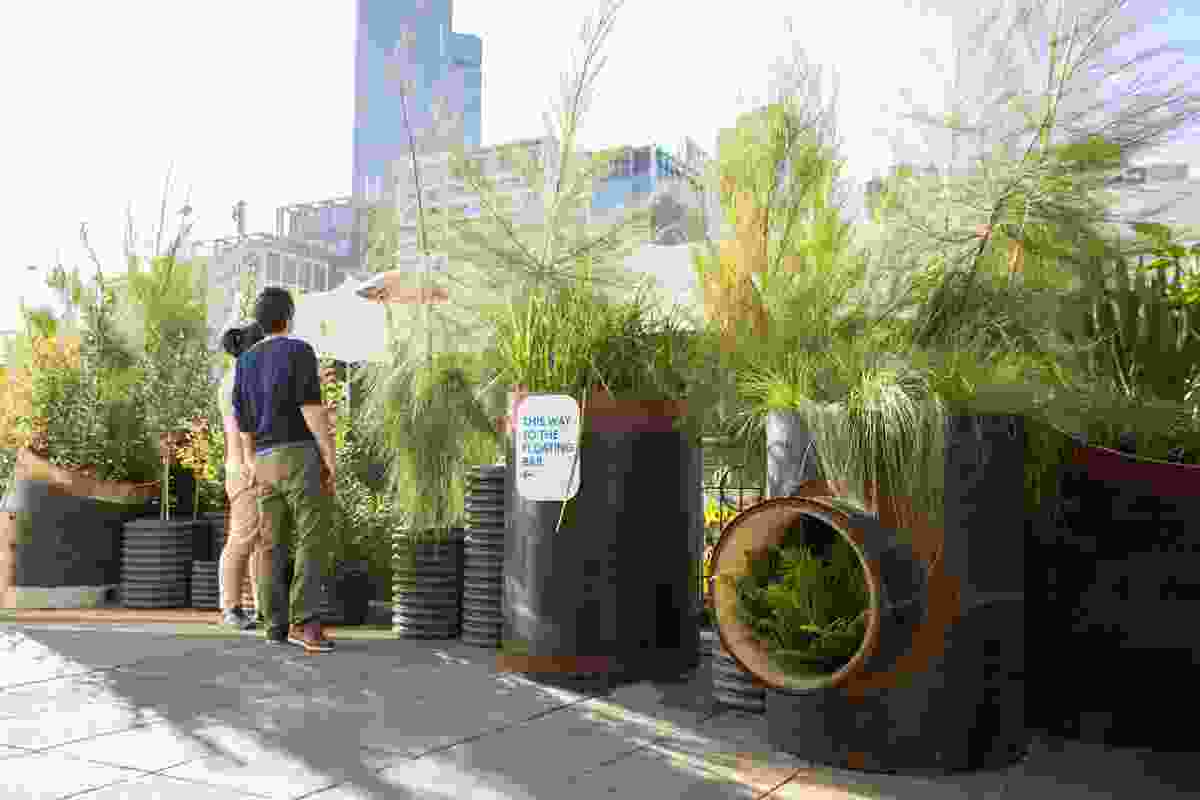 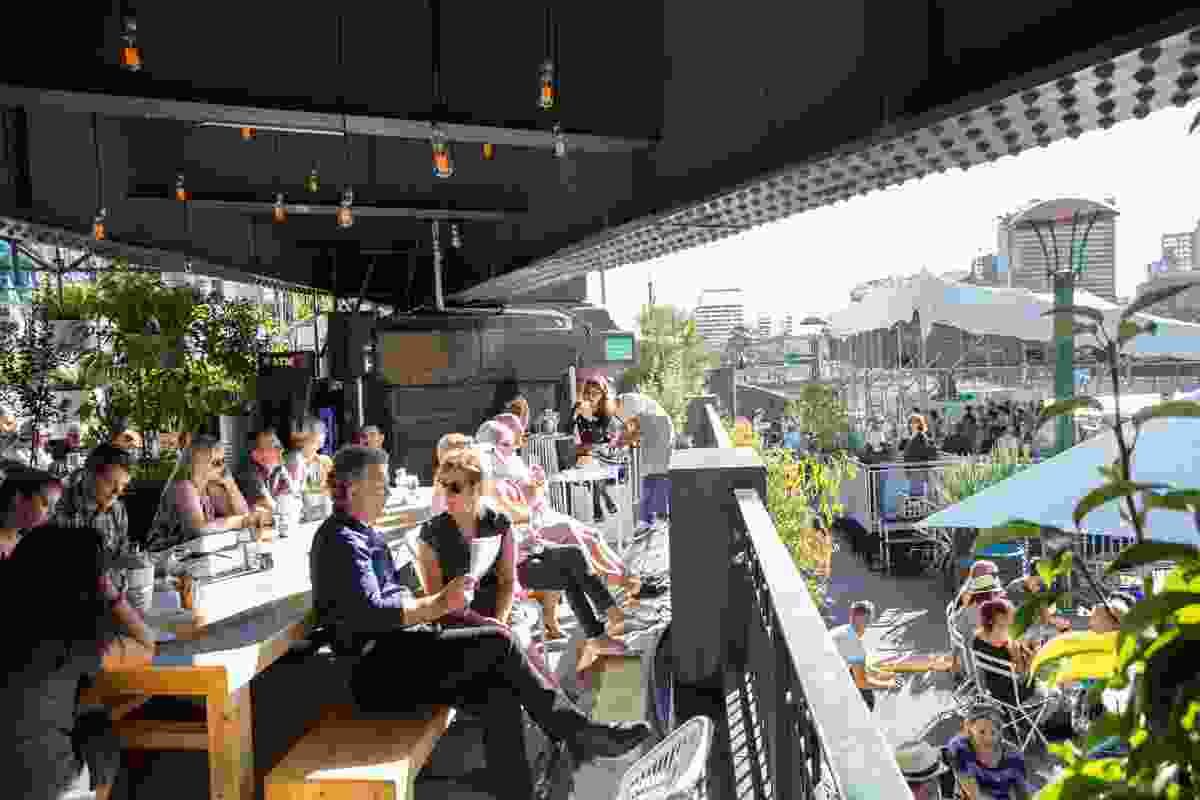 Community tables underneath the bridge overlook the floating bar which houses the cocktail bar. 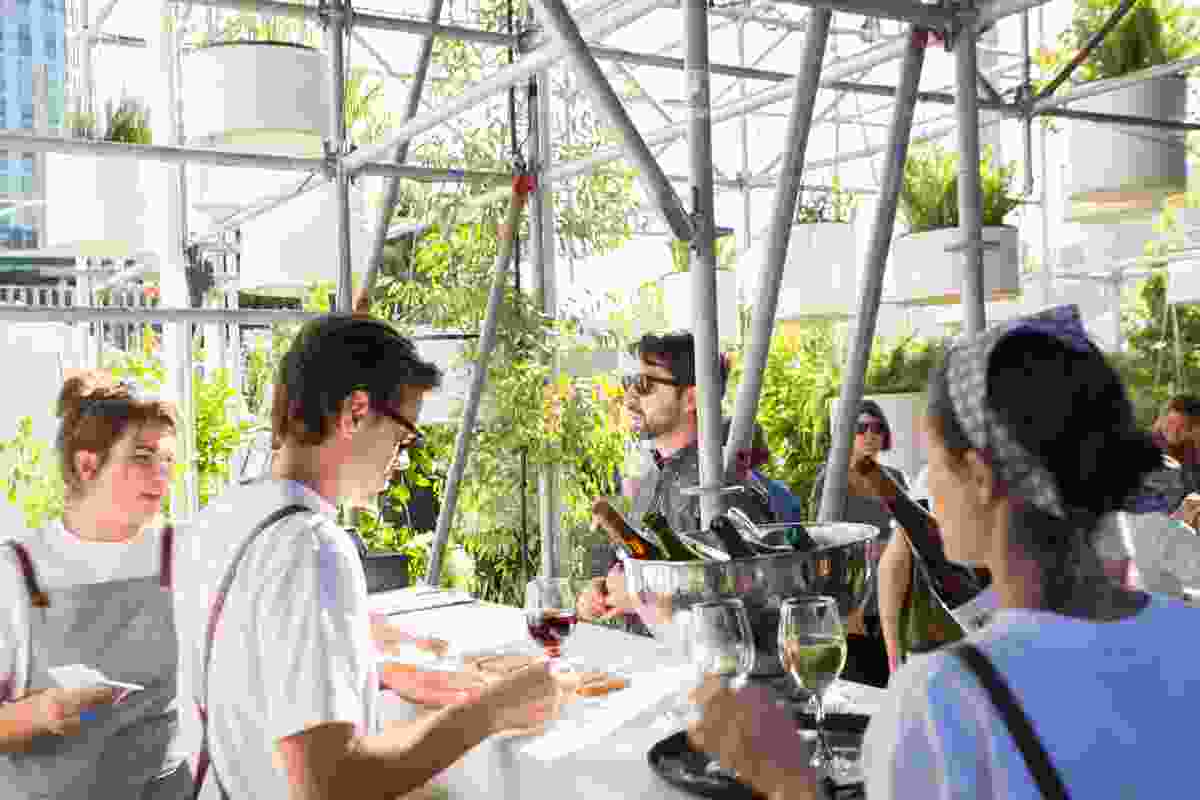 The kitchen bar at The Immersery. 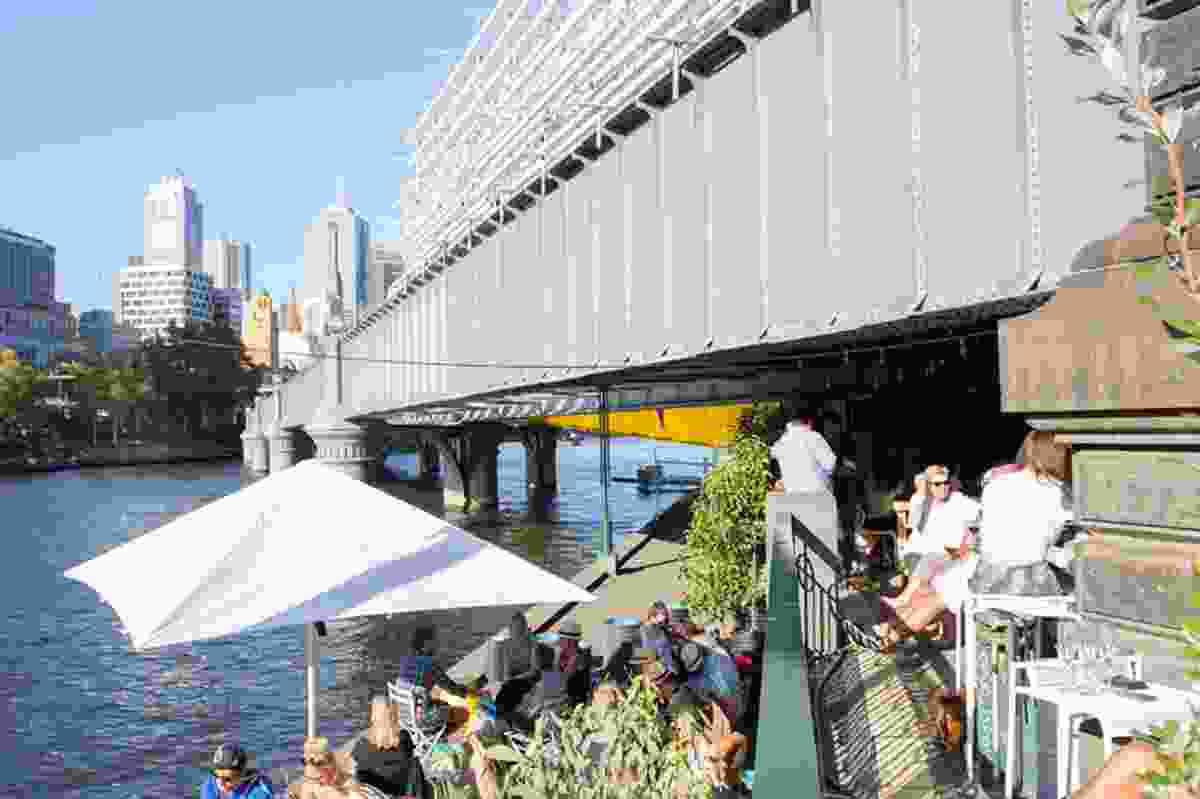 The Immersery activates the previously underutilised area of Southbank promenade underneath Sandridge Bridge. 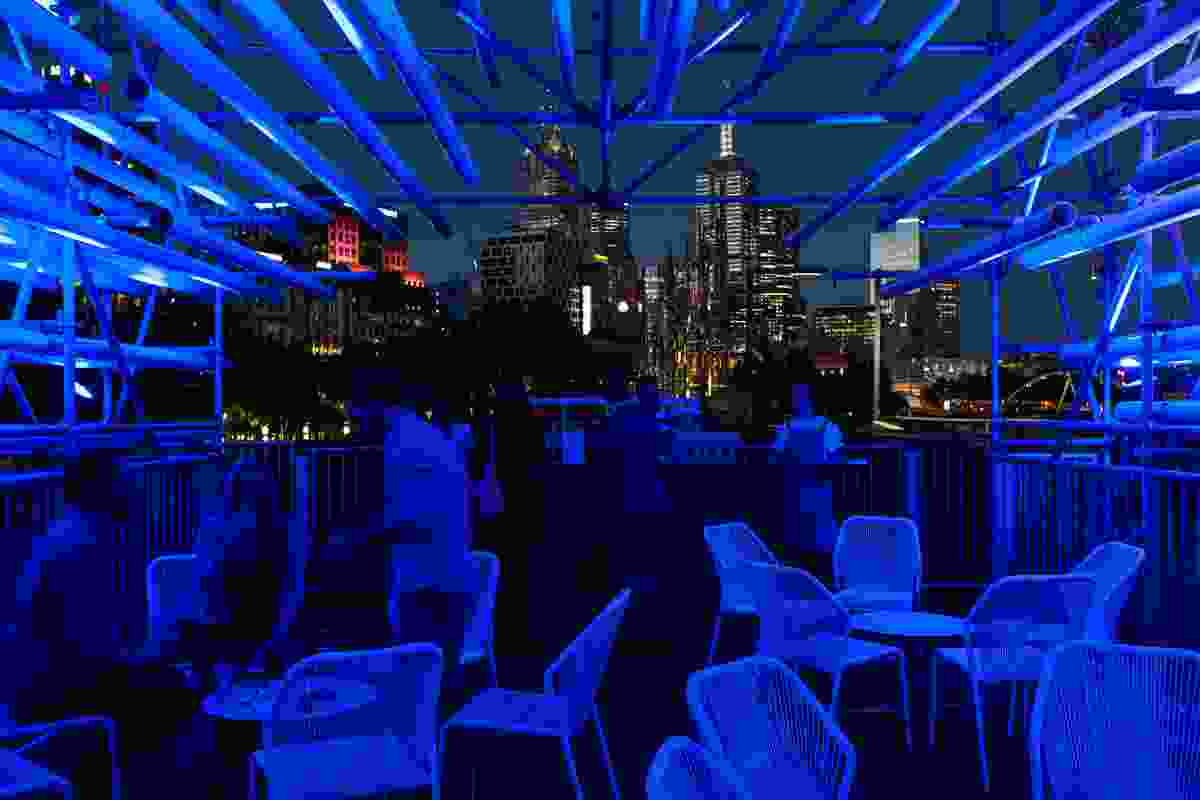 At night, the Cloud turns a futuristic electric blue. 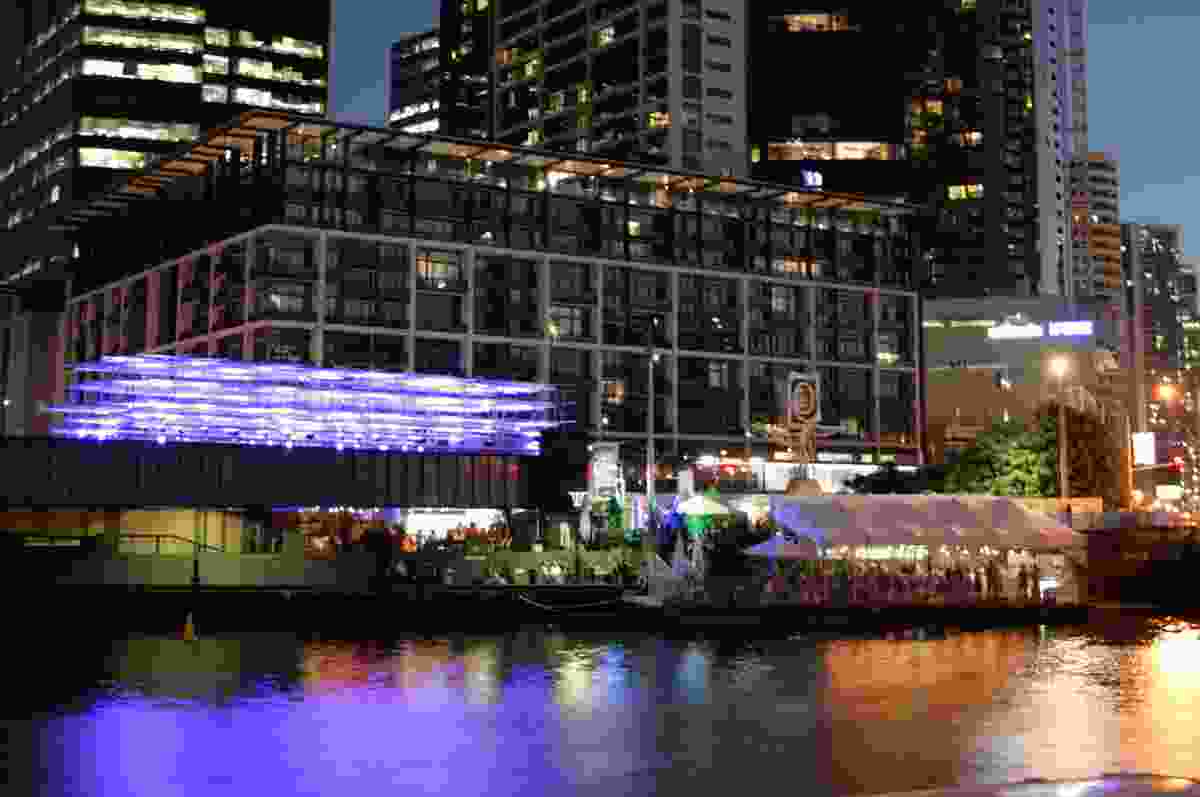 View of The Immersery from across the Yarra River. 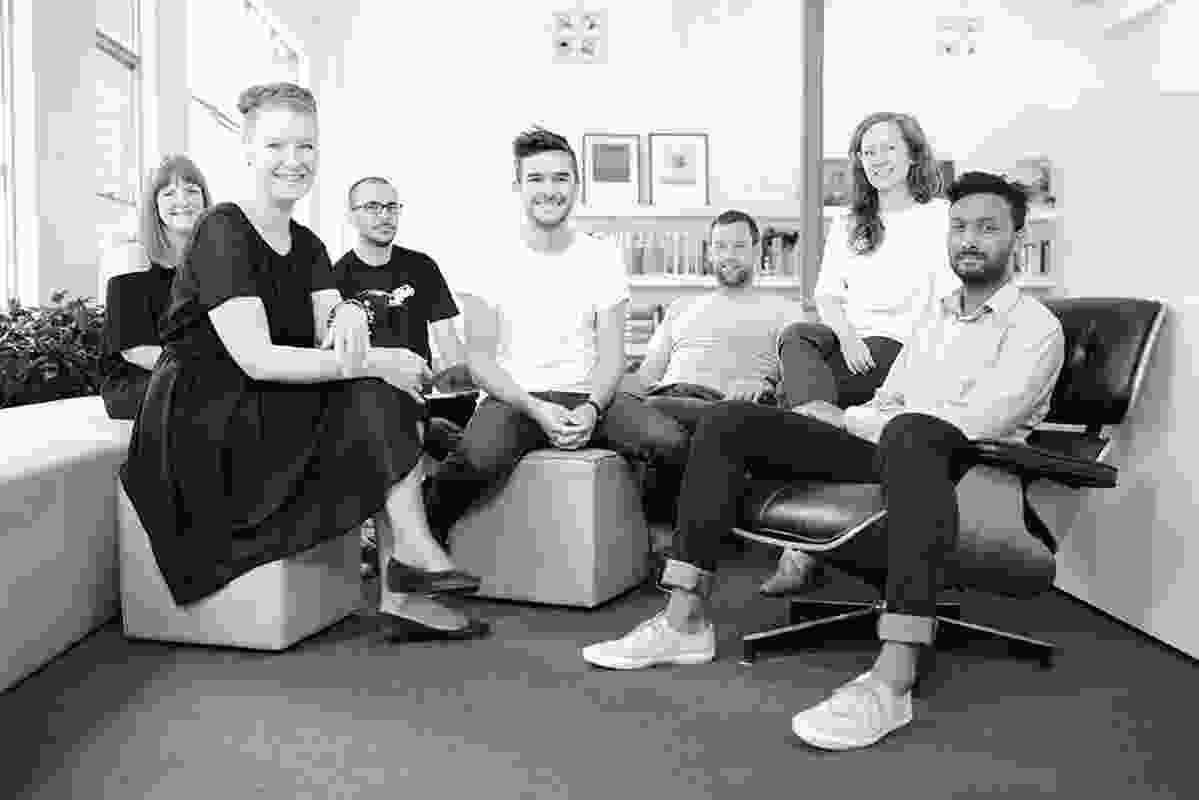