McBride Charles Ryan loops a village of learning centres around a set of courtyards, in a school building richly layered with metaphors.

The infinity symbol represents the education of both genders and infinite knowledge.

McBride Charles Ryan’s (MCR) design for Penleigh and Essendon Grammar School (PEGS) Junior struck a chord with me, particularly its haunting Hogwarts-style silhouetted facade that references the local Edwardian houses. So I had high expectations for MCR’s latest addition to the school – the Infinity Centre at PEGS Senior – and it did not disappoint. MCR has extruded an infinity symbol to create this two-storey school building, looping together a village of learning centres around two courtyards. A library sits at its literal heart, positioned at the intersection within the figure eight. Externally, the biomorphic form is articulated as a singular gesture with a different inner and outer skin. These are hitched up at two points, creating northern and southern arched entries, richly clad in red like a fleshy underbelly. Internally, the learning centres have their own distinct characters and sit on the outer perimeter wall with a looping circulation spine that connects to the courtyards and is loaded with more incidental learning opportunities. Situated on a highly exposed area within the senior campus, the fluid form not only tackles the challenges of the site, but also creates complex spatial opportunities that provide a provocative learning environment for the Year 11 and 12 students.

Configuring a series of components into a singular gesture is something of an MCR trademark, with the Legon Street Houses (1994) and the Wynnstay Road Apartments (2001) being prime examples. The Infinity Centre at PEGS Senior reads as a singular form, a gentle bow to Antoni Gaudi’s Casa Milà and a way to formally unify the different learning centres within the school. The outer public skin is handsomely clad in a horizontal banding of Euroa glazed bricks in gunmetal and black, and shimmers with the sunlight it catches at different points along its curved form. The inner skin provides a smart backdrop to the graphic landscaping of the Oculus-designed courtyards, its vertically-banded aluminium cladding offset by areas of timber.

The infinity symbol motif works on a number of levels. Graphically, it references the school’s logo. PEGS is an amalgamation of two schools – Penleigh Presbyterian Ladies’ College and Essendon Grammar School – and its logo features two elliptical emblems linked together like an infinity symbol. The symbol is also a compelling metaphor for the experience of these Year 11 and 12 students – it speaks of infinite knowledge, or the accumulation of knowledge as continuous and ongoing. It is also a representation of a union between the male and female students, who, for the first time during their schooling at PEGS, are studying in a coeducational environment.

The site, in Keilor East, north-west of Melbourne’s CBD, came with some challenges – it is exposed to horrific wind conditions, and is an awkward shape. The brief called for a building that would cater for six hundred year 11 and 12 students, and house a variety of specialist and standard classrooms, a lecture theatre, a cafeteria, breakout spaces, facilities for general teaching staff, a range of amenities and a library.

MCR’s solution was to zone the various facilities into “village types” within the infinity symbol-shaped building. This harks back to a “walled city” type, and the scholastic traditions of the cloister model; MCR wanted to create an aspirational place for the students as they prepare for life beyond school. (The cloisters also provide protection from those ghastly winds.) The “walled” precincts include the Sculthorpe art precinct, the Kngwarreye science precinct, the Hollows general-purpose classroom precinct, the Singer library/language wing and the Blackburn administration precinct, which are located along the perimeter wall.

Although encased within a singular external skin, internally each precinct has a distinct character. The architectural challenge of merging the differing spaces was well met – from the bubblegum-pink and apple-green science labs, to the luscious red lecture theatre richly clad in Tasmanian blackheart sassafras timber, to the curved in situ concrete staircase clad in shimmering blue mosaic tiles that leads students to the deep purple- and blue-toned locker areas, to the timber-strutted ground-level breezeway facing onto the courtyard. With their internally expressed skillion roofs and highlight windows, many of the classrooms are also a reminder of the old light timber construction (LTC) schools designed by Percy Everett and others for the Public Works Department in Victoria in the late 1940s. However, the Infinity Centre classrooms are far more spatially and materially generous and are punctured by irregularly formed skylights.

While many contemporary schools have adopted more open and flexible learning spaces – like Fitzroy High School, also designed by MCR – PEGS prefers a traditional “chalk and talk” mode of learning with separate classrooms, and indeed the brief called for relatively fixed learning spaces. Pushing the limits of the brief, MCR has created an opportunity to provide fluid spaces within the corridor. The breakout spaces, gallery spaces, contemplation spaces and areas for students to meet create a sense of journey along the loop, and visually connect students back to the courtyards. The result is a design that provides the best of both worlds in terms of pedagogical spaces. Vice principal and school building committee member Nina Bilewicz says “the building works tremendously well,” and is delighted to see the students “use the building so intuitively.”

The central positioning of the library is also successful. As you walk around the knowledge loop, you find yourself returning to the library. Rob McBride describes the library as a storehouse of information, a place where the knowledge from the other precincts has been gathered together.

The library is the only “static” part of the building and is expressed with its own distinct language – an infinite array of hexagonal motifs that extrude down from the ceiling at different heights.

The Infinity Centre at PEGS Senior picked up a commendation at the 2012 World Architecture Festival and will probably become an international benchmark for secondary school buildings. It is another great school building by MCR, made more impressive by the knowledge of the budget constraints of a secondary school project. It is an ambitious form that provides many engaging spatial opportunities and which is layered with rich texts and metaphors.

When I asked Bilewicz why MCR was selected from the invited shortlist, she explained: “MCR were the only ones that gave us what we wanted plus a whole lot more.” This is the definition of good architectural practice. Certainly, the astute architect’s eye may disdain the few missteps that one encounters along the journey to knowledge, but evidence of the success of the building surely lies just a little with its users and very happy clients. The fact that the school named the building the Infinity Centre is a good sign, as is the adoption of the infinity symbol as an emblem on the school tie. But most importantly, as Bilewicz explained, “the energy between the students and the building is remarkable and exciting.” 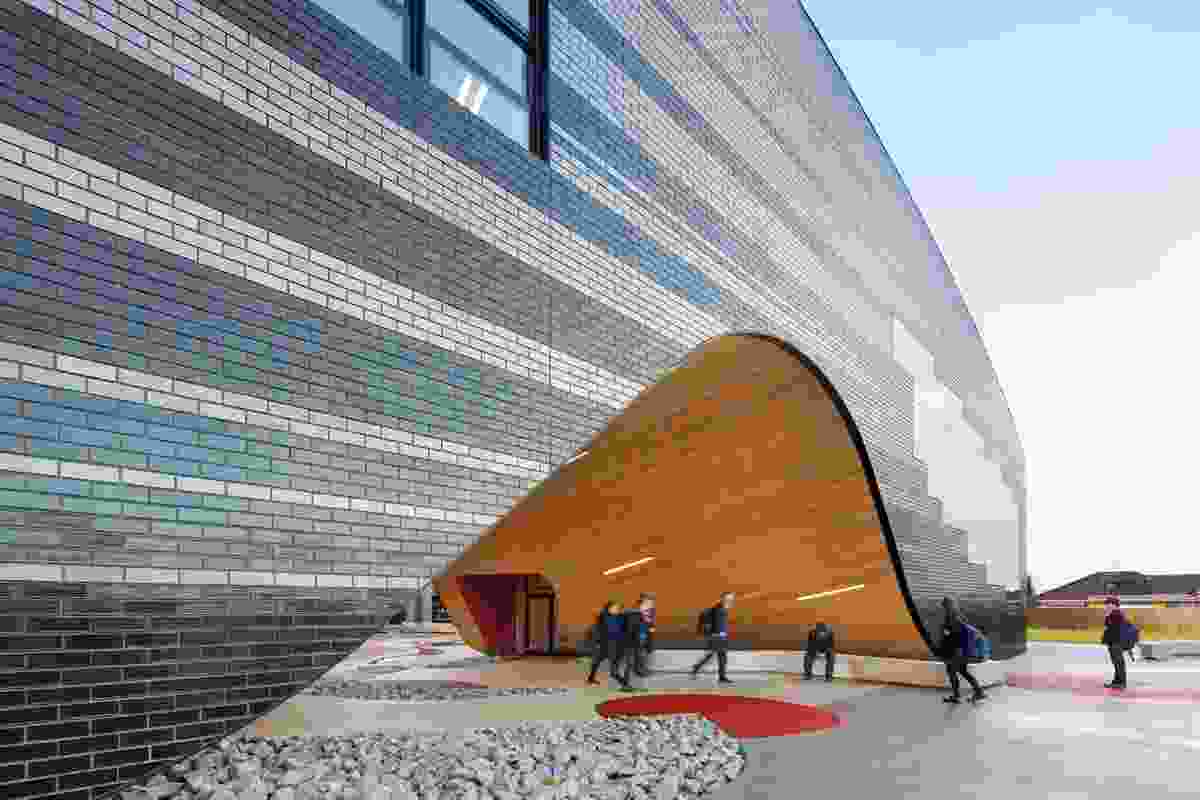 The infinity symbol represents the education of both genders and infinite knowledge. 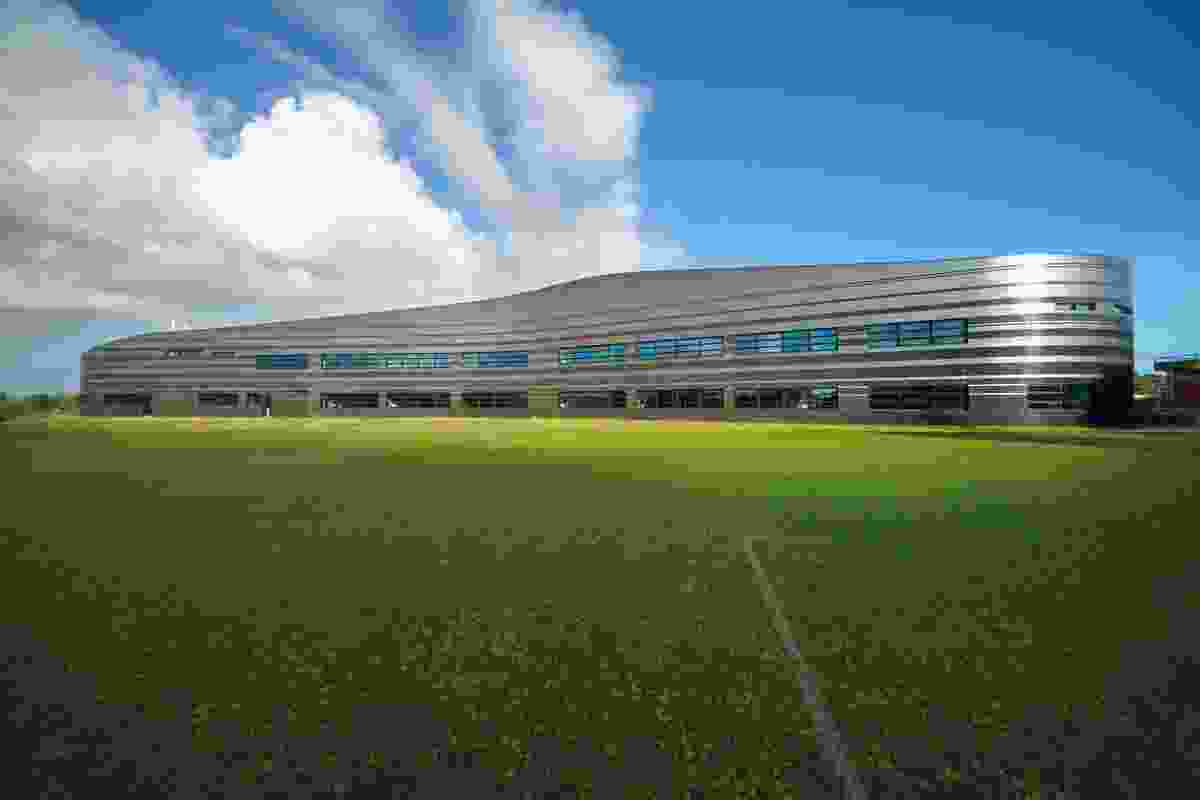 Learning spaces are looped together to form a singular, curved expression clad in glazed bricks. 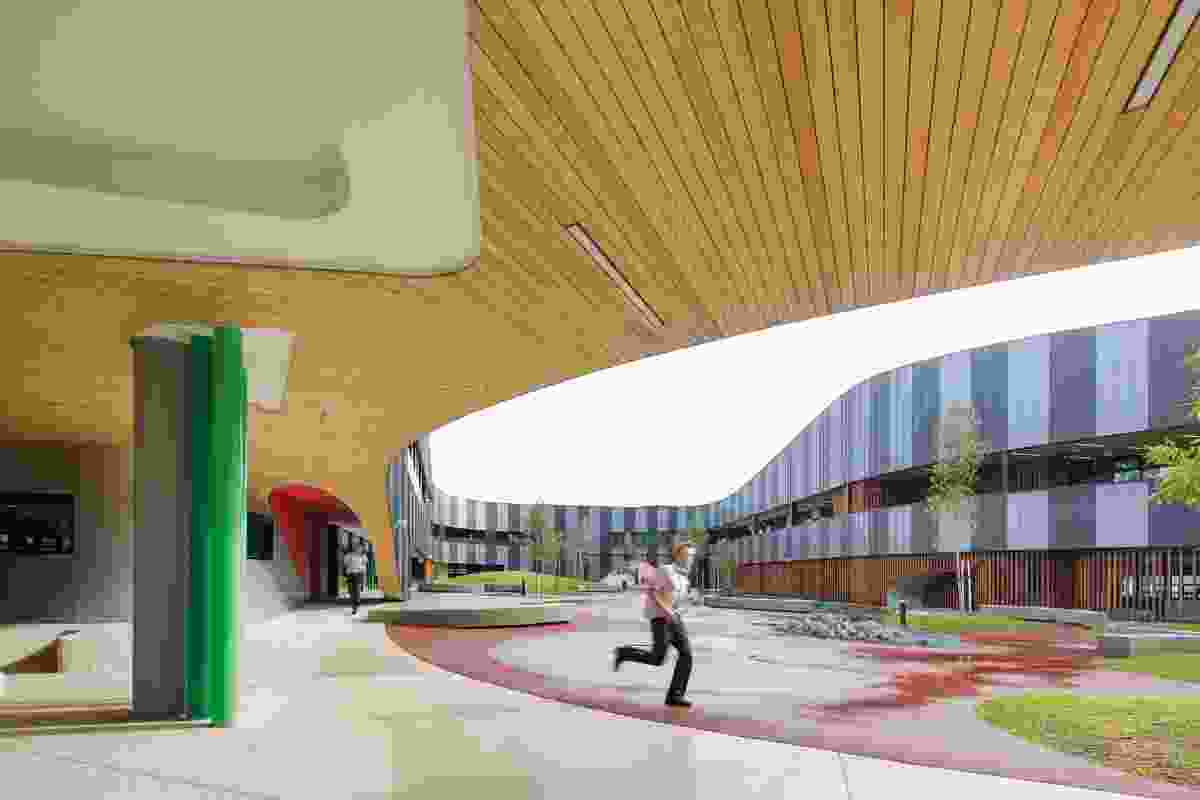 A timber-strutted breezeway opens to a central courtyard designed by Oculus. 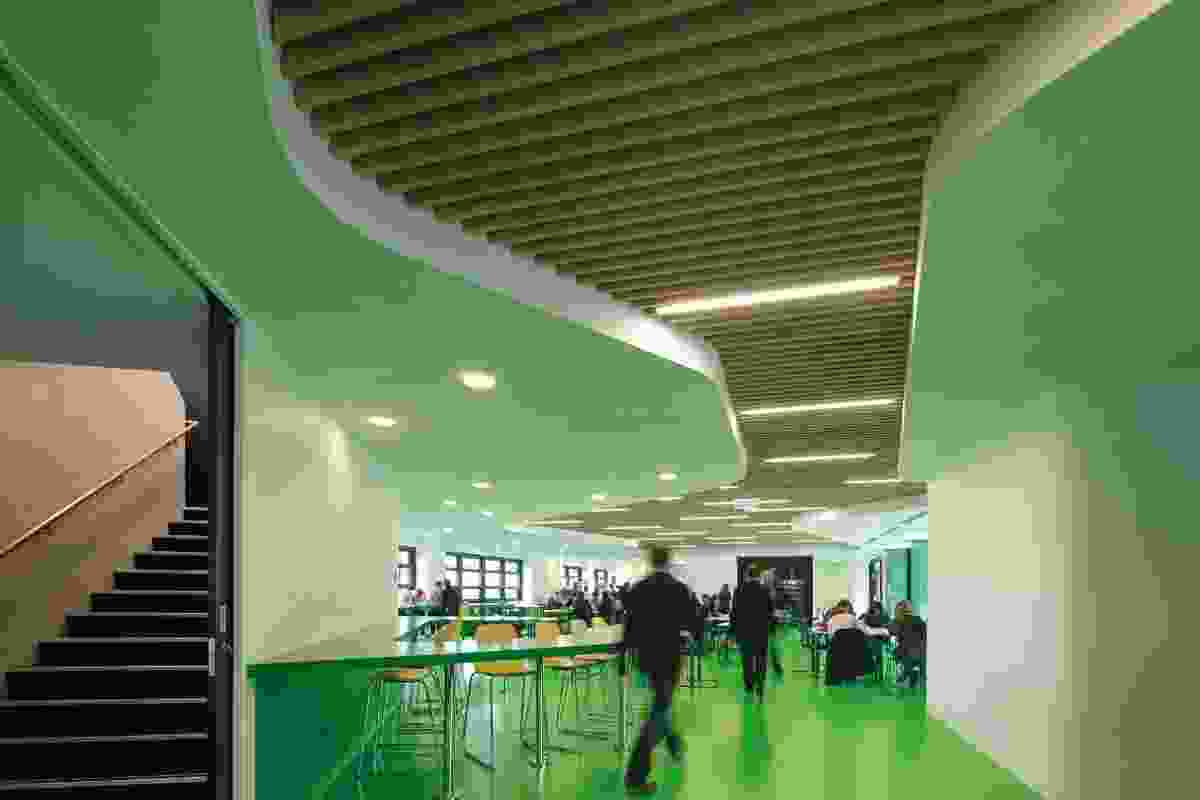 Each precinct has a distinct character emphasized by colour. 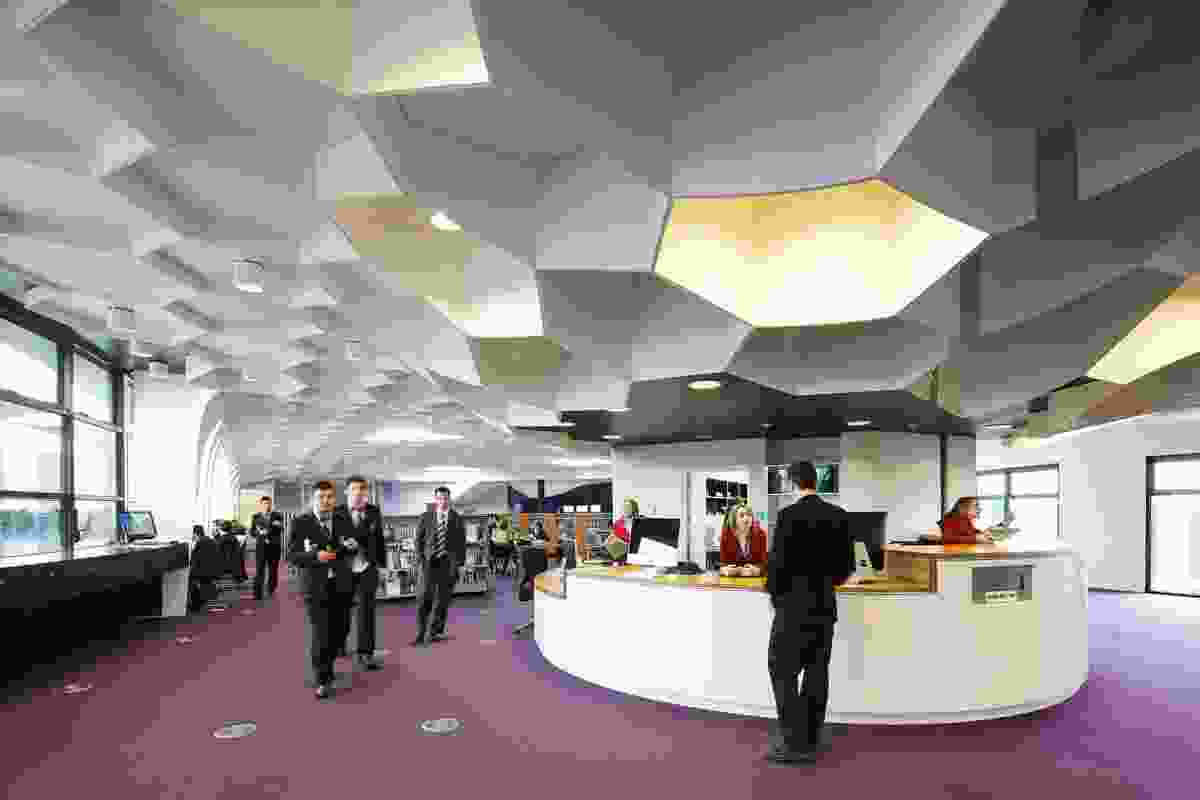 An array of hexagonal motifs extrude down from the ceiling in the library. 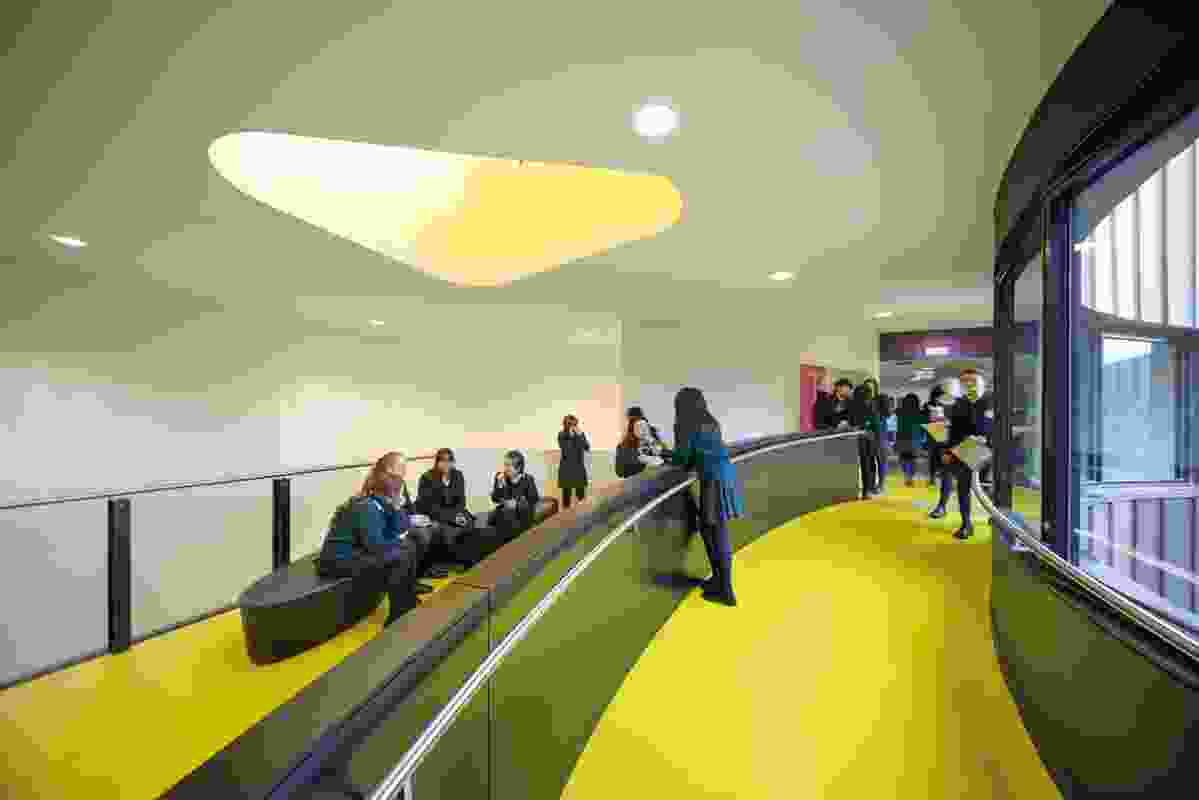 Breakout areas along the “knowledge loop.” 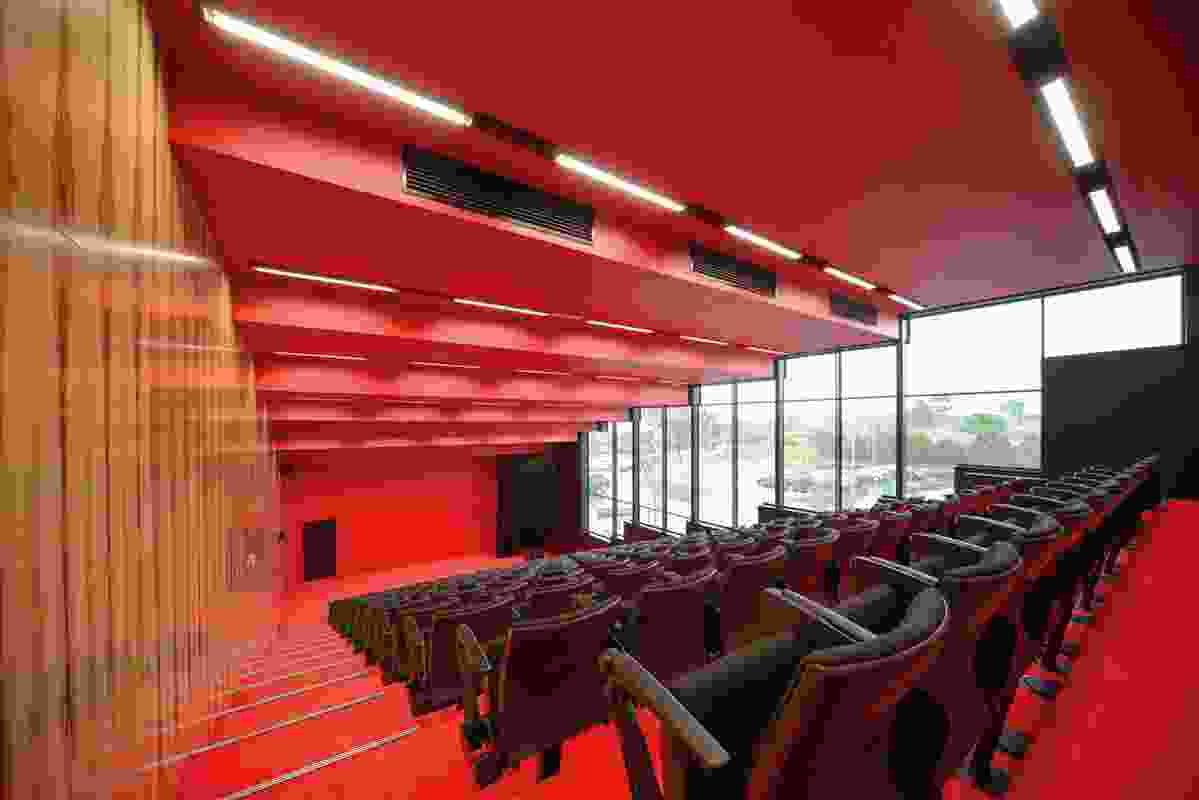 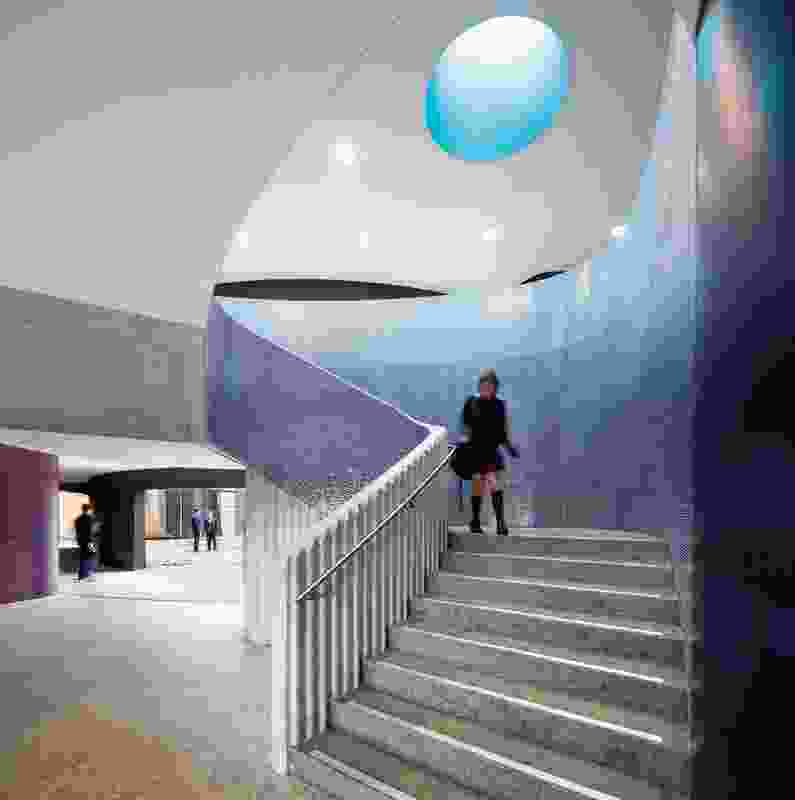 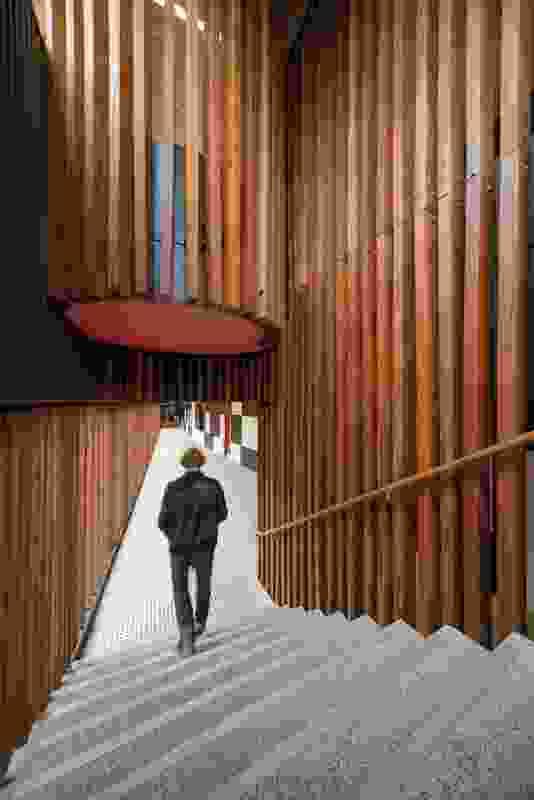 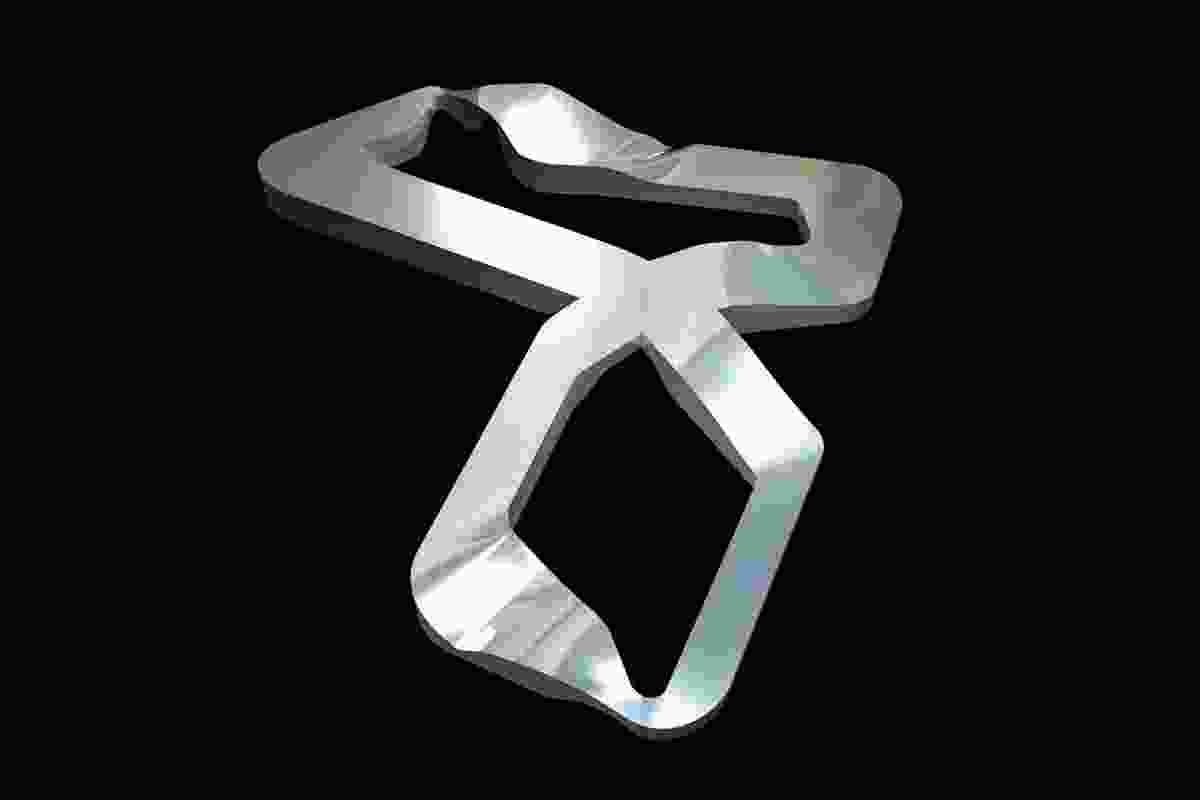 The shape created by the learning spaces that make up The Infinity Centre.