The Majestic Theatre building has been modified many times.

Examples of Australia’s once-rich collection of twentieth-century cinemas are likely to have faced decades of neglect followed by either demolition or conversion. A few of the major Golden Age cinemas in the cities have survived intact, either as live theatre conversions or as multi-use performance spaces, but in the suburbs such uses are not viable. Along the sometimes derelict suburban shopping streets, either the monumental presence of the old theatres has vanished, or their once-grand internal spaces have been divided to accommodate small-screen multiplexes, or new residential or commercial uses.

None of these uses allows any appreciation of the excitement that was originally generated by the movies, where a thousand people would gather in the dark after a procession through a series of foyers and stairways designed to instil a sense of wonder and other-worldliness. Even large-volume spaces like supermarkets don’t preserve even a hint of this world, which was once so fundamental to our communities.

The Majestic Theatre building, in Sydney’s inner-western suburb of Petersham, has followed part of this trajectory, starting as a big but not-too-lavish 1920s suburban theatre, the free-style classical design of which was made over in art deco style in the 1950s by noted cinema architect Guy Crick. When TV decimated cinema audiences in the 1960s, the building became a roller rink, and later a nightclub, then it lay vacant while traded by a series of parties until it was acquired by a small developer.

Here its fate became significantly better than that of many other twentieth-century cinemas, because the developer hired an architect able to match design and material quality with the commercial returns required for a multi-unit residential project – a task of extreme difficulty …

Here its fate became significantly better than that of many other twentieth-century cinemas, because the developer hired an architect able to match design and material quality with the commercial returns required for a multi-unit residential project – a task of extreme difficulty, as the array of generally disappointing mid-rise apartment buildings in Australia proves.

Hill Thalis principal Philip Thalis says the practice’s “pack and stack” approach to the Majestic was fundamental to the success of the project. The practice “worked hard on every single centimetre” within the generous volumes of the building, fitting in a maximum number of compact units. These are an ingenious array of one- and two-bedroom apartments, no two of which are alike, laid out over three levels with the ground floor remaining for retail. This layout met the commercial and statutory parameters for the development, while still leaving significant spaces where the original volumes and finishes can be appreciated, and which offset the often-constrained circulation corridors.

The two atria, at either end of the main range of apartments and accessing the two circulation levels, are the key internal elements of the project. Here daylight, patinated surfaces and reconstructed natural ventilation make spaces that are almost civic in their presence, reaching up to the conserved original ceiling and its dramatic timber and steel trusses. It remains to be seen whether the building’s occupants feel entitled to colonize these spaces as communal living areas – a use for which they would be ideal, with their balconies and vistas of outside and through the quirky interior. A few deckchairs, courtesy of the body corporate, would be enough of a catalyst for this.

The minimum-sized apartments themselves are simple and well planned, some opening to a series of mesh-enclosed miradors facing west, some surprisingly well lit from a reflective boundary wall that bounces the sun into the balconies and living areas. It is noteworthy, on this and many other projects, that the New South Wales Department of Planning’s State Environment Planning Policy (2002)1 has set a benchmark for the size, liveability and environmental performance of all multi-unit developments, one of the few real successes of state government planning in recent years, and one whose benefits will be felt for many years to come.

The Majestic’s apartments have simple, clean lines and generally well-planned spaces, apart from a few hard-to-furnish square living/dining rooms. The stylish, contemporary feel seems to reflect the culture of the occupants, who appear to be a mix of young couples and singles enjoying the vibrant inner-city strip on which the building is located. Some concessions to privacy are made to improve views and openness, as there are many places where the interiors and balconies can be overlooked, but as Thalis says, there are always spaces where the shy can retreat from view, while the extrovert can enjoy the busyness of the city.

The miradors provide the major external modification to the Majestic, creating an enfilade of volumes built to the boundary along the western lane. They perfectly suit both the character of the tough original exterior and the consistent semi-industrial detail of the new work.

The miradors provide the major external modification to the Majestic, creating an enfilade of volumes built to the boundary along the western lane. They perfectly suit both the character of the tough original exterior and the consistent semi-industrial detail of the new work. Externally the building’s major original features have been preserved and enhanced, including the painted sign on the corrugated cladding to the rear, which has been cleverly modified to become sliding window screens. The interesting free-style classical/deco facade is conserved – entry doors, tiles, signs and all.

From the street, the entry is through a small lobby past the original scarred timber fire exit doors, into a tall, bare concrete space through which the inaccessible remnants of an old concrete exit stair wind. Residents take the lift or a galvanized mesh stair to the main circulation level above, starting at one of the two atria which structure the Majestic’s interior.

Elements of the original cinema and the roller rink, which Thalis calls “trophies,” are reused throughout the common areas of the building. The entry lobby is lit by the salvaged sign that reads “Roller Skating,” while red-painted steam radiators line the atrium walls and a fascinating handwritten signboard lists all the things that could have led to you being thrown out of the rink. These items of “moveable heritage” have been carefully placed and conserved, and at a low cost provide not only a lively series of “artworks,” but also beautifully interpret the history of the building.

In early 2013, the ground floor was being fitted out as a row of retail shops, one of which faces the street and utilizes the original front foyer. The others will be accessed from a new colonnade cut into the external walls, the original structural bays ordering the procession of thick brickwork piers. This promises to be a good urban space, a side street off a busy strip, where smaller, quieter operations can flourish.

One of the striking accomplishments of the project is the way the original brickwork, steel, plaster and timber are celebrated and contrasted with the more familiar stuff of spec-building – plasterboard and painted render, dramatized with a thread of well-detailed galvanized steel mesh and balustrades.

One of the striking accomplishments of the project is the way the original brickwork, steel, plaster and timber are celebrated and contrasted with the more familiar stuff of spec-building – plasterboard and painted render, dramatized with a thread of well-detailed galvanized steel mesh and balustrades. “Materiality is the biggest architectural issue in apartments at this level of the market,” says Thalis. The other achievement is the way the tall, sunlit volumes at either end, garnished with the “trophies” remaining from the original Majestic, are able to recall the much grander spaces of the original cinema, in a way that a less considered residential conversion, or even a “big box” retail project such as a supermarket, would not.

At the Majestic, Hill Thalis has achieved success in one of the ongoing, key issues of the city today: managing the “opposition between economics and architecture” that faces everyone from design practices and developers to the end user. Hill Thalis has designed a place that I am sure the residents all like to call home, and which retains, externally and internally, much of the power of the magical “talkies.”

1. The New South Wales Department of Planning’s State Environmental Planning Policy 65 was gazetted in 2002 to raise the design quality of residential flat development across the state through the application of a series of design principles. It provides for the establishment of design review panels to provide independent expert advice to councils on the merit of residential flat development. The accompanying regulation requires the involvement of a qualified designer throughout the design, approval and construction stages. 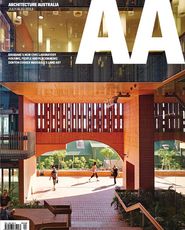 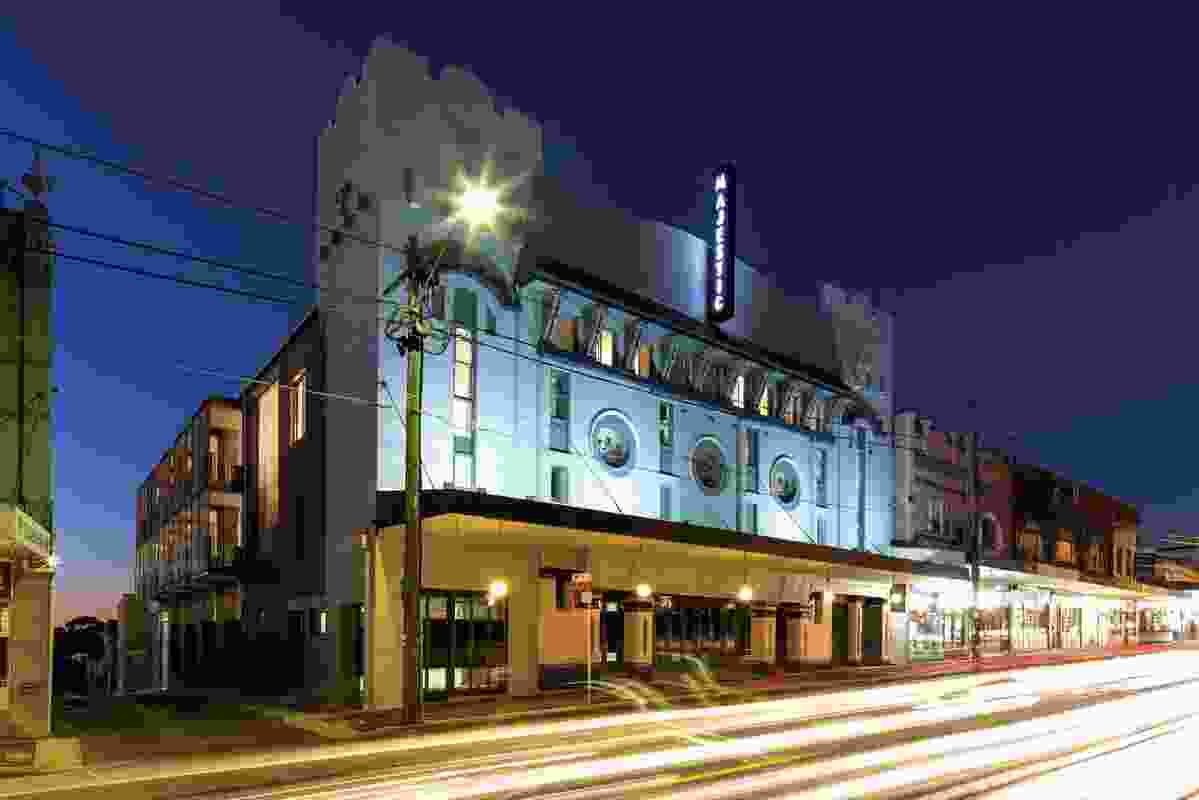 The Majestic Theatre building has been modified many times. 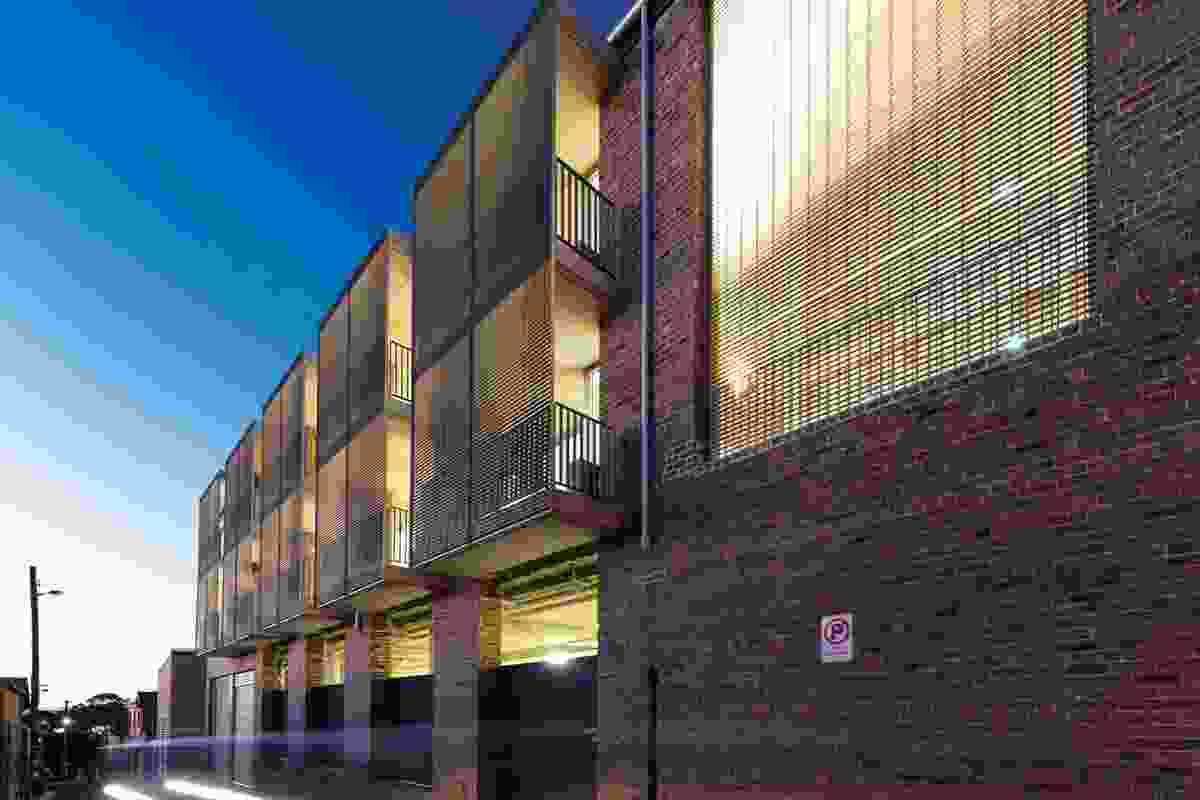 Units are “packed and stacked” to fit within the building’s volume. 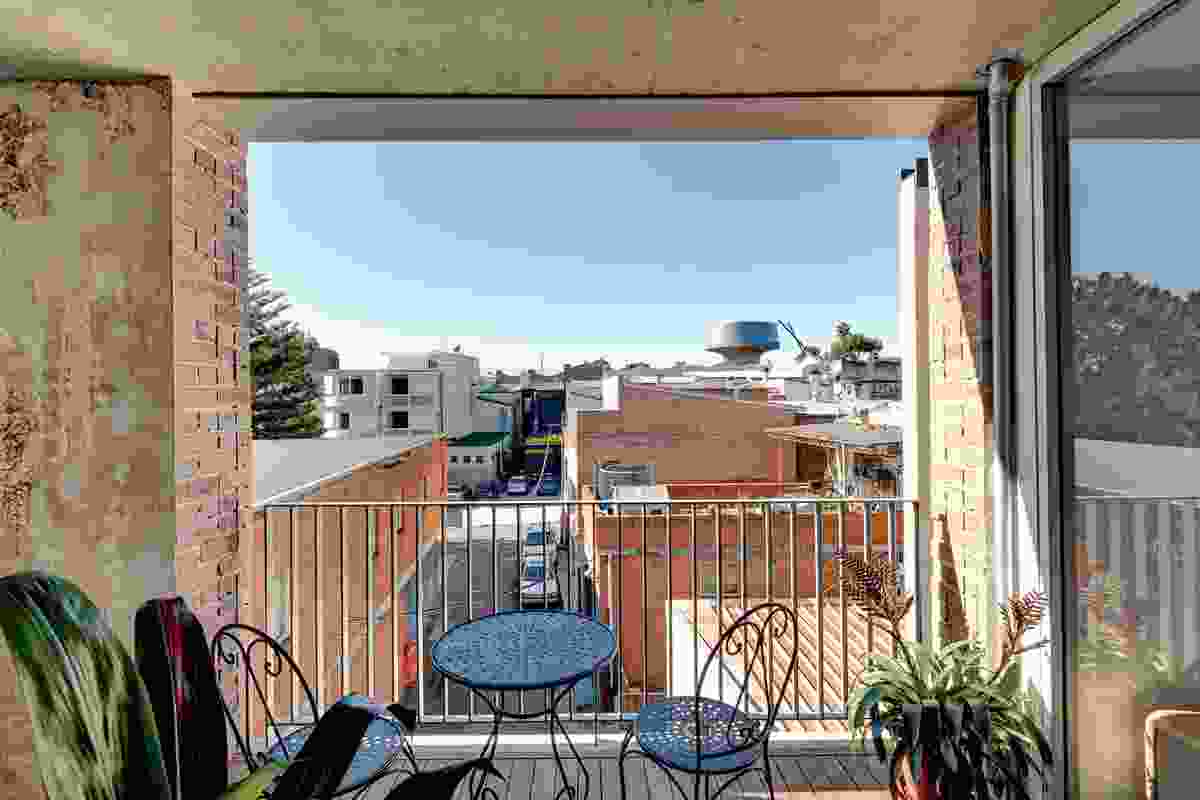 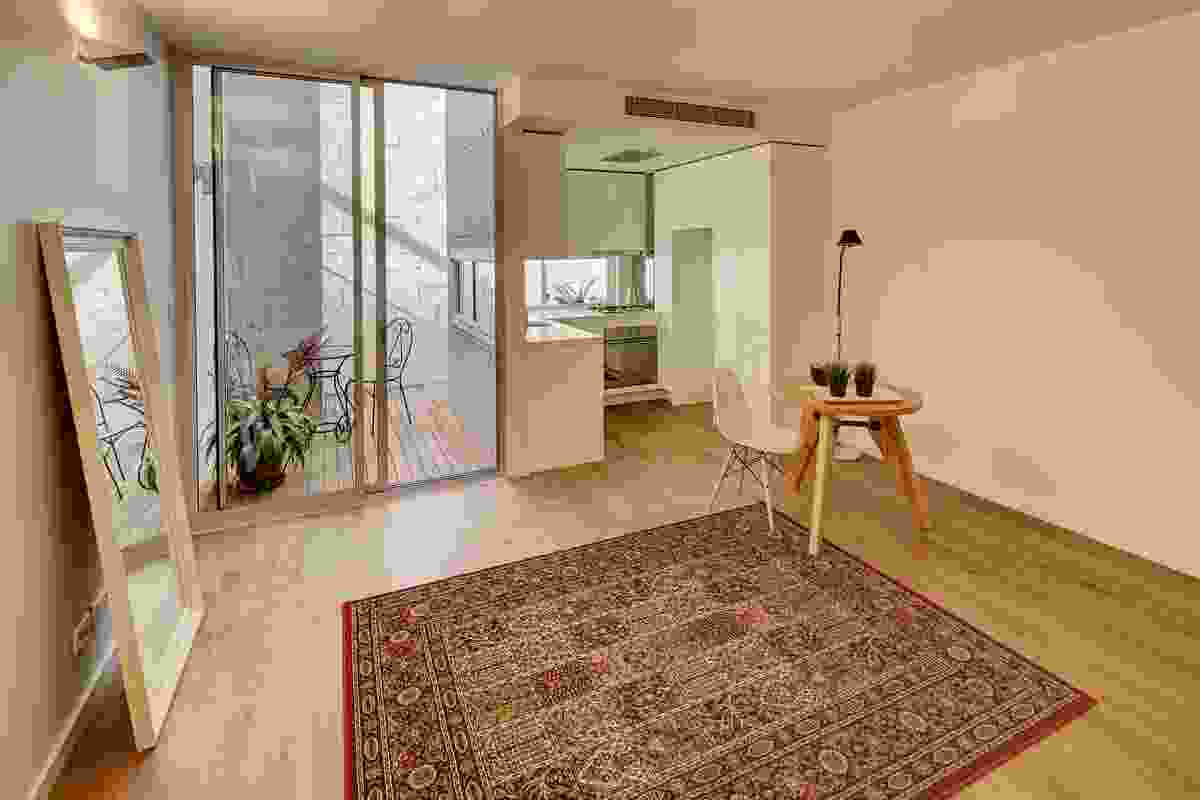 Interiors are compact and thoughtfully planned. 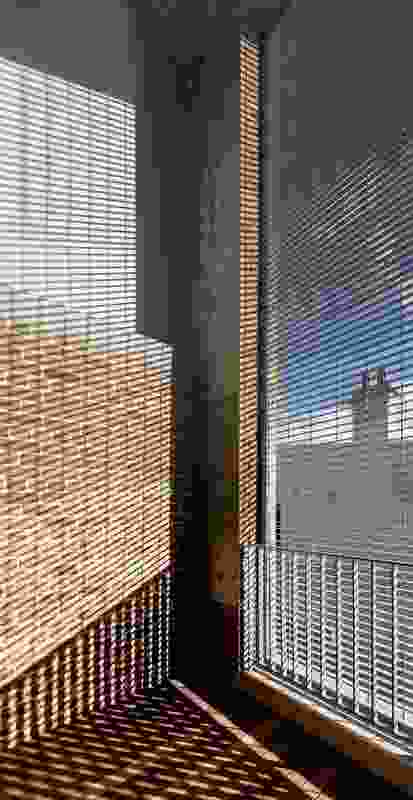 Light plays inside a mirador. 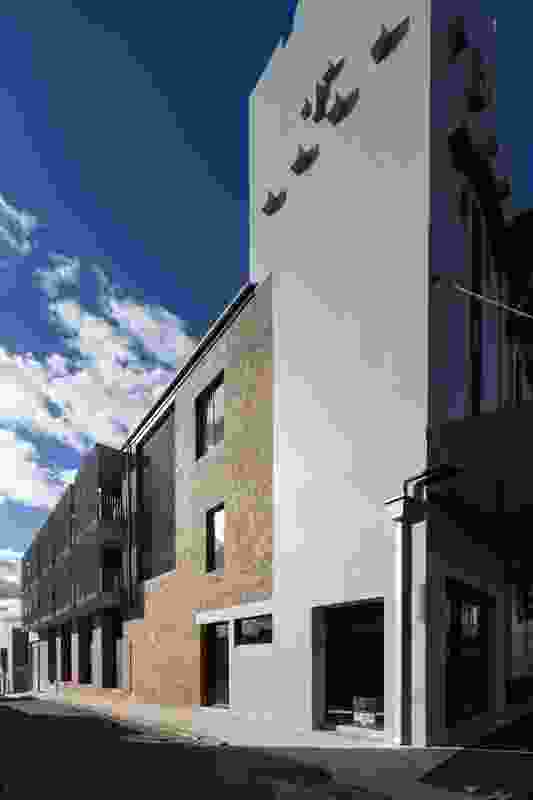 The miradors provide the major external modification to the Majestic. 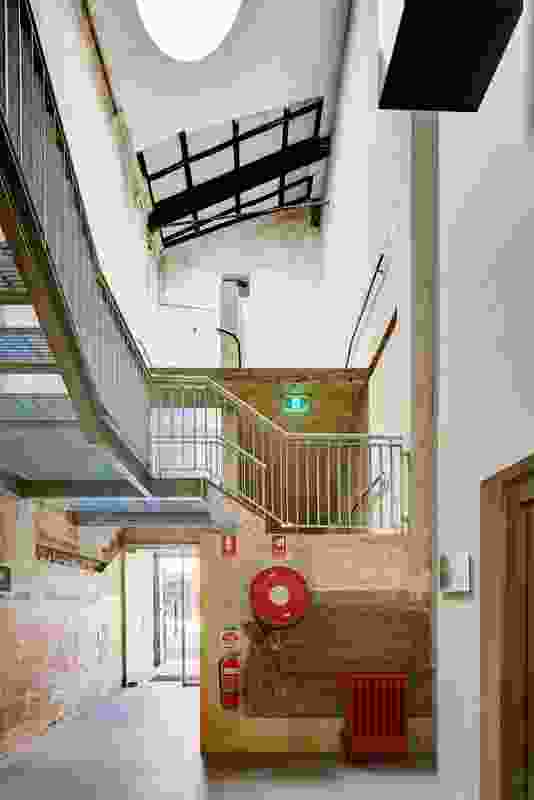 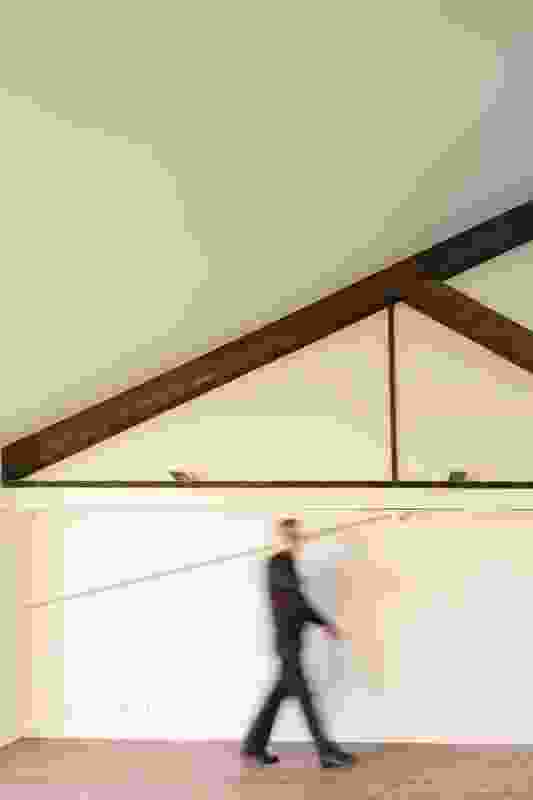 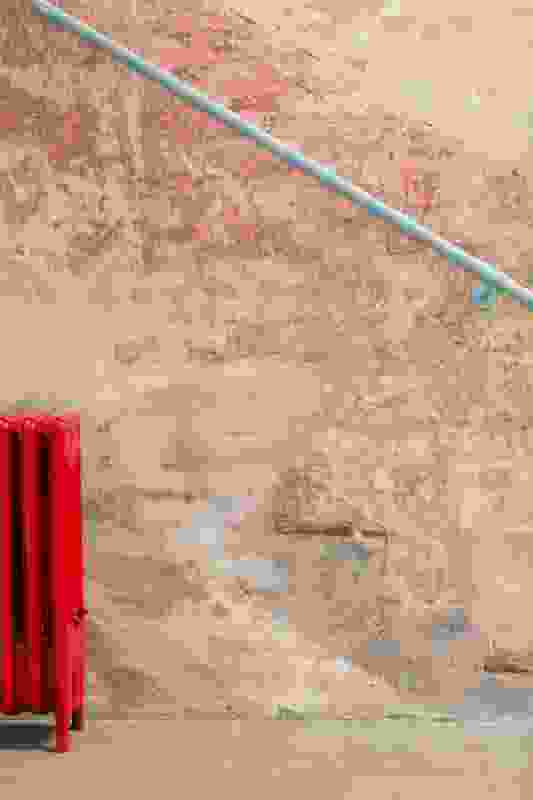 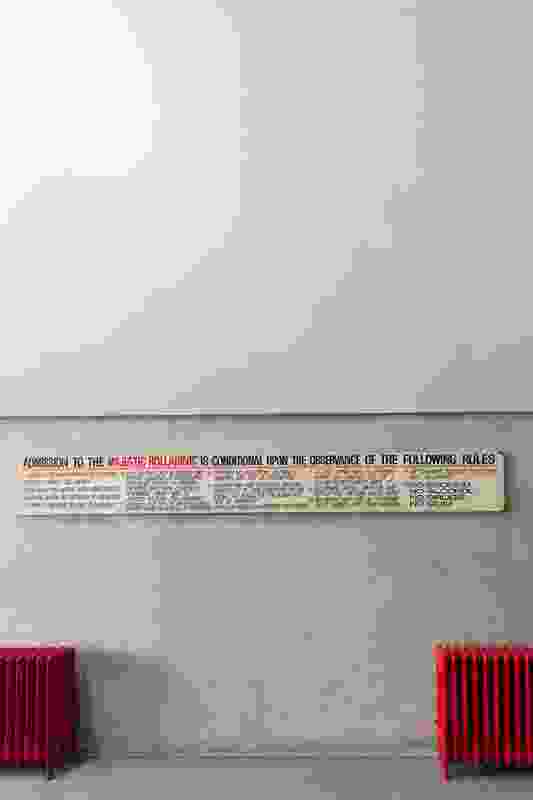 Heritage items such as steam radiators and signage are conserved in the atrium. 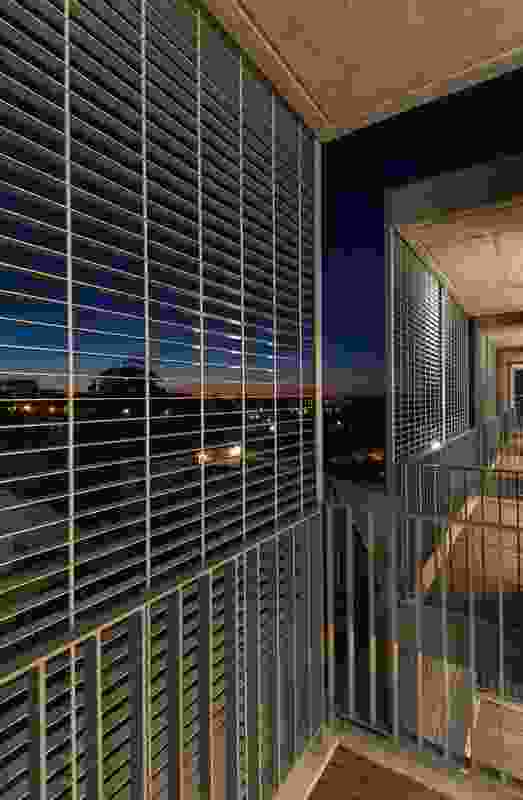 Miradors at night: view out. 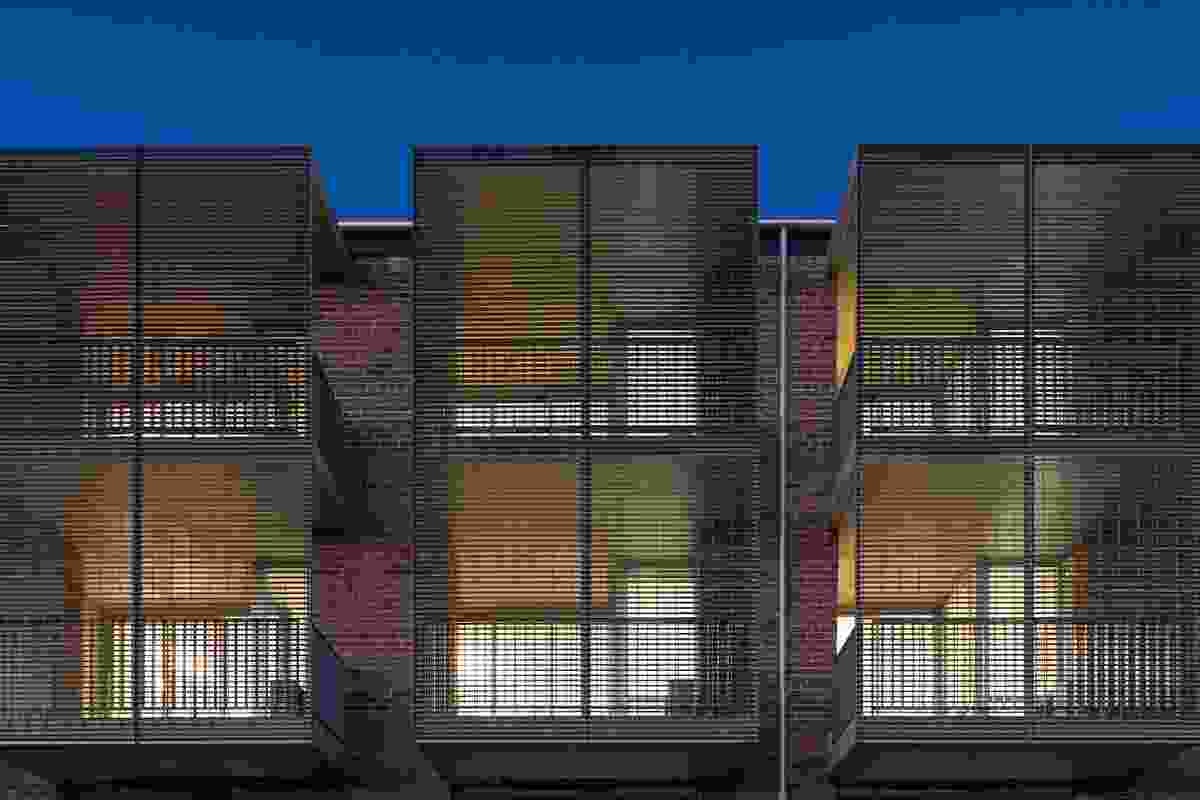 Miradors at night: view in.