Tonkin Zulaikha Greer Architects and Taylor Cullity Lethlean collaborate on an ambitious scheme in Australia’s national captial, transforming a fire-ravaged site into an extensive project for the research and display of trees.

In 2003 disastrous bushfires blazed across south-west Canberra, amid their destruction obliterating a large pine plantation and leaving a 250-hectare void. Deforested, a site of dramatically undulating topography was revealed, with multiple vantage points to survey the panorama of Canberra’s landscape setting: in the fore and middle ground Lake Burley Griffin, Black Mountain, Civic, Red Hill and Scrivener Dam; further afield Mount Stromlo and the Brindabellas. The site lay available to be claimed by a project of matching significance – the National Arboretum Canberra.

The renewal of such a major site presented symbolic opportunities – what was destroyed by nature’s savagery could be regenerated by enlightened ecological strategies. It was the ideal site for a project intended to protect threatened plant species in a climatically challenged world.

With foresight, the Australian Capital Territory Government launched a two-stage national competition in September 2004, concluding the second stage in May 2005. The winners were landscape architects Taylor Cullity Lethlean (TCL) and Tonkin Zulaikha Greer Architects (TZG) – two outstanding established practices working in close collaboration. Their design concept for the arboretum – a collection of trees and shrubs established for display, study and research, effectively a “tree zoo” – was expressed as “100 Forests/100 Gardens,” a comprehensive site strategy that conserves and displays one hundred botanical species. Constructed in time for Canberra’s centenary, this is an all-too-rare successful realization of an open competition-winning scheme in Australia.

TCL and TZG’s project overlaid the site with a flexible “tartan” grid plan, set out parallel to the Griffins’ water axis. The grid is organized in bands of forests, large enough to provide an immersive experience of each selected species. The forests are defined by broad grassland allées that open towards Lake Burley Griffin, with smaller, randomly spaced cross allées.

The dominant grid is then overlaid by contrasting elements, somewhat recalling Bernard Tschumi’s Parc de la Villette, but less dictated by rhetoric. These elements, each with its particular logic, include serpentine paths and roads that work with the contours as they freely traverse the grid. The hills are marked by lookouts and artworks. Elsewhere pragmatic issues are addressed in a straightforward manner. The main car and coach parking is rationally organized on gravel terraces behind the site’s centre. Localized parking is distributed along the serpentine roads throughout the gardens. A large dam at the lowest point is supplemented by water-harvesting strategies including swales, irrigation systems connected to a bore, and large storage and irrigation tanks.

The most exceptional elements are on display from the site entry and are experienced as a thrilling sequence that is counter to the grid. Off a utilitarian grade-separated intersection from Tuggeranong Parkway, an underpass frames the grand sweep of curving terraces that scissor up to the main terrace. The entry road follows the outer edge of the sweep, bringing into view the Events Terrace, which anchors the centre of the site and forms powerful relationships to Canberra’s civic landscape. Its architectural and landscape elements have a boldly imposing scale and coherence rarely attempted in either Australian landscape design or city-making projects.

Forming the arboretum’s monumental heart, the Events Terrace comprises a large grassed amphitheatre framed by a pair of architectural structures. These buildings, linked by contour and material palette, have contrasting form, scale and structure. Recalling the placement of temples and the disposition of sanctuaries in ancient Greece, the buildings occupy prominent spurs below the major hills and are aligned to topographic features. This placement emphasizes their three-dimensional form, as corporal sentinels in the expansive landscape. They can be seen from below and above and in direct elevation from multiple points across the valley. The amphitheatre, buildings and terraces are distinct volumes, providing public indoor and outdoor rooms that command the site.

Particularly impressive is the site’s major building, the Visitor Centre, which has a dramatic, curving form in plan and section. Entered through a gabion-lined cutting from the terraced car park behind, it is a space of remarkable grandeur, defined by a broad, vaulted roof. Its fan-shaped, timber-framed structure is geometrically defined but not a geometric shape; in plan it somewhat resembles the elevation of Utzon’s Opera House shells. Its structure is formed by ten arched beams set out on a radiating geometry, each with differing arc lengths, supported on offset lines and arcs of concrete columns. The building sits on a concrete plinth that continues beyond it to retain expansive terraces to each side.

The tectonic order of the primary elements is for the most part clearly articulated. Muscular concrete columns act as the springing points for branching timber beams that in turn support deep laminated timber beams. These arch and fan from the incised entry to the outer glazed perimeter and incorporate integrated wedge-shaped roof lights. The steel glazing supports are lighter, more subordinate elements. Heavy exterior walls are made of dark stone using a variety of construction methods. The only departures from this constructive rigour are the lateral entry portals to the terraces, which are made of seamless red polycarbonate and jar with the otherwise coherent language of distributed loads and articulated joints.

The Visitor Centre’s unitary volume seamlessly combines restaurant, cafe, information and retail spaces. Due to its scale, location and views, this public room is sure to become a major drawcard for functions. Flanking the entry, masonry wings accommodate meeting rooms, service spaces and site administration, while a tranquil, rectilinear courtyard at the western end houses a stunning bonsai garden, with sheltered seating areas beyond. The eastern terrace has a fantastical children’s playground that toys in its planting and forms with May Gibbs’ famed big, bad Banksia Men.

Offsetting the Visitor Centre, the much smaller Margaret Whitlam Pavilion has a peaked roof aligned towards Lake Burley Griffin and Russell. This tall roof is clad in zinc sheeting over an expressed concrete base. Lacking the size of its counterpart, it emphasizes its verticality and thrusts forward on the prow of the terrace.

Sitting between these architectural forms, a grassed amphitheatre with the capacity to seat over four thousand people is certain to become a memorable venue for performances. The sinuous line of the terrace’s concrete edge sets the datum of both buildings and holds the rear of the amphitheatre. There is a unity of design intent in the earthwork and roofscape, creating an unapologetically “made” landform, integral to the architectural setting. This confident intent contrasts with recent tendencies to conceal public buildings with vegetation, as if architecture must be subordinate to landscape’s cultural imperative.

TZG and TCL have heightened the sense of the topography. In their competition report, they recalled the Greek derivation of the word as topos (place) and graphos (writing).

TZG and TCL have heightened the sense of the topography. In their competition report, they recalled the Greek derivation of the word as topos (place) and graphos (writing). The straight line of the grid and the datum of the platform reveal the topography like a slice or transect that accentuates the perception and experience of slope. The repose of the platform emphasizes the articulated profiles of the roof structures that are inscribed against the sky.

The intelligent use of a grid as the site’s primary structuring element challenges various tropes of recent Australian urban and landscape design. It opposes the ideologies and related geometries that have come to typify Canberra: the Griffins’ carefully interwoven triangles, hexagons and axes; the postwar technocratic picturesque, as deadeningly applied by the surveyor and traffic engineer; or the wilfulness of the dominant Gardenesque movement. Consider the parallels with the Gardenesque’s fellow traveller Townscape, so forcefully denounced by Colin Rowe and Fred Koetter for its “tendency … to provide sensation without plan, to appeal to the eye and not the mind, and while usefully sponsoring a perceptual world, to devalue a world of concepts.” (Collage City, 1978, page 36.)

As the authors stated in their second-stage competition submission, “100 Forests/100 Gardens will be a platform of substance for hundreds of years of growth.” As TCL and TZG acknowledge, the plan and its three-dimensional articulation are the foundation, but the place will be subject to a living process, open to evolution, maturation and enrichment.

The challenge for the future is how the National Arboretum will make itself part of greater Canberra, rather than just an occasional drive-to destination.

The challenge for the future is how the National Arboretum will make itself part of greater Canberra, rather than just an occasional drive-to destination. In time and as the arboretum becomes part of the city’s daily life rather than a place apart, the project should assert its influence beyond its perimeter.

The National Arboretum is a work of rare ambition and exceptional scale in Australia. This mature project confidently displays its architectural and landscape agendas and expression. It is a notable addition to Canberra’s legion of public assets and optimistically expands Australia’s evolving conception of public places. 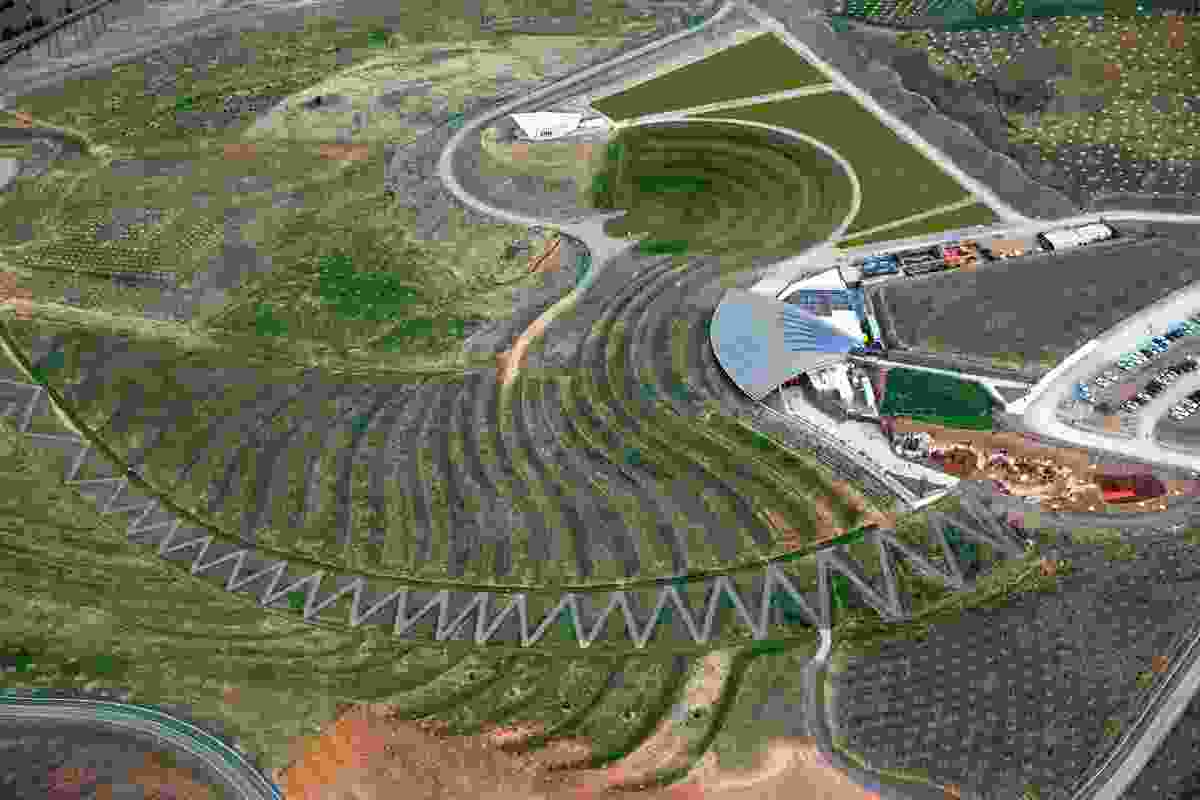 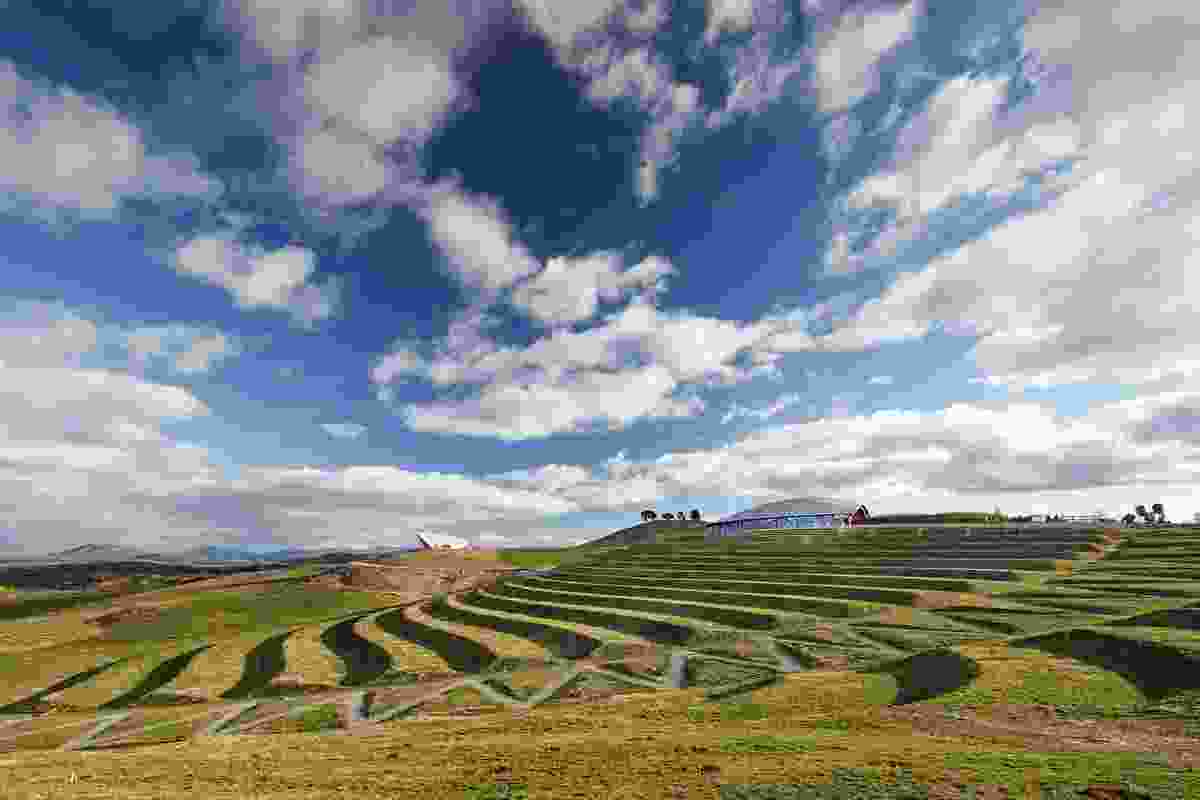 Two buildings, sitting atop prominent spurs and separated by a grassed amphitheatre, serve as sentinels within the landscape. 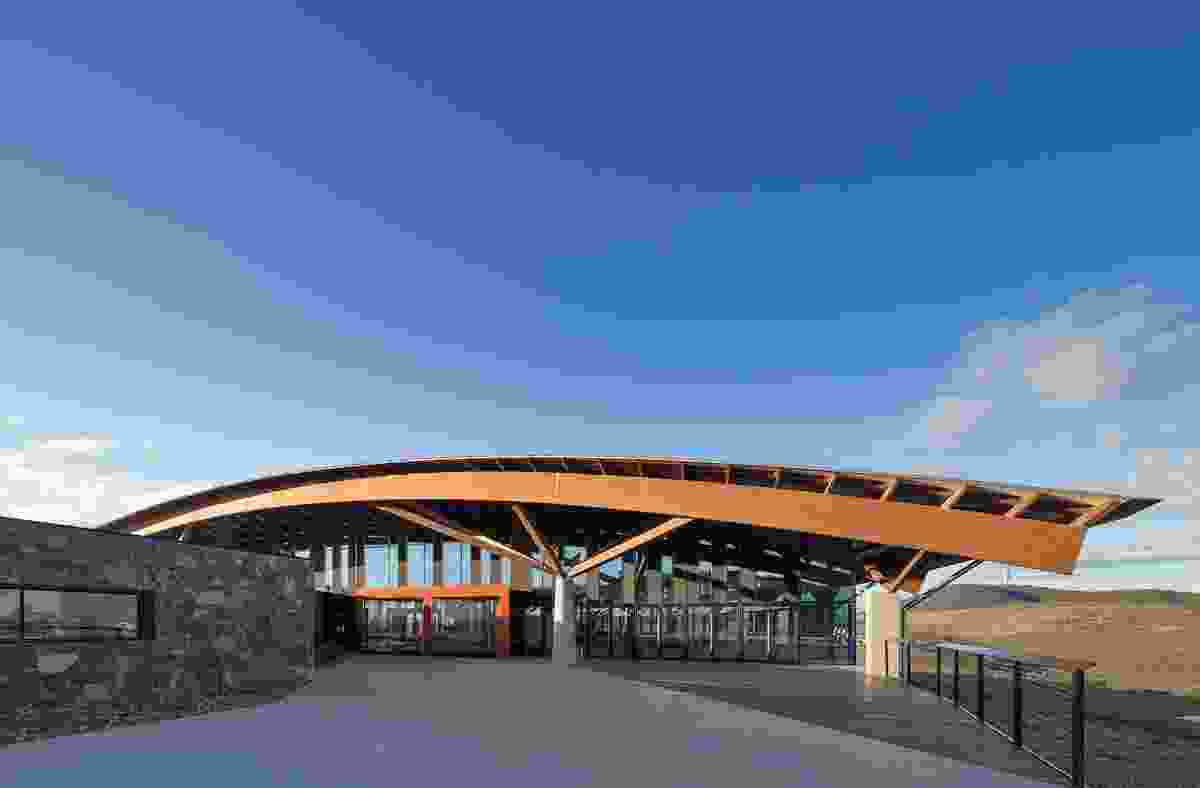 The sweeping arc of the Visitor Centre’s roof and the adjacent viewing terrace. 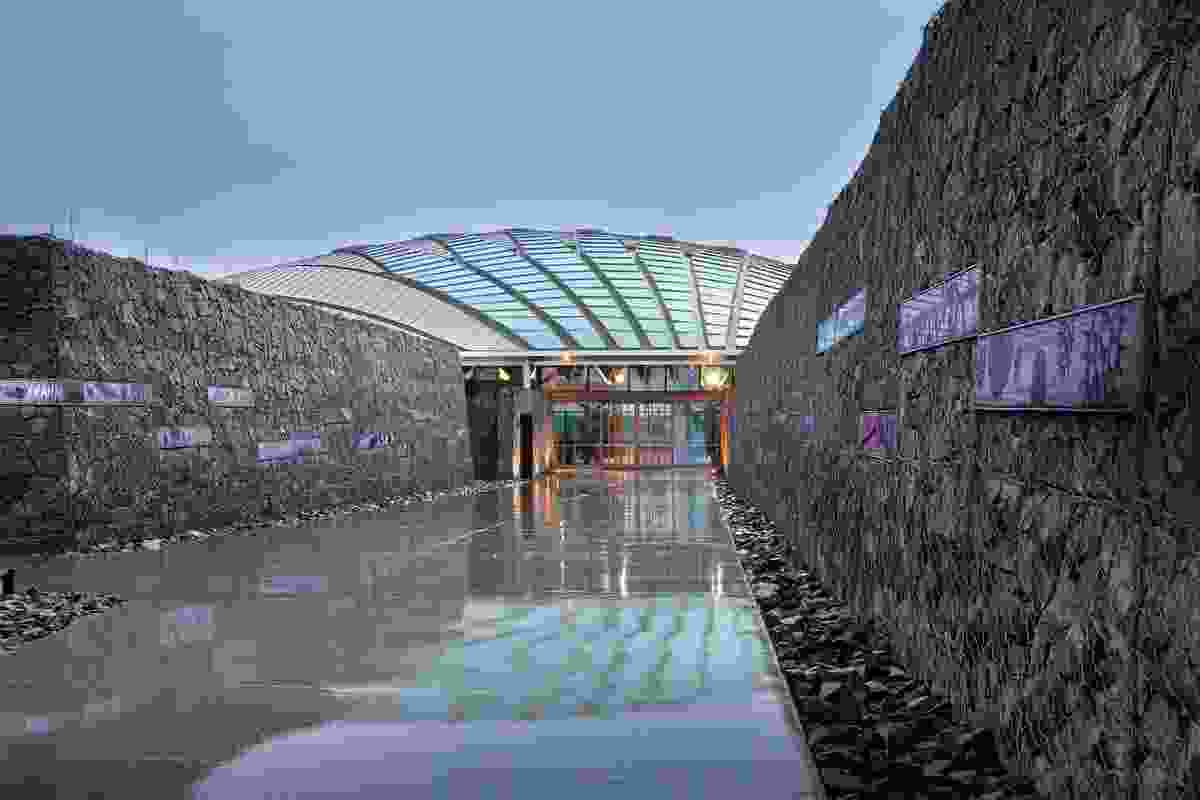 The main entry to the Visitor Centre, with views through the building and out to the landscape and amphitheatre beyond. 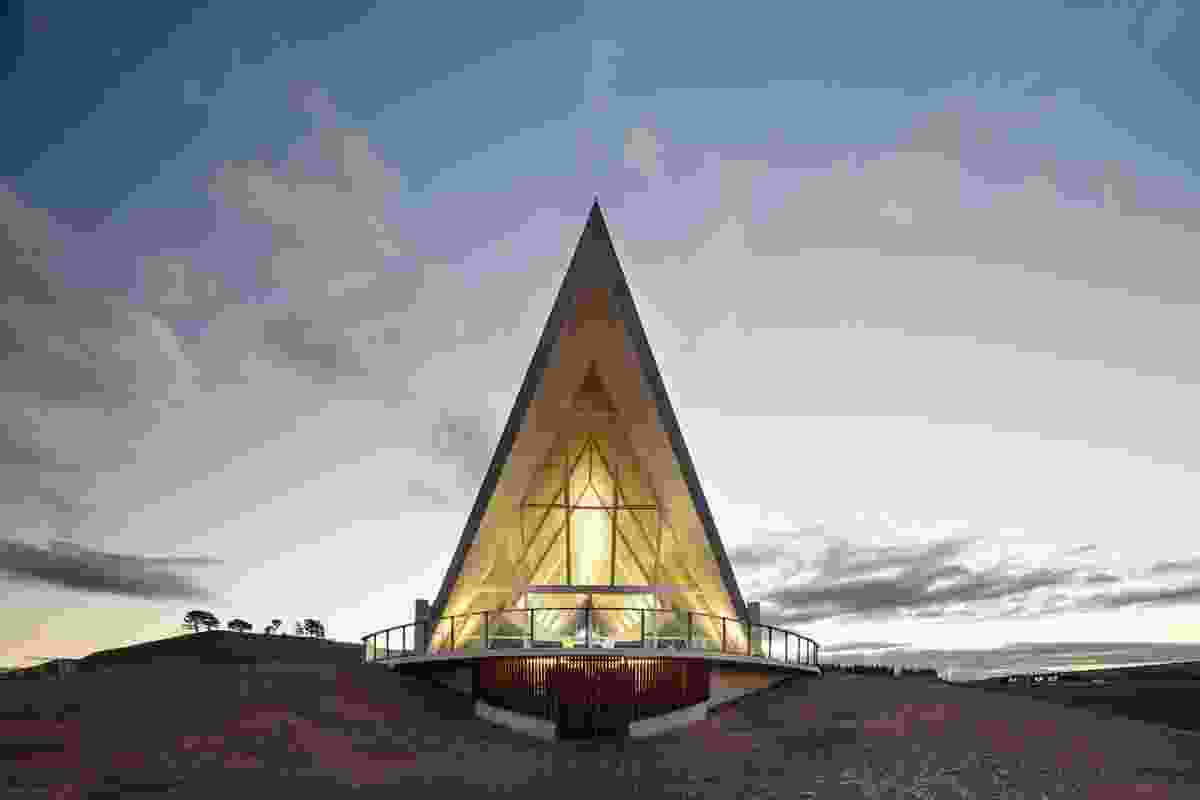 The steeply pitched roof of the smaller Margaret Whitlam Pavilion lends the building a strong presence in the landscape.