The cluster of mega-developments emerging at the southern end of Sydney’s central business district are an experiment in the new economic relationships between China and Australia.

Australia emerged from the 2008 Global Financial Crisis in a much better economic state than most developed economies and with one of the strongest property markets in the world. Encouraged by this, Chinese investors committed $24 billion in new developments throughout Sydney. Another $44 billion is flowing in over the next seven years. The Dictionary of Sydney website notes that the “story of the frail Chinese community in the first two centuries of the city’s history will stand in stark contrast to the story that is to come.” In light of current migration and investment patterns, this invocation for a more positive cross-cultural future is unnecessary. Sydney’s current transformation is already closely intertwined with the new China and the Southeast Asian Tigers. Leading Sydney’s development boom are Singaporean and Chinese firms such as Greenland Holding Group, Dalian Wanda Group, Frasers Property and Far East Organization. This investment is part of a long-term business strategy, supplemented by smaller investments by high-income Chinese families coming to Australia for the clean air, economic stability and quality education. In simple economic terms this translates as apartments and university degrees. Chinatown’s traditional centre, focused on Dixon Street and Haymarket, has expanded to include a much greater share of Sydney’s southern CBD and more diverse ethnic and cultural identities.

The new Chinatown is a dynamic global space, an experiment in the new economic relationships between China and Australia and in new urban lifestyles. Although this cultural influence is diffused throughout Sydney’s CBD, its impact on the development landscape is most recognizable in a cluster of eclectic mega-developments emerging at the southern end of the city: specialist precincts such as the $1 billion University of Technology, Sydney (UTS) education development, the $2.5 billion redevelopment of Darling Harbour and the development of the new $2 billion urban quarter called Central Park. Each of these projects contributes to the reshaping of Sydney’s southern CBD and the redefinition of Sydney’s urban culture into a much more mixed, pedestrian-orientated landscape. These “mega-projects” are integrated along four axes that converge at Railway Square, Central Station. Two of the axes – George Street and Broadway – are existing streets. The other two include a new orientating axis for Darling Harbour and the retrofitting of a disused rail corridor.

The 5.8-hectare Central Park development is currently the most complete of these mega-projects. In 2007, Singapore-owned Frasers Property purchased the site following a previous failed development attempt. The approval authority was transferred to the more developer-friendly state government; however, the eventual success of the project can perhaps be attributed to Frasers’s CEO, Dr Stanley Quek, with his eccentric vision and careful emphasis on quality. The mix of 2,500 residents and 5,400 workers brings increased intensity to a stretch of Broadway that has relied on the transient → population of students from UTS for its life.

Jeppe Aagaard Andersen and Turf Design completed the masterplan and detailing of the public domain for the project and continue to work on its final stages. In the presence of so much “starchitecture,” their approach has been to keep the landscape as simple as possible. Expressive architecture by Ateliers Jean Nouvel and PTW Architects features green walls, hanging gardens, verdant balcony gardens and a giant array of mirrors designed to reflect light into the development. Nouvel’s One Central Park building was designed as a deeply fissured facade with green balconies detailed by Aspect Studios and Oculus and green walls by botanist Patrick Blanc. The luxuriant greenery surprises and acts as an extension of the building, joining its many high-tech engineered systems. Mike Horne, director of Turf Design, was so impressed with One Central Park that he has moved in and remarks that the freshness the vegetation brings to the apartments is very real.

Tension between scales is evident in the hardscape and planting materials for Central Park’s public domain: for example Chippendale Green, the main green space, reads as both a garden and a park. With a planting palette chosen from among Sydney’s most loved species – both local and imported – the park feels comfortable, like an oversized, heavily used backyard. The correctness of the decision to situate the Green next to the fine grain of Chippendale, rather than losing it amongst the new high-rise architecture, is instantly apparent. In essence it is a single plane of lawn bisected by a path, aligned with the existing streets of Chippendale. Set into the lawn is a remarkable kinetic sculpture, Halo , by artists Turpin and Crawford Studio. Powered only by wind, a giant golden carbon fibre “halo” tilts and turns on a tiny ceramic bearing the size of a small marble, giving the sculpture its tipsy, off-centre movement. Positioned next to the heritage Tooth’s Brewery building, the wit of the sculpture is evident. Fine-grain laneways and streets extend from Chippendale Green, giving the precinct a permeable pedestrian ground plane.

Education is an important part of Sydney’s attraction for Chinese investors and immigrants. Across the road, the looming UTS tower matches the scale of Central Park if not the sophistication of its architecture. This crude brutalist legacy and the ad hoc architecture making up UTS’s city campus are being addressed through a billion-dollar makeover. A new gossamer podium extension by Lacoste + Stevenson in association with DJRD and Six Degrees brings the built form to the street edge and gives UTS’s Broadway address a high-tech face. Other spectacular pieces of architecture include one by Frank Gehry and one by Denton Corker Marshall. In amongst all this iconic architecture is the competition-winning design for UTS by Aspect Studios. Alumni Green has been divided into three components: a garden, a green and a hard square or gathering space. It is not a calm space but a restless one, full of elements, and as expressive in its own way as the architecture rising around it. The space rests above a new high-tech robotic library retrieval system.

The redesign of the Darling Harbour public realm by Hassell seeks to tap into the vitality of Chinatown, replacing the postmodern planning with more traditional blocks and streets that integrate with the surrounding neighbourhood. Angus Bruce, lead landscape architect, suggests that despite the size of the new event and entertainment buildings, the design for the precinct aspires to be as permeable as possible and involves removing the awkward level changes and obstacles that previously closed the site off from Chinatown and its surrounds. The red paving and the former dominance of a single architect in the 1980s design for Darling Harbour have been replaced with work by multiple architects and urban surfaces consistent with the wider city. Granite paving and standard city signage will bring the material language of the surrounds into the site. The major orientating axis, known as the Boulevard, functions as a shaded thoroughfare and an event space, supporting Darling Harbour’s old program as well as inviting new possibilities. Major new public spaces by Aspect Studios are positioned along the Boulevard, which will be planted with endemic species including Eucalyptus saligna , Eucalyptus robusta and Corymbia maculata . The new precinct aims to compete with conference and exhibition venues in Hong Kong, Singapore and other Asian global cities.

Adjacent to the Boulevard is the Goods Line, also by Aspect Studios (in collaboration with CHROFI). In contrast to the urban polish of Darling Harbour’s redesign, Aspect director Sacha Coles has envisaged the material appearance of the space as a fusion of the raw industrial heritage of the former rail line and a new high-tech expression. The public space functions as a series of outdoor rooms complete with wi-fi and power outlets, making it an annexe to adjacent city buildings. Situated ten metres above Darling Harbour, on Ultimo’s sandstone ridge, the space will have views through the enormous shady figs to the activity below via a series of jutting relaxation pods.

Central Sydney is currently experiencing a development boom that will decisively change its character for decades to come. The transformation of the city reflects the evolution of a more sophisticated service economy within Sydney and the rise of Chinese fortunes. An ensemble of large urban projects is expanding the traditional boundary of the central business district. However, in contrast to the dark street canyons of the existing CBD, the southern CBD is evolving as a much more liveable collection of precincts with quality open space, lively streetscapes and a more eclectic mix of uses. At the centre of these changing landscapes is a fine-grained Chinatown: a memory of a culture’s past and a link to the future. 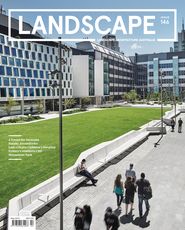 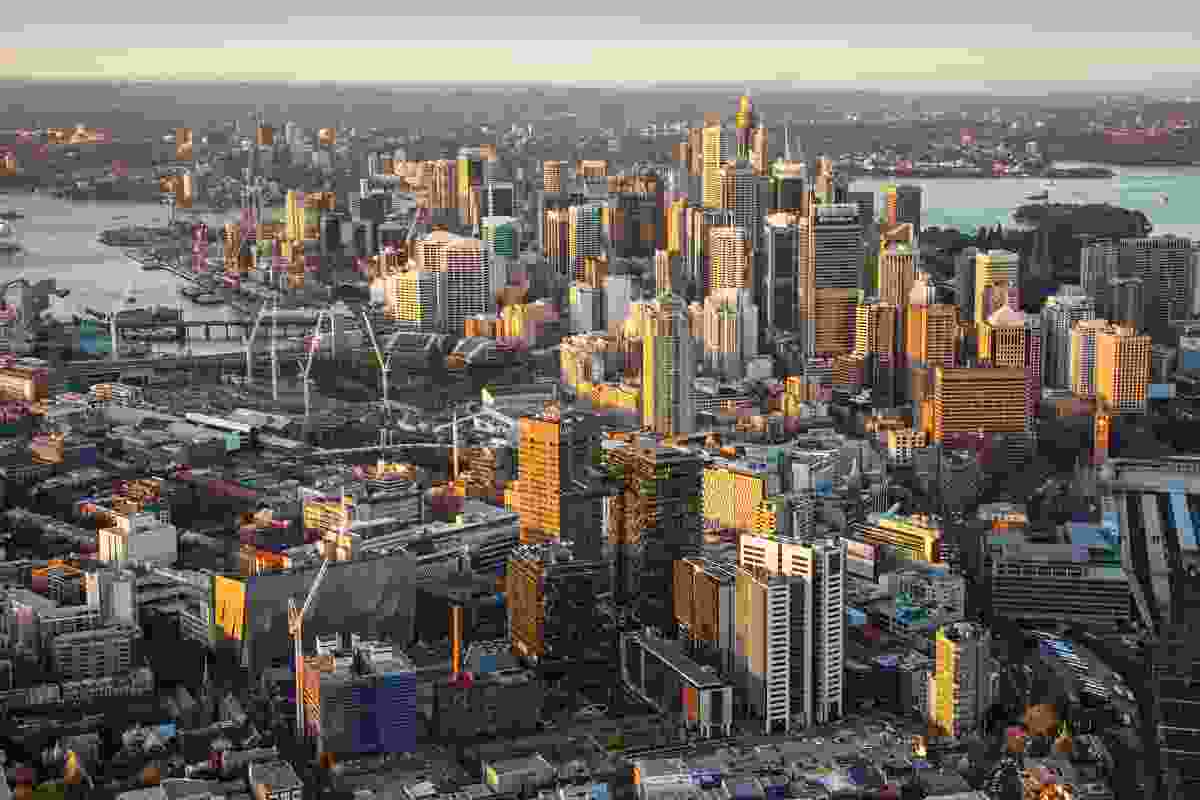 The lush roof garden of One Central Park. 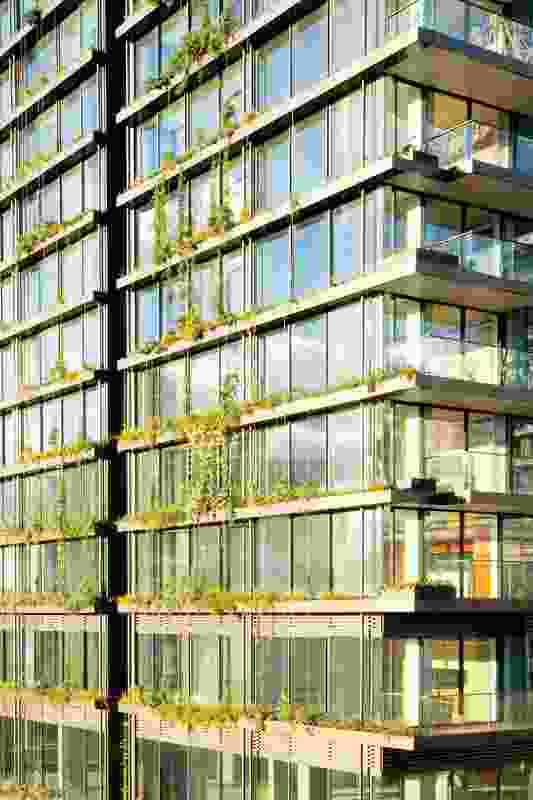 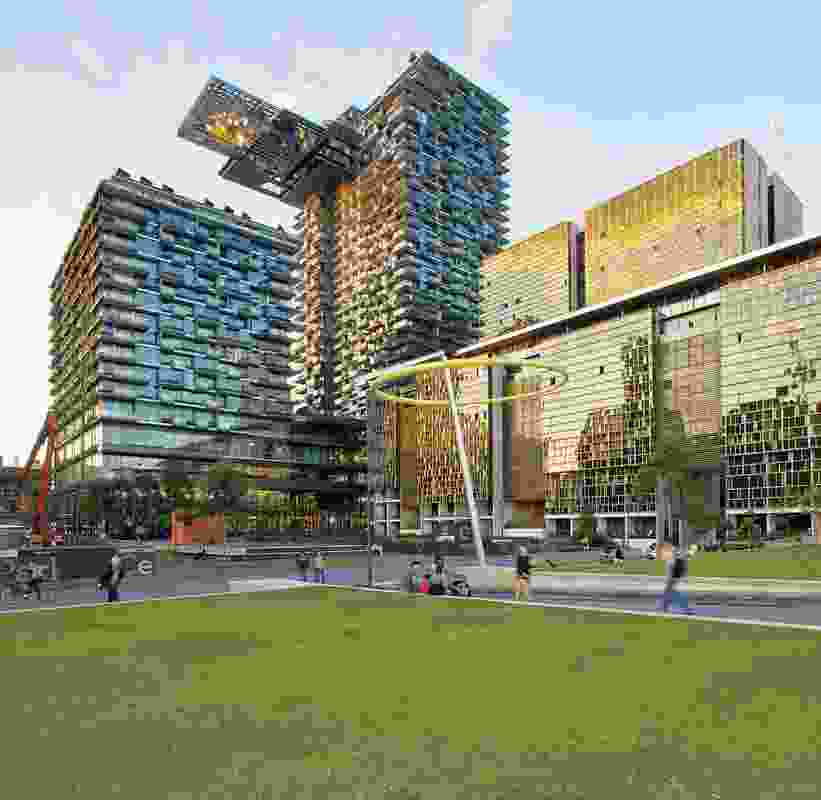 Chippendale Green is a simple lawn platform where a variety of urban activities take place daily. The Halo sculpture is located in the centre of the open space. 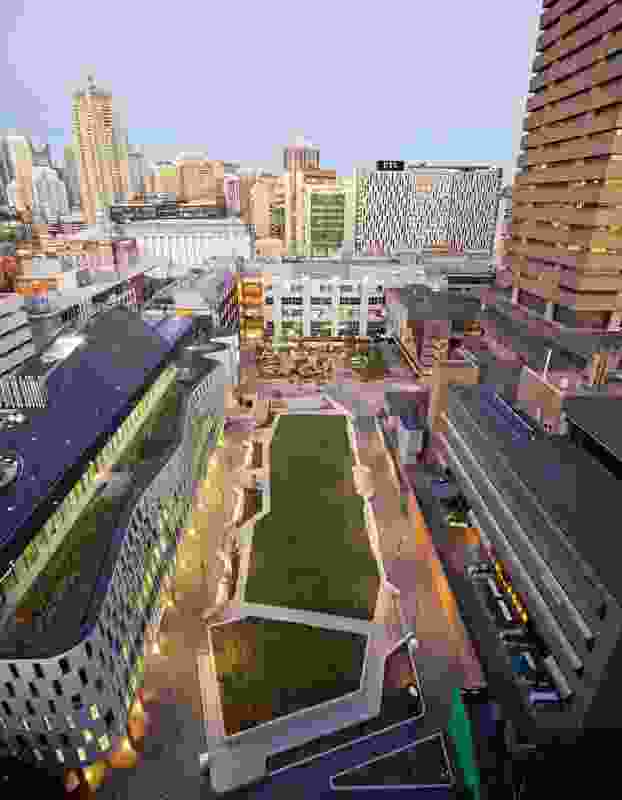 UTS’s Alumni Green is divided into three spaces: a garden, a green and a hard square or gathering space. 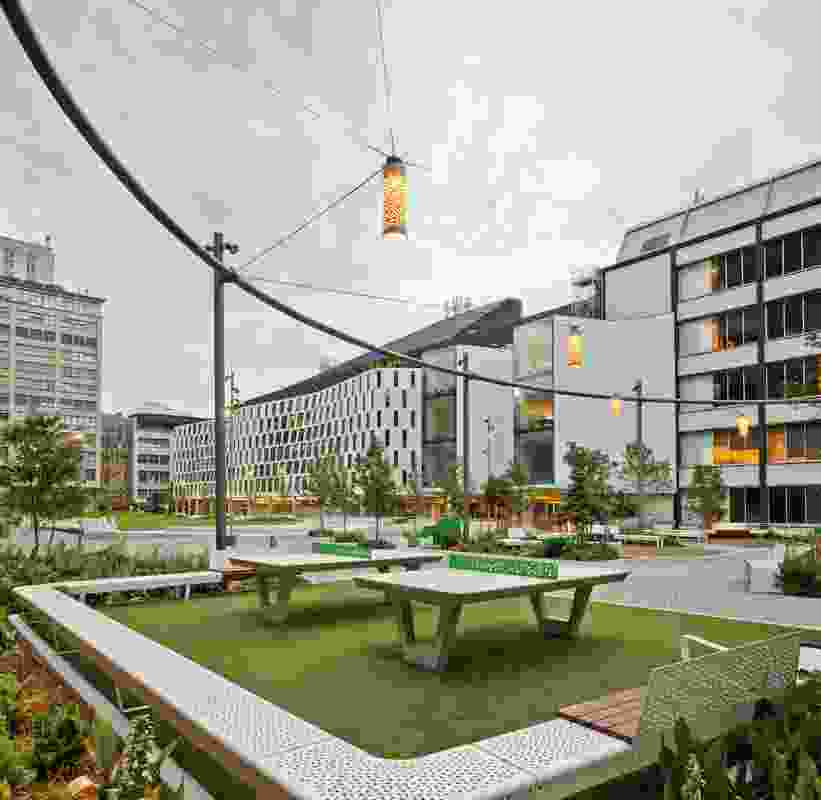 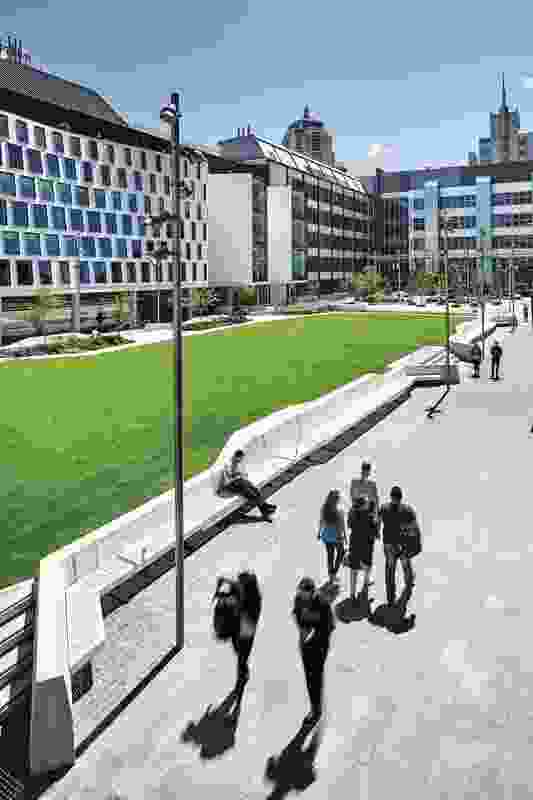 Precast concrete seats retain a raised turf platform that forms the major element of within the Alumni Green. 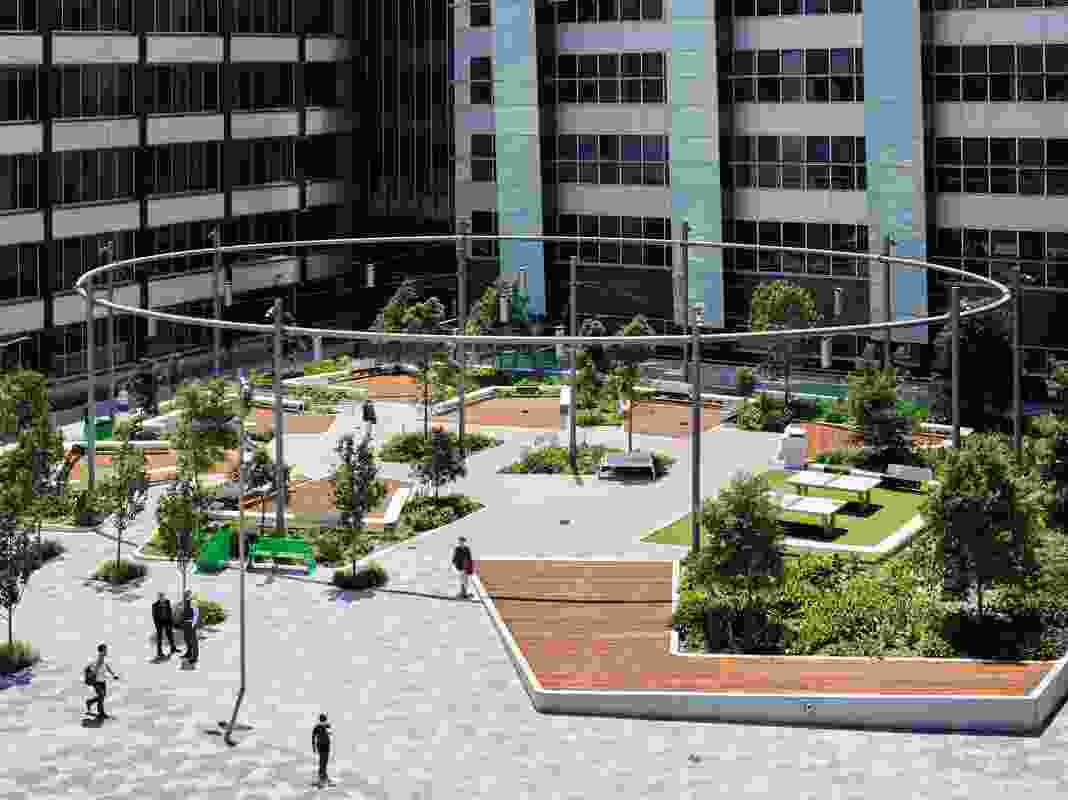 Clusters of seating and lush planting are configured under a circular lighting structure, providing interest in the midst of dull architecture. 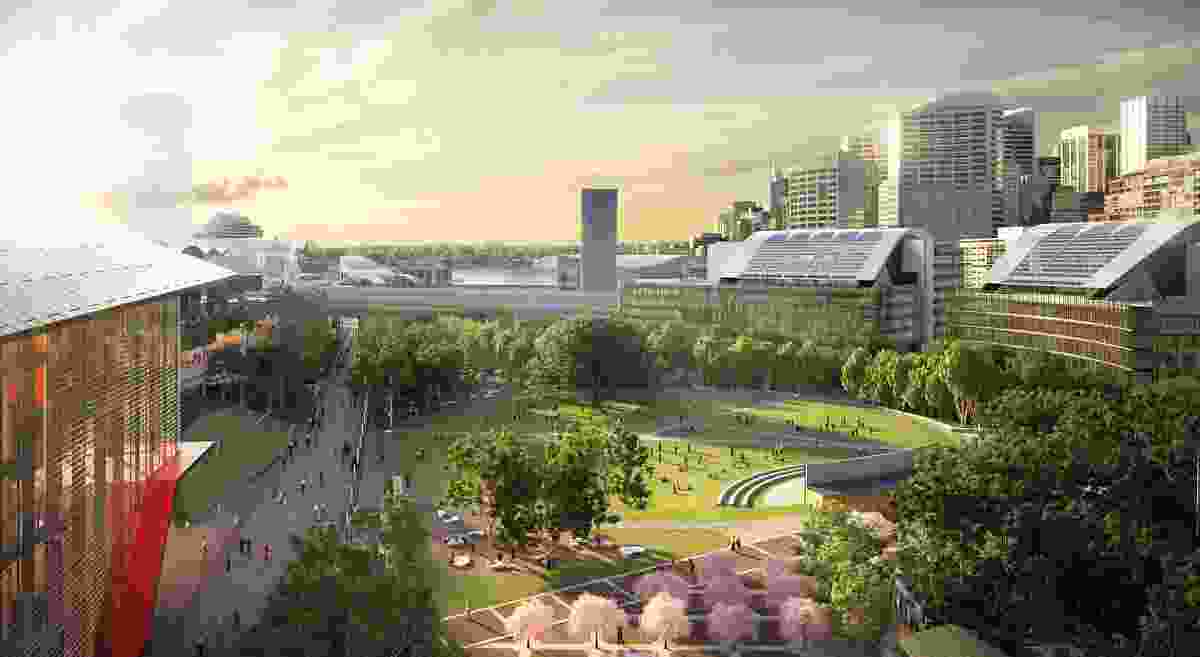 The Boulevard generates a direct connection from Central Station to Darling Harbour in a context where sight lines are obscured by the many revealed. 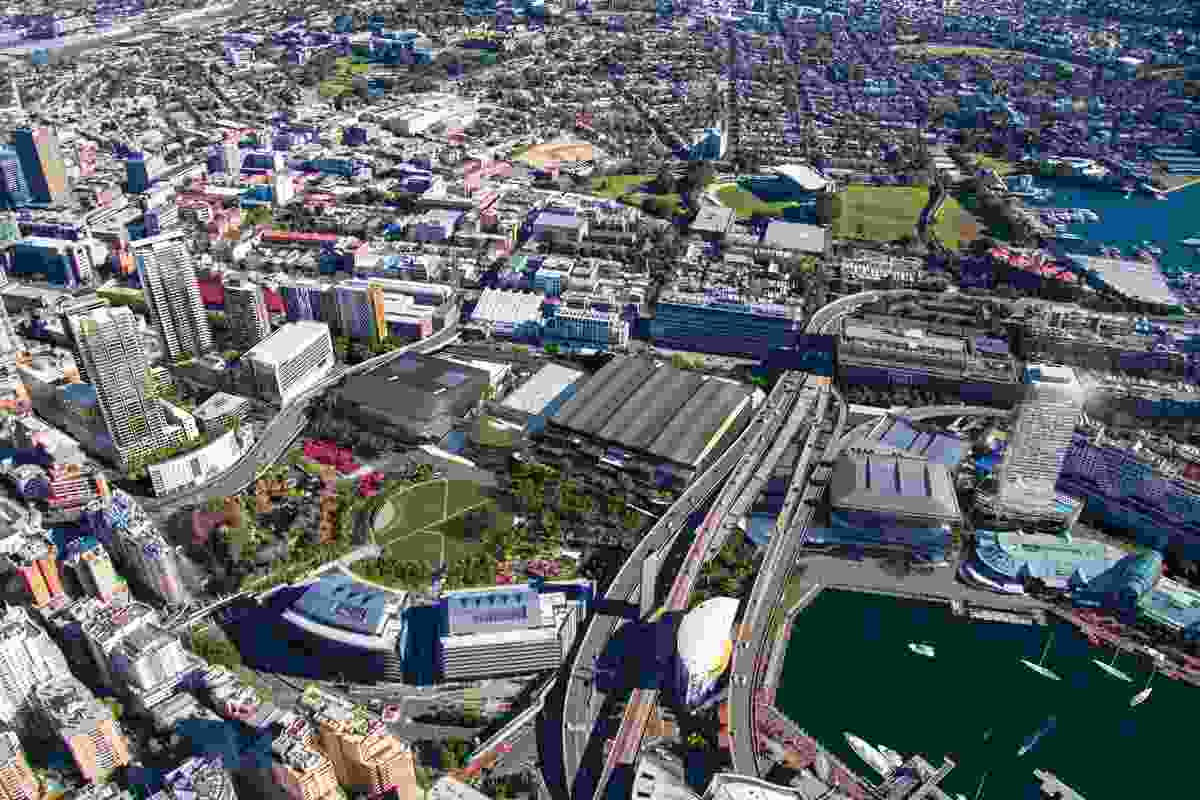 In the past, Darling Harbour has been cut off from the rest of the city. The new design for the area seeks to build new connections, introducing residential and standard detailing into the site. 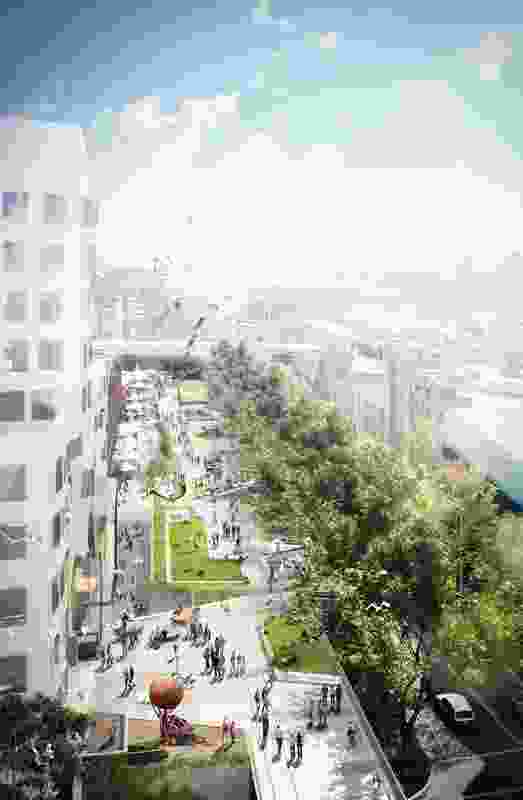 The Goods Line is imagined as a heavily used public space that creates new links between Ultimo and Darling Harbour. 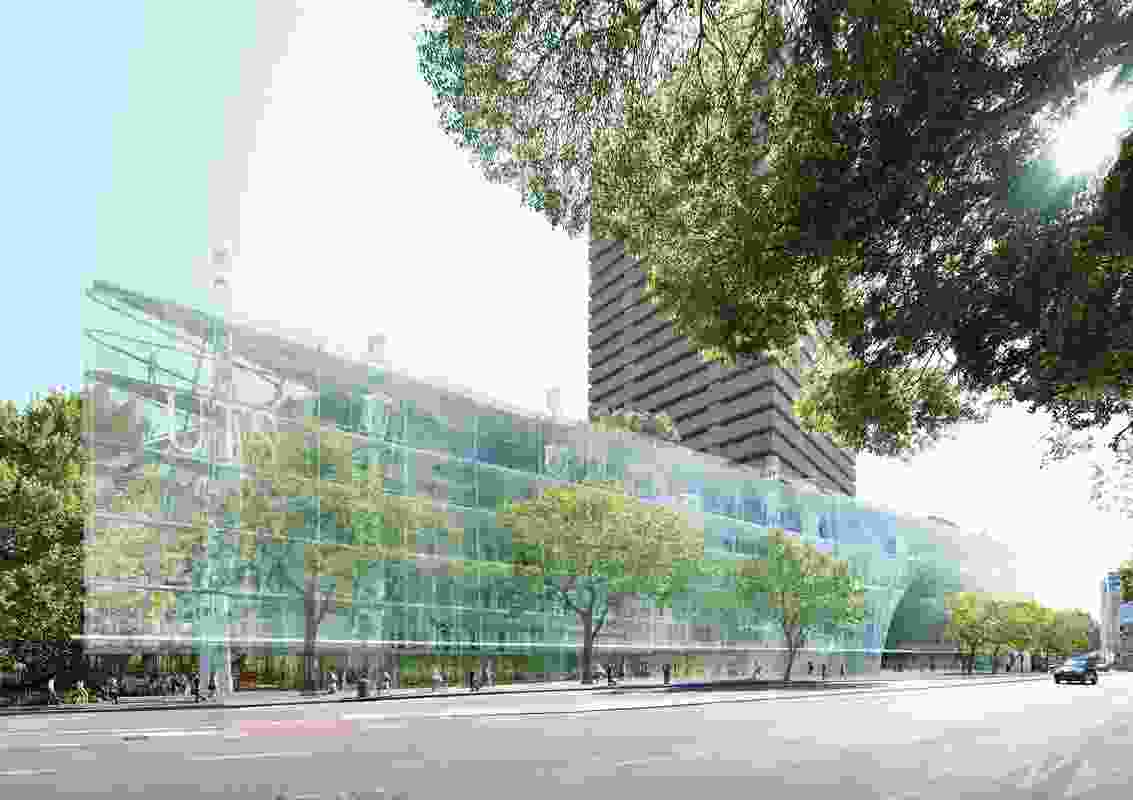 Lacoste + Stevenson won the competition to design the podium extension for the UTS tower building. The high-tech glass structure is designed as a “traditional” street-edged building to recover space lost in the modernist setback of the tower building. 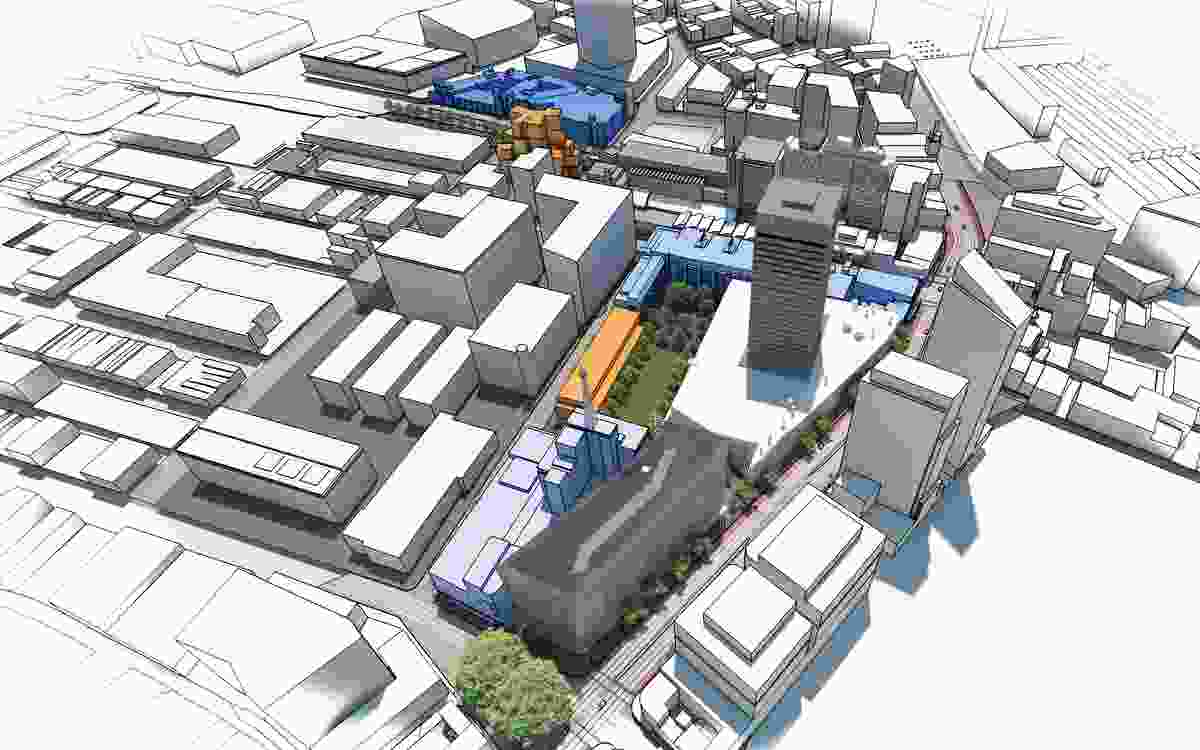