A white flag imprinted with the words “future practice” flies on the front cover of Rory Hyde’s first book. It is an appropriate title image: over a short career Hyde has an extensive history of promoting architecture beyond the professional and academic communities. His involvement in architecture radio program The Architects has been enormously effective in bringing architecture to a broad audience. This, along with his work with the Office for Unsolicited Architecture (initiated by the Netherlands Architecture Institute), a bootleg issue of Volume magazine and legitimate issues of Volume demonstrate a commitment to a direct engagement with architecture beyond the confines of a traditional practice model.

Future Practice: Conversations from the Edge of Architecture has its genesis in a blog post by Hyde written in December 2010 (initially published in Architectural Review Australia 116). That post, titled “Potential Futures for Design Practice,” outlined eight potential roles for design professionals operating in and around the field of architecture. The post generated a relatively large discussion within the blog’s comments section and, in turn, caught the eye of a publisher. Less than two years later, there is a fully formed book in my bag.

The book is arranged as follows: a foreword by Dan Hill, an introduction by Rory Hyde, then seventeen interviews with a diverse range of practitioners within and around the discipline of architecture.

Hill’s foreword is direct, pithy and pulls no punches. He lays down architecture’s inadequacies in driving the urban agenda, pointing out that as much as the profession may desire a seat at the table where decisions on the city are being made … there is no evidence to suggest that architects are necessarily well-placed to lead that work, at least currently. The interviews here suggest a new breed that have some productive sensibilities, but for most architects, a thorough recalibration of their craft would be required to warrant their involvement in more meaningful aspects of city-making, beyond building.

Hill also points out that while some in the profession may see the architect rebranding him or herself as an all-purpose design-thinking consultant – a possible future exit strategy for a profession looking for legitimacy beyond building design – the role of the “professional generalist” is by no means a skill set exclusive to architects. It is a bracing introduction by Hill and one that sets the agenda for the subsequent interviews.

Those seventeen interviewees include designer Bruce Mau, the editors of Volume , architect Steve Ashton and grassroots activist Camila Bustamante, each of whom is given a descriptive title (The Massive Changer, The Editor of the Beyond, The Contractual Innovator and The Urban Activist, respectively) as in Hyde’s initial blog post. These titles or personas – which we learn in the interview with Melanie Dodd were influenced by Dodd’s PhD research – are in one sense reductive, narrowing a practice to a singular focus, but also focus the discussion on the topic at hand.

The interviews are brief, presenting vignettes rather than a fully formed argument describing the future architect. This means that further independent investigation on the part of the curious reader is required. The interviews cover a wide spectrum and mileage will vary from reader to reader.

Reinier de Graaf and Laura Baird of AMO are natural headliners for a book like this. Springing from the loins of OMA …

A summary of two of the interviews:

Reinier de Graaf and Laura Baird of AMO are natural headliners for a book like this. Springing from the loins of OMA, they have been involved in exactly the kinds of projects and forums Future Practice is advocating architects engage with, such as a graphic identity for the European Union, studies on urban preservation and the Roadmap to a Resource-Efficient Europe.

Bryan Boyer of the Helsinki Design Lab presents a clear description of how and why architects matter outside of architecture offices, defining strategic design as “giving shape to decisions” and positing that while all design disciplines synthesize physical constraints with aesthetic and cultural concerns, it is architects who are trained to do this at a scale that brings them into closer contact with the economy and politics and into a position where they might give shape to decisions at a policy level.

The book is occasionally too quick to describe “building” pejoratively: there is a suggestion that the design of buildings may not be relevant in city-making in any meaningful way. This seems to be part of a trend (at least locally here in Sydney). Everything around buildings is discussed with great vigour – procurement, policy, community and agency – with the built outcome just the sausage extruded out the end. Perhaps the truly radical act for an architect or architecture office in these times, then, is to design, document and oversee the construction contract for a building.

The publication of Future Practice coincided with the 2012 Venice Architecture Biennale, where the Australian pavilion presented the work of six architecture practices, including the team from The Architects radio show. Hyde has provided the profession with a snapshot of ways in which designers and architects are inserting themselves into the mechanics of city-making through alternate avenues, be it as Trojan horse or card-carrying professional, and their trajectories will provide fascinating viewing as they continue their work influencing the shape of the city.

Future Practice: Conversations from the Edge of Architecture by Rory Hyde is now available through Routledge.

From the Architecture Australia (Nov/Dec 2012) dossier on “competitions, exhibitions and events of 2012.” 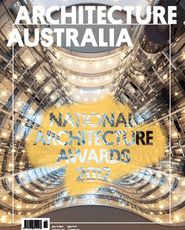