The Perth that never was

Ahead of the opening of Elizabeth Quay, an exhibition at the Museum of Perth explores the unrealized schemes for Perth’s waterfront.

An 1833 proposal by John Septimus Roe for “magnificent, topographically interesting public park” stretching all the way back to St Georges Terrace.

Construction on the public realm of Perth’s much-anticipated waterfront development at Elizabeth Quay by ARM Architecture and Taylor Cullity Lethlean is drawing to a close. Its completion will be a landmark moment for the city, delivering a major, urban public space that will serve to connect the CBD with the Swan River.

For over a century, Perth’s waterfront has “acted as a veritable sinkhole for proposals” that could transform its urban character.

Ahead of Elizabeth Quay’s completion, the Australian Urban Design Research Centre’s (AUDRC) Julian Bolleter combed through the archives and unearthed more than 200 alternative schemes for the waterfront. His exhibition, Take me to the river: Alternative stories of Perth’s foreshore (and accompanying book) imagines what could have been by visualizing what Perth might have looked like today had the schemes been successfully delivered.

“The Perth foreshore is quite unique in that there’s been hundreds of schemes for it since European invasion or settlement and not much has been built,” Bolleter said. “It sort of reflects this lingering insecurity about its identity. Perth has always been very focused on keeping up with the rest of the world. [The waterfront] is a highly symbolic stretch and Elizabeth Quay is part of a larger story about how Perth reimagines its foreshore.”

The schemes range from an 1833 proposal for “a magnificent topographically interesting public park on the river’s edge” to a Statue of Liberty-style sculpture of the headless Indigenous warrior Yagan to be constructed in the middle of Perth Water in celebration of the city’s bicentenary in 2029.

Bolleter explained that the proposals he’s unearthed tended to follow global movements in urban design of their times. “In the early 20th century, it was very much about a civic landscape, which relates to the Garden City movement and the City Beautiful movement in full swing in both Europe and the US.”

This is seen in a 1914 proposal from a Perth town clerk William Ernest Bold for a ring of parkland surrounding the city on all side.

“Shift to the 1990s and a lot of the schemes proposed excavating the reclaimed land and retracing original shorelines,” Bolleter continued, referring to the 1991 competition-winning submission from Carr, Lynch, Hack and Sandell which proposed to recreate a naturalistic landscape along the foreshore. “There was an attempt to re-naturalize much of Perth Water, reflecting an increasing recognition and value in Indigenous culture.”

Finally, the current schemes are emblematic of the idea of Perth discovering its urban identity. Perth is in the midst of an urban renaissance and the schemes for the waterfront, which proposed to urbanize what were parks, are really reflective of the desire for Perth to become activated, urban and dense city – a ‘real’ city.”

Despite the hundreds of proposals, few have made the transition from the drawing board into reality.

“The public have been generally against it,” Bolleter said. Indeed, a 2012 survey in the West Australian revealed 57 percent of the public objected to the current foreshore redevelopment announced in 2011.

But the proposal that really hit a collective nerve was the 2008 scheme by ARM Architecture, Richard Weller, Roberts Day Group and Hocking Planning and Architecture. The scheme, which included a circular inlet and an esplanade surrounded by high rise buildings, was dubbed “Dubai on the Swan” by the local press – a moniker which stirred “xenophobic suspicion of ‘foreign ideas.’ ”

“It was a real shame,” Bolleter lamented. “It was a beautiful circular scheme and it had a real elegance to it. In an ideal world, I think that one might have found some physical expression.”

Bolleter’s personal favourite is a 1930 proposal for a 120-hectare artificial island in the middle of Perth Water by engineer Frank Vincent. The island was to include private dwellings, golf links an aerodrome and a shopping centre. This scheme was also “stymied by political and public opposition.” One letter to the editor published in the West Australian suggested that the authors of such proposals should be lynched.

But Bolleter wonders what kind of legacy this island could have left. “At the AUDRC, we’re interested in what kind of urban conditions might that island have incubated over that time? It could have actually been quite an extreme urban form. Perth’s Crown Casino might have ended up there.”

What all of the proposals have in common is that they tend to tap into a couple of narratives about Perth’s identity.

“One is that Perth is just an overgrown country town, it’s Dullsville, it’s not a real city,” Bolleter explained. “At the same time, there’s an urban renaissance underway.”

The patch of earth between the CBD and the river, which has existed as an under-utilized aircraft landing strip-shaped park, is the symbolic “front lawn” of the city, which explains “the hysterical and polarized reactions to many of the schemes for the foreshore,” Bolleter said.

“In a way, arriving at a scheme for Elizabeth Quay is very much a larger story about what it means, what Perth is all about and what its identity is.”

Take me to the river: Alternative stories of Perth’s foreshore is on exhibition at the Museum of Perth until 23 January 2016.

The accomanying book is published by UWA Press.

The Perth that never was 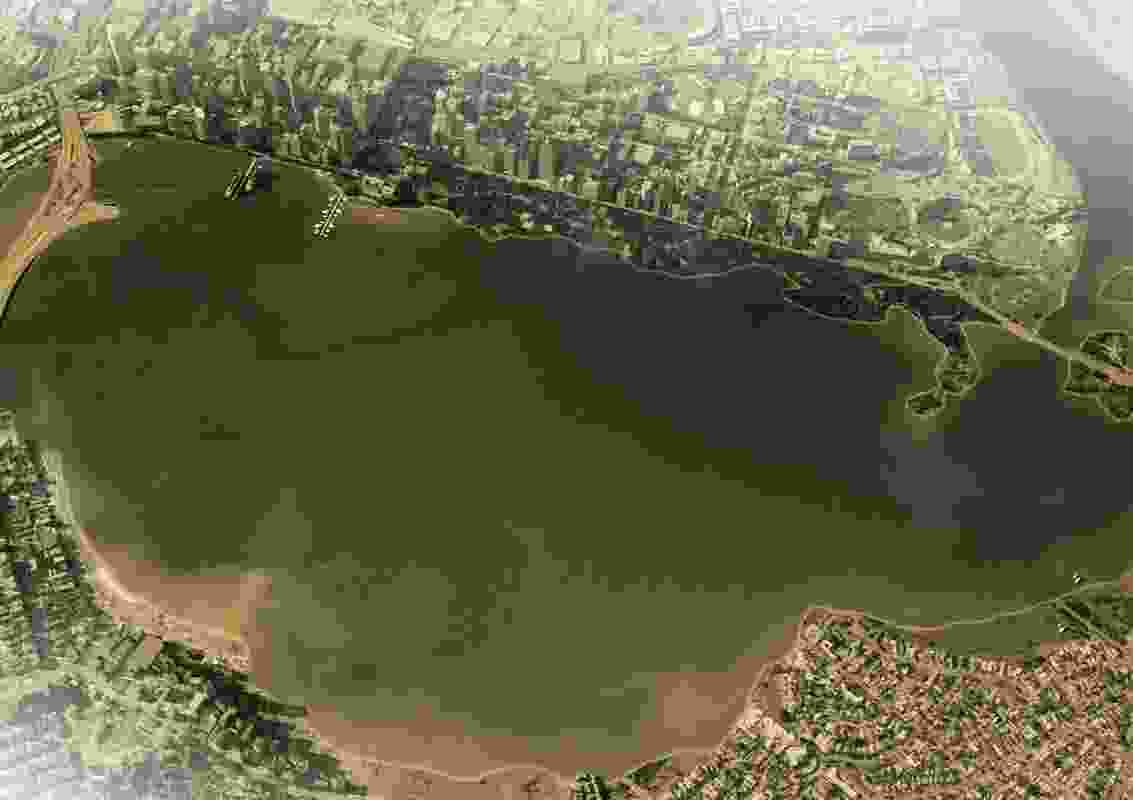 An 1833 proposal by John Septimus Roe for “magnificent, topographically interesting public park” stretching all the way back to St Georges Terrace. 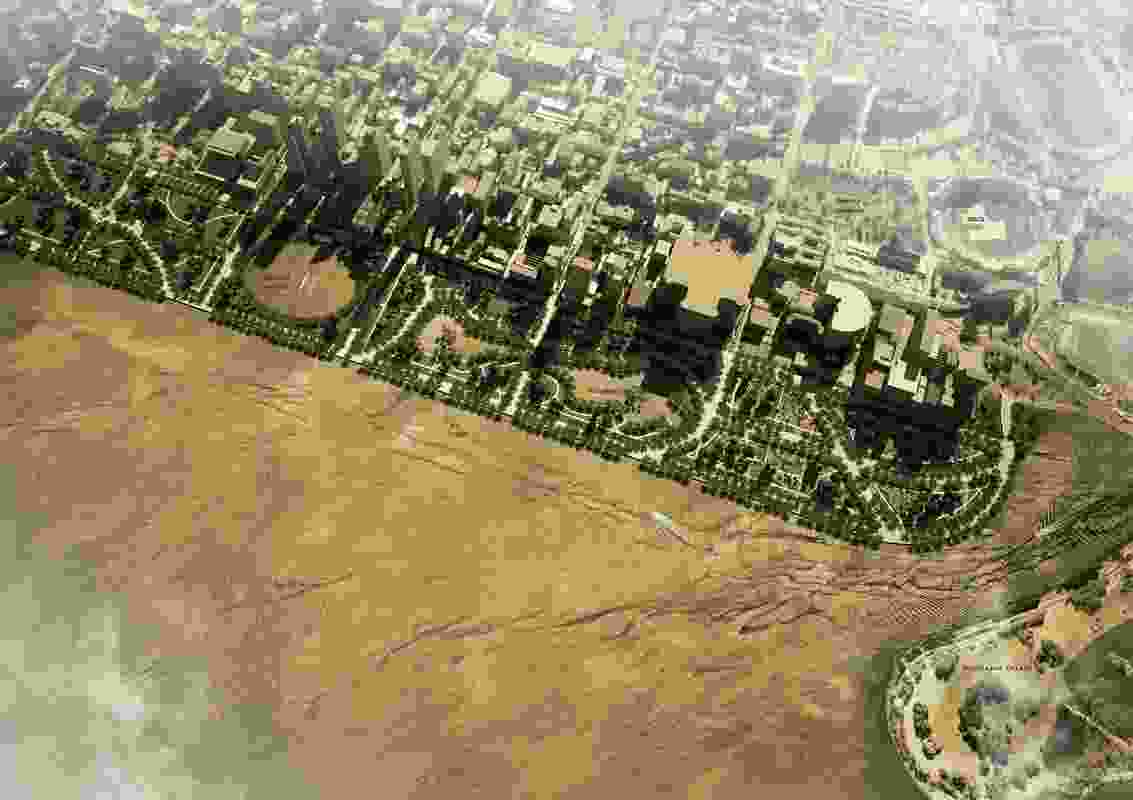 A 1887 plan for Langley Park that included an ornamental lake, meandering walks, a scenic drive and a dedicated cricket ground. 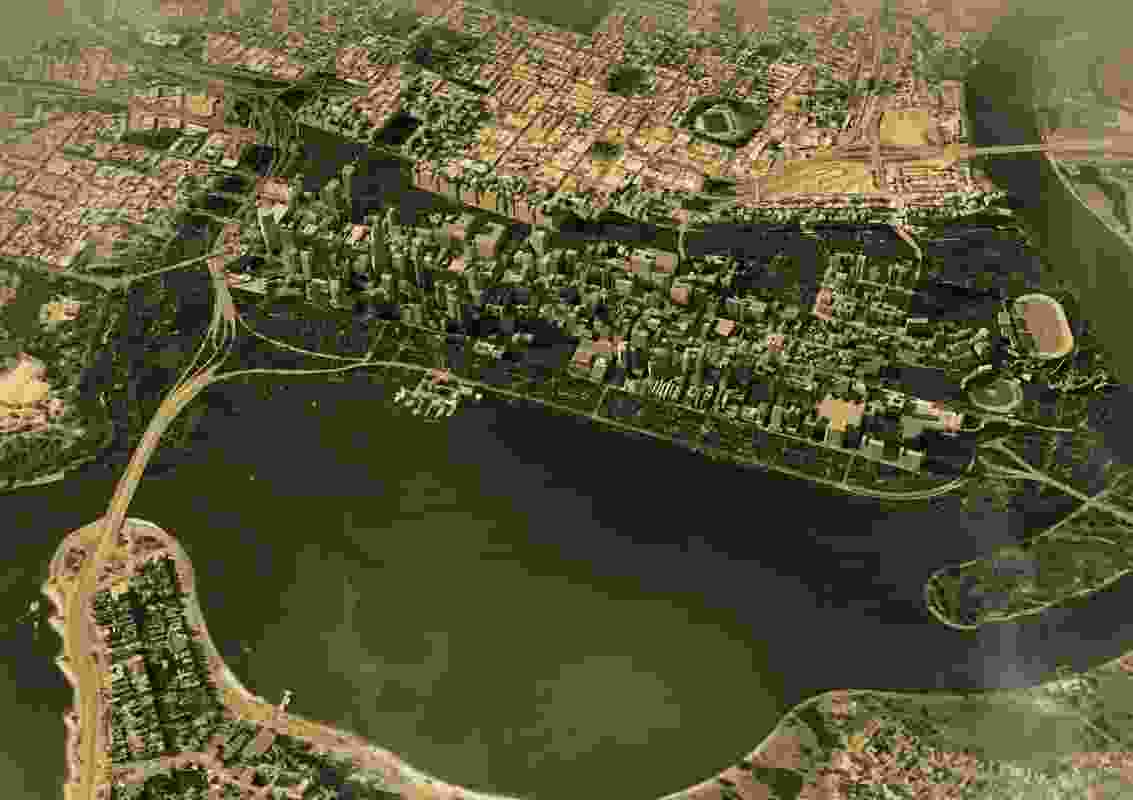 A 1914 proposal by William Ernest Bold to surround the city on all side with a ring of parkland. 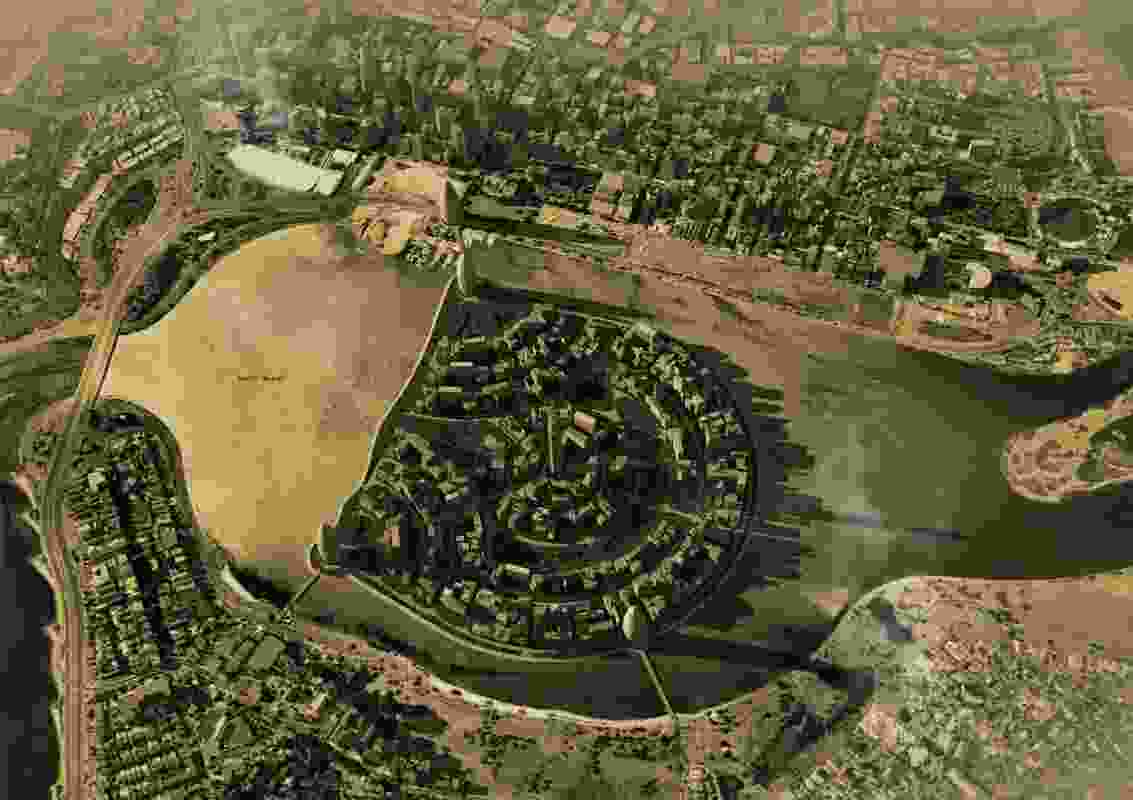 A 1931 proposal from engineer Frank Vincent to create a 120-hectare artificial island in the middle of Perth Water. 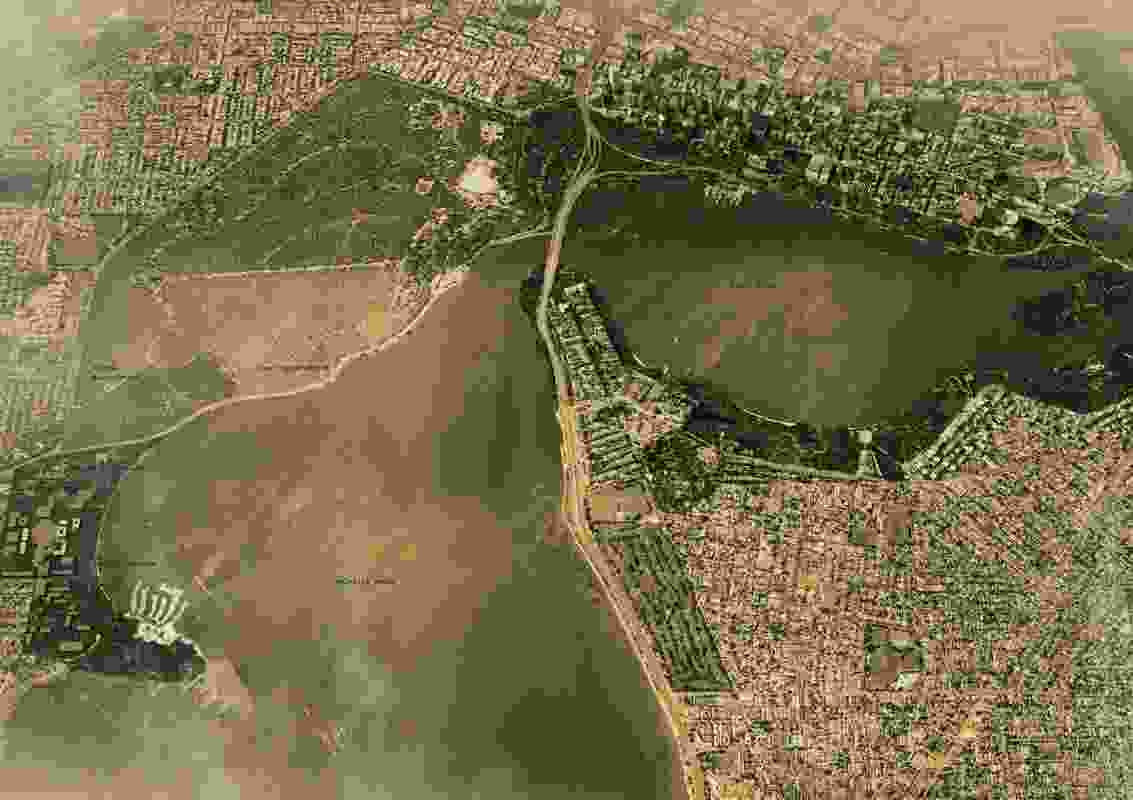 A 1957 plan by landscape architect John Oldham to create a botanic garden that would have created an urban forest of epic proportions. 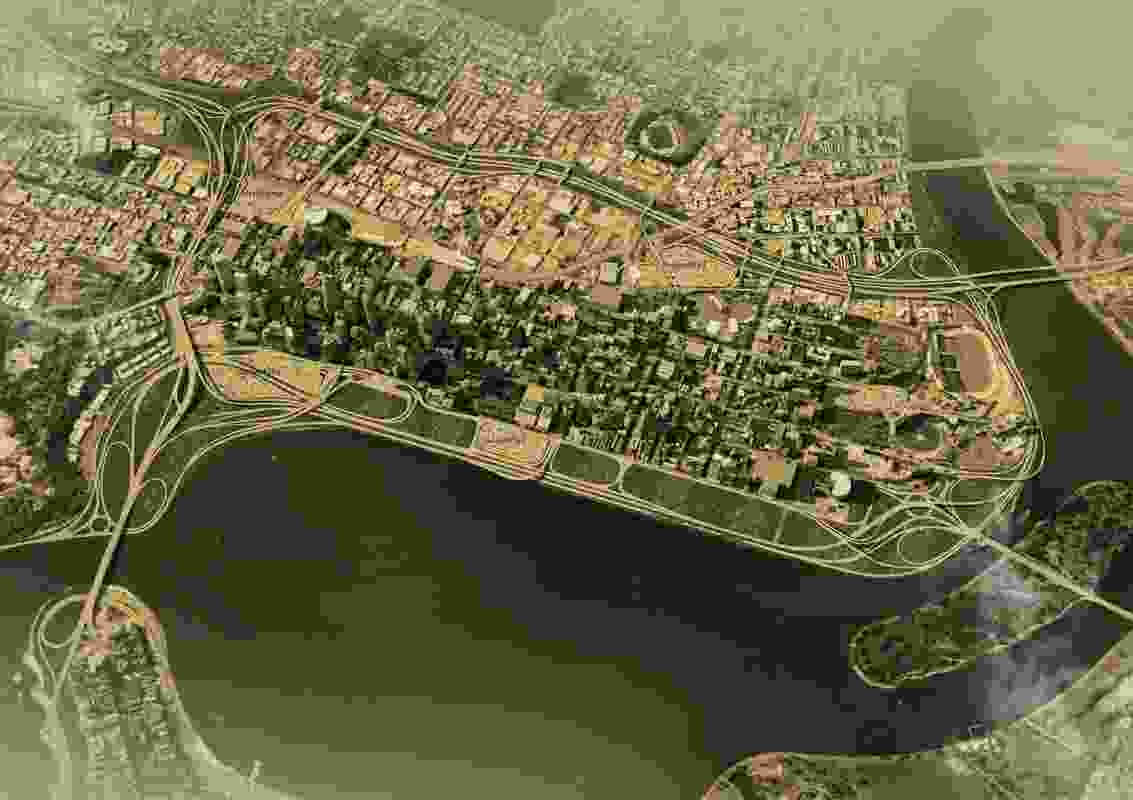 A 1966 plan for a network of freeways around the city. City planner Paul Ritter worked tirelessly to have the south leg of the freeway downgraded. 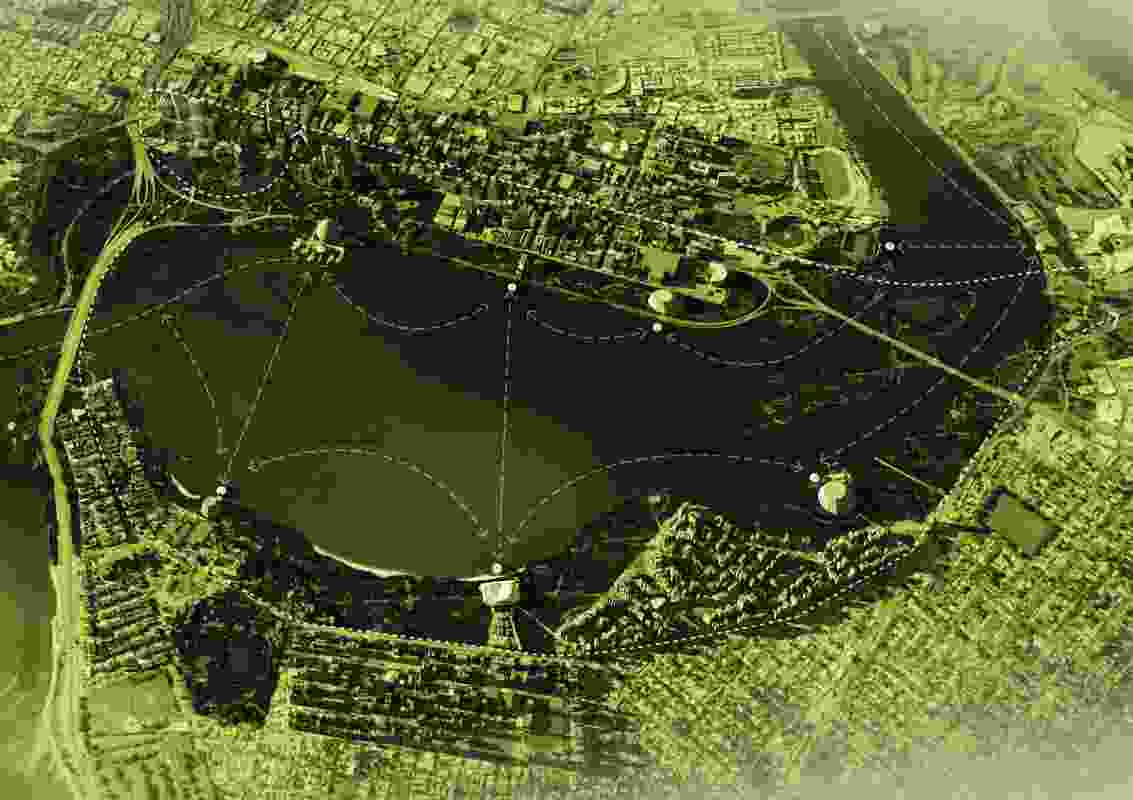 A 1986 plan by Ian Molyneux structured around a high-speed ferry service across Perth Water with a major activity centre at each terminal. 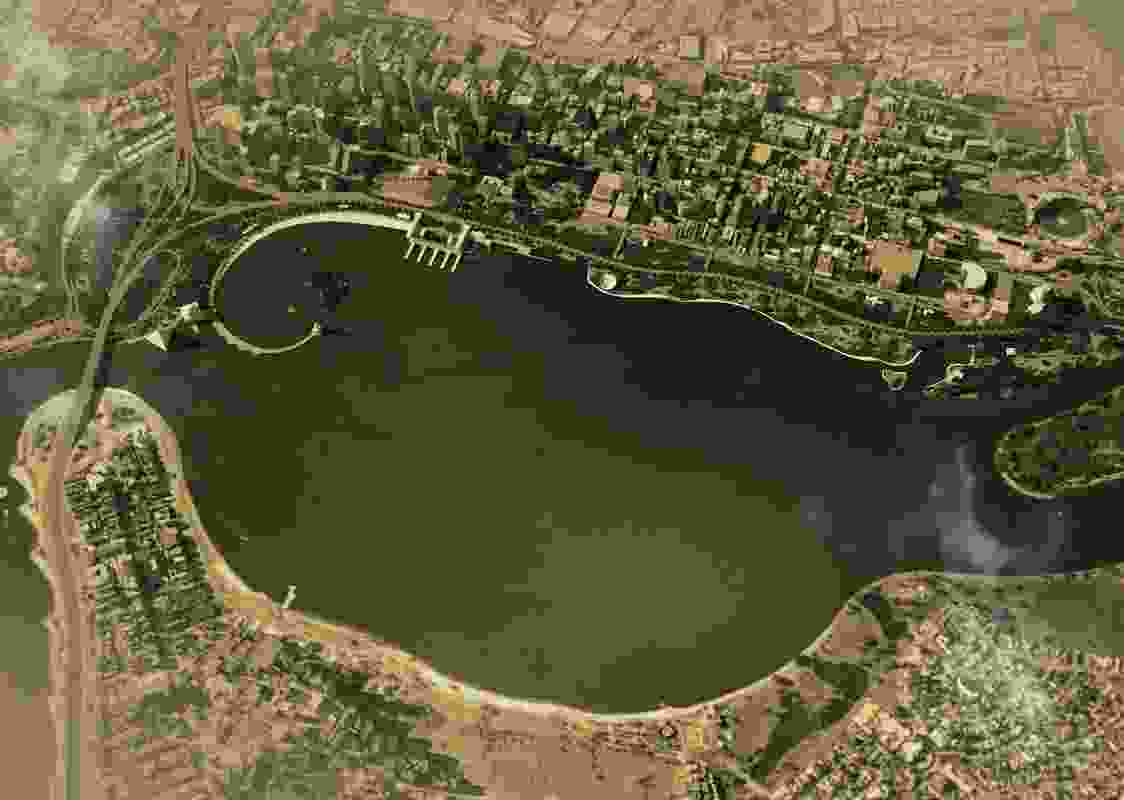 The 1991 competition winning scheme by Carr, Lynch, Hack and Sandell to recreate a naturalistic landscape along the shoreline. 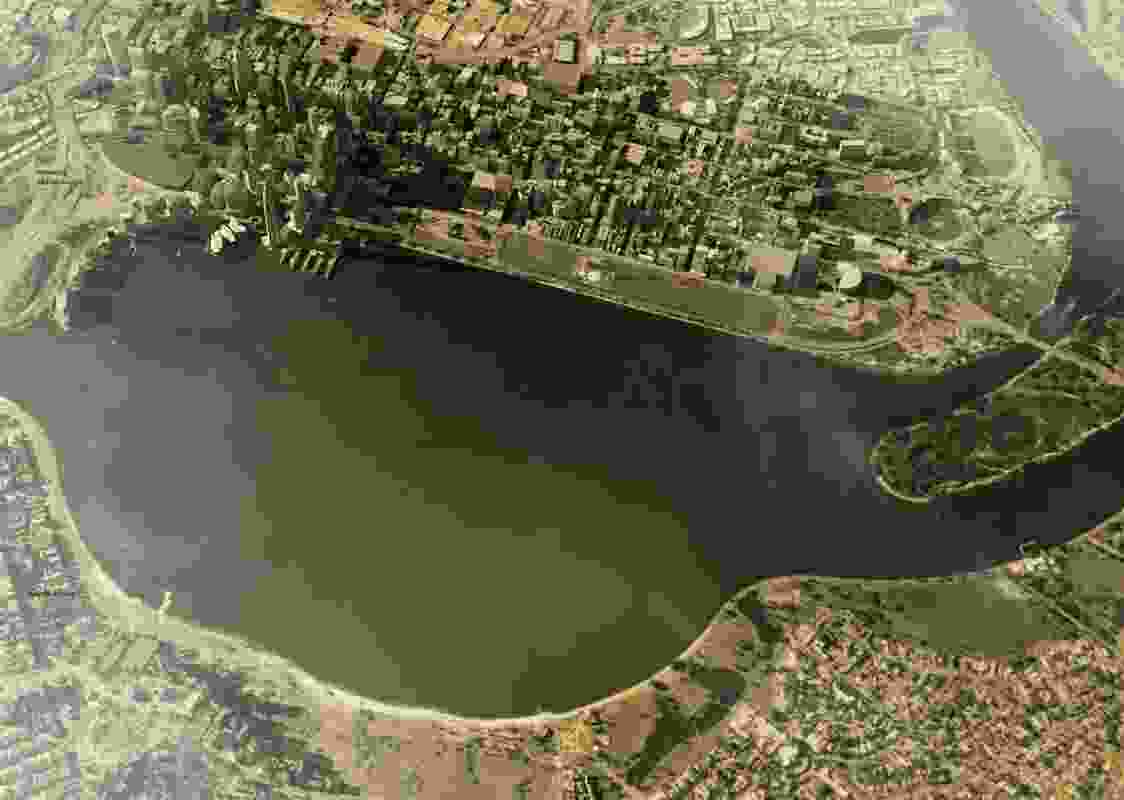 The 2008 scheme by ARM Architecture, Richard Weller, Roberts Day Group and Hocking Planning and Architecture dubbed “Dubai on the Swan.” 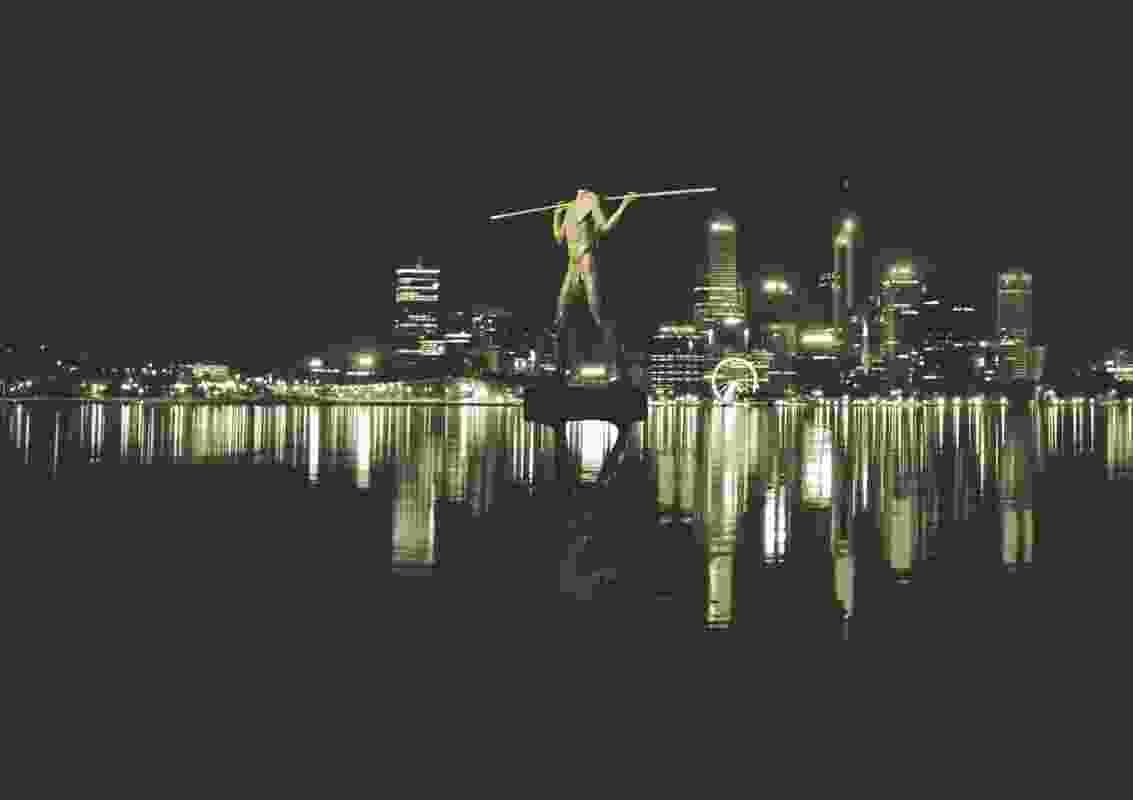 A proposal for a Statue of Liberty-style sculpture of Indigenous warrior Yagan in the middle of Perth Water to commemorate the bicentenary of Perth. 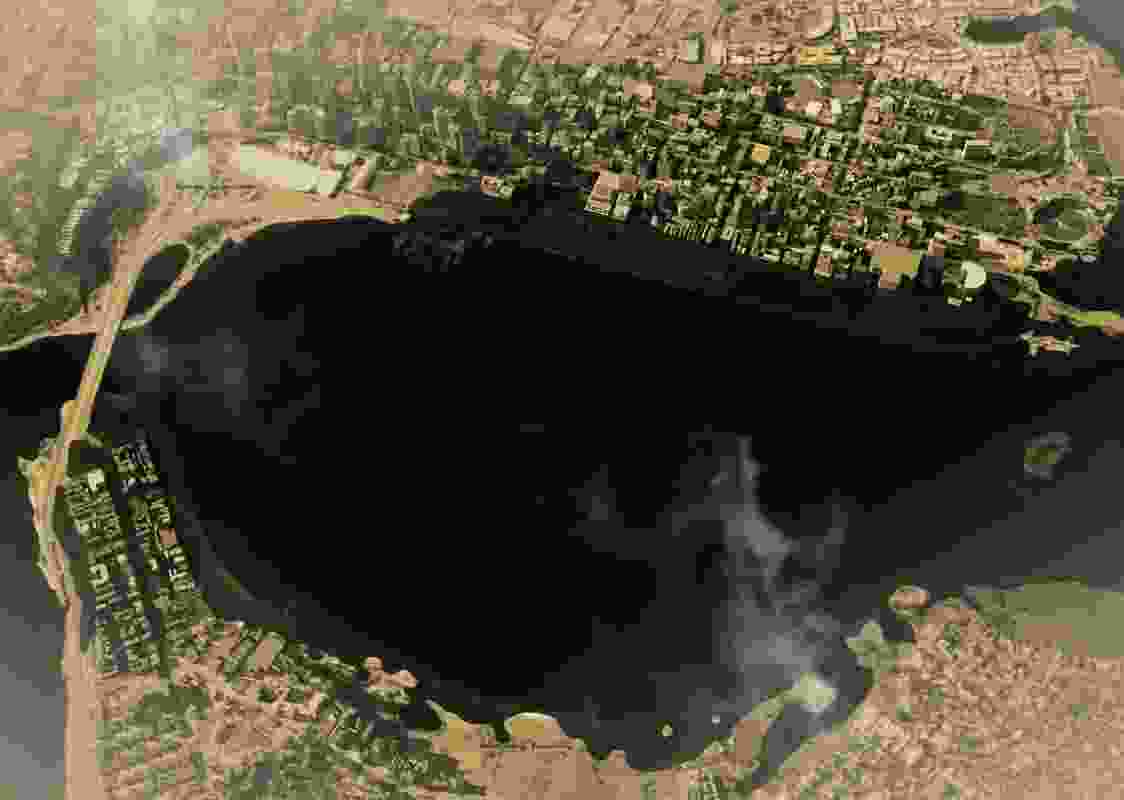 By 2100, a projected one metre sea level rise will “reclaim” many of the land formations of the 19th and 20th centuries including Langley Park, Heirisson Island and South Perth foreshores.