BG Architecture makes a literal connection between the interior and exterior landscaping in a 1920s bungalow.

A photograph by the owner’s father is enlarged and printed onto glass.

It came down to a choice between a serene lily pond, a close up of a bumble bee and the tall, feathery seed heads of native grasses. The grasses won, and the photograph, taken in Botswana by the father of the house’s owner, was enlarged and the image printed onto glass that covers the wall behind the kitchen and its continuation in the adjacent rear courtyard.

The image, a cropped section of a larger photograph, was chosen in response to the owner’s request for BG Architecture to inject something unique into his house - a two-storey, 1920s bungalow in a Melbourne bayside suburb.

“We came up with the planning concept very quickly, as it was obvious to us how to zone the space,” says one of BG’s directors, Adam Grundmann. “But when it came to articulating the design and the aesthetic we had a few concepts. For the kitchen wall we designed quite a beautiful timber facade. Both owners, Richard and Natalie, said they liked it, but then asked, ‘How is this house going to be different from any other house? How is it going to express us?’ It was fantastic to have clients who questioned things. That’s when we probed a little further and found out that Richard’s father is a very good amateur photographer. We thought that digital glass might be a good way to use one of his photographs and it’s become the house’s main design feature.”

The glass wall is certainly eye-catching, stamping the house with a distinctive character and giving rise to the name “the Savannah House.” The wall’s subject matter and colour - a refreshing emerald green - also connect the interior to the landscaping.

“The rear courtyard isn’t huge,” says Adam. “Using a photograph of a landscape and continuing the image outside visually increases the amount of landscape in the back garden and gives continuity between the exterior and the interior.”

At the rear of the new living area, floor-to-ceiling glass frames a view of the north-facing courtyard, where a large, old yucca cuts a sculptural silhouette beside a teal-green lap pool. Inserted into the rear wall of the kitchen at bench-height, a horizontal window acts as a splashback while also framing a lush view of bamboo planted just outside. Given that bamboo is also a grass, there’s a unity of form between the image on the glass and what’s framed by the window: the bamboo is an extension of the captured image, but moves with the breeze.

The landscape not only surrounds the house but infiltrates it as well. A wide garden bed slices through the building, separating the original part of the house from the new single-storey living area addition, with an enclosed bridge providing access between the two. On the southern side of the living area, horizontal windows at floor level dissolve the boundaries between inside and out, drawing the garden bed into the room. The placement of the windows also maintains privacy for the master bedroom’s ensuite and a guest bathroom, both in the original part of the house, which look out onto this courtyard.

“The central courtyard was one of the first planning decisions we made,” says Adam. “It defines and separates the zones, but was done primarily to allow northern light into the middle of the house.”

The original part of the house was reconfigured to improve the flow between rooms and better suit the needs of the family. Downstairs is the parents’ domain. Two original bedrooms on one side of the hallway are now a library-cum-study and the original dining and living rooms on the other side function as the master suite. Upstairs is the children’s wing, with three bedrooms sharing a refurbished bathroom and a large L-shaped living space that opens onto a sunny deck with views of the bay.

It is only from one of the children’s rooms upstairs that an important feature of the house can be spied. Twenty-four solar panels cover the roof of the new living addition, providing about 50 percent of the house’s electricity needs. “The renovation was all about incorporating green energy fixtures, like acoustic ceilings, solar panels and rainwater tanks,” says Natalie. “You can’t see a lot of the investment that went into this house but, for us, incorporating it was a moral choice.”

However, the time and effort invested in the planning and decorative elements of this very detailed house are plainly evident. And it can be said that the colour green pervades the entire building, figuratively as well as literally. Natalie, an interior designer herself, worked closely with the architects, so her admission to a fondness for green comes as no surprise. With her stated passion and her skills, there was no way that this house could not have reflected the personalities of its owners. 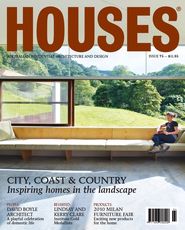 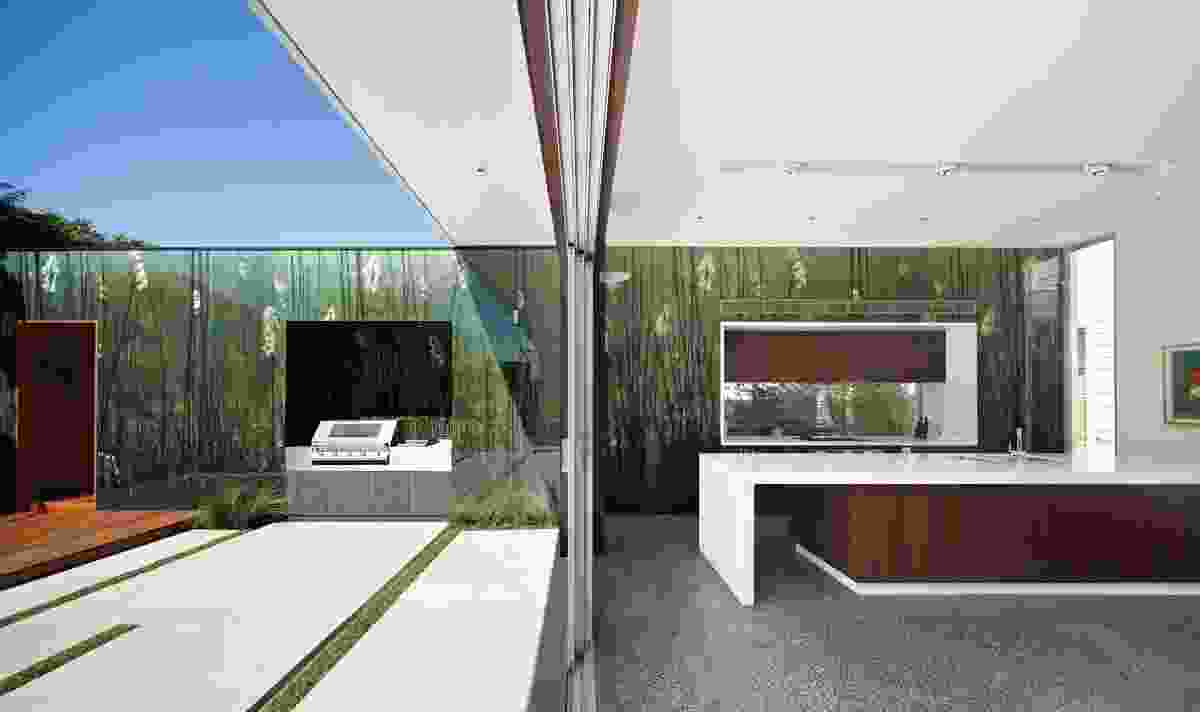 A photograph by the owner’s father is enlarged and printed onto glass. 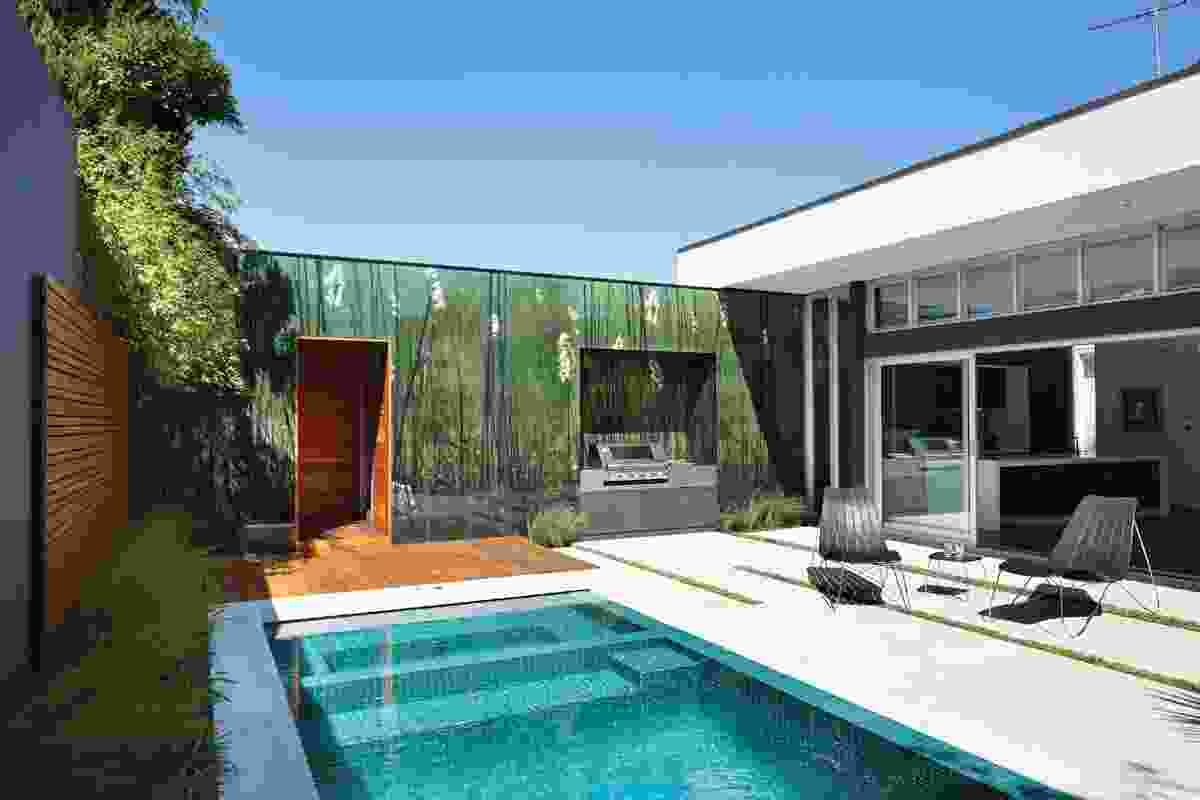 The glass wall gives a striking backdrop to the rear courtyard. 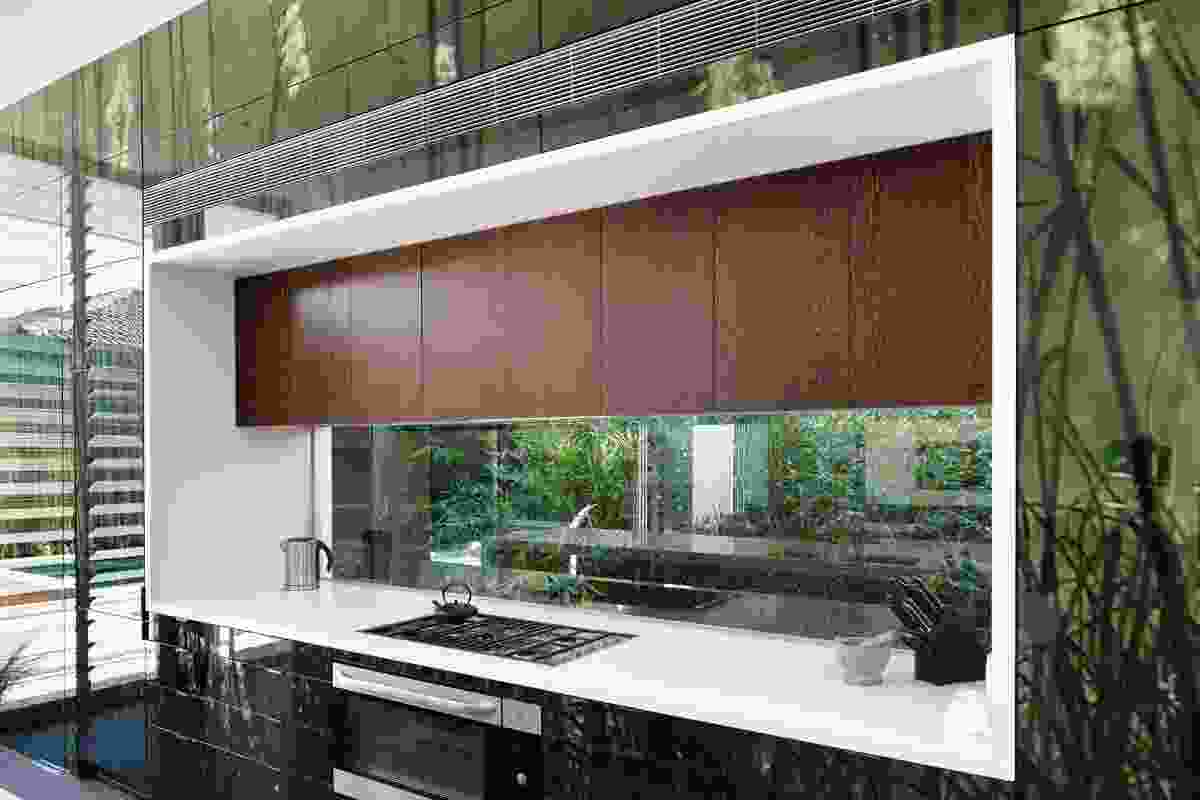 A horizontal window acts as a splashback for the kitchen bench.