Central to the deign is a black box-like joinery unit housing the kitchen. It is subtle and unexpected, and the kitchen’s function is not immediately apparent.

There is a real sense of theatre in this elegant apartment. Not in the sense of showiness; rather, it is in the very carefully executed mise en scène of each space. With that in mind, it’s not surprising to learn that both architect Steven Whiting and designer Carole Whiting have a background in art direction and film. There is a lightness of touch in the way materials are layered and, a focus on the temporal and visceral aspects of the site – a captivating vista of grass, sea and sky, gazing out to Melbourne’s Port Phillip Bay.

The home has also benefited from a personal connection between designer and client: it is the seventh project that Steven and Carole have collaborated on with clients Bruce and Margaret. Their previous work for the couple include city residences, holiday homes and a serviced office development.

Interestingly, what has resulted in a lovingly tailored home began as a speculative multi-residential project. A nondescript house on the waterfront site was demolished to make way for the two apartments, one atop the other. Beneath, there is a capacious basement-level carpark. As the project progressed, the clients soon realized that the magnificent view and soothing interiors were too special to pass up.

The spatial arrangement within evidences the architects’ effortless combining of practical considerations and clever design. On paper, the rectilinear forms are deceptively simple; in real life, the timber-panelled planes are enlivened by an array of sliding walls and concealed doors that open and close, transforming the space with each manoeuvre. “The interiors are very architectural – our aim is to create a landscape, to conceal and reveal,” Steven says.

Central to the design are two joinery units – one black, one white – that give the plan structure. They read as boxes floating within the space, housing the kitchen and laundry, a second bathroom and a bountiful supply of storage. The kitchen layout plays with this concept of insertion – two discrete joinery units, one concealing the mess and clutter, are positioned around an elegant maple table that acts as an island bench. The kitchen doesn’t immediately reveal its function – it is subtle and unexpected, traversing the intersection of architecture and furniture. The appliances are housed within the black box, backed by a playful monochromatic mosaic splashback and surrounded by a smooth black benchtop.

“It’s a continuous piece of ceramic tile with no joins. It’s the first time I’ve used it, and it really suited Margaret’s request for something new,” Carole explains. “We like the idea of dual purpose and ambiguous spaces. We generally don’t do the big marble-slabbed island bench that just says ‘kitchen.’”

The idea of floating elements is also articulated in the main bathroom and bedroom. Narrow windows have been inserted between the internal and external walls, slicing and curating the view and making it visible from entry. Preventing the walls from abutting creates a kind of levity in the architecture – while it is undoubtedly sturdy and solid, there is a feeling that the elements have been painstakingly arranged just so, touching lightly and endlessly reconfigurable. A sliding wall separates the bedroom from the living space. “They can shut it off when they have guests over to make the bedroom private. When they’re alone, they keep that door open so, from the bed, they get that view out as well,” Carole says. Steven adds, “It’s about having an interior that fulfils that dual program – it can operate differently as a private space or a public one.”

The project exemplifies the practice’s love for textural details. Rather than splashes of colour, the interiors experiment with textural elements, from a hefty knotted rug to velvet-like concrete pillars. None of this happens by accident, and it’s clear that the interiors were forged at the same time as the architecture. “It’s a holistic approach – we’re thinking about those interior elements as we’re designing the space. It’s not just about making a building and then bringing the things in. The interiors are an integral part of the project,” Steven says. Perhaps the most vivid example is the dramatic blade wall that slides into the main bedroom from the southern facade. Finished in a striking basket weave ceramic tile, it brings a compelling tactility to an otherwise pared-back space.

At the rear of the building are two further private spaces – a second bedroom and a study. In the study, a large box window is positioned just so, to capture an elegantly framed view of the water through the length of the apartment. Behind, screens of laser-cut steel encase the windows, providing privacy and moderating the western sun. These screens, and the interlocking keystone-shaped timber pieces that line the window seat, demonstrate the designers’ skills with craft and detail. “I like to think our approach is quite crafted,” Steven says. “It’s an idea of functional craft.” 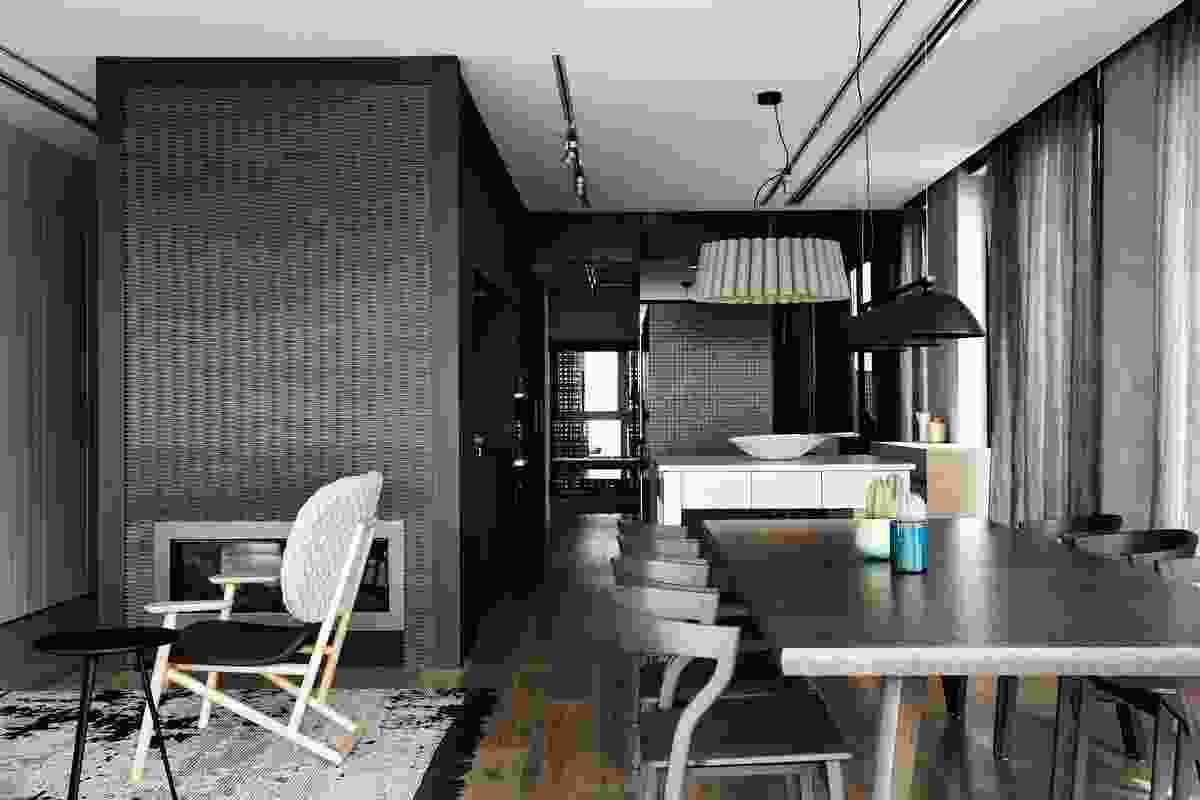 Central to the deign is a black box-like joinery unit housing the kitchen. It is subtle and unexpected, and the kitchen’s function is not immediately apparent. 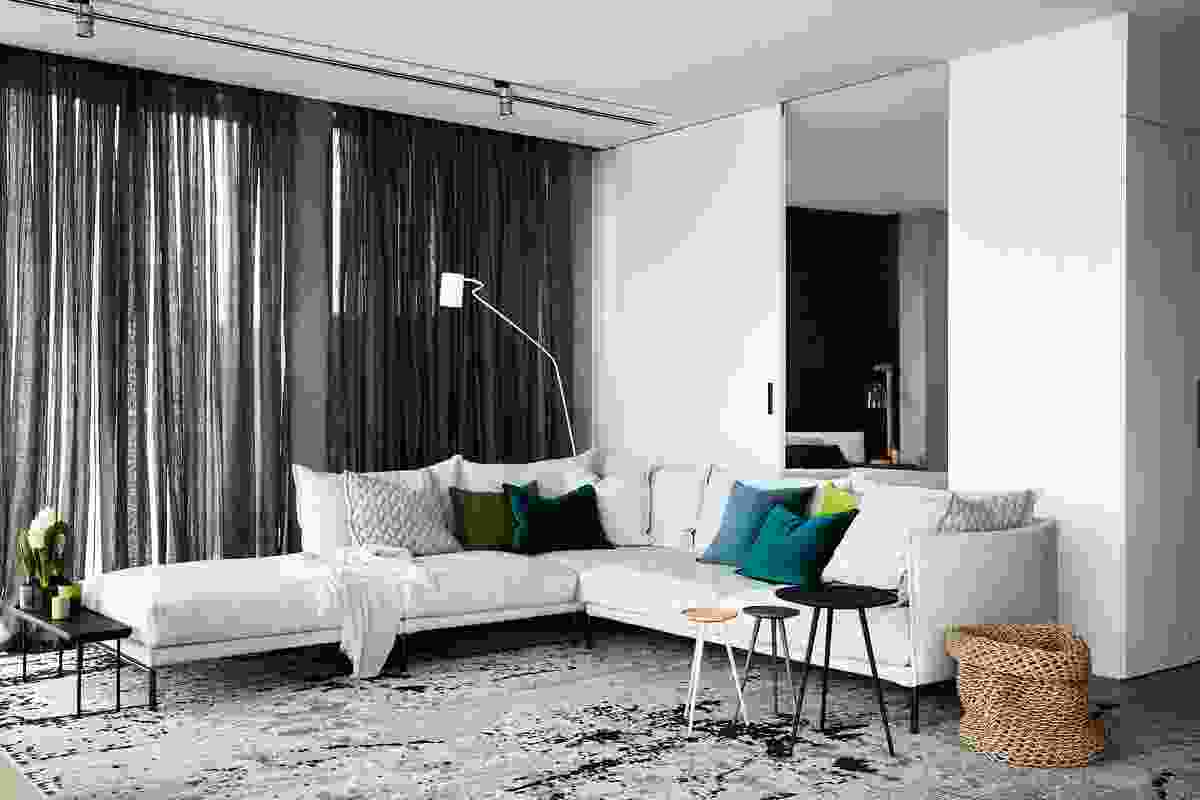 The timber-panelled planes are enlivened by an array of sliding walls and concealed doors that transform the space by opening and closing them. 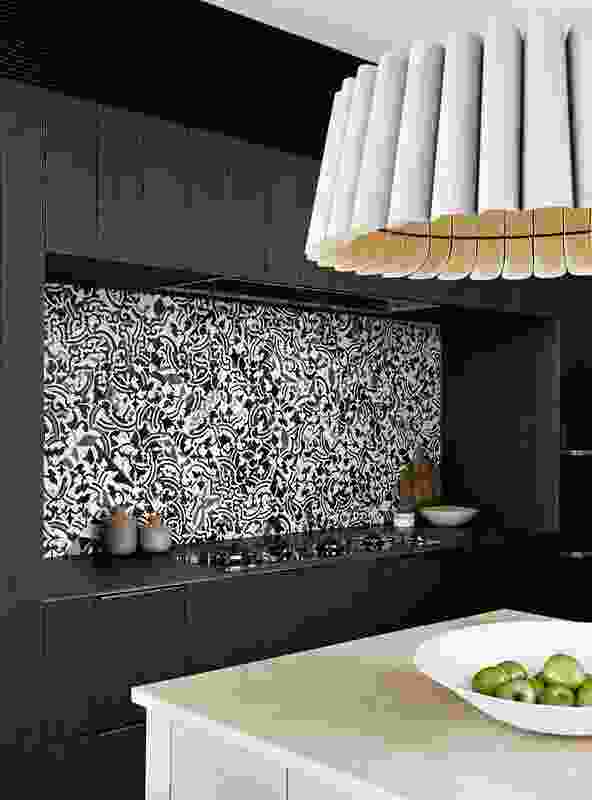 The cooking area is backed by a playful mosaic splashback. 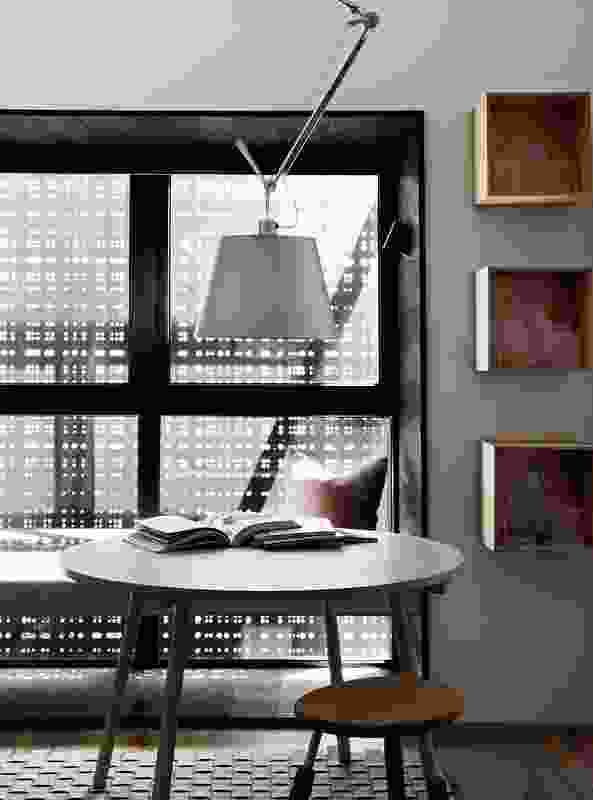 Perforated privacy screens help to break down the natural light and direct views. 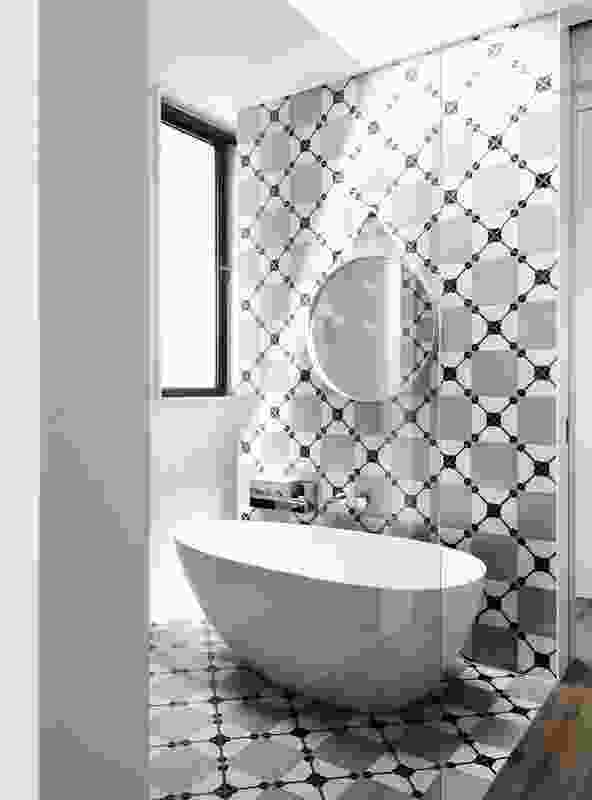 A continuous wall-to-floor monochromatic tile surface makes a bold statement in the ensuite. 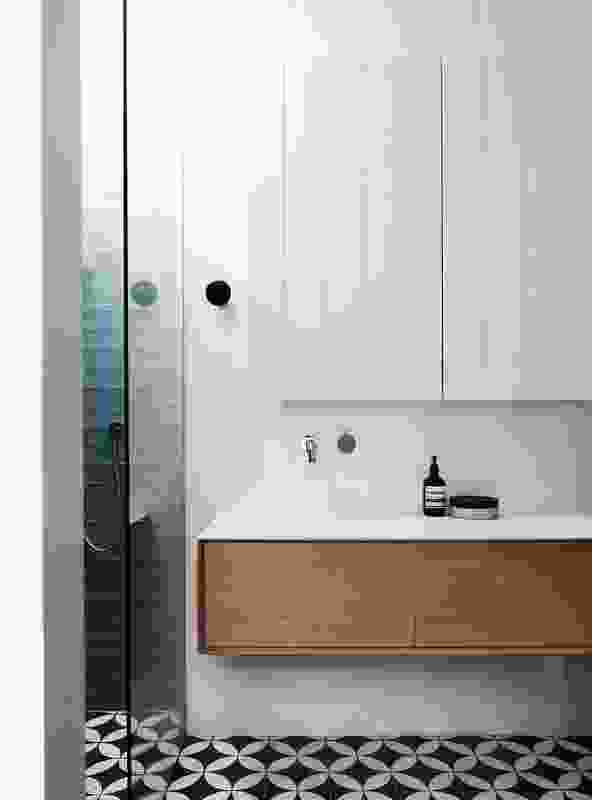 As in the kitchen, the concept of floating elements is articulated in the bathroom. 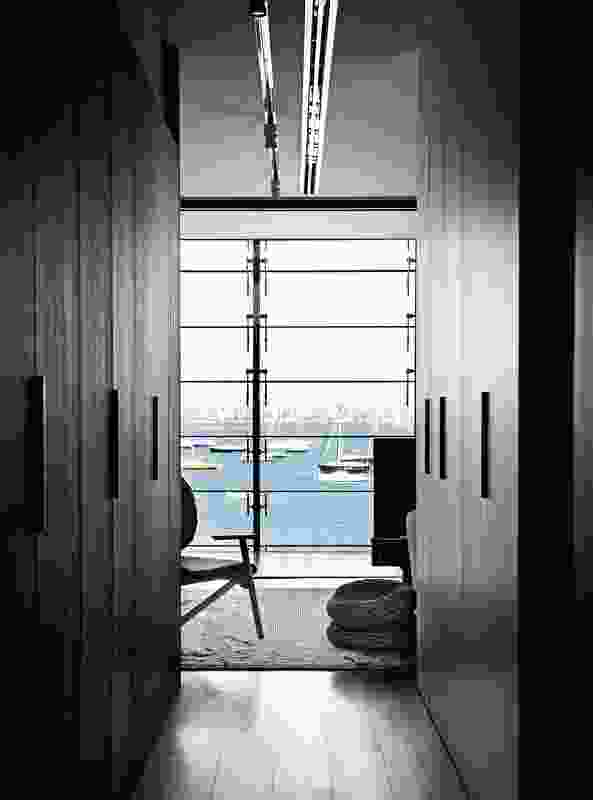 An interior balcony with louvred glazing has views out across the bay. 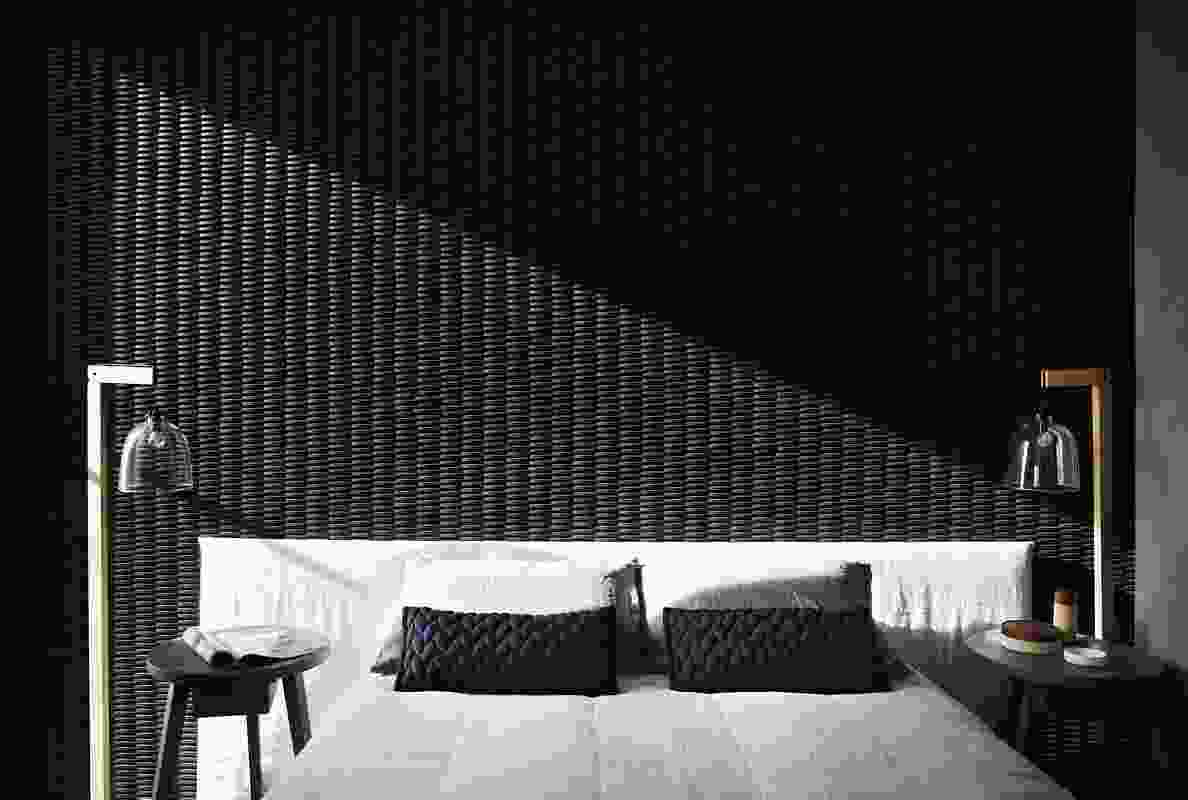 A dramatic blade wall finished in a basket weave ceramic tile slides into the main bedroom from the southern facade. 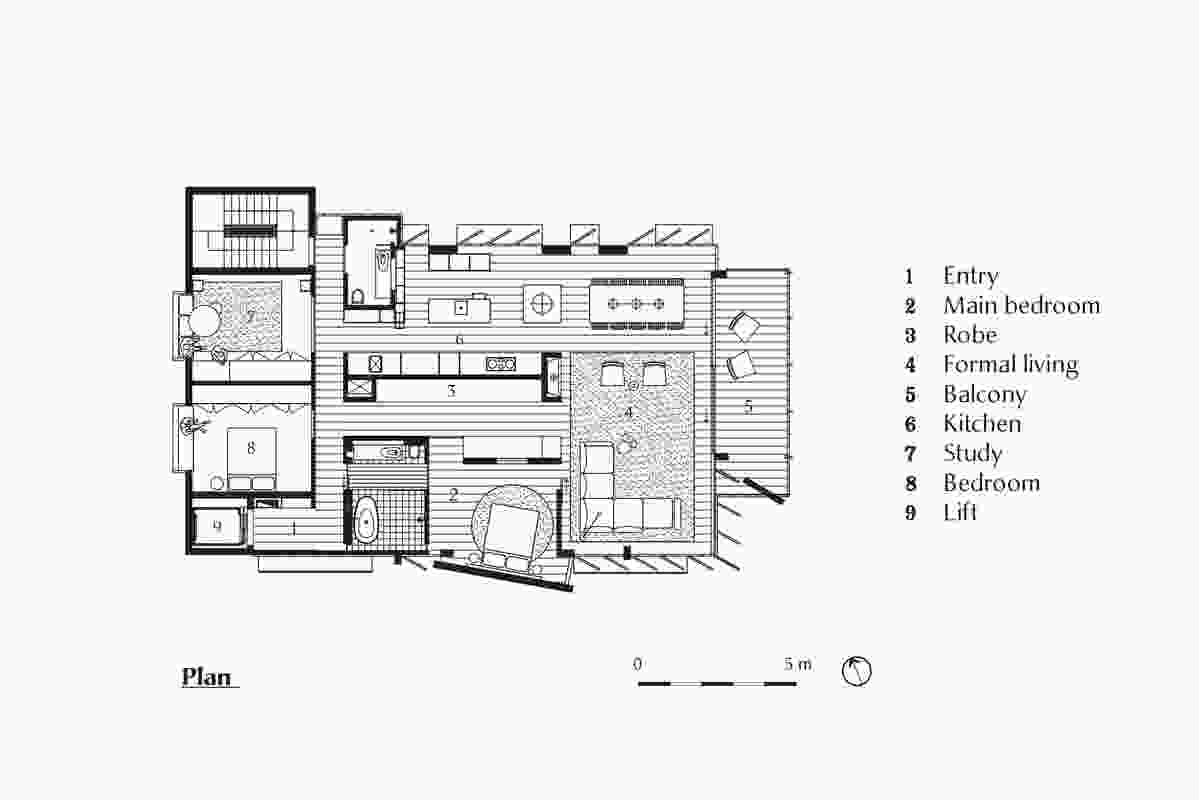