Cristina Garduño Freeman examines the often-overlooked contribution made by Australian architects to the design of the Sydney Opera House and argues that authorial plurality has not diminished the building's success as a public place.

The set of Sydney Opera House — The Opera (The Eighth Wonder).

Last week, on the Monumental Steps facing the Royal Botanic Gardens, The Eighth Wonder was staged by Opera Australia. Alan John and Dennis Watkins’s opera dramatizes the authorial legend surrounding the realization of this landmark building – and to this day, myths continue to play out in the narratives surrounding the Sydney Opera House.

In 2015, the Sydney Opera House Trust announced plans for a long-awaited renewal program at the Sydney Opera House, and several Australian architectural firms – including ARM Architecture, Tonkin Zulaikha Greer and Scott Carver Architects – were commissioned to undertake the much-needed work. The Trust has been critiqued by some for this pluralist strategy. Gerard Reinmuth has argued that such a strategy is unlikely to result in a great outcome, and that instead works at the Opera House should be guided by a single guiding vision. Inadvertently, this criticism reveals how the commissioning of leading Australian firms is a challenge to established tropes in well-rehearsed reviews of the building’s authorship.1

The architectural integrity of the Sydney Opera House has been contested since conversations about an opera house first began in the 1950s. The project was aspirational in a time of cultural cringe and was intended to put Sydney on the map. Heated discussion in the Sydney Morning Herald debated the site, the need for such an expensive government project at a time when housing was desperately needed, and whether the criteria for entry should be limited to Australian architects or open at an international level. The 1956 competition eventually saw entry no. 218 selected as the winning scheme, and little-known Danish architect Jørn Utzon stepped up to face an full house eager for a spectacle. So great became the political turmoil during the building’s realization that Utzon had no other option than to resign in 1966 before the building was anywhere near complete. The Australian architects who picked up the pieces following Utzon’s withdrawal faced an overdue and over-budget project of immense technical and aesthetic complexity alongside a politically charged second act.

In spite of these tumultuous beginnings, the building has, since its completion, been popularly and critically acclaimed – even world heritage listed. Today the Sydney Opera House is one of Australia’s most recognizable symbols. Interestingly, the central focus of the 40th anniversary celebrations in 2013 was the building’s Danish heritage.2 In fact, it could be said that the Sydney Opera House represents Australia through a conspicuous lack of reference to other Australian architecture. So perhaps it is not surprising the Sydney Opera House management team has been prudent in its approach to publicizing the changes.3

The renewal is long overdue. The acoustics and backstage facilities in the Concert Hall and the Joan Sutherland Opera Theatre have been considered sub-par since the building opened in 1973,4 and the lack of equitable disabled access is an urgent issue in an age of universal design. While Utzon envisaged audiences ascending to the performance spaces via the Monumental Steps, many enter from underneath. The renewal program, which takes account of the building’s Conservation Management Plan, accepts the building will change; it takes on the challenge of making the Opera House world-class at every level. The NSW government has committed $202 million dollars to achieving this.

The Sydney Opera House has always been the work of more than one architect and its success as a public place is a testament to the strength of Utzon’s overall vision and the public’s affection for it, regardless of the building’s authorial plurality.

The argument that this renewal requires a single guiding architectural vision is founded on the notion of architectural integrity and authenticity. While Reinmuth acknowledges that a fair judgement cannot be made about the proposed designs from the minimal material published thus far, he suggests that the strategy of commissioning multiple authors is unlikely to produce a great outcome. He cites Richard Johnson’s key role in re-engaging Jørn Utzon in 1999 and the development of the Sydney Opera House Design Principles, published in 2002. He also notes Johnson’s role in the renewal of the Utzon Room, the first and only interior space designed by Utzon with his son Jan. All these events are significant and important, and arguably contributed to the successful World Heritage listing in 2007. However, the Sydney Opera House has always been the work of more than one architect and its success as a public place is a testament to the strength of Utzon’s overall vision and the public’s affection for it, regardless of the building’s authorial plurality.

In keeping with much of the discourse in the architectural profession, Reinmuth does not mention the interior work of Australian architect Peter Hall. After Utzon’s resignation, Hall succeeded in completing the building with colleagues Lionel Todd and David Littlemore, and Government Architect Ted Farmer – despite incredibly difficult political and professional circumstances. Historian Anne Watson’s research into Hall’s contribution reveals that when Utzon left, the building’s interiors, including the performance spaces, were far from resolved and that the building could only be completed with substantial compromises5, some of which the current renewal works address. The purpose of identifying Hall et al. in the building’s authorship is not to excuse or negate these real functional problems, but rather to acknowledge that these architects made a primary contribution in seeing the building completed.

A further challenge to the notion of the architect as authorial genius comes in recognizing the role played by society in making the Sydney Opera House a beloved icon. Much of the literature that discusses the Opera House as an icon connects Utzon’s design with universal forms, evoking spiritual or visual associations embedded in the architectural form itself.6 But its position as an icon is also evidenced in the many small individual ways the building is adopted by popular culture and in people’s personal lives, which contribute to the building’s significance without diminishing Utzon’s contribution.7 Others should also be recognized for their part: Bennelong Point, or Dubbagullee, was a Gadigal meeting place; Ove Arup, Peter Rice, Ronald Jenkins and Jack Zunz engineered the building; firms including Johnson Pilton Walker and Freeman Ryan Design have shaped it since “completion,” and others will do so into the future. The obsession with a single vision of authorship distracts us from a more diverse and inspiring tale where credits roll beyond the star to the supporting cast and even the iconic landmark’s loving audience.

If we expect the Sydney Opera House to last for hundreds of years, it’s time we call the curtain on the legend encapsulated by John and Watkins’s opera, and clear the stage for a new story to be told.

2. The Crown Prince and Princess of Denmark were patrons of the 40th birthday celebrations in October 2013. Gerard Reinmuth and Karen Kjaergaard curated an exhibition of Danish design, Anthony Burke curated a one-day symposium of talks between Australian and Danish architects, and a new architectural student exchange between Australia and Denmark, called MADE, was launched.

4. Andrew Filmer noted the negative effect of the building’s backstage facilities on performers’ experiences in his 2006 PhD thesis. This perspective was confirmed in 2011, when a survey of 200 performers, critics and industry experts in Limelight – Australia’s classical music and arts magazine – rated the Joan Sutherland Opera Theatre as the worst performance space and the Concert Hall as 18th of the 20 venues included. Andrew R. Filmer, Backstage Space: The Place of the Performer, PhD Thesis, Department of Performance Studies, University of Sydney (2006). Melissa Lesnie, Sydney Opera House “Biggest Loser” in Survey, Limelight, September 2011. 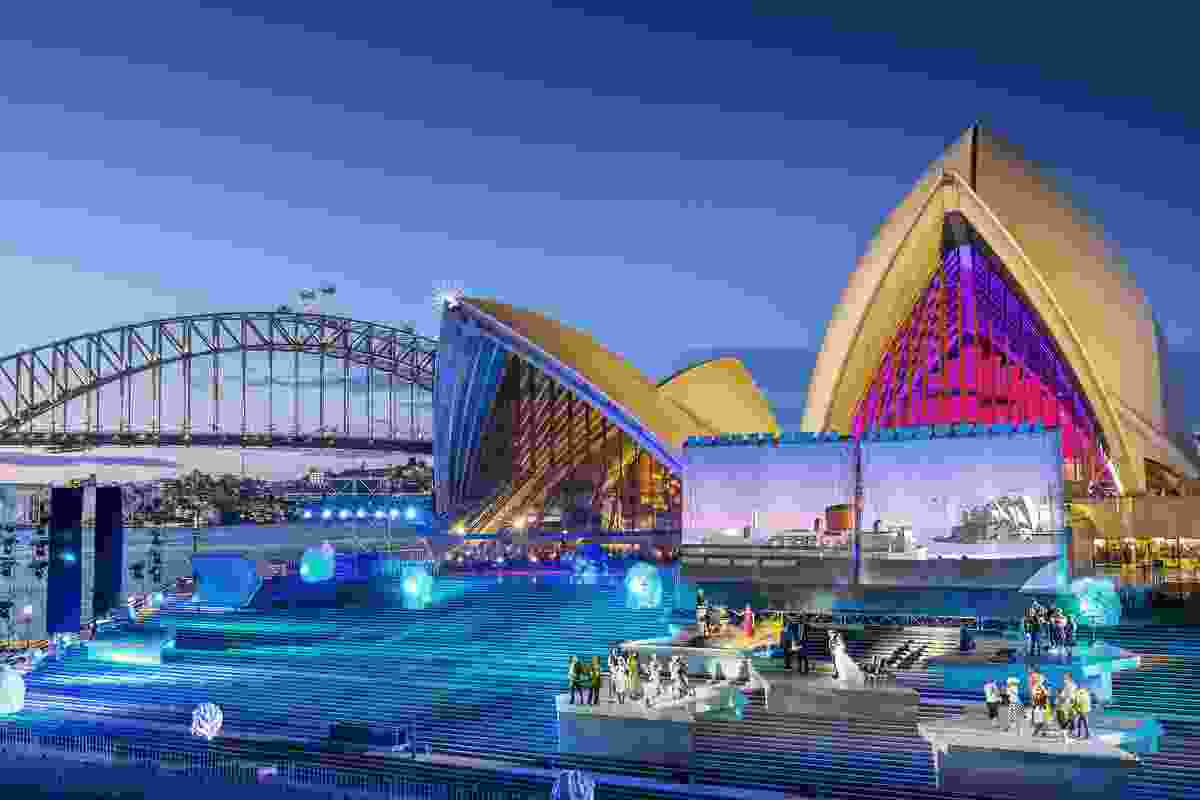 The set of Sydney Opera House — The Opera (The Eighth Wonder).