Referencing the gable roofs of the surrounding beach houses with its abstract, triangular form, this new home provides fuss-free luxury, perfect for a beach holiday.

The clerestory windows, accommodated by the gable roof form, bring in “a world of light.”

Barwon Heads, on the Bellarine Peninsula south of Melbourne, is as charming a coastal town as you could expect to find this close to a major city. It’s laidback and beautiful, with a main street of cafes, fish ’n’ chips and shops that sell indeterminate combinations of vaguely “seasidey” gifts and homewares. A couple of blocks back from here, on the sandy banks of the Barwon River, holidaymakers hire paddleboards and weigh up the pros and cons of dancing across hot asphalt to buy an ice-block because they can’t be bothered putting their shoes on. It’s that kind of place. Fantastic.

The town is expanding, but in its suburban heart many of the new beach houses are being designed to hold on to the spirit of the place. Not by aping historical styles, but through honest materiality and empathy for the relaxed, beachy context. And you’d be hard-pressed to find one that does it better than this new dwelling by Melbourne practice Bower Architecture.

The Villa at Barwon Heads sits a few houses back from the river, on a corner block that presumably could’ve been developed in any number of ways. But the clients, a couple with grown-up kids and grandkids, who also own the neighbouring old cottage, were looking for something more meaningful: a holiday house that would eventually become a home. Their strong attachment to this place is echoed by Bower’s architectural response.

The outside of the house is clad in vertically laid timber and the front is set back from the street to align with the adjacent row of weatherboard cottages. The timber facade wraps around the corner and runs all the way down the long side of the site to the garage entrance at the rear. An abstracted gable shape is extruded through the front of the house, again aligned with the neighbouring cottages, and is expressed in profile as an emphatically triangular vertical protrusion. In concert with a couple of glazed incisions in the facade, which reveal glimpses of life inside the house, and backed by the metronomic consistency of the timber cladding, it gives the street elevation a playful rhythm and makes a wonderful contribution to the neighbourhood.

However, apart from those glimpses of the interior, the facade gives little away as to what the rest of the house might be like. This makes entering the place for the first time all the more delightful. The large black pivot door opens to reveal a world of light: it washes in through the clerestory windows accommodated by the gable roof form, and splashes onto the walls and ceiling in undulating reflections from a brilliant-blue-tiled lap pool.

The house’s L-shaped plan forms a protective perimeter around a private lawn and garden, and enables the house to be opened up almost completely to the outside. It also creates opportunities for beautiful long sightlines. The first is the initial view through the door and out over the pool, which tucks into the elbow of the L. Another, the prettiest, looks down a layered enfilade that links the bedrooms and bathroom: the rooms are on the left; an internal walkway and thin outdoor deck run down the centre, separated by full-height glazing; and on the right is the pool, visible through a widely spaced timber batten screen. In the morning, the sun casts shadows of the battens onto the floor and interior walls in slanting stripes. And on warm nights, with some of the glass panels slid open, the breeze floats in over the water to cool the interior.

That passive cooling technique is aided by the clerestory windows, some of which can be opened to create a thermal chimney effect, drawing warm air up and out of the house through the roof above the main living space. It’s clever but also very simple, and perhaps that is what’s most beguiling about this house. The living space is elegant and refined, with a neutral materials palette that includes a luxurious marble island benchtop and large-format floor tiles cut from striated stone, yet what you notice is the space, not the container. Detail has been stripped out, including doorhandles in some places, leaving seamless surfaces crafted to play with the abundant light and attendant shadow. The living space flows out onto a deck area, which in turn steps out onto lawn, creating a view that leads the eye out through the glass to the garden and sky.

The overall feeling is of subtle luxury, free of pretence or fuss, uncluttered with detail, as the best beach holidays are. A side door from the laundry provides more immediate access to the beach, and there’s an outdoor shower for getting rid of sand before coming back in. Standing here, with the door open and the sun beating down, you can just imagine the conversation: “Geez, d’you reckon I can make it down the road to the beach without my shoes?” It’s that kind of place. Fantastic. 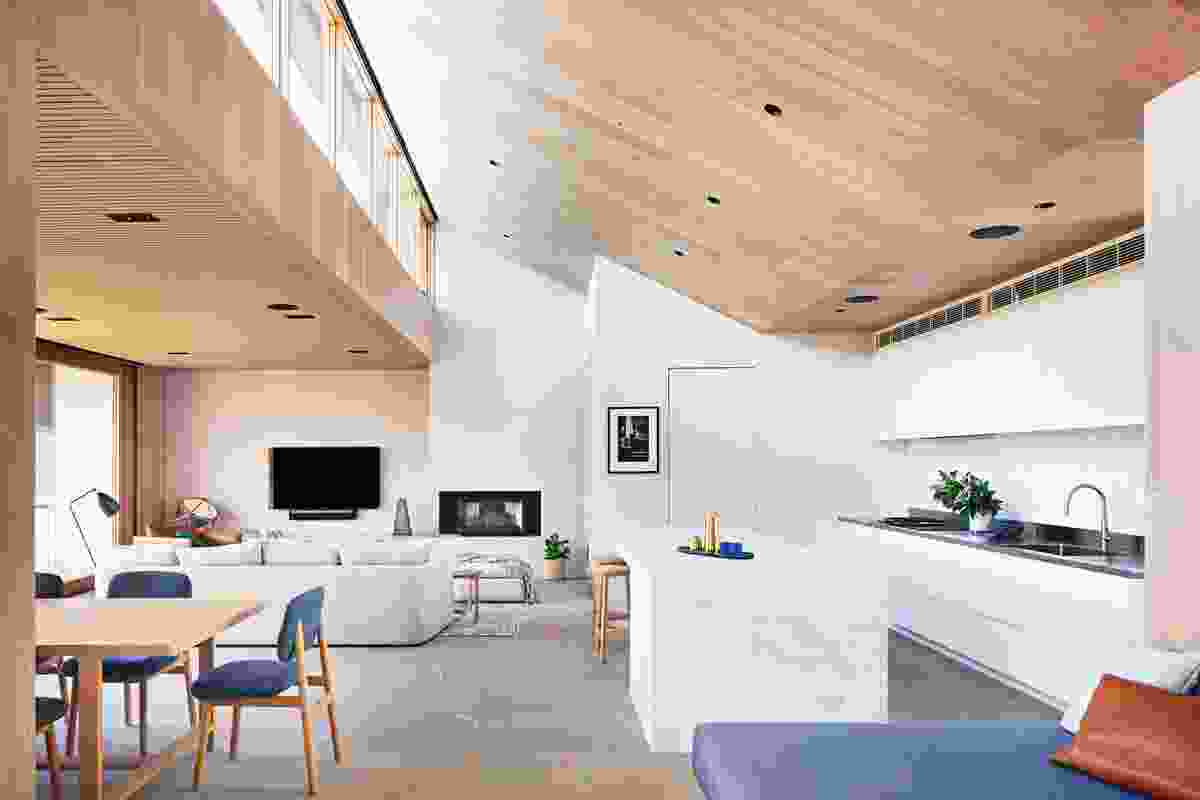 The clerestory windows, accommodated by the gable roof form, bring in “a world of light.” 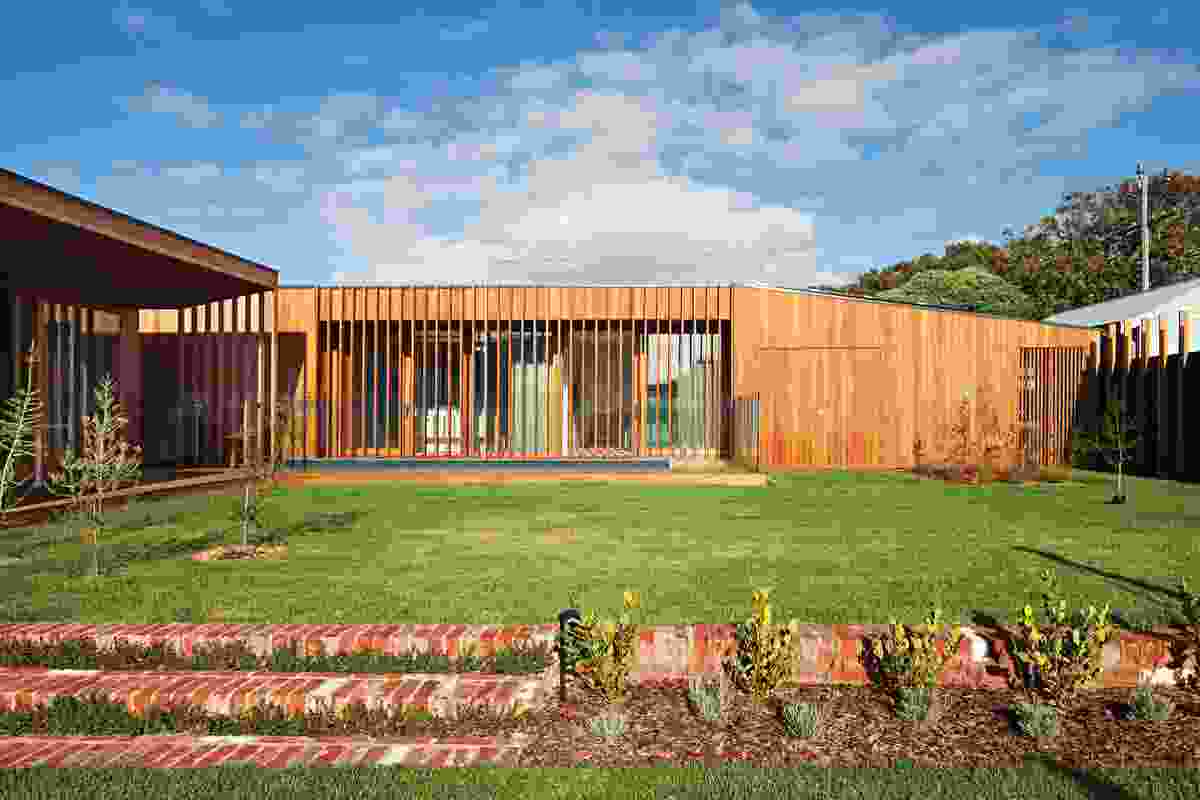 The house’s L-shaped plan forms a protective perimeter around a private lawn and garden. 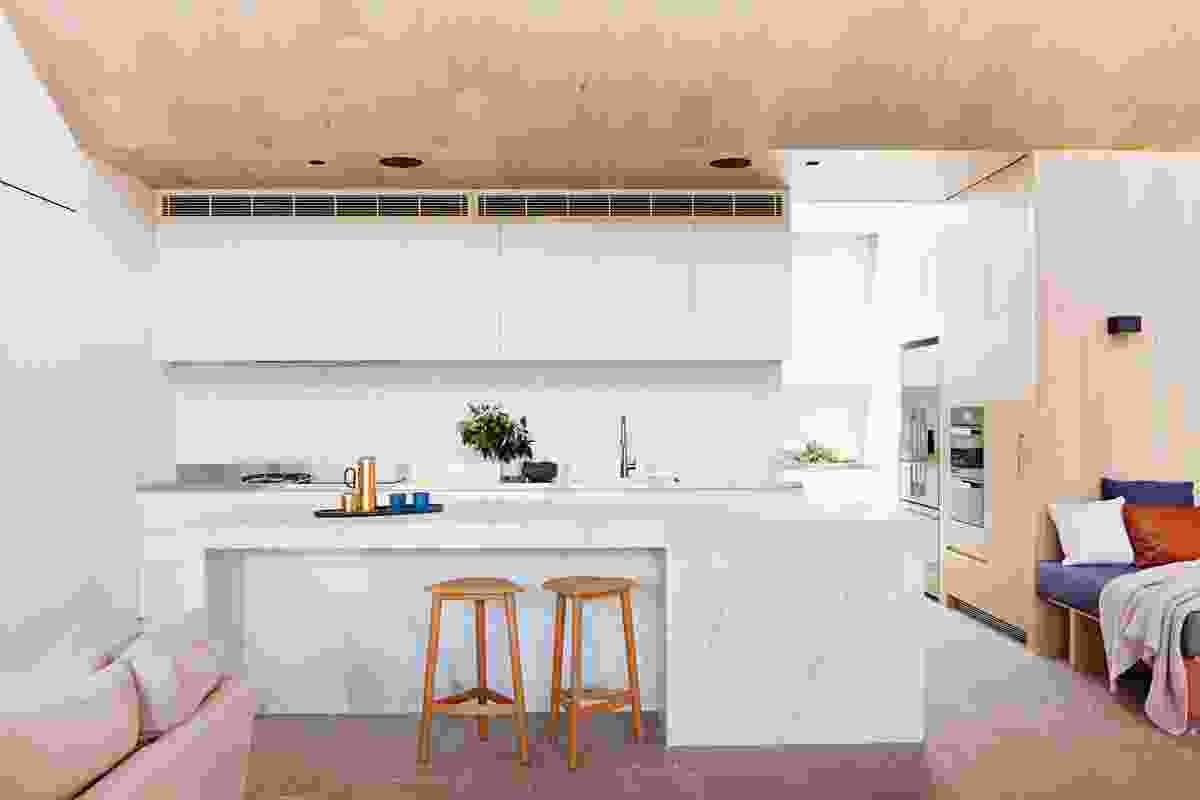 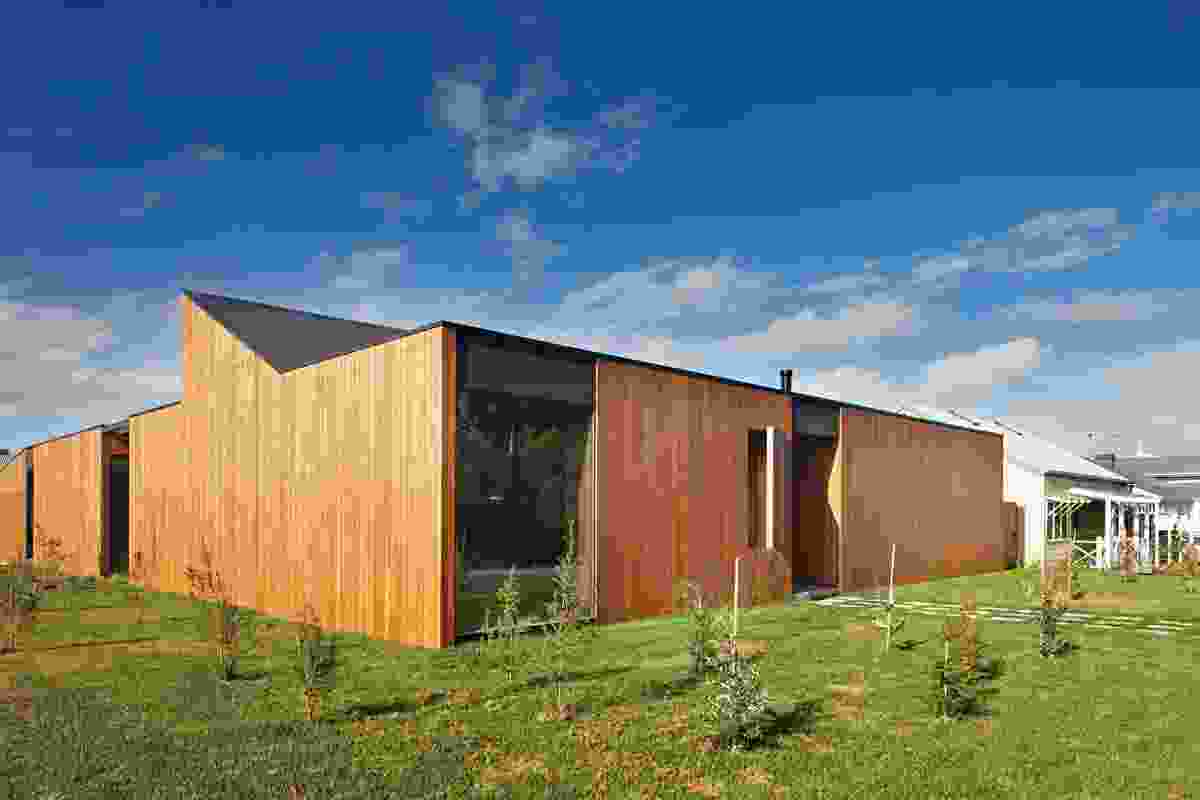 A playful triangular protrusion references the gable roofs of the surrounding houses. 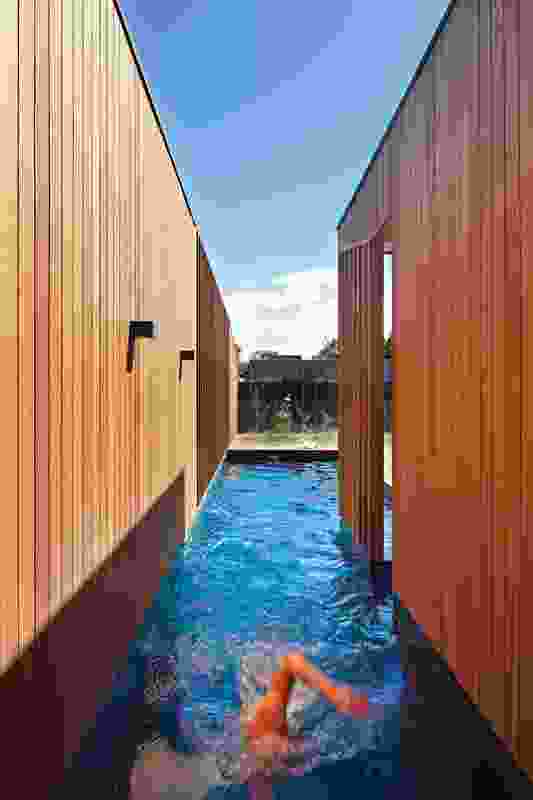 The main bedroom, separated from the garden by a covered walkway, enjoys a private edge to the lap pool. 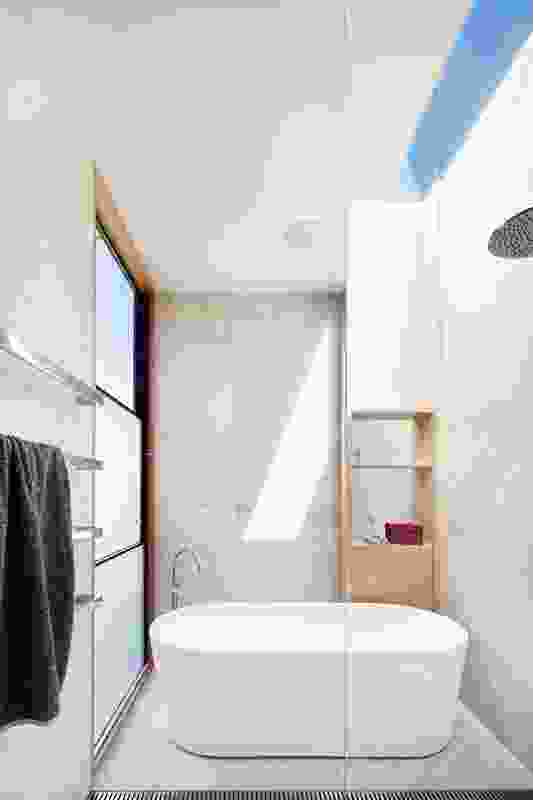 Detail is stripped away throughout, leaving seamless surfaces and restrained luxury.