Established in the 1960s as a support service for the vulnerable in Sydney’s King’s Cross, the Wayside Chapel provides unconditional care to people of all faiths, and of none. An ambitious scheme for a new home for the Wayside, designed by Environa Studio and completed in 2012, led to the salvation of this vital community organization.

The Wayside Chapel comprises two brick buildings – one new, the other refurbished – flanking a community hub. The brick structures are designed to assimilate into the surrounding neighbourhood context.

Sydney’s Kings Cross in the 1960s was an eclectic cacophony of tourism, entertainment, a red-light district and illegal casinos and drugs. When Reverend Ted Noffs established the Wayside Chapel in 1964, it provided a small but much-needed support facility for the disaffected youth who had gravitated toward the Cross and to whom society had turned a blind eye.

The Wayside, as it is affectionately known, quickly became a vital institution for the community in and around Kings Cross. Originally occupying two rooms in a low-rise apartment block at 29 Hughes Street, it quickly grew to accommodate a chapel, a coffee shop, a crisis centre, the first office for the Foundation for Aboriginal Affairs and a theatre designed by celebrated Sydney architect John James. By the 1970s Wayside had expanded into an adjacent brown-brick apartment block.

Architect Tone Wheeler’s affinity with the Wayside Chapel dates back to his self-described “unhappy” teens. “I didn’t fit in at school and I came here because this was where all the misfits were and you could be anything,” says the co-director of Environa Studio. “I had a real tender spot for it and I would keep coming here even though I didn’t really have any use for it.”

By the early 2000s, the Wayside buildings had fallen into disrepair. Reverend Graham Long, who was the church pastor from 2004 until 2018, told the ABC’s Australian Story, “I did weddings in their little chapel, standing in an inch of water when it leaked. There was a light well, which is where most pigeons in Sydney went to die. We had carpet and people had pissed in that and thrown up in that for 40 years before I got there.”1

Talk of a new building had begun in the late 1990s but there was no funding at the time. In the face of a dire financial situation, Long embarked on an ambitious campaign to raise $8.2 million for the new building, kicked off by a $250,000 donation from Malcolm and Lucy Turnbull.2

In 2010, the two original buildings at 29 Hughes Street were demolished to make way for a new two-part building that comprised a steel and concrete portion containing the chapel and a cafe, and a companion brick portion to the west housing the Aboriginal Program, which has its own, separate access. To the east, the original brown-brick apartment block was refurbished and converted into staff offices. The brick structures are designed to match the surrounding area and appear like residential buildings flanking the central community hub.

On the ground floor of the hub, the community facilities can seamlessly transition into one large space that extends to the street. This includes an elevated forecourt designed with landscape architect Sue Barnsley Design. But the internal spaces can also be easily delineated by glass sliding doors.

“The chapel itself is really an extension of the cafe and the cafe is the thing that brings people in,” explains Wheeler.

One of the smallest rooms in the building, the chapel is located to the rear of the cafe. Its shape references the Christian tradition of chapels in the round, recalling the Baroque architecture of Gian Lorenzo Bernini and Francesco Borromini. “We couldn’t do that here, the space is not big enough,” Wheeler says, “so the chapel is hexagonal.”

The Wayside is a church “for people of all faiths, and of none,” states the organization’s website. Christian symbolism in the building is minimal and recedes into the background. A cross can be detected in the cork floor as well as in the ceiling, although in the latter, its main purpose is to carry and conceal technology.

The chapel is lined with acoustic foam with fabric stretched over it, which protects the space from the noise of Kings Cross outside. Phrases from the Bible and the Koran are inscribed as graffiti onto the fabric. The room can be closed off from the cafe to allow the pastor to conduct more private conversations with visitors; a makeshift confessional.

“They’ll tell the truth in here but they won’t over there,” Wheeler explains, pointing to the cafe.

“Graham reckons it’s something to do with the architecture. I think it’s just the naming of it. People aren’t allowed into this space unless by invitation. It has a sacredness to it, and yet it’s really just a continuation of the space through the glass doors. On Sunday mornings, there is a service in here and the whole of the cafe is cleared.”

Upstairs, a community hall hosts events that range from mothers groups to art exhibitions, book launches, movie nights and even “Wayside’s Got Talent.” The hall is lined in unpainted, sustainably grown plywood, designed to be as non-toxic as possible. The building is naturally ventilated, although it has an airconditioning system that is used in extreme weather conditions. “The energy bill for this building is half of what it was before and it’s twice the size,” Wheeler says. The building’s sustainability credentials earned it a National Award for Sustainable Architecture in 2014.

The colours in the building are deliberately bright and non-institutional. Wheeler originally proposed a palette of calming greens and blues, but this was one of the only things Reverend Long rejected outright. “Blue is the colour you see in hospitals, green is what you see in prison,” Wheeler recalls Long saying. “He said ‘I want bright colours.’ That’s why it’s pink and bright yellow and orange.”

The productive rooftop garden is the crowning feature of the building, and was one of the first green roof projects in the City of Sydney. “For the people of Wayside – people who aren’t really sociable or who are not confident in themselves – it’s quite easy to get them to start watering plants and take an interest in it. And then they take over.”

The garden’s produce is used in the onsite cafe and sold to a nearby restaurant. Indira Naidoo, Wayside ambassador and author of The Edible Balcony , also runs workshops in the rooftop garden. It has become a source of income for the organization, as has the op shop on the ground floor, which yields around $500,000 a year.

Many parts of the building have changed use since it was completed. The Wayside’s staff numbers have grown from three to thirty, requiring more office space. The pastor’s office is now a commercial kitchen, often used as a life skills education facility for visitors.

“I’m fascinated by the usage of the building because the way the building is designed, the uses were not here in the original design,” Wheeler says. “The value of something is remembered long after the cost is gone. And it’s no longer the Wayside chapel as a chapel that assists the homeless community; it’s become a community centre for Kings Cross.” 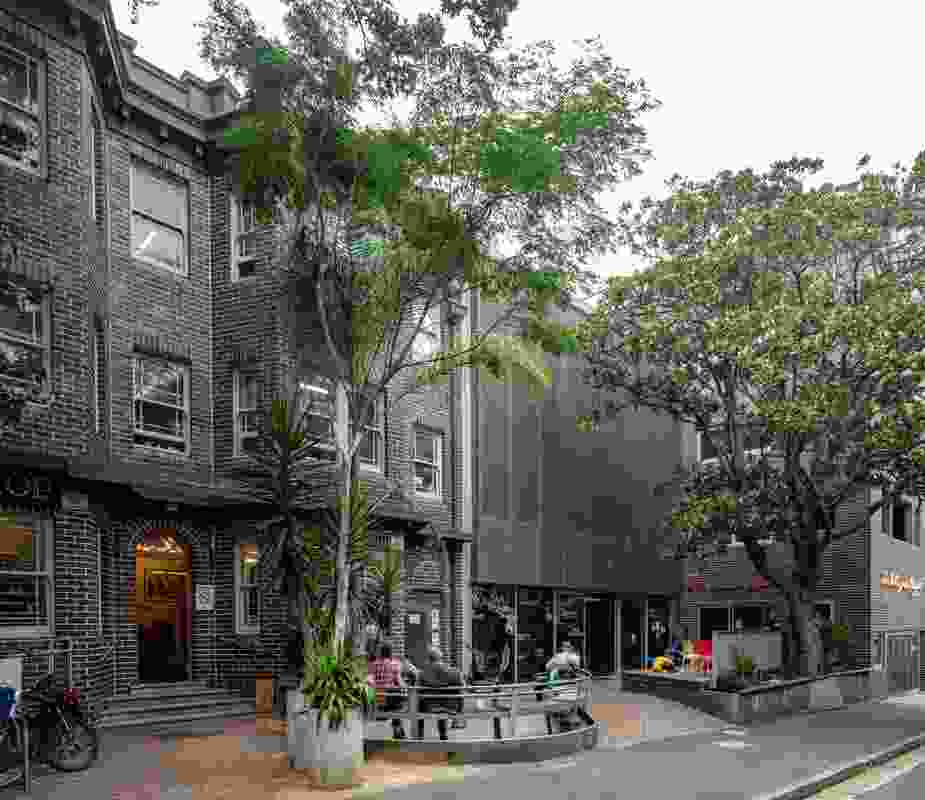 The Wayside Chapel comprises two brick buildings – one new, the other refurbished – flanking a community hub. The brick structures are designed to assimilate into the surrounding neighbourhood context. 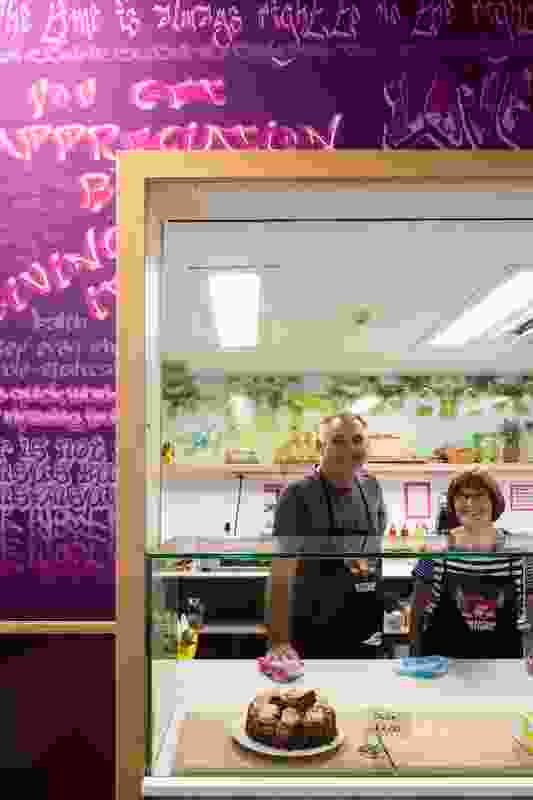 The Wayside’s cafe draws people in from the elevated forecourt at the front of the building. 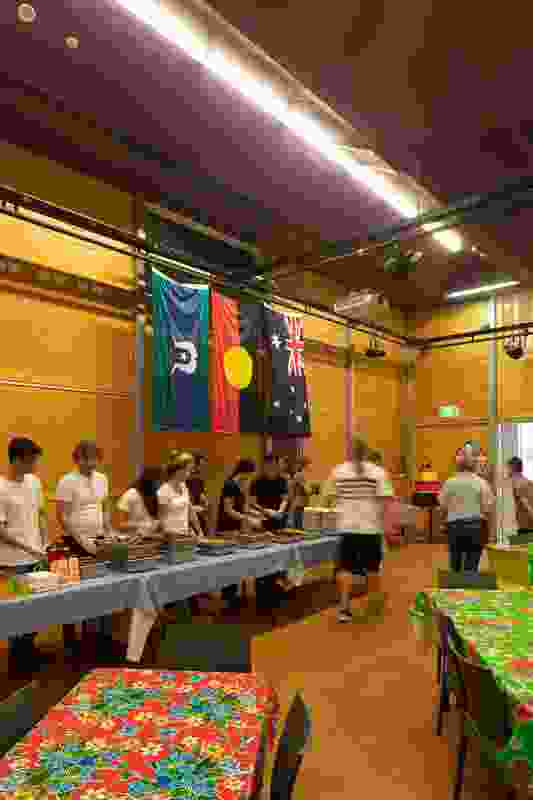 A long-life, loose-fit philosophy allows the building to easily accommodate varied use. 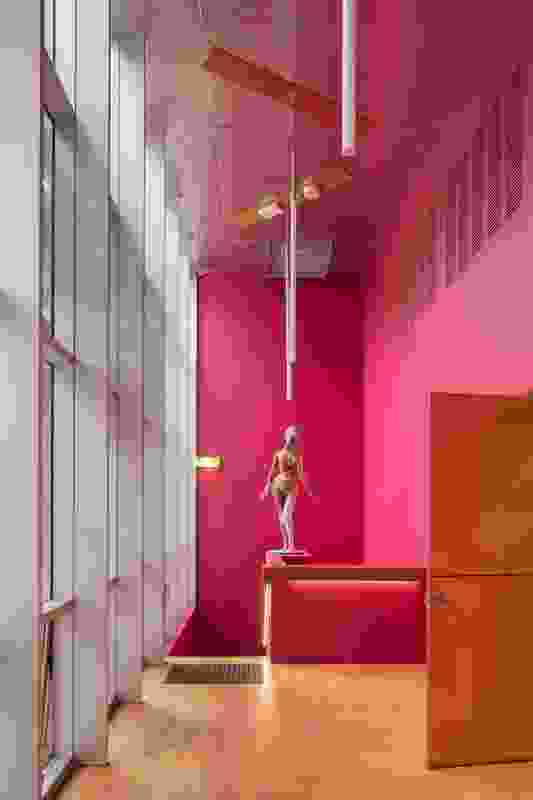 A hall upstairs in the community hub provides a flexible events space. Colours in the building are bright and deliberately non-institutional. 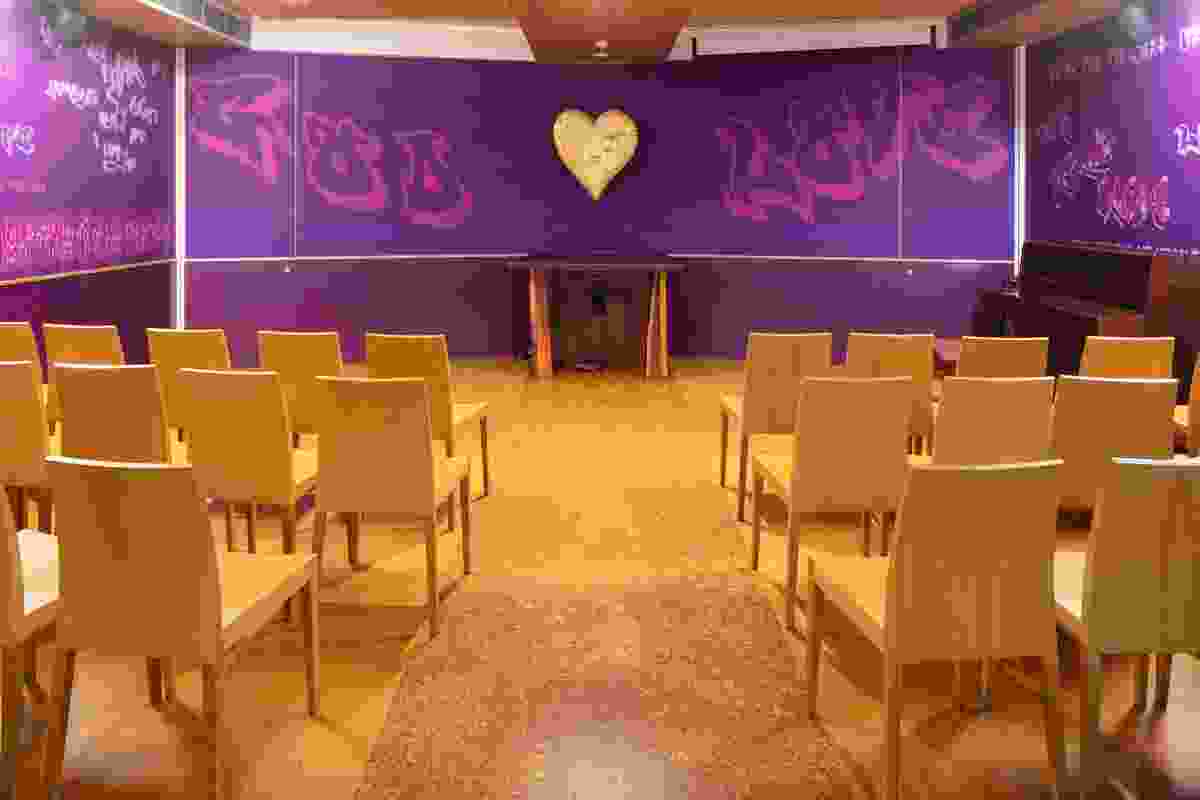 A small chapel on the ground floor, behind the cafe, provides a non- denominational sanctuary for an organization with the motto “love over hate.” 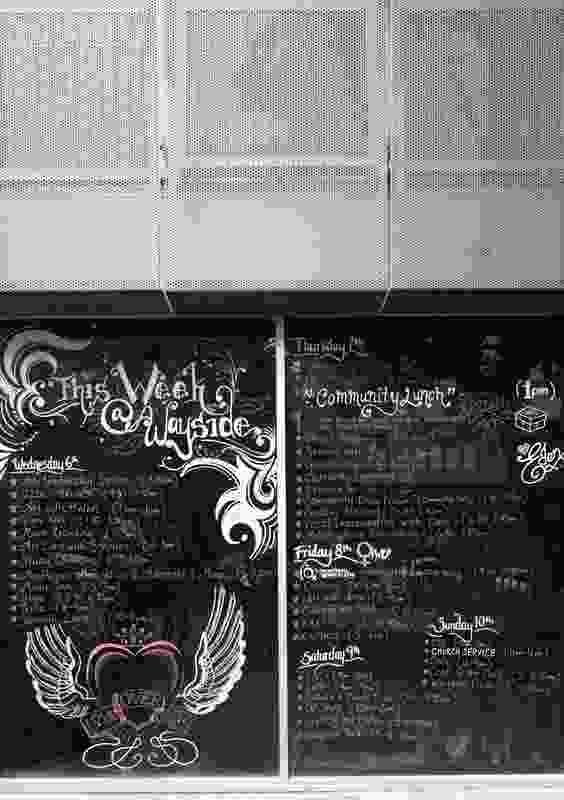 Initially established in the 1960s to provide a safe haven for disaffected youth, The Wayside Chapel has grown to become a thriving community organization. 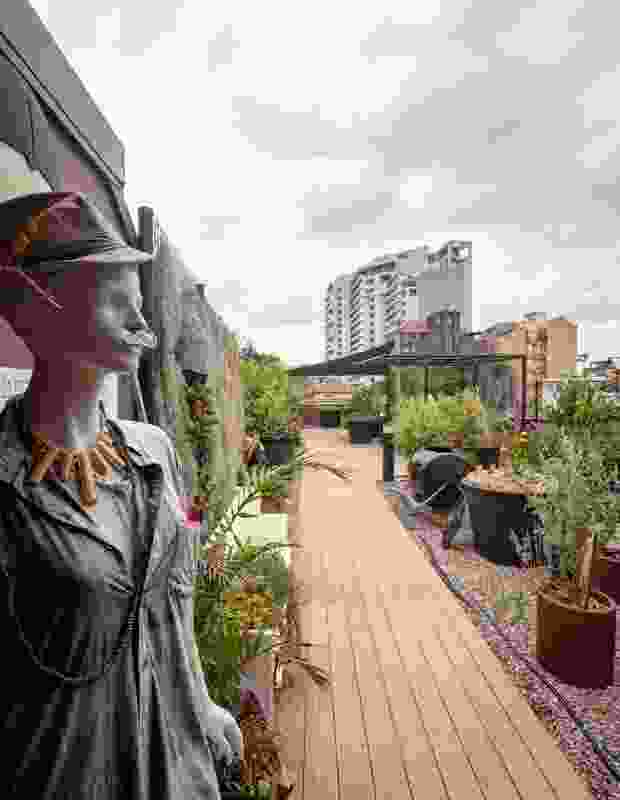 Produce grown in the rooftop garden is used in the Wayside cafe and sold to neighbouring restaurants.