In her winning essay for SONA’s SAC Sustainability Essay Competition, Gillian Hatch proposes that swimming pool aquaculture might yield a sustainable solution for the suburbs.

Swimming pool aquaculture might yield a sustainable solution for the suburbs.

At first glance, the Geelong suburb of Newtown (approximate population 9,800) does not appear disadvantaged, a suburb for the middle classes with an average annual taxable income of $46,584 per person (compared to $37,055 for the neighbouring suburb of Geelong West).1 Centrally located within the Greater City of Geelong, it is close to schools and shopping areas and has several supermarkets within its boundaries. It could be argued, therefore, that Newtown is close to food resources. However, it is not close to areas of food production and, as the populations of both Melbourne and Geelong and the areas that surround them continue to grow, this distance increases. Population growth and expansion have eaten into the food production areas that surround Geelong – particularly Werribee and the Surf Coast.

This growing distance suggests a need to find other food resources, and looking at a map of Geelong, another potential food source becomes apparent – the sea, namely Corio Bay. This view suggests that fisheries could play a significant part in the food supply for Newtown residents. However, as James David Smith notes, Geelong’s role as an industrial hub and as the largest port in regional Victoria has had significant environmental effects, which limit the feasibility and safety of using this area as a major food source.2 Despite this, the idea of using a body of water for local food production forms the beginning of my proposal.

A Google Maps aerial view reveals that at least a quarter of the backyards in Newtown’s Skene Street contain swimming pools. Zooming out, it becomes apparent that this phenomenon applies across Newtown. But an ageing population (15.6 percent of its residents were aged over sixty-five, compared with 13 percent Australia-wide in 2007) has meant that swimming pool use decreases as children move out and maintenance costs increase.3 So, how might disused and under-used pools in Newtown be used to decrease distance from food production zones? Put simply, I propose utilizing these spaces as urban-scale agricultural zones for residents to reduce pressure on existing agricultural areas and reduce the need to relocate resources to serve this urban environment.

Backyard pools that are no longer in use provide three conditions – sunlight, water and constant water circulation – that create an optimal environment for aquaculture, the cultivation of aquatic life in controlled settings. Essentially this proposal involves the community farming fish on a small scale, a technique that is thought to have been in use for thousands of years, with evidence suggesting that Victoria’s Gunditjmara people raised eels as early as 6000 BC.4

Fish selection is important. Tilapia, the common name for species from the tilapiine cichlid tribe, is a popular fish for small-scale farming, especially in developing nations, because of its large size, rapid growth and palatability and the ease with which it can be farmed.5 Its herbivore diet mainly consists of plankton, filamentous algae, aquatic macrophytes and other vegetable matter. This diet allows fish to be fed simply by maintaining their environment and it also means that the fish don’t accumulate toxins in their bodies as carnivorous fish species do. This species is also appropriate for Geelong’s climatic conditions.

Once the site has been prepared, the pool can be stocked with young tilapia, allowing for two to three mature fish per square metre of water surface. The fish require consistent algae production in the pool to survive. The addition of fertilizer to the pool can be used to achieve this but, for production to be sustainable, it is essential that another process is found. A suitable option is integrated multi-trophic aquaculture (IMTA), a process in which the waste produced from one species is recycled to become food for another.6

Community contribution would be particularly important when the tilapia reach maturity at ten months. Harvesting would require participants to fish the tilapia from the pool using a net, to process and distribute the fish and to restock the pond. I would hope that this work would act as a model of community engagement for other groups in a similar way to CERES, a community environment park in Brunswick.7 This scheme could be used to increase knowledge and interest in sustainability within the community and encourage other forms of urban agriculture.

The proposal also provides new employment opportunities to people within Geelong – the city suffers high unemployment, especially among the young (8.6 percent compared to Australia’s average of 5.1 percent).8 Employment opportunities would include the installation and maintenance of these systems as well as the harvesting of the fish; and skills training could be offered by the nearby Gordon Institute of TAFE. On a community scale, implementing this system would reduce the need to transport food over great distances, decreasing the environmental effects of travel and storage and reducing pressure on the dwindling supply of wild fish stocks.

Think about this number in fish … 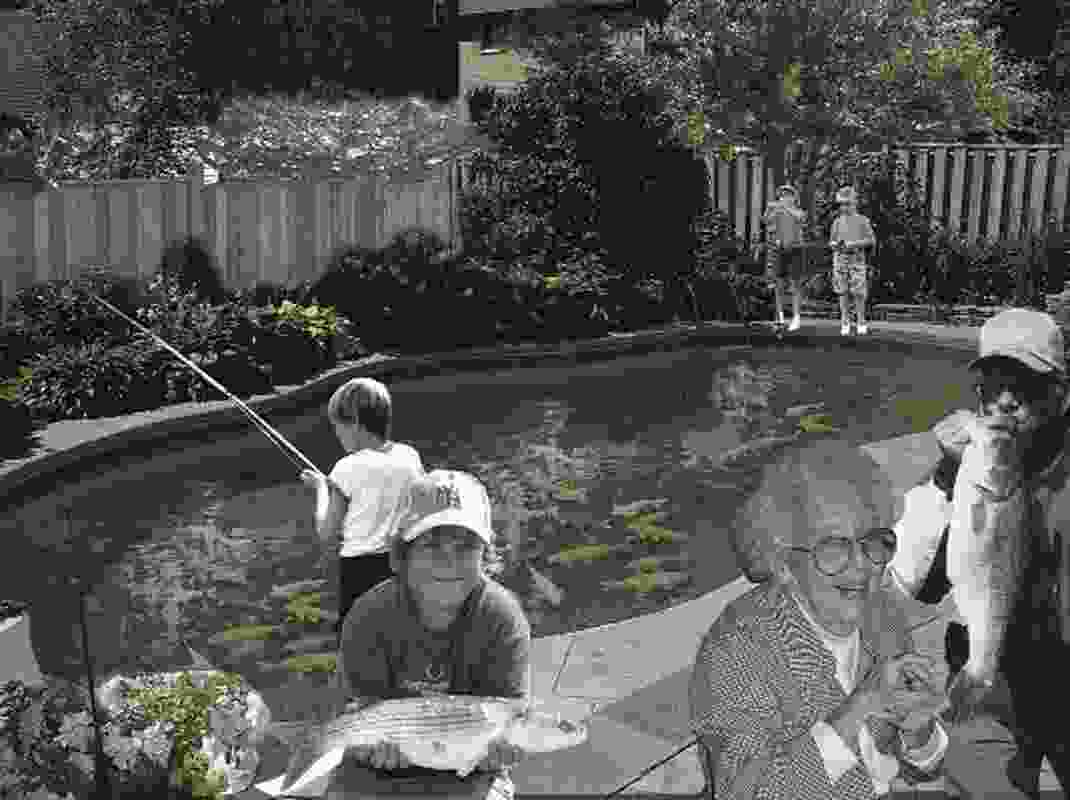 Swimming pool aquaculture might yield a sustainable solution for the suburbs.