Tony Hobba Architects crafts a sculptural envelope around a kiosk to create a striking form in the coastal landscape. This review from Architecture Australia Jan/Feb 2013.

The design of Third Wave Kiosk meets recreation and tourist requirements while respecting the coastal environment.

Like a fragment washed up from a distant building site and embedded long ago in the sand, or some ancient infrastructure exposed by the slow erosion of the dunes, this small kiosk on the Torquay foreshore appears to have been there forever. With its rusty finish, the kiosk reflects the weathering of the sea environment and echoes the red cliffs in the distance. It also captures an important element of Torquay – its identity as a place of design and invention. The Australian surfing industry still has its home here and is supported by a subculture of reverence for the sea and the natural environment, technical innovation, experimentation, practical adaptation and new ideas.

The kiosk’s architect, Tony Hobba of Tony Hobba Architects, who lives and practises in the area, explains that high-level research and development underpin this culture of entrepreneurship, which has raised Torquay’s profile as a town and helped the industry grow to international proportions. According to Hobba, what is not as strong is investment in the design of the built environment. Coastal building development can be run-of-the-mill design, undermined by unsustainable construction techniques and by insensitivity to scale, climate and locality. The reasons for this are not isolated to the coast, but in many coastal towns there is a strong connection with place and locals act voluntarily as custodians. There is also an affinity with a time when economic circumstances and cultural aspirations created simpler designs that seemed to reflect more closely a sustainable relationship to a unique place.

Faced with tight space and budget constraints, the architects proposed recycled sheet piles, often used as formwork for seawalls, to create a sculptural envelope around a standard concrete block building that can be glimpsed only through the screen wall at the back of the site. The sheets double as retaining walls against the sand dunes on which the kiosk sits. These particular sheet piles were originally used during the 2010 floods in Victoria as temporary formwork for sandbanking overflowing rivers. Their use allowed the project to be built within its budget.

The development is on Crown land, which required negotiation with a range of government authorities and the building of mutual trust. The Victorian Coastal Council is the peak body for planning and management of the Victorian coast and an advisory body to the Minister for the Environment and Climate Change.

Victoria retains 96 percent of its coastline as public land and the Department of Sustainability and Environment (DSE) is the approval authority, with the Surf Coast Shire responsible for planning.The Great Ocean Road Coast Committee manages the thirty-seven kilometres of coastal Crown land reserves along the Great Ocean Road, from Point Impossible east of Torquay to Cumberland River south-west of Lorne, and was responsible for the masterplan of this foreshore and managing the funding of the project.

The DSE was concerned that using steel, as opposed to timber, was too risky aesthetically. But the walls had to be robust and the architects won the department over by making a proposal in line with government support of the use of recycled materials, gaining approval on policy grounds. The authorities overcame initial nerves and are now fully behind the project.

The kiosk is highly visible, including from the sea, and has become a meeting point for walkers, surf schools and the nearby camp site. In my view it is a positive addition to the landscape, although this is based on a position that accepts the masterplan. The argument for challenging the masterplan and not building any developments within dune and other dynamic coastal systems is a compelling one and comes from thinking at a higher strategic level about the value of this landscape, our relationship to it, and why and how we impact on it.

There is certainly motivation to challenge development on the foreshore within the local community and ongoing conversations and discussion may influence future stages. A positive aspect about the development in this location is that it makes use of the existing car park and seems to focus activity on the foreshore without in any way overstating its presence or treading too heavily on its site. It could have done with a little more capital investment to incorporate some sustainable initiatives, such as solar power.

In the face of challenges such as population growth, the standardization of commercial and residential developments along the coast, and the threat of linear residential and holiday home development erasing the spaces and differences between coastal towns, any contribution to reinforcing a separate town identity is important. This building does that by celebrating a spirit of invention, opportunity and making do with little means. 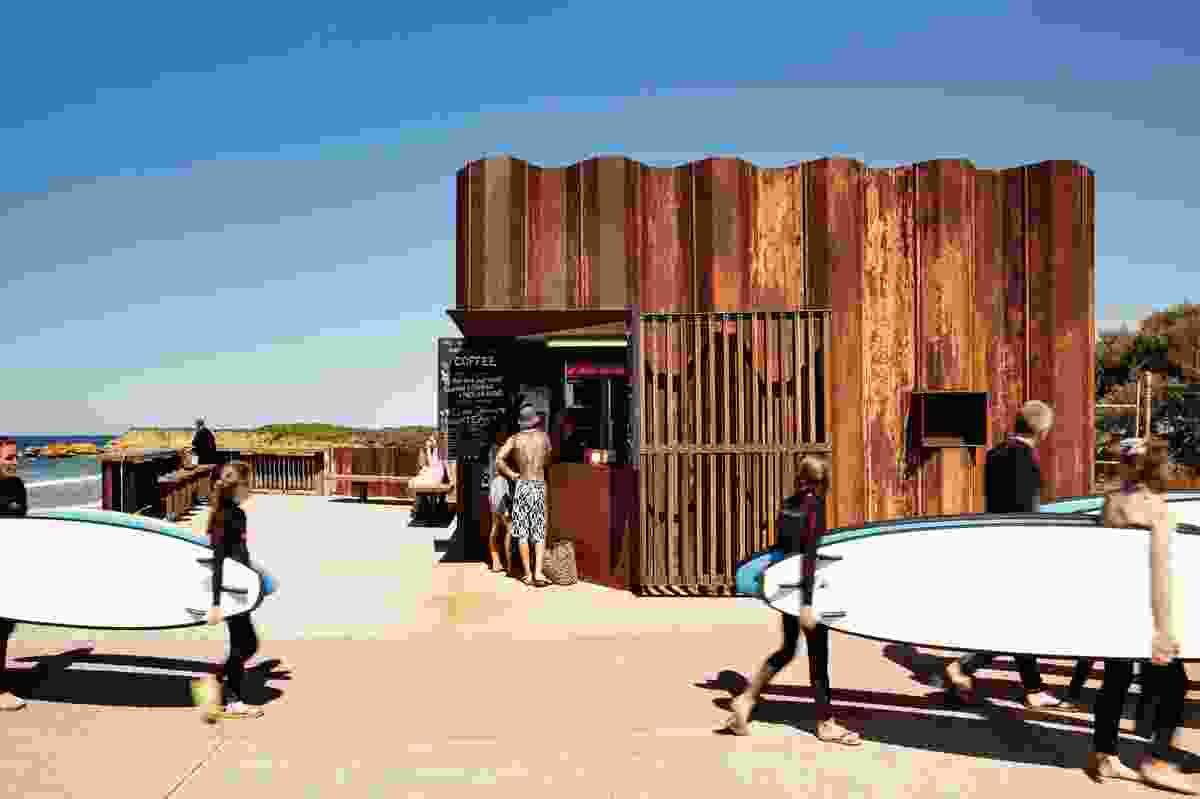 The design of Third Wave Kiosk meets recreation and tourist requirements while respecting the coastal environment. 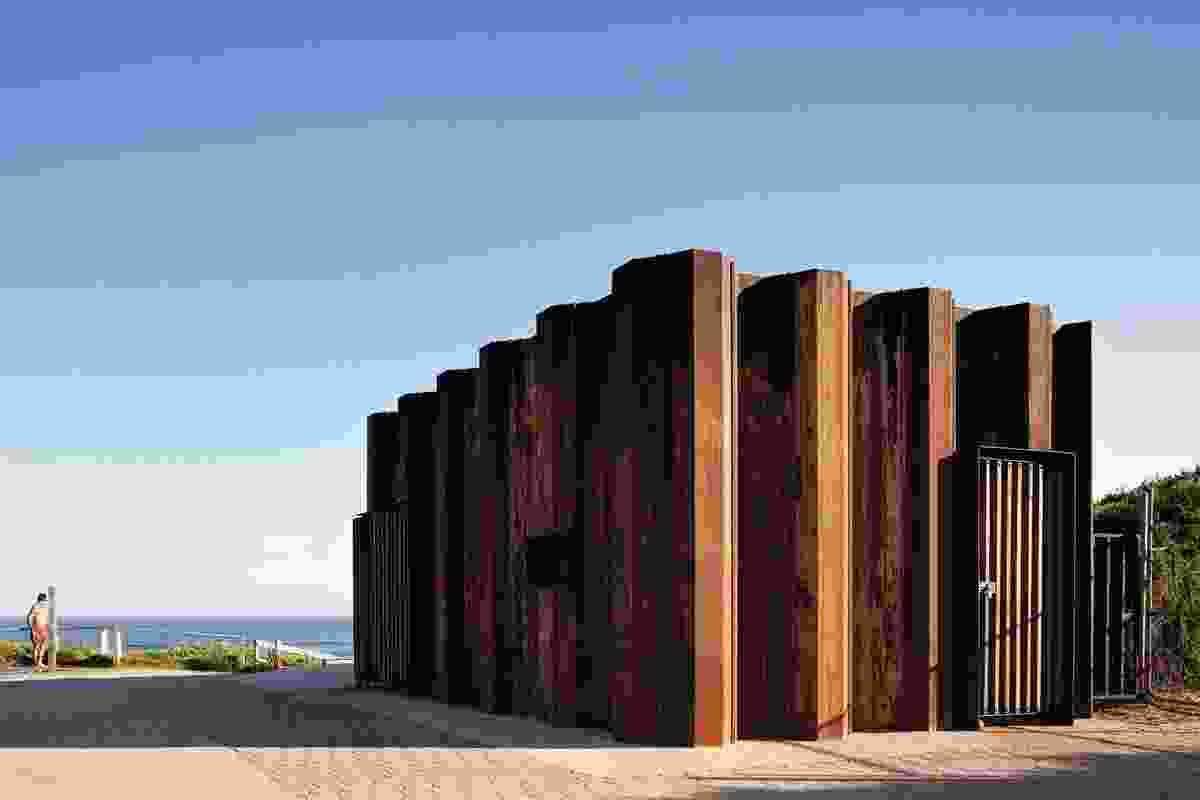 The exterior of the robust form, in Cor-Ten steel, has weathered beautifully, further enhancing its connection with the landscape. 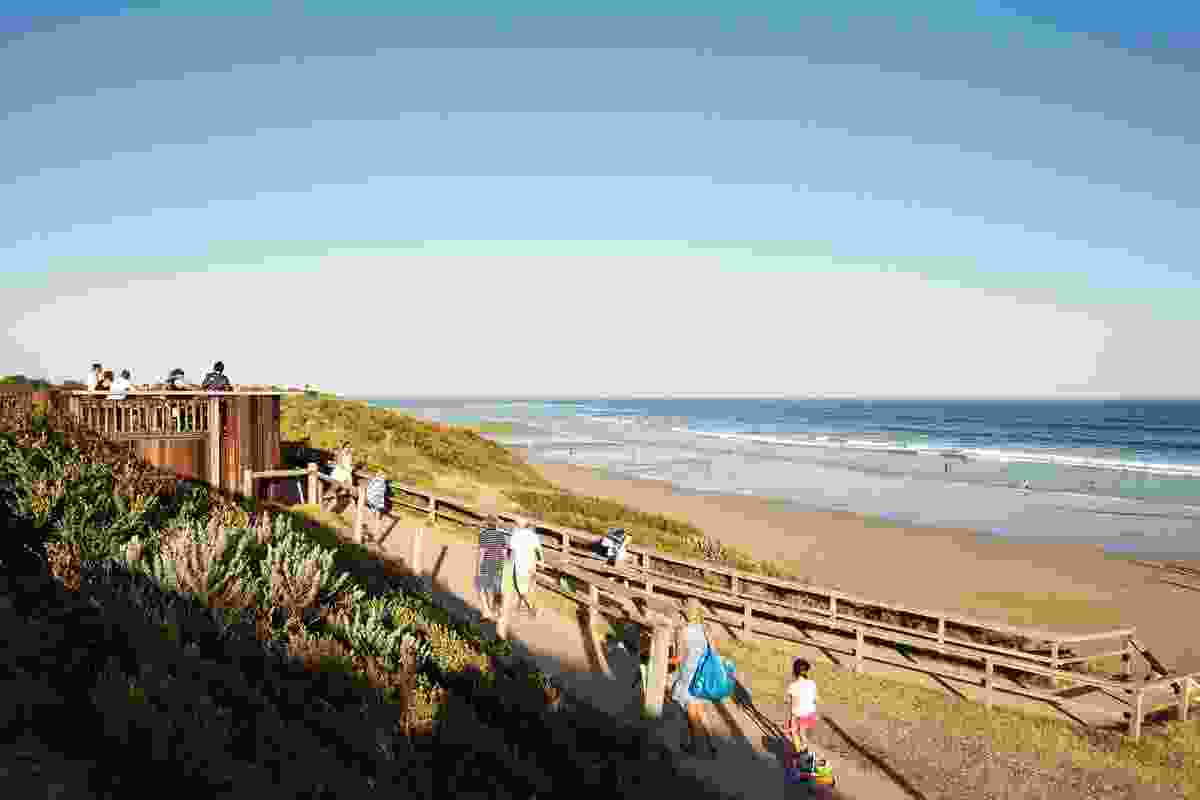 The wave-like design of the kiosk, while blending visually with the landscape, is highly visible even from the beach. 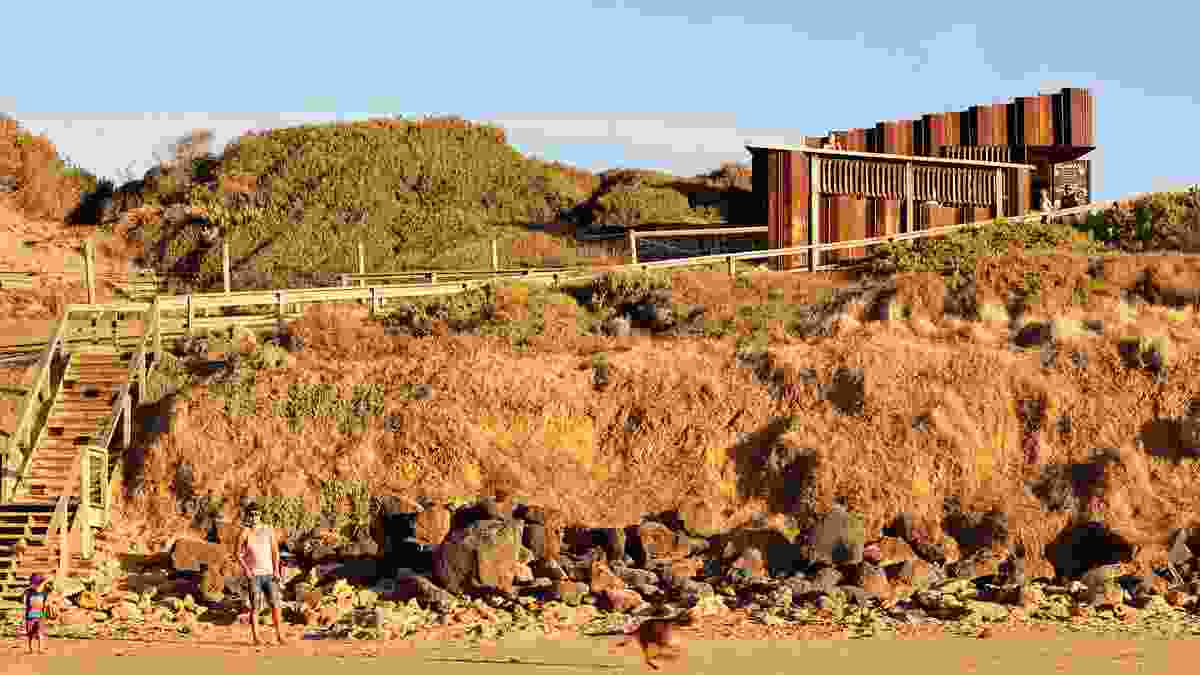 The building is a meeting point for walkers and local surf schools, and provides a connection to the beach without overstating its presence on the site.