Panovscott’s reworking of this Sydney terrace has been influenced by the owners’ time in Japan, and resulted in a series of generous and engaging spaces.

A robust palette, thoughtfully detailed, has made the compact spaces feel comfortable and generous.

Atelier Bow-Wow founding partner Yoshiharu Tsukamoto believes architecture can create better relationships between people. It is a solid tenet for anyone approaching a new building project, and of course there are myriad ways in which an architect can set about achieving this goal – one of which is demonstrated in the design of Three by Two House.

After living in Japan for a number of years, the clients returned to Sydney and purchased a single-storey semi in Sydney’s Inner West. Their time overseas had understandably influenced their idea of how they might live when they returned home. They commissioned architects Anita Panov and Andrew Scott, of practice Panovscott Architects, to interpret their ideas, expand upon them and explore how they might be adapted to their new home.

In approaching the commission, Panovscott Architects looked for ways to unlock the brief and ground it in the context they were working within. In breaking the project down they began to see it, in broad terms, as being about the making of a new whole through the retention of one half of a structure and the reconfiguration of the other. While the existing relationship between the house and the street was to remain, the opposite end of the house had no such constraints. The architects sought to deliberately eschew any contextual pattern that might have generated a design response. Instead, they set about exploring a formal elevational response based on the idea of a grid of six two-by-two-metre squares. This allowed them to come up with a design that was not just an external expression of the interior but also a deliberate response to the garden.

The chequerboard arrangement of the garden facade acts like a collecting plate that records both the silhouettes and the reflections of the surrounding trees. This first layer of light is captured by the alternating material squares of Western red cedar solids and glazed panels. Through the garden facade the arrangement of the house can be seen. The internal workings of the house are set back from the facade, within what the architects call the Great Room. The nature of the Great Room evolved in response to the clients’ considered brief. As with many projects, size and budget were an issue. Therefore the traditional dedicated lounge space was eschewed, the architects instead employing a strategy of “occupying the edges.” Window alcoves, a concrete element that is part stair, part plinth to perch on, and sill-height storage boxes all act as catalysts for people to engage with the garden and each other. It is all brought about with delightful ease: using a restrained, robust palette of pine, ply, plasterboard and concrete, the thoughtful detailing of these elements, along with the kitchen, makes the space feel generous and comfortable, belying the small floor plate of the room.

How you experience the Great Room begins with a carefully calibrated approach through the existing sections of the house. As you move from the front door to the end of the existing hallway space, your eye is caught by light washing down a splayed plywood panel. Splayed walls are often found at the end of terrace hallways, holding the hearth of a coal brazier and mantle and signifying your arrival at the main living space. Here, though, it hosts a shard of light from a twisting lightwell above. Beyond the splay sit the guts of the kitchen. And in the kitchen the stairs to the private main bedroom space are also hidden.

The main bedroom sits almost like a loft above the Great Room. It is set back from the rear facade to enable the double-height space of the Great Room below. From here the view of the trees is delightful, seen through the lens of the rear garden facade. Setting the edge of the bedroom back from the facade also allows the space to remain quite private – even with the big pane of glass that allows the view across to the trees.

It was about fifteen minutes into my visit when I realized that I wasn’t being shown through the house; I was being shown around it. Often with a terrace renovation it can become a procession of one room stacked behind another, and then sometimes some more rooms stacked on top. Here, I was being shifted and turned by subtle architectural variations, which made the spaces feel generous and engaging.

Andrew and Anita describe the project as one imbued with “trust, curiosity and sophistication.” The house, generated from a formal architectural response, has become a “collective offering that is soft and lean; a wonderful place to live.”

If better relationships between people can really be facilitated through architecture, then this house has the potential to do just that. 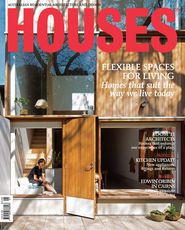 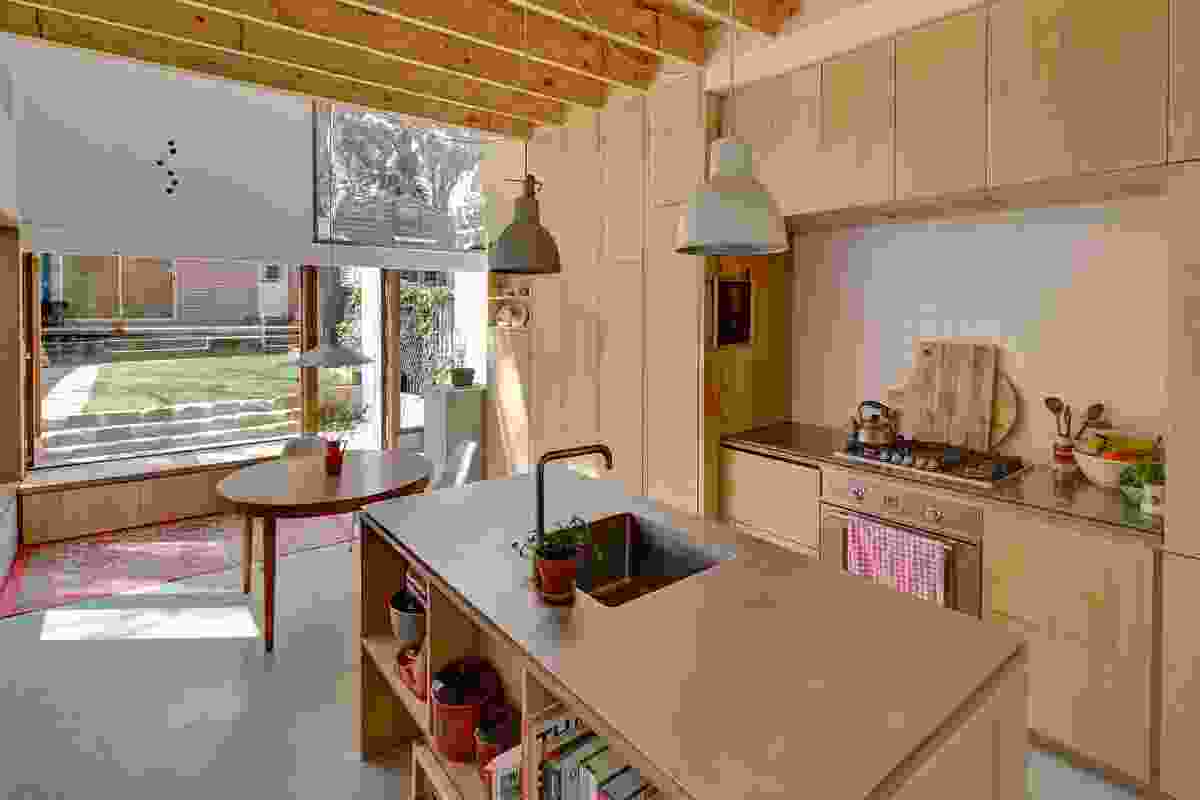 A robust palette, thoughtfully detailed, has made the compact spaces feel comfortable and generous. 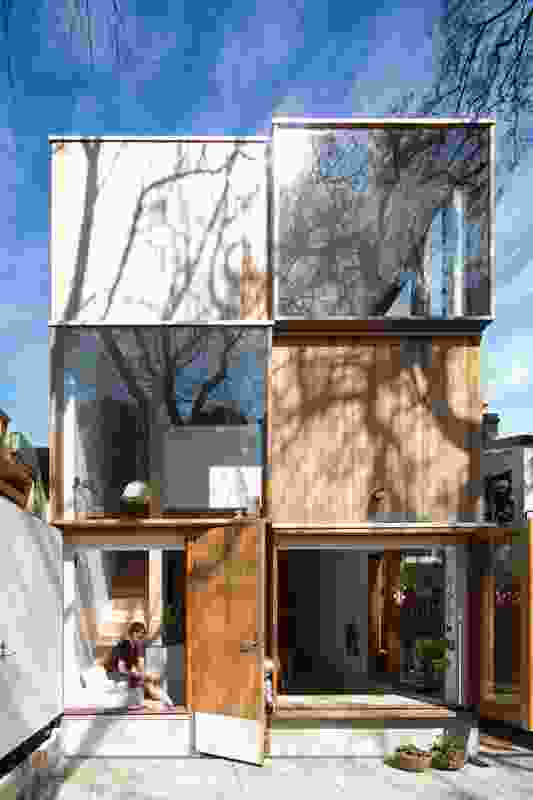 The chequerboard facade “records” the silhouettes and reflections of trees. 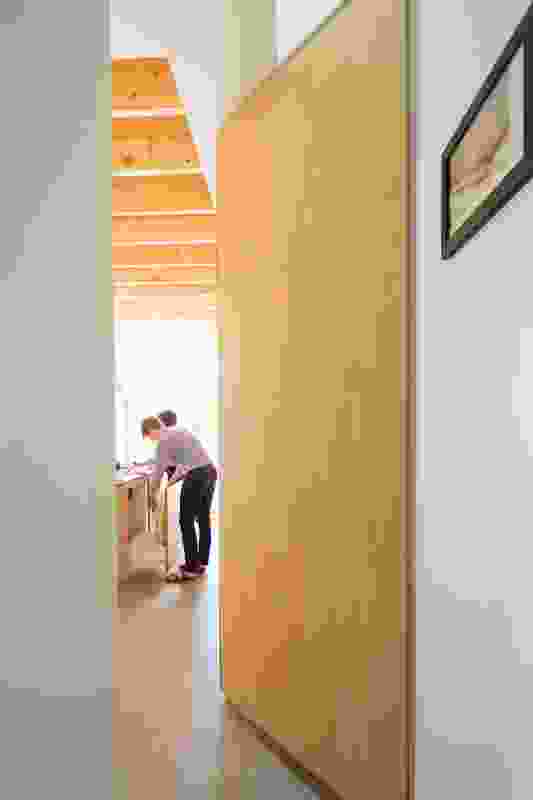 Beyond the splayed plywood panel at the end of the existing hallway, is the kitchen. 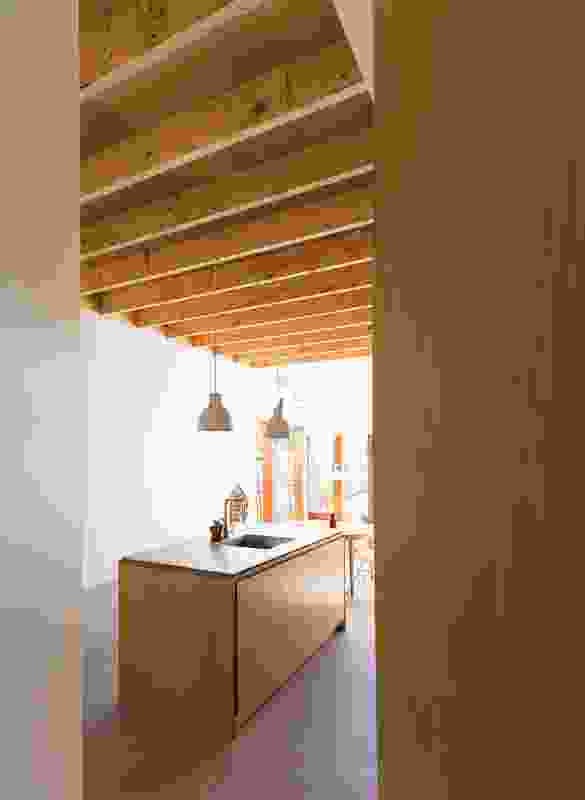 Exposed beams appear throughout, revealing either the ceiling or wall structures. 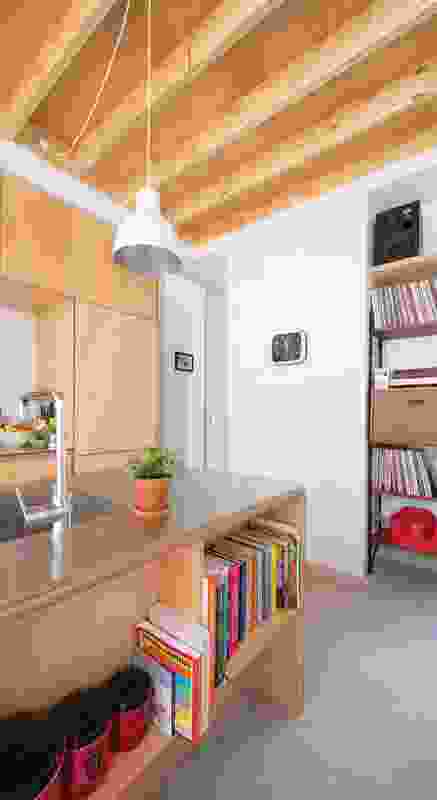 The kitchen island bench doubles as both storage and display. 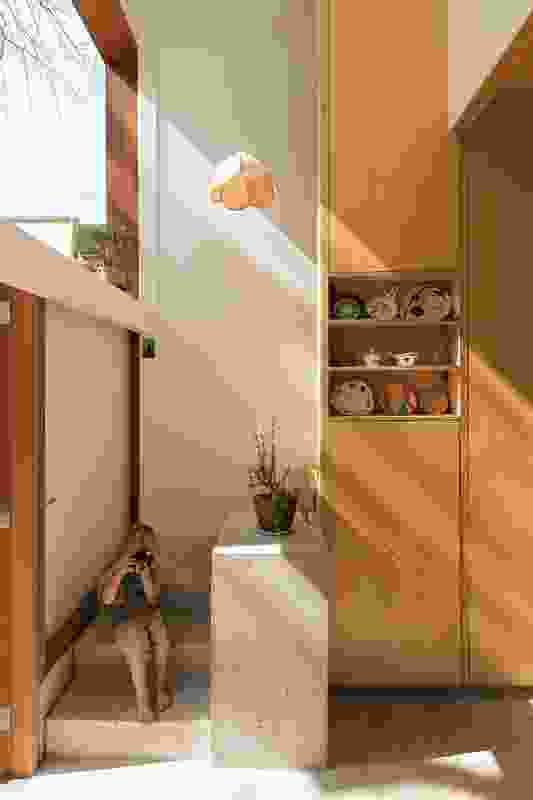 A concrete stair and plinth give the small staircase a grand entrance. 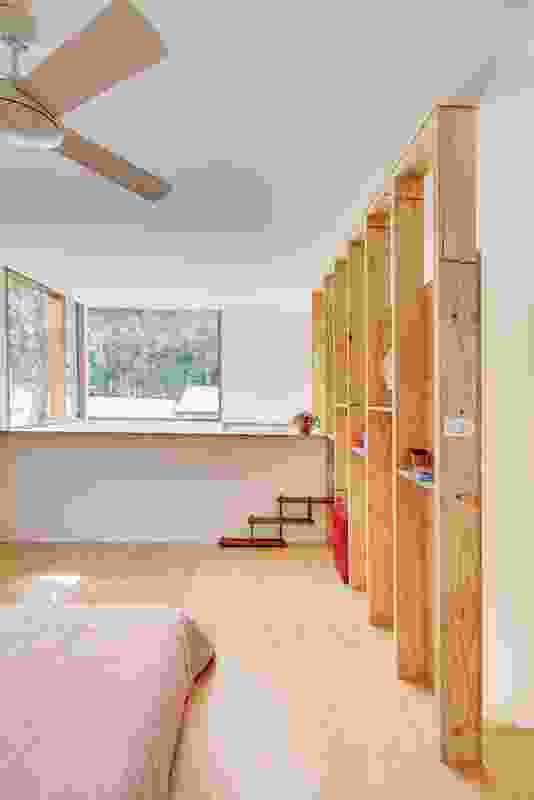 The main bedroom peels away from the facade to afford the living room a double volume. 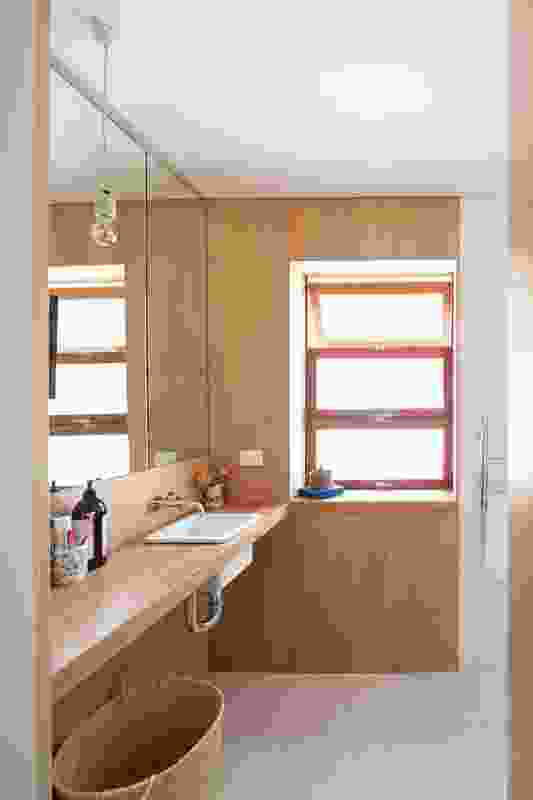 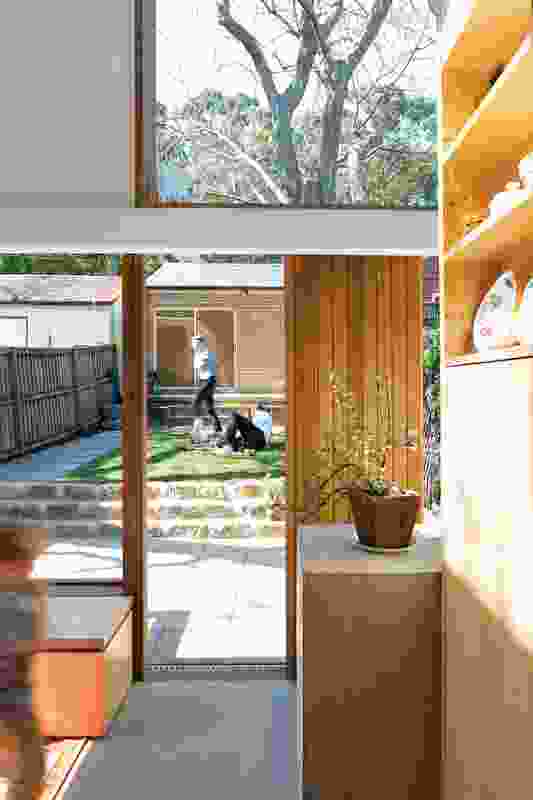 Window alcoves and window boxes encourage the occupants to “occupy the edges”. 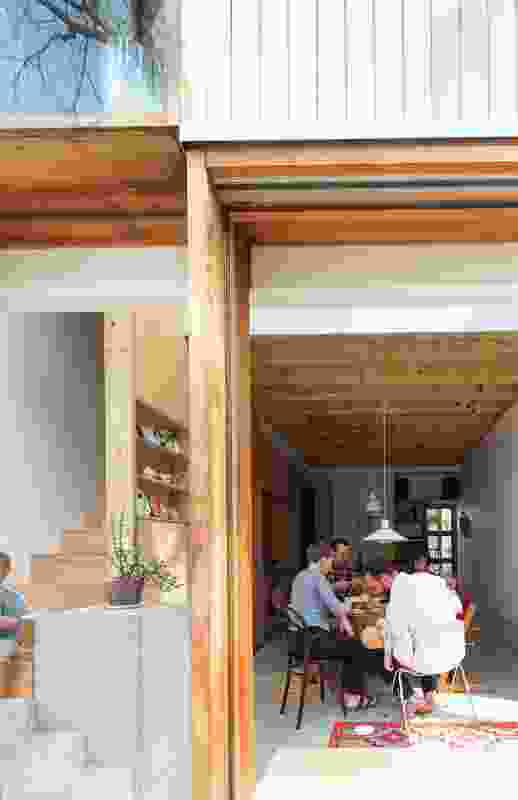 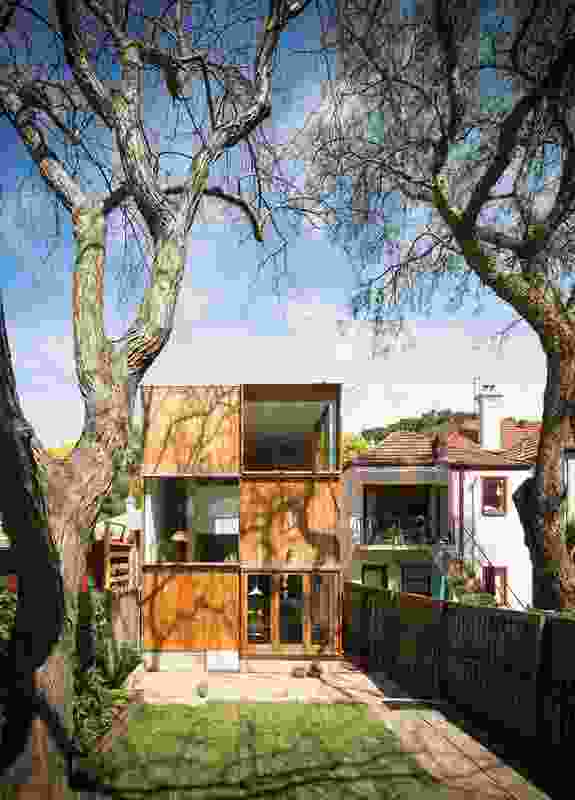 The facade is rendered as six two-by-two-metre cubes, and the exterior expresses the interior configuration.