At once fluid and contained, this family home embraces the opportunities for connection and retreat offered by its sloping, bush-bound site near the Gold Coast’s Currumbin Creek.

The primary living space in Tierney Drive House is bush-bound, locating its inhabitants in a kind of pre-suburban site condition.

The first thing to note about this fine house by architecture practice ME is the subtlety with which it occupies its address in Currumbin Waters on the Gold Coast. Facing the street is a series of low walls: timber giving way to carefully punctuated fields of concrete block. The trees at the back of the site loom over a low roof profile that belies the generous scale of the dwelling below it. In a city famous for its gauche towers and bloated houses, the moves made in the design of ME’s Tierney Drive House to secure privacy and foster spaces of provisional enclosure stand out. To be fair, this is not a beach house, nor does it boast a canal-side mooring. At some remove from the action, so to speak, this new house works its way down a suburban site that descends quickly from street level to a mature bank of bush below – and further, to a modest waterway at the boundary, which feeds into Currumbin Creek.

There are two reasons that the site deserves mention at the outset. One, the slope allows for the house proper to be situated well below street level, ensuring an added degree of seclusion in what is already a quiet neighbourhood. Two, while the street level allows views over the picturesque upper Currumbin Valley and its low-key moments of suburban build-up, up to and over the Queensland/New South Wales border, the central living space of this house is bush-bound. Wall-length glazing (facing west-south-west) extends this living space to a wall of established growth, so that the entire zone in which family life is conducted – including the sizeable pool embedded in the hillside, the atrium patio and the expansive living area – is at once fluid and contained. One moves easily from room to room, from the dining table to the poolside butterfly chairs, with a wall of sliding doors able to be stacked out of the way. But this movement is within limits set by the house itself, informed by architect Matthew Eagle’s response to the site.

In some respects, the house evokes the mid-century domestic work of Hayes and Scott, or Douglas and Barnes. Not in its forms, as such, but in its attitude: a clear product of architect and client figuring out the best way to arrange those things the family regards as important. Their modernism is referenced in a clever, economical use of blockwork and timber around the entrance (the garage sitting on a street-level pad, a stair leading down to the atrium patio) and from the street view, with its low, apparently ground-hugging forms and restrained roofline. Simple gestures give texture to otherwise stark block walls. The scale is grander, of course, and the finish more sophisticated, but there is a conversation with earlier work played out, too, in fenestration and the management of natural light.

The house captures something of the established relationship between Matthew and joiner Josh Brady. The Brady family commissioned the house, and Josh’s hand registers in the extensive use of timber throughout the project – from panelling, to the window casings, to the house-wide storage system that is as subtle as it is enviable.

Curiously, the widespread use of both poured concrete and blockwork grounds the dwelling as much as the timber that lends balance to the dominant palette of materials. The house is something to be claimed back by nature as a device through which to locate the family in a kind of pre-suburban site condition. The relationship between the bush at the property’s western edge and the main living space is an obvious example of this, but it is not isolated. Before the house was built, this block was one of the last pathways in the area for wildlife to move from the creek and bush up to what was until relatively recently a sparsely built extension to the established (if sporadic) sprawl of the coastal suburb of Currumbin. A pathway along the edge of the property enables wallabies to continue moving up and down the hillside, a concession to nature that compounds the sense that this is a dwelling in the bush, but distinct from the bush.

Pragmatically, fire safety considerations have helped to shape the extent of the building, serving as a reminder of precisely this distinction and its necessity. Read from a different direction, and in the wider setting of the city in which it sits, this residence is not a rural or nature-bound dwelling so much as a suburban house in the process of staging an escape from suburbia.

In photographs the house is not especially heroic. It simply does not call for any form of amplification. Its architectural qualities rest in simple relationships that have been carefully thought through – between materials and elements of programming, along sightlines and over the course of the site. It aims at a kind of straightforwardness that remains in play even as it is undermined by the extent and scale of the house itself.

This house adds to a growing body of domestic work by Matthew Eagle that will prove increasingly important to the Gold Coast and the cross-border region in which it sits.

Other
Custom joinery by Mosh Design and Construction; furniture from YON 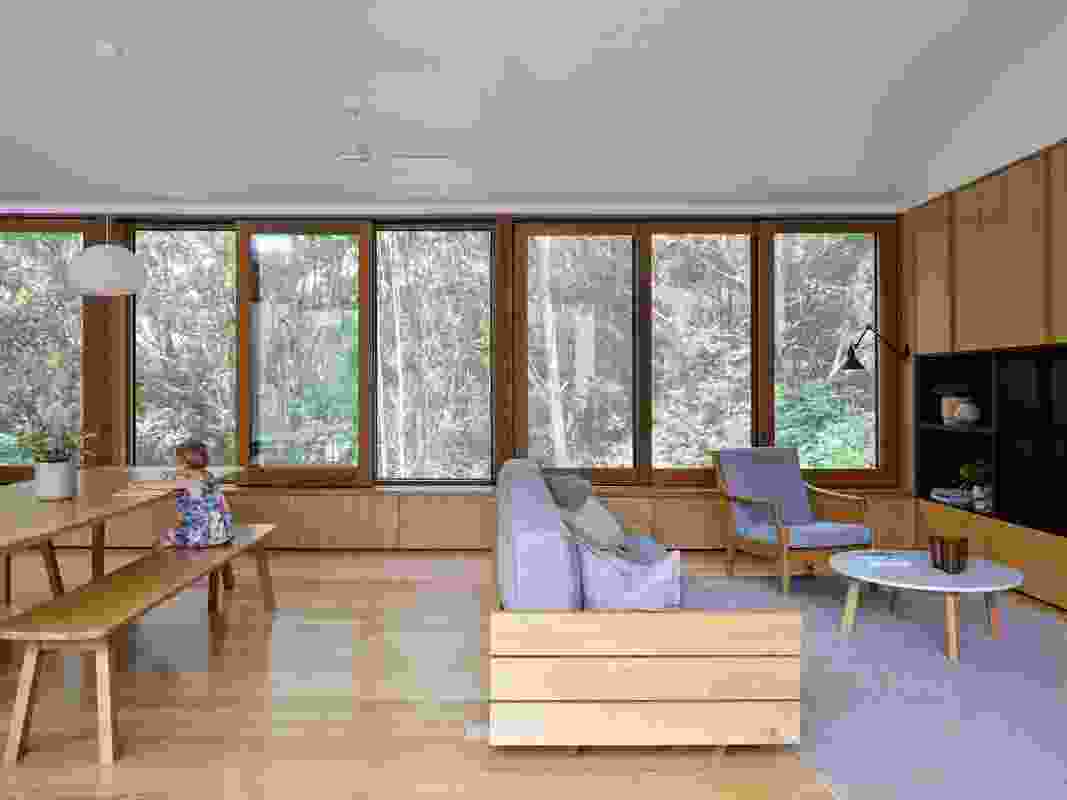 The primary living space in Tierney Drive House is bush-bound, locating its inhabitants in a kind of pre-suburban site condition. 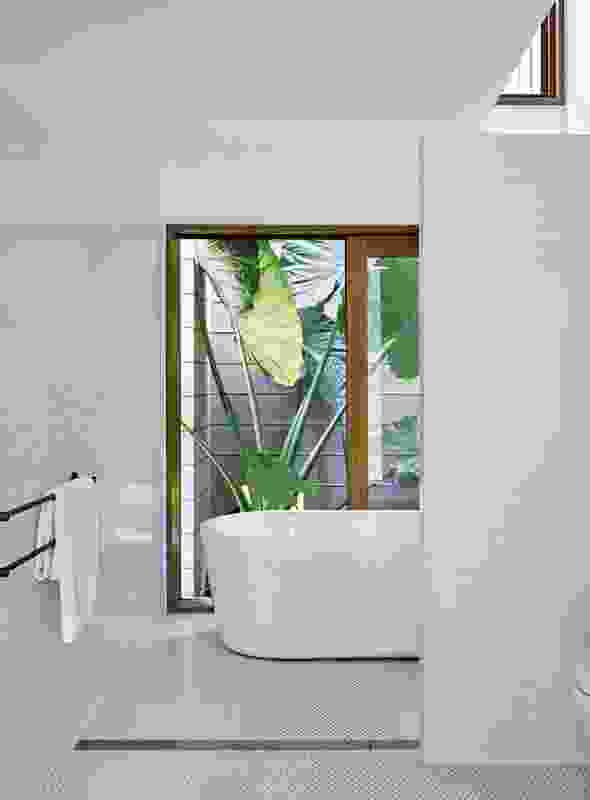 The home’s clever fenestration and management of natural light is typical of the architect’s earlier work. 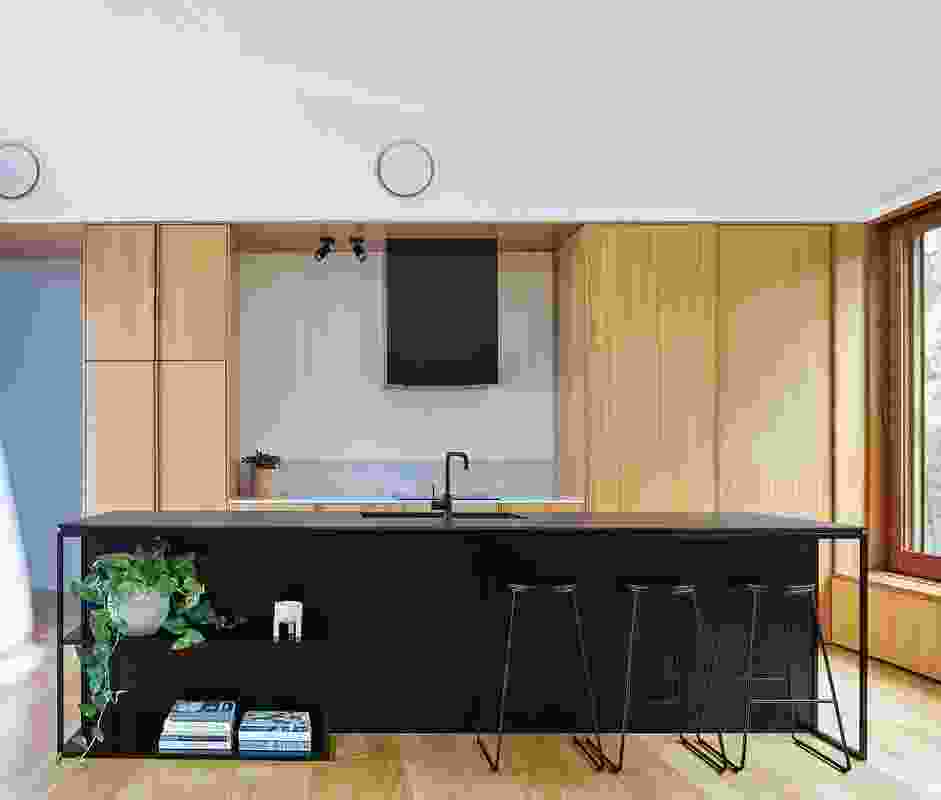 The owner, who is a joiner, crafted the home’s comprehensive blackbutt detailing. 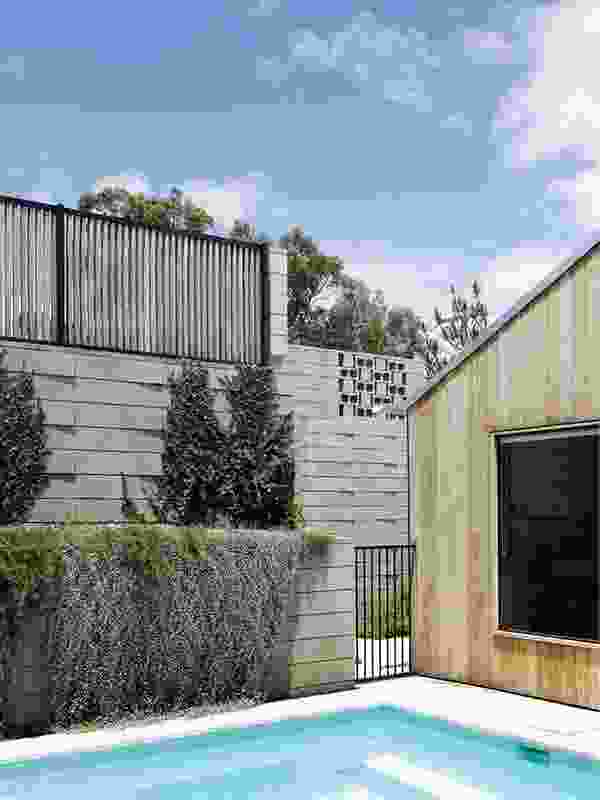 Embedded into the hillside, the outdoor room and swimming pool are bound by timber and punctuated walls of concrete block. 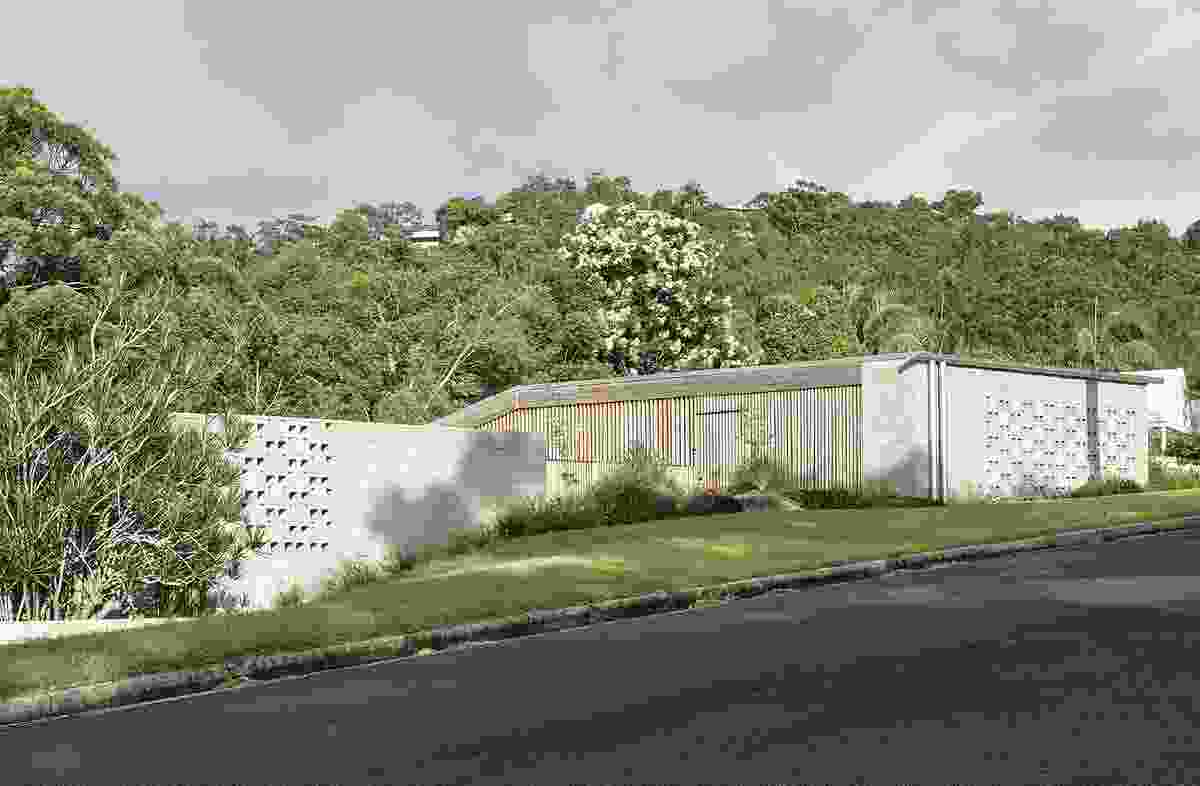 From the street, the home appears to have a ground-hugging form, set low in the steeply sloping site. 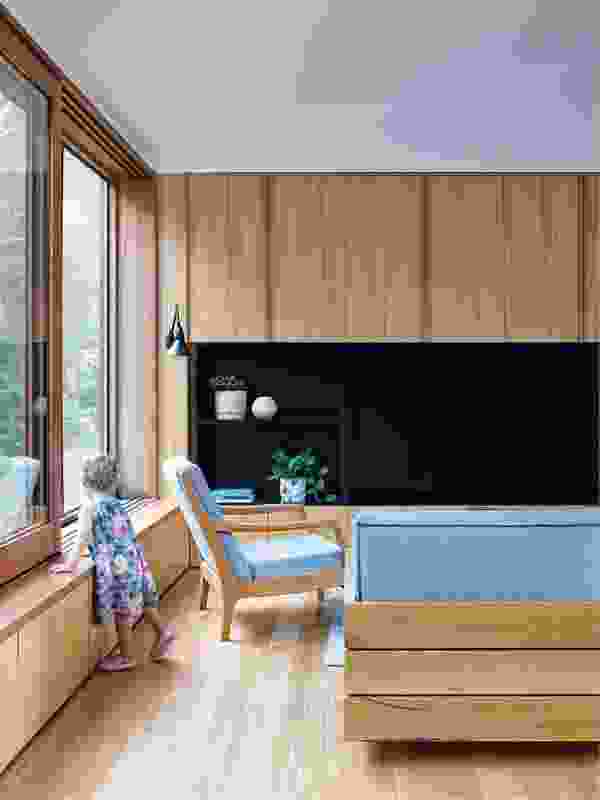 Wall-length glazing frames views from the fluid living, dining and kitchen space to a bank of mature growth.