Koo Wee Rup, 60 kilometres to the south east of Melbourne, produces over 90 percent of Australia’s asparagus.

If you’ve eaten any of the new season’s asparagus recently, it probably came from Koo Wee Rup, a small town 60 kilometres to the south east of Melbourne. Koo Wee Rup produces over 90 percent of Australia’s asparagus. The region has perfect conditions for asparagus growing, and its ancient peaty soils have a reputation for producing some of the best asparagus in the world.

Koo Wee Rup is just one of many food growing areas on the urban fringe of Australia’s state capitals that make an important contribution to the nation’s fresh food supply. The foodbowls on the fringe of cities like Sydney and Melbourne are some of the most highly productive agricultural regions in Australia.

But as these cities expand to accommodate rapidly growing populations, fertile farmland on the city fringe is at risk due to urban sprawl.

The research explores the capacity of Melbourne’s foodbowl to feed the current population of 4.4 million and the predicted future population of around seven million in 2050. The project also investigates the city’s “foodprint” – the amount of land, water and energy required to feed the city, as well as associated greenhouse gas emissions.

Early project findings indicate that Melbourne’s foodbowl currently has the capacity to supply a significant proportion of Greater Melbourne’s food needs across a wide variety of foods, including poultry, eggs, red meat, dairy, fruit and vegetables. The city’s foodbowl can supply just over 40 percent of the food needed to feed Greater Melbourne, including over 80 percent of the fresh vegetables consumed and around 13 percent of fruit.

However, we can’t be certain exactly how much of this food is currently consumed in Melbourne, because food freight isn’t tracked within the state or between Victoria and other states.

By 2050, 60 percent more food will be needed to feed a population of around seven million in Greater Melbourne, but if the city continues to sprawl at its current rate, then it is likely to lose a significant amount of farmland, and the city’s foodbowl will only be able to meet around 18 percent of the city’s food needs, including just 21 percent of the fresh vegetables consumed and three percent of fruit.

One of the long term impacts of this loss of capacity in Melbourne’s foodbowl is likely to be higher food prices, due to the increased costs of transporting and cooling foods over longer distances. Many of the foods produced on the city fringe are highly perishable – foods such as leafy greens, broccoli, mushrooms and berry fruits. These foods have historically been grown in market gardens on the city fringe close to consumers, and they require energy-intensive refrigerated transportation to reduce spoilage.

Another likely impact of reduced capacity in the city’s foodbowl is increasing vulnerability in Melbourne’s food supply. Both global and local food supplies are becoming more volatile, with significant impacts from climate change. Droughts, storms and floods are increasingly likely to affect our food supply. To maintain a stable and resilient food supply in the future, cities need to have the capacity to source fresh foods locally, as well from national and global sources.

Australia produces a large surplus of some types of foods, exporting around 60 percent of all food produced. Australia has an enviable capacity for food production, but our perception of the nation as a land of plenty masks vulnerabilities in future food supply.

Less than 10 percent of Australia’s land is suitable for agriculture, and only a small proportion of this land has the type of soil and water access that is appropriate for growing fruit and vegetables. Much of it is on the coastal fringe of Australia around our major cities.

As Australia’s cities expand to accommodate rapidly growing populations, urban sprawl could mean that locally grown fruit and vegetables become scarcer in future. Cities such as Melbourne and Sydney need to plan now for how to feed their growing populations by introducing measures to protect their urban fringe foodbowls.

One of the ways that we can all contribute to protecting our city foodbowls is by buying from the producers who farm there, what Michael Pollan calls “eating the view”. It can be difficult to know where fruit and vegetables in supermarkets are from, but farmers markets and local vegetable box schemes offer a way of buying locally grown fruit and vegetables.

Foodprint Melbourne is a joint project between the Victorian Eco-Innovation Laboratory at the University of Melbourne and Deakin University. These early project findings have been released as an infographic, and a full report will be made available in November 2015. For more information, see the project website. 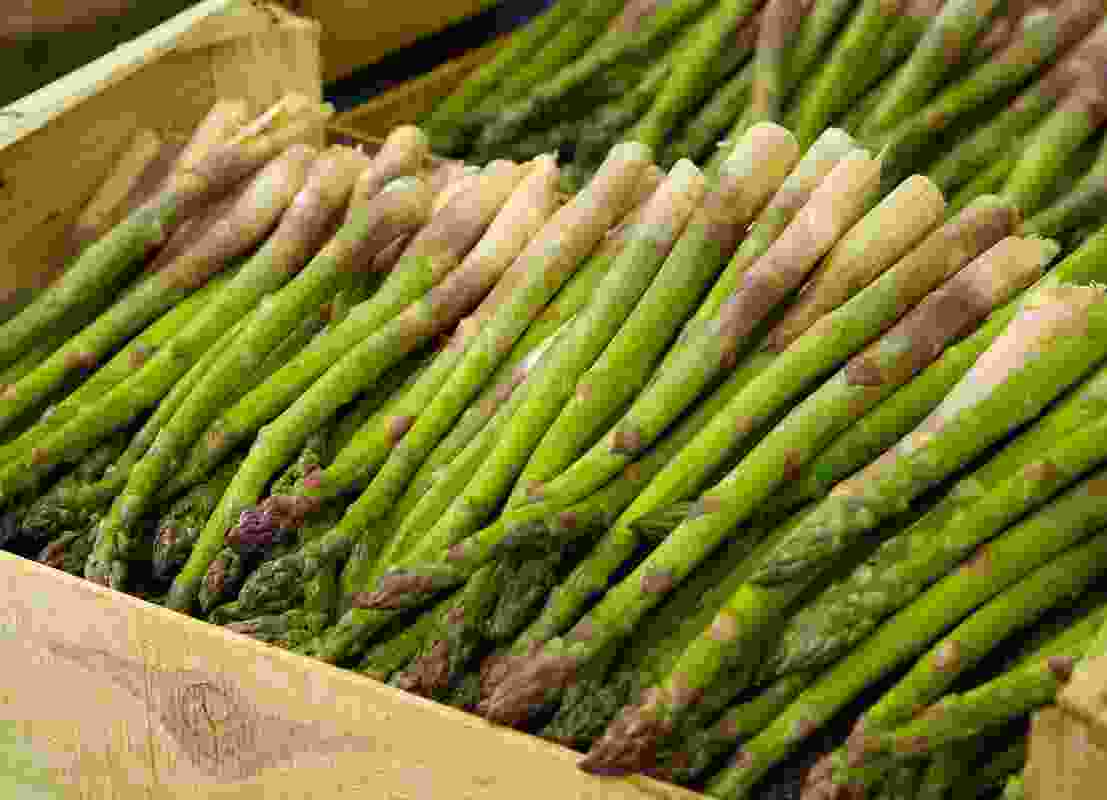 Koo Wee Rup, 60 kilometres to the south east of Melbourne, produces over 90 percent of Australia’s asparagus.