Hovering above the garage of a terrace house, this unassuming studio creates a calm space to listen to and make music, while also breathing life into an existing courtyard.

The studio presents a modest facade to the rear lane, but adopts a more playful form to address the existing house.

Each alteration is a ‘retelling’ of the building as it exists at a particular time – and when the changes are complete it becomes the existing building for the next retelling” – Edward Hollis, The Secret Lives of Buildings.

Every house has a story. Treetop Studio by Aileen Sage Architects tells one of evolution and is the product of a growing family. The terrace house in Sydney’s Paddington was purchased in 1988 by the client, Julien, and at the time perfectly fulfilled its requirement as a bachelor pad. Over the course of thirty years the house has undergone significant change, to now accommodate a family of four, including Lars the dog. The most recent addition to the family resulted in the conversion of Julien’s study to a nursery, which subsequently led to the treetop studio brief to Aileen Sage Architects.

Architect Amelia Holliday, who co-founded the practice with Isabelle Toland, reflects on the client’s original brief. It called for a single room in which to work – one that was “a bit special and different.” First and foremost the space was to embrace Julien’s passion for music: “The space needed to accommodate him playing instruments and listening to music … ultimately [they wanted] a workplace that provided separation from the house,” Amelia says.

The project occupies a dual-frontage site, and the studio directly engages with the rear service lane. Much of the envelope expression was driven by the need for the house to conform to the local council building requirements. The practice identified the key challenge as crafting something special within the quite specific contextual parameters. The unassuming white facade and small central window are a direct product of these requirements and form the new rear lane address.

The studio hovers above the garage, anchored by a red steel foot that houses the stair access. On such a narrow site, the stairs play an important structural role in bracing and assisting to, quite literally, get the most out of the studio space. Ascending the stair you are immersed in colour, a deep burnt red. Upon arrival to the studio the staircase folds to form a balustrade, offering a backdrop to the client’s impressive guitar collection.

True to its name, the studio opens itself up from the stair into a light-filled space nestled in the treetops. Contrary to its rear lane presence, the interior of the studio repositions itself to embrace views out into the canopy, across the courtyard and back toward the house through a white battened screen. The site’s east–west orientation, characteristic of the Paddington location, posed sun-shading issues. Amelia says this was overcome through the design of a series of fixed blades: “These allow a soft, dappled light quality in the working space and assist in ensuring privacy to the neighbours.”

Access to natural light was also a key requirement for the client. “One thing that used to really get me down about the house is that it is really dark … it was important to have a space that celebrated light,” he says. Aileen Sage Architects provided a large skylight above the stair, which allows light to flood into the space. A minimal selection of materials, including blonde plywood floors and joinery, white walls and generous glazing, work to complement and celebrate light, creating a sense of calm.

In addition to the new studio a number of discrete alterations were made to the existing house. Namely, a new coat of paint externally, a very impressive pivoting glass door connecting the courtyard and living space and a pair of white awnings. It is obvious that the clients appreciate the contribution these small additional works make to consolidating the house. “A new life has been brought to the courtyard … it’s much more homely now,” says Julien.

In the courtyard there is a lovely play of colour; a happy blue to the existing house, a burnt red to the studio stair and the future green of the garden, which has become the new heart to which the house and studio are focused. Amelia shares the process of carefully selecting the colours with the client, which are reminiscent of the couple’s shared travels through Norway. Julien selected the blue to match tones of the Bergen landscape and Gretchen selected a burnt red matching the natural pigment of traditional Norwegian farmhouses.

The outcome very fittingly and carefully knits itself into the ever-evolving narrative of the house and family. There is clarity to the work, which can be attributed to the relationship that developed between the client and architect; one of mutual trust and a shared appreciation of the design process. The Treetop Studio undoubtedly provides a delightful place to work and make music that is separate to, yet also intimately connected to, the home across the courtyard. 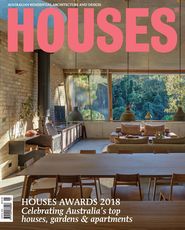 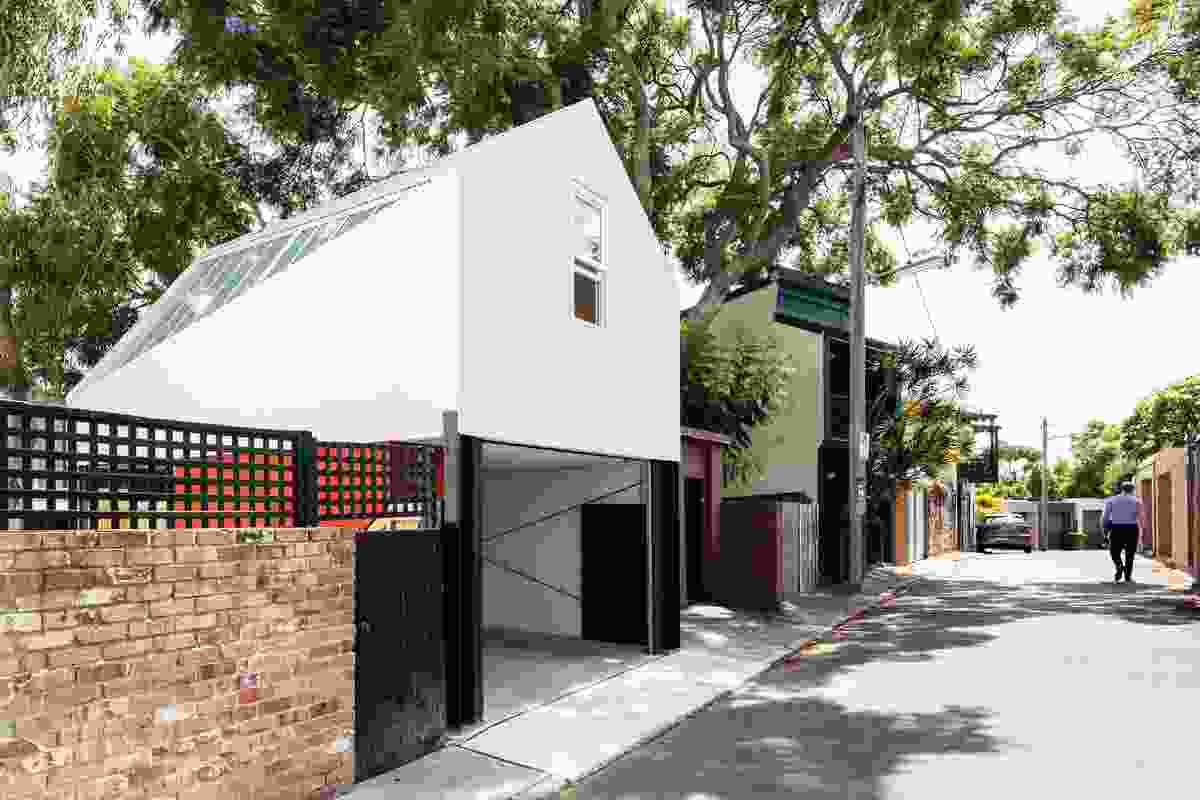 The studio presents a modest facade to the rear lane, but adopts a more playful form to address the existing house. 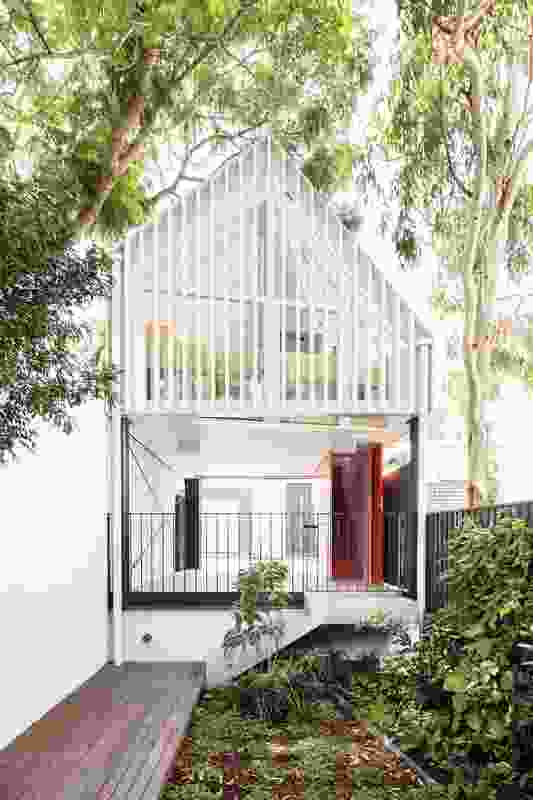 Filled with soft, dappled light, the treetop studio embraces views out into the canopy across the courtyard. 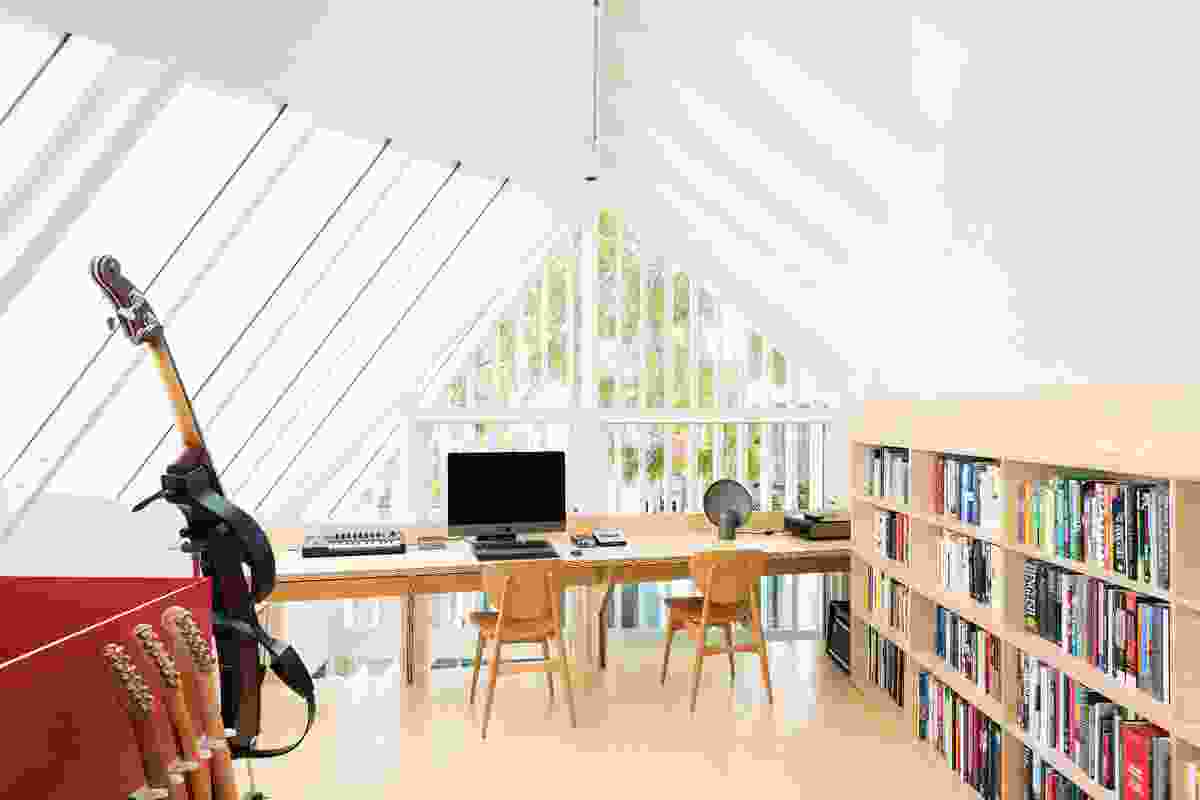 A minimal palette of blonde plywood and white paint complements the abundant light to create a calm space. 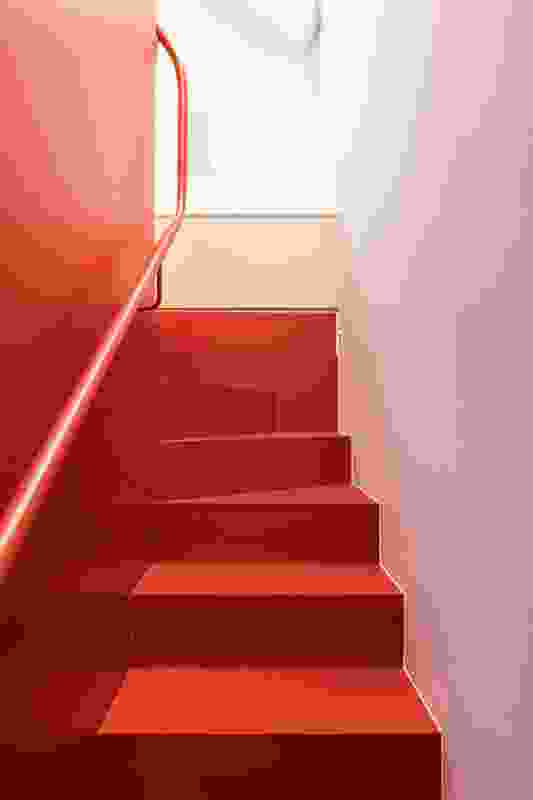 Painted in a deep burnt red, the stairs play an important role in visually and structurally anchoring the studio.