The house opens onto an elegantly designed courtyard with a garage and studio beyond. Artwork: Linus Bill and Adrien Horni.

In the current and urgent discussions about the density of Australian cities, the models for urban infill, highrise nodal points or development corridors are too often developer-driven, cost-cutting, sub-quality misadventures that can leave us anxious about our future urbanscapes and civic communities.

Politicians, planners, councillors and developers might learn much from an infill project like Two Wall House in Lilyfield, Sydney. Woods Bagot principal and design director Domenic Alvaro designed the home for himself, his partner Sue and their two daughters.

It’s a gem of a house – light-filled and spatially expansive, unfolding TARDIS-like behind a small and discreet facade just 3.7 metres wide. It nestles in beside a grander, older two-storey terrace house. Steelwork details in the balustrading and fencing hint at a connection between the two properties. A zinc-clad roof slopes back from the frontage, disguising its modernity, which, on closer inspection, is given away by the seamless design detailing of the timber, glass, steel and stone and an over-scaled dormer window above.

The project was a collaboration between Domenic and a friend. They bought the terrace house, which sat in the corner of a large block of land, with a plan to create two properties – one for each of them. The existing house took up 4.85 metres of the street frontage, leaving a sliver of land running down the side not quite wide enough to build a house that would make financial and architectural sense.

The idea that unlocked the entire scheme was to excavate into the existing house by 700 millimetres, keeping the original Victorian facade intact and creating a new party wall that democratically gives each property an equivalent width of 4.2 metres. Immediately behind the narrower facade of the new dwelling, the interior extends across to the new party wall, taking advantage of the extra width. The additional 700 millimetres – about the depth of modern joinery – allows enough habitable space for a comfortable home. The spaces have been masterfully arranged between the two long boundary walls, primarily using joinery to define rooms and living zones.

At the front is a compact and elegant sitting room. A frangipani tree filters light through the large glass wall, which can be made private with roller blinds. This doubles as a guestroom, where furniture can be shifted to the edges and a bed pulled down from the dark timber joinery wall. It’s a European-scale solution to hospitality. A pivoting door creates privacy and just beyond it is a powder room tucked beside the stairs.

From here, the house expands with space and light, and a very “Australian” feel is strikingly evident from the front door. It’s rare to walk into a narrow row house and see so much light ahead. A long white wall, unadorned except for art that will continue to be collected over time, takes the eye through the house to the courtyard beyond. Two layers of skylights, one at the edge of the upstairs corridor and another in the roof above it, allow daylight to flood down the wall. Sculptures cast shadows and the shifting sun creates its own play of light.

At the entry the ceiling height is 2.7 metres. From here the house steps down under a constant ceiling plane so that by the time you’re at the courtyard edge, it’s nudging four metres. It’s a lovely spatial sequence, moving from the compact scale of the front room to the expanse at the back, and the home has all the amenity of a luxurious open-plan apartment but with a grand sense of height and space. Vast sliding doors open onto the courtyard, elegantly designed by Daniel Baffsky of 360 Degrees Landscape Architects. Here, architectural detailing, considered materials and planting provide a mix of textures and tones. There is a plunge pool and finally a garage with Domenic’s studio above it.

Domenic defines this main living space with floor levels, joinery and accomplished detailing. The kitchen and dining table are on one level, and a few steps down is the living area with a large sofa. White joinery walls provide ample storage for day-to-day living and darker oak joinery provides visual contrast and marks out a different amenity – a wet bar with Domenic’s whisky collection, for instance. This works as a family and entertaining space, accommodating kids, guests, meals, drinks with friends, television and lounging.

The stairs to the upper level, immediately behind the front room, are formed from eight-millimetre steel (like the stairs in the garage/studio), another way to save space that might otherwise be taken up by walling and add a modernist material quality. Upstairs, under the dormer window, is one kid’s room. Then a large bathroom beside the stairs, a second child’s room and finally, behind a pivoting door, the main suite with large wardrobe walls for Domenic and Sue, and an ensuite off the bedroom.

Domenic likes to experiment with housing models in urban spaces. His previous home was a multi-level project built on a 47-square-metre block in inner Sydney. It won him accolades and a World Architecture Festival award in 2011. This one, a different typology for filling in urban space, is just as accomplished.

Doors
Custom timber doors, designed by the architect, manufactured by the joiner. 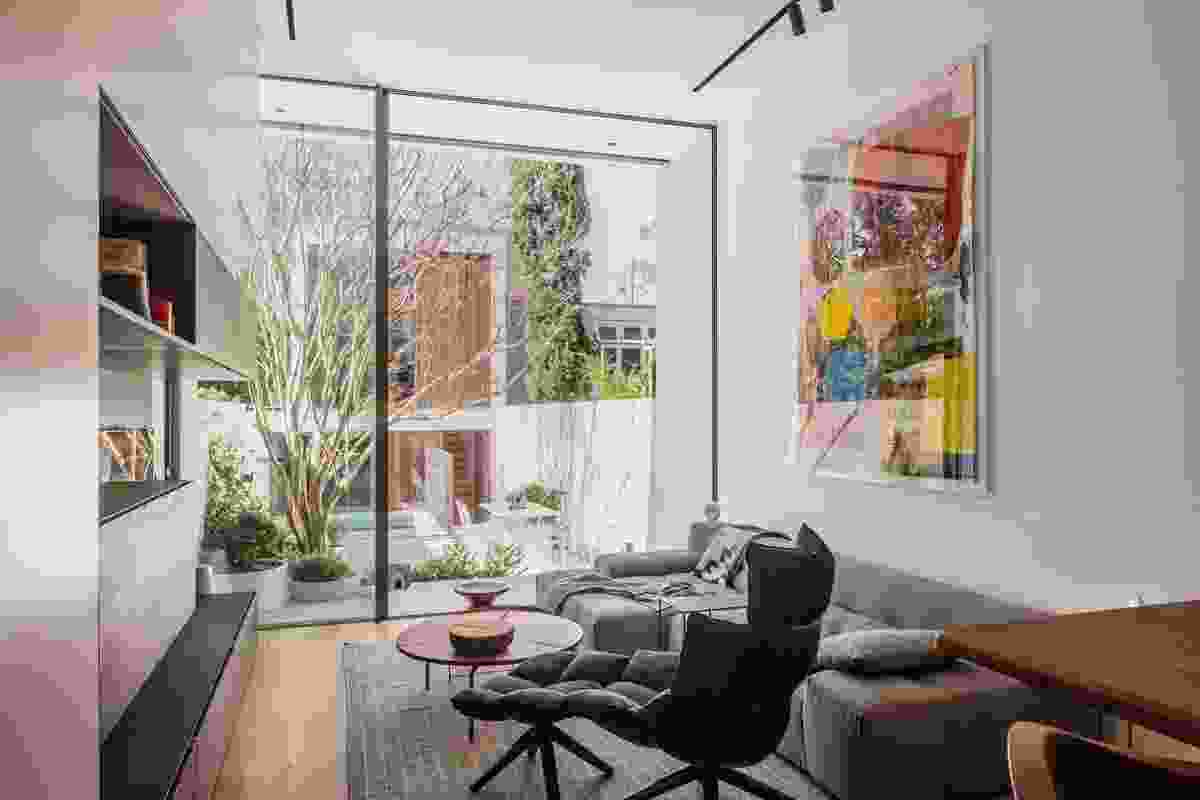 The house opens onto an elegantly designed courtyard with a garage and studio beyond. Artwork: Linus Bill and Adrien Horni. 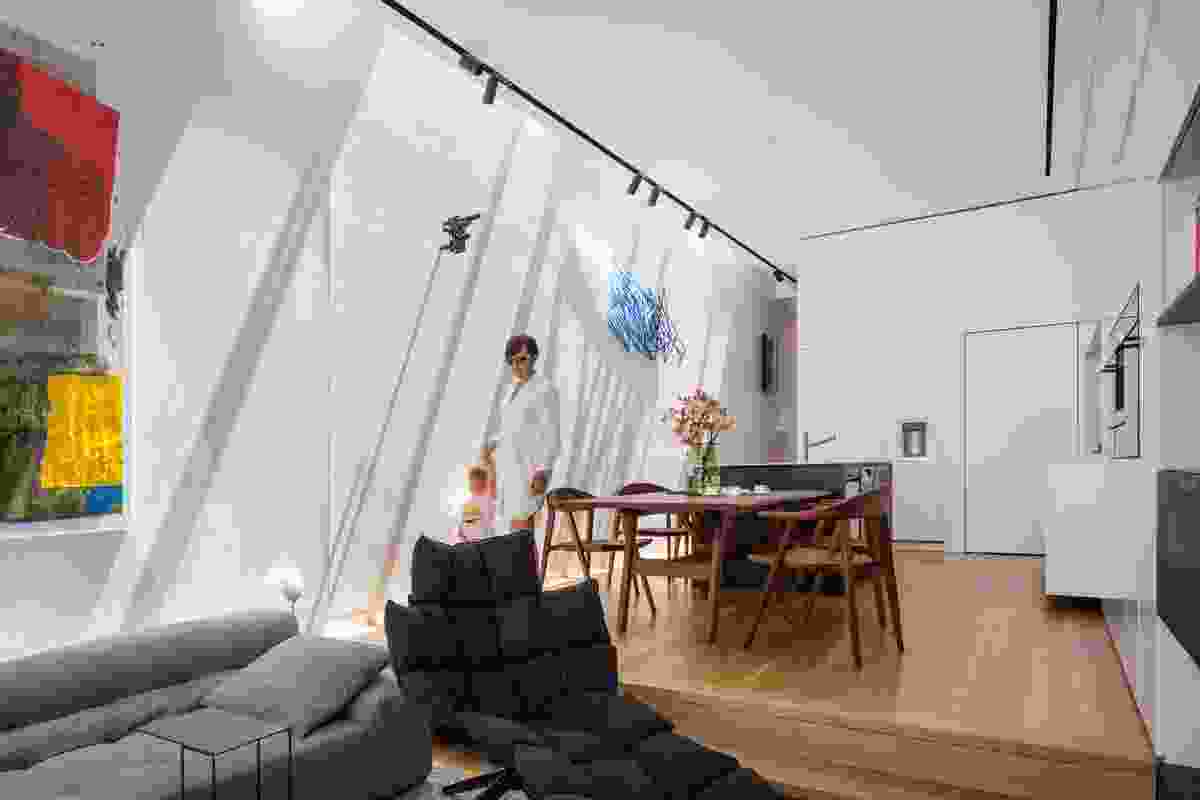 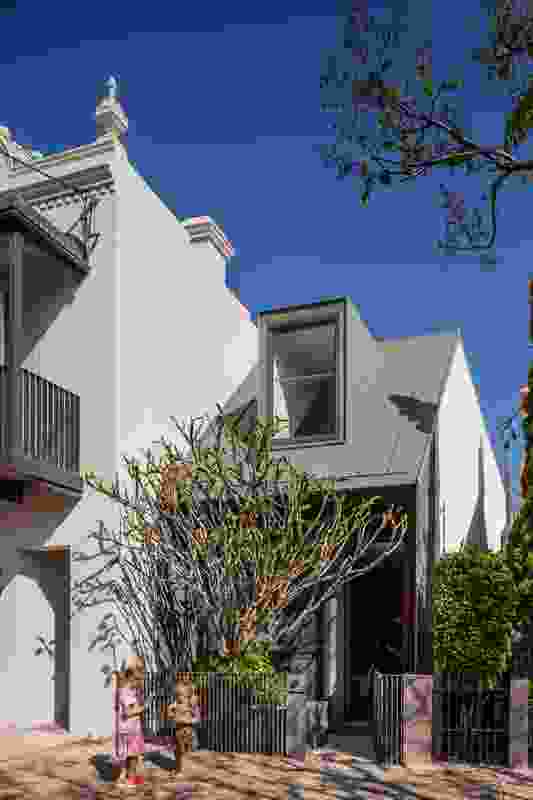 A zinc-clad roof slopes back from the 3.7- metre-wide frontage, momentarily disguising the house’s modernity. 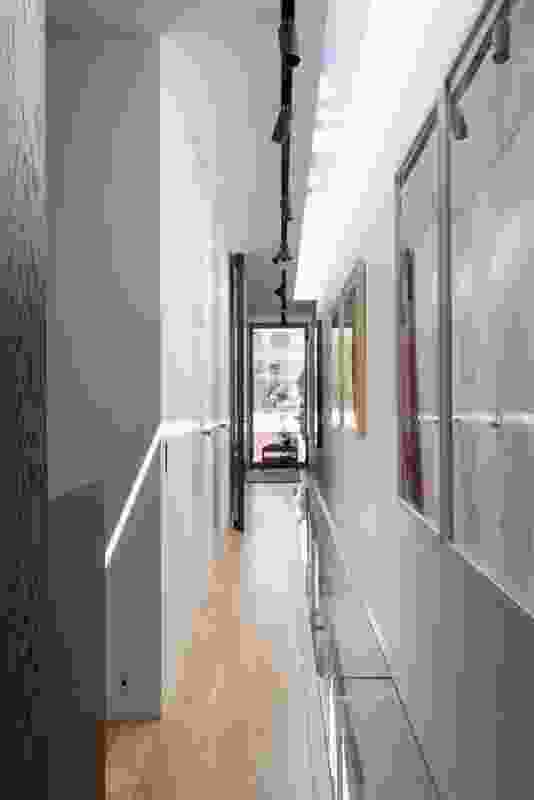 A long white wall, carrying the clients’ expanding art collection, draws the eye through the house to the courtyard. 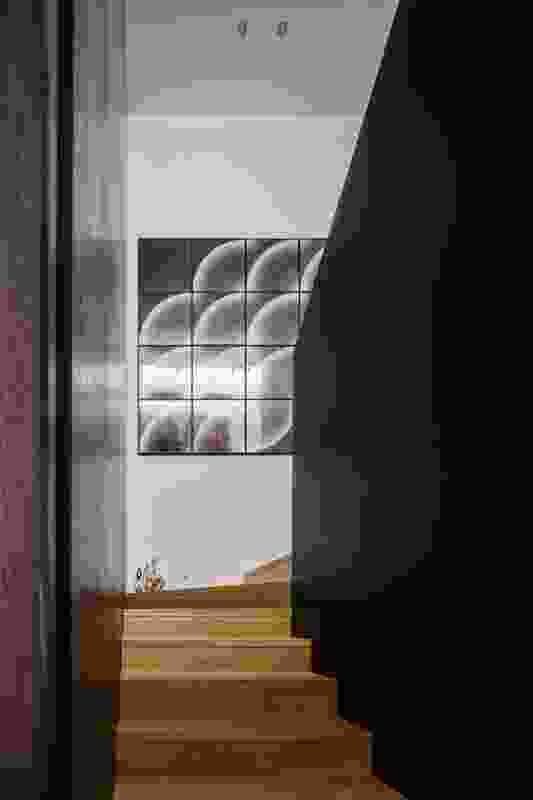 The stairway, designed for efficiency of space, brings a modernist material quality to the house. Artwork: Norman Carlberg. 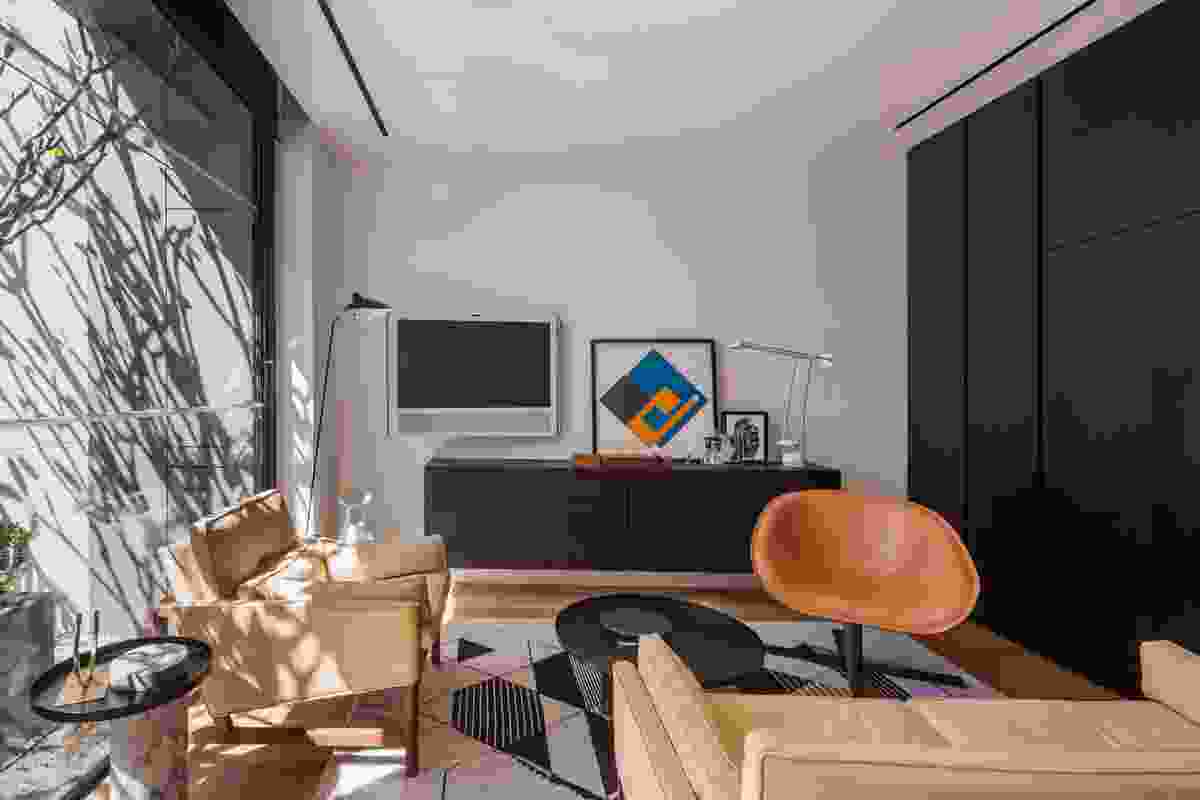 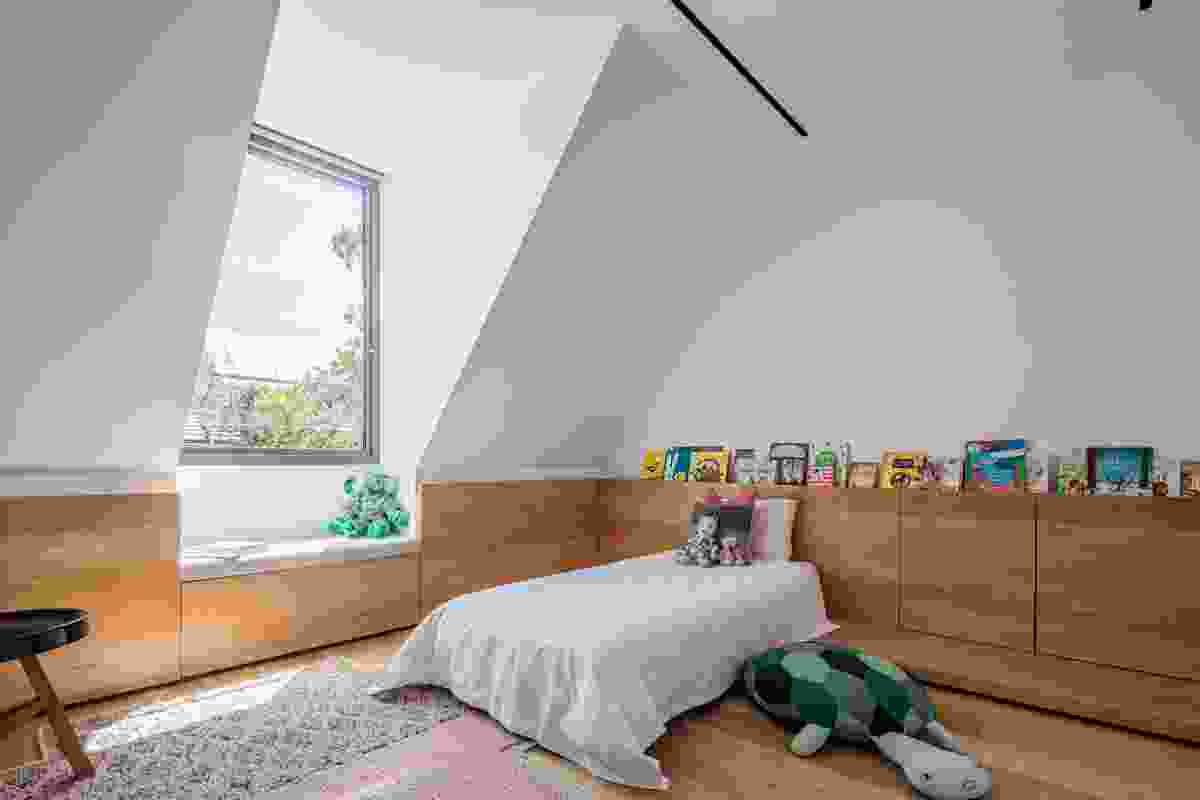 An over-scaled dormer window provides a place to sit and brings light into a child’s bedroom. 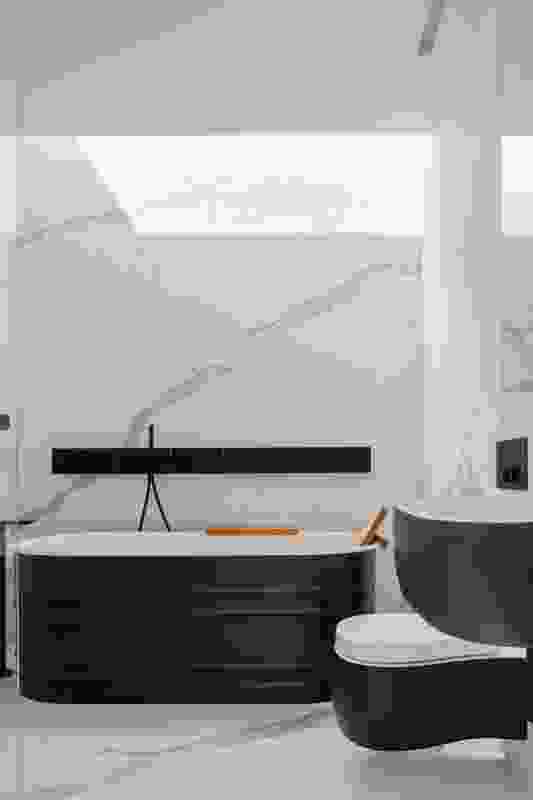 High-quality materials and architectural detailing contribute to a sense of expansion in this urban infill project. 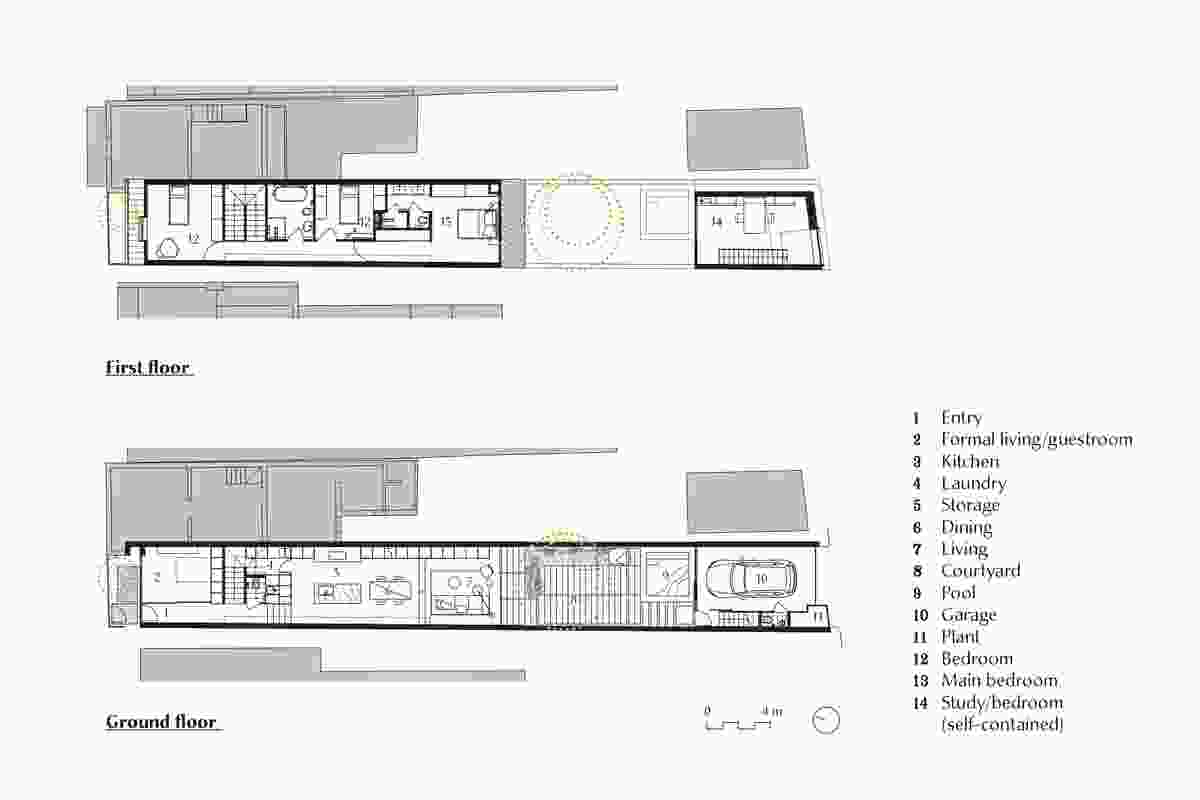 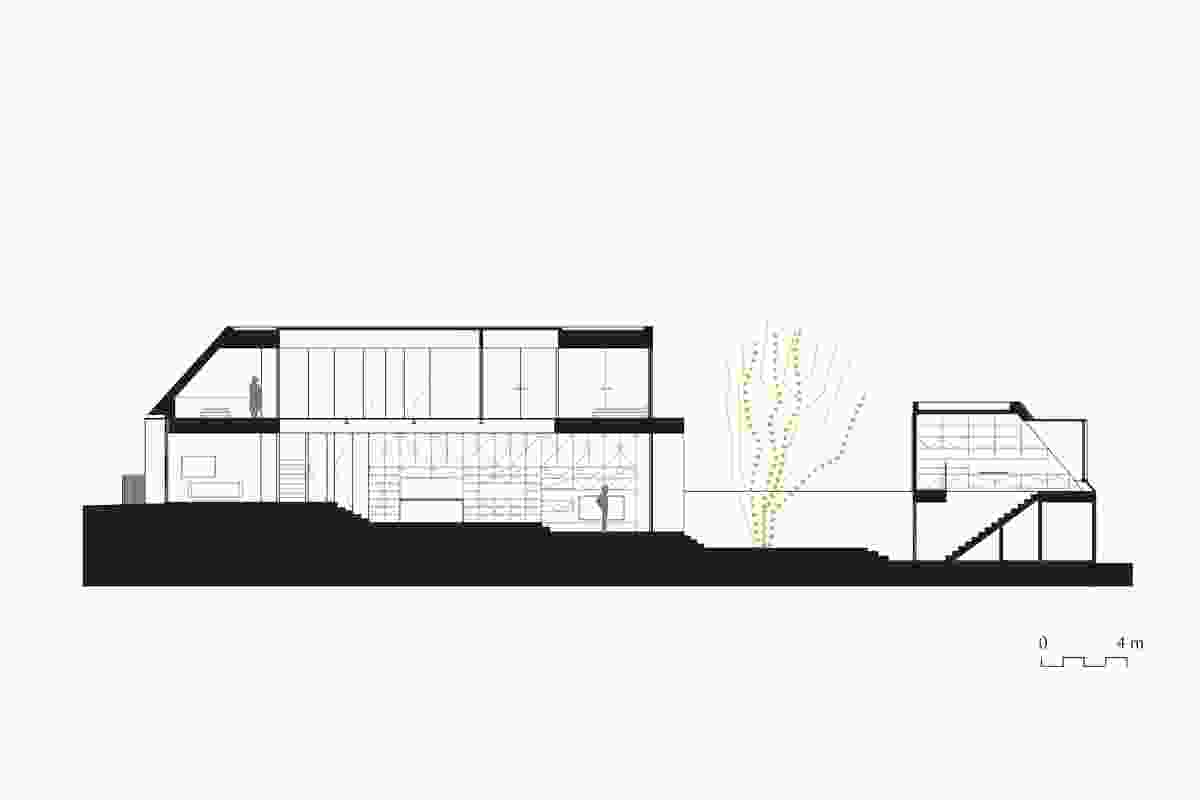