Typological [r]evolution of the workplace

Philip Vivian charts the various typologies of the workplace including the current type: the knowledge economy and humanization of the workplace, then asks: 'What’s next?'

Large floor plates, use of glass and lines of workstations at the ICI House office building in Melbourne, 1958.

Throughout the twentieth century, changes in technology and management theory have resulted in the continual evolution of the workplace. While these changes have stimulated the evolution of new building typologies, the latest and arguably most fundamental shift in workplace culture has curiously triggered a reappraisal and reworking of the post-World War II side core office typology. To understand the current workplace model, it is important to first understand the evolution of the workplace through the twentieth century, and how each typology emerged from the managerial character and technology of the time.

Early twentieth century – systematization of the workplace (the Taylorist office)

The early twentieth century workplace was influenced by a management theory known as Taylorism, which focused on the scientific management of labour management. Workers completed clerical tasks under supervision, resulting in a dehumanized workplace that was hierarchical, reinforced status, and separated people and functions. Success was measured in terms of efficiency. Limits of building technology had a significant impact on building typology. Vertical transportation was in its infancy, artificial lighting was ineffective and load-bearing structural systems were required. The result was narrow-plan buildings designed to access natural light and accommodate limited structural spans. The interior was characterized by offices along double-loaded corridors and the serial repetition of desks in open plan areas.

The post-World War II period saw a growing interest in subjective aspects of human relations. Emerging research into interpersonal relations and employee motivation showed that improving social networks enhanced staff morale, in turn increasing motivation and productivity. Workplaces began to offer spaces focused on the comfort of workers. As a result of managerial changes, work was organized into task-based groups, and office space was structured around clustered groups of individual workspaces. The Taylorist separation of managers and workers continued. However, glass-enclosed offices were introduced to enable continuous visual contact. The introduction of curtain wall facade technology had a major effect, with glass facades increasing visible light on a floor plate. Corresponding technological advances in heating, ventilation, airconditioning, fluorescent lighting and suspended ceiling systems created the ability for a uniform distribution of energy and light, which enabled deeper floor plates.

The flexibility created by open plans and side cores, and modularity of building structure and facades, was abandoned by the late 1960s, with the introduction of unobstructed continuous deep plan floor plates, known as Bürolandschaft, or literally “office landscape.” This concept was created by the German management consulting firm known as the Quickborner Team, who studied office layouts in terms of information processing and paper movement. The aim was to promote communication between workers, eliminating hierarchy and status, in line with prevailing social and political changes. Interior subdivisions and walls were eliminated, creating the first totally open-plan office areas, with maximum flexibility. The depth of floor plates increased to provide maximum contiguity between people. Office landscaping was introduced to counter the resulting disconnection from the outside world. Cores were evenly distributed across the floor plate to provide uniform services, or located on the periphery to minimize obstruction.

1970s to 1990s – the professionalization of the workplace

The rise of the white-collar workforce shifted the dominant workplace from corporate headquarters to professional consulting firms, leading to a proliferation of speculative office buildings. The increase in professional staff created a demand for rectangular or square buildings that maximized the perimeter for cellular offices. Instead of large open floor plates, a shallower, consistent depth from core to outer wall was preferred. Technological influences included column-free floor space and the standardization and commercial availability of proprietary facade technologies.

Twenty-first century – the knowledge economy and humanization of the workplace

Rapid changes spawned by information technology have eroded the conventions of the traditional office. Offices are now less hierarchical, and physical barriers have been removed to promote communication. Workplace culture encourages interactive, complex, open-ended teamwork. In contemporary workplaces, up to 50 percent of the area is often allocated to social and interactive space. This shift coincides with a new awareness of the environmental effects of global warming. New technologies such as chilled beams, spectrally selective glass, recycling, and renewable energy seek to minimize the use of resources. Large flexible floor plates with deep plans and large column spans provide contiguous spaces to maximize interaction. Atriums and stairs provide vertical interconnection between floors. Interestingly, the latest workplaces have rediscovered the flexible open floor plate of the Bürolandschaft and side core typology of post-World War II; in effect completely reversing the dominance of the central core. Corporations have completely reappraised their workplace requirements, shifting the value of global property assets. As the workplace continues to evolve, there are new directions to explore: the healthy, the intelligent, the mobile and the lifestyle workplaces.

Note: Philip Vivian is a director at Bates Smart. This article is an edited extract from a paper on building typology and workplace that goes by the same title.

Typological [r]evolution of the workplace 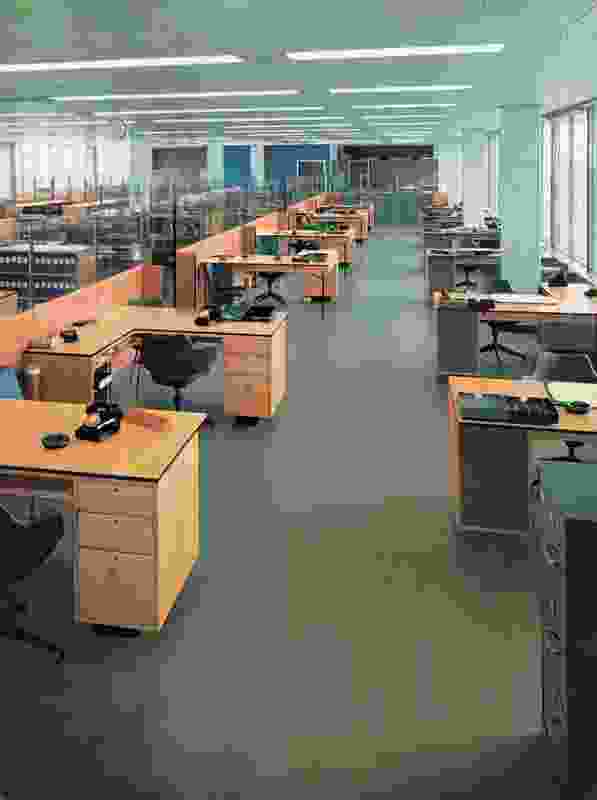 Large floor plates, use of glass and lines of workstations at the ICI House office building in Melbourne, 1958. 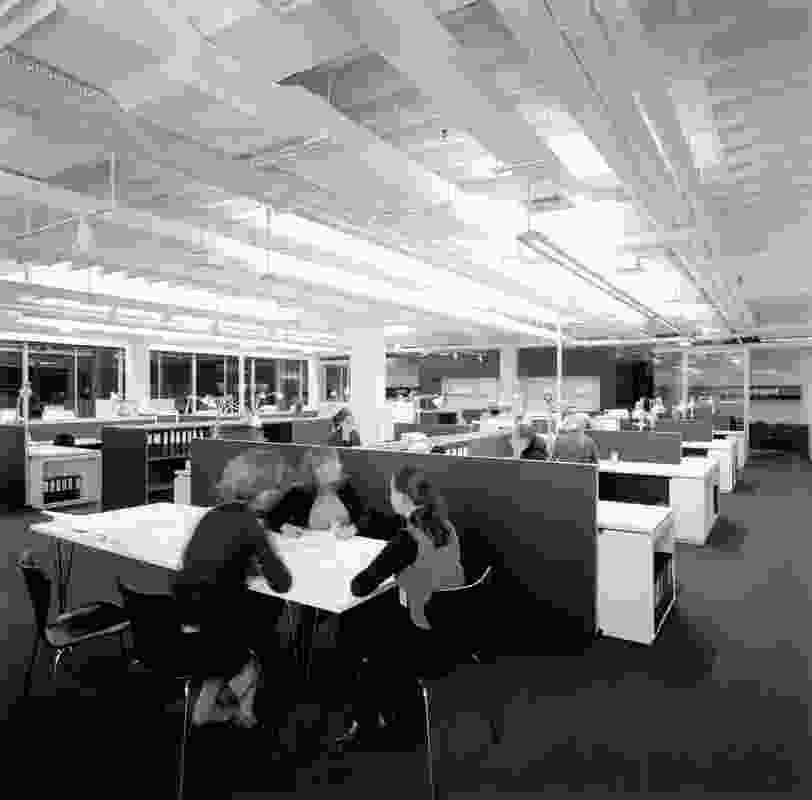 By 2006, ICI House’s interior was updated by original designers Bates Smart, to include different types of spaces, encouraging team-work.