Detailed designs for a new industry hub at University of Technology Sydney (UTS), designed by Tonkin Zulaikha Greer (TZG), are on exhibition for public comment.

The proposed seven-storey building will house a range of research projects, a start-up community and flexible spaces for the university.

It will be located at a historic education precinct in Chippendale on Buckland Street adjacent to the more than 130-year-old, Neo-Gothic former Blackfriars Public School building, designed by architect George Allen Mansfield in 1883.

TZG won a design competition for the project in 2017, and has refined the design over the following two year period.

The proposal calls for a brick building with a cascading glass wall on the south side. According to a design report attached to the state significant development application, the glass and brickwork design is a response to the form of the Blackfriars building, with the angled glass a modern reinterpretation of the Neo-Gothic architecture of the historic precinct buildings.

The glass façade has been further developed since the competition was won, with input from a number of sources including public art consultant Jennifer Turpin and landscape architects JMD, with a design that will see the façade act as both a water collection device and an artwork, with a curtain of water running along the building’s fringe.

“A methodology has been established that will achieve roof water collection, ground plane water collection and an integrated art work that celebrates rainfall as well as recirculating water for evaporative cooling during the hotter, drier months,” reads the design report.

The internal spaces, including open-plan collaborative spaces, will be arranged around a sculptural staircase.

The state significant development application is on exhibition on the NSW Major Projects website until 4 December. 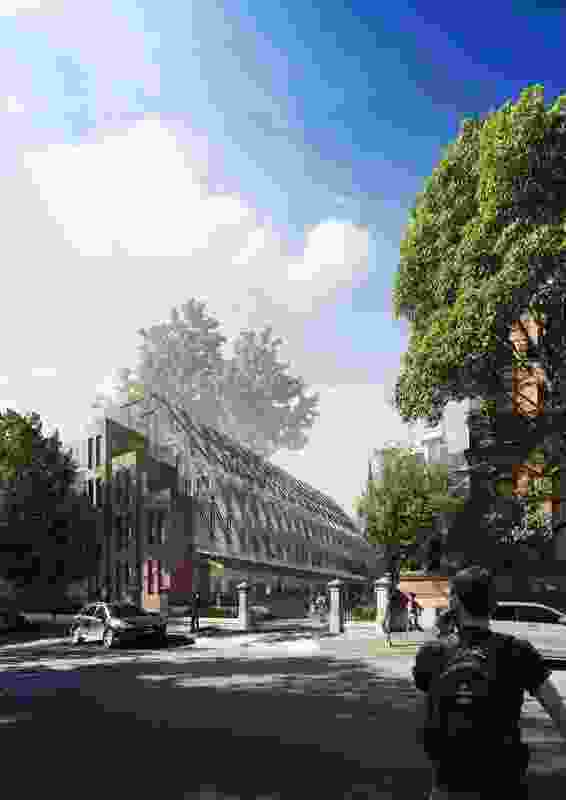